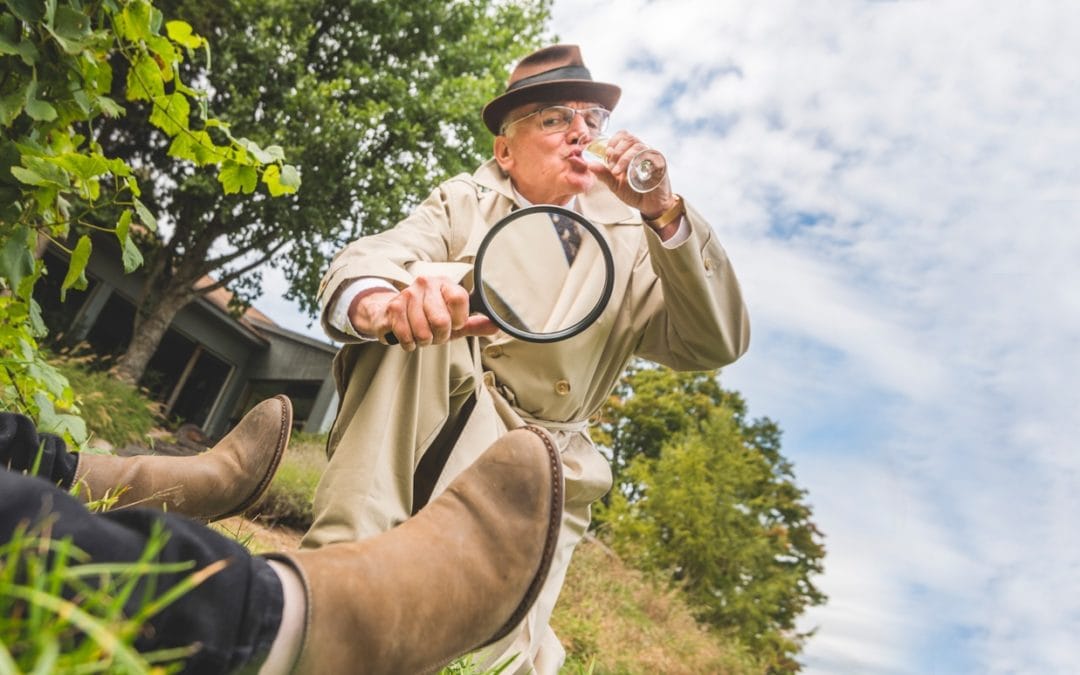 A murder in the Upper Peninsula wilderness. A corpse in a Leelanau vineyard? Bodies on the beach … Follow the man behind all the mayhem and create your own thriller-chiller adventure in Northern Michigan …

It took a slipped disc to push Aaron Stander into writing crime fiction. The longtime Detroit area English and writing professor had penned academic works and was a fan of traditional literary greats like Shakespeare and Hemingway but he says: “I didn’t read popular fiction. It wasn’t that I was snooty, I just never got around to it.”

Then one day nearly 30 years ago, Stander was changing a bearing on a vintage sports car he owned and boom … his back went and he was down for four months. To help pass the time, a friend gave him a copy of Freaky Deaky by Elmore Leonard—the Detroit-based crime writer widely acclaimed for elevating the genre. The book got Stander’s mental wheels turning.

He traveled in his memories to the many decades he’d spent riding his bike in the countryside near his family’s cottage in Interlochen—through Benzie and Leelanau counties. Riding slowly on stretches of back roads so lonely he couldn’t help thinking—If I were ever going to kill someone … 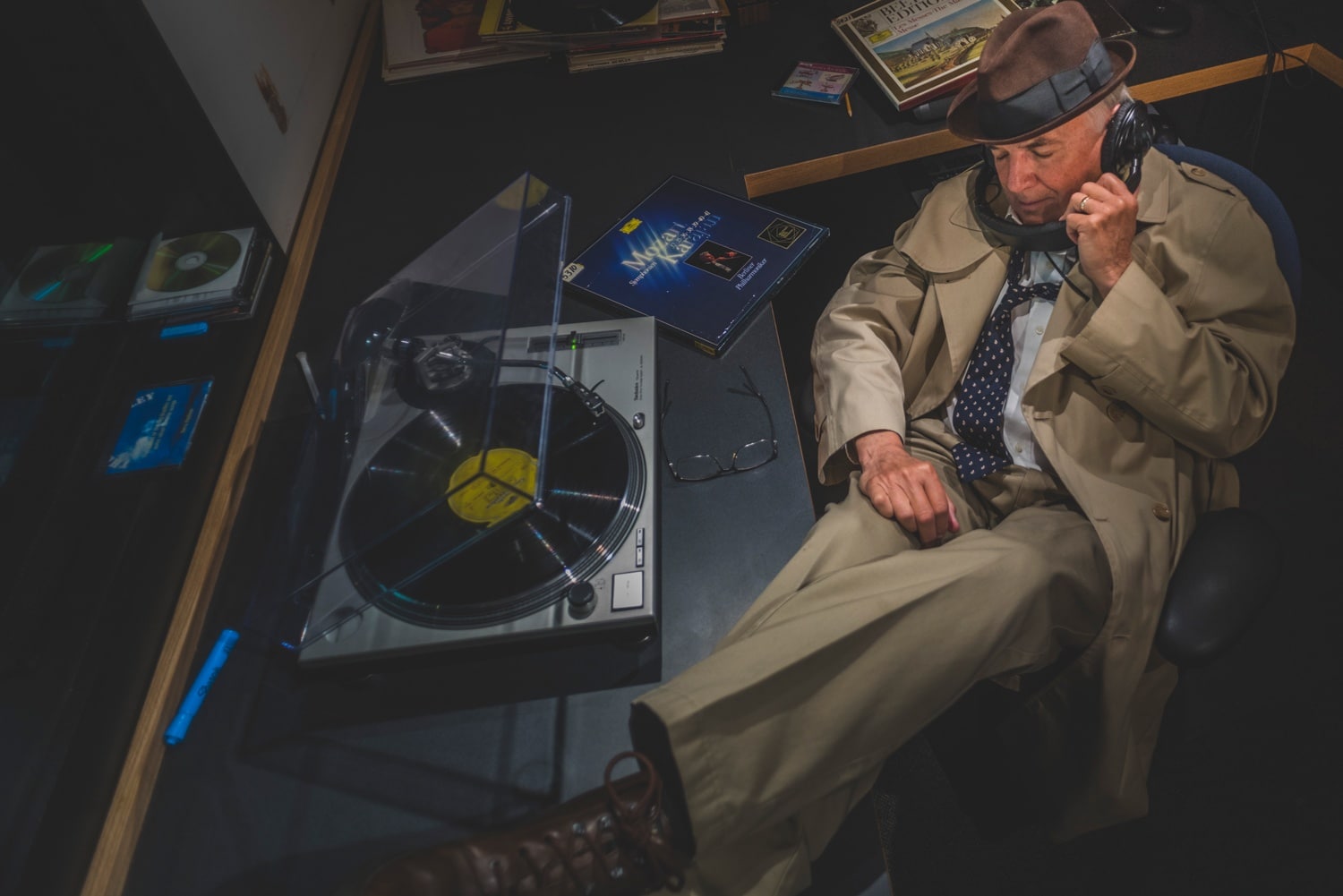 Inspired by Leonard, Stander wrote five crime scenes during his convalescence and then wove them to create the basis for his first crime book Summer People, about a gangland-style shooting somewhere in Cedar County, Michigan—a place obviously based on Leelanau and Benzie counties. Nine published books later, what would become known as the Ray Elkins series was born. Elkins being the sheriff summoned to crack cases.

The modest Stander self-published only 10 copies of Summer People—enough to give away to his kids and friends. One of those friends was Shirley Murray, then a freelancer for the Traverse City Record Eagle who reviewed the book, opening her piece with a universal truism: “A mystery set in the region visited is a travel bonus.” Murray went on to cite reading PD James’s Unnatural Causes while roaming the Suffolk coast or Ruth Rendell’s King Solomon’s Carpet while speeding through London’s underground. After the review was published, Horizon Books in Traverse City asked Stander if they could carry it. With only four copies left, Stander scurried to publish more. Within months Summer People was on the Northern Michigan bestseller list.

It’s true, finding our beloved Northern Michigan places, products and landscapes in the stories is one of the delights of these reads. Over the course of his series, Stander has become bolder about dropping real names and products into his scenes—Traverse Magazine and Mawby sparkling wine both make appearances in Murder in the Merlot, his eighth book published in 2015. He would have simply called Cedar County, Leelanau County, Stander tells me, had he not been nervous, way back when he first wrote Summer People, about offending anyone.

Stander’s legions of fans have yet to be offended. The author has honed his storytelling craft since that first book, backing the crime investigations with real-life research—much of it gleaned from a longtime friend and former deputy police commissioner of Detroit. The plots are page-turners and the characters are … well, admittedly this writer has a crush on Ray Elkins—the fictitious NPR-listening, outdoorsman sheriff who grew up in Cedar County. Care to join me as I stalk the gumshoe through some of his favorite places in Leelanau and Benzie—’er Cedar—counties? 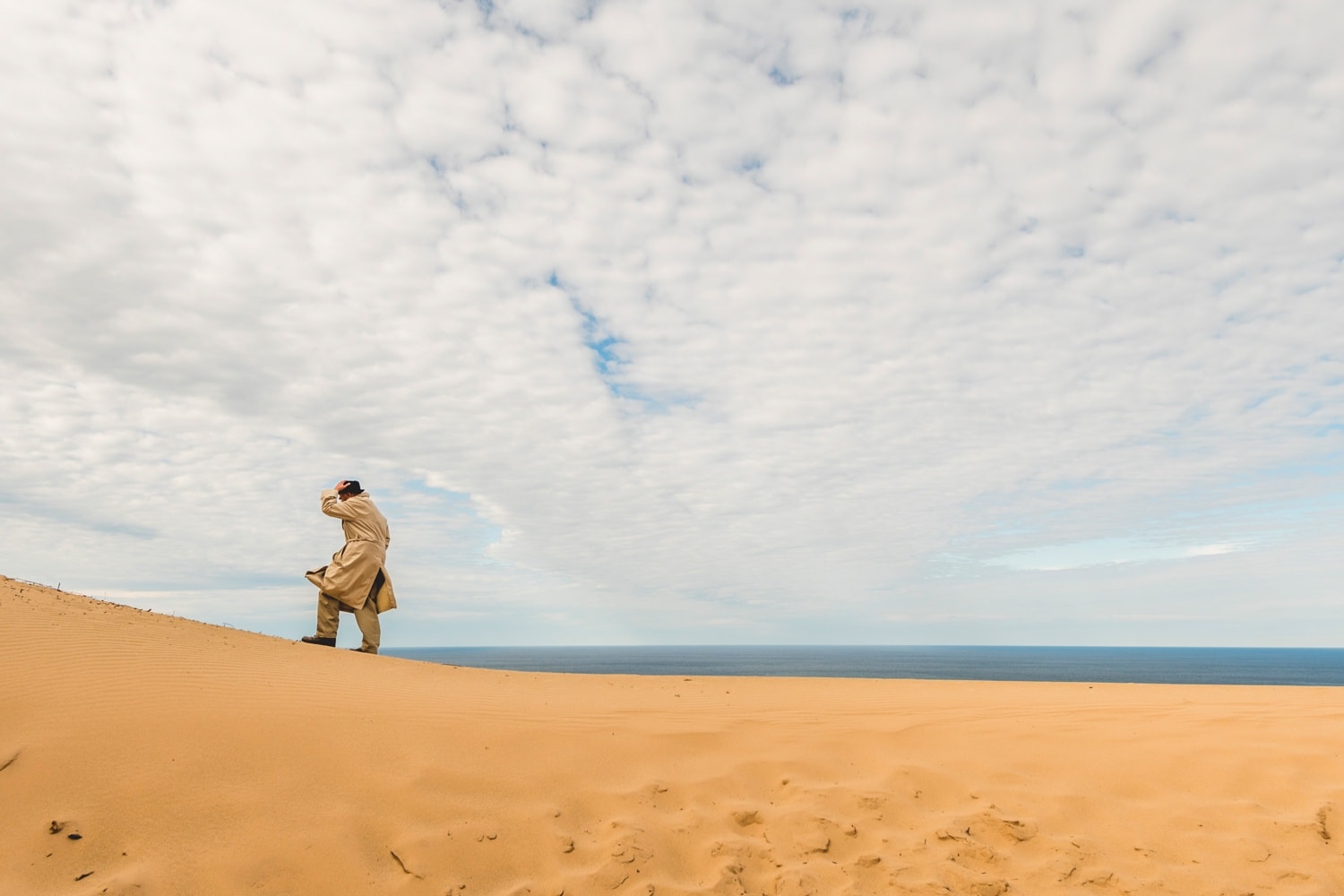 On the Trail of Sheriff Ray Elkins

Ray sat on the bluff above the beach and looked across the Manitou Passage in softening light. From Sleeping Bear Point the massive dunes stretched south toward Empire, rising again and slowly leveling as they neared Platte Point. The passage was almost devoid of boat traffic, and wave height had dropped to less than a foot.

— Death in a Summer Colony, by Aaron Stander

The power goes out during a performance of Agatha Christie’s Death at the Vicarage held at a venerable summer resort. When it comes on … you got it. A cast member has been fatally stabbed.

WHAT WOULD SHERIFF ELKINS DO?

We think he’d fuel up for a detective search at Shipwreck Café (11691 S Lacore Rd., Empire, 231.835.2580) with a huge and fabulous sandwich on pretzel bread to eat at the Lake Michigan beach in Empire.

The steep but relatively short hike up the Empire Bluffs trail leads to a blue, wide-open vista punctuated by the Manitou Islands and Sleeping Bear Point to the north. 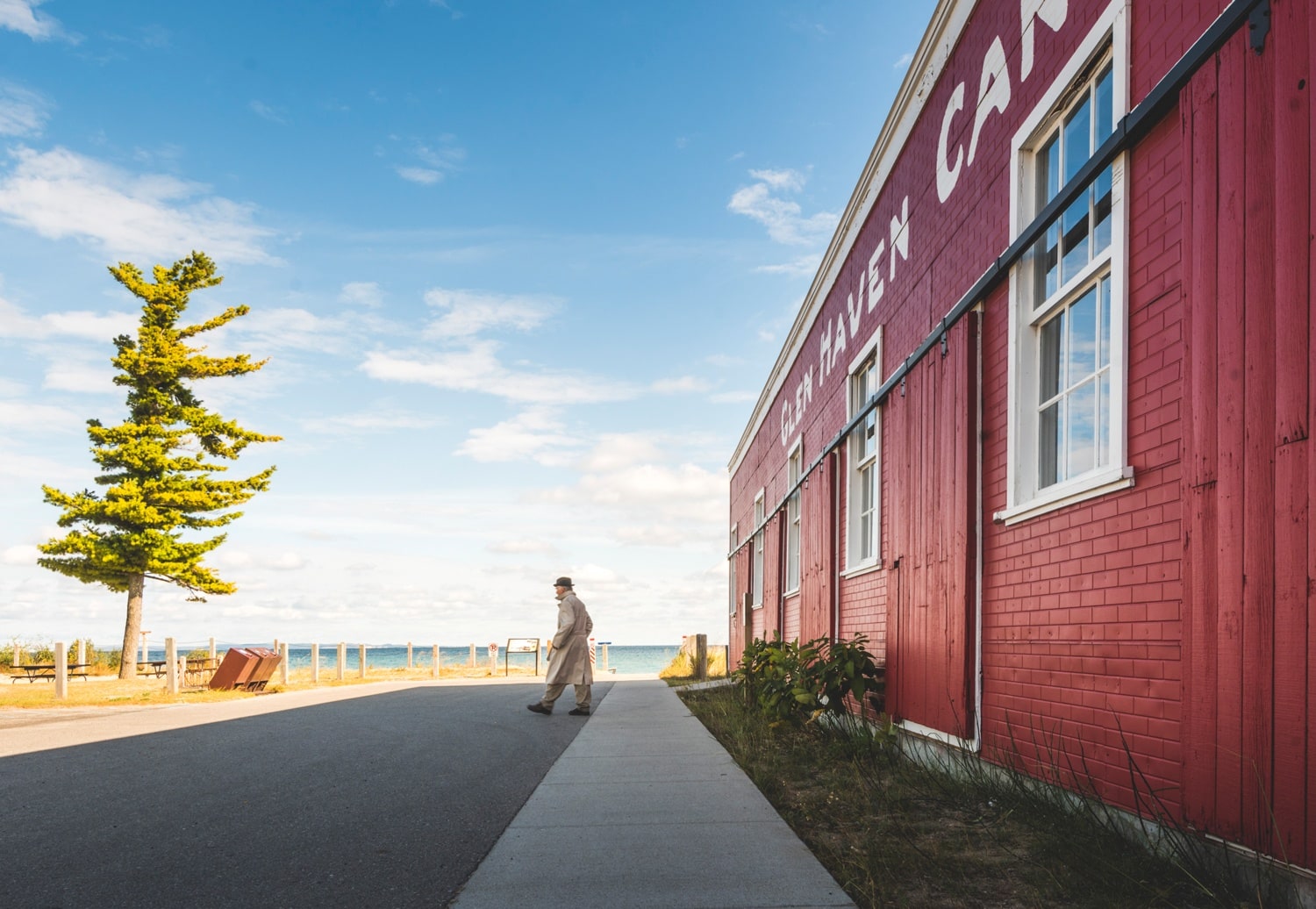 A few minutes later Ray leaned over the loft railing. “There’s something up here you should see.”

“Ah, the missing wine bottle,” she said after ascending the steps. “Champagne bottle,” she corrected as she moved closer. “So we have the empty bottle on the floor, rumpled sheets. I wonder if this is one of her wine pairings?”

Ray dropped to his knees and read the label out loud, “Sparkling wine from estate-produced Vignoles grapes in Cedar County. Excellent choice. I served you some of this last Thanksgiving.”

— Murder in the Merlot, by Aaron Stander

A celebrated wine blogger turns up dead in a vineyard.

WHERE WOULD SHERIFF RAY STAY?

Our cultivated sheriff obviously loves wines, so we think if he were treating a lady friend to a stay-cay he’d head for the luxurious Inn at Black Star Farms, tucked into the eponymous estate vineyard in Suttons Bay. In-room fireplaces and spa tubs, farm-to-table dining, fabulous house wine and views of the vineyard and surrounding Leelanau countryside. 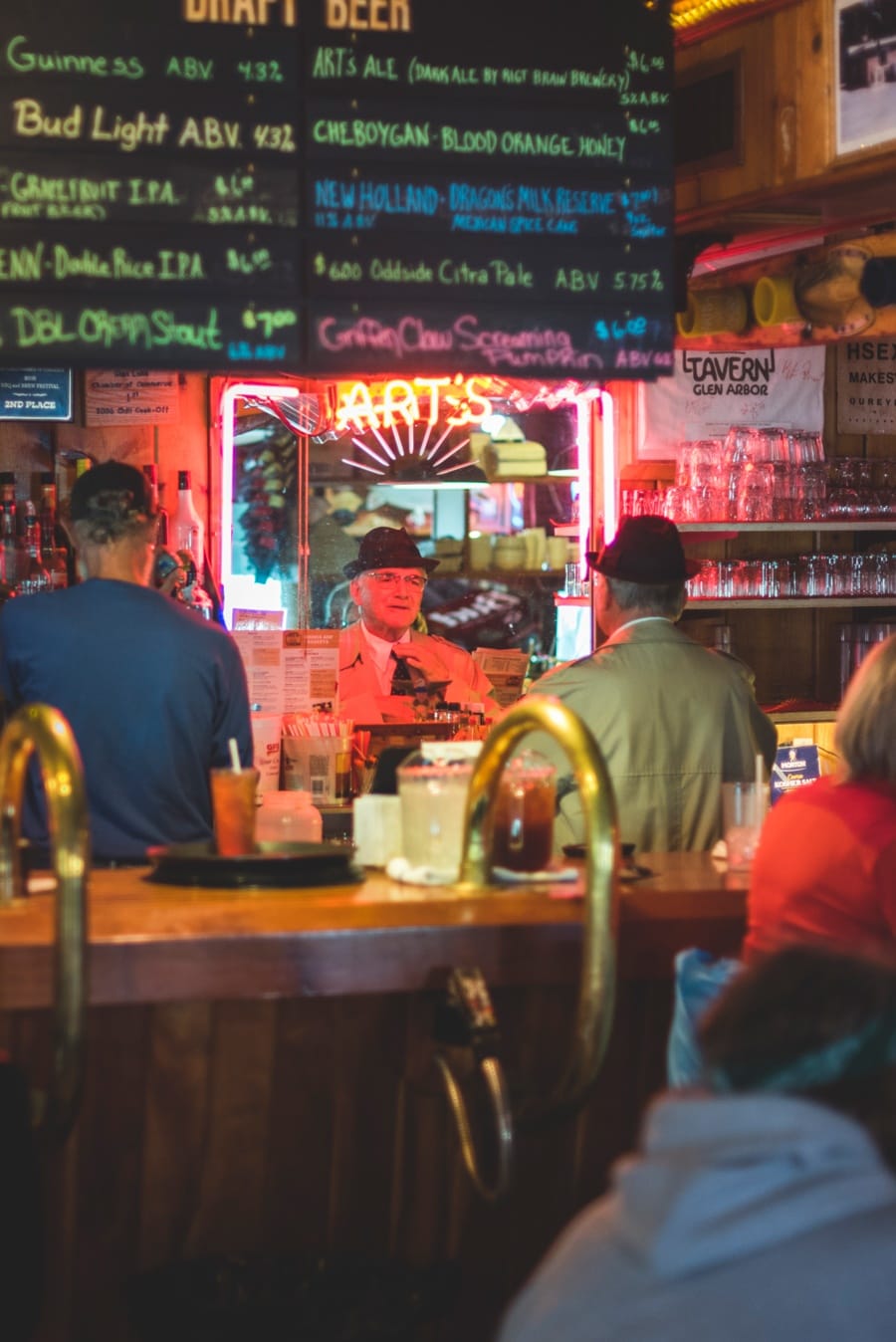 As he paddled, he settled into the rhythm of the waves, slowly moving through the water. Ashleigh’s face flashed across his mind; he was sure he had seen her before, perhaps in the IGA, at Art’s, or the Friendly Tavern.

An elderly woman walking her dogs down on the beach discovers the body of a young woman—a teacher at a local private school.

WHAT SECRET DOES RAY ELKINS KEEP?

Understanding the power of the tater tots at Art’s Tavern in Glen Arbor.

Cruise scenic highway M22 up the Leelanau Peninsula. Browse Fishtown in Leland and take in the sunset at Grand Traverse Lighthouse at Leelanau State Park in Northport. 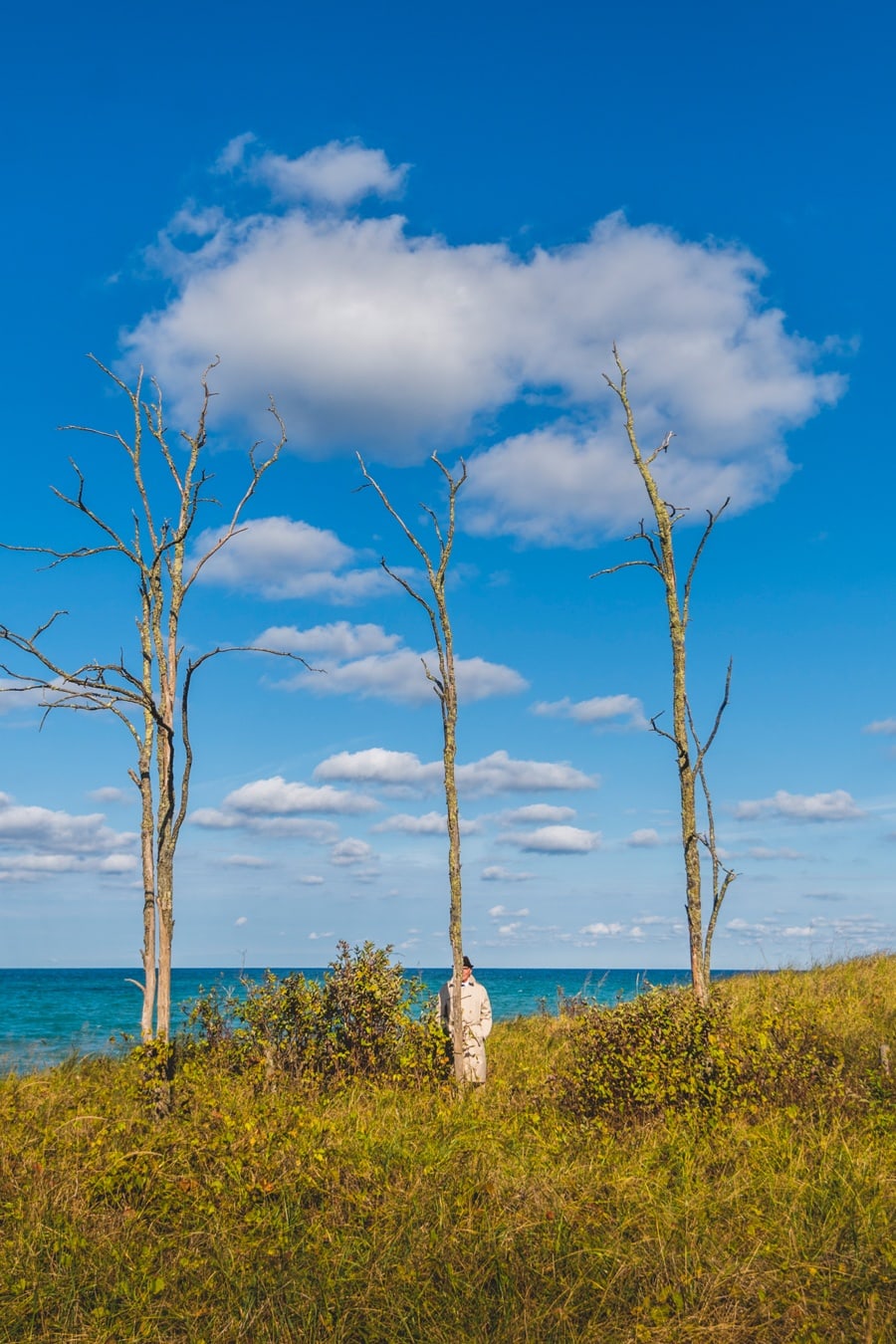 The best way to get your Ray Elkins fix is to pick the books up at an indie bookstore in Leelanau or Benzie counties. These booksellers all carry the series—and will be more than happy to help direct you to the places and products mentioned in the books.

A hearty thank you to author Aaron Stander for donning detective garb and standing in for Sheriff Ray Elkins in the photos for this story.

Elizabeth Edwards is managing editor of Traverse Magazine. lissa@traversemagazine.com // Tony Demin is a replanted local from Montana. His photos capture the in-between moments in living wild.