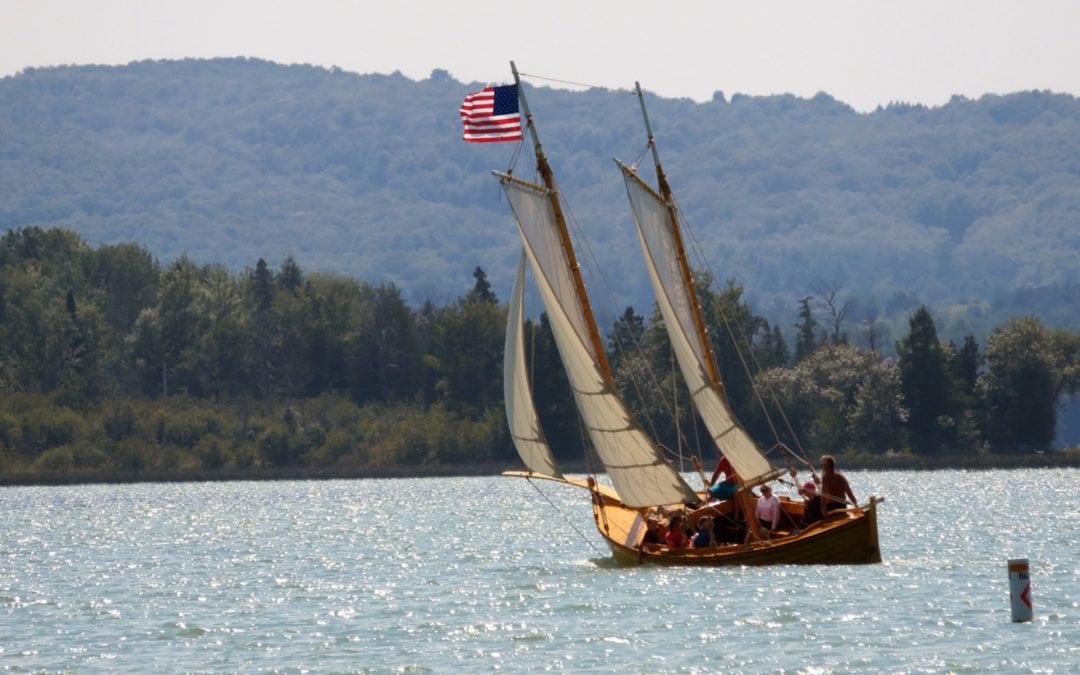 Bob Schafer spent three and a half years building a traditional 30-foot Mackinaw boat in his driveway in Ponshewaing, Michigan (a community nestled on the shore of Crooked Lake near Alanson). His story is told by friend Gregory Cutshaw.

What’s the first thing you would do if you built a sailboat in your backyard, or in this case, your driveway?

Make sure it floats?

Okay. What’s the second thing you would do?

Take my friends and neighbors for a sail?

Exactly! And, that’s exactly what “Boat Builder Bob” Schafer did. After making sure his new boat floated and he had the right amount of rocks on board for ballast, he invited his family, friends and neighbors to go sailing on Crooked Lake in his yet to be named Mackinaw boat, which is currently simply referred to as, “The Boat,” “Bob’s Boat” or “The Pride of Ponshewaing.” 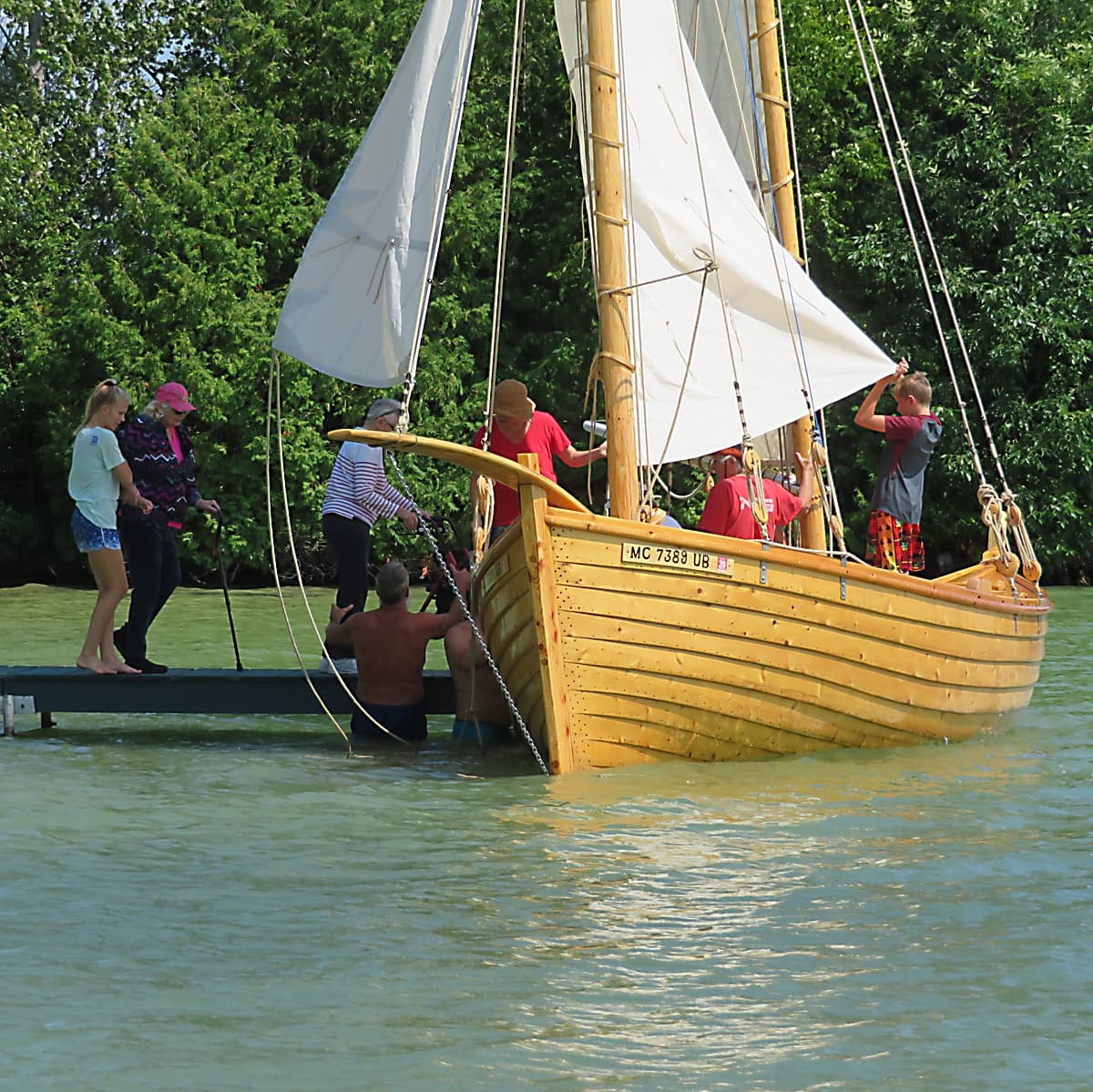 Bob Schafer got the boat-building bug early. After reading the book, “Dove” by Robin Graham chronicling Graham’s five-year circumnavigation of the globe in his 24-foot sloop, Dove; Bob, at the age of 19, began building his own 40-foot fiberglass sloop to not only circumnavigate the globe but to do it in a little more style. However, before he could finish the boat and get underway, he met and married the love of his life, Debbie. They moved to Wisconsin where Bob went to work for the renowned boat builder, Ferdinand (Red) Nimphius. Not only did Bob get drawn into the world of wooden boat building, he was baptized into it by one of the best.

Red Nimphius was famous for a number of innovations in wooden-boat building and design. Among them, he invented and produced the first hollow wood masts for boats designed by the legendary American naval architect and yacht designer Nathanael (Nat) Herreshoff. Nat was famous in his own right for designing and producing a succession of undefeated America’s Cup defenders from 1893 to 1920.

Eventually, Bob returned to northern Indiana where he and Debbie owned and operated a successful roofing business, before being drawn to Northern Michigan in a move that seemed inevitable. Both of them were drawn to the water. In addition to Bob’s interest in boat building, both he and Debbie were competitive water skiers in their teenage years. But, as time went on, their family began to grow, eventually to six—three sons and three daughters. Water skiing was replaced by tubing, wakeboarding and after-school activities with the kids.

The opportunity eventually presented itself to move nearer the “big waters” of Northern Michigan—first to Petoskey, then to St. Ignace where he built his first Mackinaw boat. Eventually, after moves to Mackinaw City and Northport, and after their children had grown and left home, Bob and Debbie landed in Ponshewaing. That is where Bob’s latest adventure started three and a half years ago. Bob and his three-and-a-half-year-old grandson, Jack, went off into the woods and waded through two feet of snow with an axe to chop down a carefully selected Douglas fir tree. The tree would be shaped and eventually become the keel of the boat.

Sometime after their move to St. Ignace, Bob began his adventure in boat building. Using the skills he had learned from Red Nimphius, he worked on his own boats between roofing and carpentry jobs. As his skills grew, so did his interest in boats designed specifically for the region, in particular, open workboats with sails generally called Mackinaw boats—boats built with readily available resources and simple carpentry tools. Woods like cedar, fir and ash. Tools like hammers, a Skilsaw, handsaws, ship’s adz, hand drills, brace and bits and some hand planes. With dreams in his head and tools in hand, “Boat Builder Bob” Schafer began his great adventure.

As mentioned above, The Pride of Ponshewaing is actually Bob’s second Mackinaw boat. His first, a 16-foot single-mast, gaff-rigged skiff built from the same basic scaled-down drawings of his latest boat, sits sadly out of the water. But it’s proudly displayed in front of Darrow’s Family Restaurant in, appropriately enough, Mackinaw City. Even out of the water, this little boat is an attention getter.

For the time being, Bob is getting to know his boat by sailing it around Crooked Lake. He’s hoping to find a home port for it and a place to build his next boat. In the meantime, he has already started making plans to lay down the keel of his next boat. The question is, will it be a “working” sailboat similar to a Mackinaw boat, or a much bigger live-aboard boat like a schooner? His neighbor is hoping it will be a working boat similar to a Galway Hooker, which worked the waters around the Les Cheneaux Islands. It originally featured bright rust-brown sails that were created by soaking them in tannins to protect them from the saltwater of Galway Bay. “We’ll see,” Bob says. 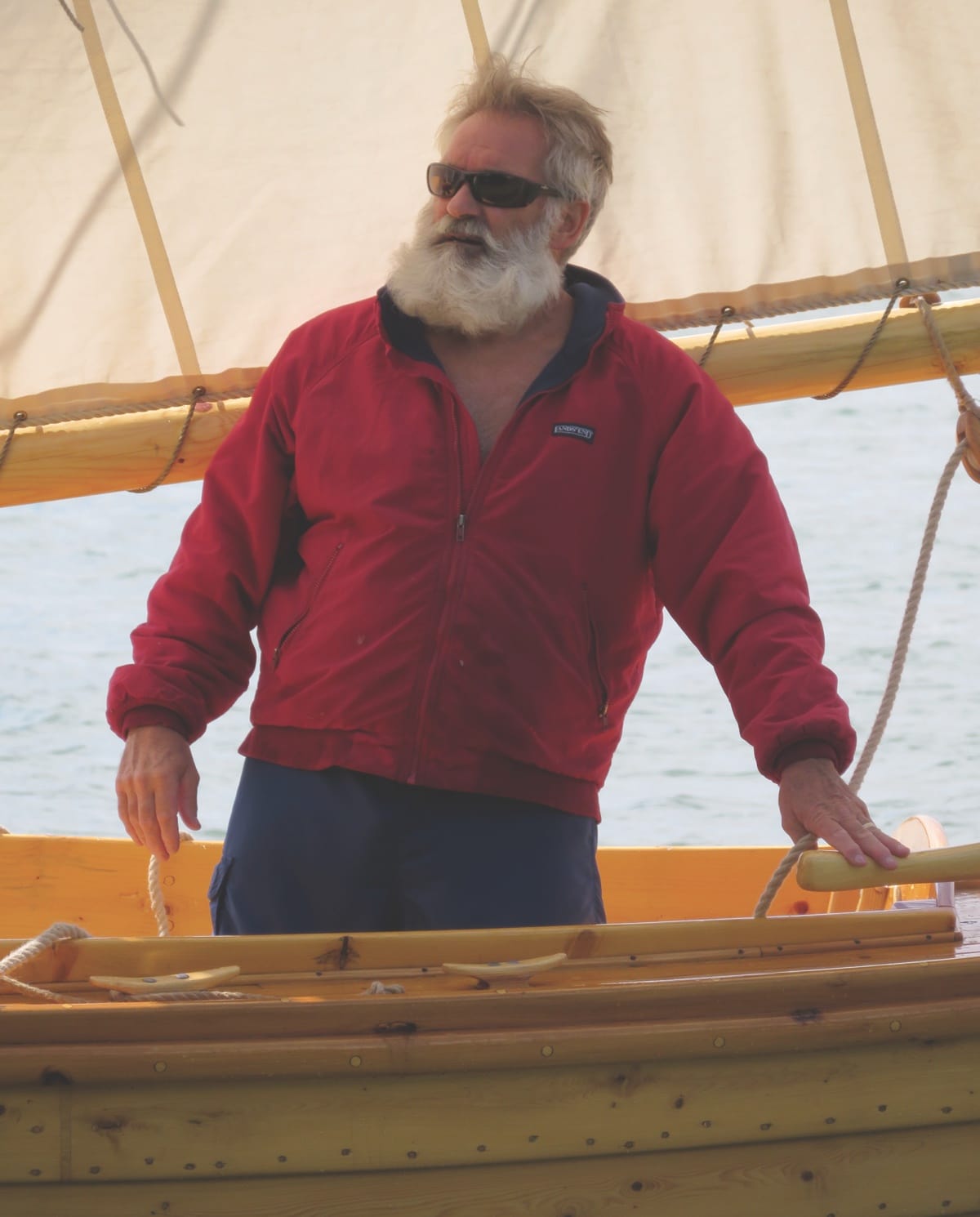 Lore has it that Mackinaw boats date back to the late 1600s and early 1700s when French Canadian voyageurs and trappers opened the area. To get their furs from the western and northern Great Lakes regions back to the major trading centers of Montreal and Quebec, the voyageurs originally relied on the large canoes they came west in. But as trade routes and outposts were established, so too did the evolution of new technology.

Although Mackinaw boats were reliable workboats, in their day, they were as close to a single-use form of transport that existed. They could be built quickly and cheaply, sailed to the Lake Erie side of the portage around Niagara Falls, and left after the furs were transferred to ships to be taken up the St. Lawrence to Montreal or Quebec. Mackinaw boats were in essence self-propelled, 16th-century equivalents of today’s shipping containers.

It is thought the original Mackinaw boats were built in the Mackinac Straits area, hence the name, Mackinaw boat. They were roughly based on the flat bottom, double-ended design of Native American canoes. They were easy to construct on the shore of a river or lake and could be maneuvered in shallow water. It was soon discovered that by adding a retractable center board to these 18- to 24-foot “rowboats,” they could also add sails, which made them not only faster but even more versatile as workboats. They became such workhorses that cat ketch-rigged, lap strake or clinker-built versions of boats like Bob’s evolved over time and were still working as fishing boats in the western Great Lakes into the early 20th century. They were referred to as, “Western Lakes Mackinaw boats.” 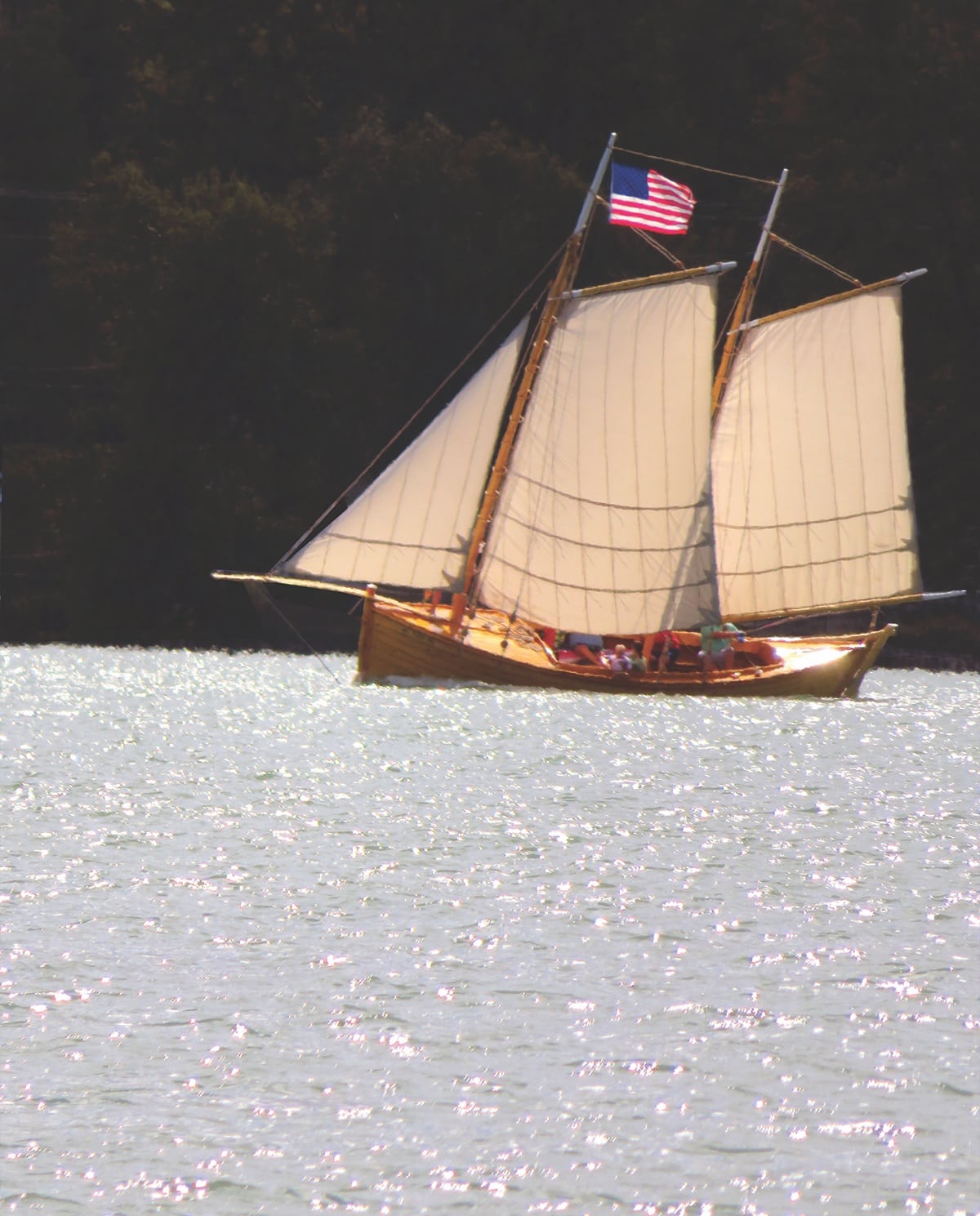 Spared length
39’ [tip of bowsprit to end of main boom]