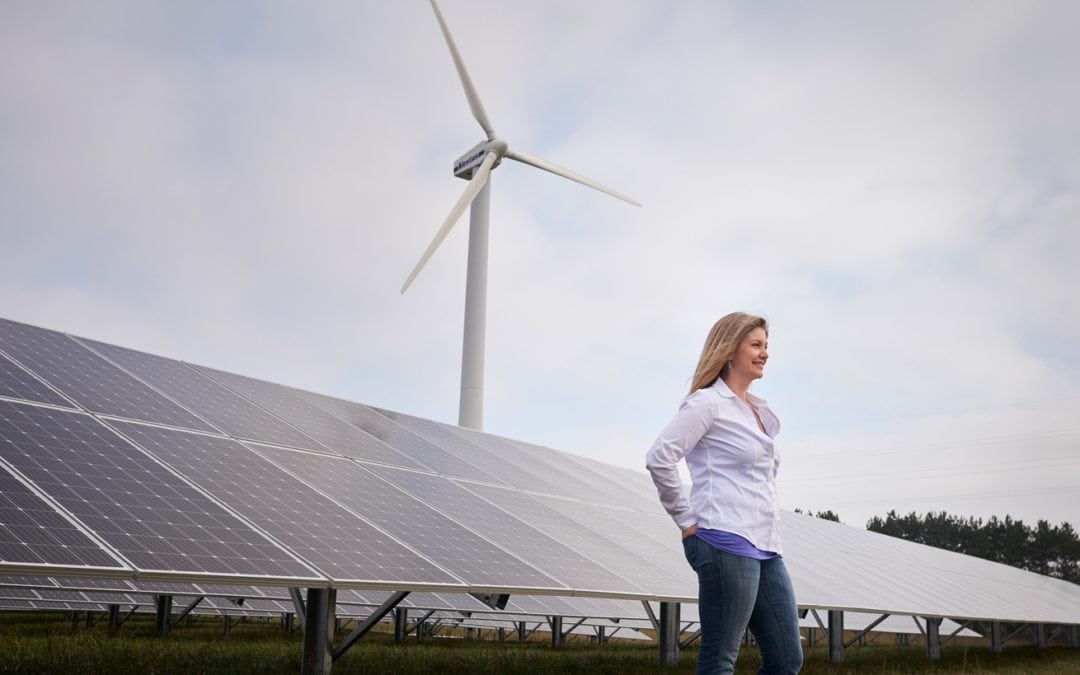 Traverse City committed to meeting 100 percent of city operations’ electrical demands with renewable energy by 2020. Then the city took it a step further promising to use 100 percent renewable energy community-wide (houses and businesses) by 2040. Here’s a flyover of how that came to pass.

Picture it: 200 children in Traverse Heights Elementary School cheering, not for basketball or volleyball or a spelling bee, but for renewable energy and lower carbon emissions. More specifically, they are cheering the solar panels just installed and now tilting toward the sun on the roof of their school. For Kate Madigan, who helped write the grant for the solar panels, and who works for the Michigan Environmental Council as energy and climate policy specialist and leads the Michigan Climate Action Network, the moment was rewarding enough in itself. She and others had worked hard to get the funds and to round up free labor to design and install the solar array. As she listened to the kids cheer, however, she knew the greatest benefit of the project would not be the two houses’ worth of power generated each year, but in the science lessons and sense of possibility the array would inspire in the students and the broader community.

For Madigan, the April 2016 event was also inspiring a possibility, one that would have even bigger consequences for reducing carbon emissions within Traverse City. The cheering kids helped her realize that now might be the moment for Traverse City to join other U.S. cities, including Grand Rapids, Michigan, and commit to using renewable energy for 100 percent of city operations. Lending momentum to the idea: newly elected commissioners who were renewable-energy friendly.

With lightning speed for city government decision-making, just eight months after the school solar array switched on, the Traverse City Commission passed a resolution to use 100 percent renewable energy for city operations by 2020. In addition to reducing carbon emissions and helping to slow global warming, renewable energy will also reduce many other air pollutants that come from burning fossil fuels. The commission passed the resolution unanimously at the last meeting of 2016, so renewable energy supporters called the vote a holiday gift to the people of Traverse City.

How did Traverse City so quickly join that group of local governments willing to push forward with a net zero carbon mission? In spring of 2016, Madigan and her pro–renewable energy colleagues created a team whose mission was to figure out the details of what they would ask the TC commissioners to write in the resolution. Should they ask for 100 percent renewable for the entire city—all the houses and businesses included? Should they ask to include emissions from city vehicles? Should they include the wastewater treatment plant, which uses more electricity than all the rest of city operations put together? In October that year, they also brought former Grand Rapids mayor George Heartwell to Traverse City to explain how he’d achieved something similar in a much larger city—a case study that showed the idea was plausible.

The renewables advocates met with TC mayor Jim Carruthers, each commissioner and Traverse City Light and Power board and staff. Madigan and her team realized there were too many obstacles to take on the entire city right now. And even the wastewater treatment plant would probably raise objections from Traverse City Light and Power staff—the people who would have to actually figure a way to replace all that energy with renewables.

Eventually the renewables team decided to ask for a goal of 100 percent renewable energy for city operations, as measured by electricity meters—about 10,000 megawatt hours per year (roughly equal to 1,000 homes). The renewables advocates figured the 100 percent municipal operations goal would be an important and valuable step. It would inspire thoughts of bigger possibilities among government officials and the general public, the same way the Traverse Heights solar array would inspire the students there. The resolution did call for citywide net zero carbon emissions by 2050, which includes transportation and heating of buildings.

“We were ready for pushback after we passed the goal,” Madigan says. “We were ready for letters to the editor, something, because there’s a lot of climate change denial. We even expected pushback on clean energy, because some see that as a political issue. But we didn’t see any pushback at all.” They saw the opposite: a lot of support.

In October of 2017, not even a year after the resolution passed, Traverse City met 20 percent of its goal when Traverse City Light and Power purchased electricity from a 1 megawatt solar array installed by Heritage Energy on four acres adjacent to the commercial windmill west of town on M72. TCLP will meet more of the goal by buying into a wind power installation in the Thumb. One option being discussed: TCLP could meet the goal simply by purchasing all the renewable power it needs from wind and solar farms.

Mayor Carruthers concedes he thinks about expanding the 100 percent renewable goal to include homes and businesses by 2030. Traverse City would join 58 U.S. cities with that bigger goal. “I think it’s a reasonable thing to think about,” he says. “If the cost of renewable energy continues to go down and we can just buy into it … let’s move it forward.”

After press—this story was featured in the June 2018 issue of Traverse Magazine—Traverse City became the first city in the state of Michigan to commit to using 100 percent renewable energy community-wide by 2040—joining more than 75 other cities across the country including, Denver, Orlando, Minneapolis and others. TCLP is working to have 40 percent of its energy portfolio obtained from clean sources by 2025, followed by the 100 percent goal by 2040.

One issue to overcome in setting a 100 percent citywide goal is that TCLP has “life of plant” contracts with two coal plants that represent nearly 70 percent of the utility’s power, explains TCLP executive director Tim Arends. One contract could expire about 2030, the other about 2040. “The conversation is really: be as renewable as you can, and when a contract falls off, replace it with renewable,” Arends says.

Price will also be a big part of the discussion moving forward. Heritage Energy is charging TCLP 10.5 cents per kilowatt-hour, which is about what TCLP sells power for, so the utility makes no profit. That’s not a sustainable business model. Wolverine Power has a renewable energy division called Spartan that offered to sell TCLP clean energy at 5 cents per kilowatt-hour. “It’s a dream come true to have a cheap rate like that for renewable energy,” says Dan Worth, clean energy policy specialist with Groundwork Center for Resilient Communities. “But is there added value in doing this locally, paying local people. If we buy from elsewhere, all this money goes elsewhere.” If Heritage can bring the price down on future solar installations, how much premium is worth paying to keep the electricity generated here?

Meanwhile, TCLP now has about a year and a half left to hit its goal of 100 percent renewable energy for municipal operations. The new Green Team—also created by the resolution—is meeting regularly to discuss strategies for getting there. SEEDS and city staff are conducting energy efficiency studies to shrink the city’s power footprint. TCLP is studying cost models. The carbon emissions are dropping. And the question has changed from “Can we?” to “How can we?”