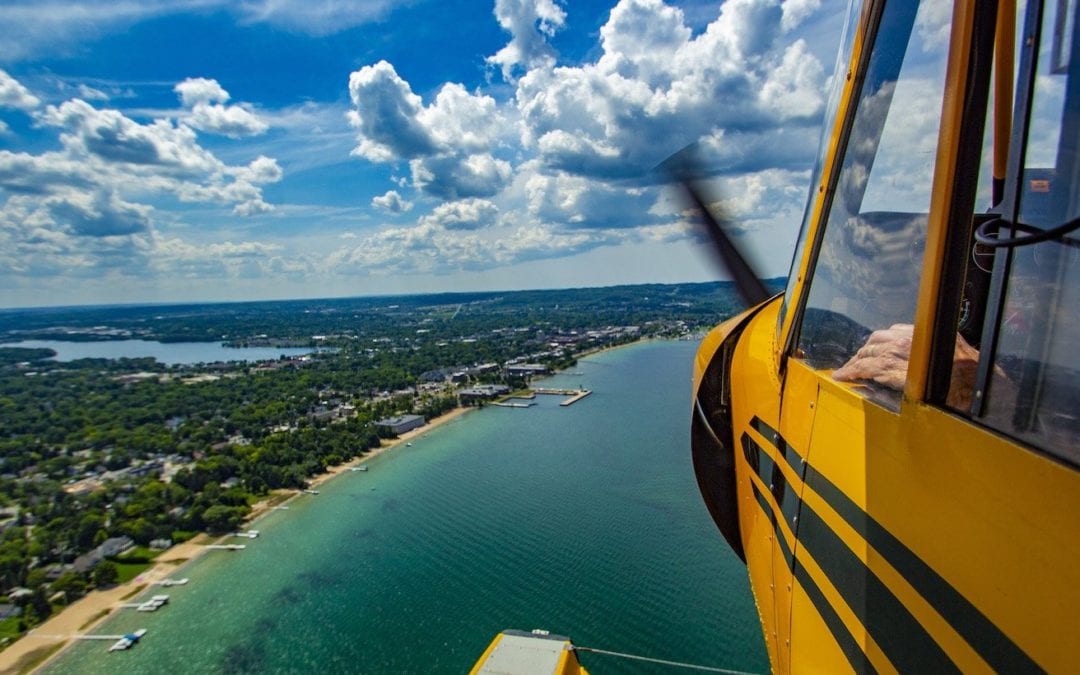 They didn’t know if it would ever fly again. But the instructors and mechanics at Northwestern Michigan College didn’t give up. Thanks to their dedication, we got to take a ride in the PA-18 Super Cub known as 644 Delta Romeo—the iconic yellow seaplane often spotted flying over Traverse City. 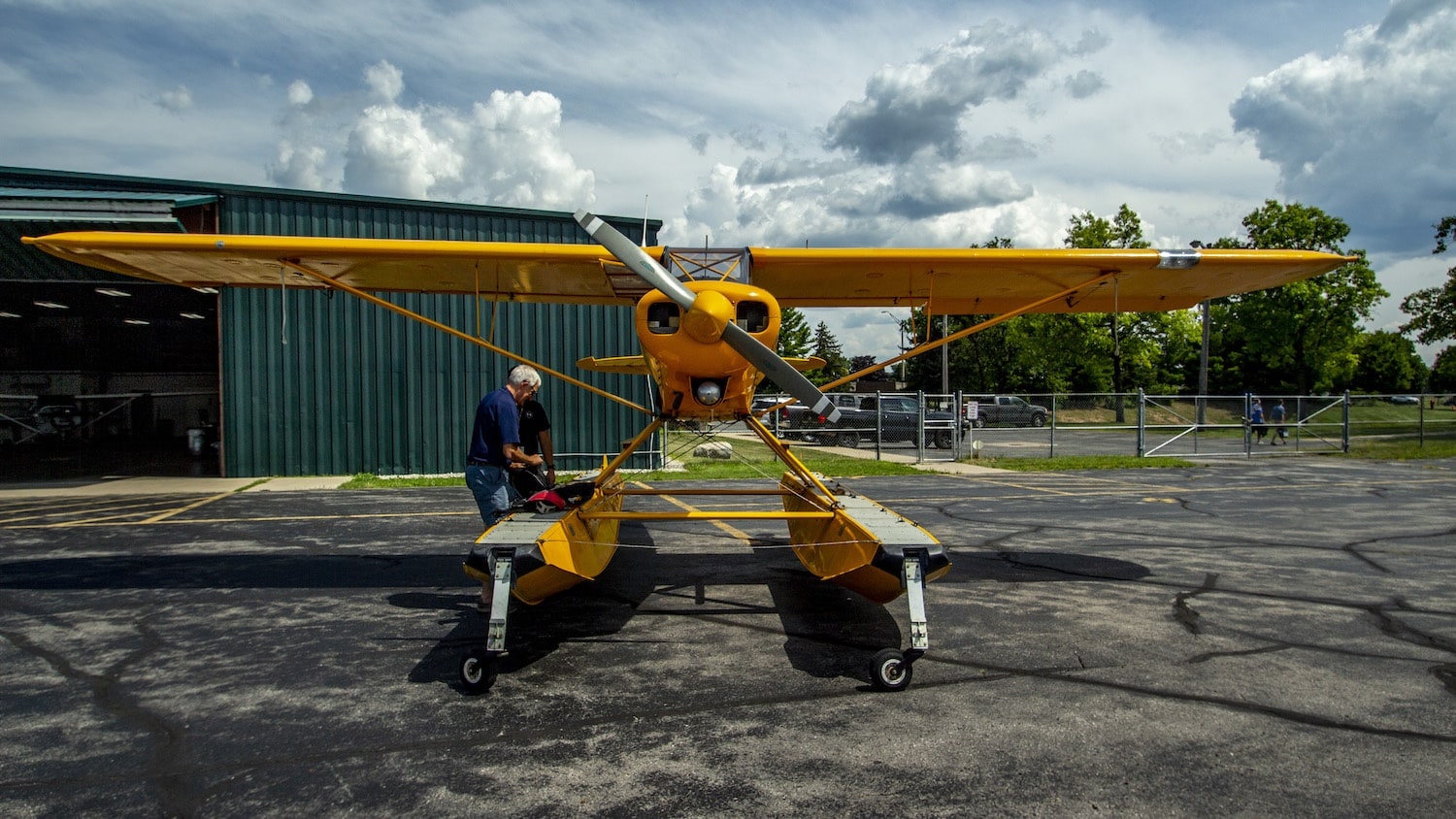 PA-18 Super Cubs are designed and built by Piper Aircraft. This one made its debut back in 1953. Before coming to Traverse City, the plane was used by the National Forest Service, likely as a seeder. When the NMC crew found it, the plane was landbound—destroyed by a crash. Named N8777C (November 8777 Charlie) at the time, it was a forgotten aircraft.

The renaming of N8777C to 644DR is in memory of pilot Don Rodriguez, a flight instructor at NMC who was onboard an L-39 Albatros that went missing during a practice flight for the 1998 National Cherry Festival Airshow. His loss is still felt by family and friends today.

When NMC saw it on an auction site in the ’90s, they purchased it immediately. The price? $1,500. (Just for reference, decent seaplanes today go for about $250,000.) The plane didn’t fly though, and some said it would never fly again. Bob Buttleman, former director of the aviation program, wanted to think otherwise. His plan was to acquire the plane and make it a community project, something for pilots and mechanics to work on in exchange for some ownership of the aircraft. But as times grew hard at the college, and donors drew back, less attention was given to the plane. Pushed aside, it was up against a wall again. 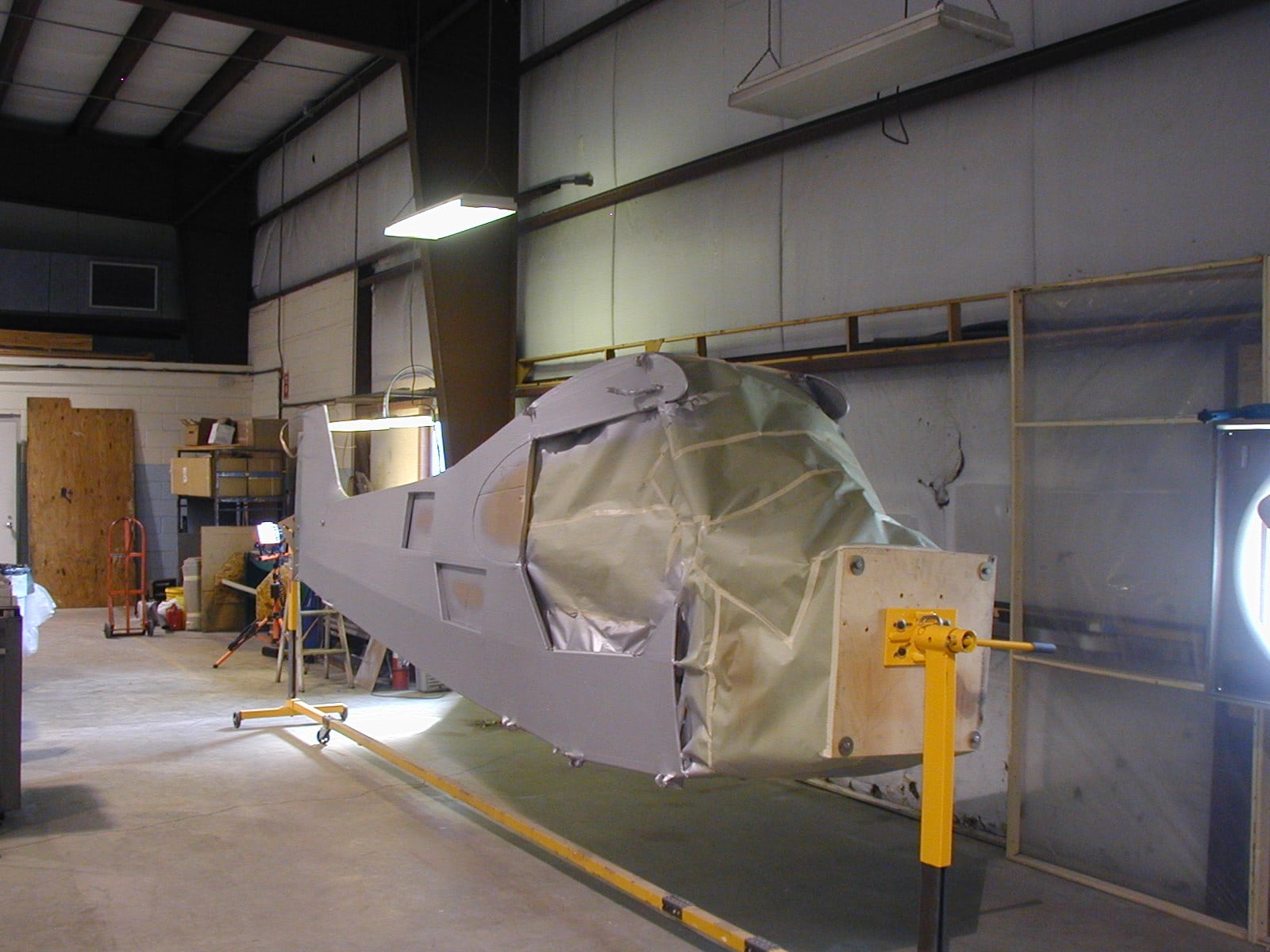 The plane frame being re-crafted after it was stipped down. Photo provided by NMC.

Enter Ed Borstel (who still works at NMC today as a lead mechanic). Ed came to NMC as a helicopter mechanic after retiring from the U.S. Air Force. Over the next seven years, Ed and 644 Delta Romeo got to know everything about each other. One of the wildest lessons he had to learn was the art of fabric covering. Take another look at the plane. Think it’s all metal? When you run your hand along the side it feels like a painted canvas—because it is. The only parts of the plane that are metal are the struts, engine mounts and floats—and some screws, bars and bolts here and there. Other than that, it’s a giant flying painting. 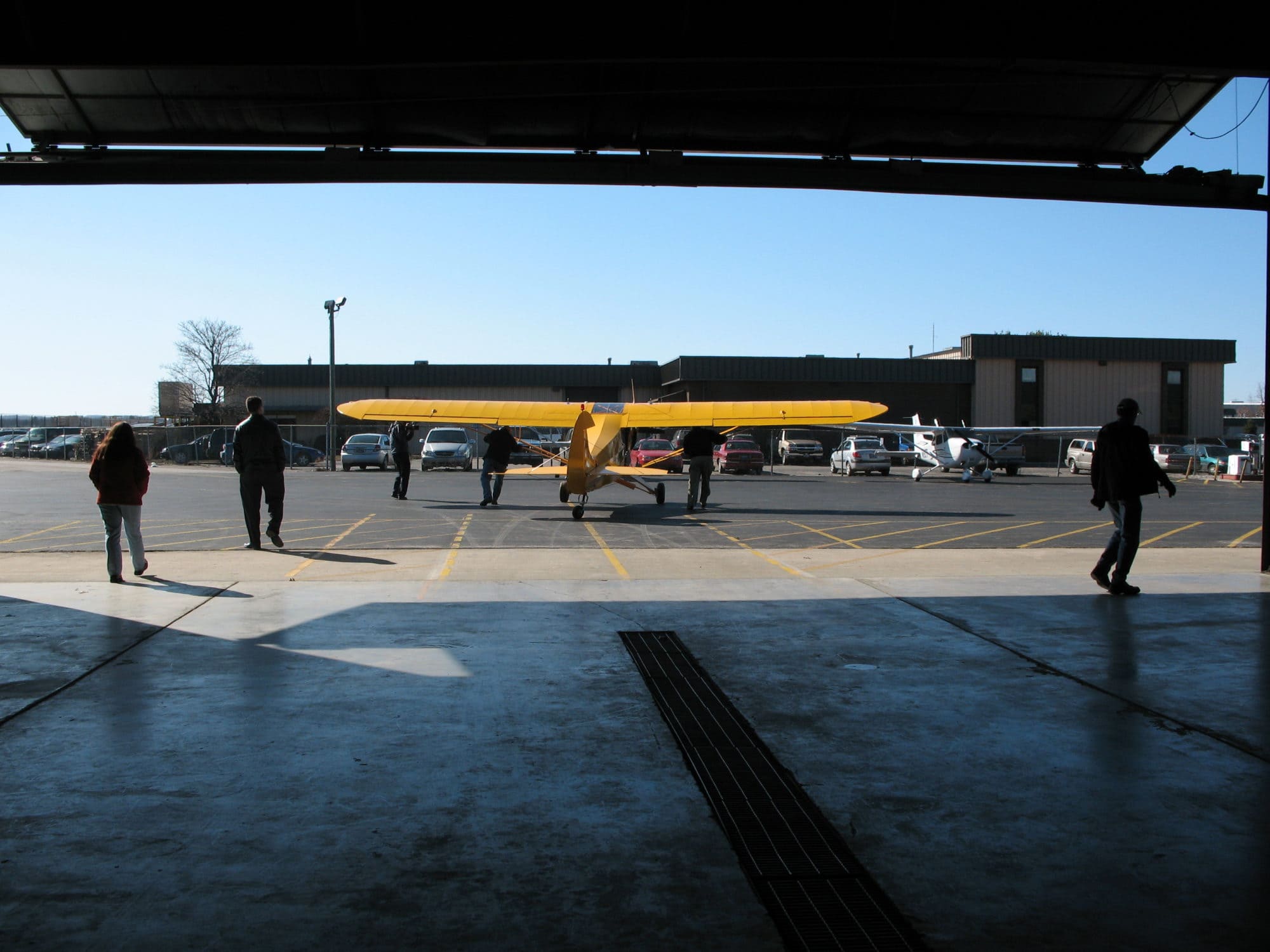 644 Delta Romeo heading out on the runway for the first time. Photo provided by NMC.

The first engine-test out on the runway was a landmark day for NMC. Mostly because it didn’t go according to plan. The intent was to fire up the engine and barrel it down the runway, maybe getting a few feet off the ground just for kicks. Simple. But 644 Delta Romeo isn’t like most planes, she’s a high-flyer …

Bob Buttleman taxied the plane out on the runway. Pushing the throttle he checked the magnetos in each engine. All was clear. Bob gave it some juice and 644 Delta Romeo decided it was time to spread her wings. 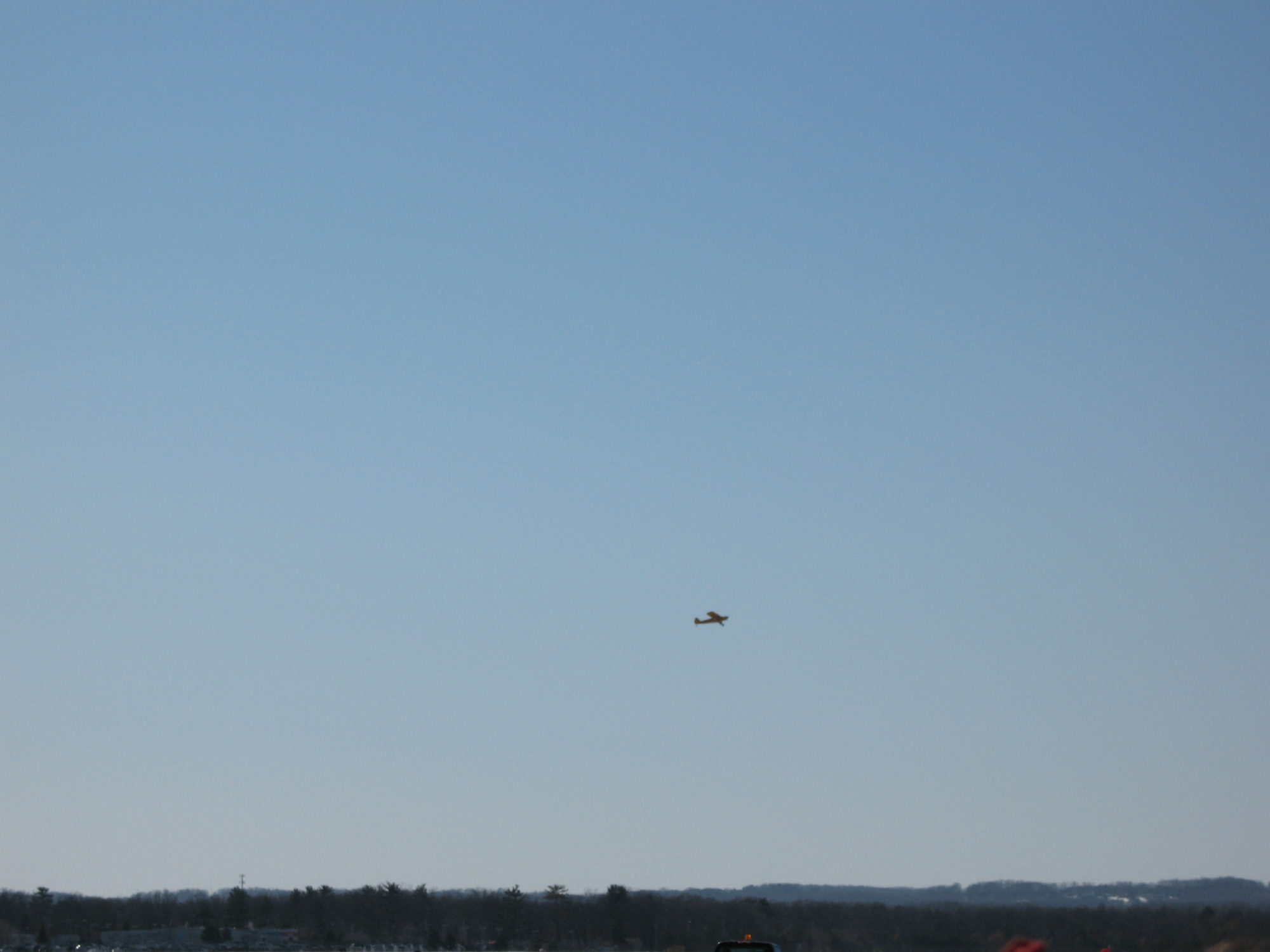 To everyone’s amazement, the bird took off. High above the ground, Bob burst with as much excitement as the ground team far below—and calmed a few nerves. Hard to believe this was the same plane that was crumpled in the corner not so long ago.

That overcast day in March 2007 was not only 644 Delta Romeo’s first runway test, it was her first flight in seven years. 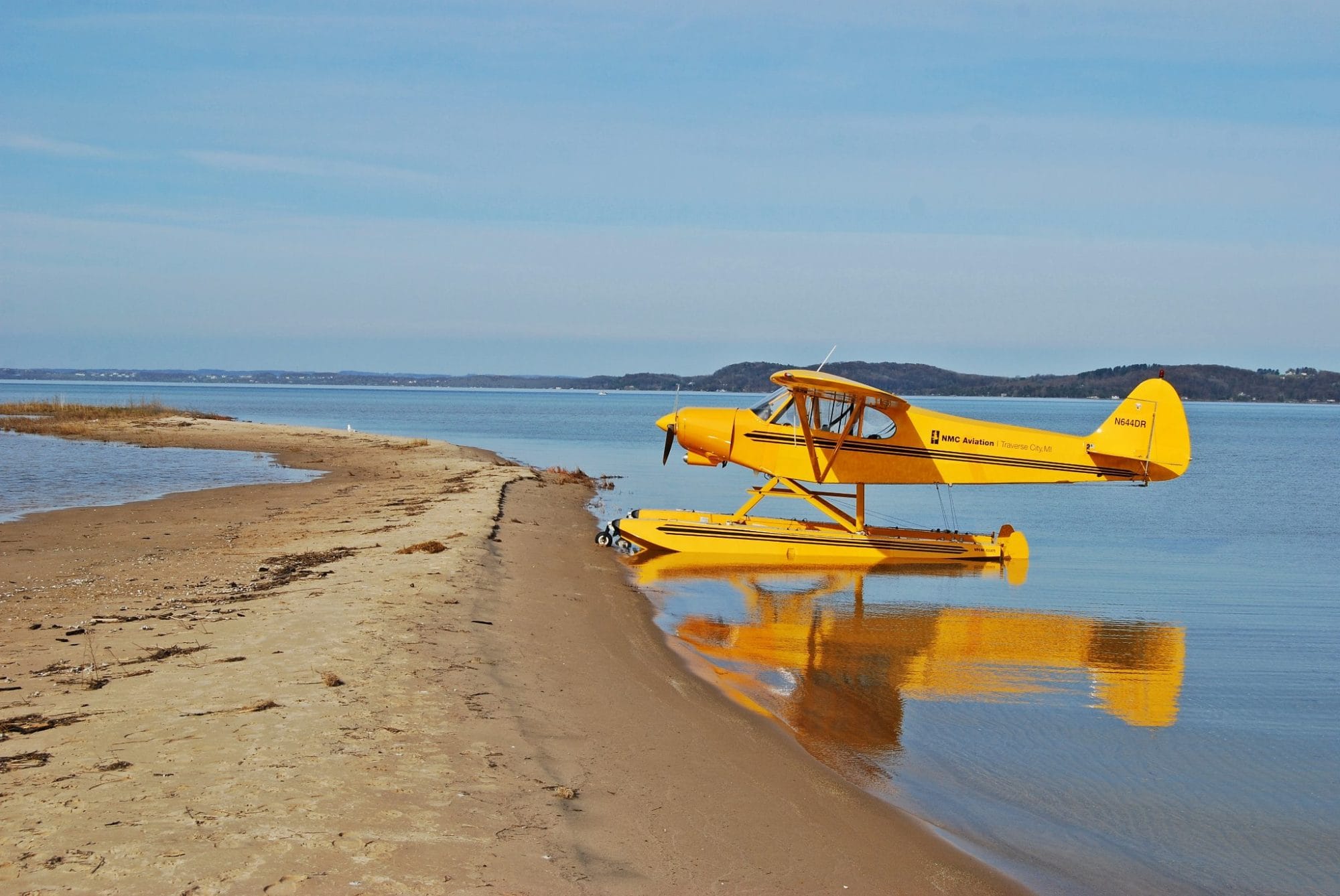 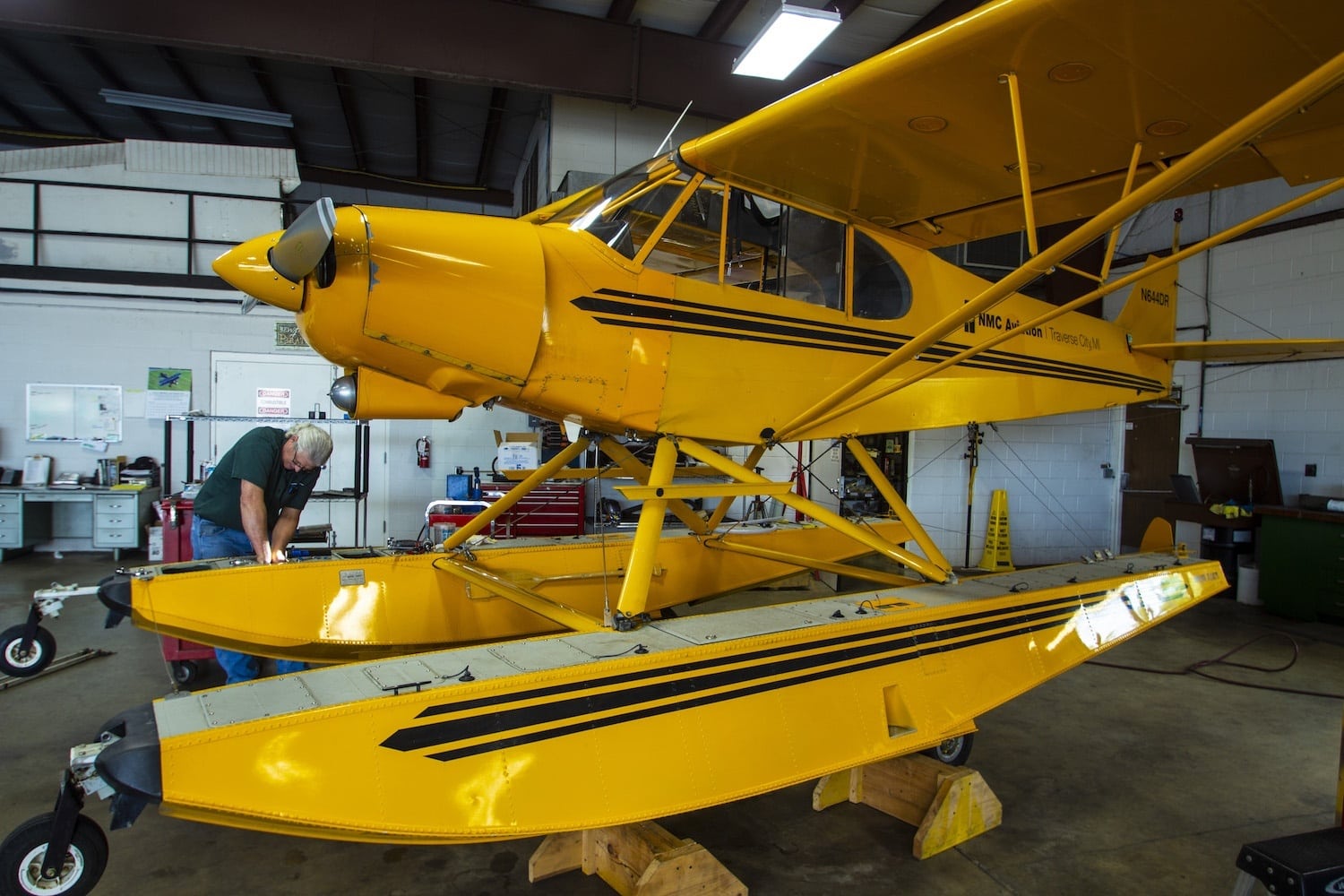 644 Delta Romeo is very different compared to its PA-18 Super Cub siblings. If a part came in that fit, the NMC crew added it. If a donation of supplies was made to the hangar, they’d sift through the pieces and search for something that worked. If a donor wanted to sponsor something, it became signature. Aviation geeks might notice 644 Delta Romeo is missing her thunderbolt art on the side. That’s because NMC wanted something unique to them, so instead of a thunderbolt, there are three black lines. Every piece of 644 Delta Romeo has a story behind it. It’s not just an off-the-lot plane that has been repaired. It’s a whole new plane right down to its frame. Another key difference? Most PA-18 Super Cubs can’t land on water.

Amphib is the slang pilots use when referring to seaplanes that can land on both ground and water. 644 Delta Romeo started as a taildragger. The original idea was to equip the bird with floats midseason and then switch them on and off. During summer it would be a float plane. In winter it would be a taildragger. NMC would have had to dock somewhere on a lake, organize transportation and spend weeks every season in the shop switching the landing gear. Sound like a hassle? Yeah, they thought so too. Rather than choosing floats or wheels, NMC decided to invest in amphibious landing gear. Land or water, they can bring the bird down. (Watch a video of a water landing below.)

A few shots from my flight on 644 Delta Romeo more than a decade later …
(All photos by Dan Oswalt unless marked otherwise.) 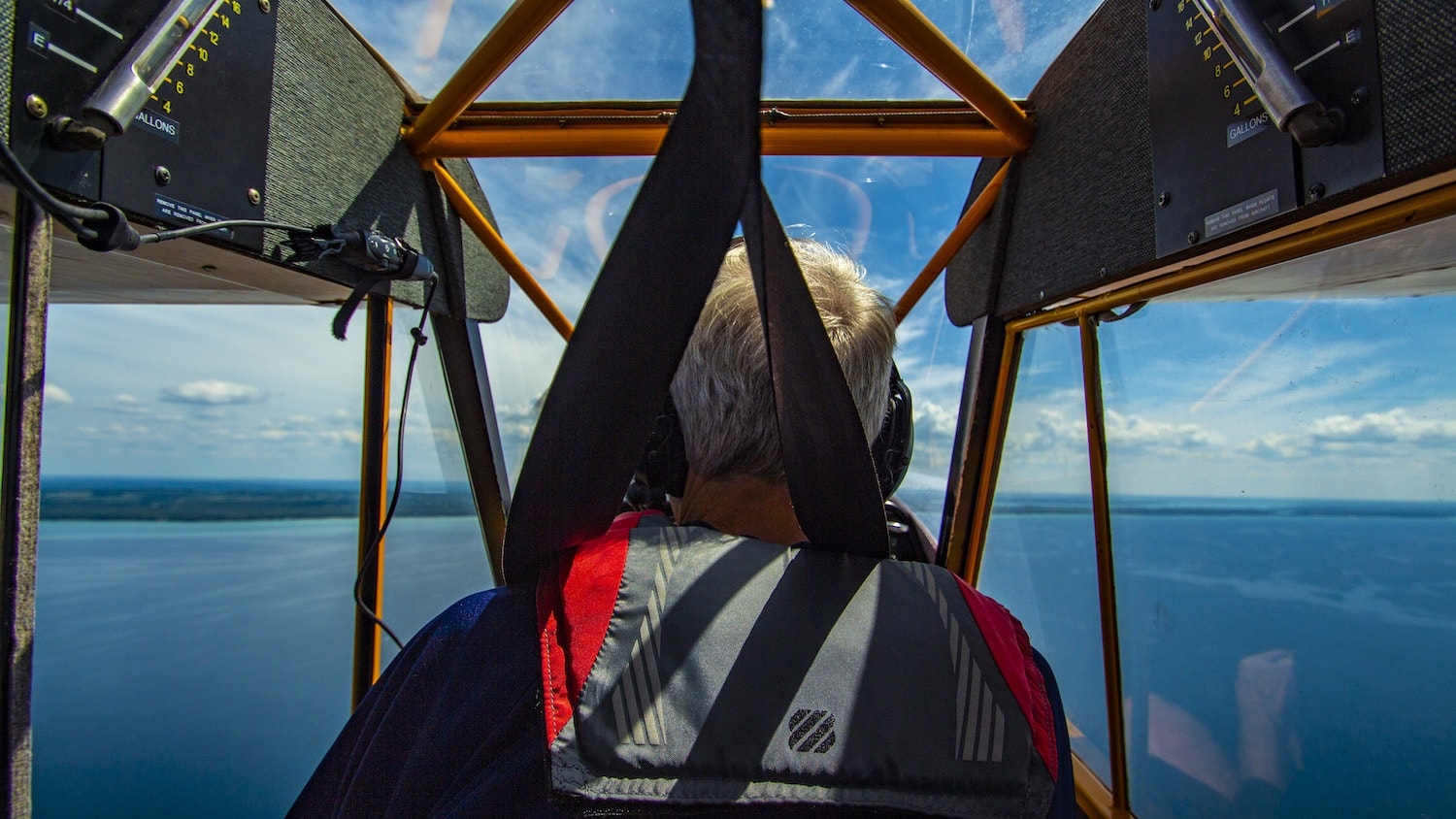 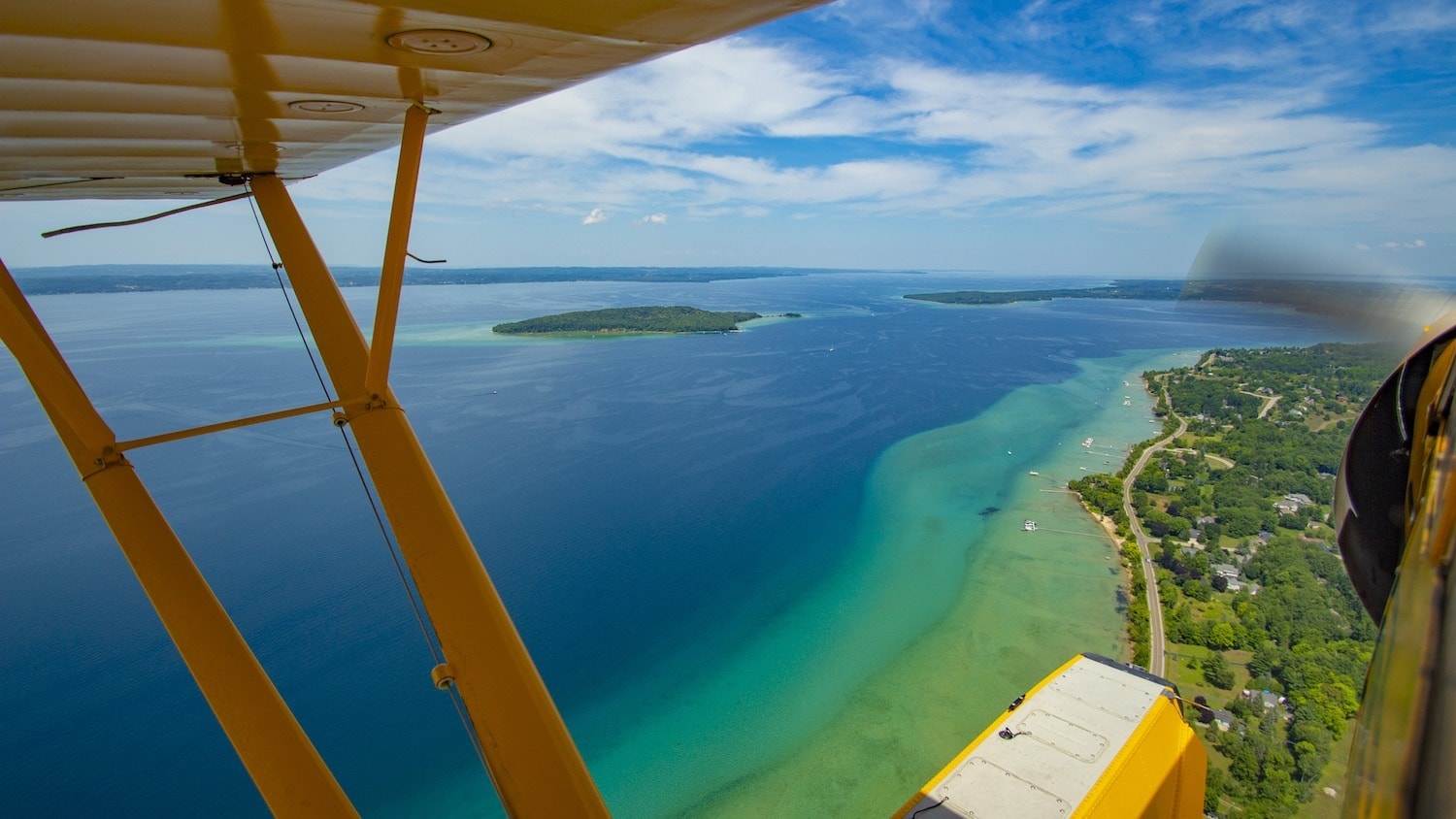 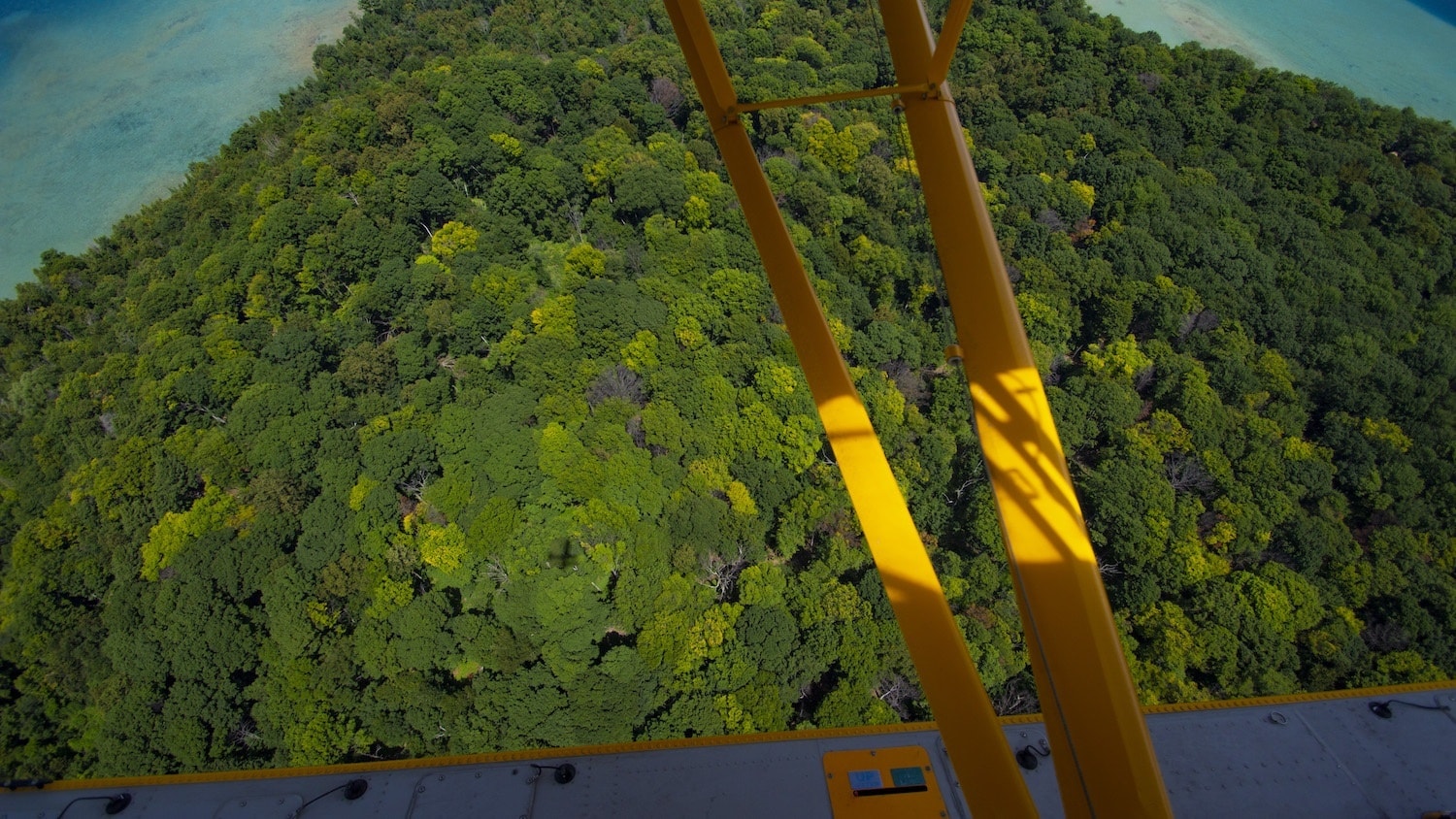 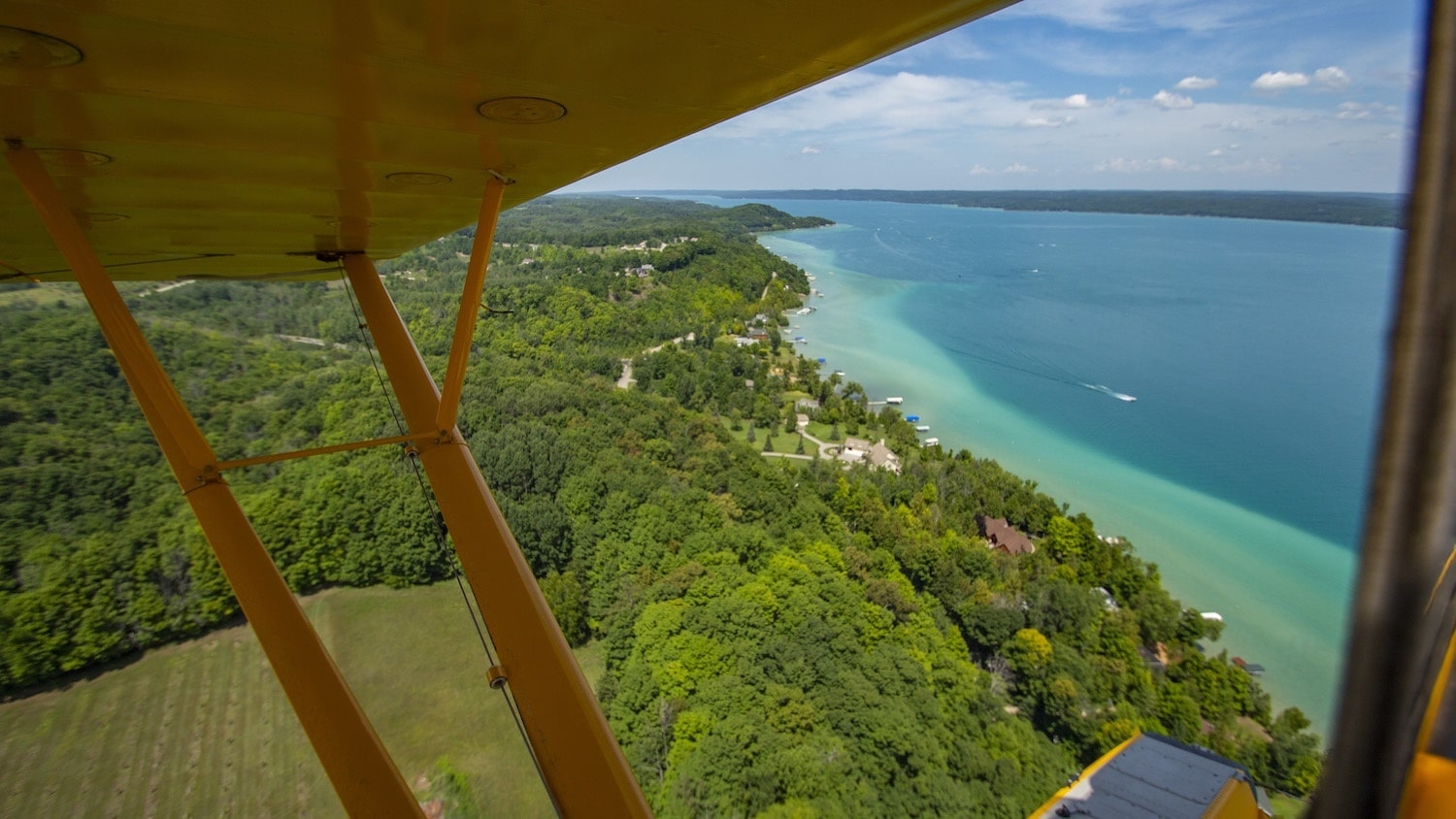 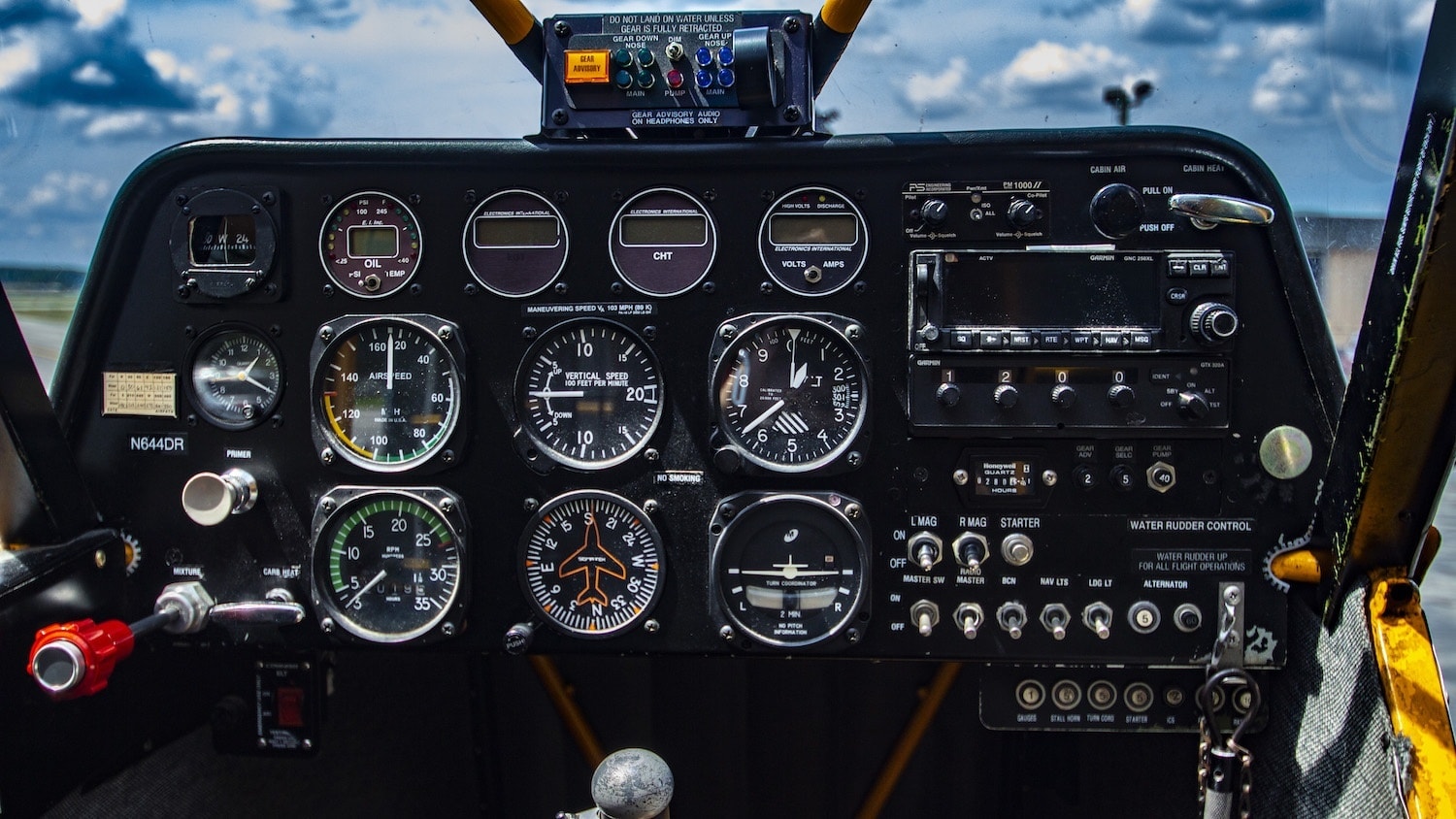 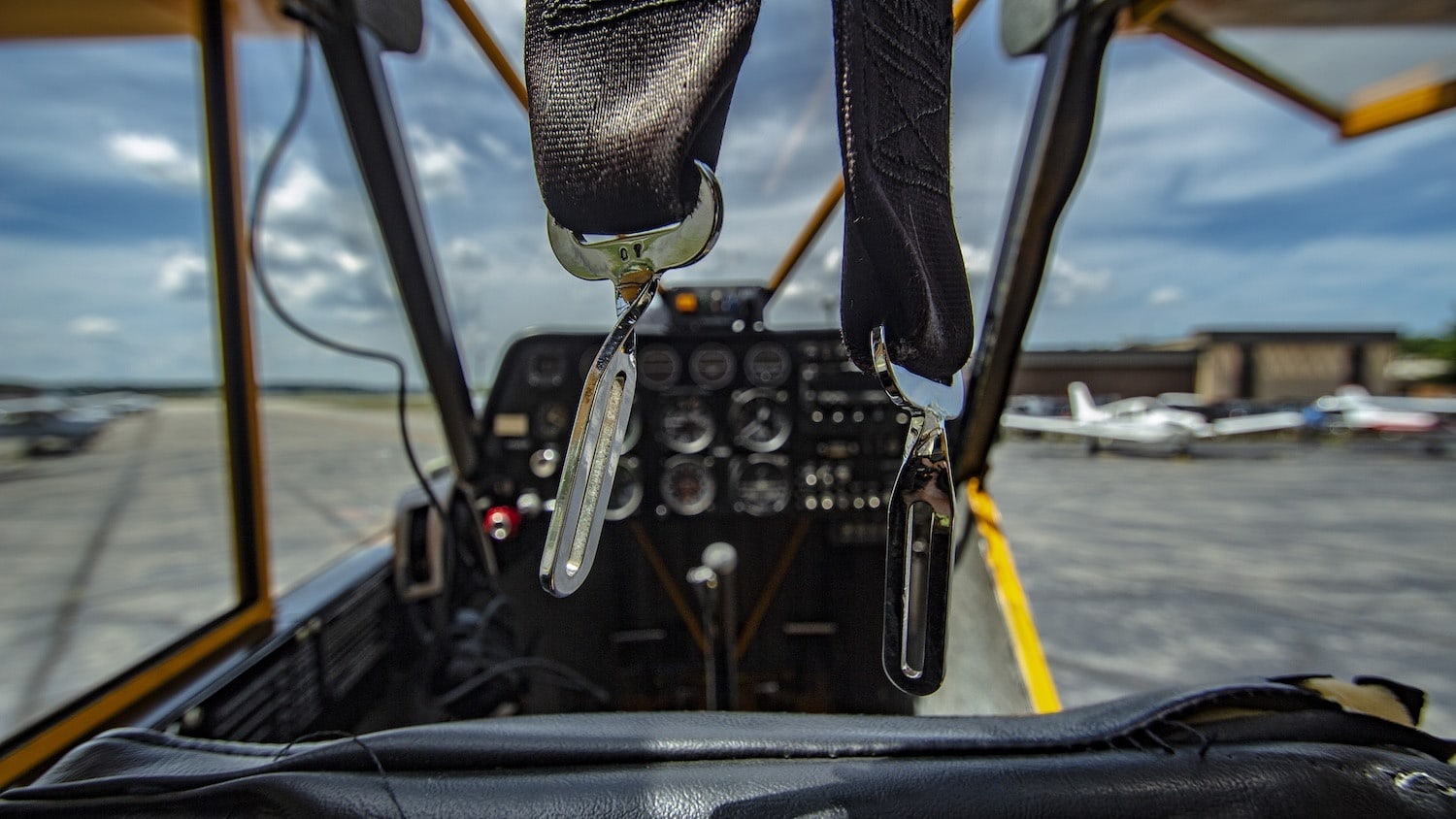 A bell hangs in the aviation office at NMC. It’s small, and you might miss it if you’re not paying attention. But when it rings, you can’t ignore it. It’s loud and bold—a declaration. Alex Bloye, the current director of NMC Aviation, tells me that whenever a student passes a flight test, whether it’s their first solo flight or they’ve earned a new rating (like their seaplane rating), they come in and ring the bell. And everyone in the office—doesn’t matter what they’re in the middle of—comes out and cheers.

We celebrate little victories here at NMC. Every one of them. —Alex Bloye, Director of NMC Aviation

644 Delta Romeo has had a lot of victories. From crash to recovery, every student who climbs aboard and each instructor who touches down—victory is in her wings. But to pilots, Alex tells me, every flight is just another adventure. 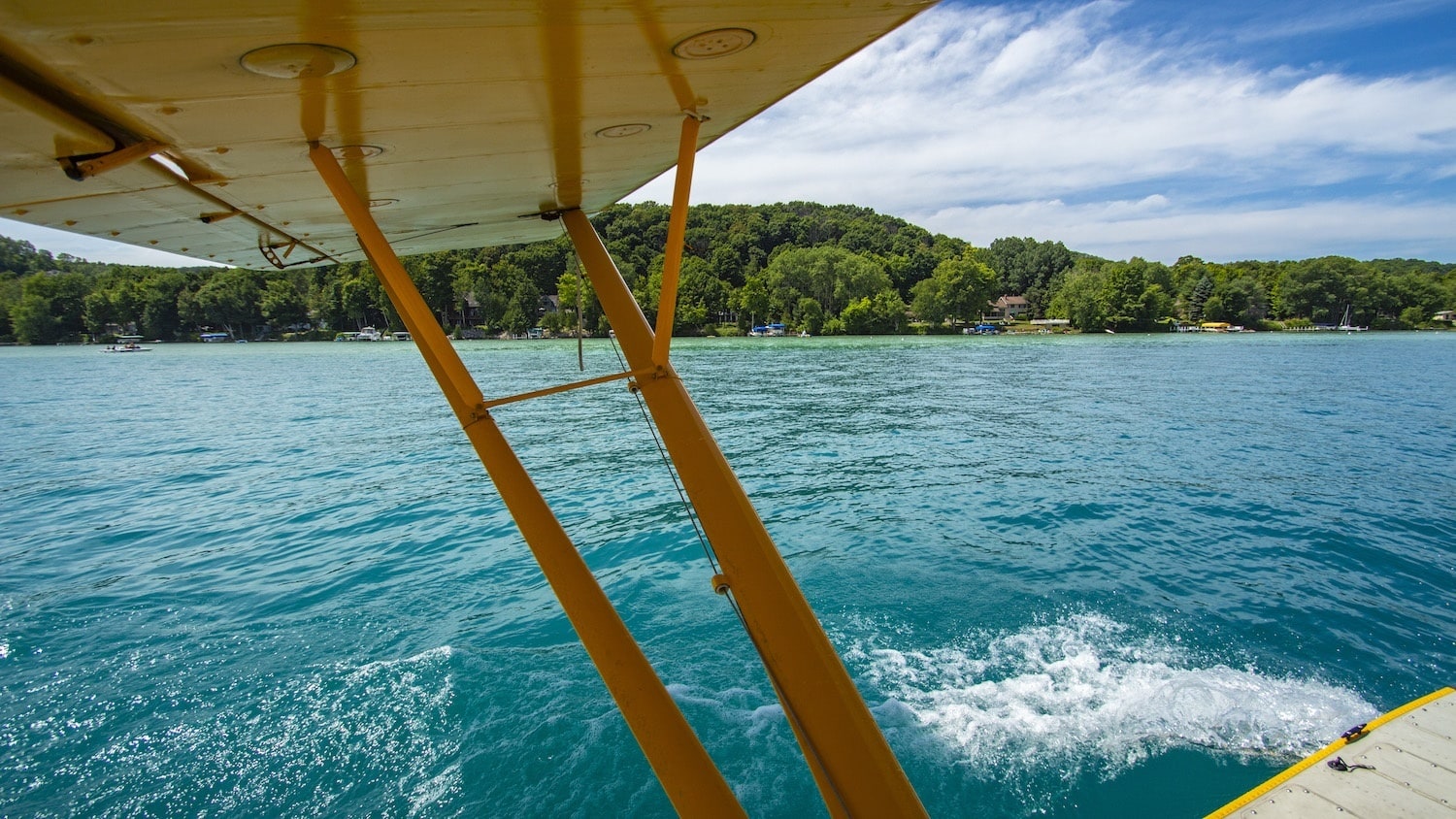 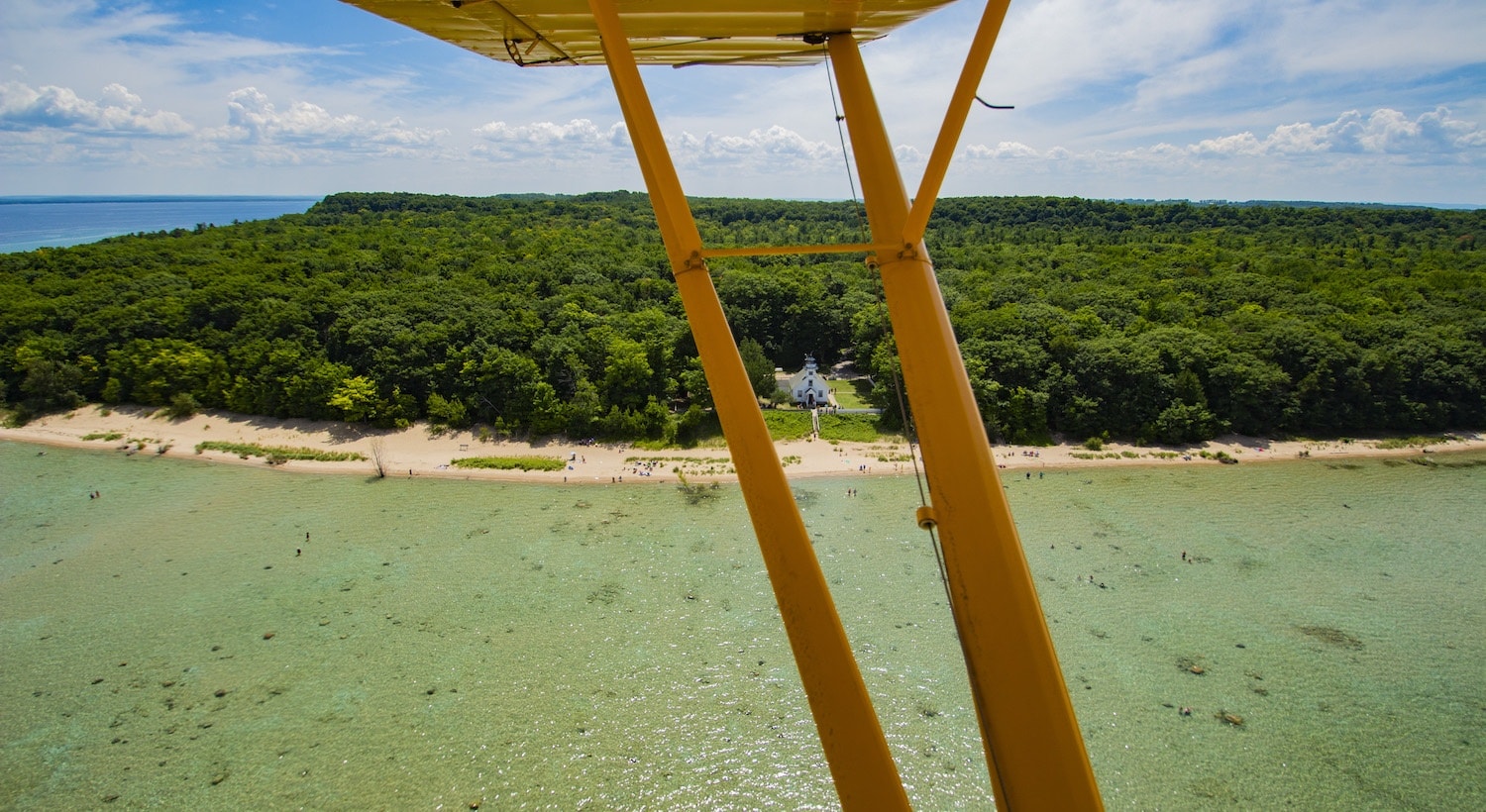 A very special thanks to the phenomenal staff at Northwestern Michigan College. Tours of the facilities are available upon request—and it’s completely worth it. If you’re interested in aviation, NMC has a diverse program from flight school to engineering, underwater drones and more. If you happen to see 644 Delta Romeo, snap a picture and share it with us on Facebook and Instagram at @mynorthmedia.

Thinking about applying?
Read “Inside the Cockpit at NMC’s Aviation Program.”