Sail the Great Lakes this September Aboard Tall Ship Manitou 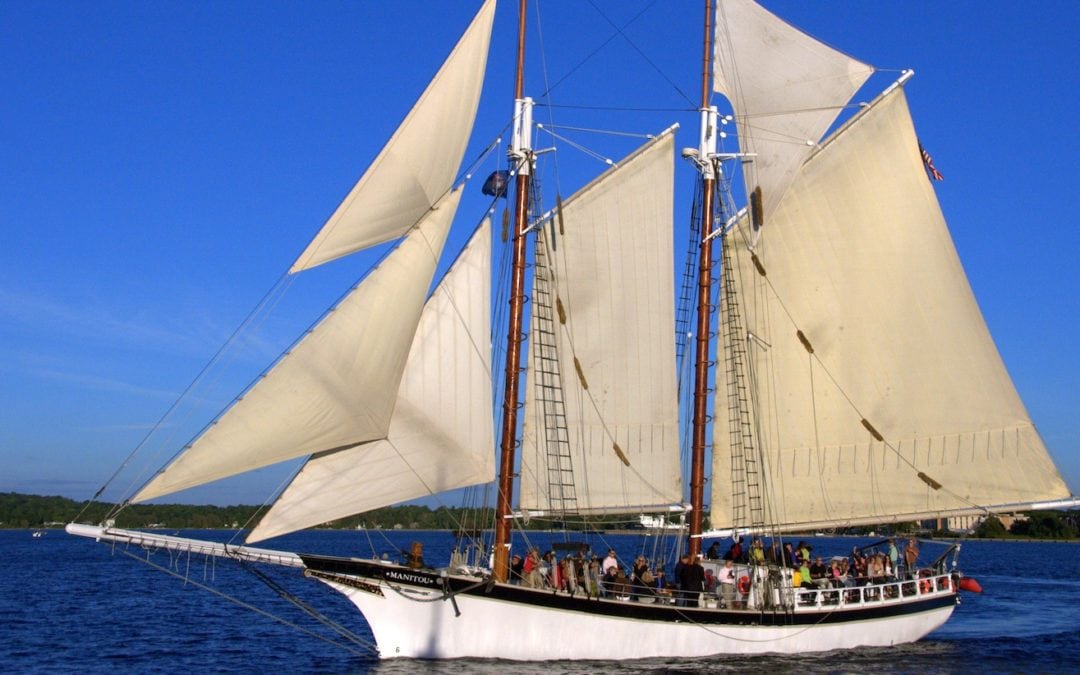 Board one of the largest sailing vessels in the Great Lakes for an autumn windjammer cruise. The Traverse Tall Ship Company still has openings on these  September voyages. In addition, enjoy a 20% discount on new bookings for the 3-Day Bay Getaway and the 4-Day Season Finale cruises.

Guided by a skilled crew, voyages set sail from Grand Traverse Bay aboard a replica of an 1800s cargo schooner. A traditional two-masted, gaff rigged, topsail schooner, Manitou measures 114 feet in length with more than 3,000 square feet of sail. Passengers are free to leave the sailing to the experienced crew, but it’s much more fun to lend a hand and learn the arts of the sailor. 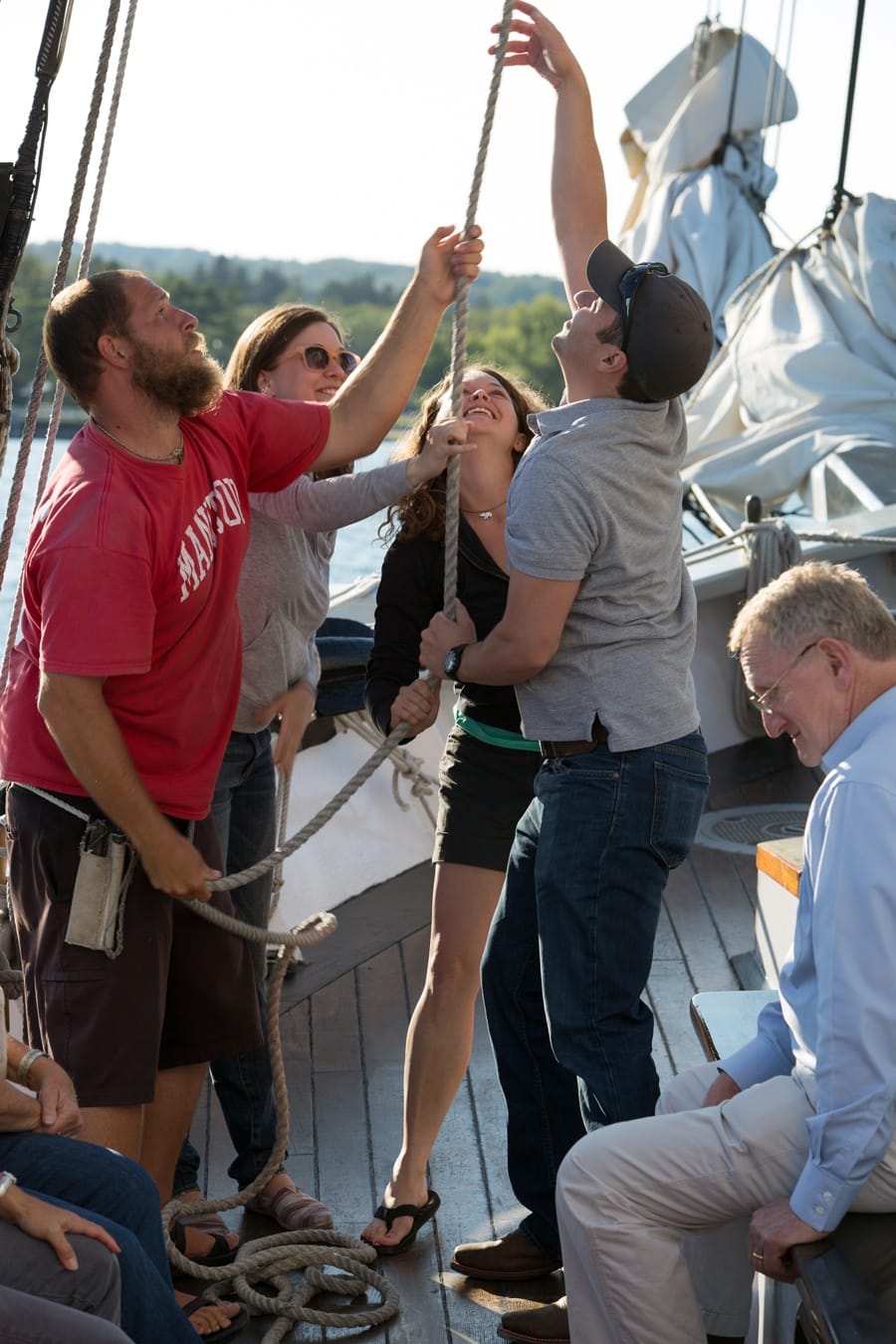 There is plenty of space for sitting and moving around Manitou’s deck while under sail on the freshwaters of Michigan’s inland seas. Settle in with a good book, watch the stars (and perhaps even the aurora borealis), play a game of cards, take photographs or engage in old-fashioned conversation. Unplug from technology—no television, internet, email or cell phones (unless you’re snapping selfies from the deck).

Trips are limited to 22 individuals, with accommodations provided in 11 double-bunk cabins. Fare includes lodging, all meals and sailing activities. Boarding takes place on the first day between 6-8 p.m. To make reservations for one of the multi-day windjammers, call toll free 800-678-0383 or order tickets online. Gift certificates are also available.

Traverse Tall Ship Company is located at 13258 S.W. Bay Shore Drive (M22) in Traverse City and shares a dock with the fleet from the Maritime Heritage Alliance.

This cruise is the perfect “get acquainted” windjammer for those who are intrigued by the idea of a sailing trip but leery of a big time or money commitment. Explore the beauty of the well-protected Grand Traverse Bay and its variety of anchorages.

Join Mary Stewart Adams as she guides you through a journey of the night sky. Mary is a star lore historian, storyteller and author who has been immersed in the history of star knowledge for nearly 30 years. Mary writes and speaks extensively to local, national and international audiences on our relationship to the night sky and its cultural consequences and has received numerous honors for her work. In addition, she is a member of the International Dark Sky Places Committee of the International Dark Sky Association (and former director of the Headlands International Dark Sky Park in Northern Michigan), protecting and designating dark sky sites around the world. Mary’s weekly radio program “The Storyteller’s Guide to the Night Sky” airs during Morning Edition on Interlochen Public Radio every Monday. 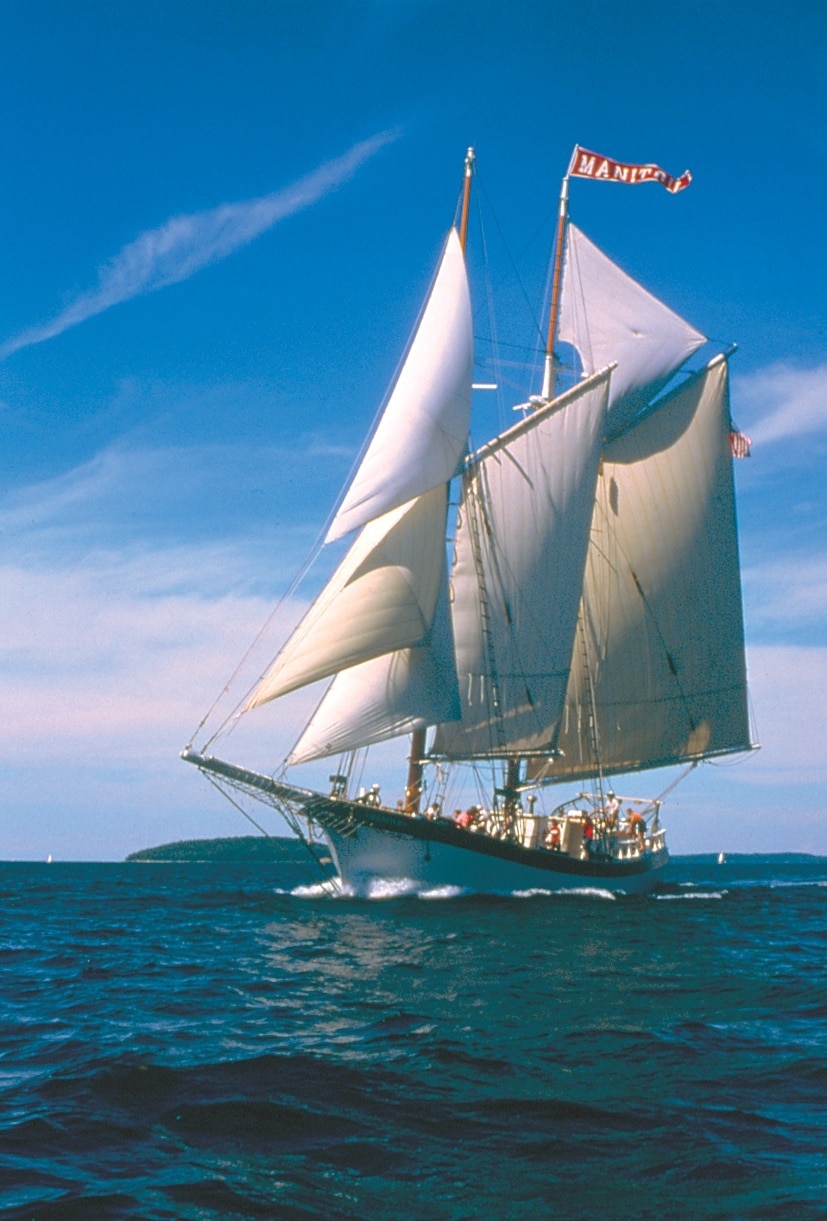 Explore the great wine regions of the world with sommelier Ryan Arnold as you discuss winemaking history and taste varietals from different countries—including wines paired with dinner each night. A graduate of the University of Montana, Ryan studied in both Torino and Rome during his college years, where he first fell in love with food and wine. In 2004, he began his career as a member of the opening team for Lettuce Entertain You Enterprises (LEYE) Chicago restaurant Osteria Via Stato, and was reintroduced to Italian wine in the states, further sparking his passion and inspiration to pursue a career in the wine business.

Let the stars be your guide as you round out the fall sailing season, your course determined by the wind. It’s likely Manitou will sail near the 200-acre Power Island toward the northern end of West Bay, just three miles off Bowers Harbor. It was also known as Marion Island or Ford Island, as auto giant Henry Ford owned it between 1917 and 1944. Maybe Manitou will make its way around the tip of the Leelanau Peninsula (where the Grand Traverse Lighthouse proudly sits, protecting the coastline) toward Cat Head Bay, a stunningly beautiful and quiet part of Leelanau State Park, featuring a remote shoreline and peaceful wooded hiking trails. If the winds are coming in from the southwest, Manitou may venture north toward Beaver Island, where Mormon leader James Strang declared himself king in 1850 before being assassinated just six years later by a few of his former followers.

The exact course of the trip cannot be determined in advance, as the captain and crew rely on the winds to guide the path of the ship. Yet, no matter what the route, the sights, sounds and stories meld together for a truly one-of-a-kind experience.

*Rates based on double occupancy.