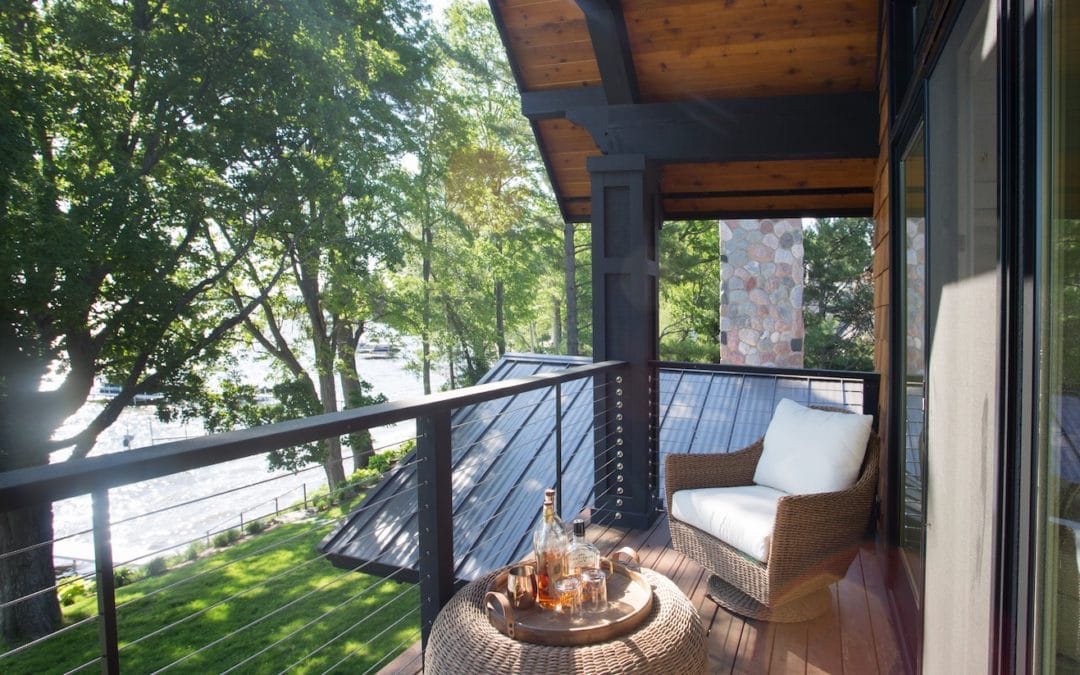 See the rest of this beautiful Burt Lake home on the Petoskey Area Home Tour September 15. 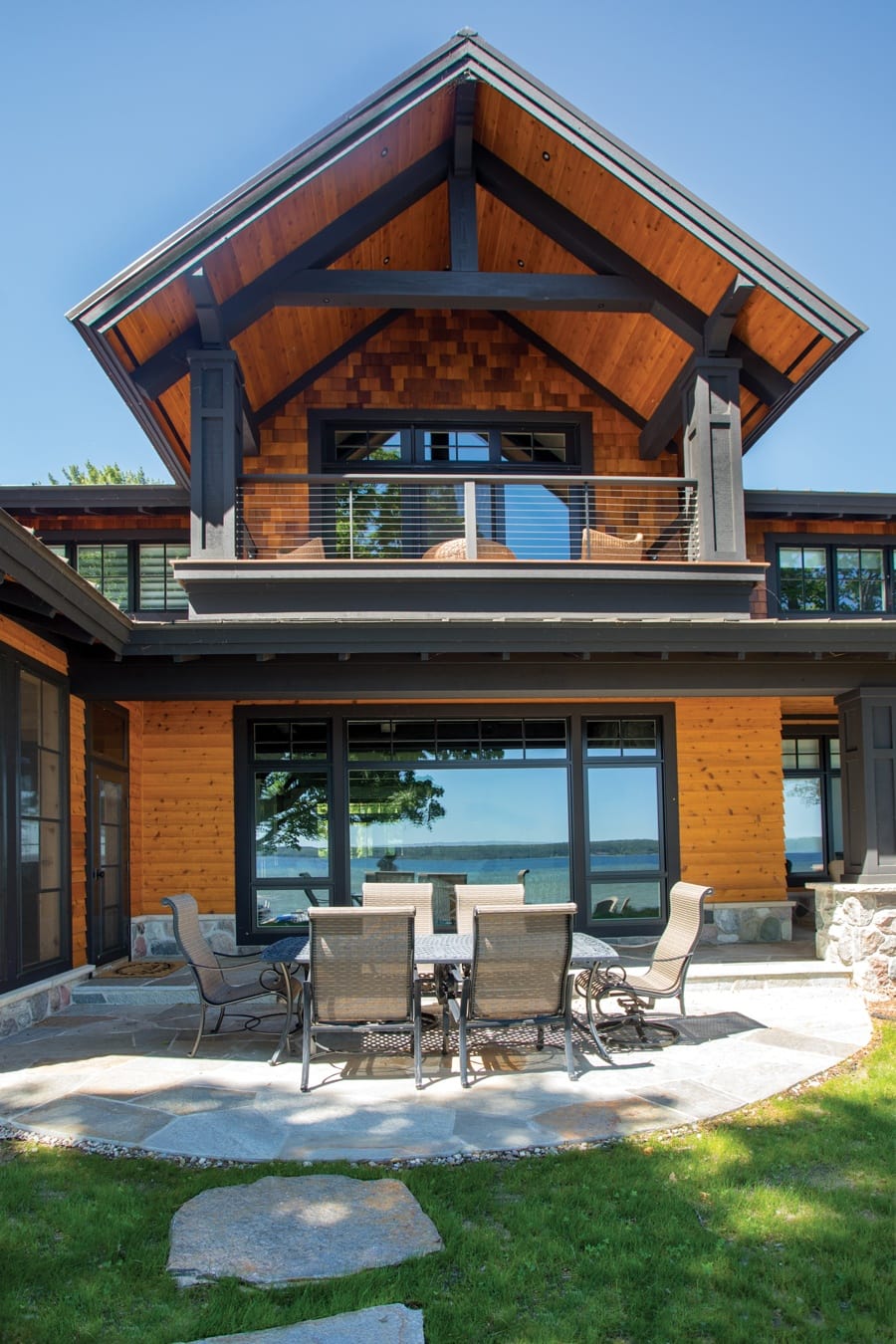 When a downstate couple bought their property on Burt Lake several years ago, they decided immediately that the outdated house on it had to go. But before they tore it down, they built a carriage house with a garage below so they could plan their dream cottage and, eventually, their retirement home.

Three years later, their house is ready for the joys of summer, and the couple, who have two kids and two dogs, says the process went smoothly and their 5,200-square-foot home is everything they dreamed of.

“The design went quickly,” says Stephanie Baldwin, whose Edgewater Design firm drew up the plans. “They were so easy to work with because they lived on the property for a few years and knew exactly what they wanted.” For the exterior, the couple hoped to match the carriage house that their builder, Greg Lee, initially constructed. “So when we designed the new house and attached garage, we added some of the detail from the new structure onto the exterior of the carriage house to tie the two together,” says Stephanie, who adds there were many moving parts to the exterior design including. “Lots of covered porches, split stone and cedar.” 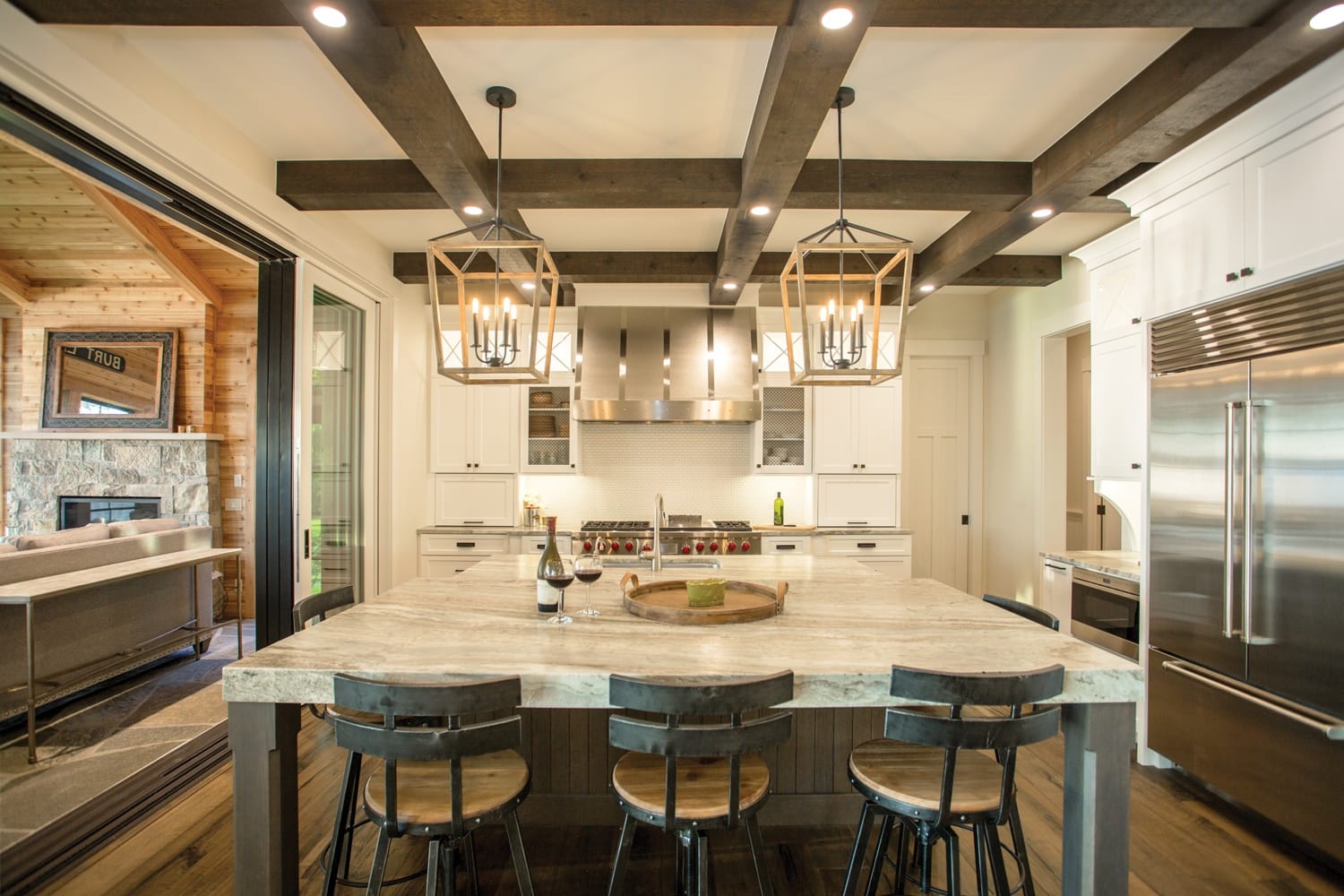 Inside, with its dark rustic beams and dark wood floors, there’s a rich, modern farmhouse feel. The linear, two-story structure affords views of Burt Lake from almost every room, and to allow even more communing with the great outdoors, a 16-foot pocket-door wall opens up off the kitchen to a stone-floored screened-in porch so this family can enjoy three seasons or more of the year.

“That’s my favorite room,” says the wife. “We spend all of our time out there. It gives you that feeling that you are right out there.” There’s plenty to see besides the lake, too: The red fox, the bald eagles, the families of deer that pass by their windows. “We really feel like we’re getting away from the city,” she says.

Her husband is wild about the professional-quality kitchen, where he’s the chef, and looks forward to creating the next Thanksgiving dinner. They both adore the upstairs master’s balcony in their 4-bedroom, 3 1/2-bath cottage. 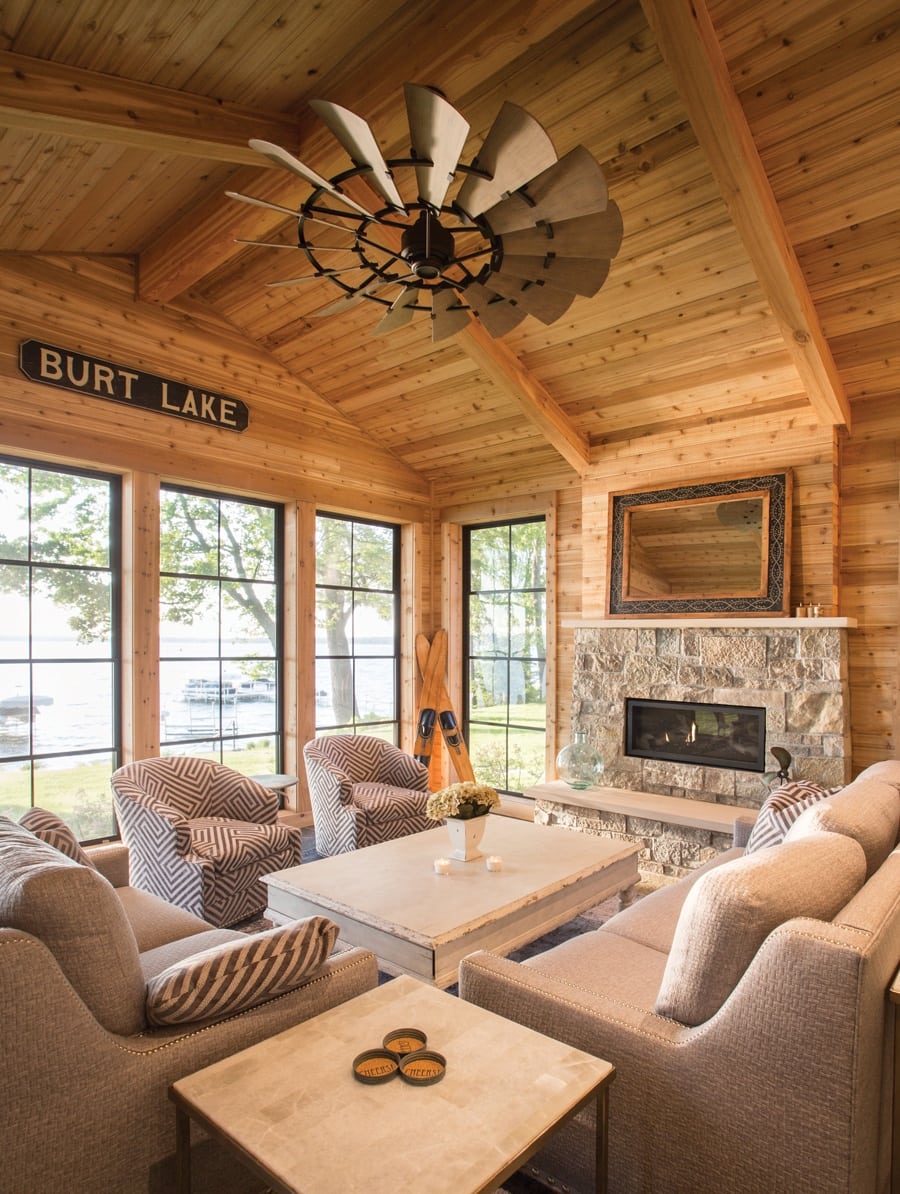 In fact, this family loves every detail, all of the form and function, all designed specifically for them: The mix of materials and textures, from the granite counters to the shiplap walls; the built-in cabinetry; the second-floor laundry room; the four fireplaces, including one in the three-season room; the two master suites, one on each floor, the lower “for when we’re too old to climb the stairs,” the wife laughs; the side drains in their master shower that builder Greg talked them into so they don’t have to step on a drain; the handsome transom windows, and the surrounding wooded lot that the house nestles into perfectly, like it has been there forever.

“We couldn’t even believe it when it was done,” says the wife. “It’s our dream house, but it turned out even better.” 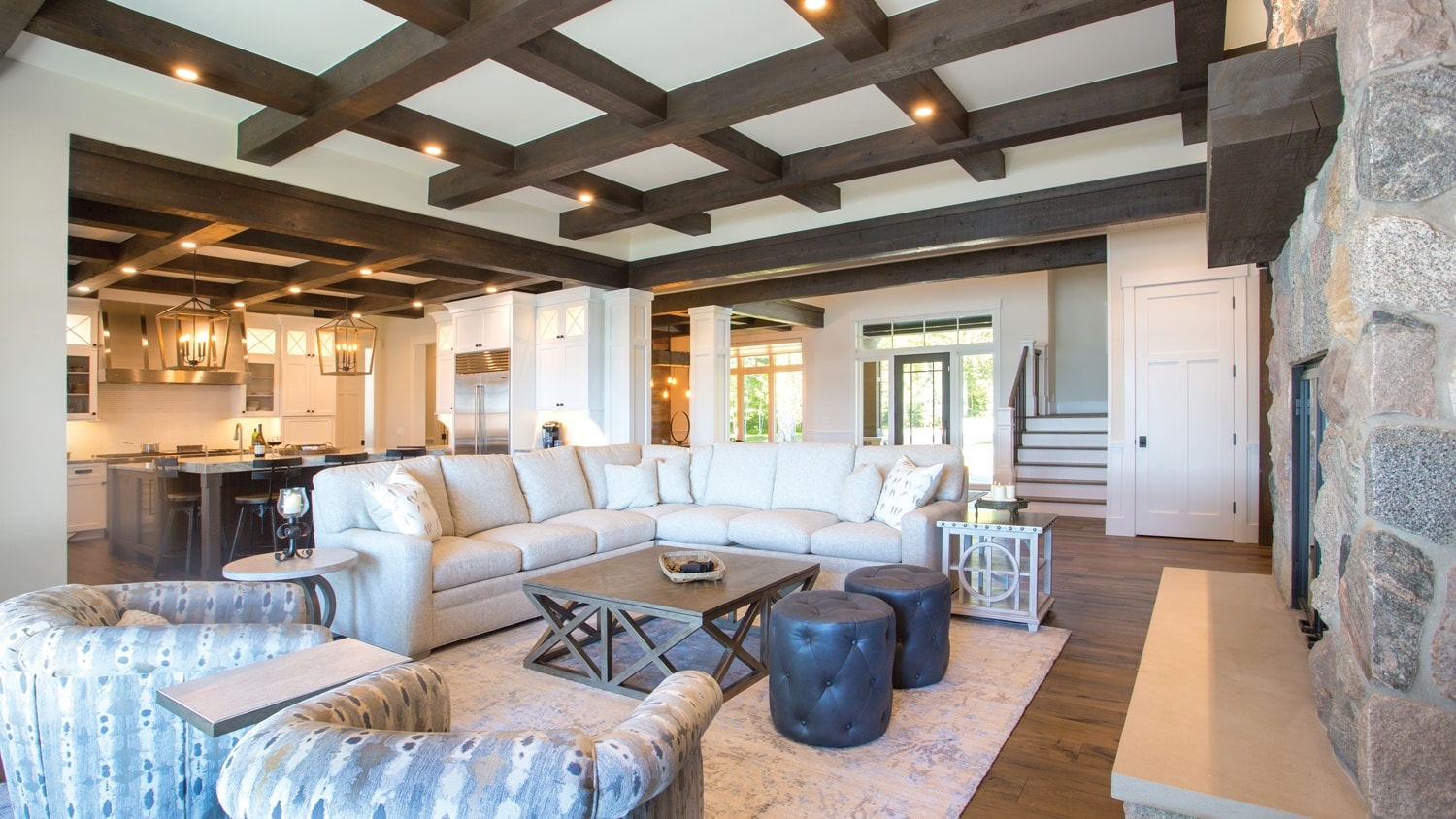 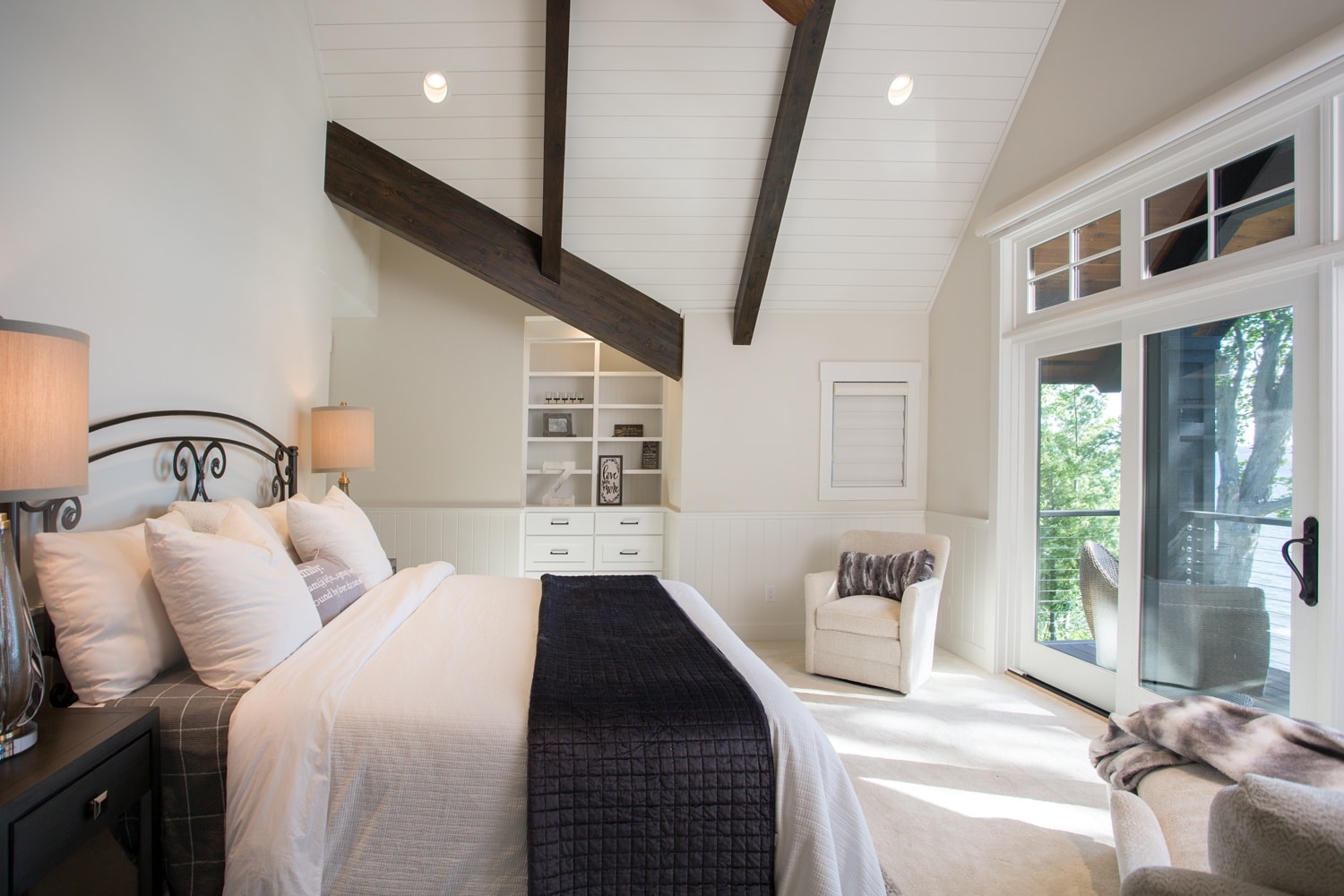 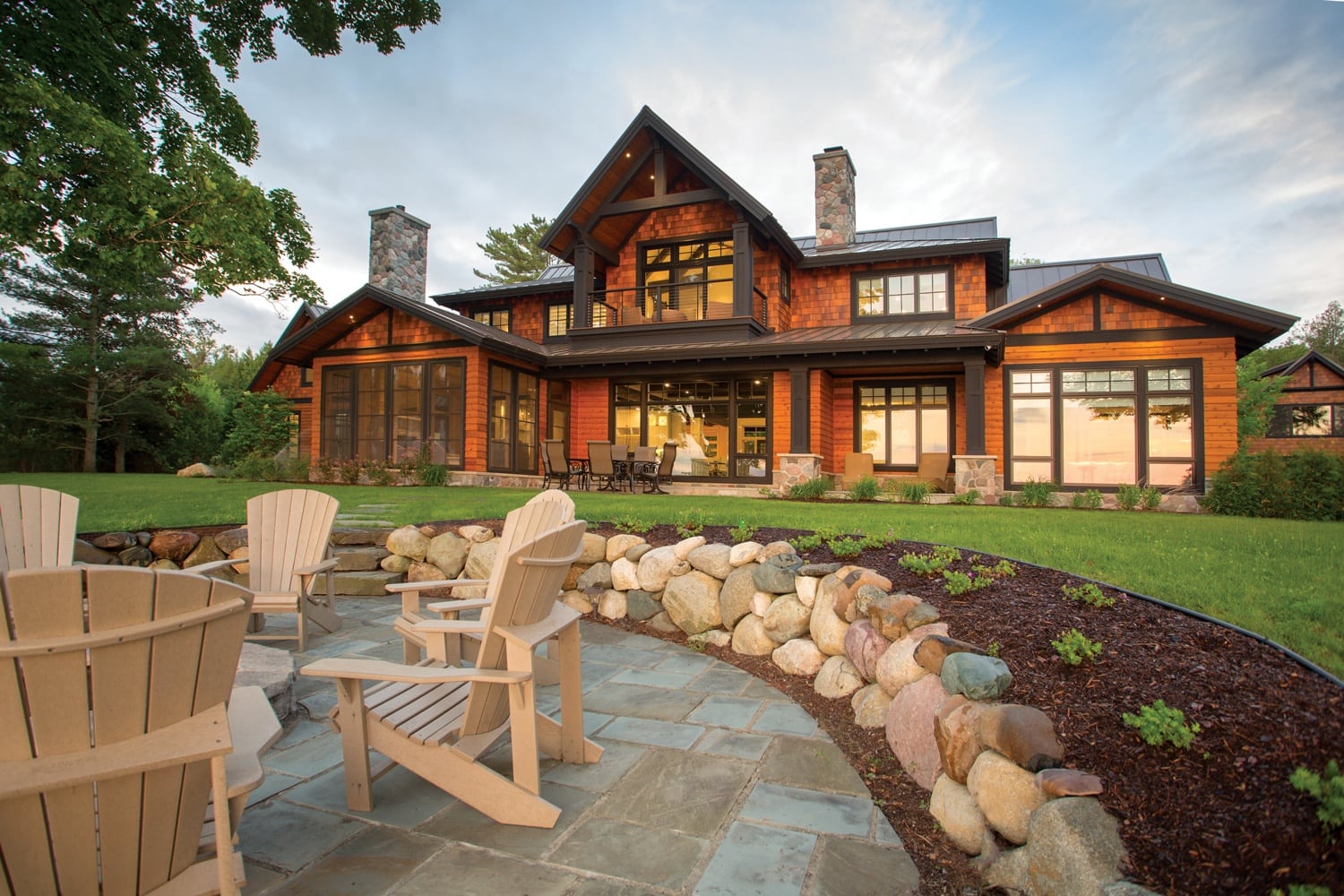