According to the North American Conservation Center, there are more than 50 species of wild orchids in Michigan. Last spring, James Dake set out to photograph a few of the rare flowers. His mission landed him in bogs near the Straits of Mackinac, on the trails of Maple Bay, and in the wetlands of Grass River Natural Area where he currently serves as education director. Dani Knoph checks in to find out how his research is unfolding.

What sparked your interest in Michigan orchids?

I became interested in wildflowers about 12 years ago, and have been photographing them ever since. My research on orchids started a few years back when I began work on Grass River Natural Area’s Field Guide to Northwest Michigan. While researching, I made some really nerdy lists. I was trying to decide what wildflowers to include, so I started with the maximum but scaled it back based on what people are likely to encounter on the trail. 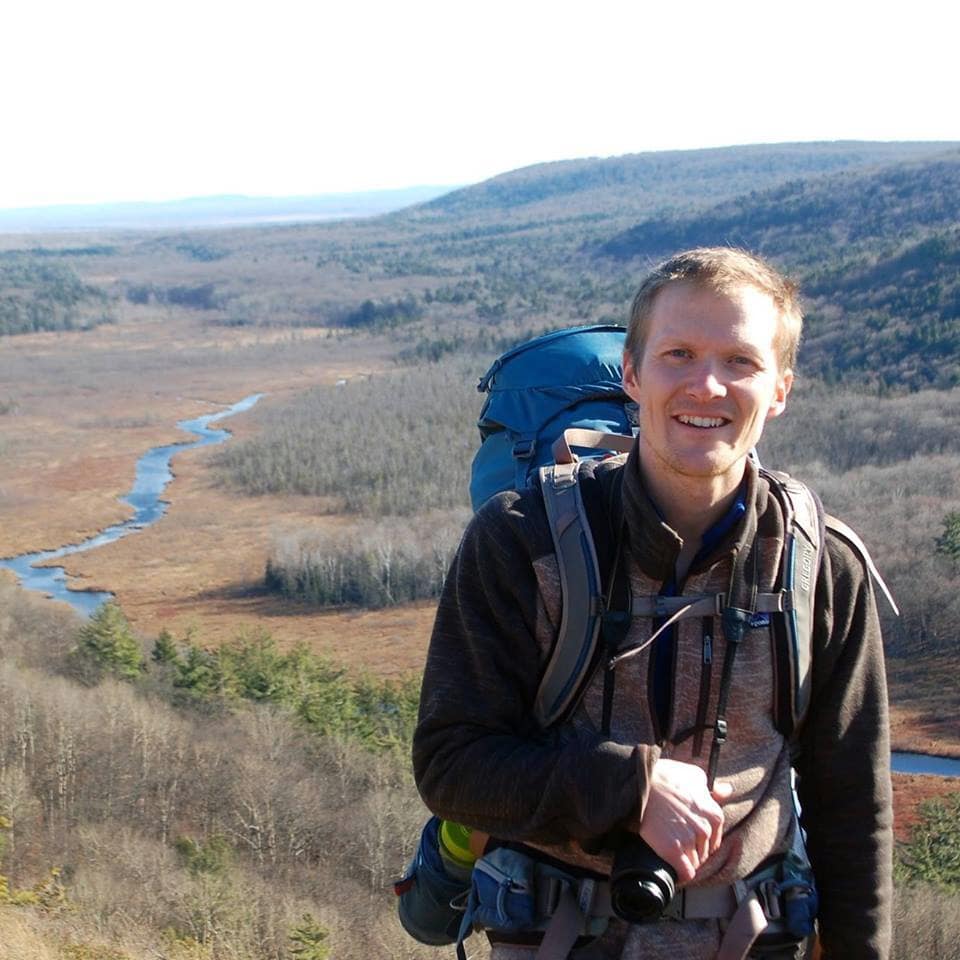 I learned that the University of Michigan Herbarium rates plants by what they call a “Coefficient of Conservatism.” It’s a scale of zero to ten. Basically, zero is weedy and can grow anywhere. Tens are rare and only grow in specific high-quality habitats. So I organized my list from tens to zeros. Of course, many of the tens I’d never seen before. They are the types that you have to set out to find.

Yes, I wanted to see them for myself. When I began a separate list of wildflowers that I wanted to capture, I noticed that at least half of them ended up being orchids. These would be the flowers I’d try to find.

Tell me more about your search this year. What species did you set out to find?

First, I went looking for Calypso, Ram’s Head Lady Slipper and Dwarf Lake Iris—which isn’t an orchid but I wanted to see that one because it’s Michigan’s State wildflower. So my wife and I searched for them during Memorial Day weekend. May is a good time to start looking. We found the Dwarf Lake Iris, but we struck out on the other two. We were in a few different areas by the Straits of Mackinac. 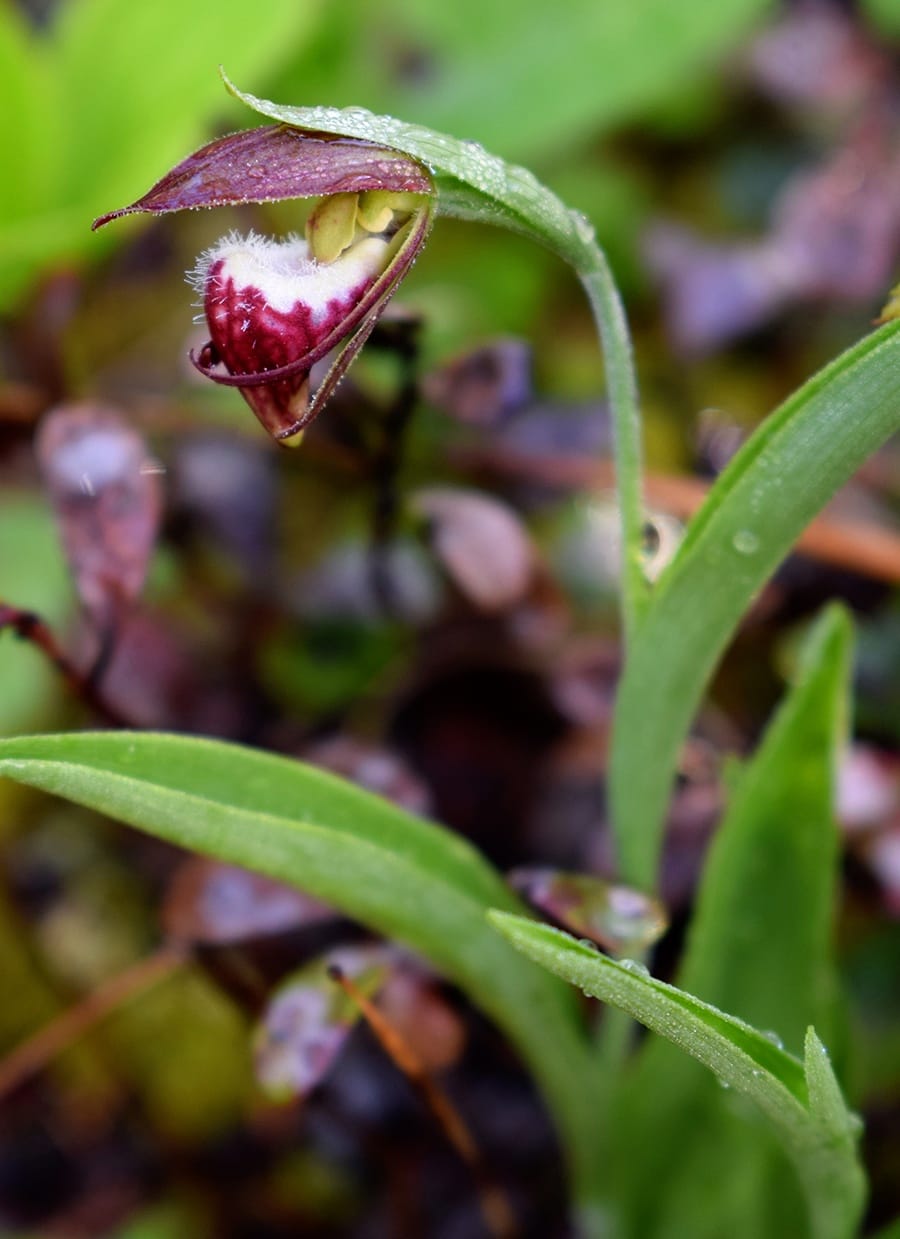 So what was plan B for finding the Calypso and Ram’s Head?

I thought I’d better ask for help. It’s fun to go out and find them on your own but there are people who already know the good spots. So I reached out to the Little Traverse Conservancy and they connected me to a man who told me, “I need to get out there fast! The orchids are fading.” So he said, “How about tomorrow?” I woke up at 4 a.m. the next morning and drove up to Mackinac where he showed me a bunch of spots. I got to see Calypso and Ram’s Head, and other orchids I wasn’t looking for, like Heartleaf Twayblade—a small green orchid.

After this adventure, I started finding more at Grass River Natural Area—some of the later-season orchids, like Arethusa/Dragon’s Mouth, Grass Pink, Rose Pogonia.

Is orchid poaching a real thing?

In the spring, you might come across areas where showy Lady Slipper grows and see holes where people have dug them up. There are people who will find orchids and try to take them home because they’re pretty. Then they’ll plant them in their yard and often this doesn’t work well because orchids are sensitive and need particular growing conditions. The orchids end up dying which is unfortunate. This is why I encourage people to observe and leave them in their wild habitat.

When I was young my father taught me how to identify Lady Slipper, but I had no idea they were considered orchids! What is it that sets an orchid apart from other flowers?

Orchids are in their own plant family, Orchidaceae. They often have showy intricate flowers. Many are very colorful and have a tropical look, but some are very small and hardly noticeable when you’re out searching. What’s special about their root system—which is why they can’t be easily transplanted—is that their seed and roots rely on fungi that live underground. So when an orchid seed falls, it needs mycorrhizal fungi to invade it in order for it to grow and take root. If you dig up a wild orchid, that fungus might not come along with it. Orchids and fungi have a symbiotic relationship.

Many orchids have ovaries that are twisted and inverted, setting them apart from other flowers, with the exception of Grass Pink and some others. Pollination is a factor in the design. Rather than entering downward, pollinators will crawl up and into the orchid.

Is there anything that surprised you during your research?

If we’re really honest, we can admit that there is no true wilderness left. Pretty much anywhere you go, the fingerprint of humanity is there. We’ve touched every part of the earth. But orchids and other rare plants that grow in hidden areas represent special places where wilderness is resilient. Even though they are rare and sensitive, orchids are still here, hiding in small pockets of our natural areas.

For folks who want to go out and discover some of these pockets, or who simply want to learn more about Michigan orchids, are there resources you recommend checking out?

Orchids of the North Woods Field Guide is fantastic. It focuses on Northern Michigan, Canada, and Minnesota. On the nerdy, technical side you can look on Michigan Herbarium’s website which is basically an online version of the book Michigan Flora. It’s like a giant key to every plant in Michigan.