Vacuum Lamps? Windmill Chandeliers? Dave Wood at Grey Wolf Creek Does it All 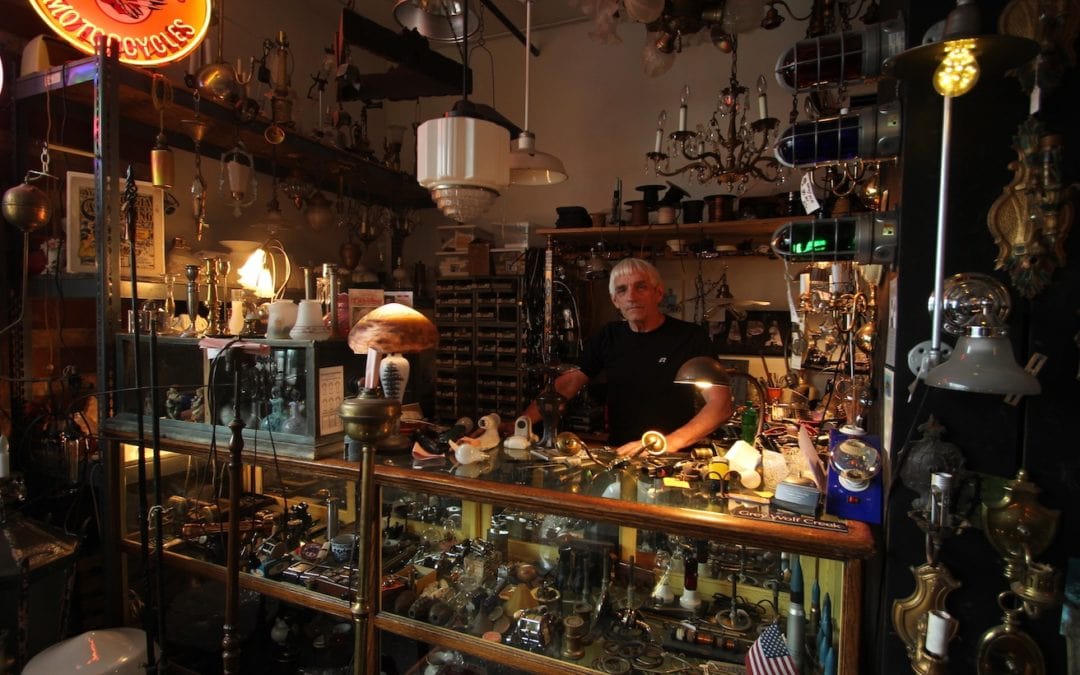 Dave Wood’s love for repurposing started 40 years ago when he bought a cobalt Selters bottle and converted it into a lamp. Today, he uses his Traverse City business, Grey Wolf Creek, to continue pursuing his craft, transforming everything from typewriters to windmills into brilliantly creative decor.

For Your Home Projects

If you’re on the hunt for novelty lamps for your home, Dave should be on your radar. He takes everything and anything and transforms it into modern art lamps. His shop, Grey Wolf Creek, is the place to request your dream light apparatus. Homes across the United States feature Dave’s decor, and no two creations are exactly alike. “I think it’s because people want something unique—personal to them. And that’s what I like to make,” he says.

At Grey Wolf Creek you can buy already created masterpieces or talk with Dave about a custom project you’ve had kicking around your brain. Or, if you’ve got an old lamp laying around that needs a craftsman’s eye, Dave is your guy. When asked if he has any pictures of his work he says, “No, because everything is a fresh start.” He does write down ideas though for future projects to try his hand at.

“My wife jokes about how I wake up in the middle of the night to write down new ideas in my notebook.” As if a literal light went off in his head and woke him from his sleep. 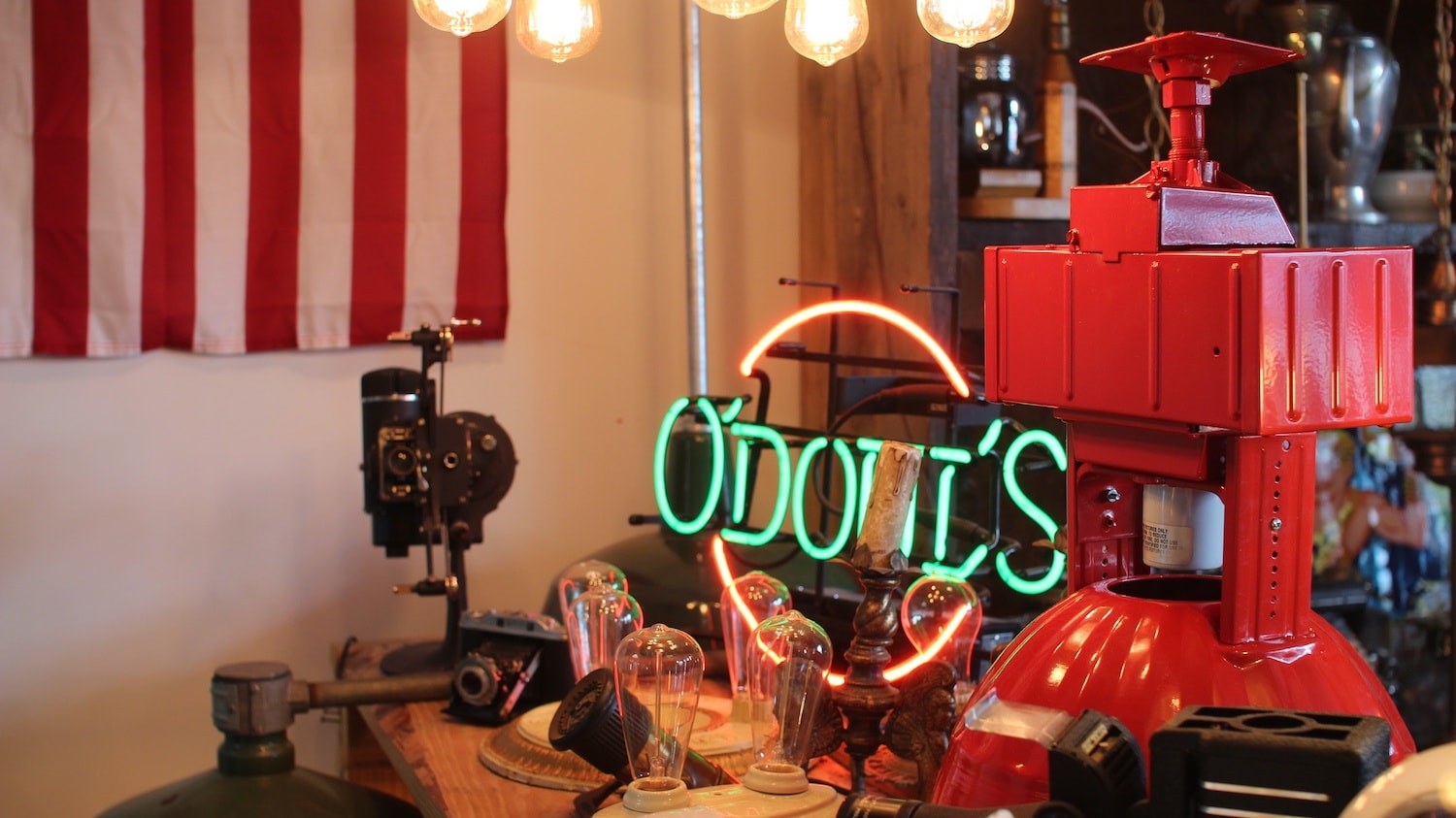 A Master of DIY Design

Dave is certainly a guru when it comes to the craft of repurposing. He’s mastered the skill by traveling all over the country, working with his hands on whatever needed a fix-up. And although his feet have carried him everywhere, Dave is back in his hometown as a Traverse City native.

Though he can usually “turn anything into anything,” he adds with a humorous modesty that, “sometimes things don’t work out, but hey, that’s part of it.” But his signature craft is converting things into lamps—vaccum cleaners, typewriters, a chicken brooder lid, old cameras. “You can turn just about anything into a lamp.”

His shop serves as a make-shift creative-recycle center. “A lot of people ask if they can give me stuff because they don’t want to throw it away, and they know I’ll do something cool with it,” he says. Anything Dave doesn’t repurpose gets recycled—all the unused cords, steel, and scraps of material. He’s a man that knows the value of reuse.

Everywhere you look at Grey Wolf Creek you’ll see thingamajigs and whatchamacallits transformed by the power of light. His creations use bulbs of every shape and size, each with its own warm, vibrant glow. Walking through his shop feels like entering an enchanted piece of history with sparks of magic blipping all around. Dave typically works with the famous Edison bulbs because of their easy-on-the-eyes yellow glow that pairs industrial fashion with modern art. “Today, tech has gotten really good and the bulbs still look old while maintaining a long lifespan,” he says. 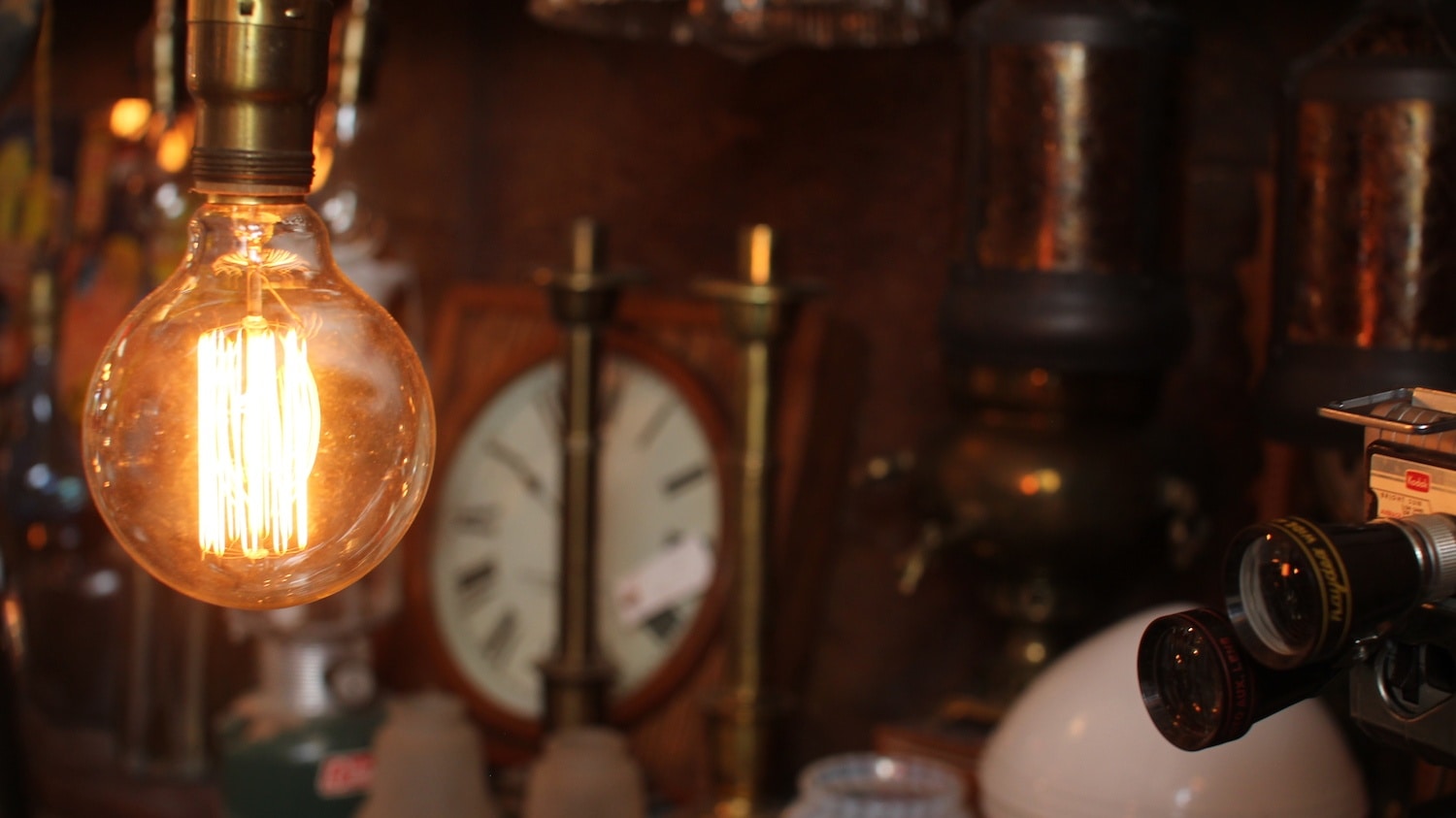 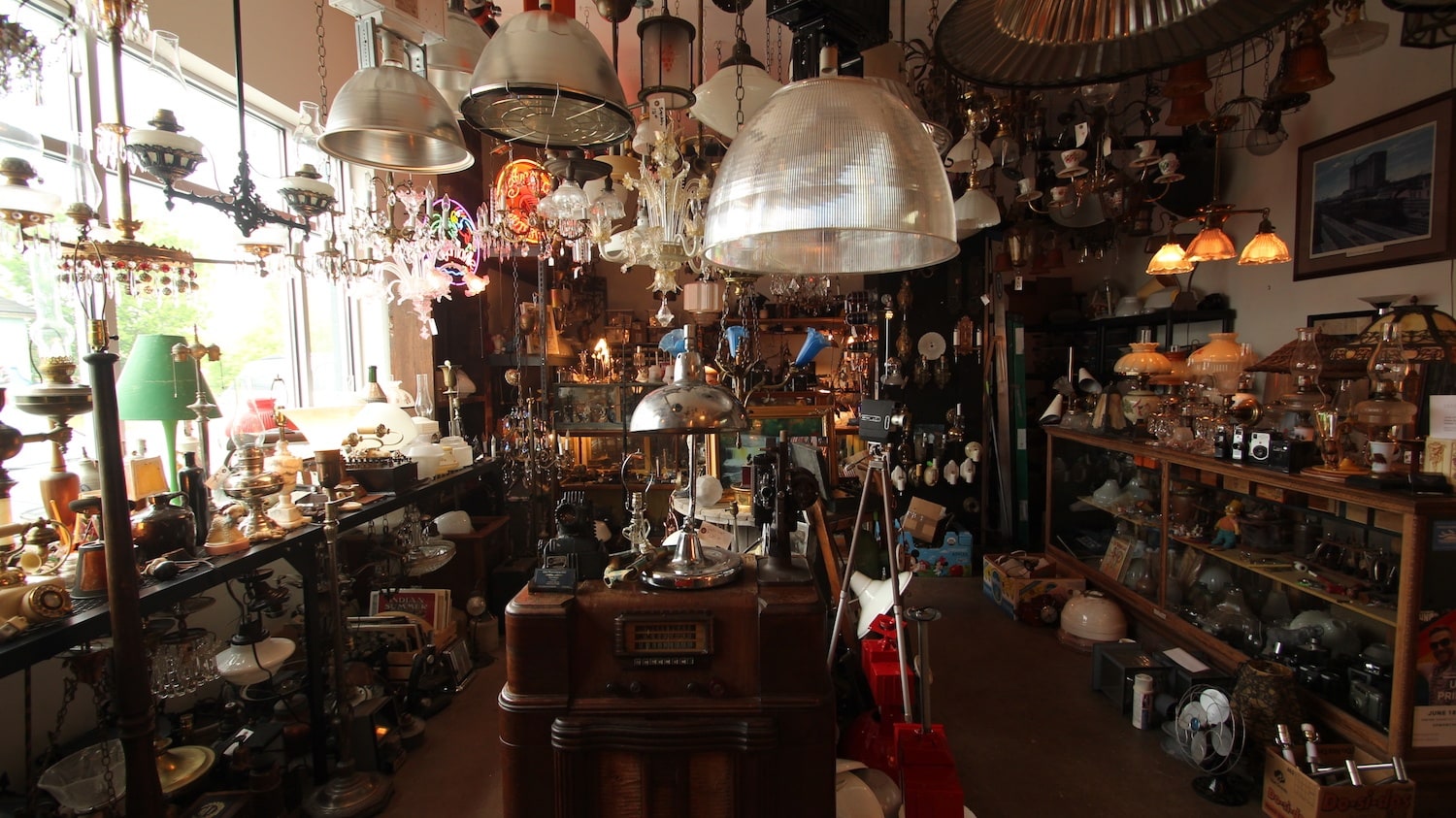 It’s the creative challenge that pushes him. Fixing things is in his blood. One time he converted an old amethyst geode from a hunk of rock into a glowing statue. “We took a strip of LED and broke pieces off—back when LED was only in strips—and put it all over the inside of the geode and when that thing lit up … it was unbelievable.” The craftsman glows when he talks about his projects.

Dave got into the full-time business of creative-conversions after he injured his back working at an oil field. Doctors recommended not doing manual labor, but he was stubborn and didn’t really listen. Over the years, the injury grew worse and forced him to shift career directions. Seeing an opportunity, he started Grey Wolf Creek as a way to make money off his hobby. He thought the business would stay small and maybe even speed up his retirement plans. He looks at me when he says this, in his shop that’s nearly bursting at the seams, and laughs, “except … yeah.” 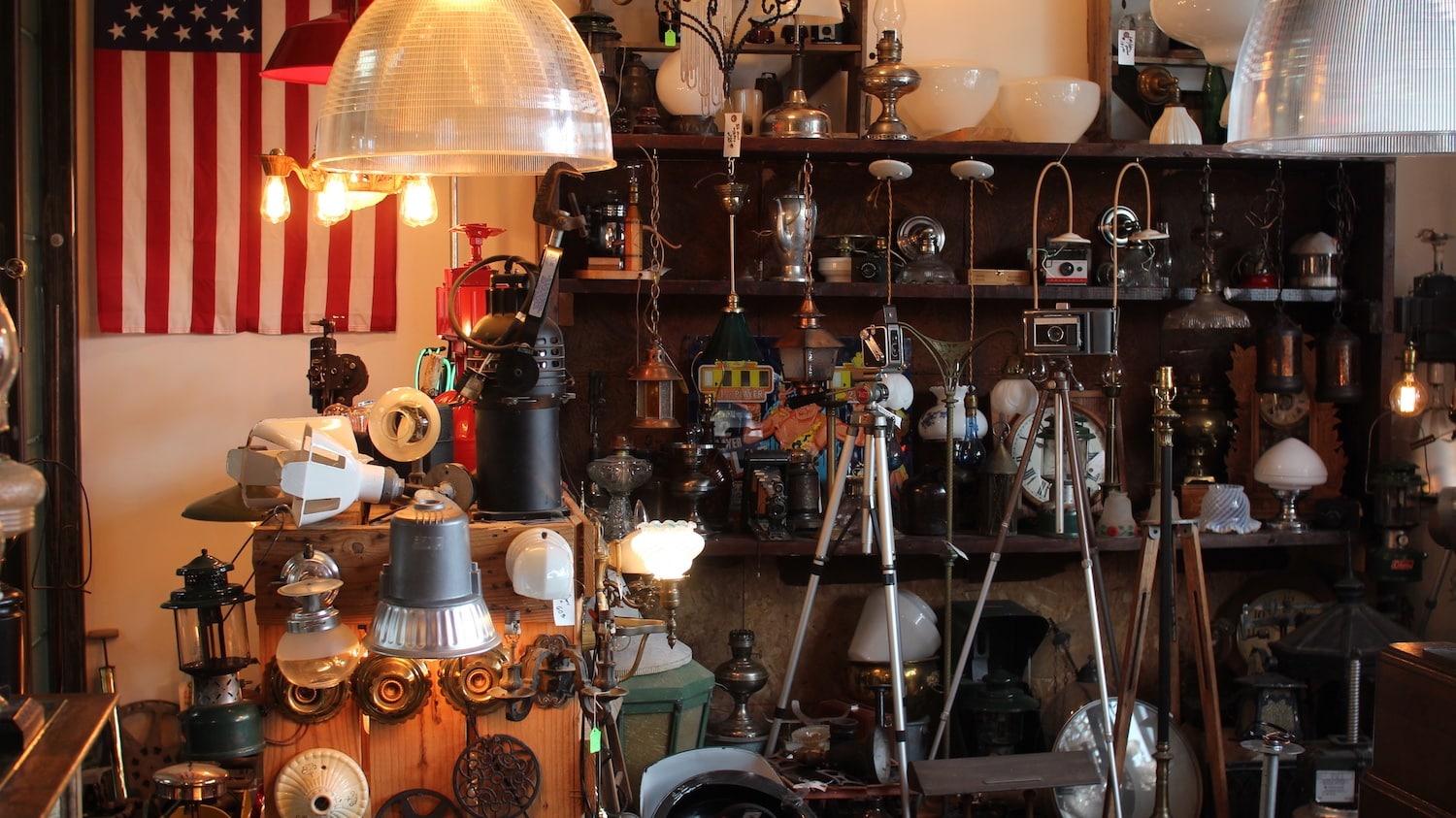 But a creative mind never truly stops. Dave attests to working on things practically every day here at Grey Wolf Creek. He purchased the Traverse City light shop five years back from an old lighting company after the renovation of the Warehouse MRKT where it’s located. But it’s not where Dave creates his masterpieces. The light repair shop is for small light repair—funny enough. His master-crafting happens in a different warehouse. There he has all the tools needed for projects—bizzare projects—like repurposing an old 60-foot windmill. “I’ve actually had three of them,” he adds. Right now he’s in the process of converting an 1870 cast-iron/galvanized steel windmill-fan into a chandelier.

What started as a pastime when he was 14 has been repurposed into a full-time career. On the side, he enjoys fixing up cars and mud-bogging, an activity he says he can’t quite grow out of. Whatever your Northern Michigan home design adventures have in store, reach out to Dave for a little bit of light. 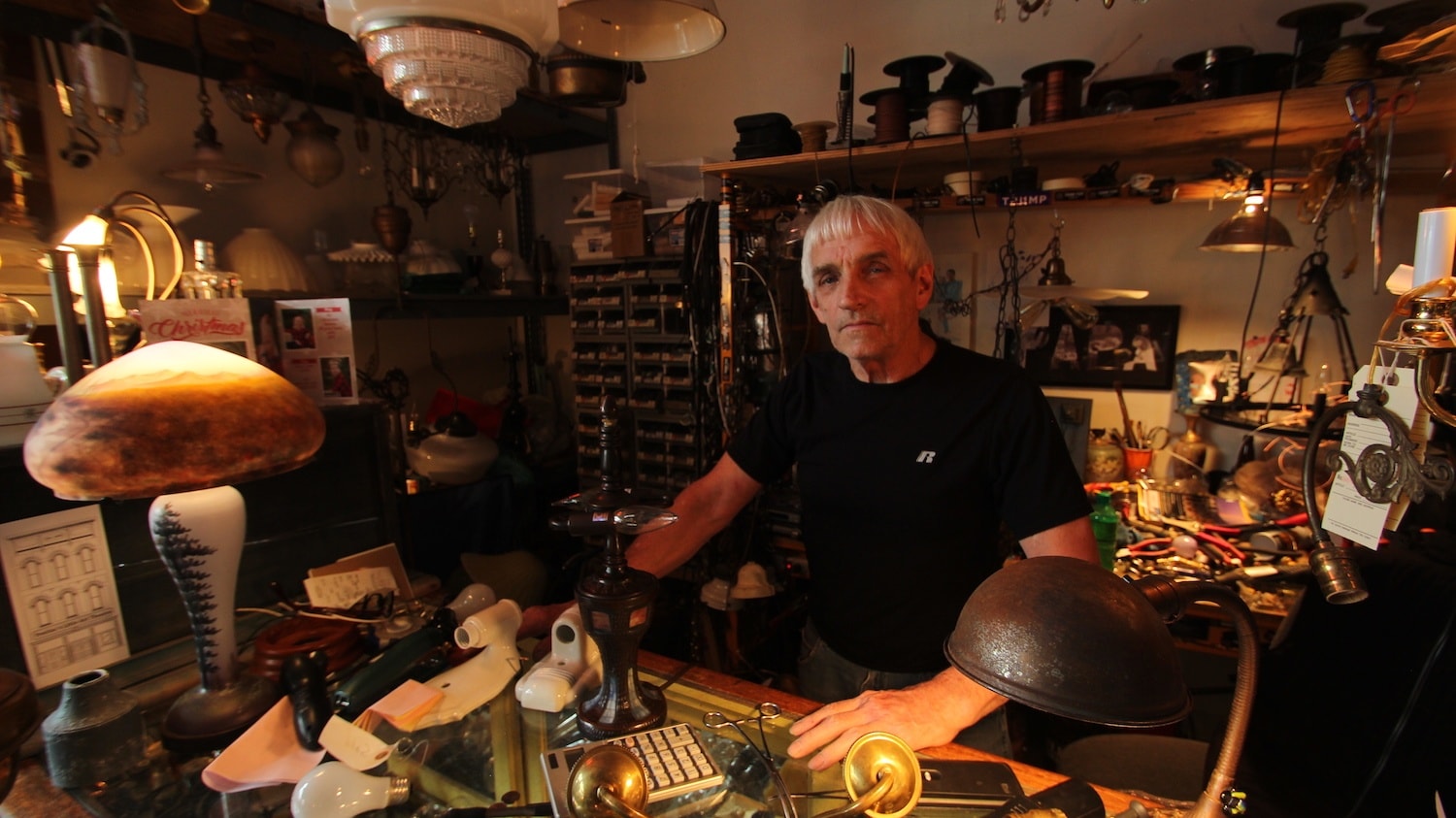 Things to do in Traverse City