They didn’t know how to run a business, and they only sorta knew how to bake a pie. This is the origin story of Grand Traverse Pie Co.

To call the Grand Traverse Pie Co. simply a pie company would be an understatement. But, yes, it is a pie company. Every morning, there’s a selection of about two dozen pies— apple, cherry, blueberry, mixed berry, lemon meringue, pecan and key lime, to name a few. But GT Pie is also a bakery. A coffeehouse. A cafe. And it’s also a socially conscious business, with an eye on helping the disadvantaged in the community, especially children.

A staple on West Front Street for more than two decades, Grand Traverse Pie Co. is still owned by the same family, Mike and Denise Busley, Michigan State University graduates who made their way north after a long stretch on the West Coast. The couple purposely planted their business in Traverse City and through hard work and good timing, transformed the small storefront into an iconic regional brand, with a footprint across Michigan (and a toe in Indiana). “Believe it or not, when we opened there were no cherry pie companies in Traverse City,” recalls Mike Busley, still slightly astonished that the nation’s Cherry Capital did not have a branded cherry pie maker. “There were bakeries selling cherry pies but no one had a brand selling what the region is known for. We really had no competition.” 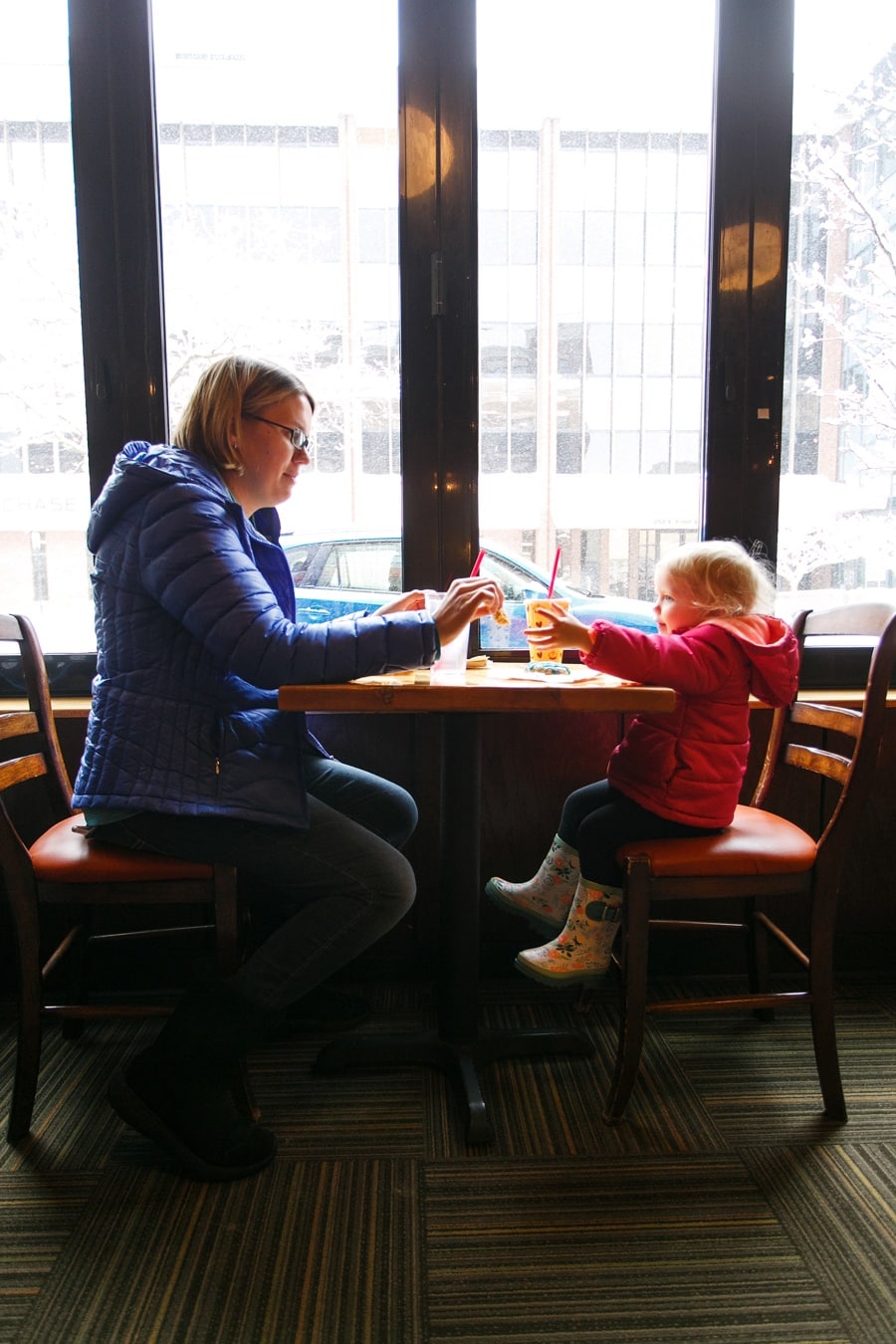 Incredibly, neither Mike nor Denise came to the business with a culinary background or ties to Traverse City, beyond visits while they were dating as students at Michigan State. “Once you come to Traverse City, it’s a draw,” says Denise, recounting their story over a cup of coffee at the original West Front Street shop, crowded with tourists and locals on a postcard-perfect summer morning.

That shop, one of 15 in Michigan and Indiana, resembles the others: a counter display stacked with pies, an open kitchen with ovens and other machinery in full view, and a decor of cherry-pie red, tan and brown colors, surrounding wooden tables. The shops invite lingering, community.

“There’s just something about pie,” Denise muses. “We didn’t invent pie, obviously. Pie brings everyone together. We feel so blessed. It was a bit of timing, hard work, luck and determination.”

After graduating from college, the couple made their way to San Diego, where Mike pursued a career in civil engineering and Denise became immersed in the medical field, selling orthopedic devices. They began raising a family.

Nearly two decades later, as they approached 40, they found themselves at the proverbial fork in the road. Worried about job security in Mike’s field and concerned about quality of life issues, they began rethinking their future. Denise had already left the medical field for other pursuits, including becoming a nanny for her daughter’s kindergarten teacher.

Going into business for themselves seemed a viable option. But what kind of business? 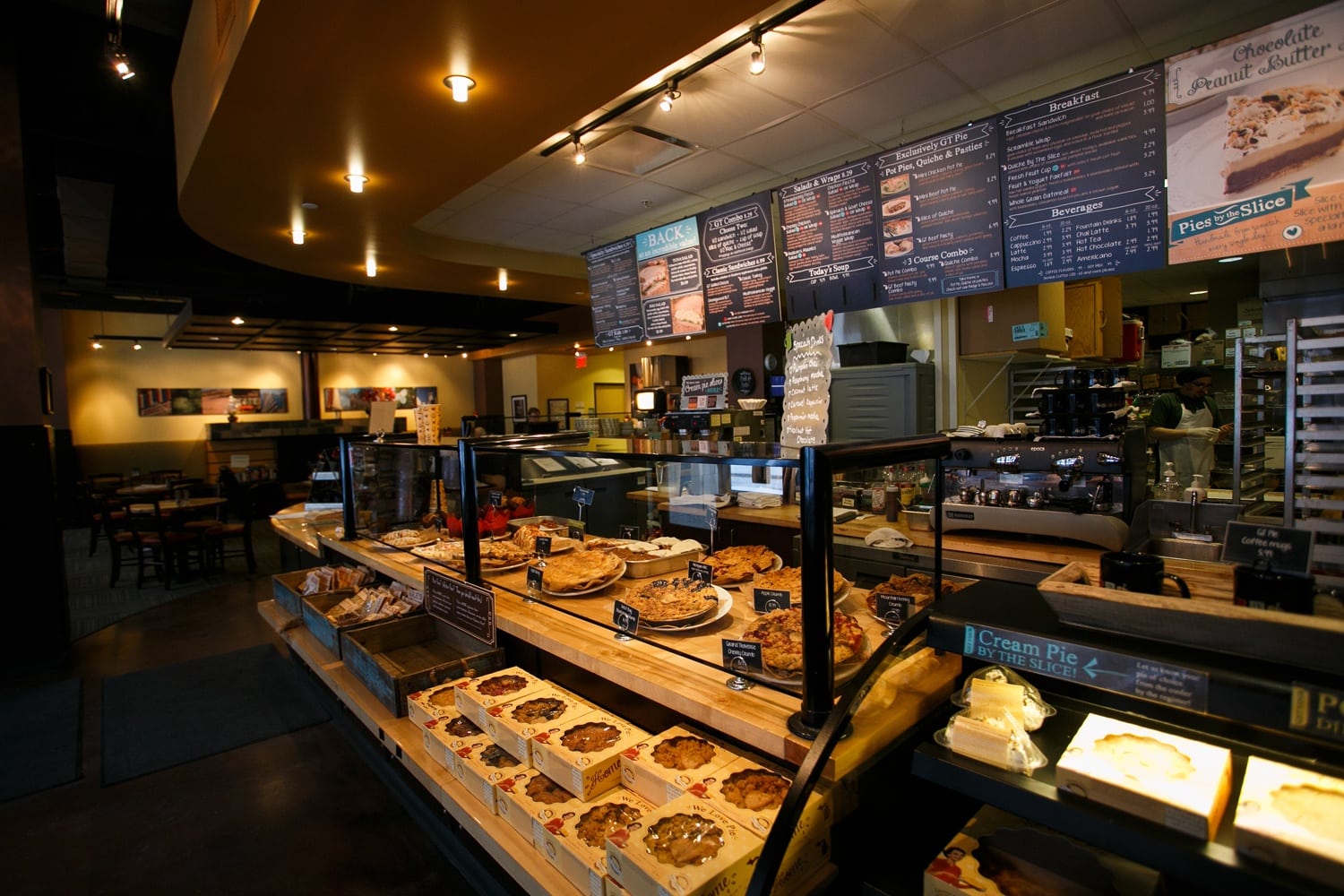 “It was the story of what was going on at the time,” Denise says. “It was a time of reflection. We were wondering whether we were going to ride this out, hang on, or should we do something on our own.

“There was also this tug of family, especially thinking about our kids,” she adds, noting their relatives were still in Michigan. The couple has two children, a son, Bobby, and a daughter, Kellee. 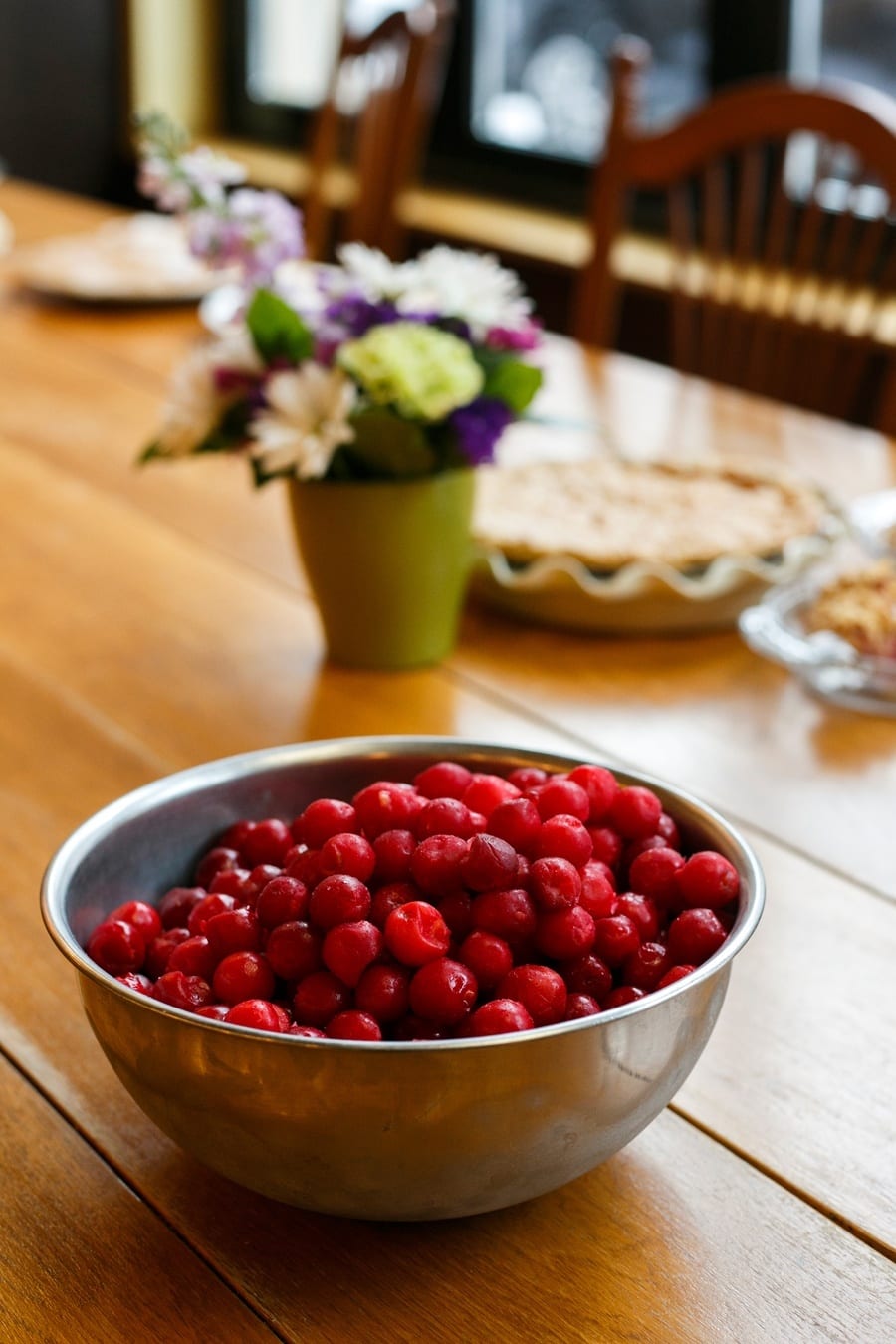 Inspiration came from over the mountains east of San Diego. On occasional day trips to Julian, an outdoors mecca, the Busleys became enamored of a small, family-run bakery. They were impressed by the operation run by owner Liz Smothers. The apples for the variations of apple pie were harvested from the family orchard. Crusts were made and rolled out and pies filled and baked in an open kitchen, in full view of customers.

“It was quaint but it was also a cool little business,” Mike says. “It gave us the seed. What would a pie company look like as a business plan? Can we own and operate our own business?”

After months of research, Mike developed a solid business plan. Liz Smothers agreed to give Mike and Denise a crash course in pie making, and the couple donned aprons and spent a week in Julian. “I wasn’t used to being on my feet all day,” Denise says. “Your back hurts, your feet hurt. You’re just tired. We worked 12 or more hours a day. We were there at 6, with a dozen other people, making 500 to 2,000 pies.” 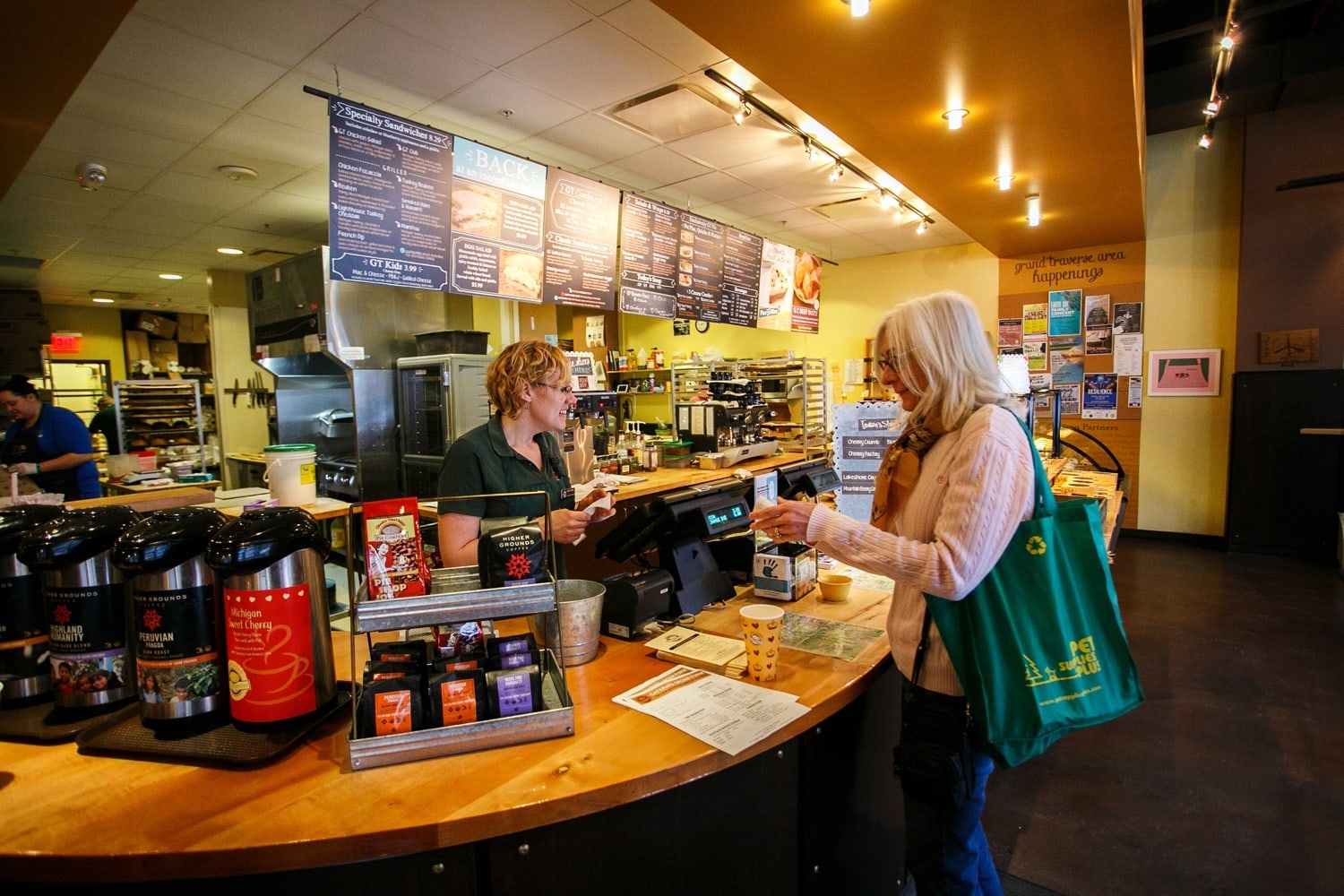 After scouting possible locations across the country for their yet-to-be-named pie company—outdoorsy, family-friendly cities like Boulder, Colorado, and Madison, Wisconsin—the Busleys settled on Traverse City.

It seemed the most logical choice: It was a small city with a solid infrastructure, a perfect blend of community, with airport access, medical and university facilities, plenty to do, and it was close to family. And there was the busy summer tourist season—and no pie company.

“It was the overall quality of life,” Mike says. 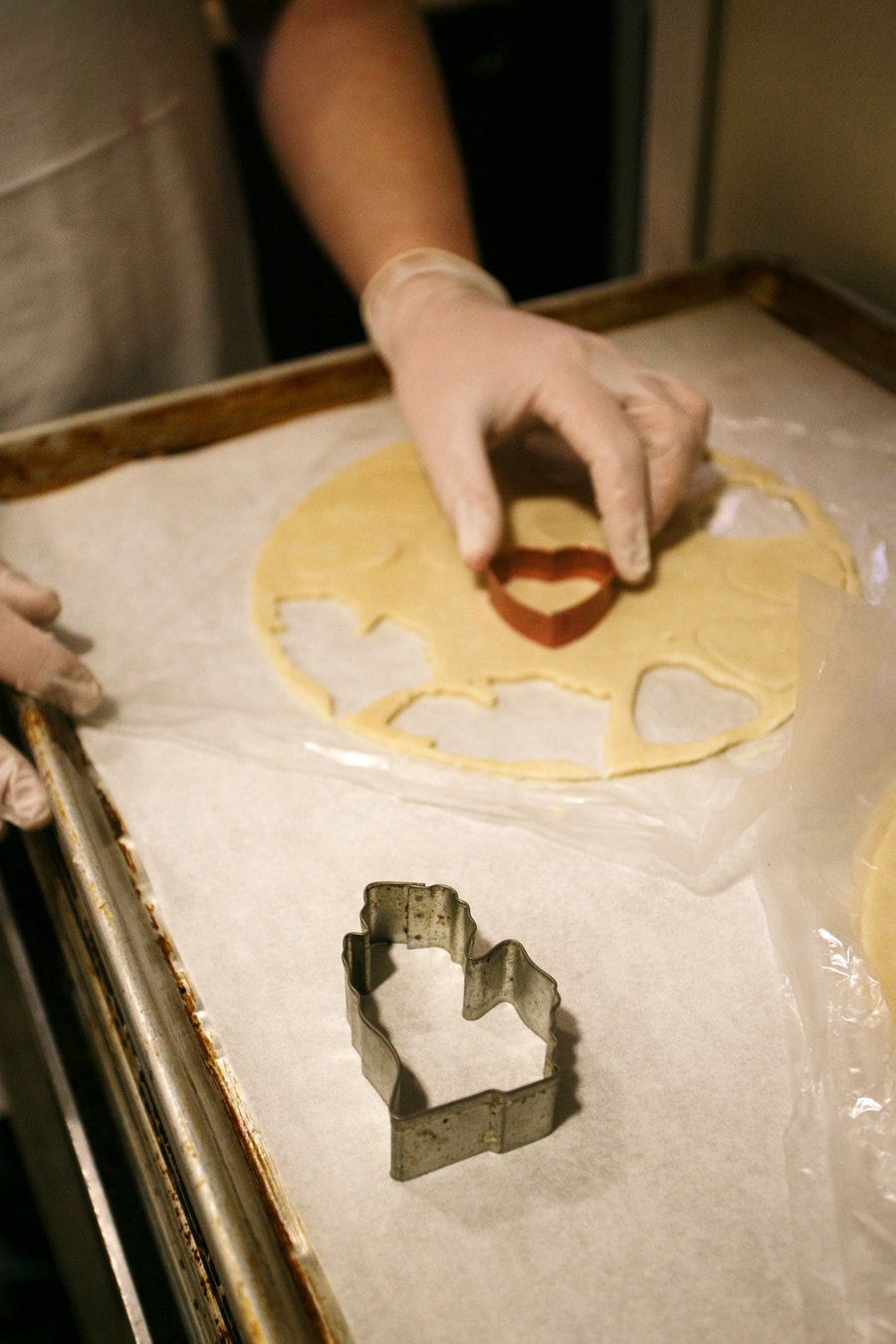 The Grand Traverse Pie Co. opened for business in July 1996, in a small rented storefront on West Front Street, with seating for just 12. With a half-dozen employees, the Busleys, with Liz Smothers on hand, baked 10 different fruit pies, muffins and cookies and poured coffee. By noon, the selection of 60 pies was sold out.

“We had to close and make more pies,” Denise recalls. “We were walking on water.”

The summer and holiday season proved brisk business. They were aided by publicity in local publications and their proximity to well-known foodie destinations; Burritt’s Fresh Market and a bakery were next door. Folgarelli’s was just down the street. “We didn’t know anybody in Traverse City,” Denise says. “It’s a good thing because we didn’t hear the chatter—what people were talking about. ‘What are these people doing? How are they going to make that work?’”

Then came winter. The first day they opened the shop in January, post-holiday, they sold … just five pies. “I thought, Oh, no. What have we done? How are we going to pay the bills? It was the longest day of my life.” Denise recalls.

With necessity being the mother of invention, the Busleys that winter began delivering pies to the Detroit area, motoring south by 3:30 a.m. in a van loaded with pies and stopping at about a dozen shops, including the former Hiller’s and Westborn markets and Rudy’s Market in Clarkston. Selling 50 pies a day would keep them in business, Mike figured.

“It kept our noses above the snow drifts that winter,” Denise says. 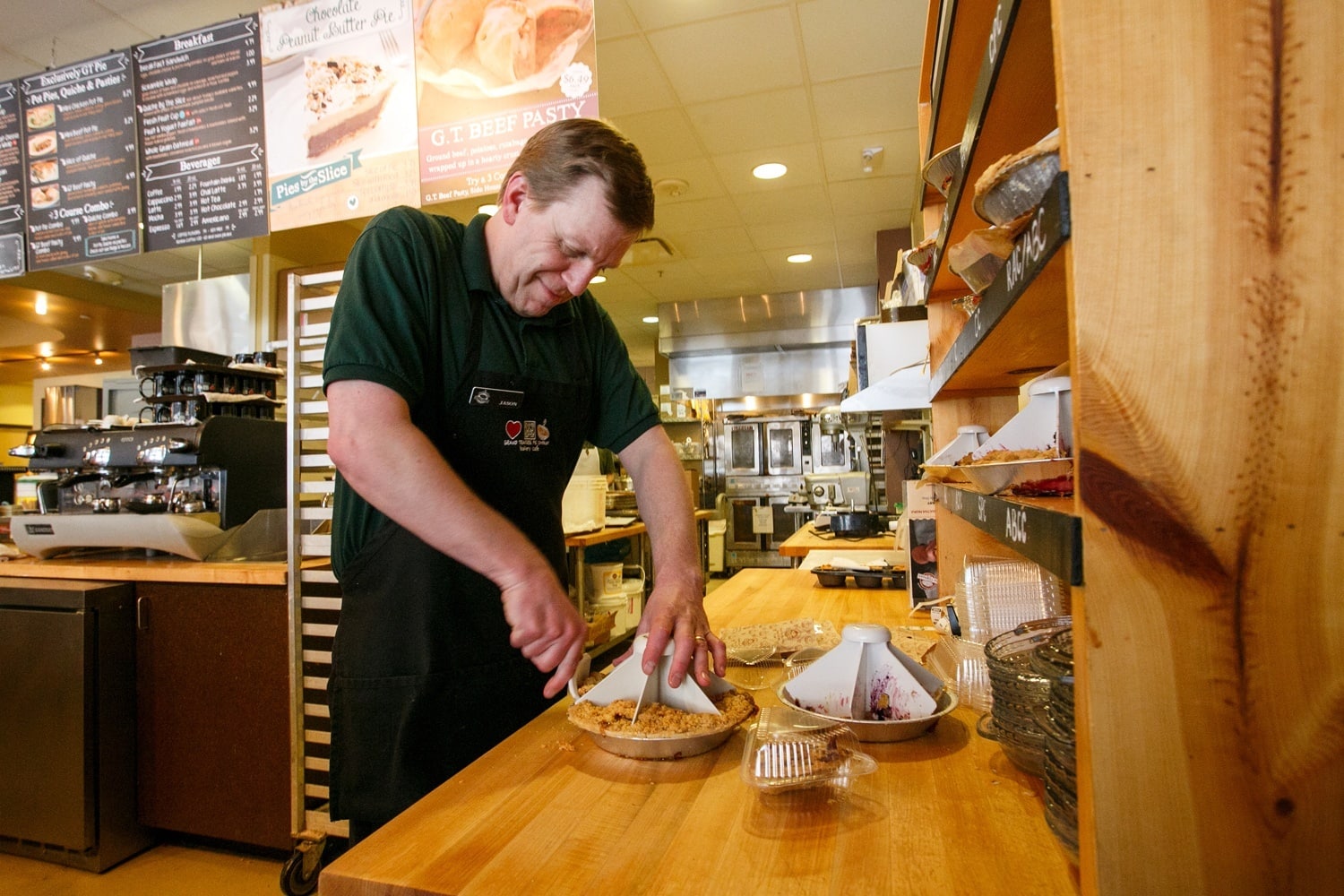 A few years later, with a recipe for success assured, the Grand Traverse Pie Co. began expanding. Shops opened in Brighton and Okemos. The first franchise opened in Indiana in 2003, but before the decade ended, the Busleys bowed out of franchising. Future shops will all be company-owned and -operated.

Further refining the business plan, the Grand Traverse Pie Co. expanded to include a cafe service. They tapped the expertise of Charlie Chamberlain, a restaurateur who was in the process of closing several eateries in the region. Chamberlain helped them create a winning menu of salads, sandwiches, pot pies and pasties.

They eventually bought the entire building that housed the West Front Street shop (there had been a Pizza Hut restaurant there once) and established company offices.

With the company’s growth, they also built a commissary to make and freeze crusts for delivery to the shops. As much as possible, all ingredients—apples, blueberries, cherries, flour, and sugar—are culled from Michigan farms and orchards, while the majority of other supplies come from Michigan-owned companies. Even the tables are made from local cherry wood in some of the shops. 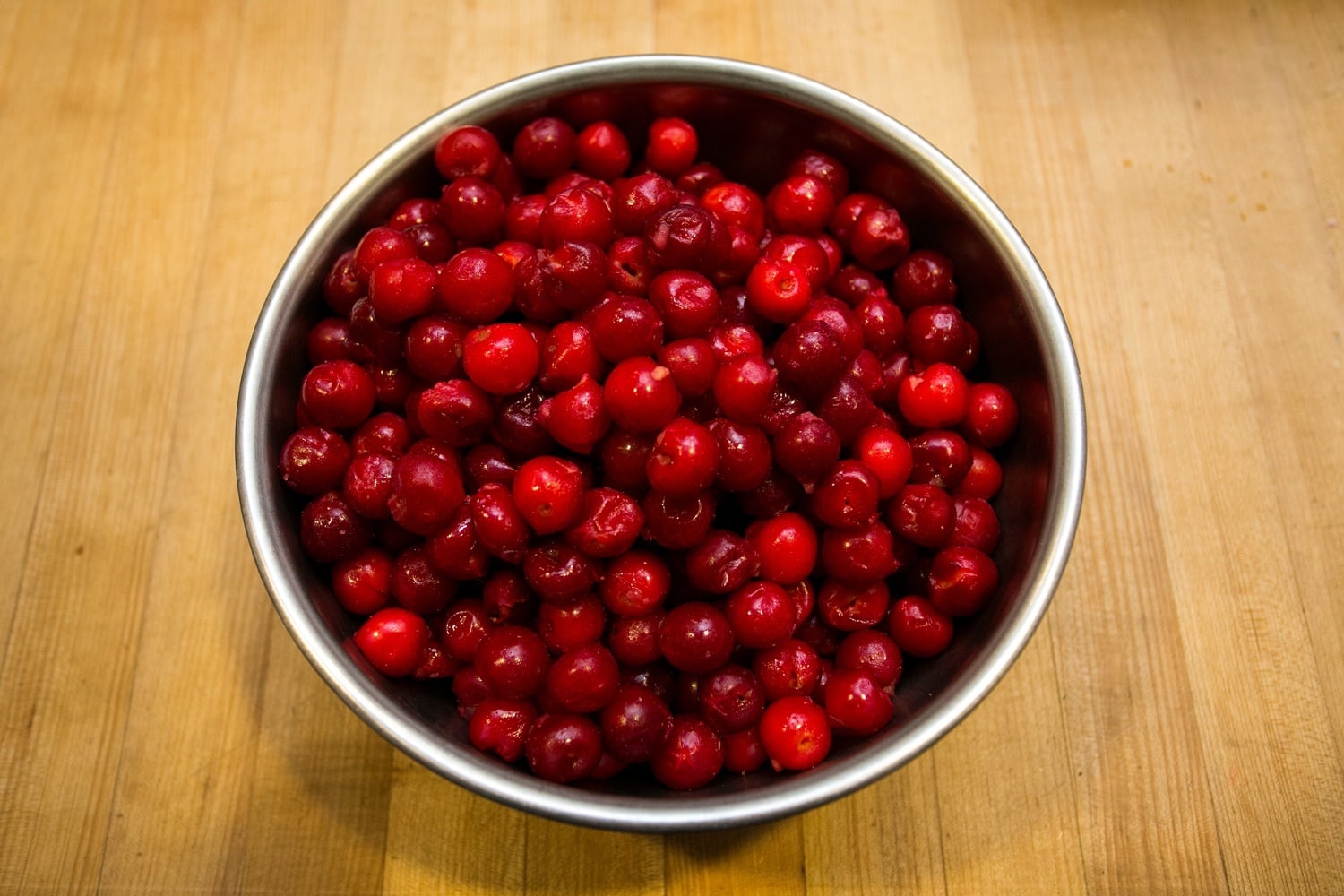 As the Grand Traverse Pie Co. has evolved, so has the company’s community consciousness. In 2011, the Busleys opened a shop on the east end of Front Street, downtown. That location is known as Grand Traverse Pie Community Shop. All profits from pie and food sales are donated to local community groups that focus on developing healthy futures for children and families of Michigan. 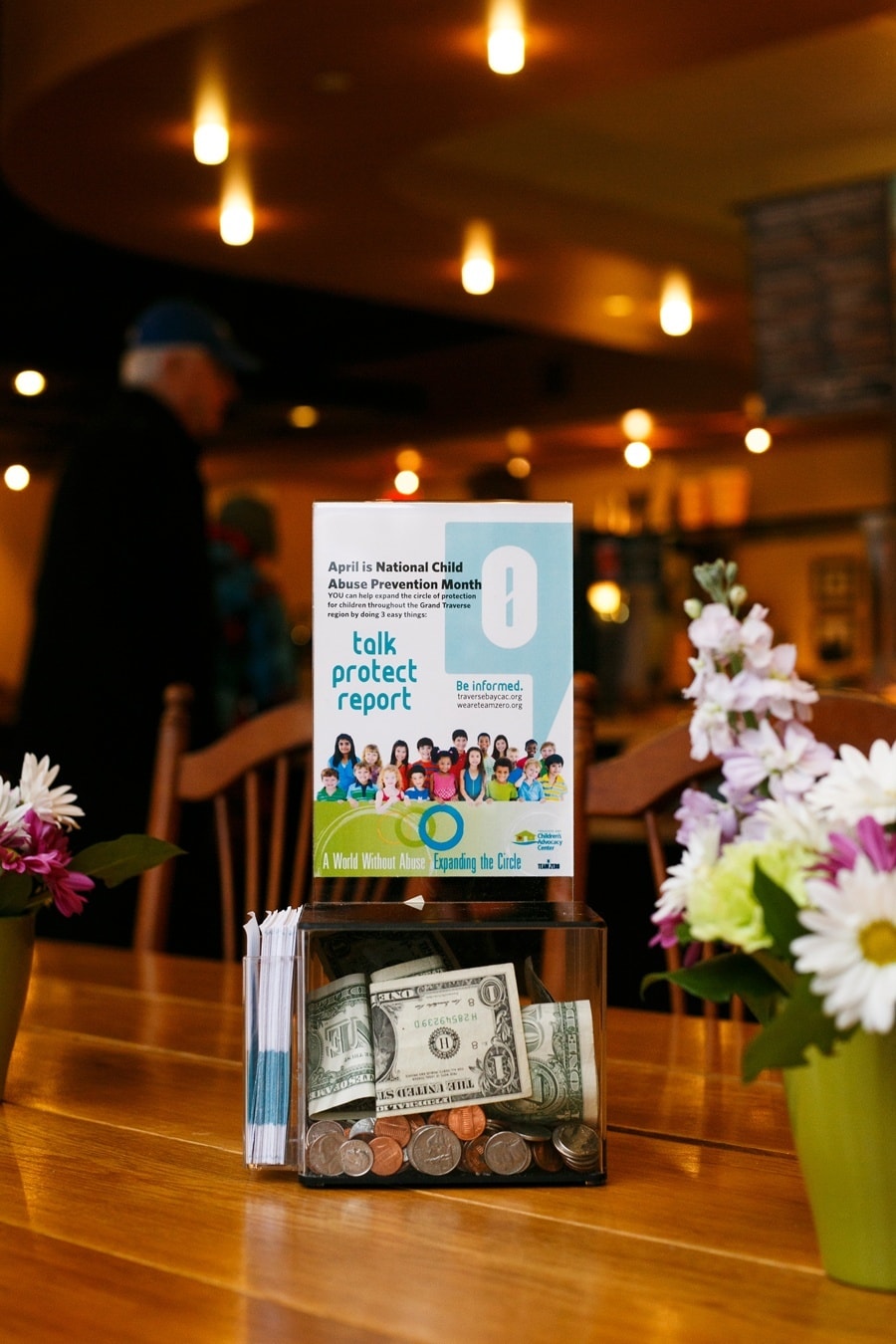 A few years later, they introduced “The Power of Pie,” donating a nickel from every slice of pie sold at company-owned shops to local community charities focused on children and families.

Today, the company sells about 500,000 pies a year, offering 40 different types, some only seasonally and developed in-house by a culinary team and often using Michigan-famous ingredients, such as Vernor’s Ginger Ale or locally brewed beer.

Mike continues to serve as president of the company, working with partner Tim Rice, who has a long history with Grand Traverse Pie Co. He was one of the company’s first wholesale customers and has decades of experience in food management. They’re being very careful about growth, eschewing any further franchises. The newest company shop opened in Rochester Hills in 2016.

Denise is happy to be the business connection to the community.

“If you think about pie,” says Denise, who has stepped away from day-to-day operations to focus on charitable community efforts, “in our culture, pie is something you gather around to share. You have a piece of pie and catch up. It brings family and friends together. It’s a glorious thing. Pie makes people happy and happy people make a better world.”

This story is featured in the June 2018 issue of Traverse, Northern Michigan’s Magazine. Get your copy!