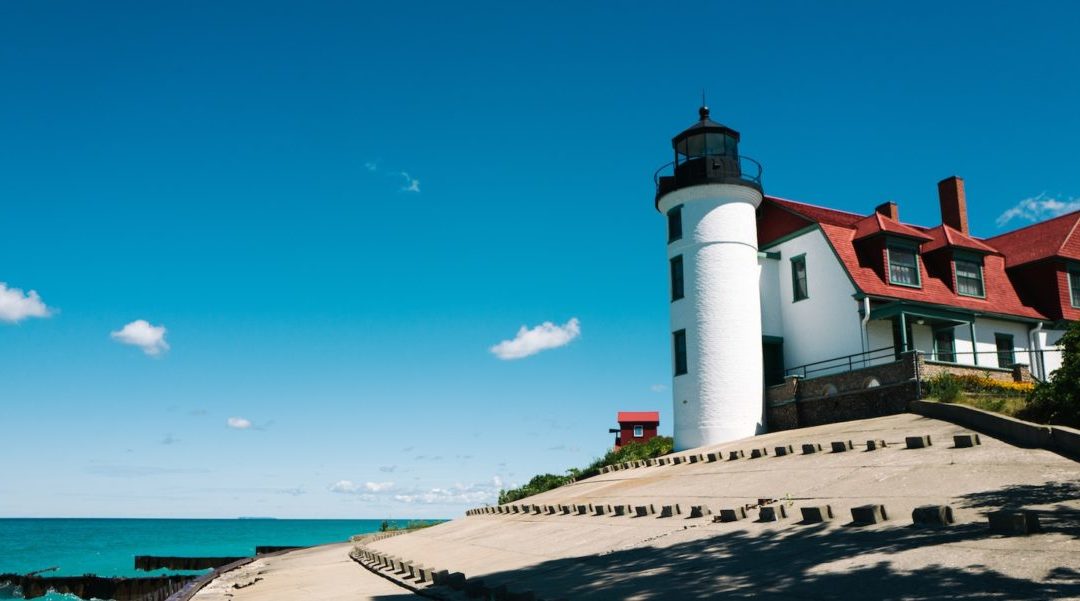 More than 10,000 voters from across the state weighed in on 101 things they love about Northern Michigan. Their votes determined 303 Red Hot Best winners and 700+ honorable mentions. Here you’ll find the best Northern Michigan lighthouses to visit on your next vacation.

First Place: Point Betsie Lighthouse, Frankfort
From morning’s clear light to the neon orb of sunset, this hipped-roofed queen of the Benzie County shoreline is a beacon of beauty. Bring your camera and a bathing suit—the beach is amazing. Open to tours; $5 for adults and $2 for children ages 6–11.

Enjoy aerial views of the Frankfort North Breakwater Lighthouse in this video!

Frankfort North Breakwater Lighthouse | Frankfort
Take a front-row seat on the Frankfort Pier (at the end of Main Street) for fabulous sunsets. The lighthouse, built in 1932 at the pier’s end, ups the ambiance factor.

Grand Island East Channel Lighthouse | Munising
This lighthouse located north of Munising was constructed of wood when it first opened in 1868. Created to lead boats from Grand Island to the harbor, this lighthouse can easily be seen from many of the Pictured Rocks tours also leaving from Munishing bay. It’s especially a gorgeous view in Fall.

North Manitou Shoal Lighthouse | Lake Michigan
Just a short trip from Fishtown in Leland, you can head over to explore the North Manitou Island Shoal Light. Locally known as The Crib, this lighthouse was the final manned offshore light in the Great Lakes until 1980 when it was automated.

Old Mackinac Point Lighthouse | Mackinaw City
This lighthouse marks the meeting point of Lake Michigan and Lake Huron. It was founded in 1889 and was in operation up until 1957, helping guide ships through the Straits of Mackinac.