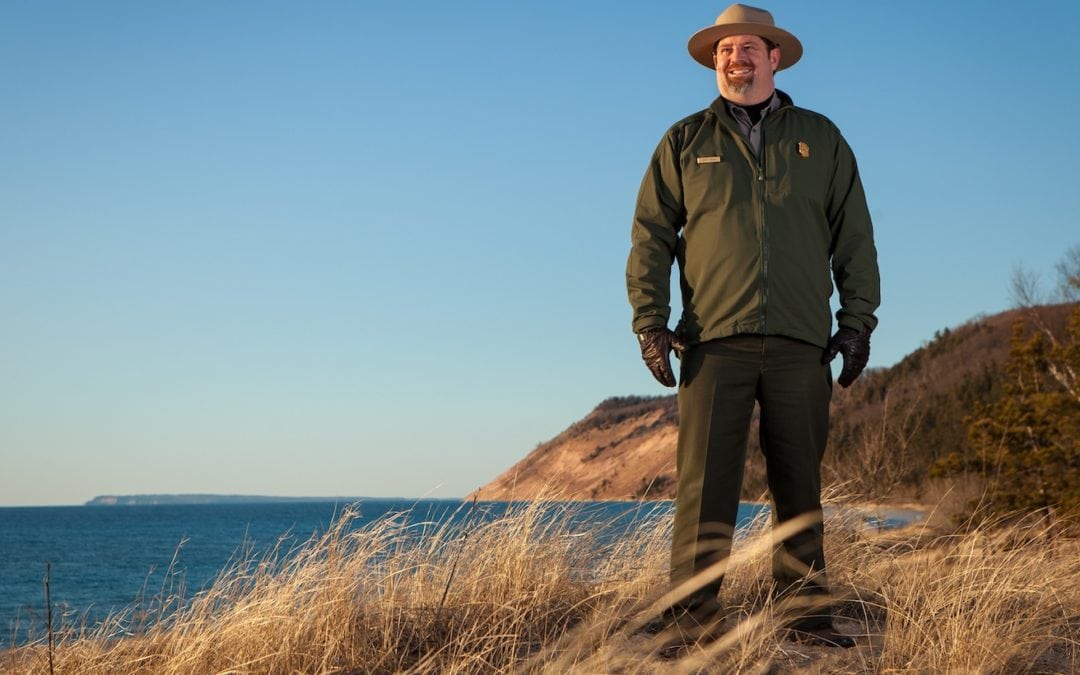 Scott Tucker, who signed on as superintendent of Sleeping Bear Dunes National Lakeshore two years ago, has spent 22 years of his 22-year career in the National Park Service. He helped oversee the grounds of the White House and D.C. monuments for 15 years, trekked some of the Lewis and Clark Trail, staffed the Klondike Gold Rush Park in Alaska, and he’s visited 200 National Parks. Point is, the man knows a good park when he sees one. We checked in with him to see what he’s liking most about his new turf.

What floats to the top when you think about your favorite things in Sleeping Bear?

My background was mostly historical parks, so one of the things that drew me to Sleeping Bear was the cultural history portion. The piece that catches me is the human story on the landscape. The maritime history. The Port Oneida Historical District. And the amazing Native American cultural history that goes back hundreds and hundreds of years.

When your NPS ranger friends from other National Parks visit … people who don’t really know of Sleeping Bear … what’s their take?

Really, this park blows their minds. We take them up Empire Bluff, do the Pierce Stocking Scenic Drive overlook. They are as amazed by the vista over Lake Michigan as they are when they look over the rim of the Grand Canyon. They just have no idea that this could have existed in Michigan. Even people in Michigan have that reaction.

Any specific projects in the pipeline that we can get excited about?

Let’s see. We are doing construction on the Kettles trail system this summer. That’s a discontinuous piece southeast of Big Glen Lake named after kettle formations. And we will begin designing the final leg of the Sleeping Bear Heritage Trail. But we still have to fundraise for that, so construction would be two years off. We will add more ADA- [Americans with Disabilities Act] accessible campsites to Platte River Campground. And we will be doing a restoration project at Platte River mouth that will guarantee the river’s natural dynamics will return there.

Is Sleeping Bear getting too crowded?

We had 1.7 million visitors in 2016, but that was the NPS centennial. We were a few thousand below that in 2017. Hard to say if it will continue to go up. But either way, we need to know how to handle that. People are here wanting that postcard moment. How do we ensure they get that experience and keep it the rest of their lives. Yes, there are crowds, but people tend to cluster in certain places and at certain times—the popular vacation weekends of summer. But I sat with my family on a beach on 4th of July last year and we had a mile to ourselves in both directions. Here, you can have solitude, and you can enjoy people-watching at the Dune Climb.