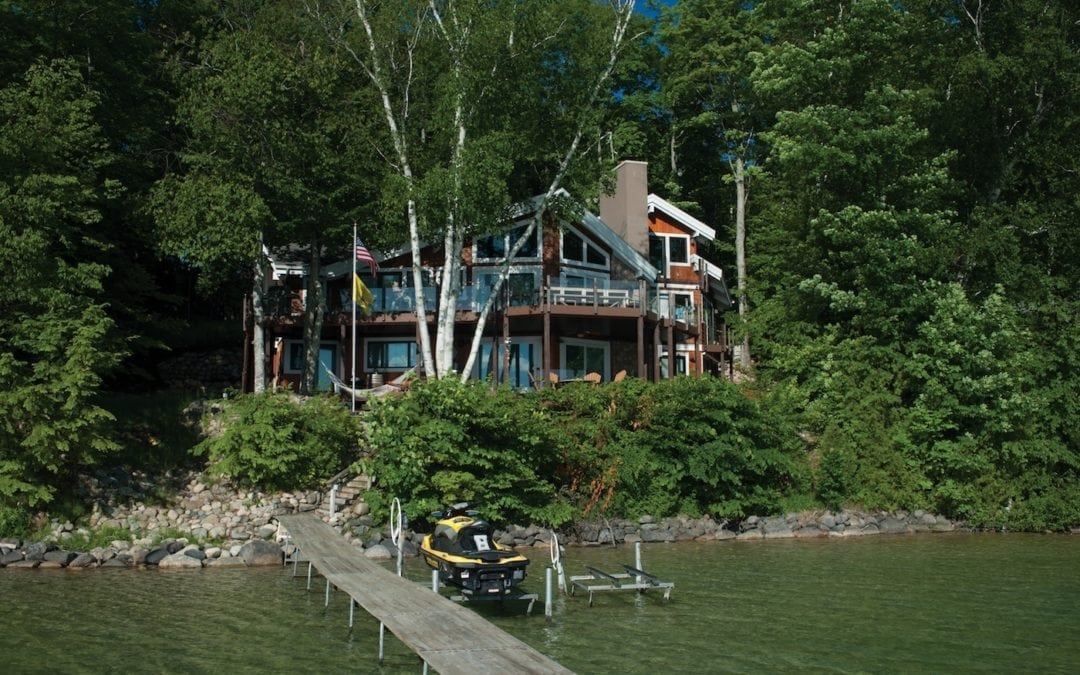 This Torch Lake Home reflects a family’s love for the lake and for each other.

This home is featured in the April 2018 issue of Northern Home & Cottage, a bi-monthly home publication included in all subscriptions to Traverse, Northern Michigan’s Magazine. Subscribe! 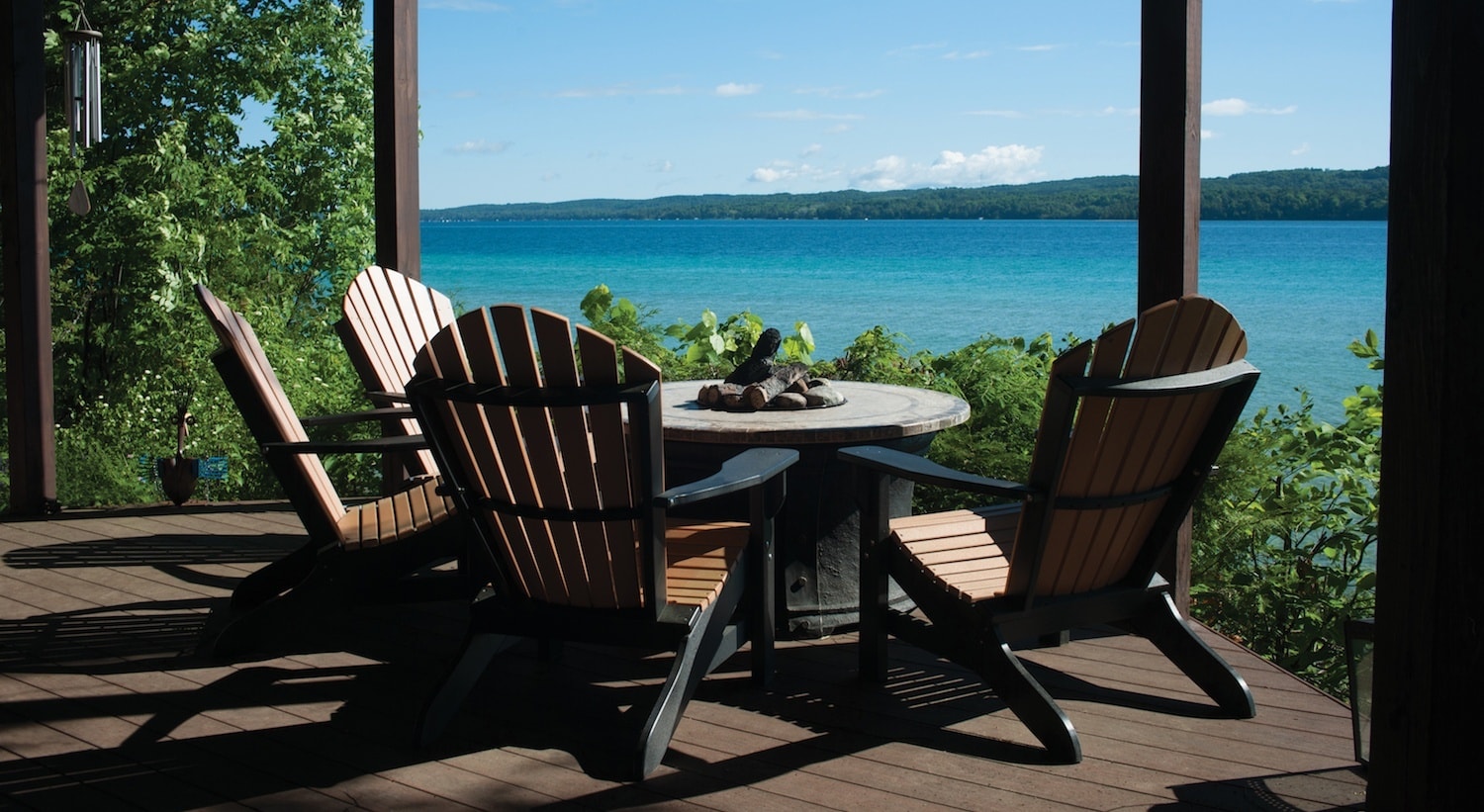 In 1998, a young couple with three children and another on the way purchased a 1970s-era cottage on Torch Lake. The cottage was pretty basic then—a “cottage in the woods,” as one of the now-adult sons remembers it. The place was cozy and a little dark on the inside and had forest all around, and the family soaked up every moment they had together there. 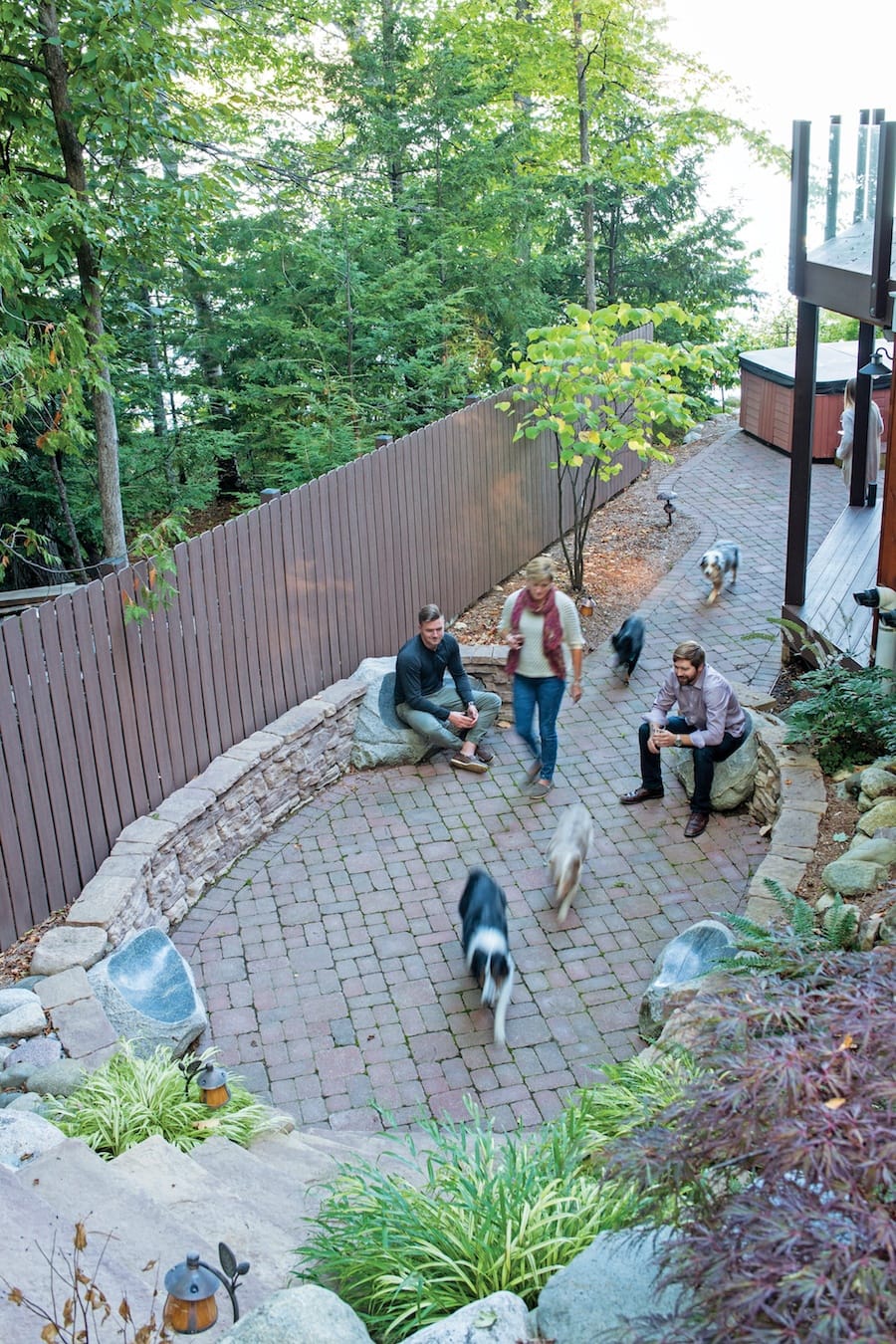 About five years ago, with the kids just about grown, the parents decided it was time to renovate—and make more room for a family that was sure to expand in the coming years.

The new plans included a top-to-bottom, inside-out renovation. The only parts of the original home saved were two bathrooms and a bunkroom. “The homeowners and I worked together for well over a year before construction,” recalls Chery Dubay of Indesign, a design and build firm in Charlevoix. “Their vision was to have it be the perfect place for their growing and aging family to spend as much time together as possible.”

The final design replaced the cramped kitchen (that had doubled as a pass-through from the front to back doors!) with a lovely new one and added three bedrooms and baths and a new master bedroom suite. The pièce de résistance is a tower outfitted with huge windows that take in the spectacular view of Torch Lake. 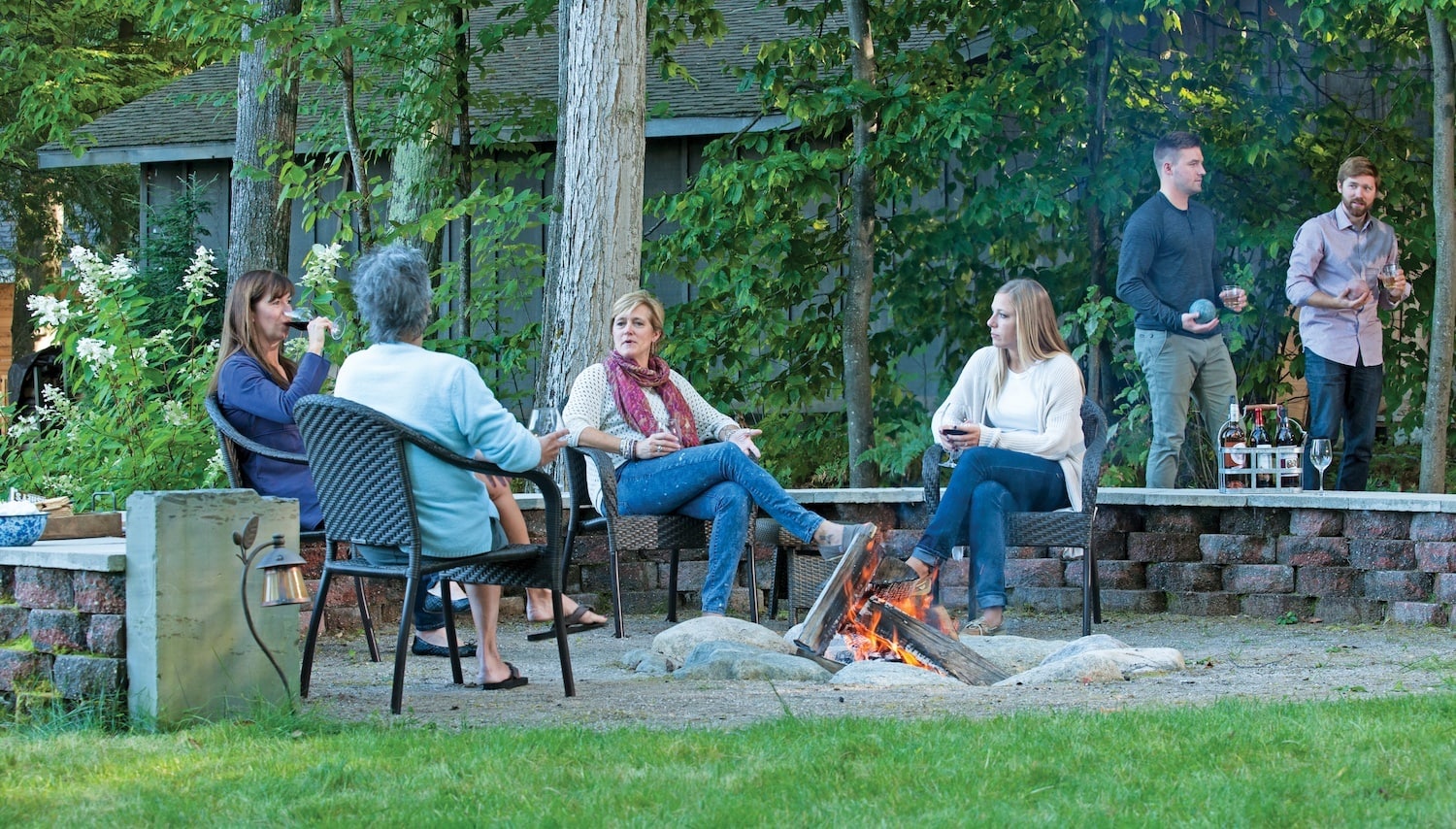 The site, which begins with a steep driveway to the home, and then drops 25 feet to the beach, was one of the most challenging any of the contractors had ever worked on. It meant that the landscaper, Erick Takayama of Grand Traverse Organic Landscapes, needed to be involved from the get-go, figuring out where and how to stage his hardscape materials—given once the construction started he had no access by truck to the waterside of the home.

Needless to say, creativity didn’t get lost in complications. As with the home’s interior, the homeowners were also very involved in the landscape design, and the desire to make a cottage for family gathering is manifest in three well-thought out zones: A fire-pit table on the deck that faces the water; a bocce court adjacent to a fire pit set within a low semi-circle brick wall on the street side of the home, and an area referred to as “the grotto” on the shaded north side of the home that features a patio with a trickling waterfall and carved boulder chairs, fabricated by Wicksall Masonry. 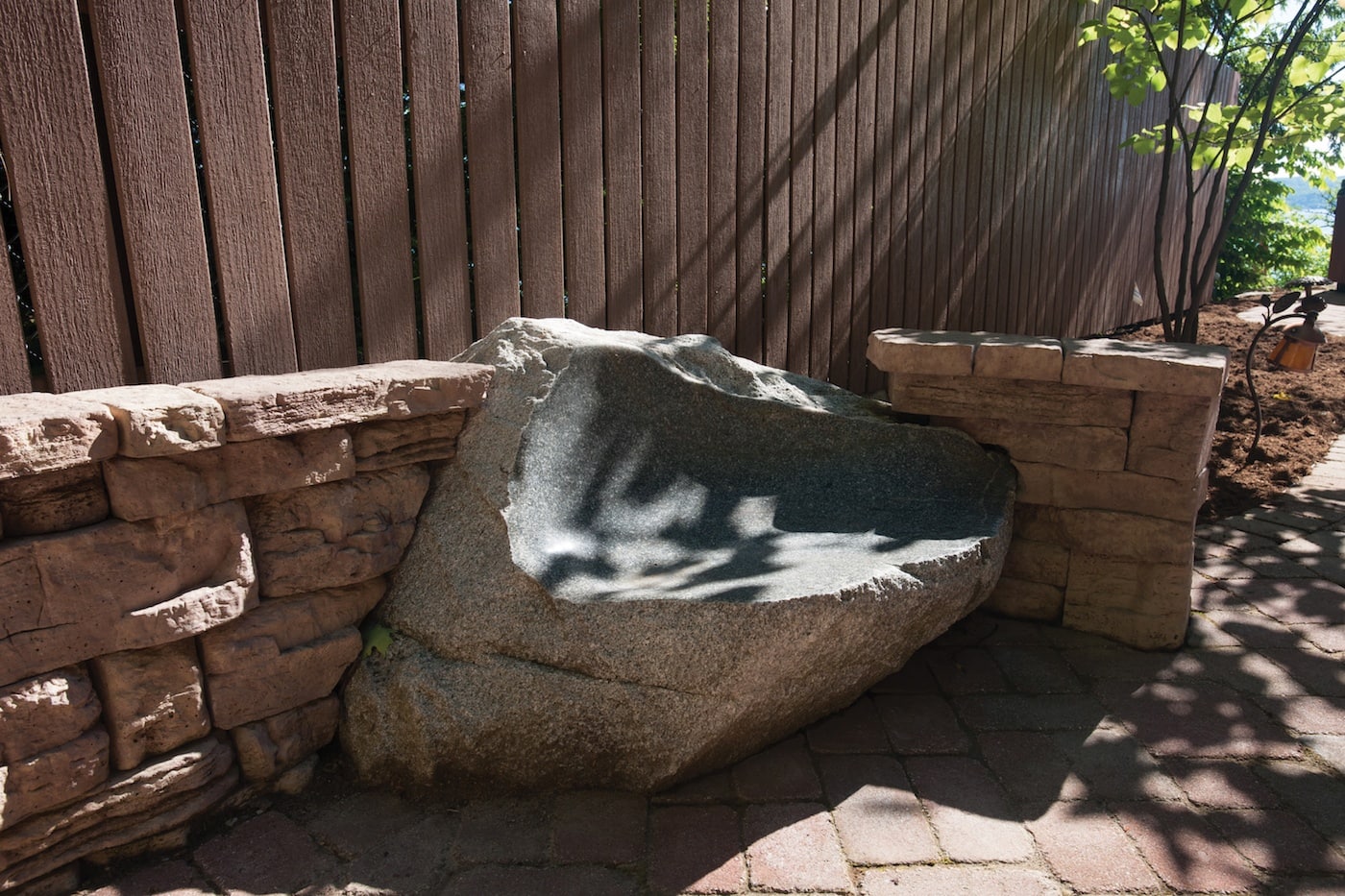 The grotto, says Erick, was inspired by the homeowners’ determination to put the 15-foot strip of property between the home and the property line to creative use. The homeowners are wine aficionados and Erick thought it would be the perfect spot to enjoy a cool glass of wine on a hot day.

This coming summer, the homeowners’ dream of a place for their growing family will come to fruition. One of their sons will marry his fiancée in the Torch Lake area. The pre-wedding festivities will include boating, bocce rivalries and s’mores around the fire pits at the cottage. All the things the family has always done together, on this first page of a new chapter of their life on Torch Lake. 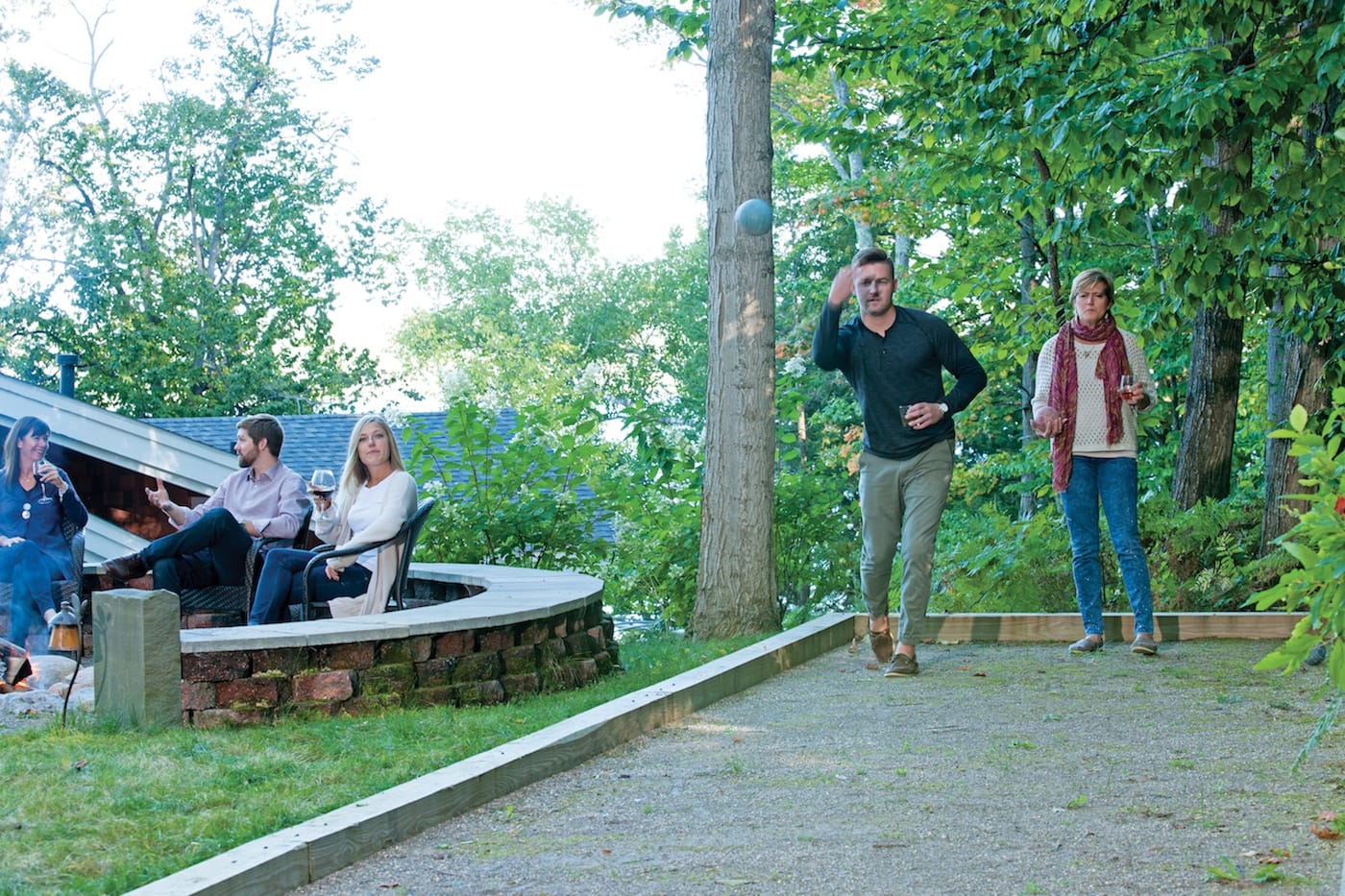 Gather friends and family for bocce (or pétanque, as they call it in France), a game that pairs nicely with Northern Michigan’s wine and hops country.

To Get Started You’ll Need …

A court. If you don’t have the real thing, the flattest place in your yard or beach will work, marked out with foul lines. The pros play on a 13-by-91-foot court. But you can have plenty of fun on a court that is not as wide and is half as long.

A bocce set. Eight balls that are four different colors and a smaller target ball called a pallina or jack. You can find sets for under $20 to over $100.

Two teams. Teams can be one, two or four players.

A coin toss. To determine which team tosses out the pallina.

The drinks. A couple of chilled bottles of local rosé and white wines. Icy growlers of local microbrew will do, too. 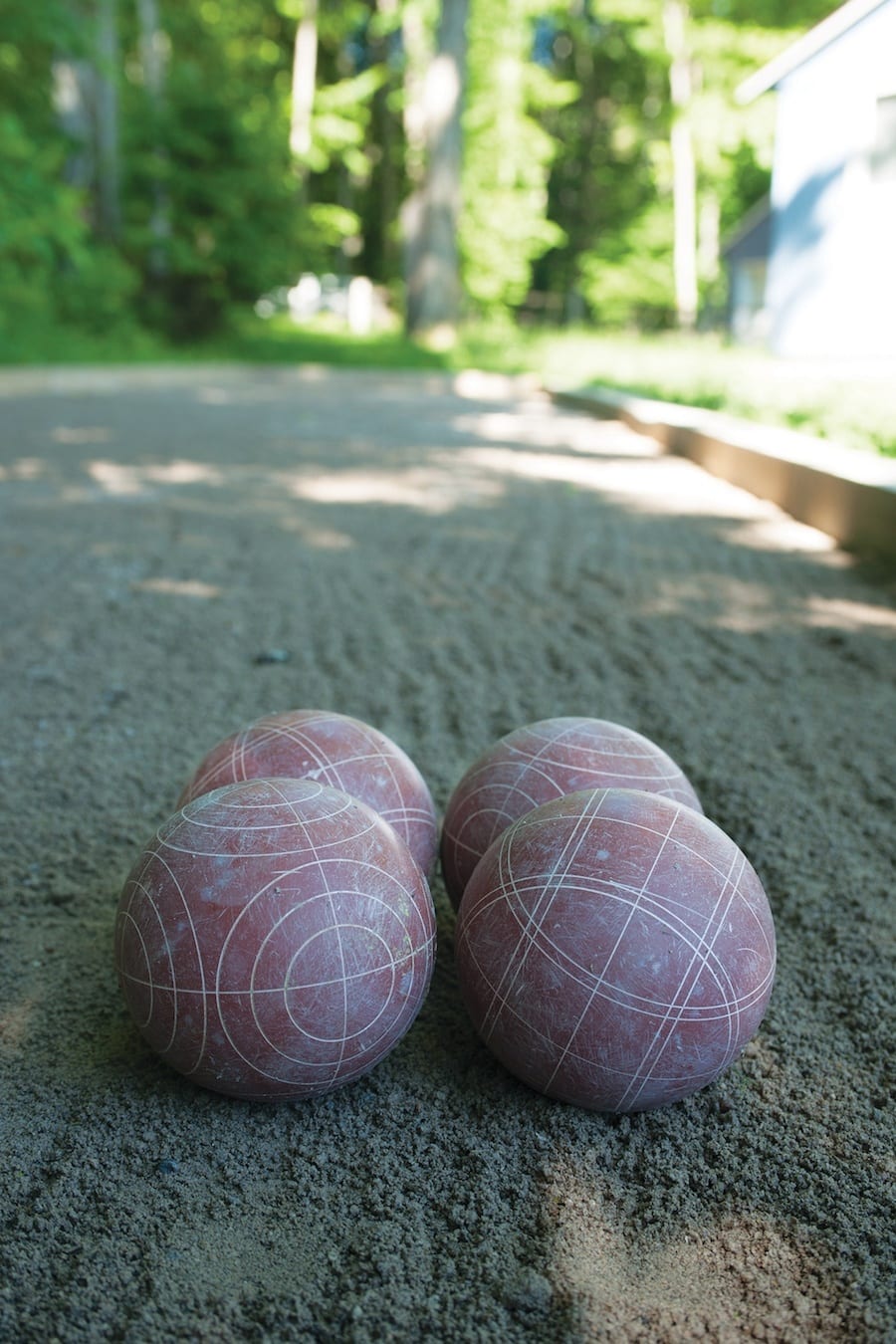 To get your team balls as close to the pallina as possible.

Scoring is done each time all the balls have been thrown. Only the team with the ball closest to the pallina is able to score a point or points—one point for each ball that is closer to the pallina than is an opposing team’s ball.