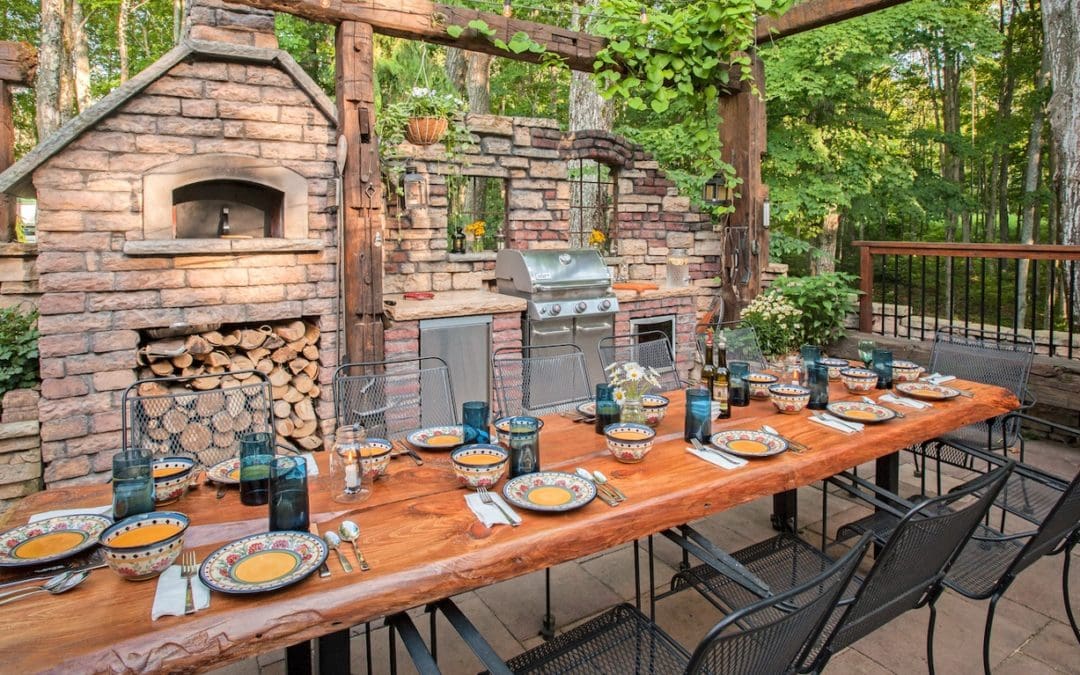 Touring the old stone courtyards of Italy inspired a Northern Michigan couple to re-create that sense of earthy, outdoor living at their own home. The resulting backyard makeover is beautiful!

This home is featured in the April 2018 issue of Northern Home & Cottage. 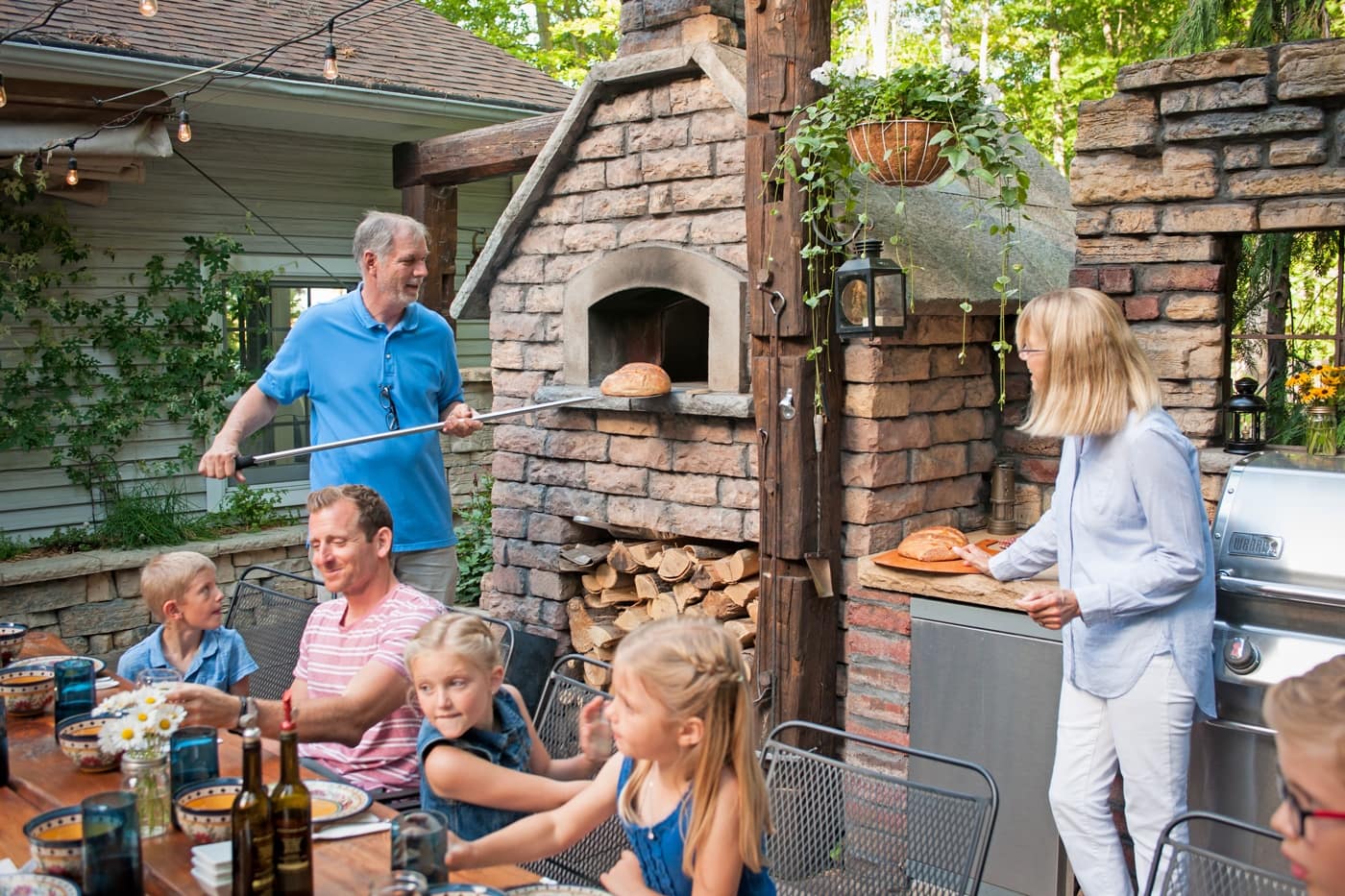 Most travelers come home from Europe inspired to add the flavors and styles of the Old World into their lives. That’s what happened, in a big way, to Jim and Marlys Manthei after a visit to Northern Italy in 2010, during which they toured 11th-century monasteries and medieval town centers. The couple was particularly struck by Italy’s stone structures—not surprising, since the two are partners in Rosetta Hardscapes, a Charlevoix-based manufactured-stone and landscape company. “We love the Old World aesthetic and the look of an old Italian courtyard where you eat outdoors surrounded by ancient walls,” Jim says.

Once back in the states, the couple decided to re-create the lifestyle in Northern Michigan with a Euro-rustic style outdoor kitchen—outfitted with state-of-the-art convenience. Working with Chad Cassio of Lakefront Landscapes, Jim designed a 30-by-30-foot space nestled into a mature stand of maple trees behind the house. He added a fireplace, bread/pizza oven, sink, refrigerator, countertops and enough space to host business meetings and family dinners. 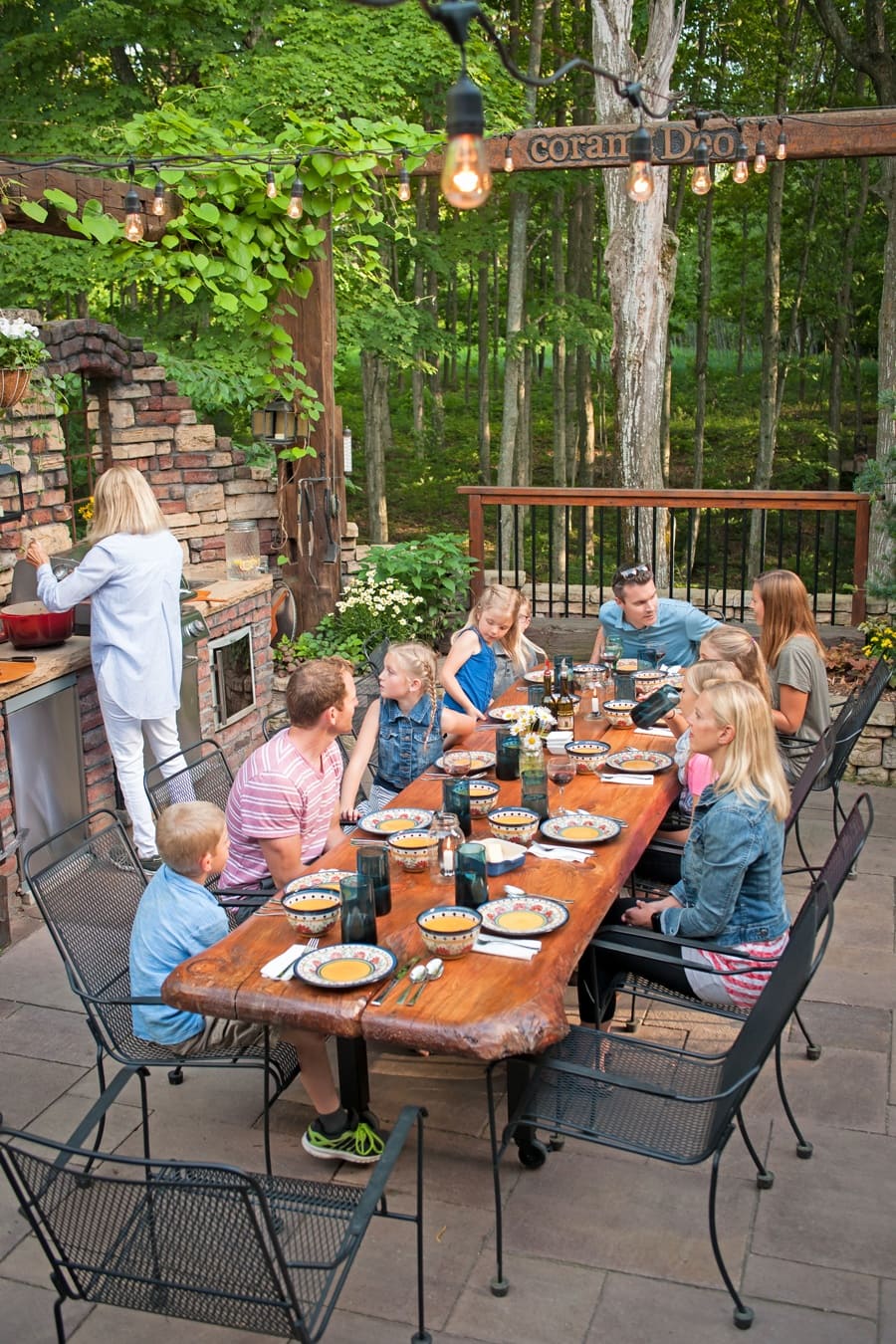 In the process, Manthei spotlighted Rosetta Stone’s diverse design possibilities, particularly a line of stone known as Belvedere that was developed after studying stone in the English Cotswolds region.

“Each manufactured rock has the look of a natural stone finish on four sides as well as on the top,” Jim says. “This makes it very easy to build a finished wall that looks good on both sides by just stacking the stones on top of each other.” In the lower walls, the crew glued the stone together, which is the most common way the product is installed. With the taller portions of the walls they used a black dyed mortar to duplicate the walls in Northern Italy. Nothing was designed to be “too perfect.” The goal was to embrace the Old World’s ambiance and irregularity. “I don’t know if Chad even had a level,” Jim says.

“Giving the project an aged look was one of the primary goals,” agrees Cassio. To achieve that, the team went with a mixed-media approach by using clay, brick and black mortar to create high contrasts in texture and color. Old barn beams from the Mantheis’ property were used to hang string lights and also to serve as the base for a retractable, weatherproof cover. Other notable details include the Rumford-style fireplace that throws out powerful heat, and a roomy 10-seat table that Jim built. Both enabled the family to enjoy a very special Thanksgiving dinner out on the patio during a particularly warm November. 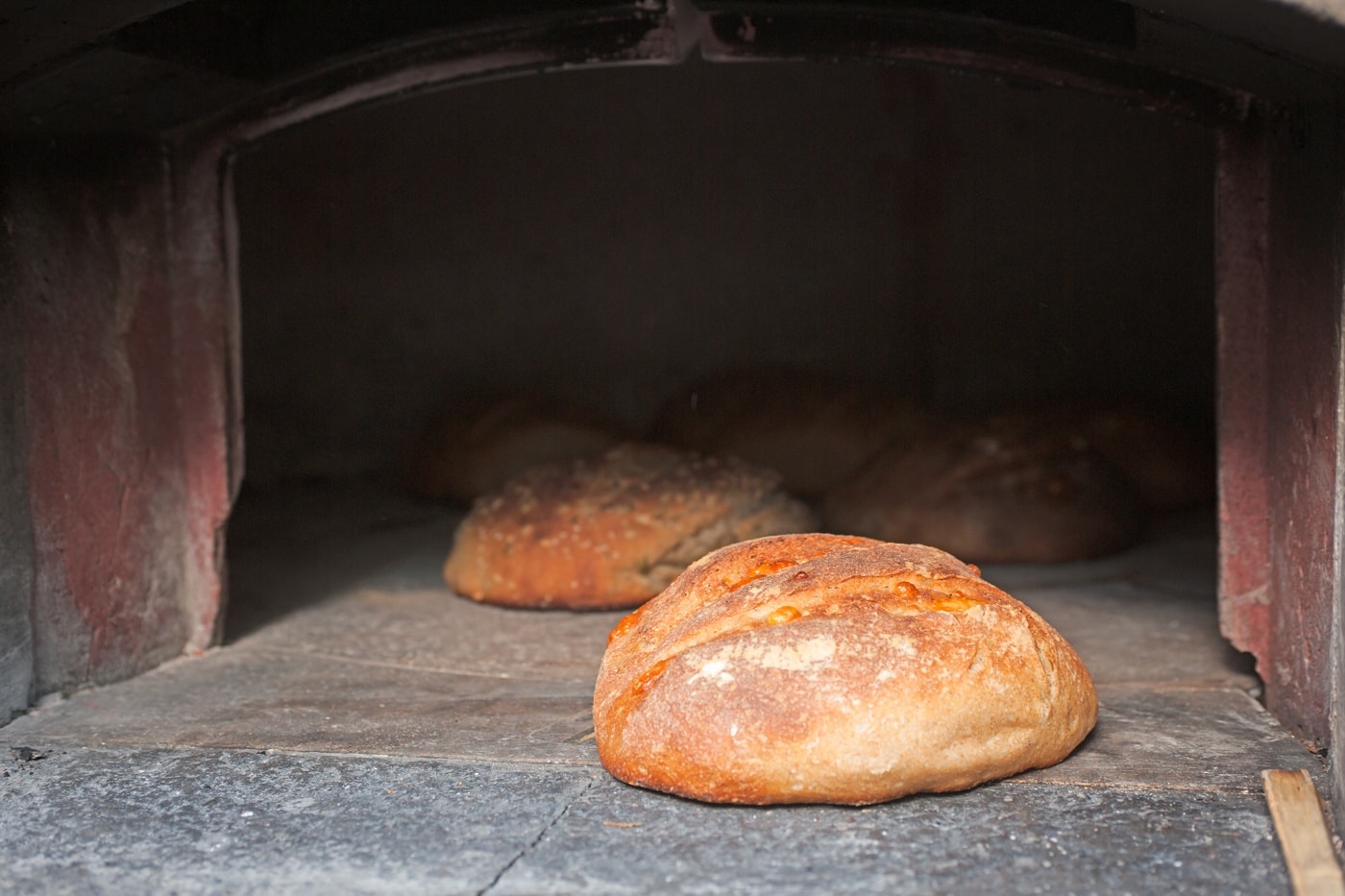 The oven has an Italian clay dome and can reach temperatures of 850 degrees and above. Marlys and Jim use the oven to make all of their household bread, even in winter. “We bake 12 loaves at a time, baking every few weeks,” Jim says. Pizza is another favorite. “Anything you can do with a regular oven you can do in this oven.”

The couple uses the new outdoor space year round, hosting family get-togethers for their children and nine grandchildren. They’ve squeezed as many as 60 people into the space, utilizing the lower walls as extra seating and setting up extra tables when needed. “As long as it’s not covered in snow and ice we are out here—on cooler days we just move the table closer to the fire,” Jim says. And while they enjoy the deck any time of day, they admit to a soft spot for evening events. “It’s magical at night.” 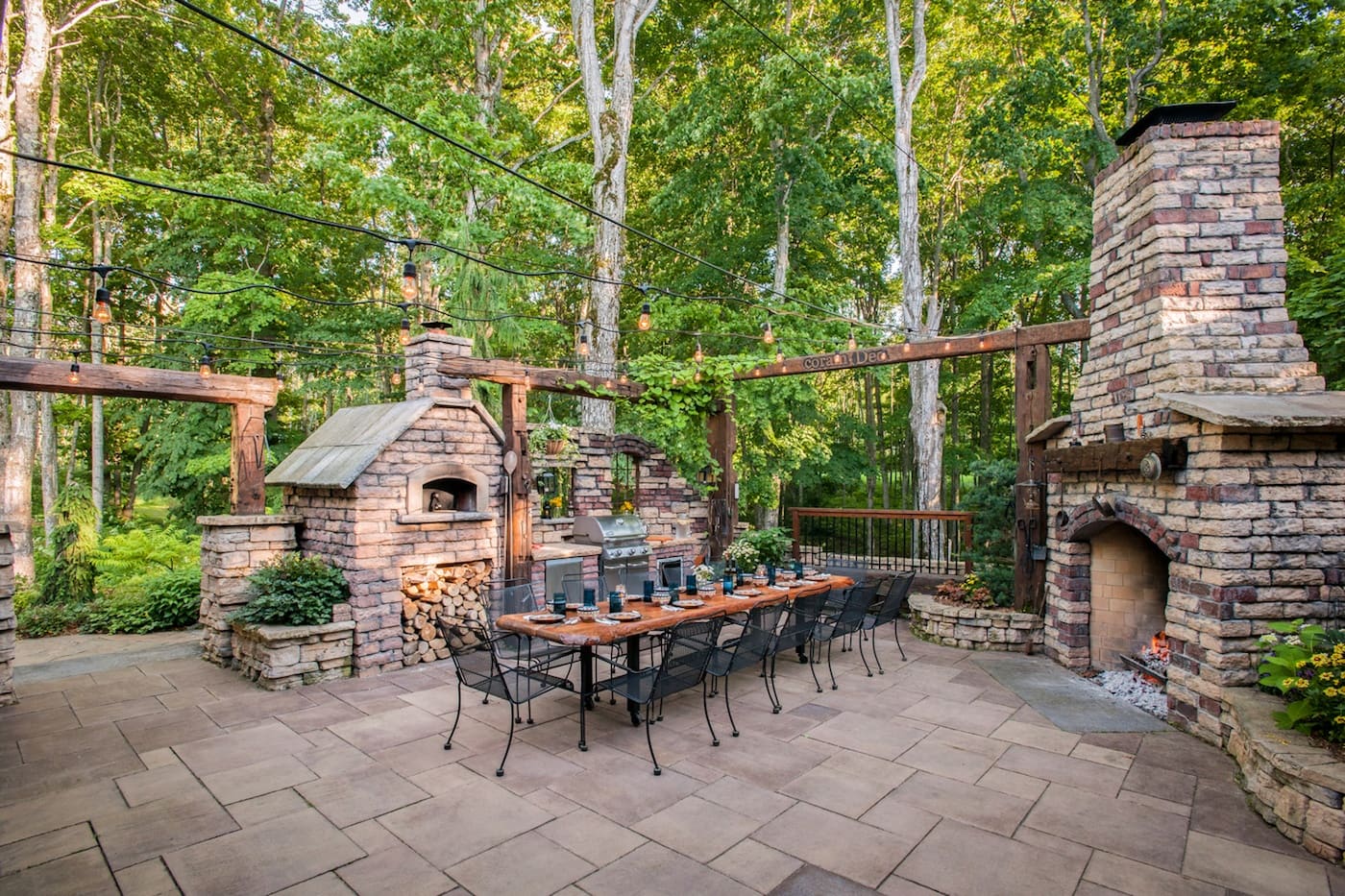 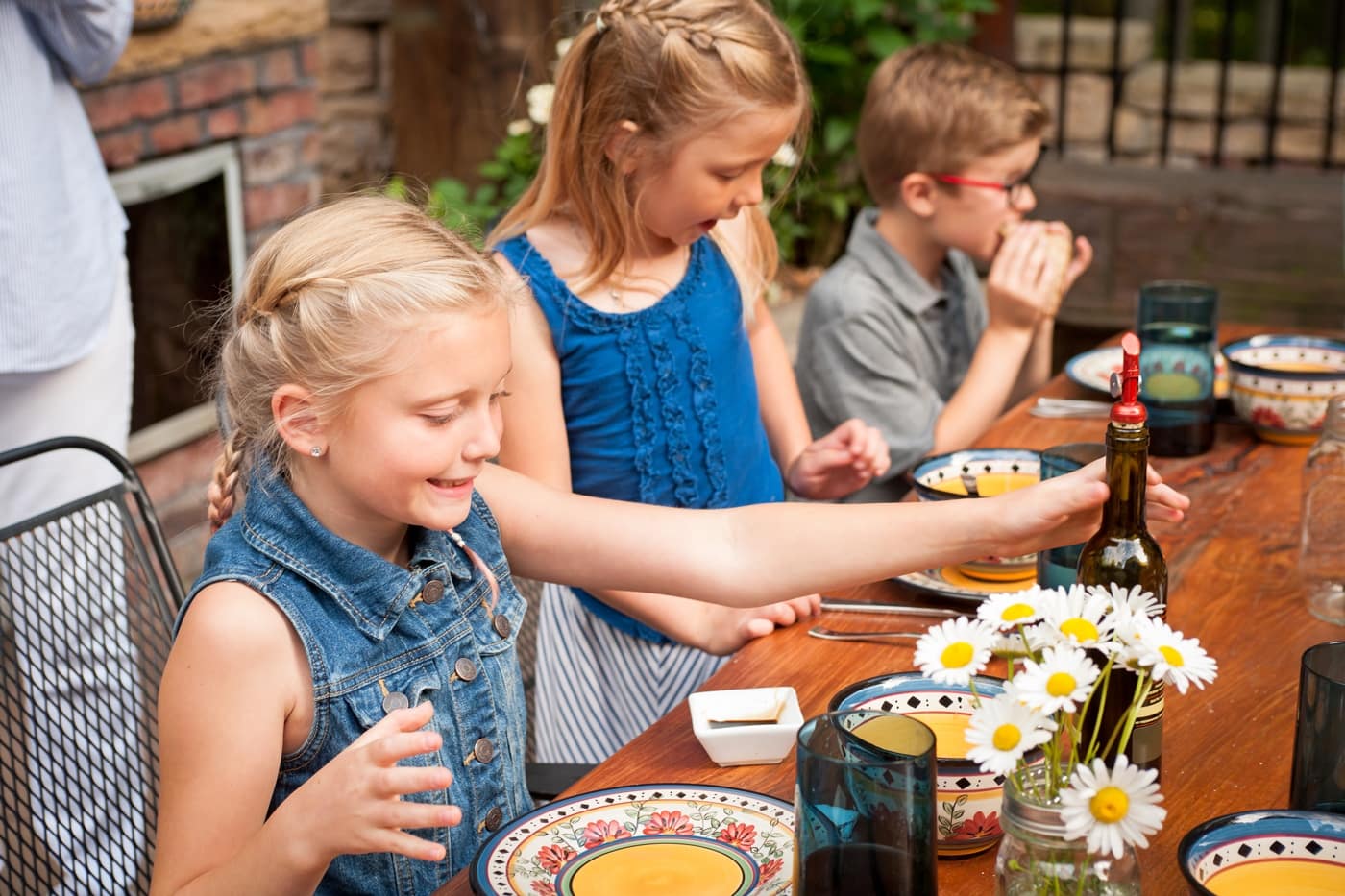