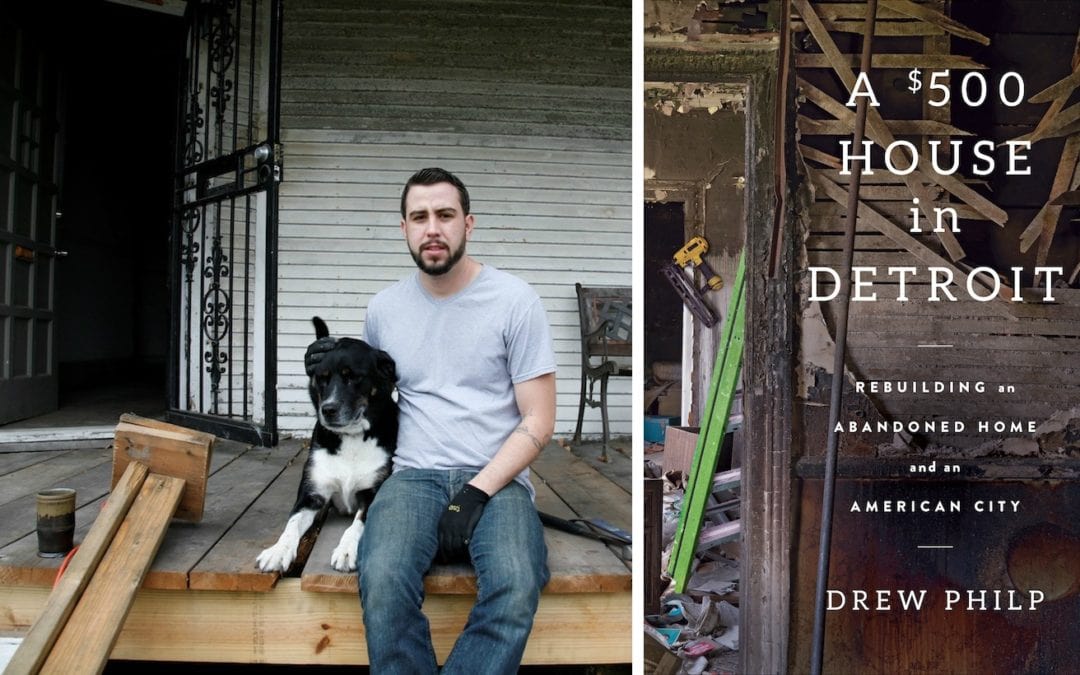 Barely out of college and at the dawn of the Great Recession, Drew Philp did the opposite of what nearly every other grad at his alma mater, University of Michigan, was doing, and different from what virtually everybody else in the entire Motor City region was doing—he moved straight into the heart of the crumbling city of Detroit. What he found was a surprising resilience and unexpected community in a neighborhood that had become a farm in the midst of empty home lots, reclaiming land that had returned to wild. He found more community in neighborhoods nearby.

Equally important, he found an abandoned Queen Anne–style house for sale at auction starting at $500. He had little to no money, and set about searching for abandoned materials, like cabinets and wood trim and beams for renovation. And slowly, bit by bit, working cold night by cold night, Drew Philp saved the house. His book, A $500 House in Detroit, is a remarkable tale of self-reliance, of community, of turning away from the expected hunt for money and turning instead to relationships—and his telling is so, so well done. We asked Drew to share a few thoughts in advance of his appearance at the National Writers Series April 11, 7 p.m., at the City Opera House in Traverse City. Tickets online.

You finished your book a couple of years ago and released it about one year ago. What changes have you seen in Detroit since then?

It seems the city is getting ready for even more redevelopment. They are knocking down even more houses. The momentum downtown is picking up steam. It’s a very, very different city than the one I moved into in 2009.

In reading your book, it’s clear that finding community was a huge and rich part of your journey. Talk about the community you found.

I was looking for likeminded people, people who were not necessarily driven by the same things that drive most people in our culture—which is generally money. I’m much more driven by the relationships we build with one another. In the long run, that is what gives us healthy and happy lives. I was looking for people I could get along with. People who I would not be lonely around.

You encountered a resilience within the people in your neighborhoods, which I think comes as a surprise to many people. When you look into that resilience, if you really stripped everything down to its barest most essential thing, what was it that most accounted for that resilience, kept it alive?

I think that resilience came from a deep sense of place and community. At one point Detroit had the highest rate of African-American home ownership in the nation. It had arguably the best schools in the US for a time, and was one of the few places in the US the black middle class was allowed to flourish, not to mention the middle class in general—and this was in concert with, and not separate from community. People understand from experience what life could be, and when things got tough refused to abandon each other.

How is the redevelopment you are seeing affecting the neighborly connections you found?

As the attention receded from Detroit over the course of 60 years, the city developed a unique subculture. It was built on what I call radical neighborliness. That is still going on to a large extent. But it is being threatened.

But, one of the things going on in society now is people are looking for community in a larger sense. Baby Boomers moved away from that, and my generation is finding that is not the way to go for them. A lot of us were raised in faceless suburbs with no sense of community. So we are seeing young people moving back to cities. That will be bigger and bigger as we get older.

In the book, there’s a tension I sensed between you and how you viewed, say, other young people moving into the city, young people with money. Like you referred to them as hipsters and I got the sense that it verged on something kind of tribal, like “Those people are not moving into Detroit the same way I did. They lack legitimacy.” What’s it like for you to look at those thoughts now?

It’s true some people want to come in and shut the door behind them. And yes, there is a tension between what I call generational Detroiters—people whose families have lived here for a long time—and new people. I’m kind of in between, having been here 10 years. Detroit was not on the national scene back then. It was not cool. I talk about Detroit like a union. Detroit has been on strike for community for a long time. We can treat new people like strike breakers, scabs, or we can bring them to our cause. I’m kind of ashamed to admit that I might have been disdainful of the new people moving in, but I am not anymore. Now I think they can be really great allies in what we want Detroit to be.

As Detroit hits the reset button, do you see any hope that it will be able to avoid the mistakes of the past that led to the racial divide there?

Unfortunately I see the same lines being drawn. Making the same mistakes. Attracting mono-industry. Billionaires dictating policy. A week after declaring bankruptcy, Detroit spent $350 million to build a hockey arena for a billionaire. What if the money had given 700 half-million dollar small business loans for inner city businesses? There is an important conversation going on with people about that, trying to figure ways to bridge those gaps, but it’s a hard question. Detroit is the most segregated major city in the United States.

Are people still finding abandoned houses and fixing them up?

Absolutely. People are still looking for houses and fixing them up. But also the city has demolished thousands of houses in the past couple of years. There are fewer decrepit old houses for people to buy, but there are still many.

What’s something you are excited about in Detroit right now?

Well, I’m excited about wildflowers about to start blooming again. Excited about the changing of seasons and seeing some green. Do people really associate wildflowers with Detroit? Maybe some cities you can pick a bouquet of wildflowers for your girlfriend … don’t know, but it is a magical and wonderful thing to walk about in nature right in a city. I can sit on my porch and see pheasants. I saw a fox recently.

I did appreciate in the book how you explored that notion of nature’s resilience, of wildness reclaiming all ignored spaces. But what about development, culture, anything exciting to you in what you see there?

Our cultural institutions stuck it out and are doing great and important things. Last year was the 50th anniversary of the Detroit riots, or the rebellion, as some call it. The programming about that by the history museum, the library, the Detroit Institute of Art, was absolutely phenomenal. It’s been amazing and continues to be amazing.

Before the show … or after