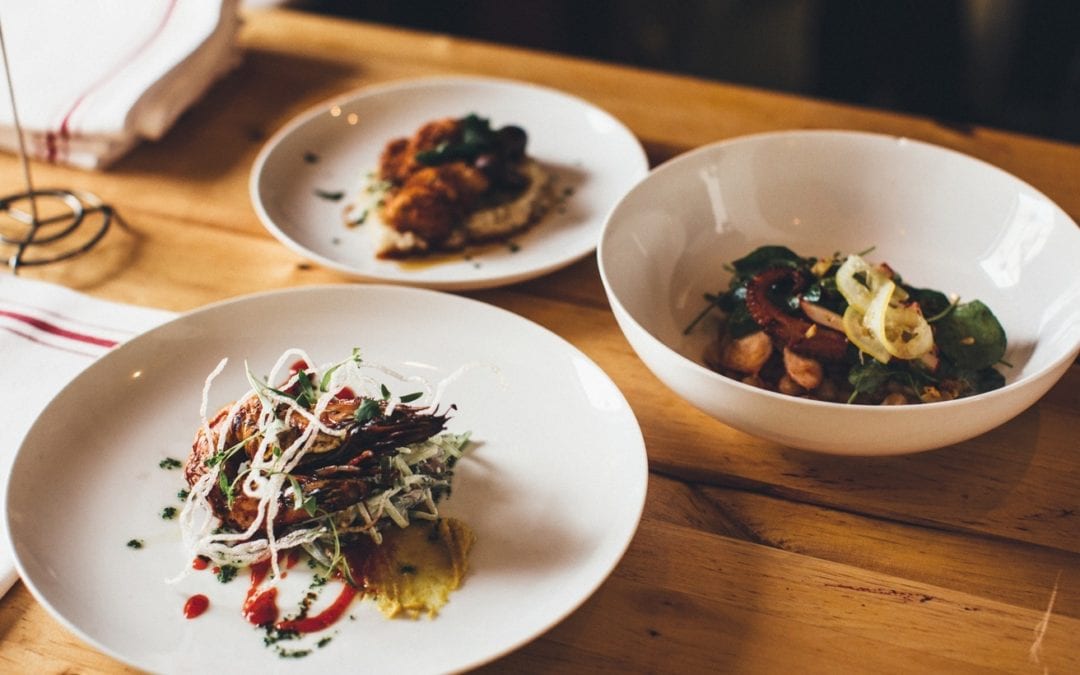 This story is featured in the April 2018 issue of Traverse, Northern Michigan’s Magazine. Get your copy! 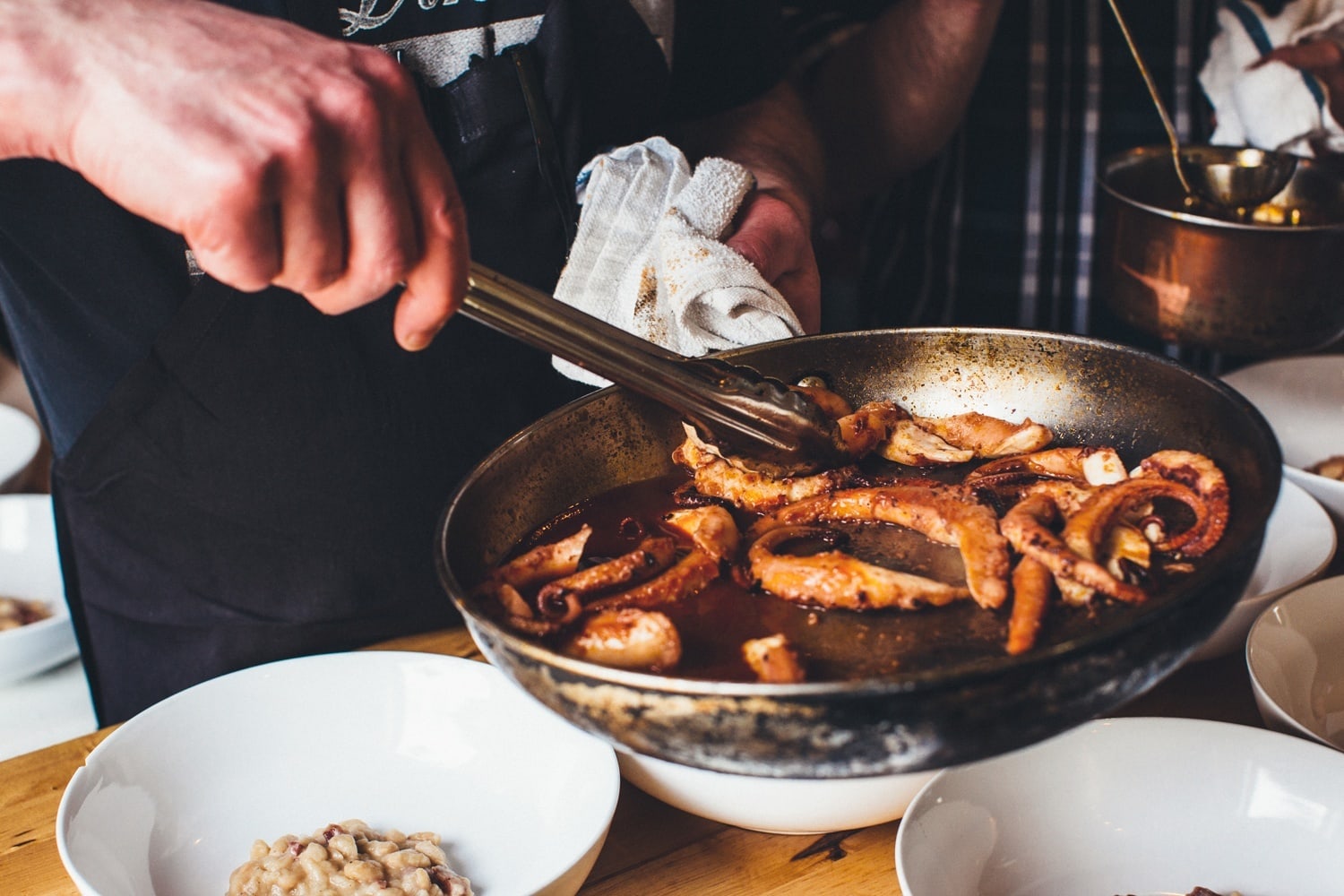 Crouched in a patch of sunlight outside, behind the kitchen door of Traverse City’s Cooks’ House restaurant, chef Scott Steger from the Elk Rapids eatery Siren Hall hunches in the sweet smoky vapor of fresh octopus tentacles charring on a Weber grill. Inside, RJ Karsnick, from the TC cross-town icon Trattoria Stella, dusts fresh veal sweetbreads in focaccia crumbs, pausing to season an ivory pan of celeriac purée. Flames lick the edges of sauté pans. The soundtrack is a staccato clicking of chef knives as tonight’s presenting cooks work back to back in the narrow kitchen.

Assembling their mise en place with nervous excitement, this year’s chosen five furiously prep for the annual Cooks’ House Young Chefs Dinner, a sold-out event showcasing Traverse City’s next class of culinary talent from restaurants around the region. The event puts on display the vibrant sense of culinary community that exists here on the rim of Grand Traverse Bay—competitors are also collaborators, not just tonight, but in a broader sense as they work to push the food scene ever forward.

The 2018 Young Chef’s Dinner on April 23 is sold out, but The Cooks’ House has more incredible dinners throughout the year. 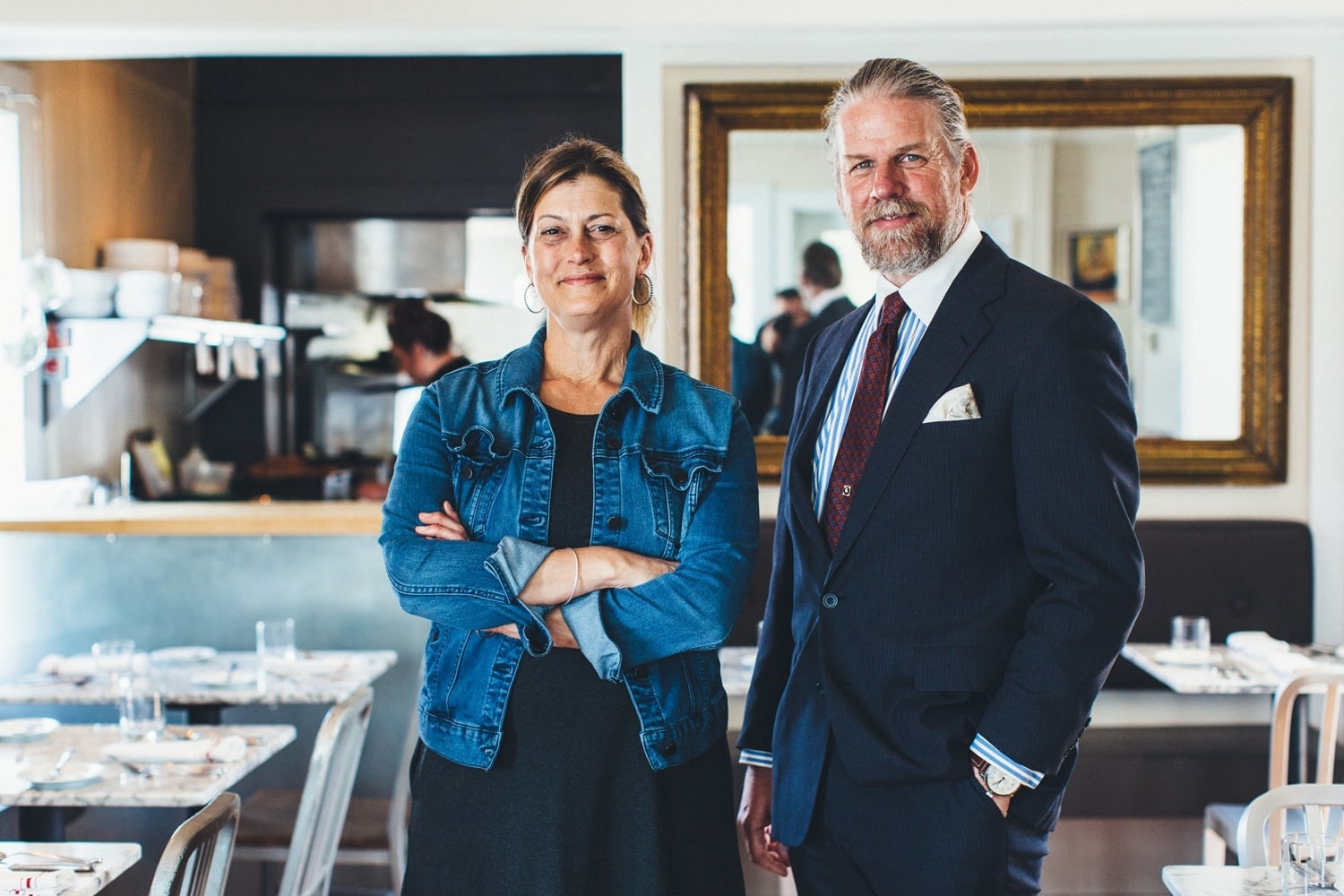 The Cooks’ House co-proprietors—chefs Eric Patterson and Jennifer Blakeslee—hover at the edge of the fray, stepping in occasionally to taste a proffered spoon or analyze a plate presentation. As Patterson slides into the dining room to survey place settings and the evening’s seating chart, Blakeslee beams at the buzzy energy flowing from the line. “This is their night to shine,” she reflects, nodding at Devon Shaw’s mock-up plate of confit pork cheek and tomato ragu. “They’ve spent years in kitchens cooking other people’s food and tonight they get to walk the walk.” Tonight’s walk comes in the form of a dinner with each course designed, sourced and executed by one of the five young chefs to reflect his or her culinary aesthetic. The fury of preparation ebbs as the dining room fills with guests, and the chefs shift into assembly mode.

Five sets of hands methodically work their way down a stainless steel prep table laid with plates. Braised white beans are piled with bright green watercress, chorizo, shards of radish and sliced octopus—the shocking carmine skin flecked with char marks and garnished with a spiral of candied lemon. Wired and obviously proud, Siren Hall’s chef Scott Steger stands before the room in his gunmetal-gray chef’s coat presenting the anatomy of the first course—a clear hit. The diners applaud, and clean plates are whisked away. 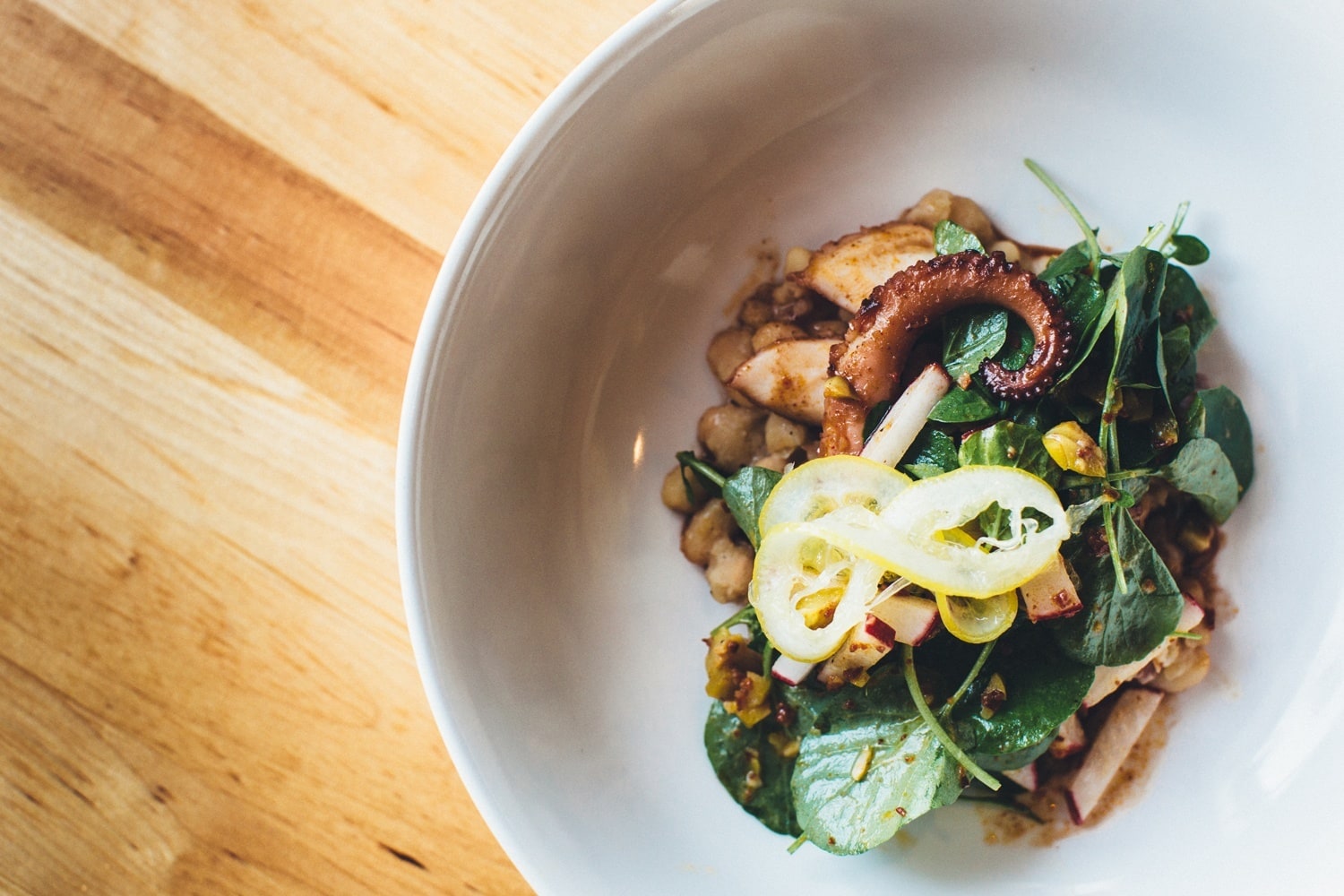 In its brief run, The Cooks’ House Young Chefs Dinner has evolved into an important opportunity to foster networking and community among professional cooks in Traverse City’s rapidly developing restaurant scene. “We’re looking to highlight the skills, creativity and leadership that will turn these young cooks into chefs who could leave a lasting mark on the food of this area. When you’ve been cooking as long as we have, you reach a point where you realize you have something to give back,” Patterson says.

A culture of giving back through mentorship is a central tenet of the Cooks’ House philosophy as Patterson and Blakeslee offer an open kitchen that welcomes anyone to come in and stage (work) for an evening. “You can always learn something from working in someone else’s kitchen,” Blakeslee tells me as the second course—crispy sweetbreads, celeriac purée and fish sauce caramel—lands in front of diners. She makes working in other restaurants part of her own travels. “We’ve had everyone from kids and retirees to professional chefs from Detroit and Chicago come work here for a night,” Blakeslee says. 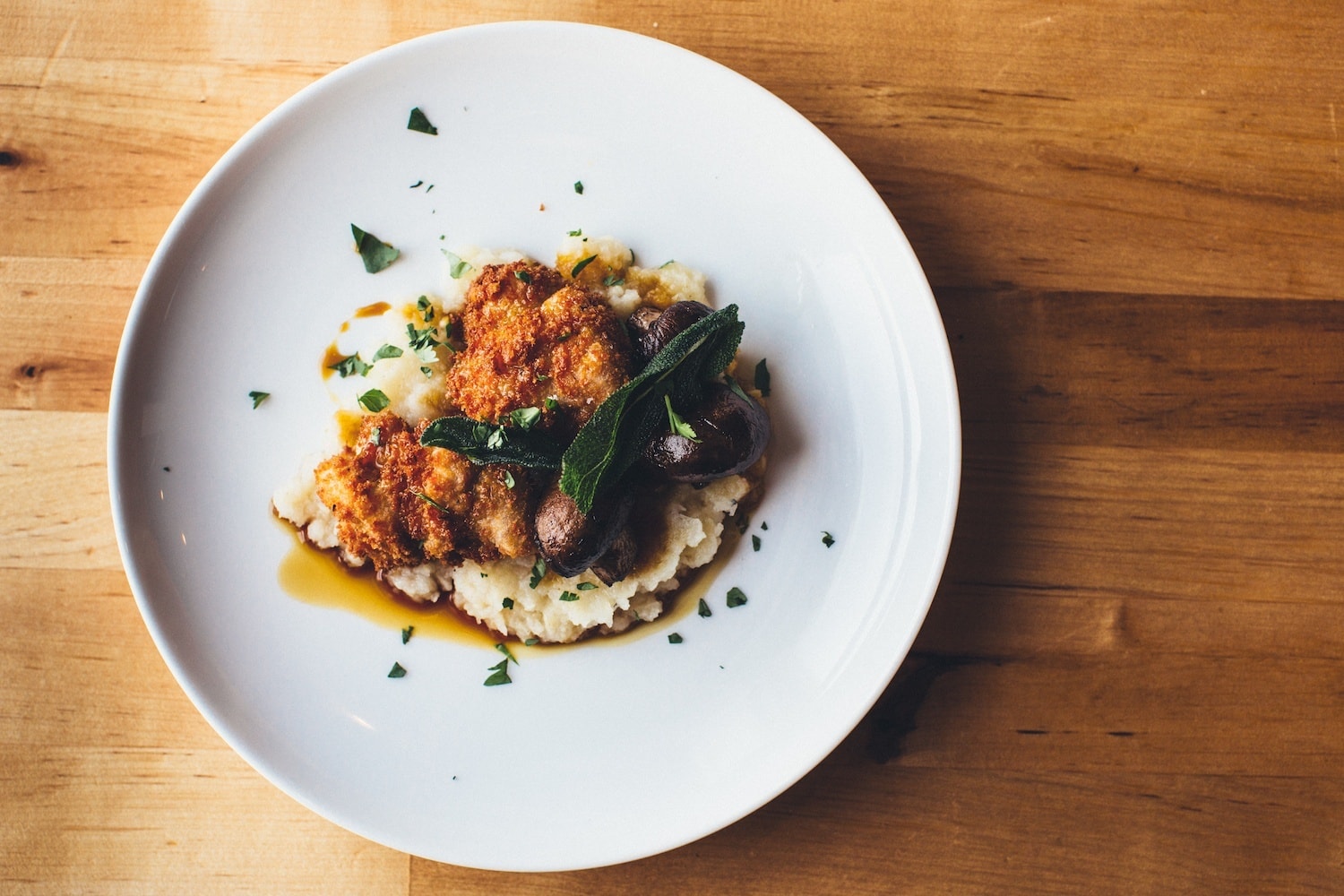 Beyond a night in the Cooks’ House kitchen, Patterson and Blakeslee see Northwest Michigan’s agricultural landscape as a valuable resource for young chefs. “The whole food community here is approachable and collaborative,” Blakeslee says. “Farmers and food artisans like Leelanau Cheese will open their doors so we can learn about the farming and processes behind the products we’re using in the kitchen.”

Knowing the provenance of their ingredients and cultivating relationships with small farmers is a philosophical imperative for these chefs, and they want to help instill that imperative in the next generation. “Wendell Berry said, ‘Eating is an agricultural act,’” Patterson says. “If you’re going to eat, or cook for that matter, you’re taking part in the farming. Working in a market like this affords us a deeper relationship with the people growing our food than we might get in a big urban area.”

This synergy between Traverse City’s food and farming communities has garnered national attention, and when asked if a regional identity is showing itself in our local cooking, Patterson says he is excited by the possibilities. “I’ve always been a proponent of the idea that what grows together goes together,” he says. “And the winegrowing culture here is an important piece of this. After years of creating dishes in our wine dinner series to pair with the local wines, I’m noticing that the proteins that are easiest to raise here like, pork and duck, really sync best with the wines. I think we’re in the early stages of a regional cuisine that will take a few more generations of chefs to develop.” 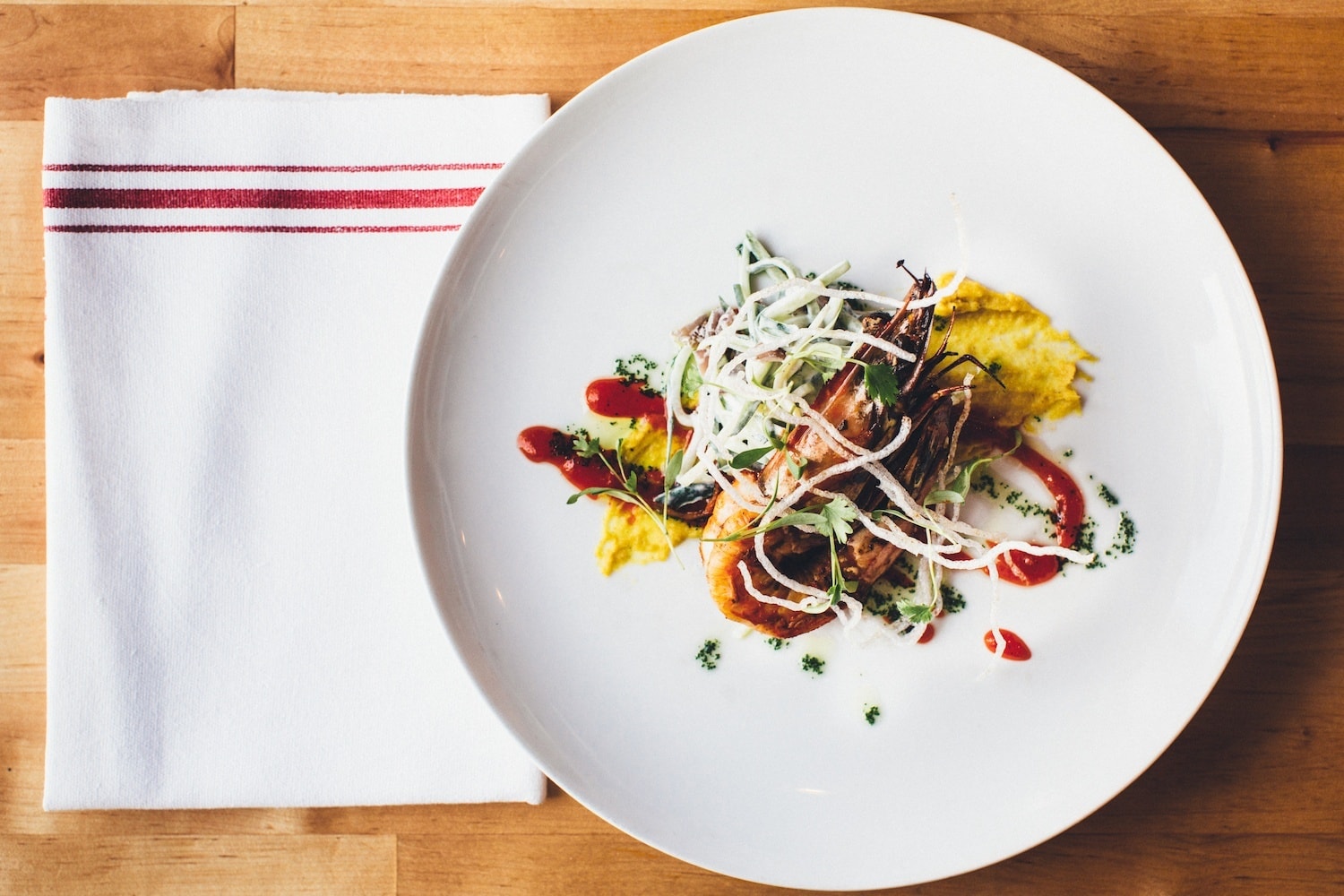 In the dining room, dinner eases on as wine glasses are refilled and Bistro FouFou’s Matt Anderson takes the stage to introduce his course: a grilled Skull Island prawn over curried chickpea purée with red pepper nage and a fresh salad of cilantro, cucumber, charred onion and mint. The evening’s undercurrent of Asian-inspired flavor chemistry and ingredients is unmistakable and, Patterson concedes, a new reality for modern cuisine. “When Jen and I were coming up, food was anchored in classic French technique, but with the whole world now totally exposed on the internet and the ability for these guys to travel, we’re seeing new perspectives and new flavor sets really becoming embedded in the food of this country.”

“We see young chefs have a creative open-mindedness that synthesizes all this knowledge and really creates some exciting flavor profiles,” Blakeslee says.

But as creativity, fusion and the exotic appeal of world cuisine are shaping the new world of food, Jen and Eric point out that certain kitchen fundamentals should never change. “No matter what, we want these guys to come out of our kitchen with a respect for standard, consistency, speed and cleanliness,” Patterson stresses. He wipes an errant drip of tomato confit from the edge of a plate. “The ability to re-create a dish a thousand times over is what separates chefs and home cooks, so as a chef you need to decide where your bar is and never go below it.” 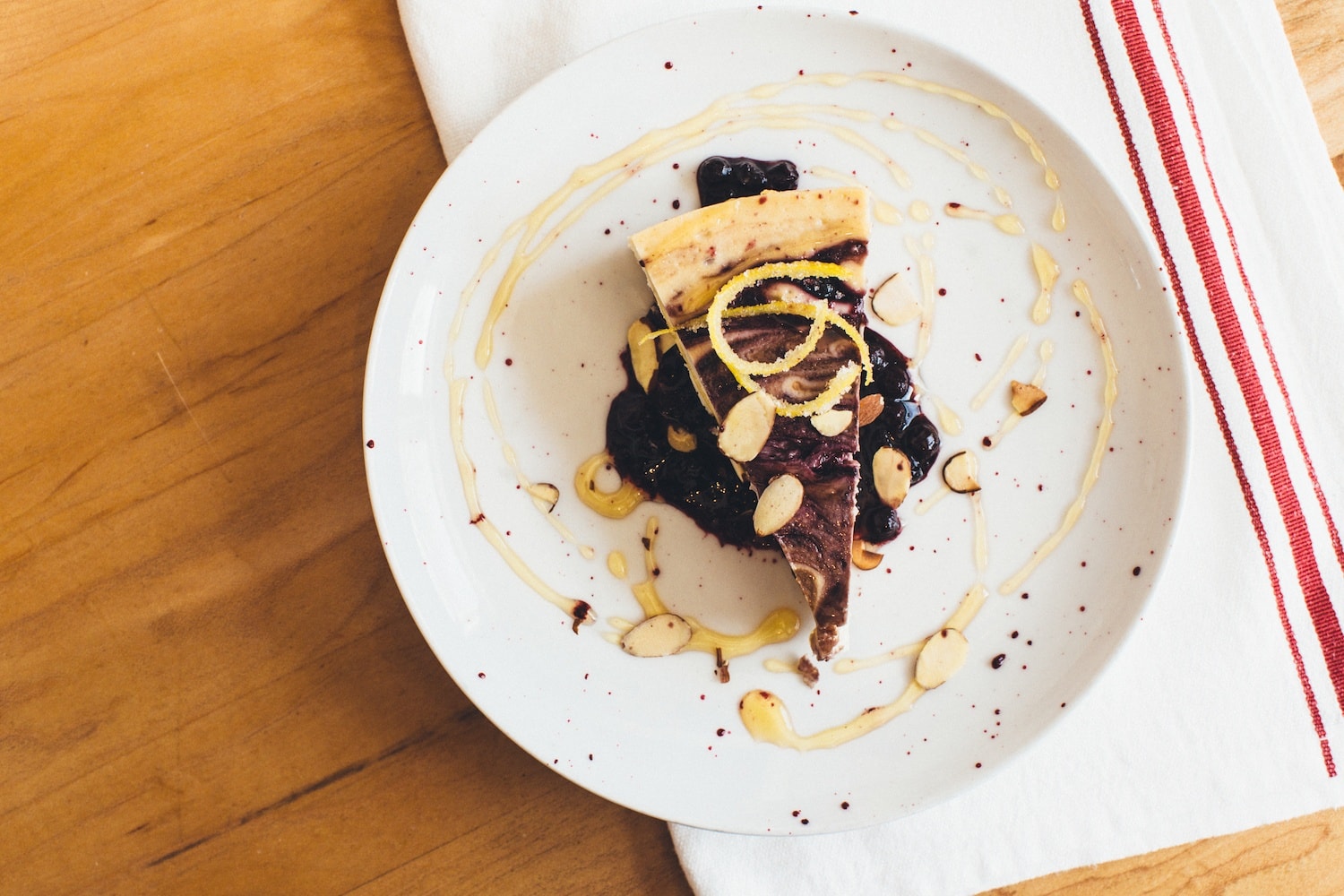 The bar for this evening’s meal has just discernibly raised a level higher as Kathryn Thurston of 9 Bean Rows, in Suttons Bay, delivers her dessert, a delectably light and nuanced lavender and Earl Grey goat cheese cake slathered in blueberry thyme compote. Judging by the closed eyes and audible sighs of delight, Northwest Michigan’s food scene is headed in the right direction. 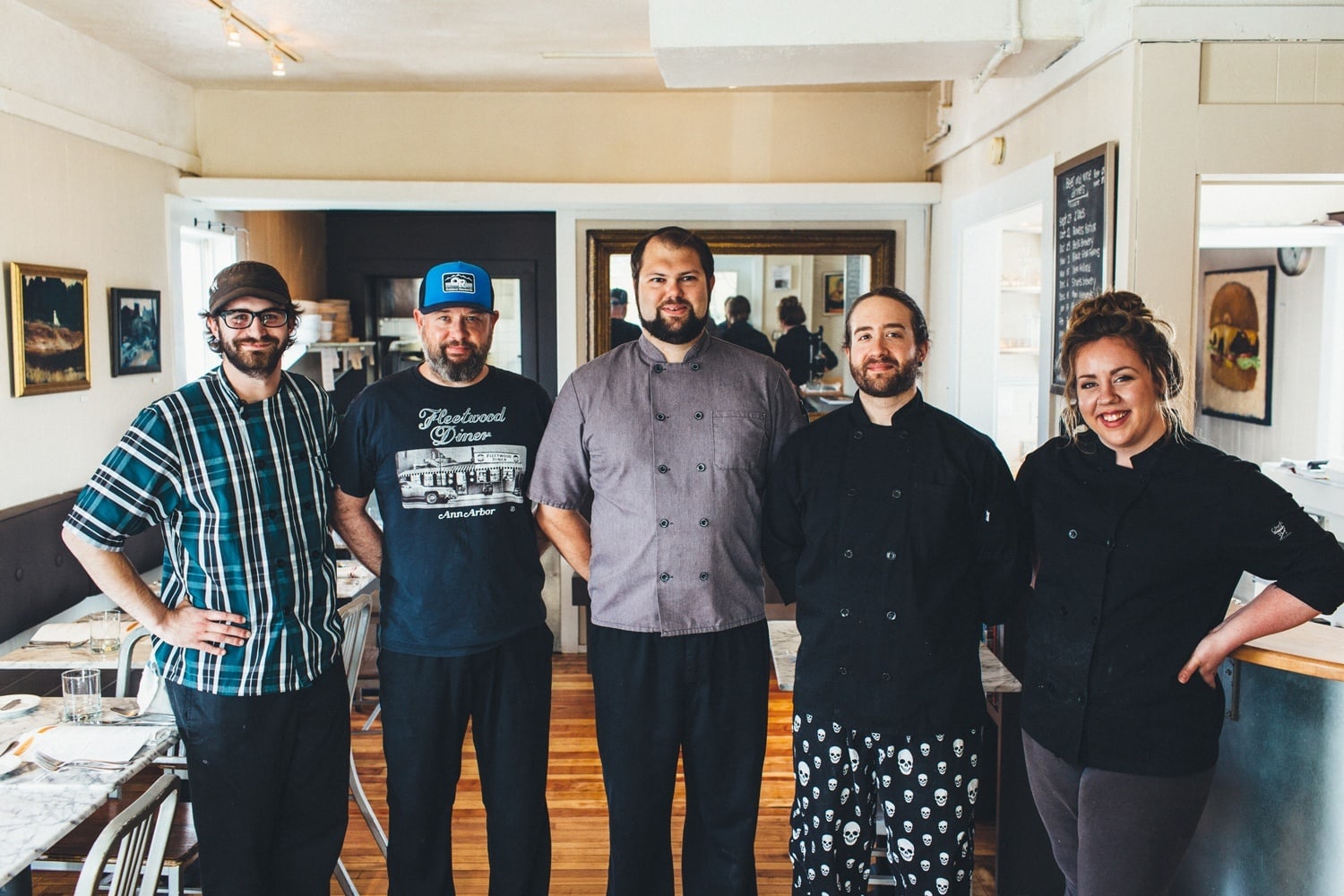 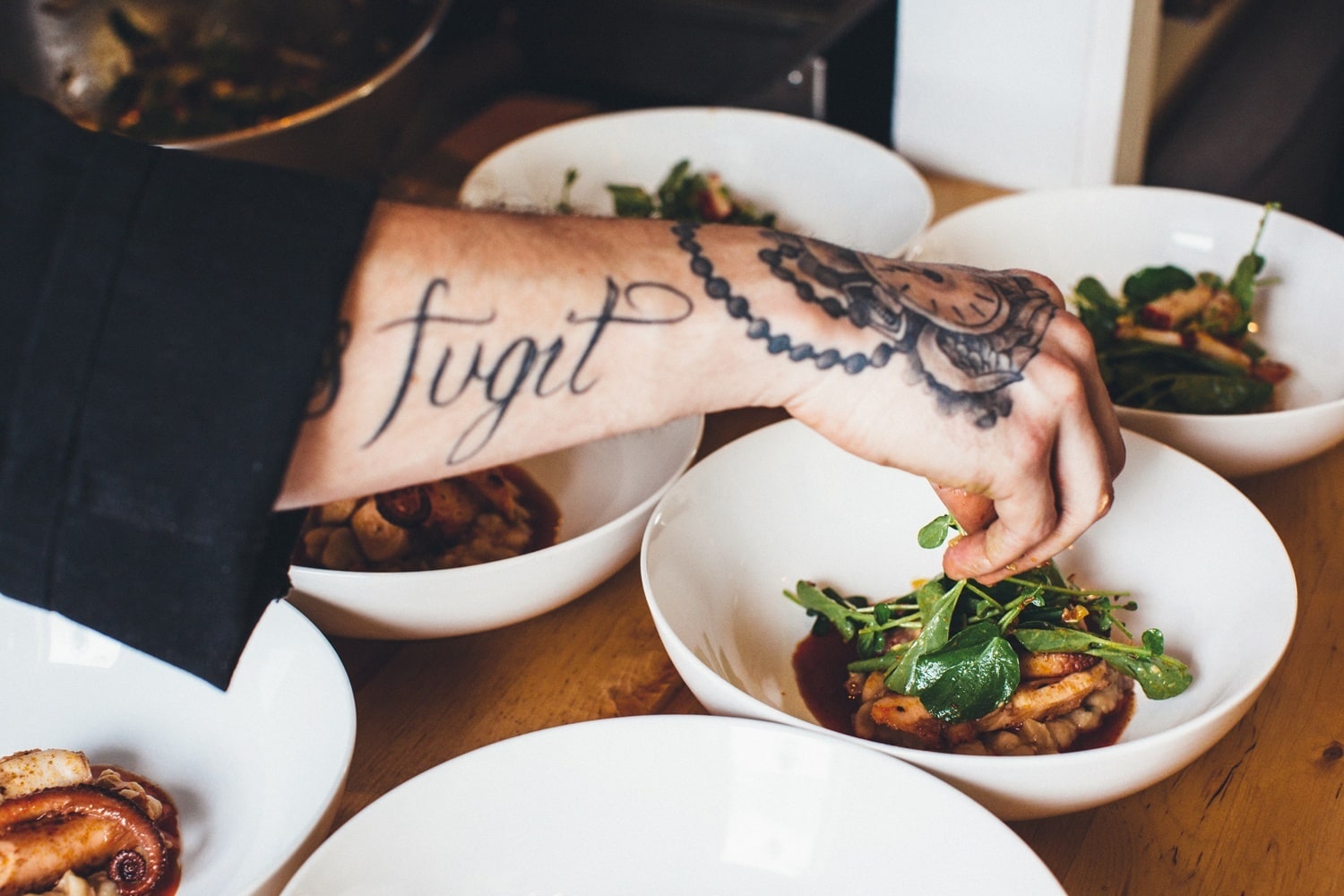 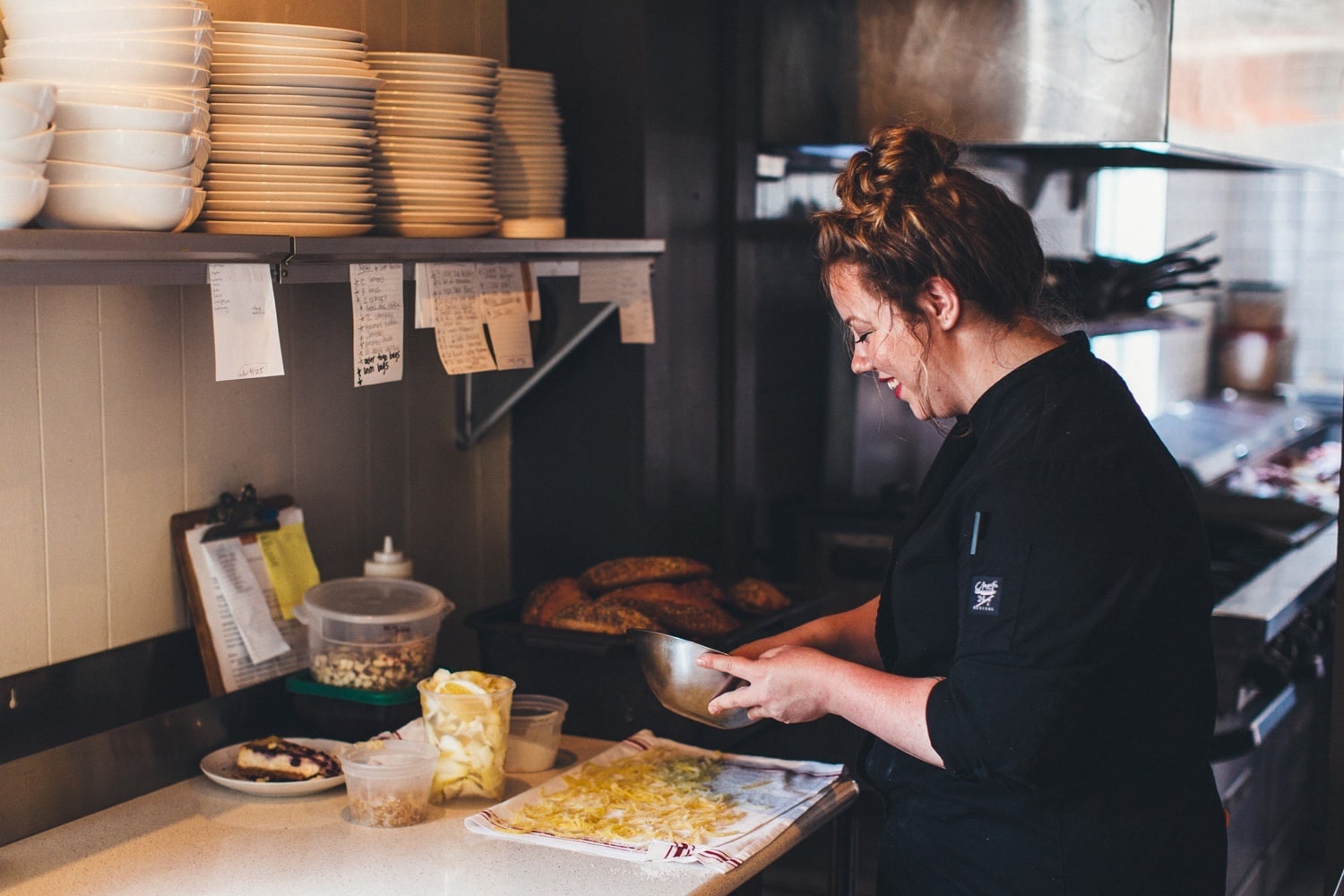 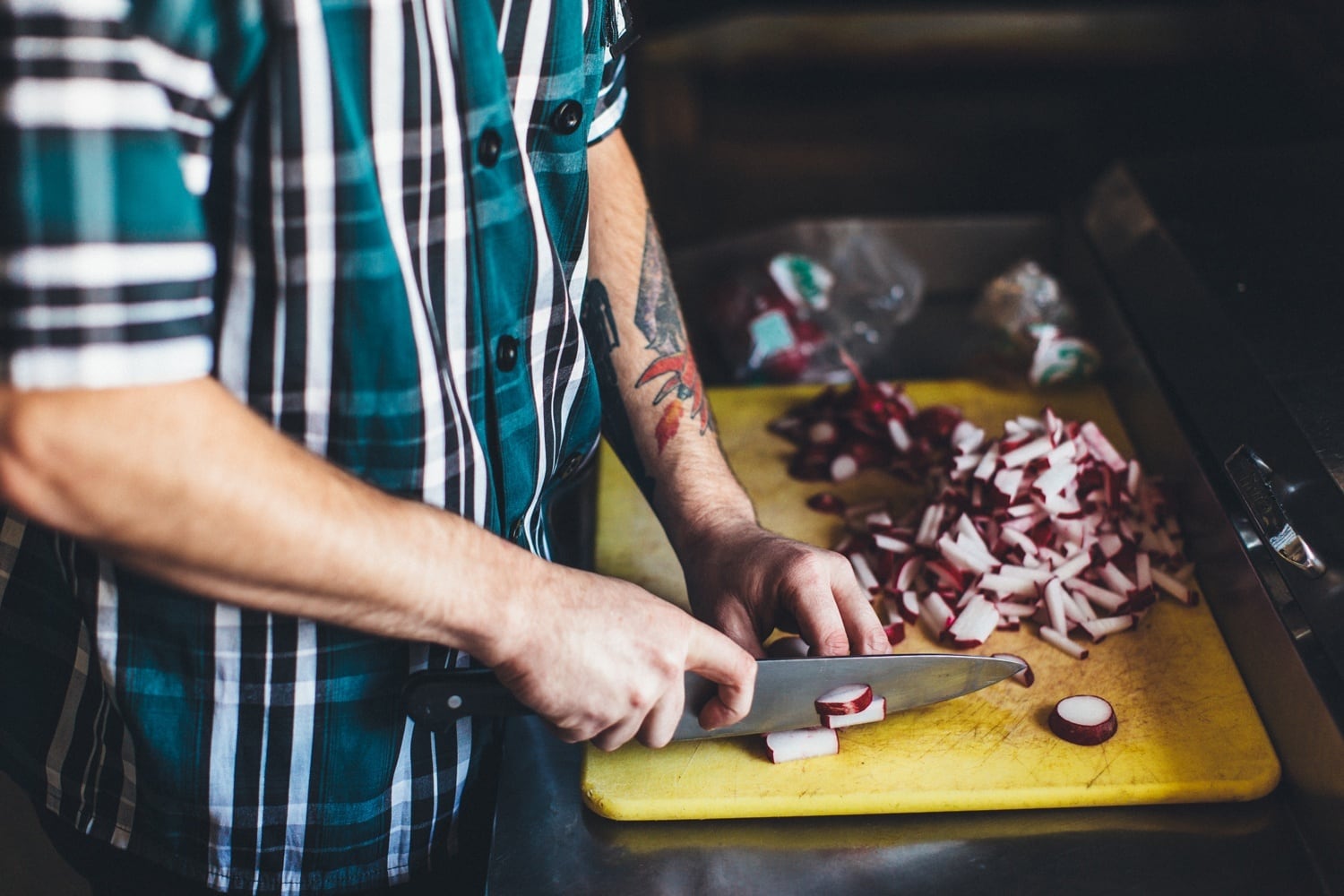 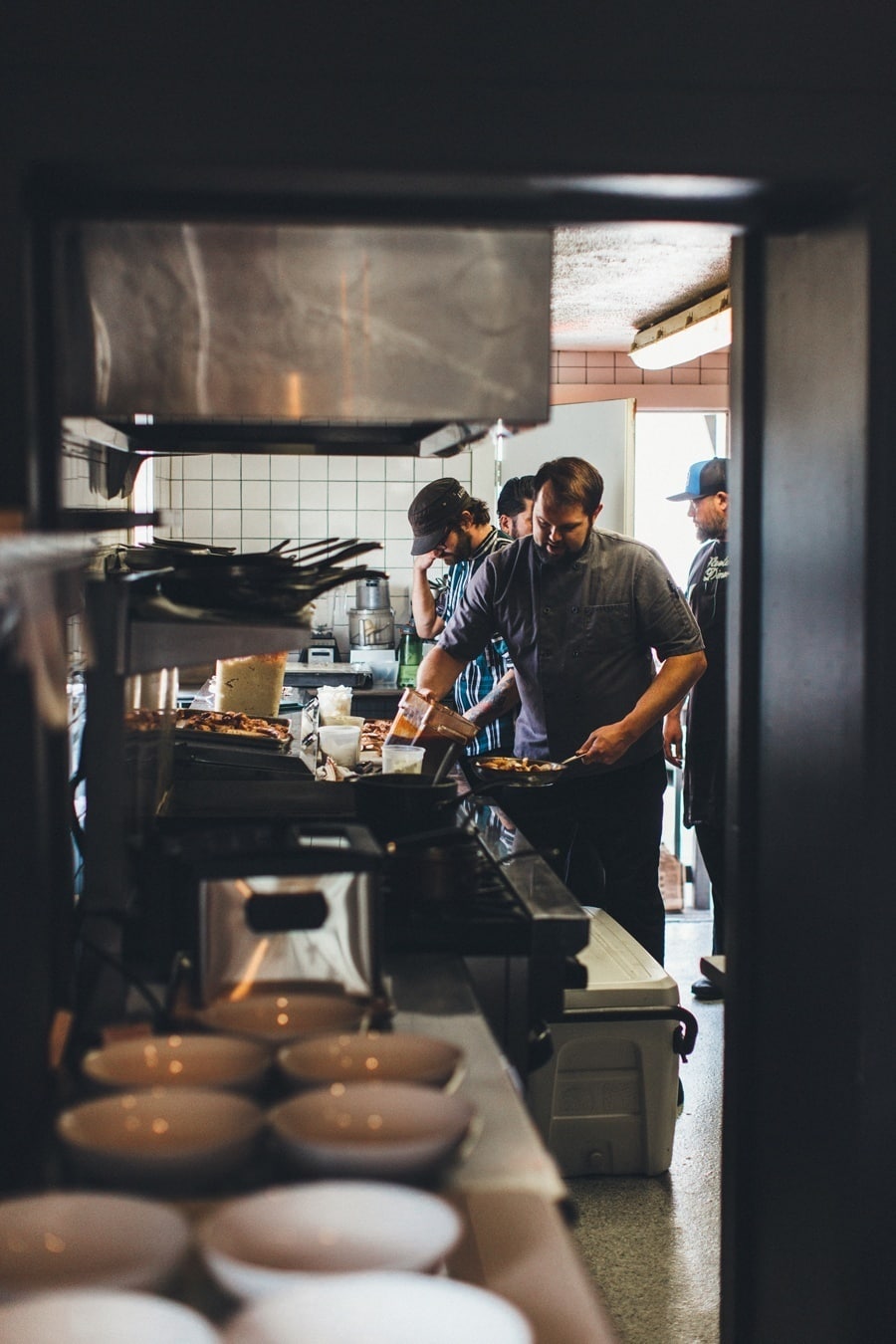 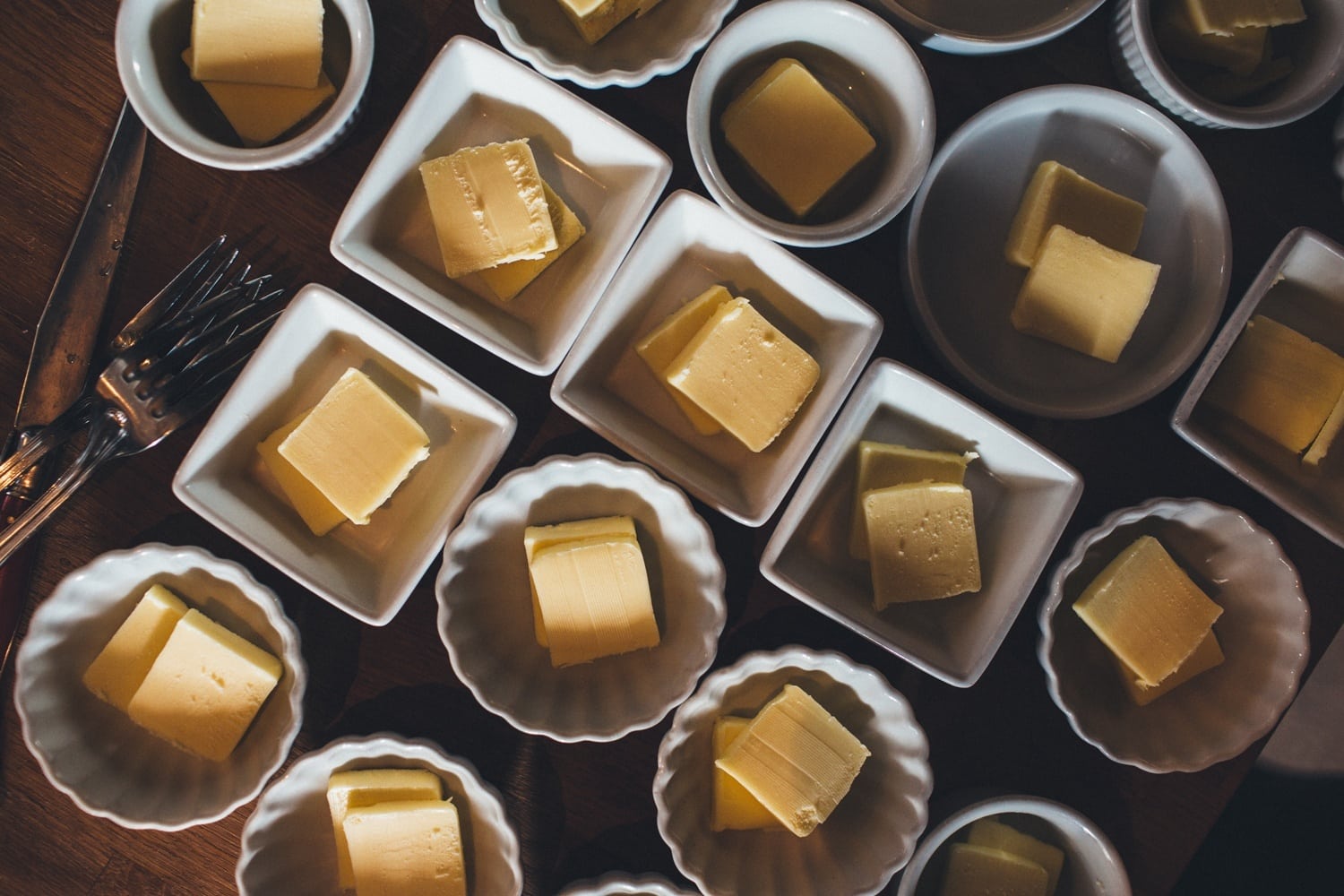 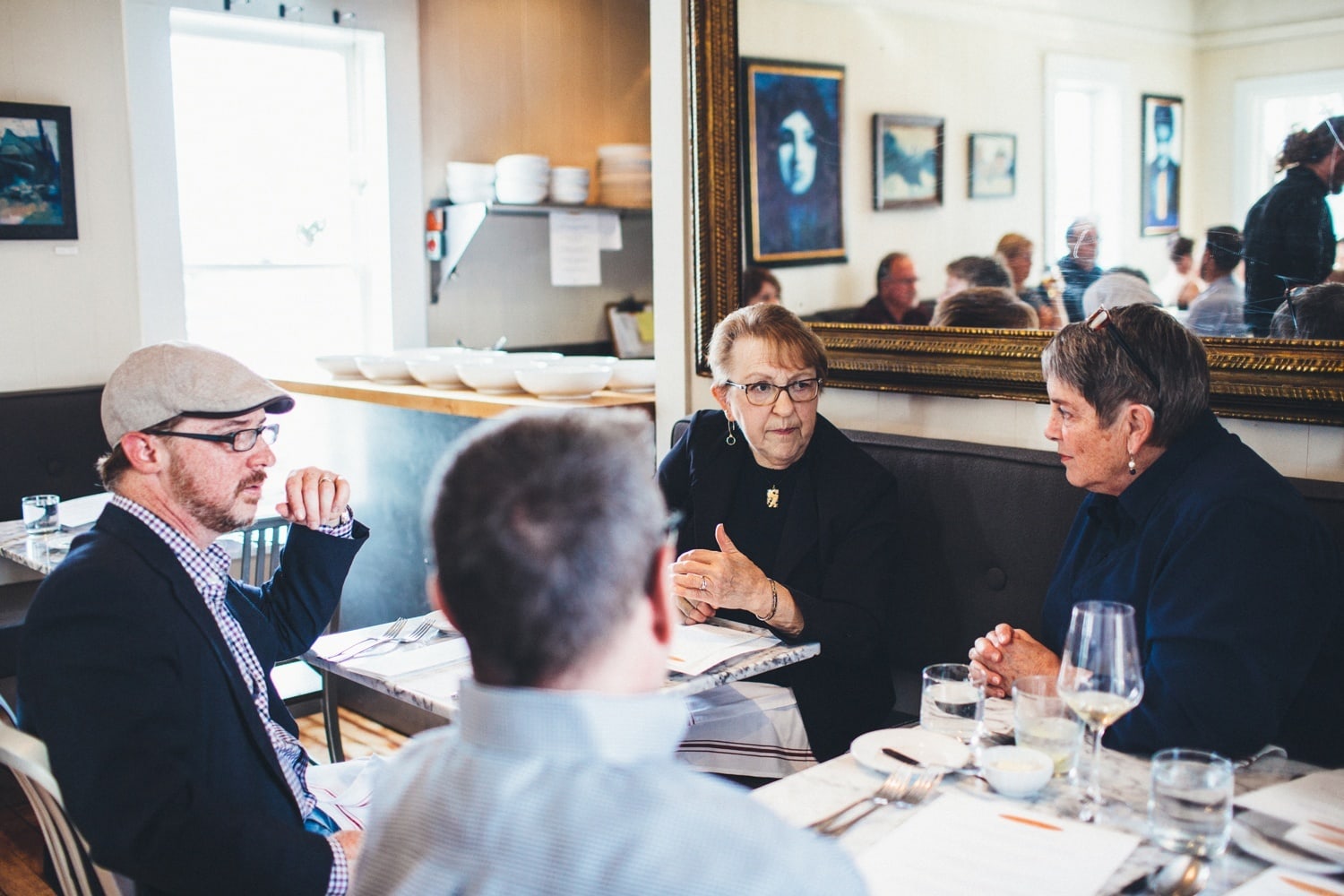 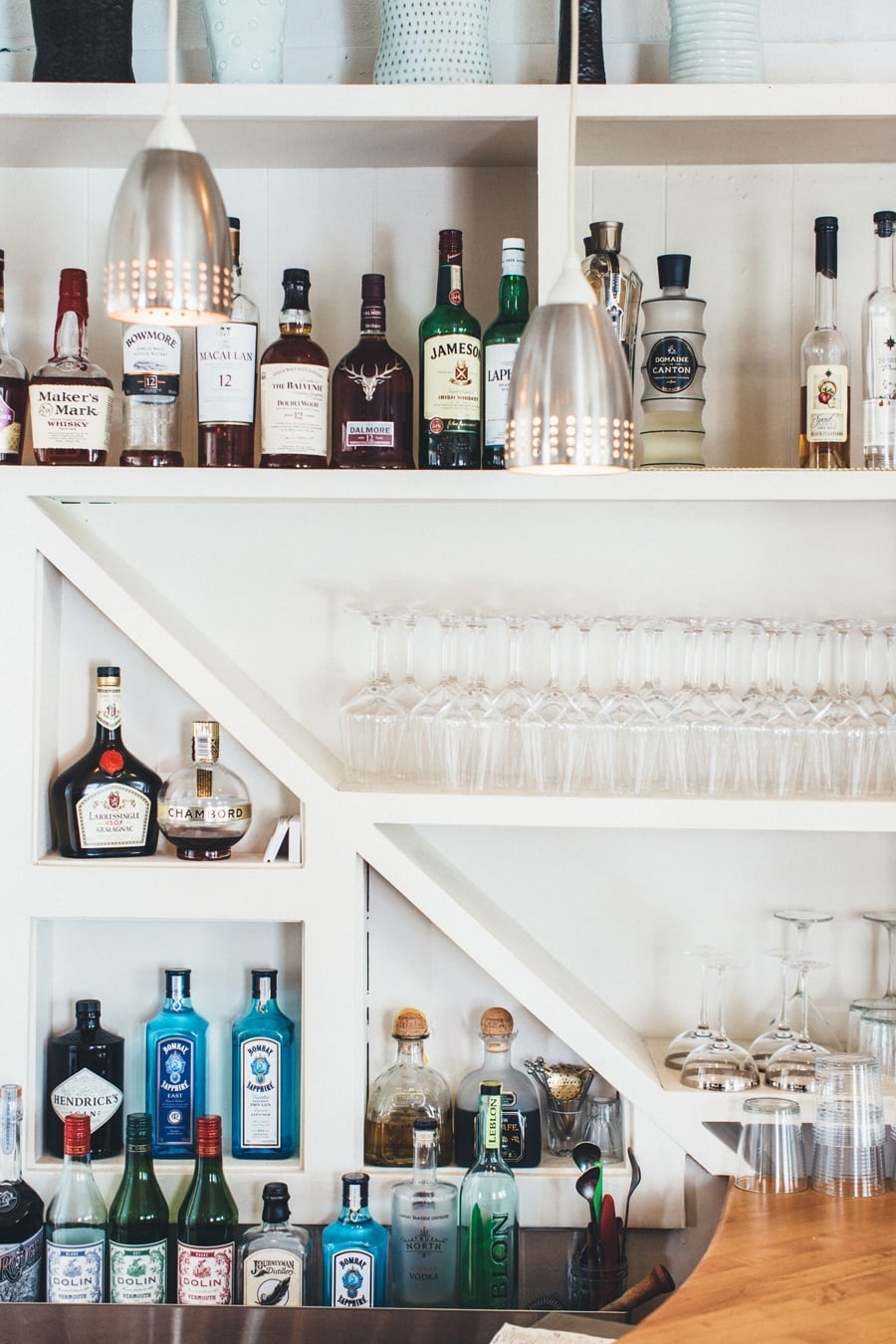 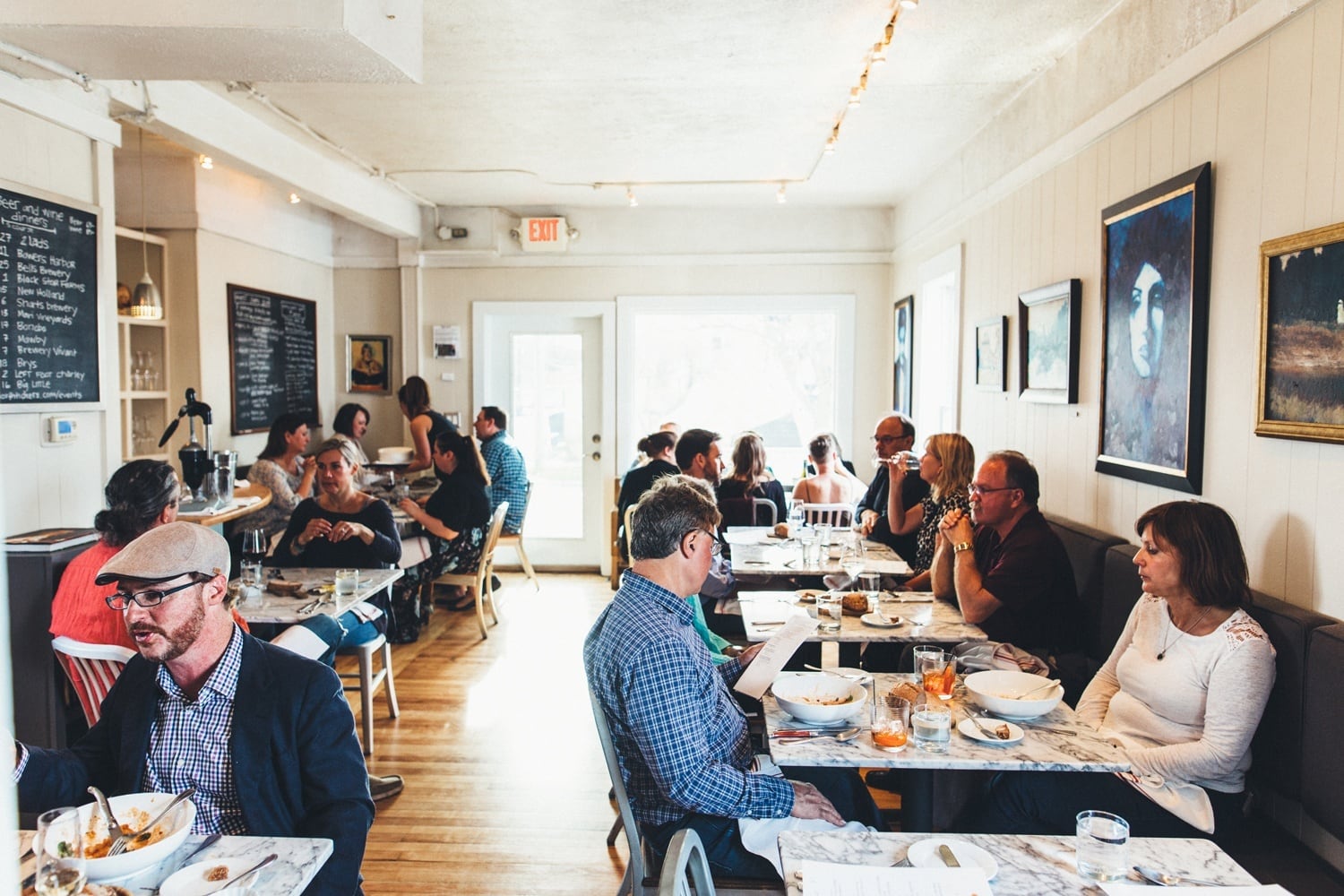 Listen to Lick the Plate! A podcast for people who love food and Northern Michigan.
Episode 1 features chef Jennifer Blakeslee at Cooks’ House!