Go on a Beer Road Trip: Your Guide to Upper Peninsula Breweries 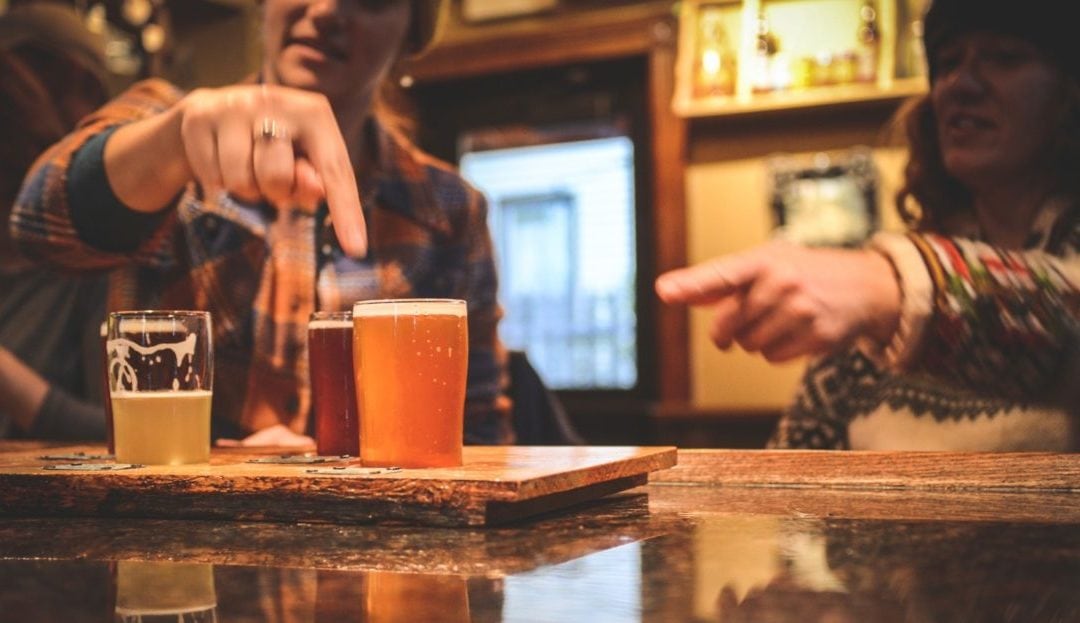 If you seek delicious craft brews, look … up! We love everything about the Upper Peninsula: the moose, the sprawling forests, the quaint and historic towns—and the beer. Spread out across the length of the U.P., you’ll find more than 20 of Michigan’s best breweries and tasting rooms. But don’t just take our word for it. Go! We’ve mapped out your guide to Upper Peninsula breweries. All you have to do is grab your hiking boots, fill up the gas tank and head over the mighty Mackinac Bridge.

This family-friendly establishment is both a micro-brewery and micro-distillery. They’re also serving up great food—small plates, build-your-own pizza, sushi and more—and have a pool table, shuffleboard, Ms. Pac-man and Galaga (games for the 18+ crowd only).

The Soo Locks have always drawn Michigan-loving tourists to the area, but now it’s an absolute must-see for beer lovers as well. Soo Brewing Co., which opened in 2011, prides itself on following old-world brewing traditions. Bring your own snacks from any number of neighboring restaurants and spend some time with the delectable craft beer and classic small-town feel of Soo Brewing.

Just a few blocks down on W. Portage Avenue you’ll find this gem. Whether you’re checking out The Locks or just passing through, this brewery/winery is worth the halt. With both wine and beer made onsite, there’s something for everyone! Enjoy a glass of reisling or a pint of cream ale—or both.

Farther west, you’ll find some of Michigan’s most famed falls and the appropriately named Tahquamenon Falls Brewery just minutes away. Top off a long day of hiking and paddling with an elaborate spread of Lake Superior whitefish, pasties and freshly baked bread. The brewery features a full restaurant menu with lunch and dinner entrees to pair with a rotating cast of beers like the Black Bear Stout and Porcupine Pale Ale. This hidden gem is a must for Michigan craft beer enthusiasts as well as the hungry hiking partner.

Still farther west along the top edge of the peninsula, you’ll come to Grand Marais. The town serves as the eastern gateway to Pictured Rocks National Lakeshore. The old-style U.P. town sees a fair bit of traffic from adventurers throughout the summer and autumn months. Just as worthy of a visit as the national lakeshore is Lake Superior Brewing Co. The brewery is known for its spectrum of craft brews and quirky food menu, which includes garlic parmesan popcorn and scotch eggs.

Munising is set between Pictured Rocks National Lakeshore and Hiawatha National Forest. So the town’s well-known brewpub, Shooters, is obviously a great destination for outdoor lovers. Go for live music every Friday and Saturday. (During summer, brick oven pizzas are served up on Fridays, and who doesn’t love pizza.)

Fan of waterfalls? Munising Falls, Horseshoe Falls and Memorial Falls are just a few that welcome you to experience their tranquil, and sometimes thunderous, beauty. Joining Shooters in 2016, this brewery is a pleasant addition to this beloved town. Sip the Tart Cherry IPA and fall in love with Munising.

Marquette is one of the U.P.’s worst-kept secrets, and we’re okay with that. Small shops and bigger commercial businesses alike draw visitors and locals to the thriving downtown. The Vierling, Marquette’s oldest brewery, uses brewing equipment imported from Hungary to handcraft some of the Upper Peninsula’s finest ales. Try the honey wheat and order some whitefish bites. 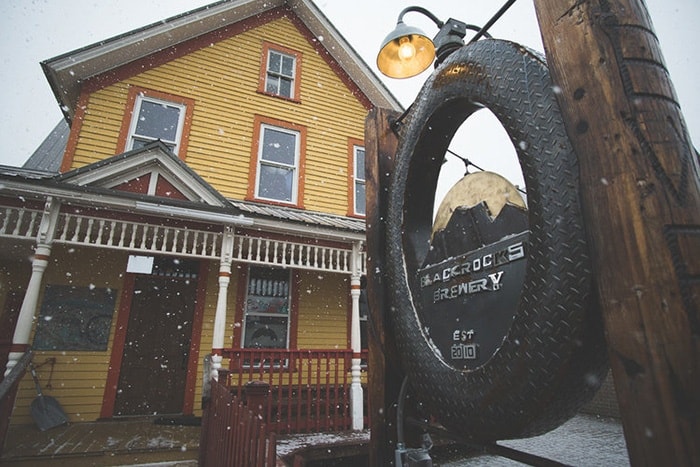 Just down the road from The Vierling, you’ll find “the yellow house on the corner.” You don’t have to knock or ring the doorbell; if you’re here for great brews, just come on in. Blackrocks Brewery has been drawing droves of beer lovers into its converted-house taproom since 2010. Try Grand Rabbits, a dry-hopped cream ale, and the 51K IPA, which will “burst hops all over your face.”

Still within walking distance of both The Vierling and Blackrocks, Ore Dock Brewing Co. has a long list of award-winning Belgian beers that’ll keep your tab open. This brewery also features live music and has a cozy, rustic atmosphere you’ll be hard-pressed to leave. Just remember, you have plenty more stops to make along your brewery-hopping way!

Michigan’s first cooperatively owned brewery is located in Marquette, conveniently off of the 12-mile Marquette City Multi-Use Path that takes you through some of the most scenic and historic parts of the city and along the shores of Lake Superior. Drifa serves up a variety of freshly brewed ales and lagers, and with 500-plus members (and growing) in 2021, you know the beer is good.

Drive 10 minutes west and you’ll stumble upon the newest addition to the Marquette brewery scene. Opening in November 2016, the Barrel + Beam’s passion for bottle-conditioned farmhouse ale secures its place as one to visit. Whether it’s summer or winter, you’ll find a home at this brewery.

Luckily, once you manage to pry yourself away from Marquette, you won’t have far to go for more amazing U.P. beers (approximately a 25-minute drive). The town of Ishpeming is known as the birthplace of organized skiing and is home to the National Ski Hall of Fame. In case that fact doesn’t seem like reason enough to visit, we’ve found this awesome little gastropub to include on your brewery tour; Jasper Ridge Brewery opened 20 years ago, and has since worked to perfect its brewing craft. Jasper Ridge hosts a rotating cast of seasonal beers, but always has a carefully chosen set of wheat beers that pair perfectly with the brewery’s mouthwatering burgers.

The winters may be long, but there is no shortage of those who make the most of them within this town. Inside the historic Mather Inn is a seven-barrel brewery with an unmatched love for small batch brewing. Take a break from exploring and grab a pint of Gnome Wrecker Pale Ale before you visit the National Ski Hall of Fame and the Cliffs Shaft Mine Museum.

Keep going up that peninsula! Voted one of “The Best Small Towns in America” and set into the rolling hills that edge the Portage Canal Waterway, Houghton is one of the Upper Peninsula’s loveliest towns. Houghton’s business district supports a host of small businesses and shops that sell all kinds of outdoor gear, gifts and other U.P. treasures. The Library, one of the town’s two breweries, sports a whole cast of its own delicious beer, brewed onsite, directly overlooking the waterway. Order a flight or a couple of pints while you wait for your food—The Library is famous for its pizza and burgers. 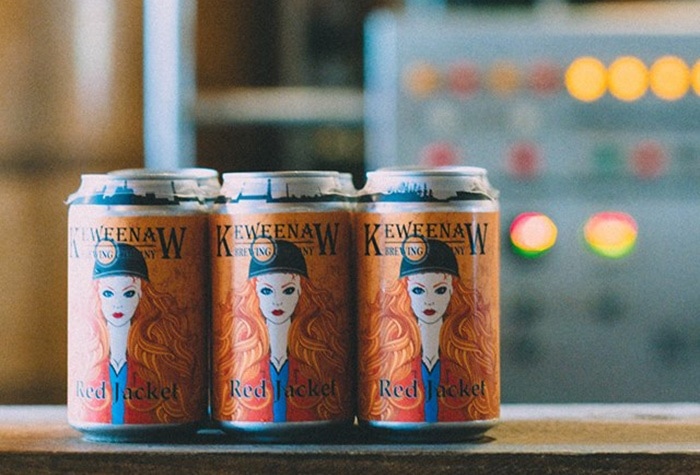 Just a little farther this time. One of the coziest stops you’ll make along your way is at Keweenaw Brewing Company, just up the block from The Library. KBC is the Upper Peninsula’s most productive brewery, drawing crowds from far and wide with brilliant, aromatic and famously inexpensive craft brews. KBC also distributes beer across Michigan and well into Wisconsin and Minnesota. Grab a snack then head over to the lounge area to enjoy your beer(s) around the brewery’s irresistibly cozy fireplace.

At one time the hub of the Upper Peninsula’s mining industry, Calumet (originally named Red Jacket for a Native American Chief of the Seneca tribe) has become a fascinating historical district. Red Jacket Brewing Co. is still located in its original building, constructed in 1903. The brewery itself seeps with captivating history and, of course, magnificent brews. Stop in for an IPA, Coffee Oatmeal Stout or any number of rotating seasonal beers. You’ll leave with a sense of the deep history engrained in this U.P. town. And a growler. Leave with a growler, too.

“Where the road ends” at the northernmost tip of Michigan’s Upper Peninsula, you’ll come to Copper Harbor. Charming novelty shops and an old-time candy store line the streets, and miles of breathtaking hiking trails edge the bluest parts of Lake Superior. Just steps from the water’s edge sits Brickside Brewery. The tiny brewpub offers a hearty list of brews, including their signature Quincy Brown.

Once you’re back from the edge of Michigan’s Upper Peninsula, you’ll find this brewery. Located just two minutes from the Montreal River and only one minute from the Iron Belle Trail, sits a quaint pub-style taproom. Right in the heart of Ironwood, it’s perfect for those looking for adventure. Grab a pint of their Drift North IPA and enjoy this hub of outdoor fun.

Hit up Hereford & Hops on your way home. Escanaba boasts some of the U.P.’s most gorgeous views and adventure opportunities. Explore trails, fish for walleye and bass, admire Lake Michigan’s Little Bay de Noc and drink some unforgettable brews. The brewery offers an awesome seasonal selection, which includes a Christmas Ale that changes in flavor and style each year.

Did you know Escanaba has the most freshwater shoreline in Michigan’s Upper Peninsula? Channel your true inner Michigander with a pint of good ‘ole Yooper Ale and play cornhole or horseshoe. There’s even a dog-friendly patio. You just can’t go wrong.

Park your car one last time at this harborside tasting room. The Mackinaw Trail Brewing Company opened during the summer of 2014 to accompany Mackinaw Trail Winery., With 14 taps, you’ll always find a fresh rotation of local brews.