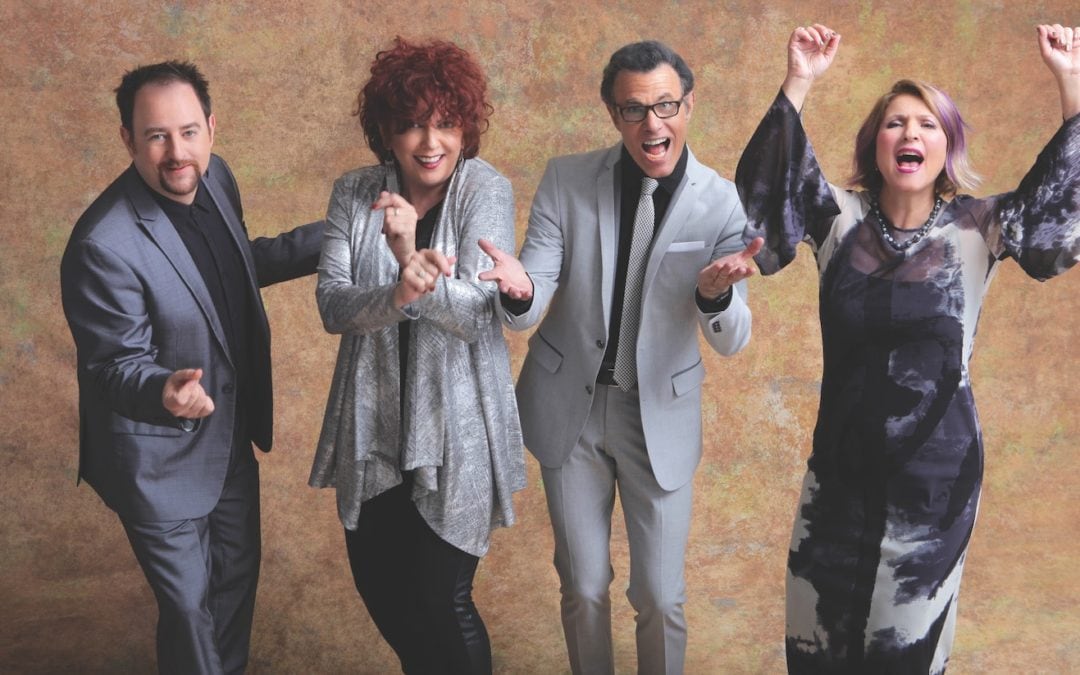 Despite the fact the group and its members have won multiple Grammy awards for jazz recordings, Janis Siegel doesn’t think of The Manhattan Transfer as a jazz ensemble. Instead, she points to another vocal group who are their friends and occasional concert partners. “New York Voices is really a jazz group,” says the vocalist, who will perform with the rest of The Transfer Friday, March 16.

Okay then, let’s look elsewhere to define the sound. The Manhattan Transfer has also won two Grammys for pop recordings—so are they a pop group? Nope, says Siegel. Famed for close harmonies on a capella tunes like “A Nightingale Sang in Berkeley Square” or “A Foreign Affair,’ Siegel eschews that description as well. “A lot of people think we’re an a capella group, but we’re not.”

Though nominated for a Grammy for Best Country Collaboration with Vocals for a tune with Willie Nelson and Asleep at the Wheel, the group is assuredly not a country outfit. And while the quartet sings r&b songs and doo-wop, Siegel refuses to use those labels either—or any others. “We never defined ourselves. We’ve always been eclectic,” she says.

That’s for sure. Since debuting in 1972, The Manhattan Transfer has swung from bebop to gospel, pop to fusion, swing to Brazilian to kids’ music to holiday sounds to—well, you get the idea. “Over the years we’ve done a lot of styles,” says Siegel in a bit of understatement. “The concept of the group allows for that.”

Cheryl Bentyne joined Siegel, Alan Paul, and founder Tim Hauser in 1979, replacing original vocalist Laurel Masse, who’d been injured in an auto accident and decided not to return to the group. That’s when the quartet really gelled, generating hit songs and winning awards galore. It remained intact for 35 years, though Bentyne had to take time off to successfully battle cancer in 2011 and 2014. Then in October 2014, group founder Tim Hauser passed away. Vocalist Trist Curless had toured with the group when Hauser was ill and was subsequently tapped to replace him permanently. Siegel admitted that in addition to the personal loss they all felt, the switch changed the sound of the group.

“Tim’s voice had a very distinctive timbre, a breathy quality. He loved singing doo-wop bass, he knew that stylistically. He was not a true bass, he was more like a baritone,” Siegel says. “Trist is a younger guy and brings a lot of other things to the party. He’s a serious bass. We have access to those octaves.” The change means some songs from earlier in the group’s career are no longer part of their sets. “’Soul Food to Go’—that was Tim. ‘Java Jive’ was pure Tim.”

But with a new album on the way —The Junction will drop a couple weeks after their appearance in Traverse City—plus those decades of recordings that do fit Curless’s voice, there’s no shortage of material from which to choose. And like many jazz acts (there’s that term again), Siegel says The Manhattan Transfer makes up its set list the day of the show. “We change it up every night, based on what we like, where we are, how we’re feeling.”

So what produces The Manhattan Transfer sound? Siegel says it is a combination of factors. “It comes from individual voices. (For example,) Peter, Darmon, Kim, Lauren—that gets you the New York Voices.” So adding Curless to Bentyne, Paul and Siegel produces The Manhattan Transfer. Second, according to Siegel, is the arrangements. The group has worked with producers and composers like Mervyn Warren and Mark Kibble (both from the a capella group Take 6), Phil Mattson, Gene Puerling, and others who know just how to arrange the songs for their voices.

That might make it sound easy, but it’s not. Developing a cohesive sound, singing in tune, working on entrances and releases, and all the myriad facets of performing both in the studio and live are a challenge.

Plus there’s the fact that all four members of the group have solo careers. Bentyne and Siegel are the most prolific, with more than a dozen recordings each, plus solo appearances. Siegel has also performed with Bobby McFerrin’s Voicestra and formed two other groups, JaLaLa with Lauren Kinhan and former Transfer singer Laurel Masse and the Requinite Trio with pianist/arranger John diMartino and percussionist/singer/guitarist Nanny Assis.

With all that going on and The Transfer’s hit-making days behind them, why continue to record and tour with the rest of the group? Siegel says they did discuss dissolving the group when Hauser died but ultimately opted to continue on. “Singing harmony is such gosh darn fun,” she says.

While that new album won’t be out when the group performs here, Siegel says they will probably do two or three tunes from it. One is likely to be “Cantaloop (Flip Out!),” based on Herbie Hancock’s “Cantaloupe Island” and the rap group Us3’s homage to it, “Cantaloop (Flip Fantasia).” They took the words from the latter and expanded on Hancock’s melody. It’s available to preview on the group’s Facebook page.

So, yes, that presumably makes the Manhattan Transfer a jazz/doo-wop/gospel/pop/hip-hop ensemble. Like Siegel says, the group has always been eclectic.

Tickets for the Manhattan Transfer start at $45.50. Go to CityOperaHouse.org.