A temple of farm-to-table—and even forest-to-table—learning has risen on the shore of a 36-island archipelago in the Upper Peninsula. We head north to discover Les Cheneaux Culinary School.

This story is featured in the March 2018 issue of Traverse, Northern Michigan’s Magazine. Get your copy! 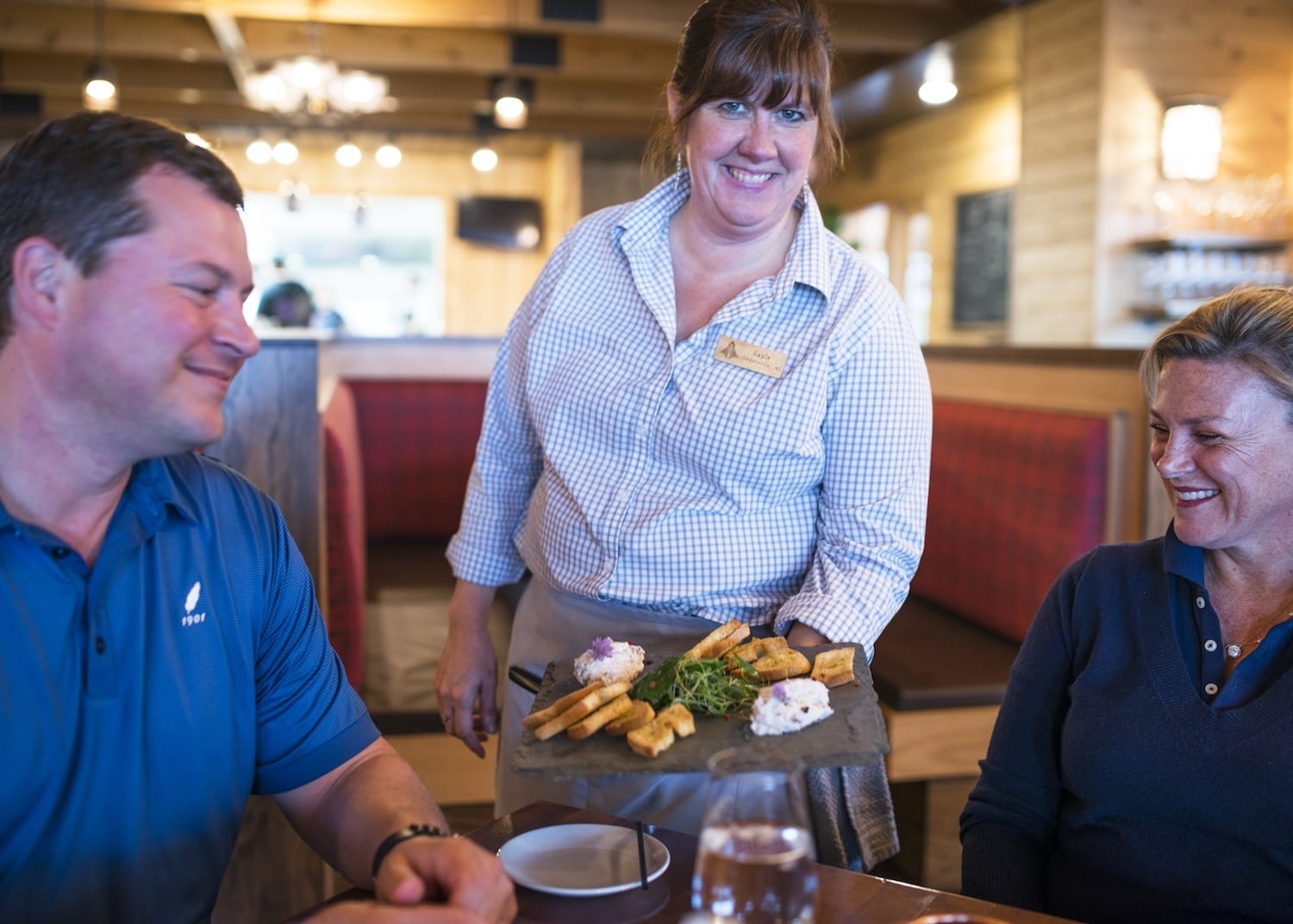 Crossing the Mackinac Bridge has always induced a complex Pavlovian response in me: a twitch in my casting arm from my favorite muskie river; a tickle of pebbles underfoot from the Porcupine Wilderness lonely coast; a full-body heat wave from my friend’s Ottawa Forest brook trout camp, and the woodstove sauna that still hasn’t met an ill it can’t cure. All these Upper Peninsula favorite things have in common the fact that they are west, even far west, of the bridge. But today, in a moment of cognitive dissonance that even the Jeep registers with a stutter, I do something I’ve never in 12 years done. I exit east.

The eastern U.P.—by which I mean the far eastern U.P.—is a sort of hinterland of my Michigan imagination, and nothing is more mysterious to me than the Les Cheneaux archipelago. If you haven’t heard of this cluster of 36 islands that creates a network of calm bays and lucent channels perfect for sailing, boating and fishing, here’s your primer. Back in the industrial revolution, the region was where industrialists from Chicago, Detroit and Toledo went with their families to escape the heat and smog. Today, this watery realm is full of quirky towns, miles of hiking trails, and the raison d’être of my voyage up from the South Mitten, the Les Cheneaux Culinary School, which for four years has been bringing the diverse spoils of the Eastern U.P.’s farms, forests and fisheries to the proverbial table. It’s this hyper-local, proudly regional commitment that makes Les Cheneaux Culinary School unique. And it wouldn’t be possible without the school’s main engine, Chef Zach Schroeder, a lifelong resident of the Upper Peninsula who has been fishing, foraging—and cooking—for most of his life.

“We’re really proud of what we’ve been able to do here,” Chef Zach says as I shadow him during dinner service. Or, at least, I try to shadow him. Zach seems to be in at least three places at once, chopping over here, instructing there, searing, slicing this, tasting that. It’s the work ethic of someone with the highest regard for honest labor, whether it’s his own, that of his students or of the farmers and ranchers who back their trucks up to the school’s back entrance several times a week. At Les Cheneaux Culinary School, whatever comes in the door goes on the menu—that night.

“To be a true farm-to-table restaurant,” Zach explains, “you can’t ask a farmer for a certain product, and you also can’t pass on anything they offer: You buy what they have, when they have it. I’ve never turned down an adequate product at a fair price.” 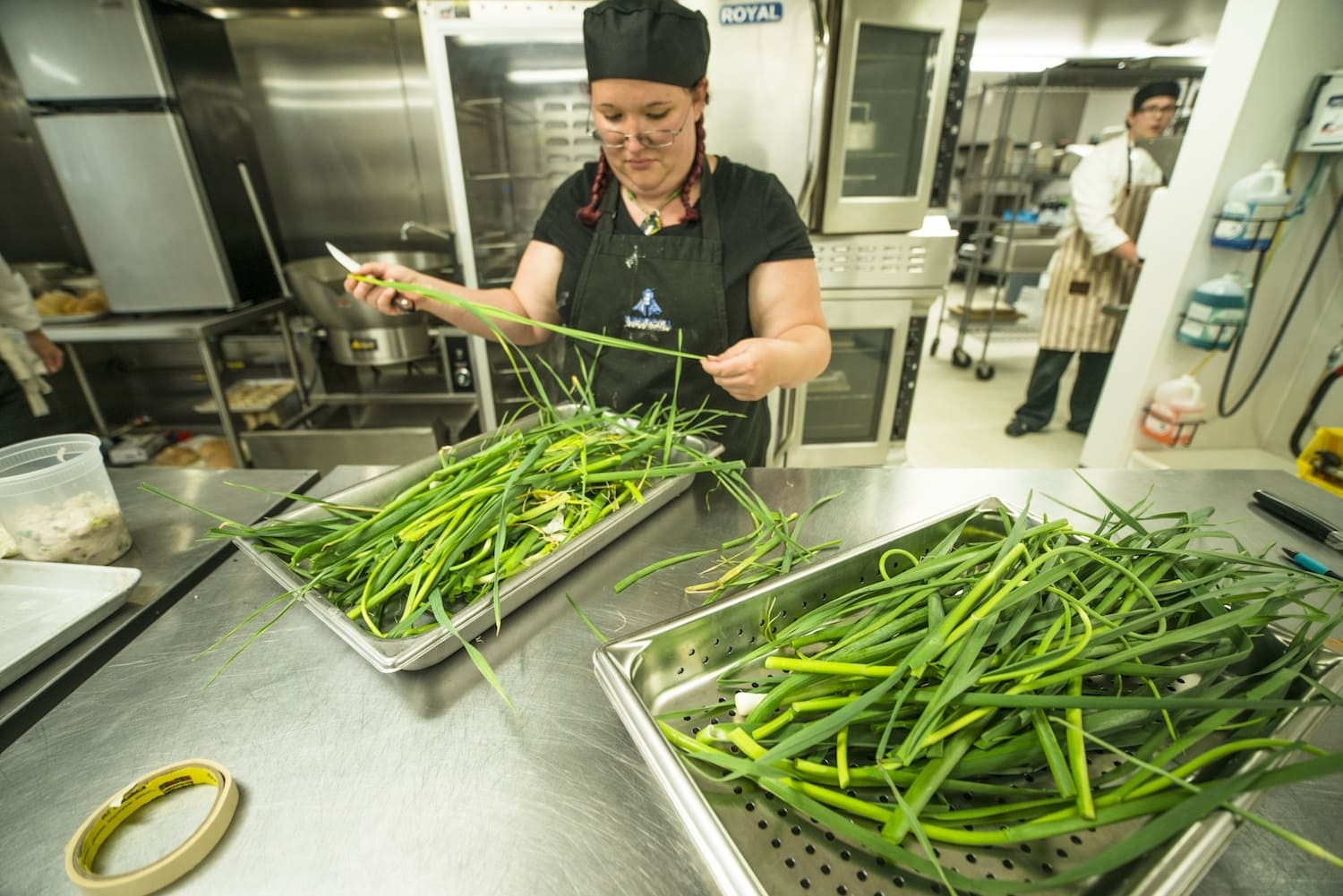 This buy-everything-first, figure-out-a-use-later approach encourages, even requires, Zach’s students to be extra creative.

“He lets us play, lets us experiment with things like this,” one student says, pointing to a pile of garlic scapes and spring onion greens she’s preparing for fermentation. When I ask what she might use it for, she pauses and gets a dreamy look on her face. “It’s going to have a savory and spicy taste, a sort of kimchee, so I could see this on top of a faro risotto in a few weeks’ time.” Here she closes her eyes and squints at something on the other side of her lids. “Topped with a strawberry-bacon jam.” Running a restaurant is often compared to captaining a ship, but how often does the nautical comparison also extend to the décor of the dining room? With its rustic wood walls, heavy wooden beams and view of Hessel Bay, the dining room in which the culinary students serve up final drafts of their latest homework could be the deck of a Spanish galleon. I sit down at my table as the room slowly fills with laughter, rattling of ice-cubes and a keen sense of expectation. Sipping a cocktail based on a rhubarb vodka made in-house and looking over the menu, it’s probably accurate to say I’ve never been quite so ready to eat.

The first dish, a salad of bitter greens and Johnny Jump-Up flowers, is full of color, creativity and, perhaps most important, connectivity: the flowers and pea tendrils come straight from the garden of the culinary school’s next door neighbor, Picklebelly Point, a gift shop owned by Les Cheneaux resident and author Bonnie Mikkelsen. With its bright colors, complex textures, and lingering aromatics, the salad sends a clear, appropriately maritime message to the senses: it’s all hands on deck tonight. The next dish, a whitefish cake, is Chef Zach’s regional answer to the classic Boston crab cake but also something more. Zach explains: “When I was undergoing chef training in Traverse City they didn’t touch on the subject of Great Lakes fish—despite the school being right on the lake. That didn’t feel right.” His fish cake is a rejoinder to and redemption of that unfortunate elision. A Jerusalem artichoke purée serves as the base for the dish, followed by a nest of wilted Indian spinach.

My first bite is a game of Twister on the tongue: the tender press of the savory, spicy, and aromatic fish; the subtle nuttiness of the beurre blanc; the salty crunch of the capers; the juicy bursts of pickled sweet corn. Words sometimes fail in expressing the deliciousness of food, but actions don’t, and for my second bite I pick up the biggest fork on the table and turn my chair so that no one can see me eat. The next dish, an au poivre bison let so tender you can almost spoon-slice it, comes from a ranch just a few miles north of the school. In this, as in all Chef Zach’s creations, there’s a care—and carefulness—to feature ingredients in their most flattering light. Here the peppercorns get an almost Zen-like treatment: “Usually with an au poivre, you’d first pepper the filet and then sear it,” Zach explains, “but we find that it adds an astringency to the pepper. So we simply salt the meat and butter baste it, and save the peppers for the sauce and garnish.” My first bite reveals Chef Zach’s instincts to be superb.

The three varieties of peppercorns form a subtle polyphony of heat tones, and they all have a different job to do. The bright vibrancy of green peppercorns enlivens the cognac crème sauce, while the earth-heat of the black peppercorns gives structure to the filet. And then there is the tart pop of the occasional pink peppercorns—there to keep all eaters on their toes with every bite. After a few bites I turn my attention to the raft of roasted asparagus, on top of which appears to be a mound of crumbled feta. But it’s too soft to be cheese.

“That’s thyme snow,” Zach clarifies. “We take maltodextrin and mix it with a thyme infused oil until it turns into a kind of a powder.”

I finish almost everything on my plate and then take a quick walk onto the patio to recuperate. In a different kind of perfect world I would take an hour—or a day—to prepare for the grand finale—a seared duck breast with wild rice pilaf, orange gel and spruce tip air—but today the show must go on. For strength of stomach I summon some of my inner Jim Harrison, quite possibly the greatest gourmand the North Country has ever seen. Back at my table, Chef Zach—and a particularly toothsome duck—are waiting.

“This duck is raised near the Soo by some Amish friends of ours, and the pilaf was cooked in a broth made from mushrooms foraged just a few miles from here. For the garnish we take foraged spruce tip juice, which is very acidic, and mix it with an alkaline component that creates these very stable bubbles.” It’s a perfect poem of land and lake, forest and fowl, but as I chew I note another tonality—something aromatic and smoky. This, it turns out, is an ash onion purée. In the same way Zach doesn’t waste any of the produce farmers bring him, he also doesn’t waste any heat energy generated from other cooking processes, especially when that heat comes from wood. “We smoke our bacon in-house, and once we take the meat out of the wood smoker, there are still a lot of coals going. So we throw whole green onions with their skins onto the embers overnight. Then the next morning we remove the burnt skins of the onion and purée the rest in the blender with a little bit of butter.” I’m too full for dessert, but after dinner service is over I enjoy an espresso with Zach at the bar. It’s dark by now, and night-hatching mayflies are resting on the opposite side of the window, shaped just like the sailboats bathing in moonlight out on the bay. The bugs are hexagenia limbata, the biggest mayflies of the year, and I rest easier knowing that the fish are also eating well tonight. Over a night cap, talk turns to the future of Les Cheneaux Culinary School, and I ask, given how successful the school has become, if there are plans to expand.

“We want to keep this particular program intimate,” Chef Zach replies, “with between 13 and 16 students. So I wouldn’t want to change anything about this facility. Rather I’d like to see the number of similar facilities in this area—and even other areas—grow.” Zach explains the type of compounding positive impact a place like this has on rural farming communities: “Having people like me, who will buy everything and anything, fights against monoculture in farming. Farmers have the freedom to grow more diverse crops, which is good for biodiversity, good for the soil. It’s a win for everything and everyone.”

The next morning, I leave my hotel with a spread of leftover boxes on the dashboard, bound for one of those beautiful “secret spots” that sometimes, but not always, lives up to billing. This one—a secluded beach that one of last night’s diners told me about—is just what it was promised to be. I lay brunch on a large boulder and look out over the water as the forest starts to come alive with bugs and birds. The shadows of cruising smallmouth bass appear and disappear beneath the shimmering sunlight of the bay, and I make note to bring a fly rod on my paddleboard later in the afternoon. I finish my morning coffee and then start to eat with my hands, scooping each box clean of its victuals before moving on to the next, like an otter with a feast of clams. A waft of wind brings the smell of sunbaked spruce out of the woods just as I’m biting into the spruce-air duck, and for a moment I can’t tell where the forest ends and my tongue begins. And maybe that’s the true beauty of a cuisine as local and thoughtful as Zach’s, that it shows us the connections between all the things around us: the forests and farms, the lakes and fields, even—here I nod in thanks to the nameless stranger who steered me to such a perfect brunch spot—each other. Les Cheneaux Culinary School admits up to 16 students per year. The program lasts one year and runs non-stop from September to September (the third Monday in September to the day after Labor Day). In addition to the constant tutelage of Chef Zach, students receive instruction from a host of visiting experts with specialties in everything from butchering to baking to chocolatiering. The application deadline
is September 1.

Dave Karczynski is a writer and photographer based out of Ann Arbor, Michigan. Reach him at dekarczynski@gmail.com.