That grain you see growing in the field? It’s going in the whiskey you see on the back bar. Welcome to Iron Fish Distillery, where spirits are as local as they can be.

This story is featured in the 2018 Food Issue. Get your copy of Traverse Magazine! 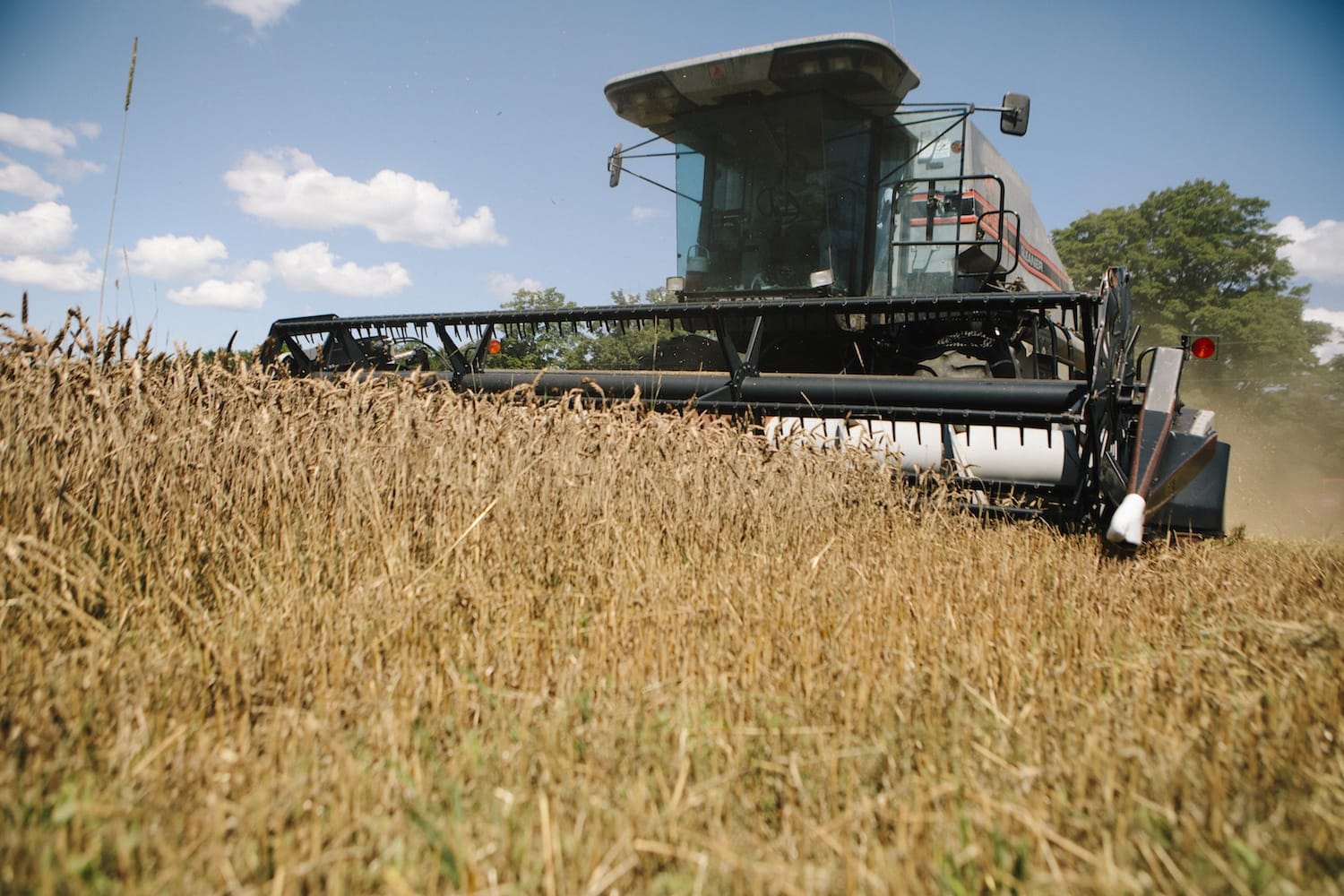 The hunt for Iron Fish Distillery can be complicated. Drive 33 miles southeast of Traverse City, past a half-dozen half-hidden lakes, miles of forests and remote Benzie County cabins and still, there are no hints that a sophisticated, modern distillery lies just ahead, down a gravel road–and barely beyond the Manistee county line.

Then a modest, well-tended farmhouse and several out-buildings appear. Next comes a massive barn that shows extensive updating.

Finally there’s a visual jolt when you spot a new, 5,000-square-foot building that sports a pair of massive, state-of-the-art copper stills, each of them 22 feet tall.

On the day of this visit, the sun shines. The temp is warm. Musicians are knocking out blues tunes on the patio. Small groups of adults sit side-by-side in Adirondack chairs and talk. Some sip cocktails. Children run around the yard.

All of this is part of the appeal. The family-friendly atmosphere shouldn’t come as a surprise. Iron Fish Distillery is after all a family enterprise, owned and run by Richard Anderson, his wife, Sarah Anderson, Sarah’s sister Heidi Bolger and Heidi’s husband, David Wallace.

Get to know them, and you realize that they also happen to be close friends. 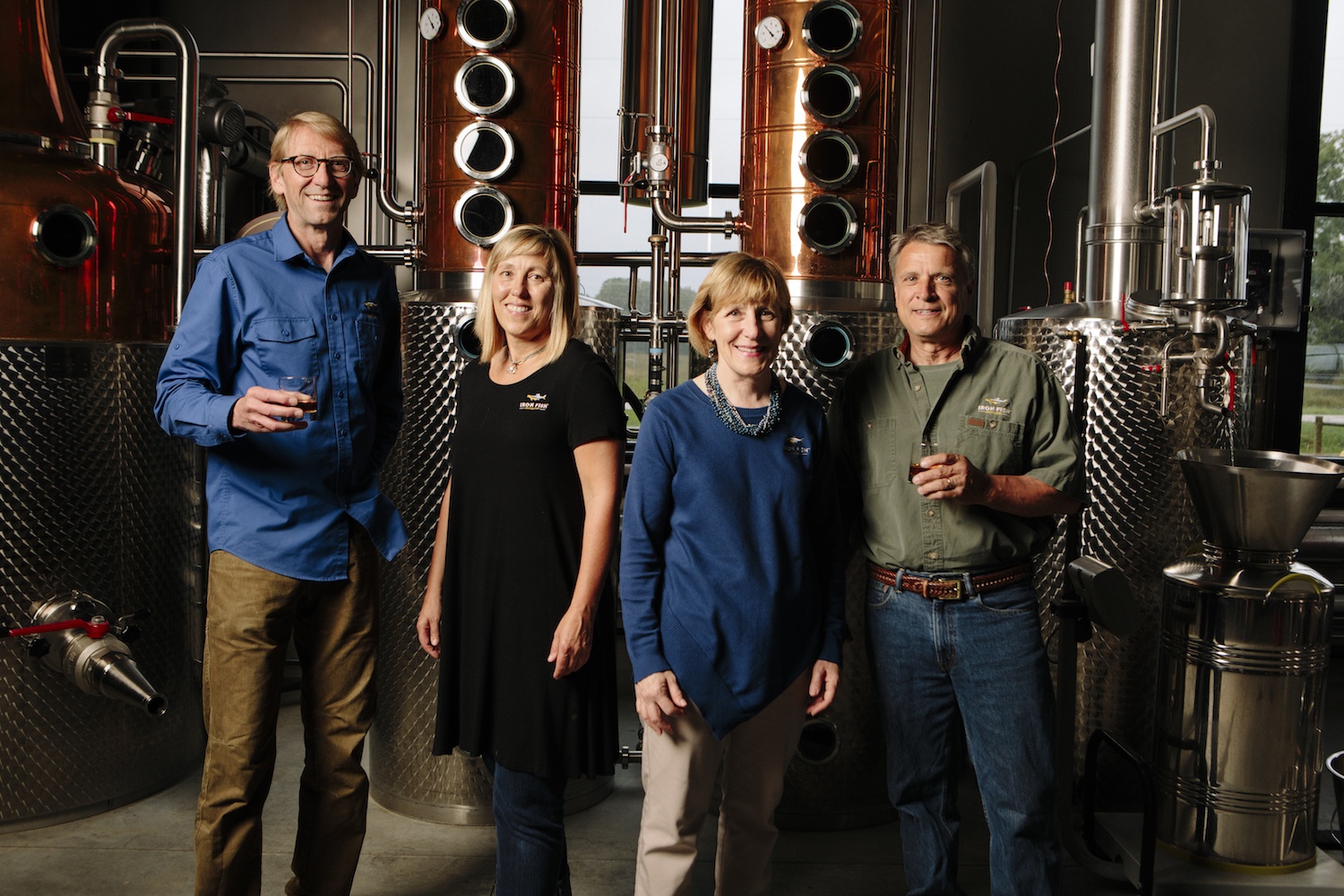 In the best possible way, Iron Fish’s remote locale and flat terrain remind me of an old saying about my home state, Kansas: “On Saturday morning, you can see your Sunday guests on their way.”

Dense woods surround Iron Fish, but mostly at a distance. Large fields and big, open skies dominate the landscape. I grow nostalgic watching a large combine harvest wheat right across the road from the distillery, and it’s pleasing to notice that beautiful, deeply green rye grows right up to the parking lot.

“There’s a bit of a hidden gem aspect to this place,” Richard says. “Sometimes people’s expectations are low when they drive down this dirt road the first time. This is an authentic experience. It’s about as real as it gets.”

It makes sense that one Iron Fish gin bears the name Slightly Lost. 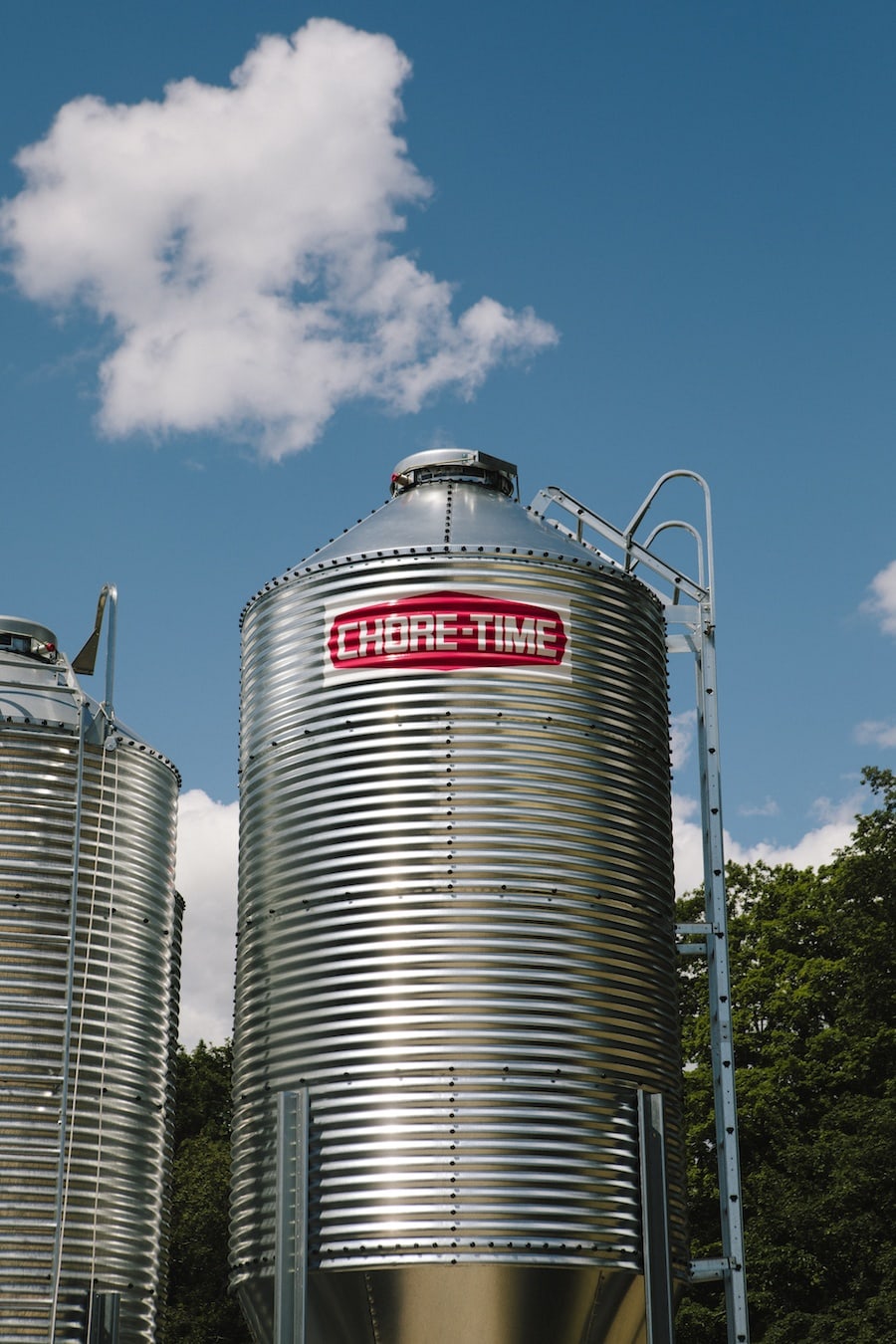 All that good vibe-setting aside, how Iron Fish performs its core business is also surprising and rare: it’s Michigan’s only farm-based distillery, or as Richard, who acts as my tour guide, is quick to point out, “At least we’re the state’s only legal farm distillery.”

The wheat being harvested today, and soon the rye that still bends in the afternoon wind, will form the basic ingredients for those beverages everyone is enjoying out on the patio. 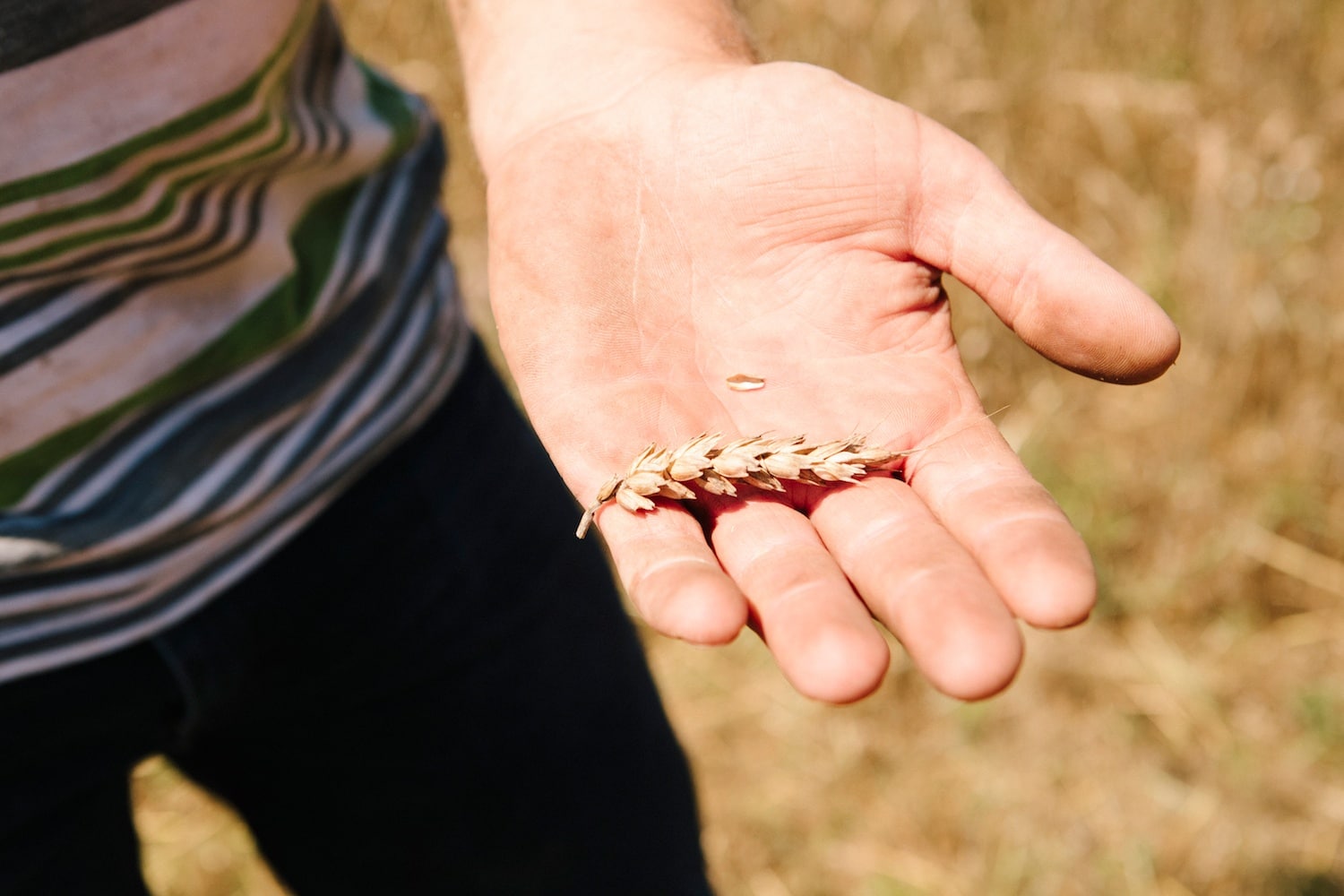 In a sense, Iron Fish is a surprise even to its owners, all four of whom have worked hard these past few years—and obviously invested a whole lot of money—to make this happen. The original idea was to turn the 120-acre farm, which was abandoned and run down, into a quiet retirement retreat for the close-knit, extended family. A spot to do a little gardening, maybe raise some hops and enjoy the nearby Betsie River.

“We laugh about it now,” Richard says. “We wanted a quiet little place.”

Before that could happen, though, a trip to Scotland’s venerable Kilchoman Distillery on the Isle of Islay changed everything.

“On the flight back, we said to ourselves, we can return this farm to production and use the grain to make whiskey,” Richard says. All four partners bought into the scheme and went to work. Plans started taking shape. The idea of laid-back “golden” years disappeared in a rush of excitement. 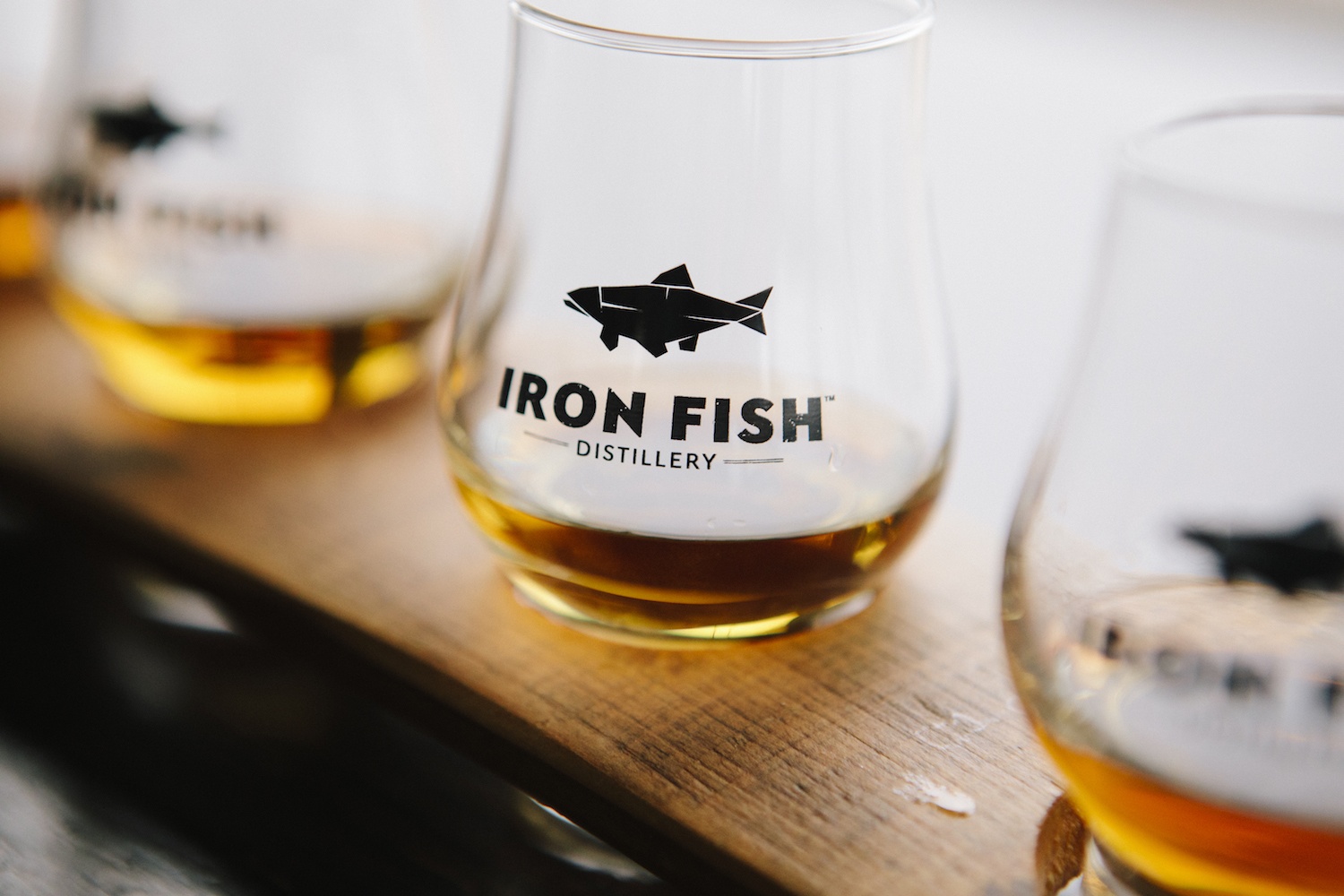 It would be wrong to think this was a romantic lark. Well, mostly wrong. There is a bit of dreaming to all this, as when Richard expands on his vision. “This might turn out to be like the farm distillery we visited in Scotland. It was almost like a monastery,” he says. “Maybe this could be a working farm for the next 300 years.”

At the same time, each of the four owners knows how to start a business and make it thrive. Richard was in economic development in the Upper Peninsula. Sarah is a consultant. Heidi is a CPA. And David is a veterinarian with his own practice in Saginaw.

Together, they developed a business plan that encompassed farming, marketing, distilling, managing employees, distributing the finished products around the state and creating a welcoming atmosphere for customers. What they didn’t know, they learned from others. 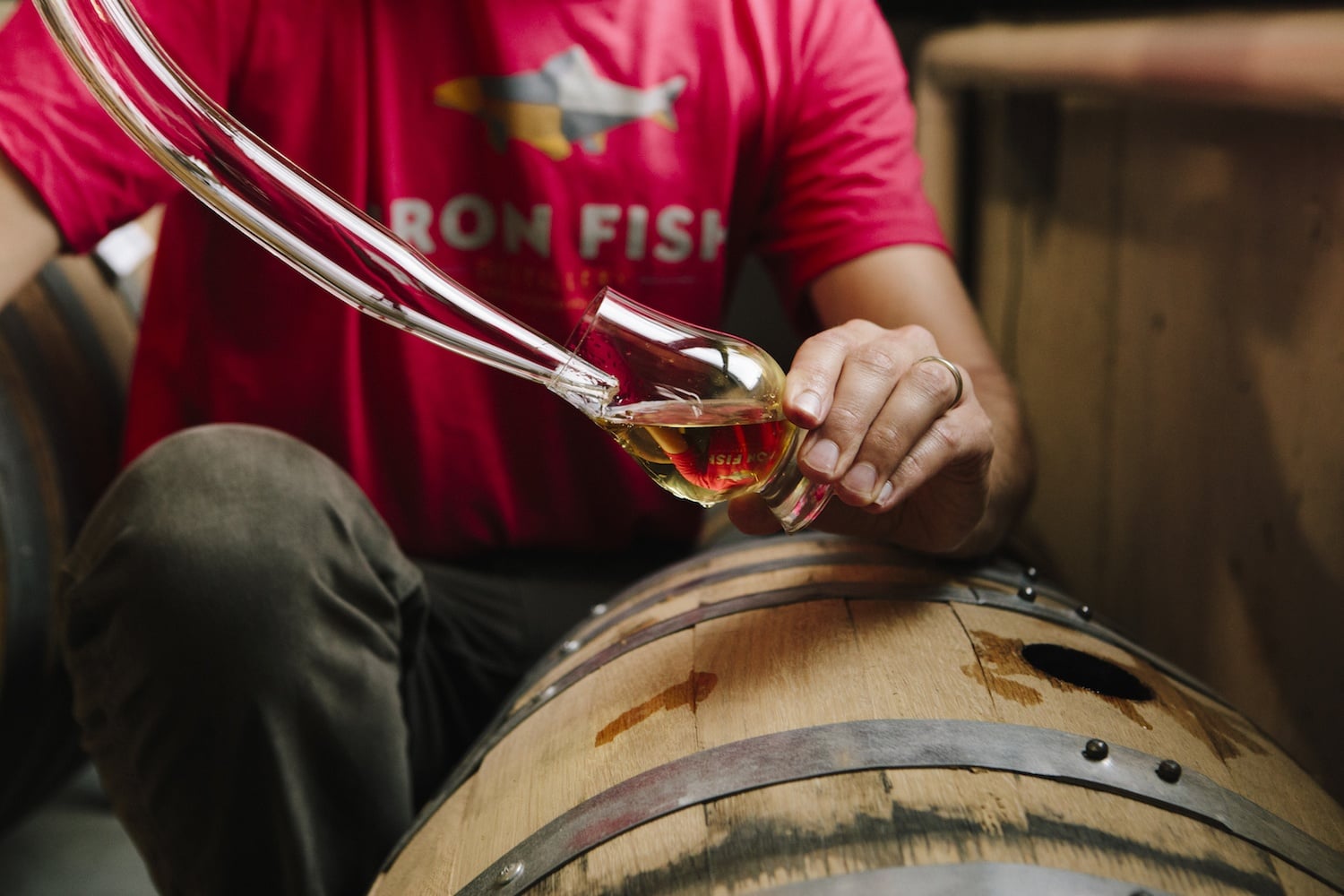 But first came the monumental job of fixing up the farm-house and barn and the slow process of bringing back into production fields that had been idle for at least 15 years—all tasks that might have overwhelmed many a startup venture.

“We took 10 tons of moldy hay out of the barn,” Sarah says. “We used tarps. There was no other way.”

Today the barn, now cleared out and structurally reinforced, serves as a venue for weddings and other special events. The farmhouse, which was nearly in tear-down-and-start-over condition, is now fully remodeled and rented to guests. And the once-forgotten fields are well kept and productive. 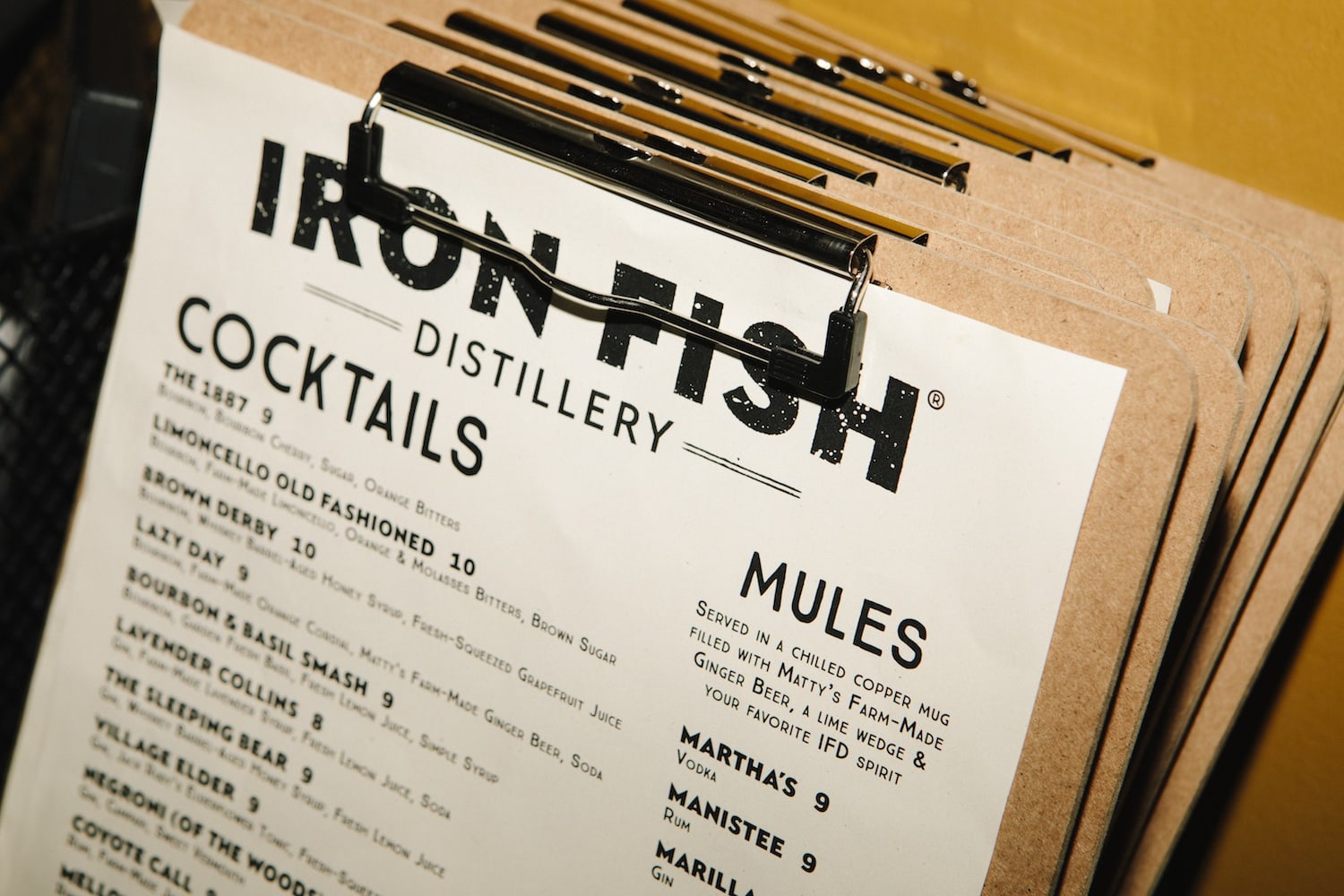 “In the beginning, only one visitor to Iron Fish in about 20 said we’re smart to do this,” admits David. “But we’re starting to hear more and more that they’re happy we did this. They’re moving from incredulous to thanking us.”

Dig a little deeper, and you begin to understand why this ambitious, multi-layered experiment works. I think it’s because Sarah, Heidi, Richard and David use their heads and their hearts.

“We make data-driven decisions about things that affect the budget,” Sarah says. “That’s why we’re able to move through decision-making pretty rapidly.”

David agrees, but adds another dimension—one that speaks more to the heart. “Anything about the business that might get in the way of the family, we’re not going to do it. Family comes first.”

Listen to Lick the Plate, a podcast for people who love to eat and drink in Northern Michigan. 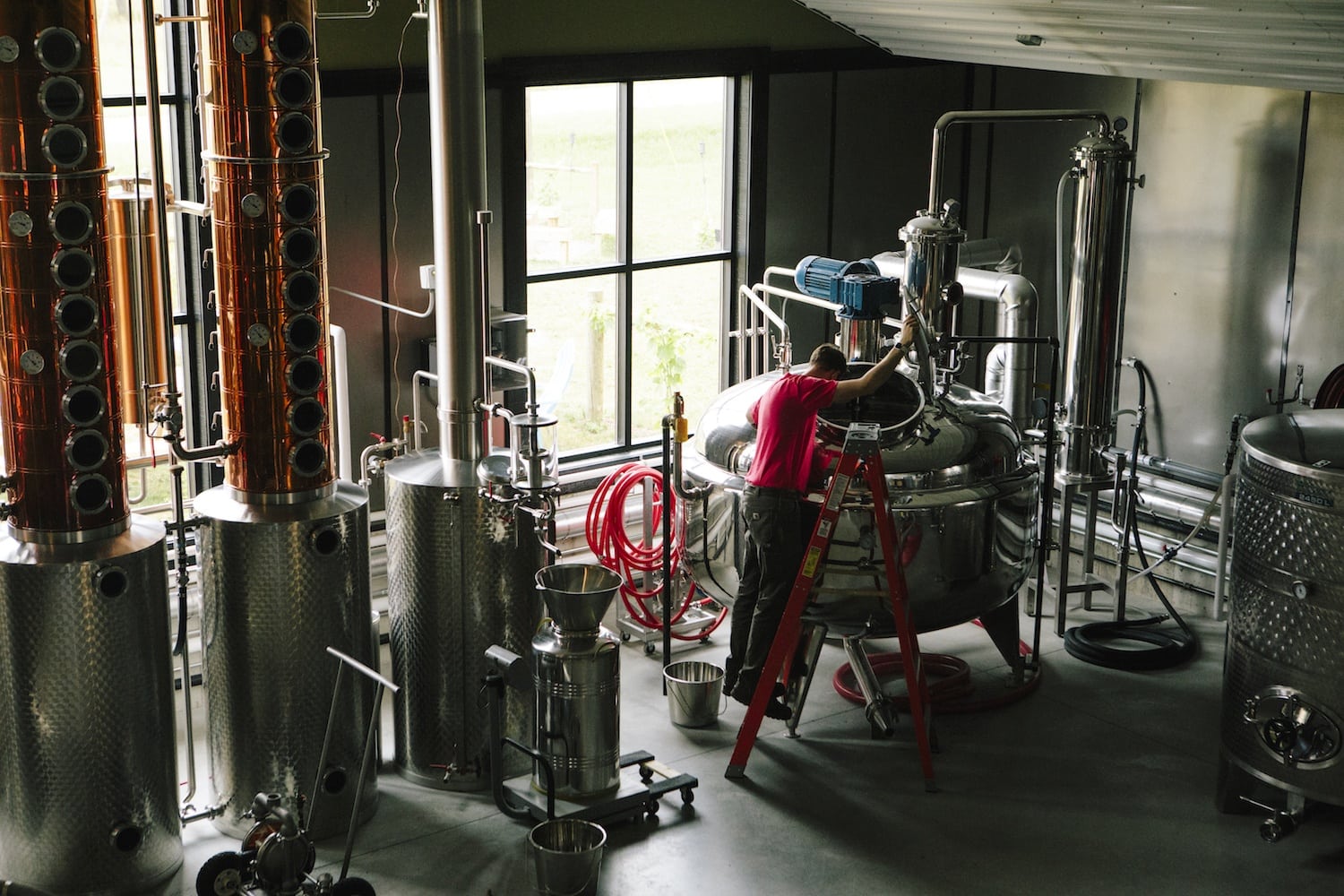 Iron Fish follows the five steps of traditional whiskey making: malting, mashing, fermentation, distillation and maturation. “The only one of those steps we don’t do here is malting,” Richard says. “That’s done at a malt house. In our case that’s at Great Lakes Malting Company in Traverse City.”

Wheat vodka, gin, rum, and a couple of finished bourbon whiskeys are for sale at the distillery and at retail sites, cocktail bars and several Michigan restaurants. Estate whiskey is still aging. “We have a lot of whiskey going into barrels that will be sitting there for years,” David says.

For all the precision and planning, there’s one step during the aging process that no one can control—the “angel’s share,” a nifty term for the 2 percent or so of barreled whiskey that is lost each year to evaporation. 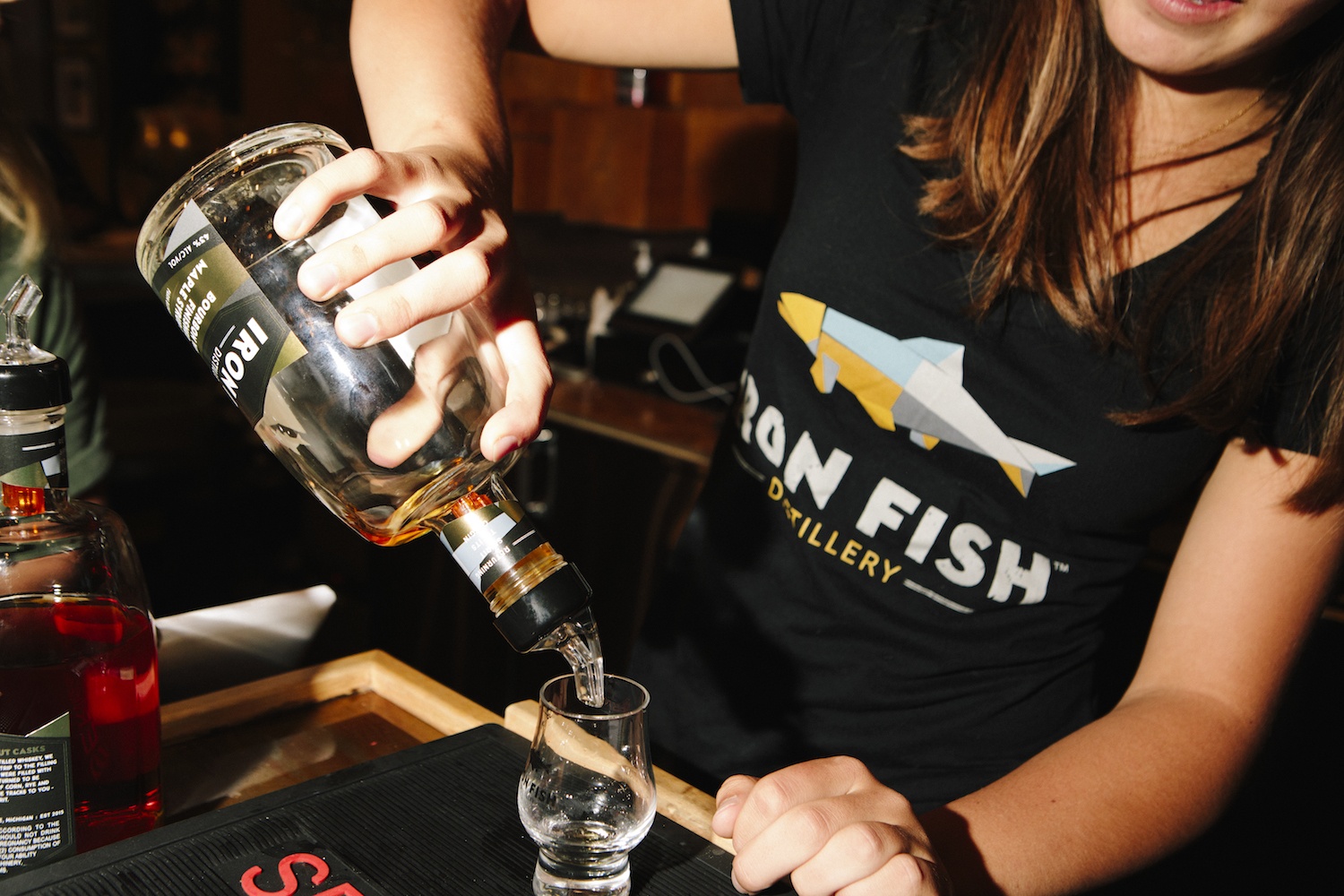 Despite, or maybe, because of its location, Iron Fish is becoming a destination. Many first-time visitors become steady customers. In winter, a woman who owns a condo at Crystal Mountain skis to the distillery once a week to meet friends. There are plenty of guests representing the older generation, but an energetic, 20-something wait-staff also helps attract a younger demographic.

The limited, on-site food service is currently augmented by visits from a popular local food truck. But that’s about to change. The addition of a new 5,000-square-foot building will free up space for a large wood-fired oven and allow for an expanded menu that will include pizzas and other dishes made with locally grown ingredients.

“Build it and they will come,” is an adage come to life at Iron Fish. And once they get there, most visitors like the experience. “They’re interested in the open, working landscape. It’s not manicured like in a vineyard,” Richard says. “These days, not a lot of people have spent time on a farm.” 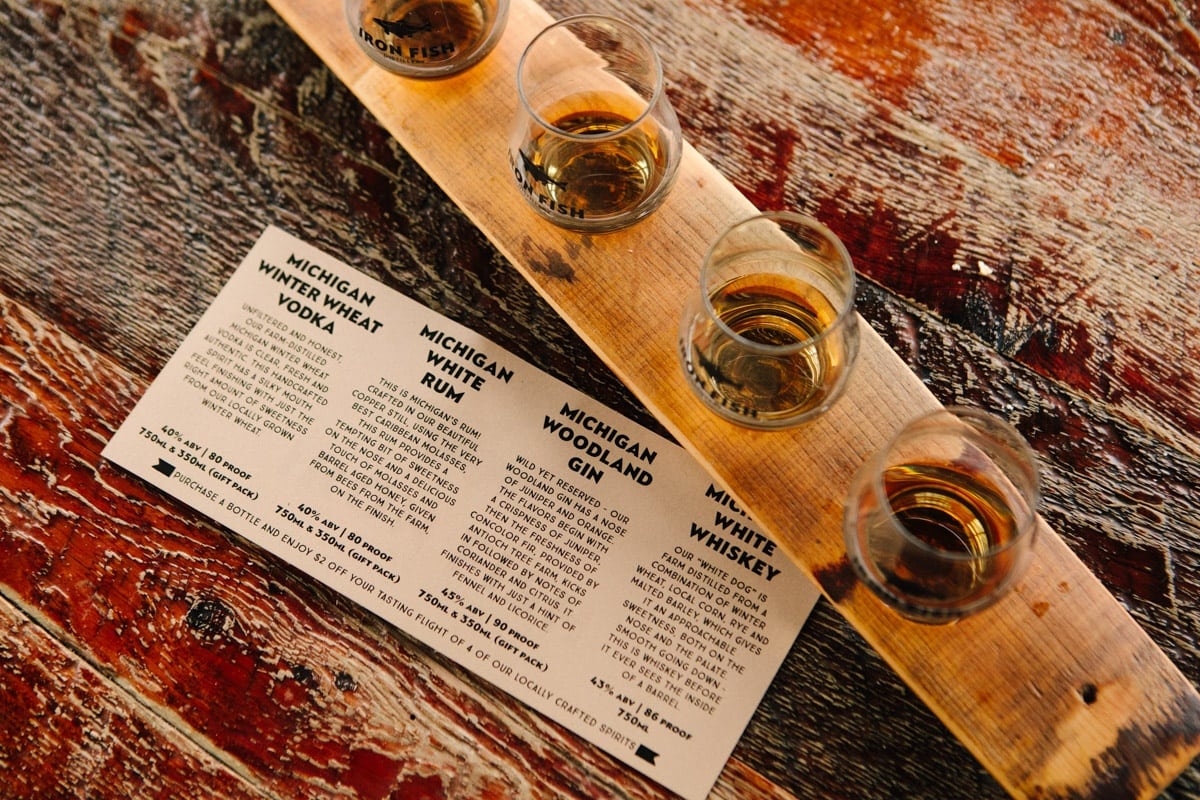 At its roots, the entire undertaking is a return to a time when distilling was considered a part of many farms. Then whiskey-making became a corporate venture and Prohibition (1920 to 1933) took its toll. In earlier days, homemade whiskey could be used for bartering (and, of course, drinking).

In fact, this very farm once had its own working still. (Some original distilling equipment remains.)

Evidence of that interrupted history shows up in a photo that hangs in the tasting room. It shows Wexford County Sheriff Charles H. Nixon proudly displaying some 80 stills he and his deputies confiscated from area farms.

“We always joke and ask, ‘how did that guy get re-elected?’” Richard says. “At that time, there must have been more people distilling than in the church pews.” 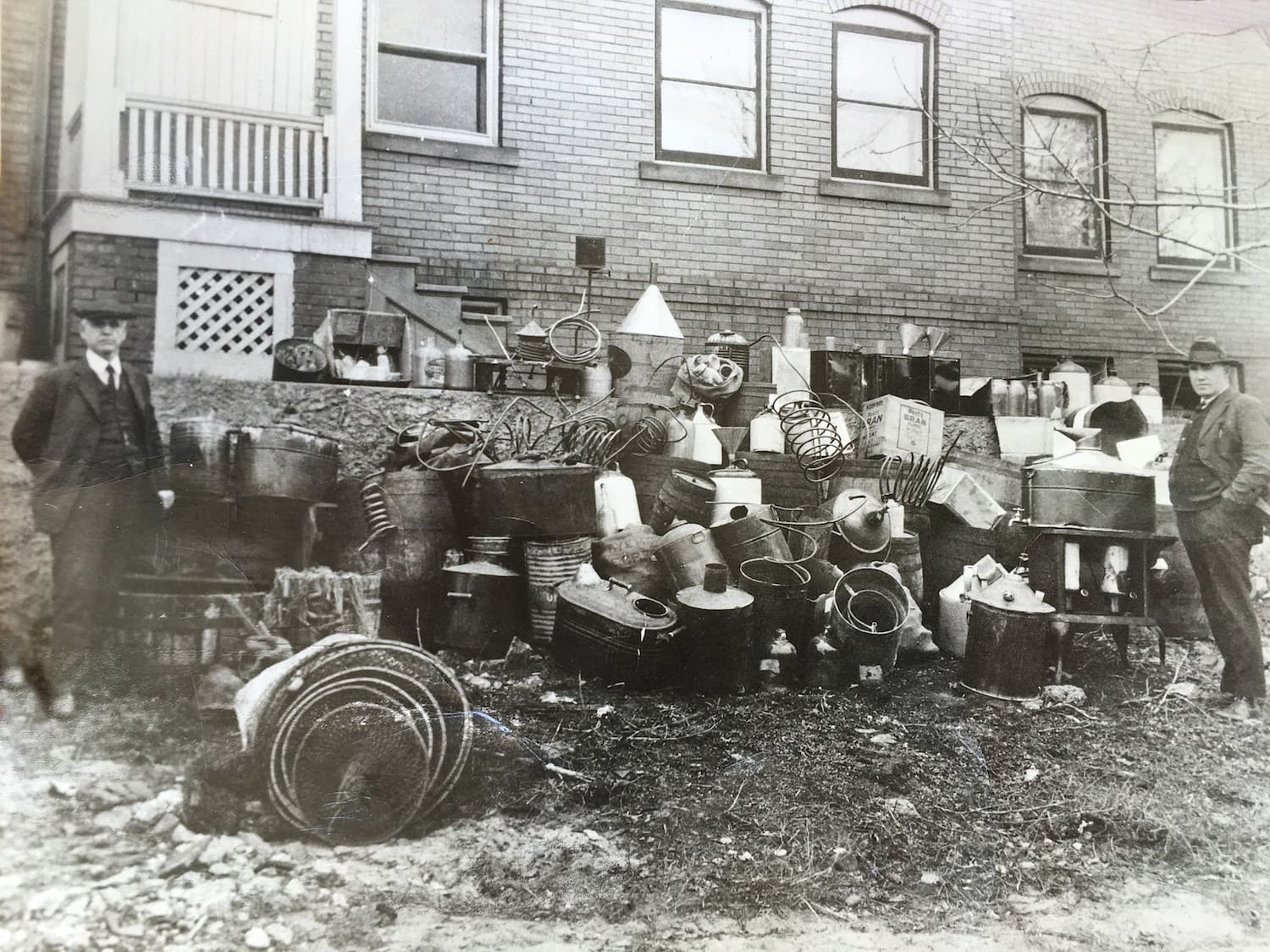 All the owners of Iron Fish have a clear sense that they are, in a way, recreating the past. They also believe there is a bright future in this business.

“We’re just at the beginning of where the state’s craft brewing movement was 15 years ago,” says Richard, who also thinks the growth of craft distilling can widen the local market for Michigan-grown grains.

“What we’re doing is returning spirits to their origins by controlling everything from soil to finished product,” Richard says. “We’re all about bringing flavor back to spirits. And visitors seem to pick up on the passion we have for the next phase of our lives, and find it inspiring.”

As he looks over the wheat field and a patio full of guests on a warm summer’s day, Richard grows reflective. “For us, the work here is never done, but the enjoyment isn’t either.”

Honey Syrup
Heat equal parts honey and water in a saucepan until the honey melts into the water. Cap and store in the fridge.