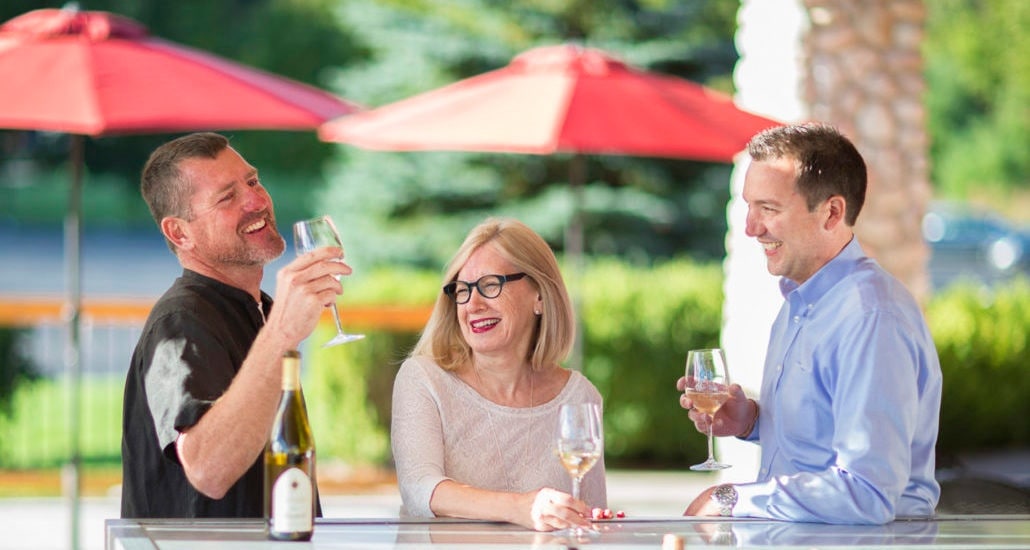 Black Star Farms is a working farm, a B&B, a restaurant, and a distillery. Perhaps most notably, it’s a winery with several awards to its name. That includes six medals at the recent American Fine Wine Competition.

Yet that wasn’t always in the cards for the one-time dressage facility. It was the brainchild of a chemical engineer who became a wine enthusiast almost by accident. “Starting a winery wasn’t on my bucket list,” admits Kerm Campbell, the owner and original visionary of Black Star Farms. 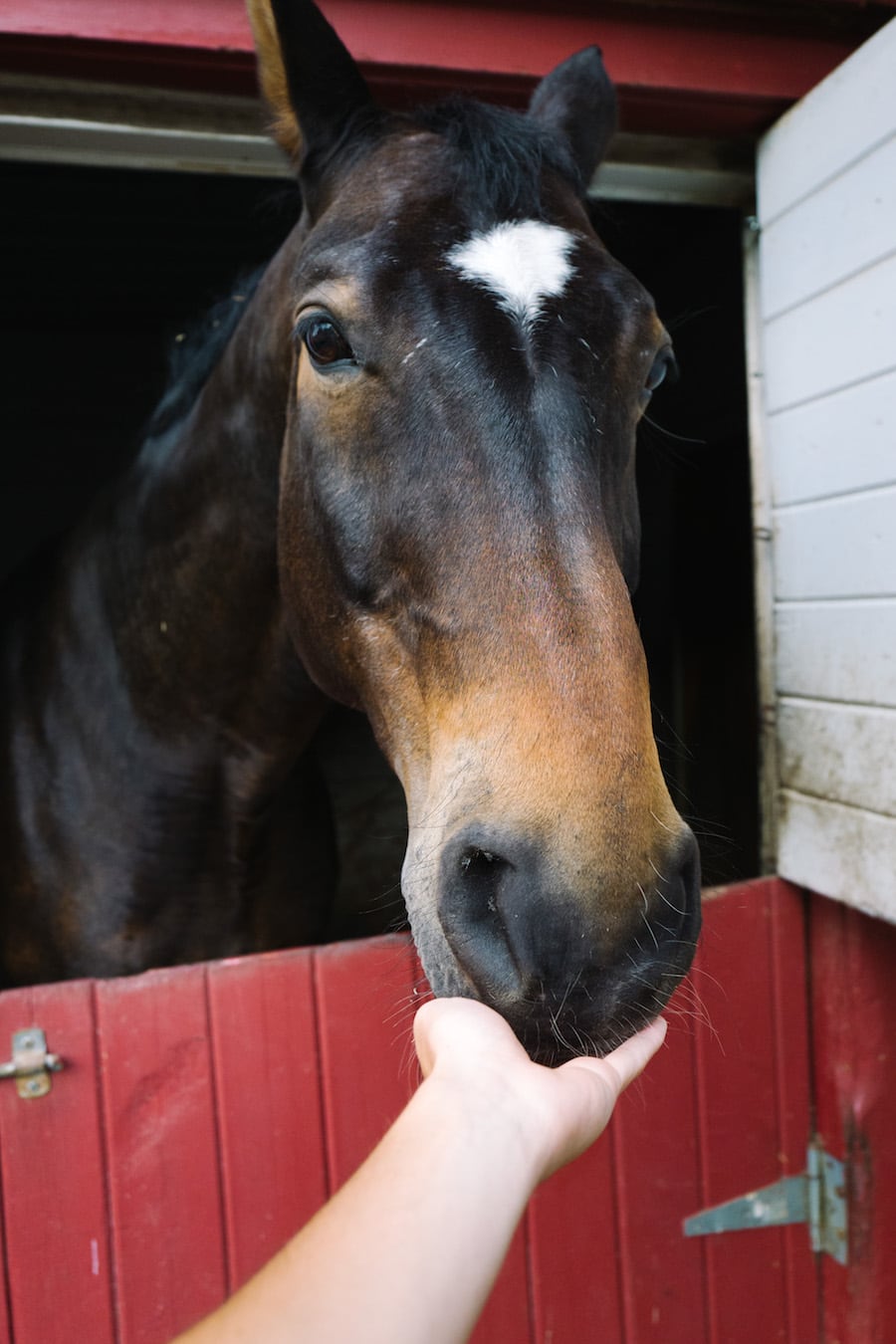 The Stables at Black Star Farms

“I grew up on a wheat and cattle farm in Kansas. I’ve still got dirt under my fingernails,” he says. After graduating high school, Campbell opted to study chemical engineering at the University of Kansas. It was a tough decision to make, he says, but not because he wanted to return to farm life. “I’m an operatic tenor and I had to decide between music and chemical engineering,” he says.

Campbell is happy with the choice he made. While he has been able to sing in various settings over the years, his decision to study chemical engineering led him from Kansas to Dow Chemical in Midland. One of his early assignments found him relocating to Europe, first to Wales, then to Brussels, Belgium, the European headquarters for Dow.

Brussels is centrally located in Europe, and most importantly, is just an hour and a half from the wine regions of both Germany and France. “I got hooked on fine wines,” Campbell says. “In four years there I became a reasonable wine connoisseur.”

When Campbell returned to Midland, much to his surprise he found a nascent wine industry in the state. “I discovered while I was gone the wine industry had sprung up around Traverse City,” he says. He and his family felt the lure of the north and bought a home outside Harbor Springs before deciding they really wanted to be closer to Traverse City. 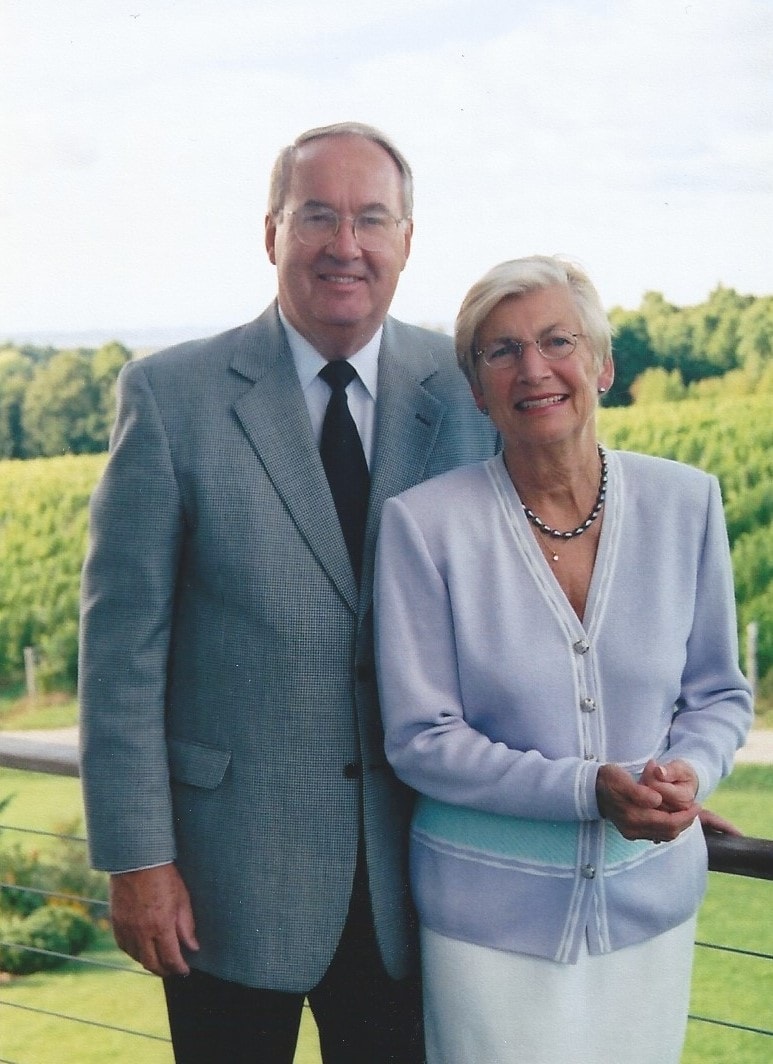 Campbell and his wife Sallie were driving around Old Mission Peninsula and found a parcel of vacant land surrounded by vines. “I said, ‘That may be the best spot on the planet to build a home.’” It took four years from that first sighting in 1987 to purchase the land, including 10 acres of grapes (which he leased back to the growers), and another six years before they moved into their new home.

All that was a preamble to Black Star Farms. They were living on Old Mission Peninsula when the property outside Suttons Bay came on the market. When he saw it, he immediately fell in love, and he wasted no time in sharing his vision. “It was so stunning—120 acres. I could see the future by looking at what was there. I immediately thought it was perfect for a winery. The 13,000-square-foot home could be an inn.” The Campbells brought in three other couples and signed the papers March 31 of 1998.

By then Campbell had already hired winemaker Lee Lutes, and the two of them started ordering equipment that summer. They bought 100 tons of grapes from a local farm, and by October of that year, they were in the wine business. “It went so fast, it was meant to be,” Campbell says. 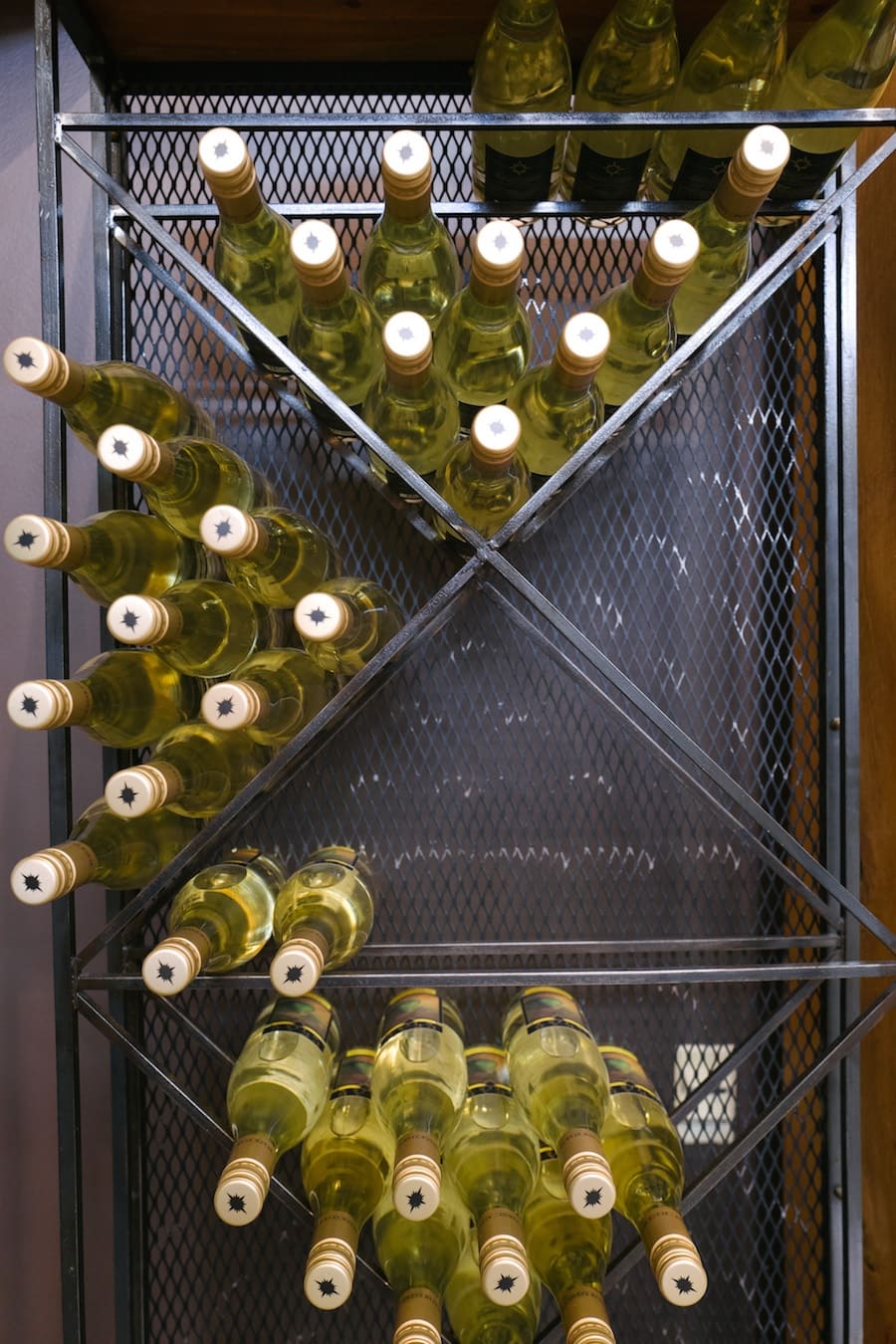 Pear and its Spirit (See how they get a whole pear in the bottle!)

Since then, he bought out the other partners, the last in 2015 when Don Coe decided to retire. Today, as Black Star Farms celebrates 20 years of winemaking, Campbell’s vision is just as fresh as when he first saw the paddocks and imagined them being turned into terraces for grapes, similar to what he saw from the Rhine River. “It really recalls being in Germany, seeing the grapes growing on the hillside. I just love what we’re doing.”

He even sees the possibility that one day this region could challenge those European locales. “What we have they don’t is we are downwind from 100 miles of fresh water. The most important thing is the effect of the lake during summer. The temperature drops when the sun goes down. That’s what grapes love, especially white. They rest overnight.”

Then he makes this bold pronouncement: “Twenty-five years from now our white wines will be known as some of the very best in the world.”

As for red wines, Campbell and his crew believe a half-million dollar investment will help them compete on the world stage as well. Red wine grapes take longer to completely ripen than white grapes. And in this region, where the growing season can be shortened by late spring or early fall frosts, growers are sometimes forced to harvest before the grapes are at their peak.

Lutes points to summer 2017 as an example of the difficulty of growing red wine grapes. “We would have been struggling without September to get reds,” he says in reference to last September’s 80- and 90-degree temperatures.

Campbell agrees. “Cabernet Franc grows beautifully here but takes a long time. It may not ripen in some summers.” 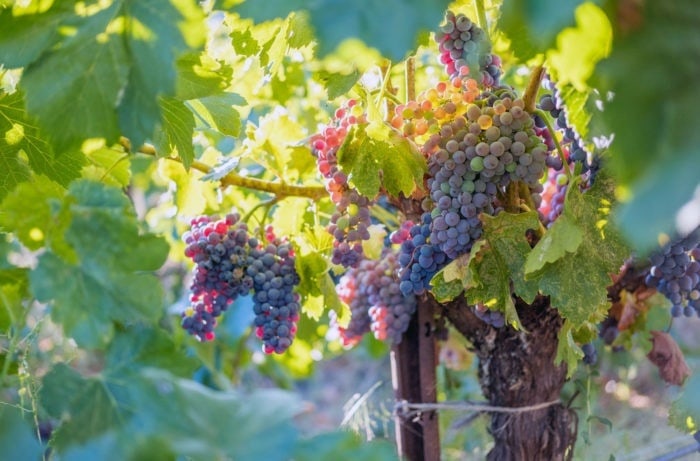 That’s where the Flash Détente comes in. Thanks to a grant from the Michigan Department of Agriculture and Rural Development, which paid for about half the cost, and Campbell’s willingness to complete the investment, including constructing a building to house the machinery, Black Star Farms became the first winery in the Midwest to purchase a Flash Détente. The grapes are heated to 175-185 degrees, then pumped into a vacuum chamber where the grape skin is ruptured. The process eliminates undesirable characteristics such as harsh tannins often associated with under-ripeness, and as a bonus, it provides richer color.

Lutes says it will help Black Star Farms and winemakers throughout the region, as the technology is being shared with others. St. Julian Winery from Paw Paw processed some of its grapes through the Flash Détente last year. 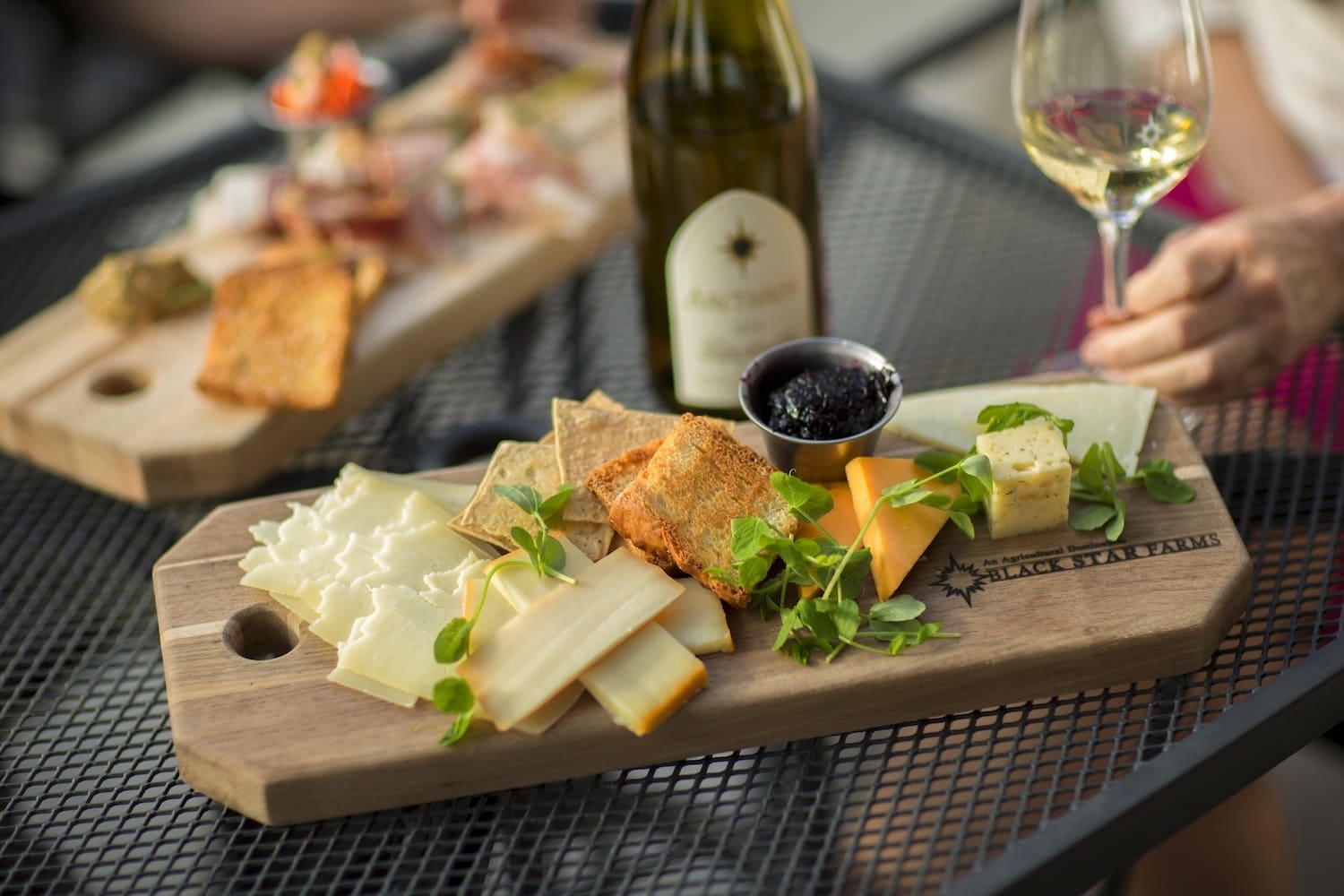 In addition to wine tastings, Black Star Farms offers wines by the glass or half glass and a wine-friendly menu on the terrace patio.

Over the past 20 years, the farm’s offerings have expanded past the point Campbell originally envisioned. The restaurant uses many of its own products for its farm-to-table cuisine, and both the centennial barn and the vineyards host events such as weddings. Its Old Mission location has also flourished and is celebrating its 10th year.

Campbell takes it all in, from first seeing the property on Old Mission Peninsula to turning paddocks into terraces in Suttons Bay and purchasing the latest technology in the Flash Détente. “I believe that unique combination of science and art helps me with wine and growing grapes,” he says.