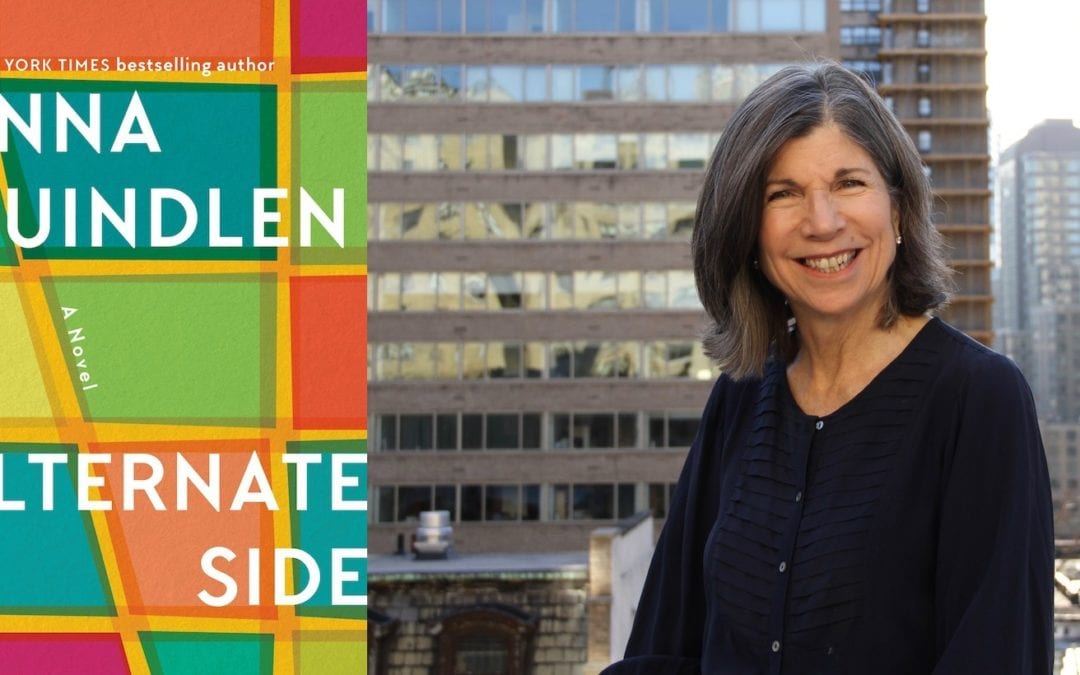 Pulitzer Prize-winning and #1 New York Times bestselling author Anna Quindlen will take the stage at the City Opera House in Traverse City on Sunday, March 25. Here’s a sneak preview of what she’ll talk about! The email interview is written up by Cynthia Canty, host of the Stateside, a Michigan Radio program heard throughout the state on NPR affiliate stations. Cynthia is the guest host for the night, and we can’t wait to meet her too! —Anne Stanton

Anna’s new book is included with each ticket package.
For ticket pricing information, go to www.nationalwritersseries.org.
Order at 231-941-8082, ext. 201

“If you know yourself to be a storyteller, then you will seek out a form and a forum. It will not be easy, and it will not pay well. It never really has. But the people in the audiences in Traverse City alone attest to the human need for storytelling.” —Anna Quindlen

Cynthia: Anna, you’ve said in the past that you always begin a novel with a theme. What was your theme for Alternate Side as you began writing it?

Anna: My elder son was reading Bonfire of the Vanities” several years ago, and it occurred to us both that there was more to be said about class and race in the cauldron of New York City and that Tom Wolfe’s novel had a very male perspective, and perhaps a female one would be illuminating. So I decided to write a novel about class and race, and what it wound up being was a novel about marriage. You never really know what the books are about until they’re almost done.

Your central characters Nora and Charlie Nolan have a long marriage, with two kids in college. As you developed and wrote their story, did you see yourself in Nora? How would you describe her?

I like Nora, unlike some of the other women who have inhabited my books. I could certainly see having her as a friend.  But I think we are quite different. The lack of ambition, the diffidence, a kind of go-along-to-get-along quality she has: I don’t have any of that. The main thing we share is our overweening love of New York.

Cynthia: You have Nora saying and thinking things that are so true and relatable. Things that seem to be drawn from real life. Do family and friends ever say to you, “Don’t use this in a book!”?  Do you have a firewall between your personal life and the people in it, and your writing?

Anna: I developed a kind of firewall many years ago when I was writing a column about my personal life for the New York Times called “Life in the 30s.” My two boys were very young, and I was always conscious of not writing anything that would mortify them when they were older. I think I got pretty good at gaming that, at using only that material that was truly illuminating and not what was merely revelatory.

One of the responses I get to my work all the time is, “You must have been eavesdropping on my life.”  But I think that’s because most of what happens to us has a kind of universality.  On the one hand, people will look at the daughter in a novel like Every Last One and say, oh, Ruby is just like my daughter. And then they assume she must be just like my daughter. And the truth is she’s everybody’s daughter. The great thing about reading is that you find yourself in a book and discover how much we all have in common.

Cynthia: New York City is a vivid character in Alternate Side. You give us an insider’s take on the rewards and struggles of living in New York City. Through Nora and Charlie, we see the tensions between one partner wanting to stay in NYC, no matter what, and the other partner dreaming of moving out and building a different life. Have you gone through periods of ambivalence about living in Manhattan? Do you ever imagine living in a place, say, like Traverse City and northern Michigan? Or has New York City won your heart?

Anna: I have less ambivalence about New York than about anything except my kids and chocolate. I do live part of the time somewhere else, in a rural part of Pennsylvania. I’m there all summer and most weekends, and I like it very much. But I am a New Yorker. I wear the T-shirt. When my ashes get scattered, it will be in the Hudson River.

Cynthia: You spent decades as a reporter and columnist: you were the one asking the questions. How did you adjust to being on the other side of the equation, being interviewed and questioned about your writing, about your views?

Anna: It never stops being peculiar to me. The wrong side of the notebook: that’s how I see it. On the other hand, it means I meet lots of reporters, and since reporters tend to be my favorite people on earth, that’s a good thing.

Cynthia: Alternate Side is your ninth novel. How do you think you have evolved as a storyteller and writer since your first novel Object Lessons in 1991?

Writing is all about confidence. You start out thinking it’s about stringing sentences together, but those are just the bricks. The grout is all about believing you have something distinct to say and that people should listen to you despite that nasty little interior voice that whispers boring, pedestrian, not as good as your last one. I am more confident in my work as a fiction writer than I was starting out, when there was not only that interior voice but various public ones suggesting that a reporter who thought she could be a novelist didn’t know her limits or her place. I’m more comfortable playing with point of view, style, form. I try to challenge myself on each new book, and while I still find that frightening, I push the limits more convincingly than I once did.

Cynthia: What do you think you are able to say and do in your novels that you could not in your newspaper writing?

Anna: Bigger canvas. Simple as that. Its why In Cold Blood does something different than the magazine piece about the Clutter murders and the magazine piece did something different than the newspaper stories. I had a lot of leeway in the newspaper business to be inventive because of the time in which I was working, a time of transition in which journalism was embracing more literary techniques. But 80,000 words can do something that 800 simply can’t manage no matter how deftly it’s done.

Cynthia: How do you view the National Writers Series in terms of its importance in supporting writers and publishing?

When I was a kid I wanted to be a novelist. But all the novelists I admired were English and dead. There was zero template. So all the opportunities for writers to meet readers and vice versa seem to me to be blessed events. I was doing an event last year and this young woman got up and was stuttering and stammering about thinking about and wanting to and trying to be. Finally I stopped her and said, “You need to say the words: I am a writer.”  And it took a moment, and then she said it, and it was as though she expanded. That’s the kind of exchange, overtly or covertly, that mainly takes place in venues like the one in Traverse City.

Cynthia: Along with giving established and prominent writers like you a way to showcase your work before an audience, the National Writers Series nurtures the next generation of writers. Its Front Street Writers program gives students from northern Michigan a place to develop their writing skills and get published in the NWS Literary Journal. Yet we live in an era when newspapers are closing or cutting staff; the same is happening with magazines. What kind of future do you see for young people who are drawn to writing, especially journalism?

Anna: Look, journalism and fiction writing are about nothing more or less than telling the stories of our lives, whether it’s what’s happening in Washington or what’s happening in our hearts and minds. Humans have been doing that since they gathered around the fire in caves or scraped lines onto clay tablets. The form changes, but the impulse, and the effect, stay the same. If you know yourself to be a storyteller, then you will seek out a form and a forum. It will not be easy, and it will not pay well. It never really has. But the people in the audiences in Traverse City alone attest to the human need for storytelling.

Cynthia: What are you most looking forward to in your upcoming visit to Traverse City and the National Writers Series?

Anna: I have to admit, the first time I was invited here, I said, “Where?” Now I can’t wait to return.  he place is warm and welcoming, and so is the audience. You look out and see all those eager readers and think, despite appearances to the contrary, things will be okay.