The Forest Floor, an Essay by Kandace Chapple 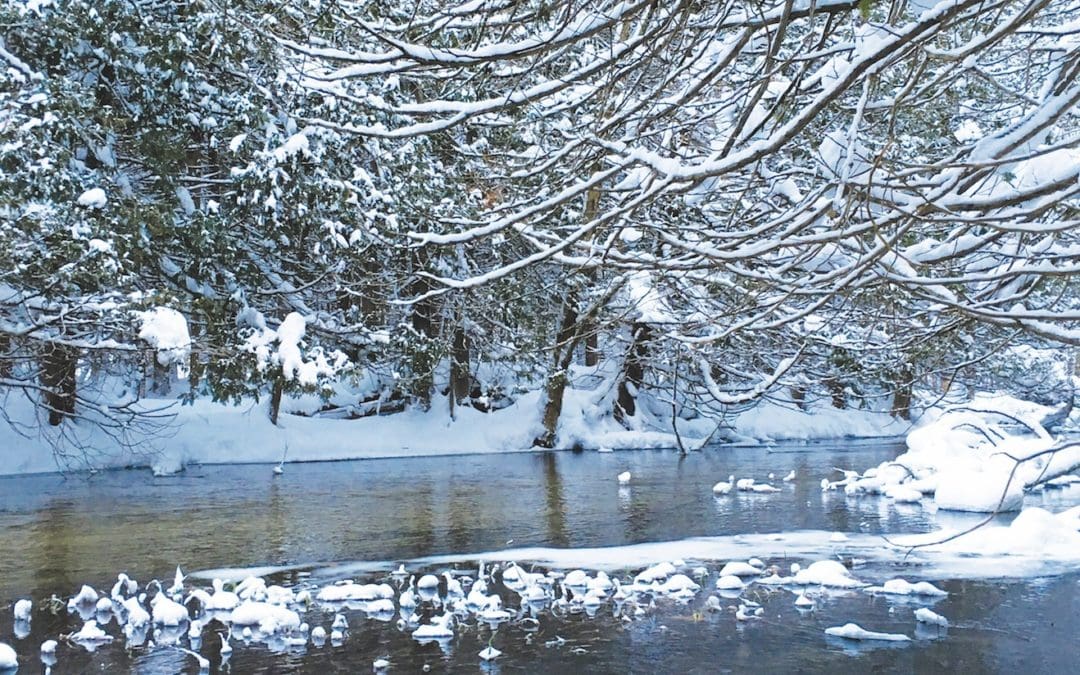 I strapped on my snowshoes. The snow base was over two feet deep, and last night’s snowfall had put a fresh six inches of light snow on top. Perfect snowshoeing conditions.

Dawn arrived with no clouds. I was at the trailhead as soon as the boys were dropped off at school. I had spent the last month off my right foot, an injury keeping me from the best of winter.

I was the first on the trail. The loop I always took went up and around two lakes, ponds really, over several hills and cut through forest that went for miles more. The Platte River snaked down the south loop of the trail, my favorite part.

I had the trail memorized and started toward the river, happy to be back out, walking with care on my right foot. But in just a few steps, I noticed the white blanket that lay throughout the trees. The trees were gray pencils stuck in white paper. Mostly maples and elms. A handful of evergreens shot up here and there, but for the most part the scene was an endless white and gray pattern.

I entered the unbroken snow and found I could stay on top. The sun was so pure and bright that the snow was blinding. But I didn’t care. It was February; the sun’s return welcomed, worshipped.

I could go anywhere. I didn’t have to scramble across deadfalls or trip over roots. I was freed of all the disorder of a forest floor. What a joy!

I took off, wound through the trees and idled where views went forever. I looked for things I couldn’t see in the summer. For a forest in hibernation, there was plenty.

I came across a deer run and stayed parallel to it. I found where the deer ducked through a small stand of pines and so I did too. Where they jumped a fallen tree, I stepped atop. I traced their path from the river to the lake, marveling at a thoroughfare kept open year round, that I’d never seen in the summer.

Next, I found a small spot where something had bedded down. In the melted circle I saw blood. Whatever had lain there was wounded. I must have startled it and knelt to identify the tracks. It was too small for a coyote, too big for any rodent. I looked around and all was still. I felt sad and waited, quiet, to see if the fox would reveal itself.

Last summer, I had come across two red foxes playing. They were babies. I had walked up on them, not seeing them until I stopped short at the commotion. They were frolicking among the trees, flipping and chasing, their fat poufy tails billowing. They rolled and nipped and finally took off in a wild streak, never seeing me. I remember that morning as one of the best, one of the luckiest moments of my life. To have stood so close. To have laughed as they dashed away. To have been allowed into their world.

Today, instead, I mourned the little fella that I had spooked, worrying if he had used his energy to flee when he should have been conserving it. I moved on, making my way away from the direction of his tracks, offering him a wide berth with my own limping, uneven track.

I walked until I was disoriented, half knowing which direction the trailhead was in, half wanting to lose it entirely. I had walked the trail so many times, biked it and hiked it and skied it for years, that it was hard to get lost. But it was a wild wood with branches and thick trees that kept me on the trail most days. Today was a magical transformation. The snowshoeing so effortless, the floor so unbroken, the trees so open. I’d gone where I’d never been, would never go again.

Finally, I had to turn back, my foot aching. I had to retrace my trail or risk truly being lost. I cut around the hill with the fox bed and up to a ridge I was on earlier. Soon I caught sight of the main trail.

There were still no tracks on the trail; I was still alone, but glad for it. My thoughts returned to the wounded fox, what we had in common. How circumstances change life’s course, like an injury. And how things can come around again, like finding an old forest new again.

Kandace Chapple is a freelance writer and publisher of Grand Traverse Woman Magazine. She can be reached at www.kandacechapple.com.