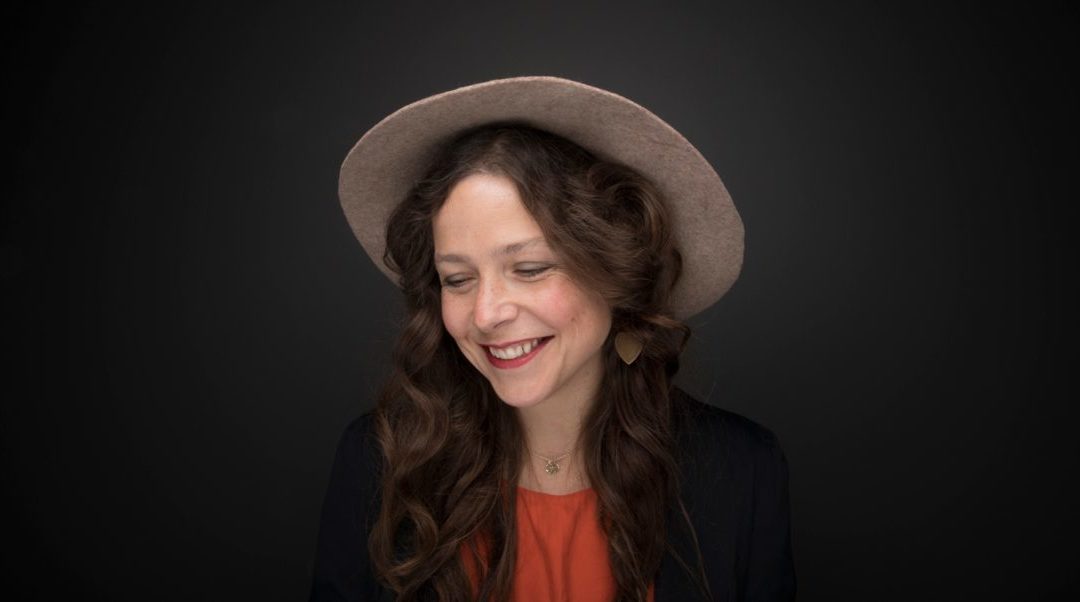 Don’t mistake May Erlewine’s new music for an artist’s attempt at reinvention. She’s simply unleashing the best parts of what was always a complex self.

This story is featured in the February issue of Traverse, Northern Michigan’s Magazine. Get your copy! 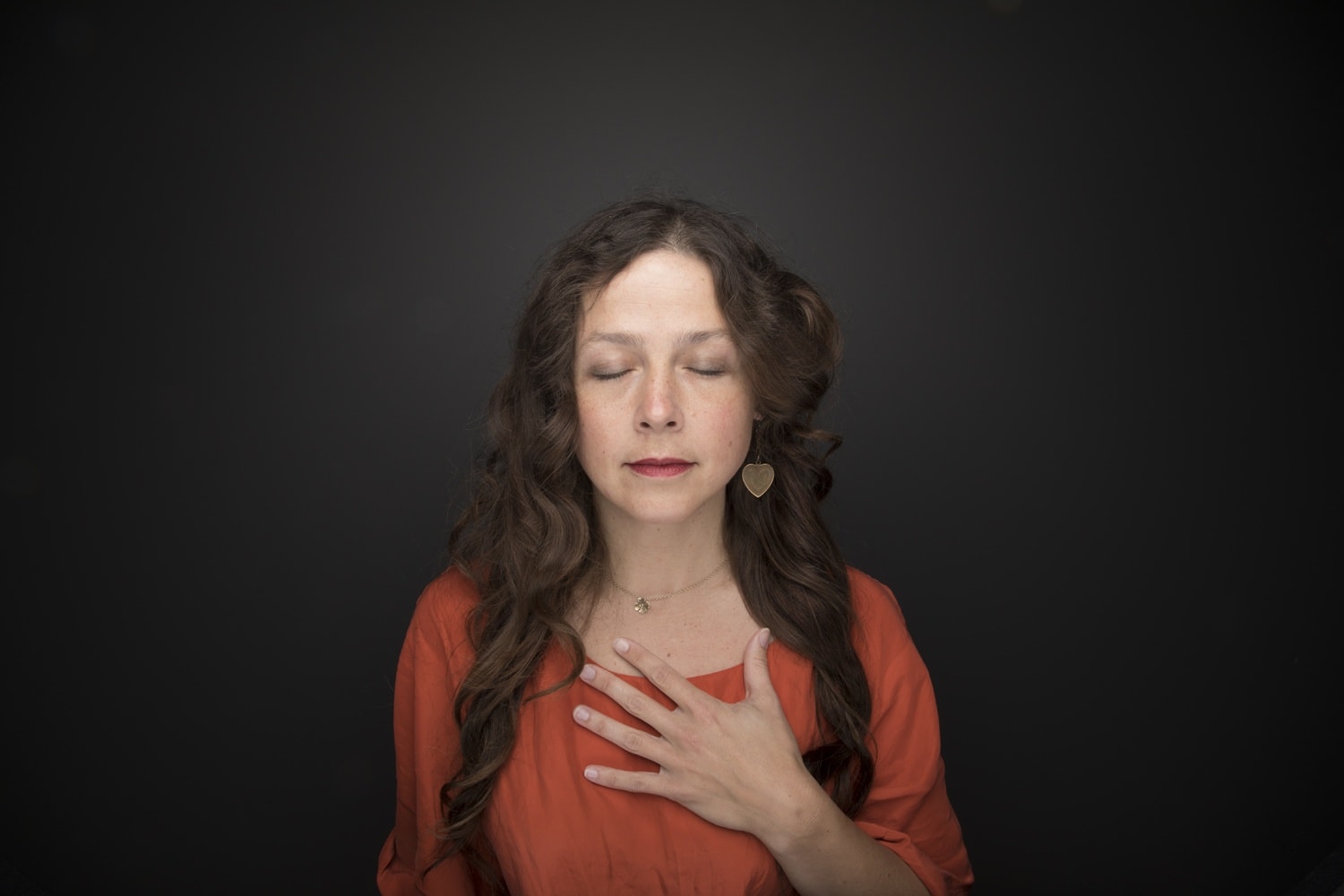 The letter arrived at the farm at what was admittedly a complicated time for May Erlewine. It was just before her return to the stage at Harvest Gathering, the annual music festival she helped organize many times on the land where she and her now ex-husband and musical partner used to share a home. The address on the envelope was handwritten, so she assumed the letter was actual correspondence and not just junk lost in limbo at a former address. But the sentiment was somewhere in between. Inside she found four full pages from a fan—or former fan—now so disturbed by a recent performance that he took the time to recount in detail everything he found so appalling.

He had happened to catch a set by May Erlewine and The Motivations, one of her newer projects, which posits her as a shouty, freewheeling leader of a soul-infused dance band. The concept was a bit too far from Erlewine’s usual songbird persona for this fan to handle—thus the lengthy, unsolicited critique in which he assumed she had, at best, abandoned her former sound to become more marketable, or at worst, become possessed by a “narcissistic need for adulation of a bunch of 20- and 30-year-olds.” The latter, by the way, danced very badly and obstructed his view of the show he clearly wasn’t enjoying anyway.

But despite the obvious hyperbole, the absurdity of the letter, Erlewine cried when she read it.

“This fan was so disappointed that he felt the need to write me,” she says. “I mean, I try to set the bar pretty high and not alienate people with what I do. But I’m a feeler. So any time I fail at that, I feel it. I won’t let it destroy me. But it does matter to me.” 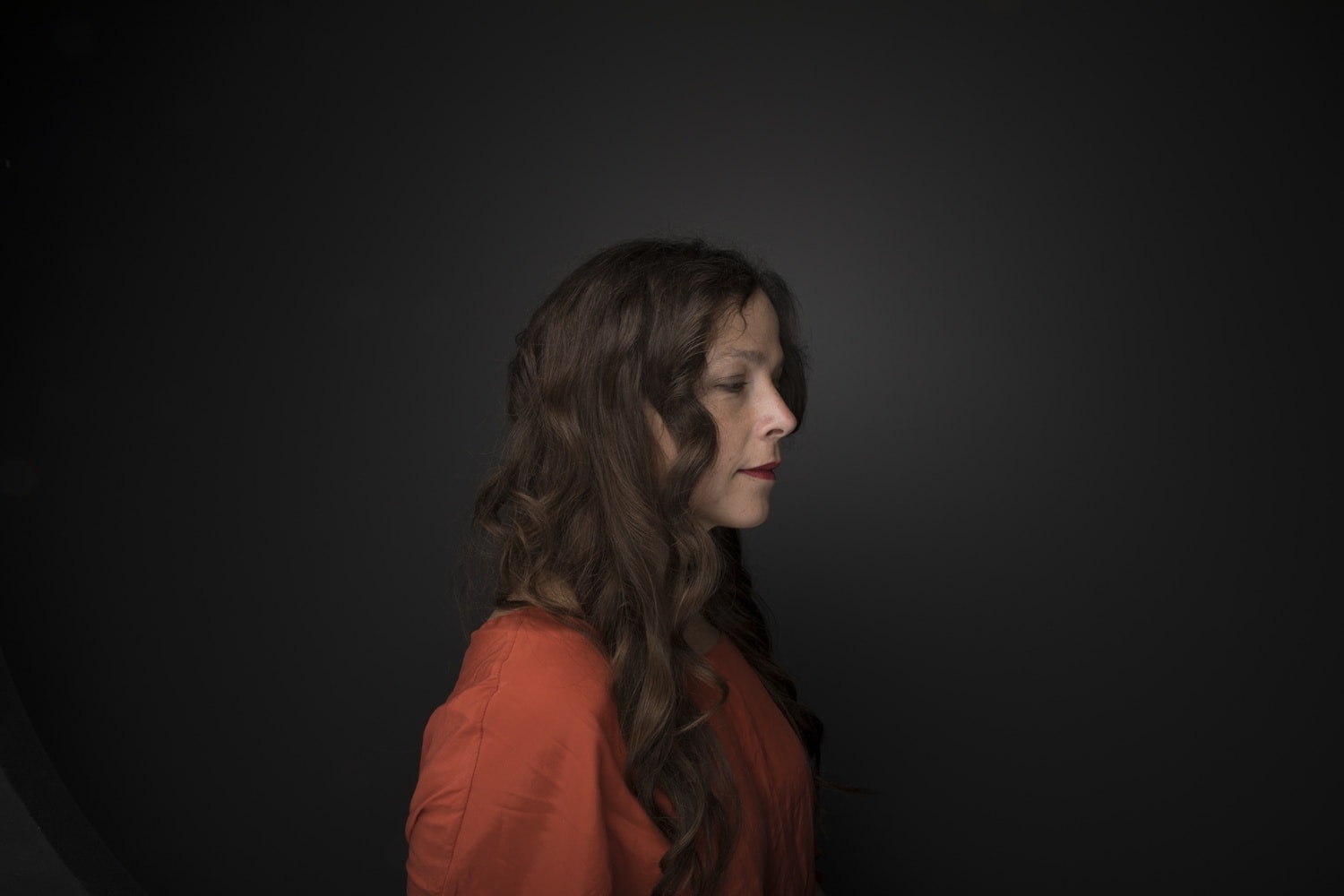 That May Erlewine feels the world more deeply than most people is a defining part of her personality that’s obvious after just a few hours of conversation or listening to one of her albums. Admittedly, May’s emotional realm can be confusing if you’re not made of similar stuff: When she talks of being joyful at the start of each morning, it easily could sound insincere or cheesy if you can’t relate. Regardless, it somehow comes across as genuine. The emotional intelligence is even more poignant when she talks about life’s tragedies, particularly the far-off ones, like the random acts of mass violence that have been plaguing the nation. She seems impacted by them in ways that defy the cynicism and numbness of the era, wherein such things hit many of us as repetitive, abstract headlines more than as actual human disasters.

She cites such events—and the current political climate— when talking about the foundations of her latest album, Mother Lion, a quiet, folk-pop collection that’s fueled by a complicated melancholy. But the songs also ring out as highly autobiographical. Grief has become a defining theme of Erlewine’s life over the past few years—a time in which she endured the unexpected death of more than one friend (including losing her best friend to an accidental overdose) and the end of her marriage. She prefers not to talk in detail about her divorce from Seth Bernard, a musical collaborator with whom many fans still identify her, though she understands people’s wanting to know what happened. From the outside, they appeared to have an enviable, sweet, simple kind of love—a relationship that seemed to take the logical storybook step when they had a daughter in 2014. Reality for the two was more complicated.

“I had my own grief from my marriage, which was not what I thought it would be,” she says. “And there’s such a stigma around not carrying on with a marriage. But sometimes it’s the healthiest choice. It’s not a dark choice, it’s a light choice. And I think it can become a trap if you don’t allow for that to be an option. Seth and I both tried to carry our way through it with a lot of respect and love—and intention toward breaking down those stigmas as much as we’re able. You don’t have to hate each other. It doesn’t have to be horrible, even if it’s incredibly painful.” 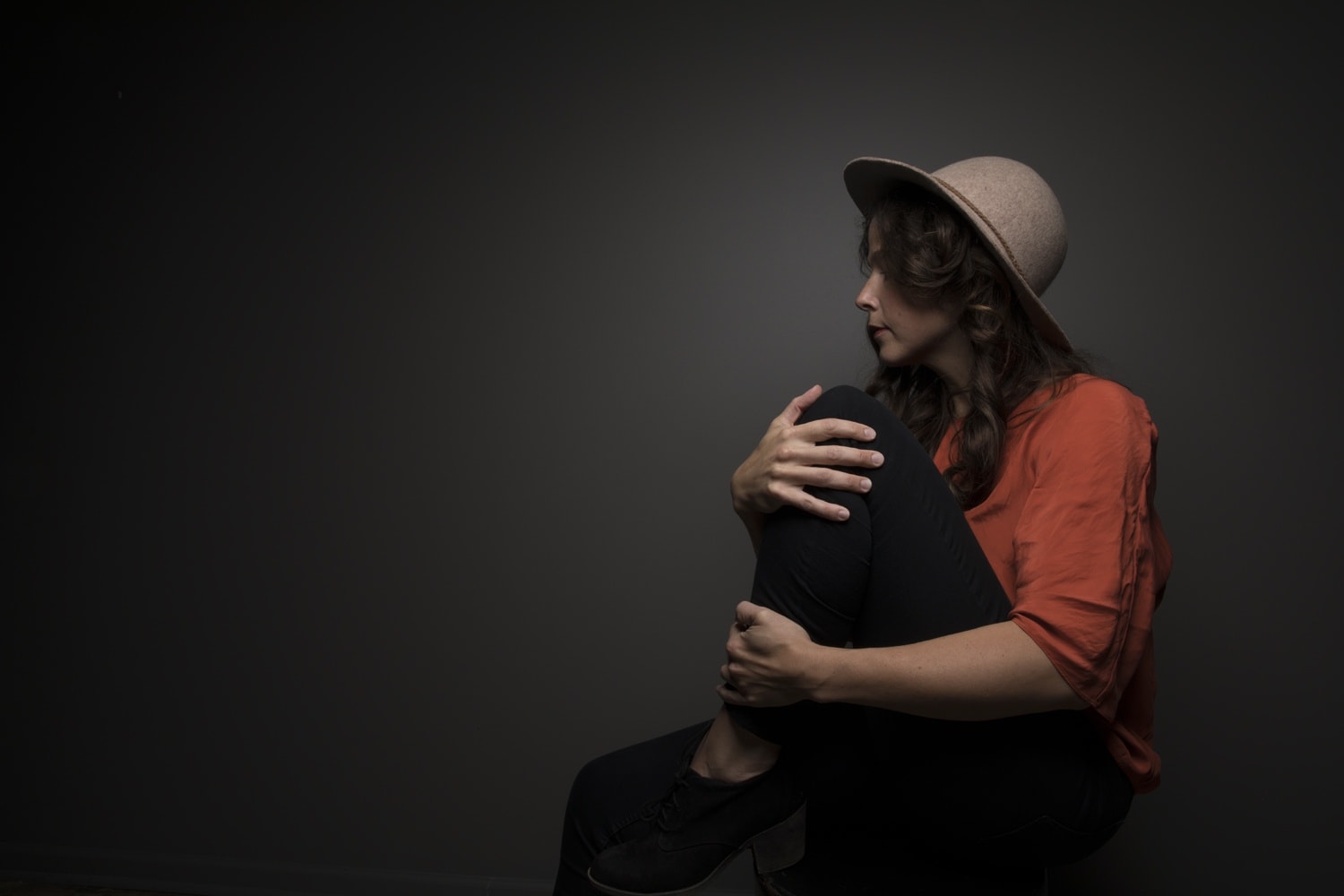 Indeed, if one were to read Erlewine’s lyrics on Mother Lion like a manifesto, the message might be that there is value in a thoughtful embrace of what are commonly understood as the dark, sad, painful human emotions; that there is something to be gained from an exploration of “the beauty of dark things.” In practice, Erlewine says, that takes shape as an effort to not suppress those emotions when she feels them, instead leaning into them, spending time with them, even finding ways to appreciate them. That gives these feelings value equal to other human experiences, like happiness, which are more socially acceptable to express.

It’s a complex, philosophical argument to lay out in the form of a pop album. But that is Erlewine’s medium here, and it is clear, if one takes time to listen for it, that this is not just an artist writing “sad songs because I’m sad.” Still, whether audiences would get what she was doing weighed on her mind when she started performing the new music in late fall. “I’m a deep-feeling person who struggles sometimes finding my place with that in the world,” she says. “For me, I see this social pressure for people who are sensitive to not be so ‘feely’—that it doesn’t belong, that it makes people uncomfortable. There’s pressure to make yourself more digestible. So putting out these really feely songs and trusting the world with it is sort of trusting myself to be in the world. I mean, this album is more ‘me’ than anything I’ve ever done, so if people don’t like it, they might not like me.” 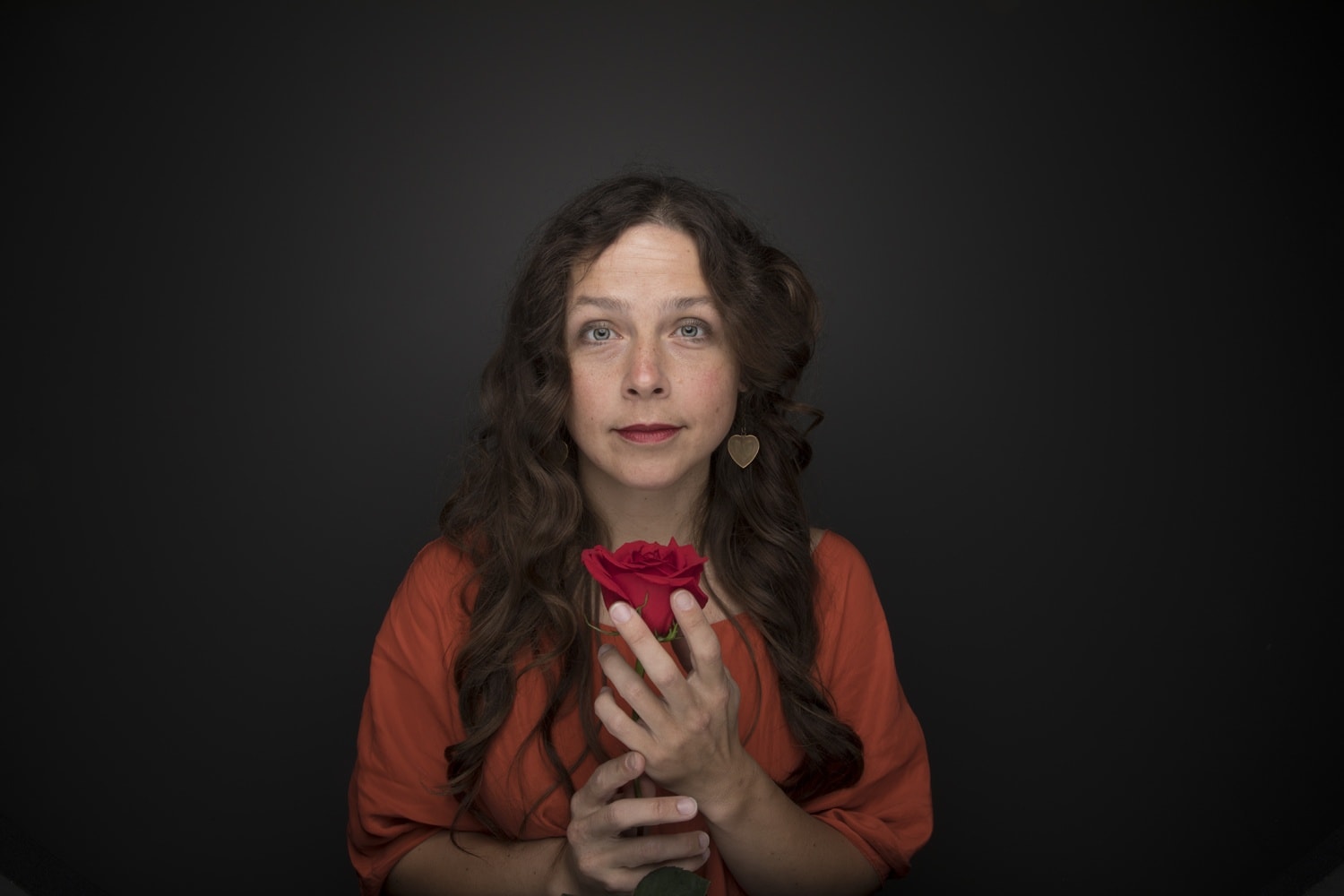 Even Erlewine’s voice is different in this setting: soft, almost whispering through many of the songs. It’s also stripped down, sans the folksy twang of earlier selves, conjuring a sound that more honestly echoes her speaking voice (which is something she says she worked hard at for this record). There are instrumental tracks in which her voice doesn’t show up at all—all of which is indicative of a diversity of self that is, to borrow one of the song titles, “never one thing.” Indeed, her life in music in general has many moving parts these days. No longer one half of a duo in which she was usually referred to second, she’s grown comfortable in a new role as a solo artist/bandleader in more than one context—including that soul band. Her songwriting on its own has captured the attention of other artists, opening up a new way to earn at least part of a living. Luckily, she says she honestly enjoys exercising different musical muscles, though admits that diversification and virtually “working all the time” is an economic necessity.

She’s also an older version of the self that first earned the loyal fan base that’s sustained her now for more than a decade. At 35, she looks young, but not youthful, her face now marked by a few creases that give her more credibility as a folk singer—especially one carrying the message she does. “I think the industry has it set up to look really shitty for getting older, but I think it’s a lie,” she says. “The whole image of a washed-up, tired old person in a hype-based industry can make you feel like there’s no place for longevity or having a lifelong career. Especially being a woman, the deck is stacked. But I don’t feel less connected. I’m writing better songs, and if anything, I feel more solid about what I’m offering. There are obviously not as many old musicians as there are young musicians. But I think if you have the passion, then it’s just who you are, and the age is going to deepen it.” What does she think of her younger self? She reforms the question slightly into what she might say to herself back then. A reflexively honest person, she takes a little time to pick out the right thoughts, commenting that it’s now been long enough where it’s hard to remember exactly what she felt like back then. But when the words come, the advice is lean, mostly positive, and free of the embarrassment one often has when looking backward at youth.

For one, she feels a continuity of sincerity with her past self—that the motivation for doing what she does has always been from the heart. If anything, she’d tell a younger May Erlewine to trust herself a little more and maybe not sing so loudly. “If you sing really loud when you’re a female singer, people like it,” she says, laughing. “Don’t get me wrong, I love doing that. When I was a teenager, I was in punk bands. But some of that, you’re doing for other people. So if I could tell myself something, it would be: ‘You don’t have to prove anything to anybody. What you are is just enough.’”

Audiences have known that for a long time. Now that Erlewine is seeing it too, fans would be smart to stick around for everything that happens next.

Lou Blouin is a public radio producer and writer who lives in Detroit. lou.blouin@gmail.com. // Michael Poehlman is a Traverse City-based commercial, portrait, and fine art photographer. Check out some highlights at michaelpoehlman.com.