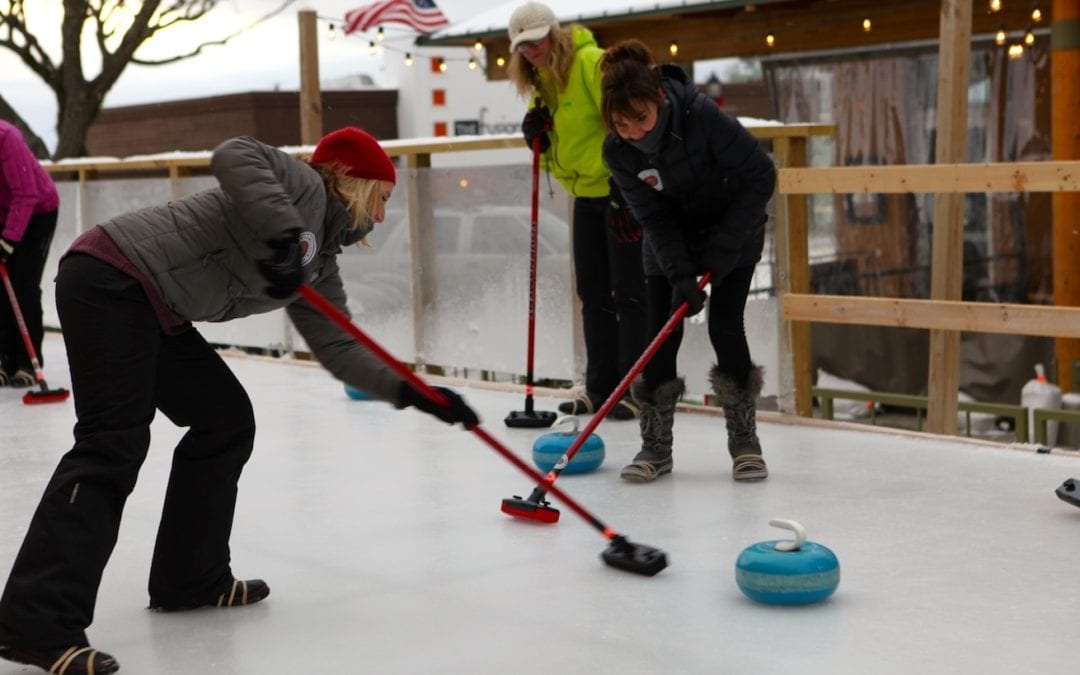 The PyeongChang 2018 Winter Olympics begin this February but patrons at Stormcloud Brewing Company are already enjoying the thrill of one cold-weather Olympic event—the sport of curling.
For the third winter in a row, the Northern Michigan microbrewery has constructed an outdoor curling sheet next to its pub in downtown Frankfort. The curling sheet is host to a 12-team curling league that meets Thursday nights and Sunday afternoons, in addition, Learn to Curl Lessons are offered on Saturdays with instruction from the Traverse City Curling Club.
“Anyone who lives in Northern Michigan all winter long knows it’s essential to stay active,” says Stormcloud’s co-owner Rick Schmitt. “When we first looked into using our outdoor space next to the pub for a wintertime activity, curling immediately came to mind. It’s a fun sport that people of all ages can enjoy.”
Due to space limitations, Stormcloud’s curling sheet is approximately half the length of an official curling sheet. Also, the stones are smaller to compensate for the shorter sheet. Otherwise, the rules are the same. Curling is similar to the sport of shuffleboard with two teams sliding granite stones across the curling sheet toward a circular target on the ice. Players use a curling broom to sweep the ice in the path of the stone to help guide it. Team points are scored for stones closest to the target area.
On top of adding four more teams to this year’s Curling League, Stormcloud is offering private 90-minute lessons to groups with a minimum of eight people. “This is the third year we’ve built the curling sheet and it gets more popular every winter,” Schmitt says.
For more information about curling at Stormcloud, visit stormcloudbrewing.com/curling.