The Northern Michigan Wine Industry Had an Incredible Year 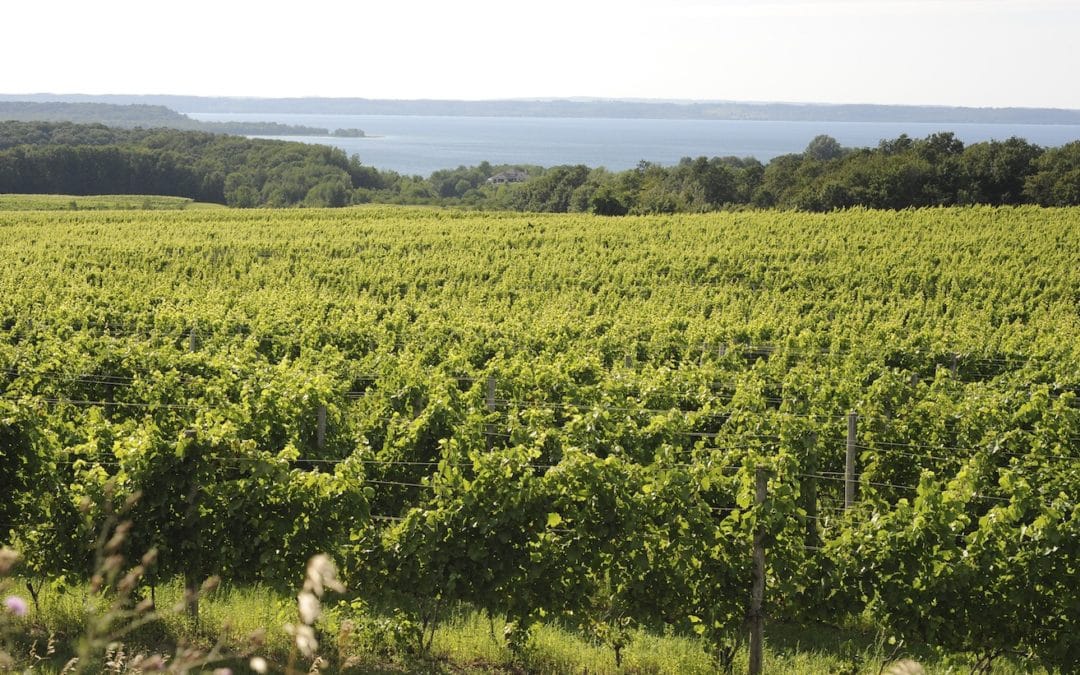 For many reasons, 2017 was a noteworthy year one for the Northern Michigan wine industry. From new tasting rooms opening to an excellent harvest, various awards, and a new wine trail partnership to boost the industry’s national profile, there was a lot going on.

The mid-September heat wave helped make this year’s crop one of the best in recent memory. “We were a little nervous coming into fall,” says Jenelle Jagmin of the Michigan Grape & Wine Industry Council. “The heat wave really helped the grapes, especially Leelanau and Old Mission. It came just in time.”

Bryan Ulbrich, the self-styled “wine Sherpa” at Left Foot Charley, goes even further than Jagmin in praising the grape crop. “This year’s harvest was amazing. It was a very bleak outlook in August—it’s like we were down 3-0 in the eighth inning. The heat absolutely saved us,” he says.

The unseasonably warm temperatures in September and October actually caused some worry that one of the specialty wines might not be available. “We were a little worried they would forego ice wines because it was such a warm fall. But we’re seeing a lot of talk on social media about it,” Jagmin says. “There’s always a limited, exclusive quantity.”

This was the second year in a row for a good harvest, especially welcome after the 2014 and 2015 harvests. “We were very lucky to have two good harvests. The previous two were horrible. We’re recovering nicely,” Jagmin says.

Ulbrich notes there will be plenty of excellent wine as a result. “The quantity is good, the quality side is great. I’m really excited. Things look good with the 2017 vintage.” 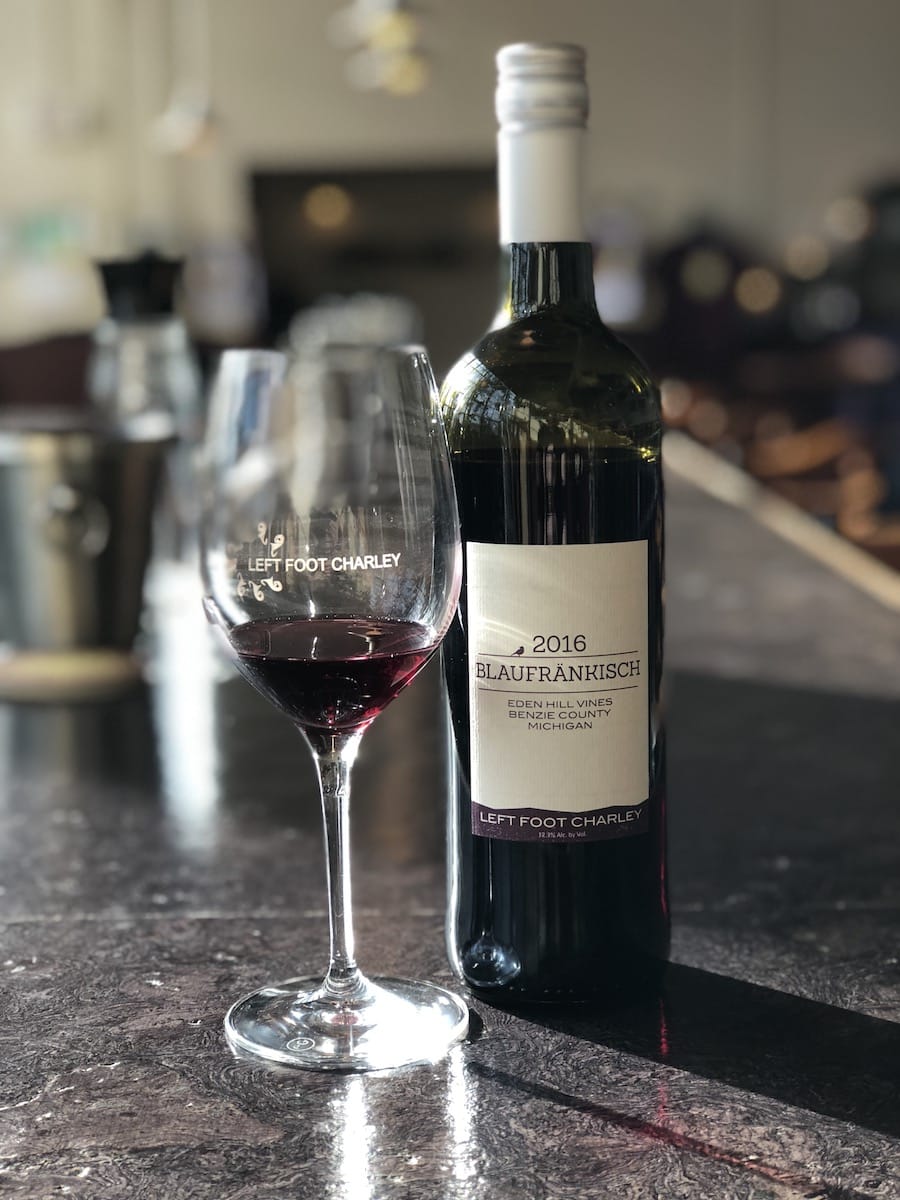 Several other wineries from the region participated in the competition. Brys Estate’s Merlot 2012 received a double gold, while L. Mawby’s Talismøn NV won a gold. Other entries from Bel Lago Vineyards & Winery of Cedar; Brys Estate Vineyard & Winery, Chateau Chantal, and Hawthorne Vineyards of Traverse City; and L. Mawby and Shady Lane Cellars of Suttons Bay received a mix of bronze and silver awards. “Doug Frost (who runs the Jefferson Cup Invitational) is a really well-respected wine personality. Just to be invited puts us on the map,” Ulbrich says.

One new development this year was the debut of the Traverse Wine Coast, combining the Leelanau and Old Mission Peninsula wine trails. While the two AVAs (American Viticulture Areas) will continue to operate independently in some areas, they are combining forces for increased visibility in media, especially national promotion.

Todd Oosterhouse, co-owner of Bonobo Winery on Old Mission Peninsula, says aligning the two will provide greater impact, especially outside the area. “Joining of the two AVA’s under one common title will help to further the evolution of the thriving Northern Michigan wine scene,” he says.

The two first combined forces for Traverse City Uncorked, an initiative that debuted during Michigan Wine Month in May 2017. Its success no doubt influenced the decision to proceed further down that (wine) trail. For those tasked with promoting the entire region, it’s a no-brainer. “Promoting our wine region as one and connecting it to the Traverse City brand will have a huge impact moving forward,” says Trevor Tkach, President and CEO of Traverse City Tourism.

Of course, those are not the only wine trails in the region. The Bay View Wine Trail extends from Ellsworth to Harbor Springs, with stops along the way in Alanson and Petoskey. New as of November is Spare Key Winery in Charlevoix, one of eight new wineries approved at the Michigan Grape & Wine Industry Council meeting on November 30.

It all adds up to a hefty impact on the economy. A statewide study conducted for the Michigan Grape & Wine Industry Council revealed the state’s wine industry is responsible for more than $5.4 billion in economic impact, including more than $426 million paid in state and local taxes. The Michigan wine industry directly creates nearly 28,000 jobs and pays $773 million in direct wages.

“In 2007, there were 49 wineries in the state. Since then, we have seen a 169 percent increase, with 83 new producers of Michigan wine having opened for business in the past 10 years,” says Karel Bush, the executive director of the Michigan Grape & Wine Industry Council. And the industry’s influence is felt far beyond the tasting rooms. “Wine tourism affects many other nearby businesses, including restaurants, retailers, transportation services, and other attractions. The industry also creates jobs and benefits other local sectors, including construction, manufacturing, and business-related services.”

While it may slow down in the winter, the wine industry never stops. Tickets are now on sale for several annual wine tasting events including Winter Warm Up, Sips & Soups, Taste the Passion, and Romancing the Riesling.

Winter Warm Up | Saturday, January 13
Beat the winter blues with the Wineries of Old Mission Peninsula. Savor delectable comfort food creations paired with local wine—a duo you’re sure to warm up to! Tickets are $30 in advance (available at MyNorthTickets.com) or $35 the day of and include a souvenir wine glass.

Sips & Soups | Saturday, January 20
Warm up along the Leelanau Peninsula Wine Trail during our Sip & Soups event. You’ll enjoy delicious soup and wine pairings along with gorgeous views along the trail.Tickets are $20 per person and include a souvenir wine glass. In addition, $5 from each ticket sold is being donated to the local food banks. Tickets sold out in 2016 and 2017, so get your tickets right away!

Taste the Passion | February 10–11
Winter Wonderland is here. Gather your friends and embark on an adventure of snow-covered vineyards and sweet and savory bites paired with amazing wine. This fun-filled winter celebration takes place Saturday from 11 a.m. to 5 p.m. and Sunday from noon to 5 p.m.Tickets are $40 per person for both days and include a souvenir wine glass, delish Leelanau wine and food pairings, and snow-filled photo contests with super cool prizes.

Romancing the Riesling | Saturday, February 17
This event celebrates one of the varietals for which this wine region is most celebrated. Each participating winery pairs favorite local rieslings with a food pairing from an area restaurant partner. Tickets are $30 in advance, $35 the day of and include a souvenir wine glass.