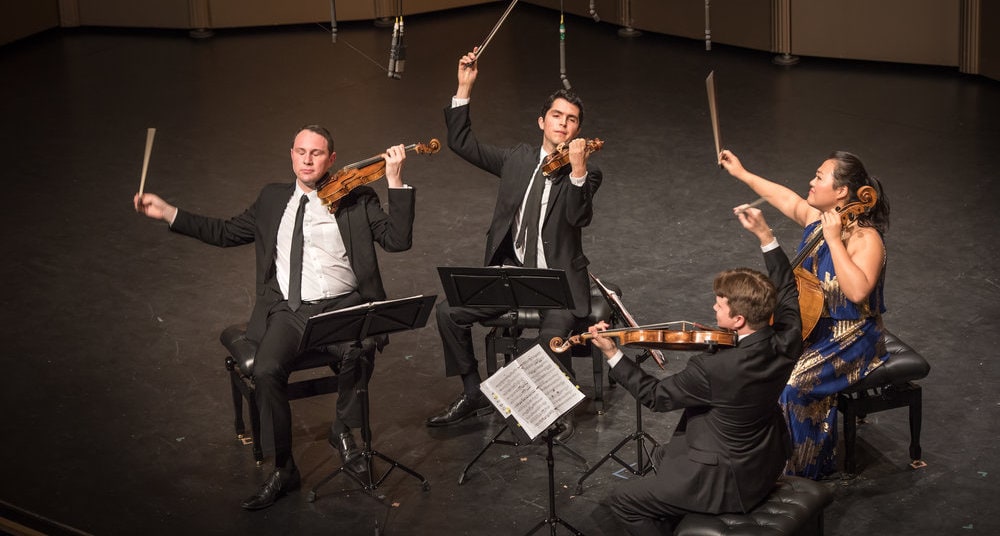 Over the years, Interlochen Center for the Arts has hosted some of the world’s foremost string quartets: Kronos Quartet, Turtle Island Quartet, Ying Quartet, and Manhattan String Quartet are just a few of the ensembles that have performed at the renowned arts center.

On February 1, one of the foremost new quartets on the scene will take the stage at Corson Auditorium. Hailed for its “deep reserves of virtuosity and irrepressible dramatic instinct” by the New York Times and winners of the inaugural M-Prize International Chamber Music Competition in 2016, the Calidore String Quartet is already one of chamber music’s most popular groups.

Violinist Ryan Meehan says he sees a bright future not only for his group but for the genre as a whole. “Chamber music is growing. When the Guarneri Quartet and Emerson String Quartet formed, there were far fewer quartets than there are today. There’s an incredible amount of young quartets making a living. That’s a great benchmark for the health of our art,” he says.

Meehan, fellow violinist Jeffrey Myers, violist Jeremy Berry, and cellist Estelle Choi formed the group while students at the Colburn Conservatory of Music in Los Angeles in 2010. They chose the name “Calidore” as an amalgam of California and “doré” (French for golden), representing a reverence for the diversity of culture and the strong support it received from its home of origin, Los Angeles, California, the “golden state.”

The group looked at the many string quartets who had come before them for guidance and inspiration, in particular, the Guarneri Quartet and the Emerson String Quartet. Sheehan says he and his fellow quartet members owe a debt of gratitude to them for their support. “There are no words to describe our gratitude to all the quartets and individuals.”

He credits Arnold Steinhardt from the Guarneri Quartet with offering wisdom gained from his years of performing to the members of Calidore. “It’s not just about incredible musical insights, but the business, getting along, performing concerts,” Sheehan says.  That’s appropriate, as Sheehan says the group intends to work and perform together for many years. “We’re in it for the long haul.”

The Emerson became mentors for the group when they were both artists-in-residence at Stony Brook University in New York City. Sheehan says Calidore has performed joint programs with Emerson, which have given his group priceless exposure. “Our association with them has done amazing things for our career.”

Sheehan says those mentorships have encouraged him and his fellow quartet members to pay it forward. They have educational residencies at the University of Michigan, where they won the $100,000 M-Prize competition, and the University of Delaware. “We go there and play side-by-side with students, do master classes, rehearse with them, a wide array of things. It’s fun for us. At festivals, we see some of the students we’ve worked with.”

Sheehan says the time is valuable for them as well. “It reminds you of what you need to work on. It’s incredibly helpful,” he says.

All four members have active solo careers outside the quartet. For Sheehan, that means performing with other groups, from symphony orchestras to other chamber groups. “I do a lot of solo work. I have a lot of friends who have chamber music festivals and play with other chamber festivals,” he says.

The group has released three commercial recordings, the most recent of which is quartets by Tchaikovsky and Mendelssohn recorded live in concert at the 2016 Music@Menlo Festival. The French label Editions Hortus released the Calidore String Quartet’s second studio recording, Serenade: Music from the Great War, featuring music by Hindemith, Milhaud, and Stravinsky, along with the world-premiere recording of Jacques de la Presle’s “Suite en sol,” and the second recording ever of Ernst Toch’s “Serenade.” The group released its debut recording of quartets by Mendelssohn and Haydn in February 2015.

The Calidore Quartet’s repertoire includes both new music and compositions by composers such as Beethoven, Shostakovich, Mendelssohn, and Schubert. “I love Bach. Bach is my guy. The first solo Bach (I played) was magic,” says Sheehan. “Schubert as well. I fell such an affinity for how he can make major keys feel so sad. His subtlety and nuance are so rewarding for me.”

The Calidore Quartet performs February 1 at 7:30 p.m. at Corson Auditorium. Tickets are $29. Go to tickets.interlochen.org.

Also Read: From Interlochen to the World, Famous Alums Reflect