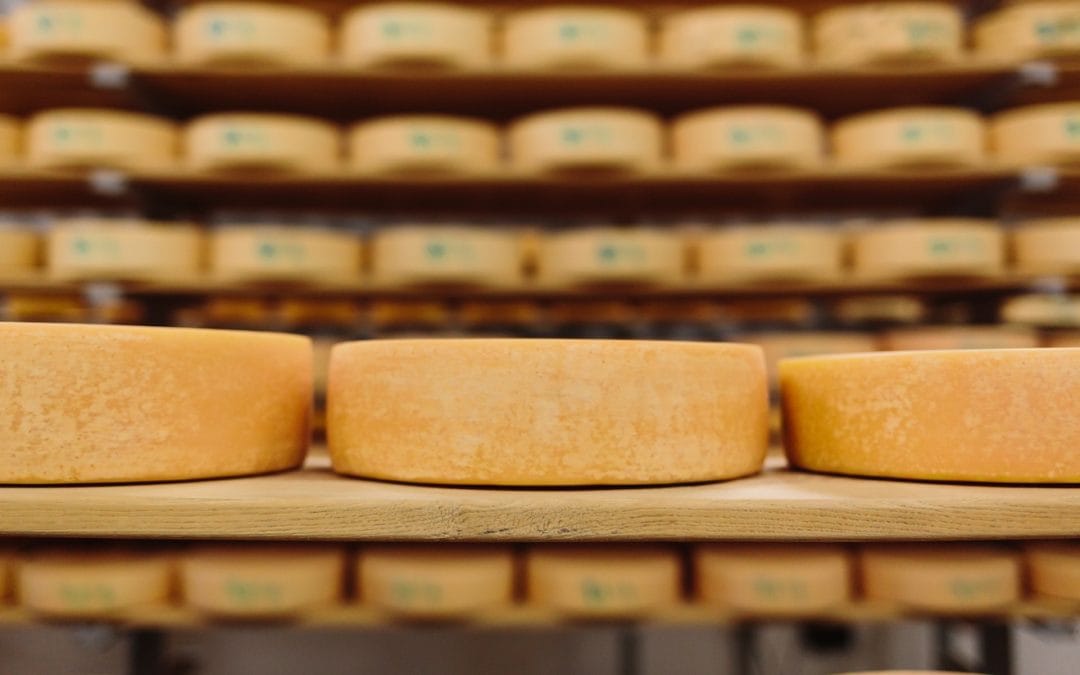 Leelanau Cheese’s raclette won one of the world’s most prestigious cheese awards last year. We asked founders John and Anne Hoyt to share their fromage journey and favorite raclette recipes.

Enjoy the three online-exclusive recipes below, and get the January 2018 issue of Traverse, Northern Michigan’s Magazine for two more mouthwatering dishes (mushroom risotto with black truffle fromage blanc and a double cheese and roasted tomato tart). 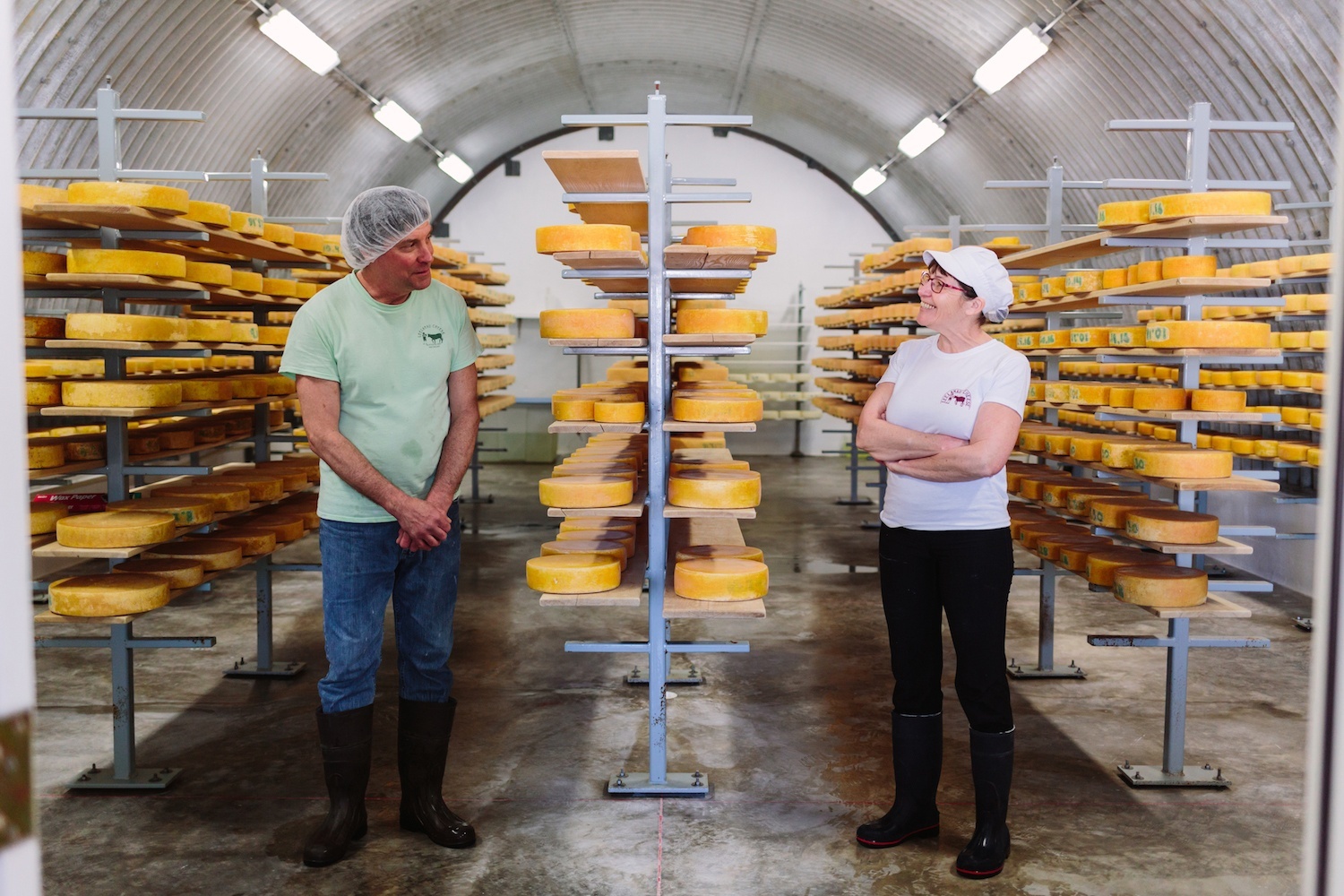 In his 2010 memoir Medium Raw, Anthony Bourdain writes: “You have to be a romantic to invest your money, and your time, in cheese.” In that context, Anne and John Hoyt are true romantics. Ever since these two “city kids” (he from Detroit, she from Roubaix, France) first met over three decades ago at a remote Alpine creamery in the little village of Eison, in Switzerland’s Canton Valais, they have tied their futures and fortunes to each other and to the art of cheesemaking.

Today, given the tremendous popularity of the award-winning Swiss-style raclette and French-style fromage blanc they have been producing and selling for over 20 years, it’s obvious that their investment has worked out well for them, professionally and privately.

John studied cheesemaking at the Chateauneuf School of Agriculture in Sion, Switzerland, and followed with a four-month apprenticeship that led to a cheesemaker job in Eison in 1986. In August of that same year, Anne, who was working as a shepherd in another part of Switzerland, decided she needed a little break and set off on a hiking trip through the Alps with some friends. One day she showed up in Eison, and it was love at first sight (and bite—Anne says she first tasted raclette melted over an open fire on that trip, and it was the best meal she had ever had). It didn’t take much convincing from John to get her to stay on and work with him there. 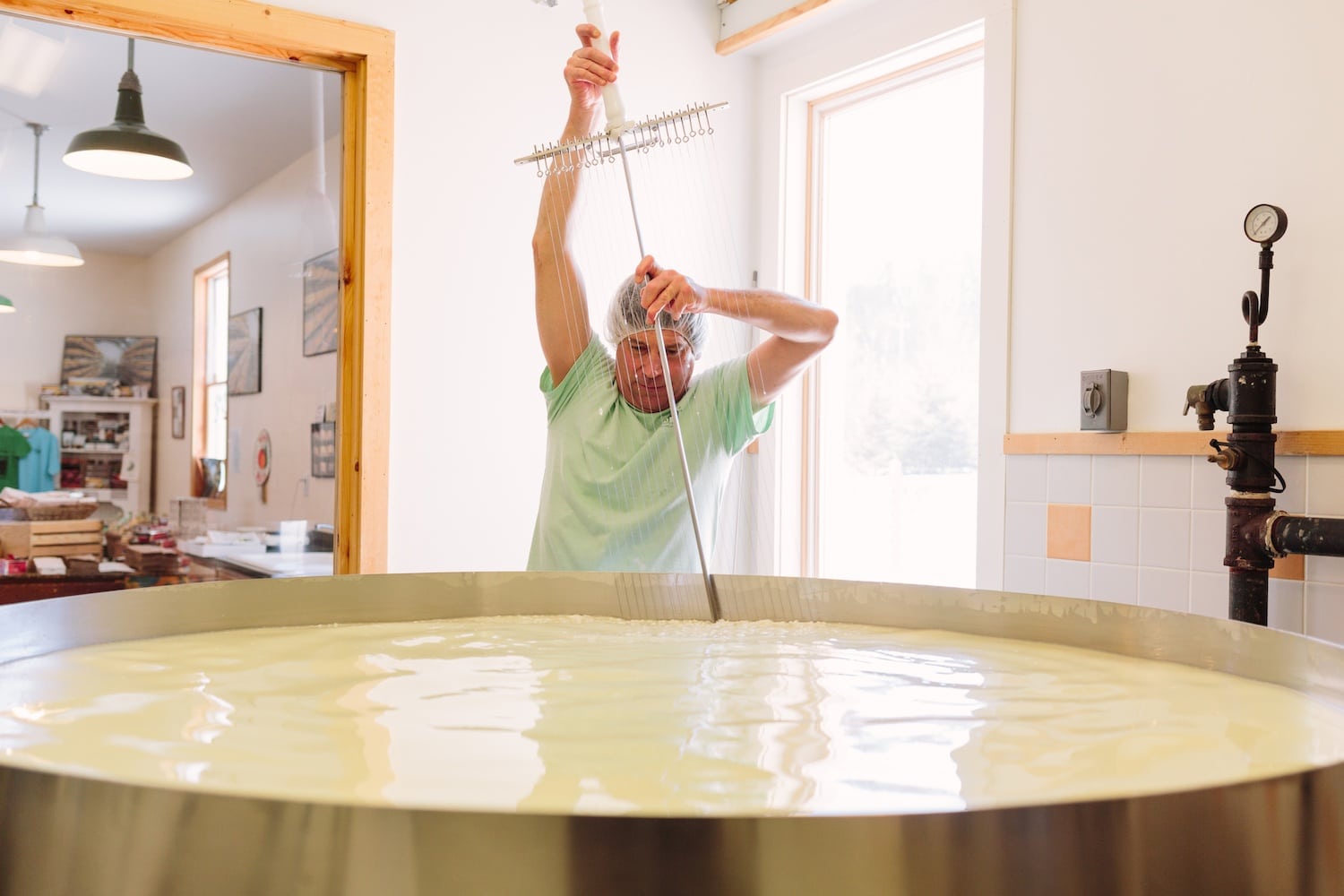 “We became a team right away,” says Anne. She’s as spirited as a French schoolgirl with her thick, dark hair tucked up inside her crisp, white, billed cap, as she looks up at her husband of nearly 29 years with a smile. He’s leaning over a gleaming 300-gallon vat in their immaculate cheesemaking “kitchen,” as they call it, working on today’s batch of raclette. The man of Anne’s affection is clad in a Leelanau Cheese logo T-shirt, jeans, tall black rubber boots, heavy apron, hairnet and plastic gloves up to his armpits. He methodically moves a large cheese cutter through the sea of milk, cultures and vegetable rennet that is slowly being transformed into pea-sized curds. John pauses, turns his head, and says warmly, “I couldn’t do this without her.”

The two worked on Alpine farms and in vineyards in Switzerland for a couple of years after joining forces, but were ready for a change by the end of 1988. They flew to Detroit so that John could finish the university degree (in technical French business language and marketing) that he had broken off some 10 years earlier to explore Europe. He and Anne married the following spring at the Wayne County Courthouse.

Over the next few years, they made several trips to the Grand Traverse-Leelanau region, happily succumbing to the lure of the North. Here, they were eventually able to realize their dream of opening a creamery and making the raclette cheese that is native to Canton Valais, where their adventure together had begun. They founded Leelanau Cheese in Omena in 1995, moved to the Black Star Farms tasting room in Suttons Bay in 2000 when they outgrew the Omena space, and then to their present location just south of Black Star Farms in 2014. 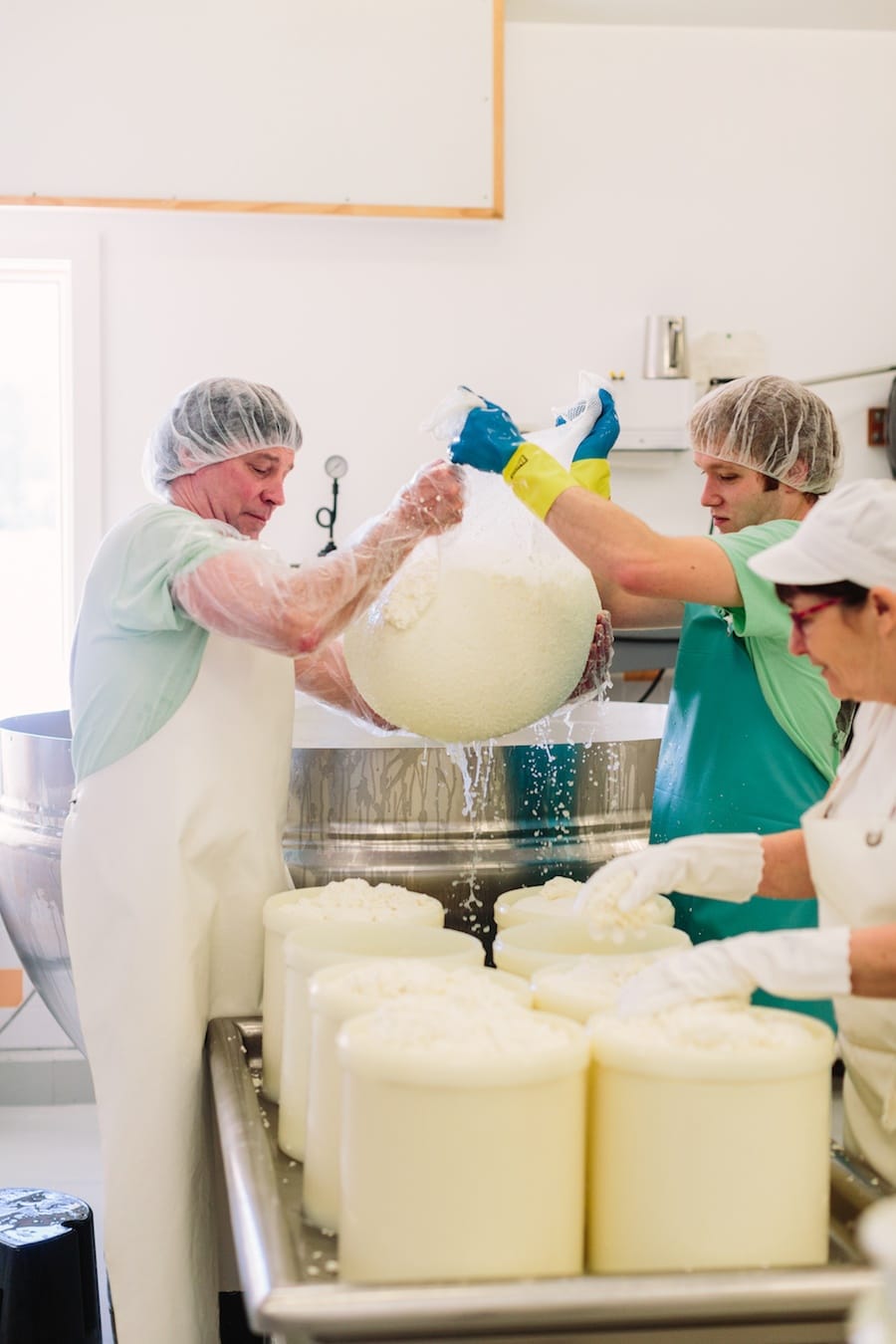 And here they happily continue their adventure, two romantics in their small cheese factory. Granted, the room doesn’t appear romantic on its surface—a large, high-ceilinged, health-code sterile, and brightly lit space, wide open to public viewing through the large bank of show windows that divide it from the creamery’s retail shop. Lively music plays in the background, echoing as it bounces off the immaculate painted-and-polished concrete floors and shiny white-tiled walls. Filling the space is a panoply of equipment needed for the cheesemaking process: tubs, mixers, timers, temperature gauges, scales, brushes, squeegees, hoses … As for the cheesemaking process itself, it is carried out mostly in silence, running as smoothly and as precisely as a Swiss watch. Talk is unnecessary. Everyone knows what to do.

Surprisingly, there is no “cheesy” smell here. Not even a milky smell. While Anne (also gloved, aproned and booted) continues to clean and spray what seems like every surface in the room, John finishes cutting the curd, having checked it for the right consistency at regular intervals. Then he and his assistant use a large net to transfer the curds to a long stainless steel table. With Anne having moved in to help, the curds are scooped into large micro-perforated round plastic molds where they are drained of excess whey, punched down like freshly risen dough, and topped with 20- to 30-pound weights that press out the remaining whey.

In what seems like no time at all, the loose, lumpy mass of curds becomes a smooth, homogenous, gelatinous-like cylinder that easily slides out of its confined quarters into John’s hands and onto the table. He produces a wire cutter and quickly and deftly slices the cylinder horizontally into two uniformly thick rounds. He gives each round a little toss in the air (showmanship!) to remove any remaining liquid before returning them to the molds, one atop the other, separated by a plastic disk. Then the weights go back on to continue pressing overnight. 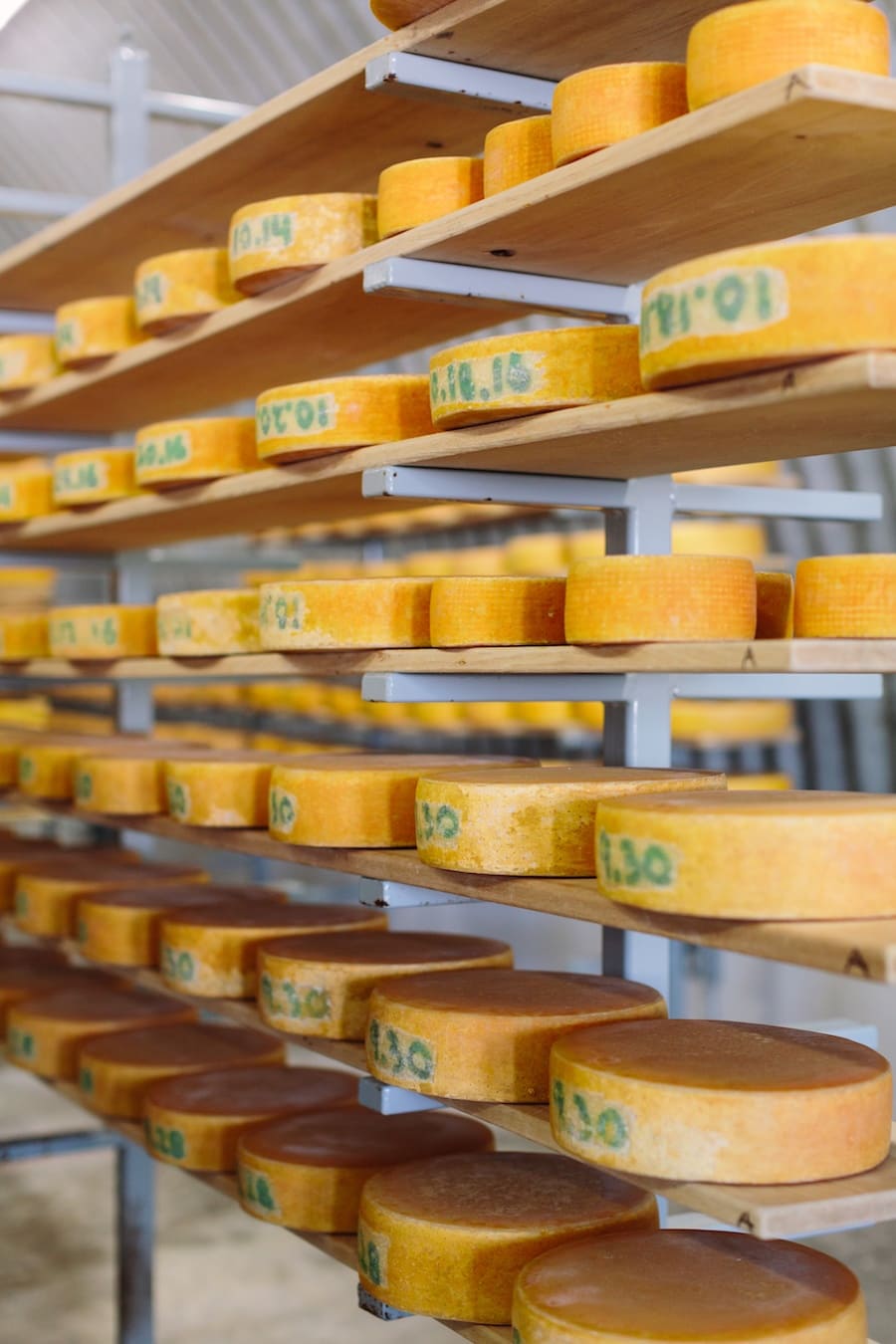 In the morning, each of these youngest wheels will be unmolded and moved to the naturally cooled cheese cellar tucked into the hillside behind the creamery. They will luxuriate there in a 24-hour salt bath before joining about 1,300 of their older siblings on the neat rows of metal-and-plastic shelves (capacity is 2,000 rounds). They will also be dated, regularly turned and brushed or rubbed with a salt brine. John and Anne’s raclette rounds age three to four months, until the creamy white exterior has turned to a deep golden-hued rind and the flavor has developed into the traditional nutty, buttery taste—hallmarks of a perfect wheel of raclette.

Every other day except weekends, year round, this process repeats itself. At 6:45 a.m., John drives his self-customized pride and joy (a Super Duty Ford truck with an 800-gallon milk tank mounted on its bed) to the Schaub dairy farm near Lake Leelanau. There, with a cleverly tricked-out system of hoses and pumps, he fills the tank with fresh milk from the farm’s Holstein cows and heads back to the creamery. Thus begins the 12-hour day that will at its end have produced the freshest batch of this award-winning raclette.

Leelanau Cheese’s aged raclette has won gold or silver or bronze many times at national or international competitions, but in 2016, Anne and John’s mild raclette won a coveted Super Gold at the prestigious World Cheese Awards in San Sebastian, Spain. “That’s the equivalent of Best of Class,” says Anne. “There were 3,060 cheeses in the competition, and just 66 Super Golds, which means we are one of the world’s 66 best cheeses of any kind, not just raclette. It tells us we must be doing something right. I think if we could find a way to take more time off, we could go on forever with this, because we really do like what we do—we like making cheese. It’s our life, it’s our baby.” 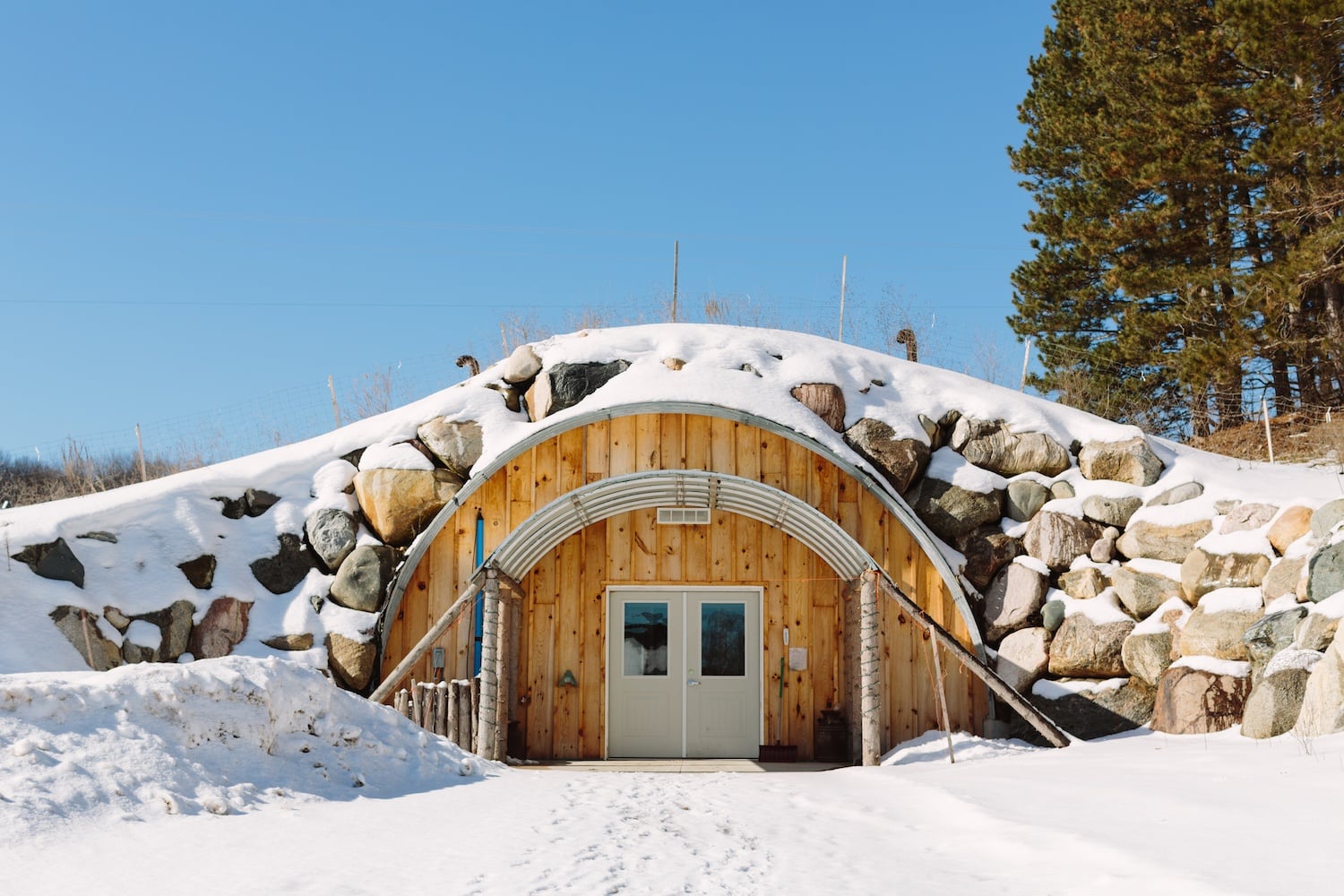 While Anne and John are equal partners in their business, their official roles vary: He makes the cheese, and she runs the retail and wholesale side of the business. Anne’s cozy domain stands in sharp contrast to the sterile atmosphere of John’s domain. In the store, milk cans, baskets, wooden tables and cupboards display a wide array of crackers and locally made artisan food products like American Spoon Foods preserves and Jelinek Apiaries honey that pair well with the cheeses made onsite. T-shirts, cutting boards, cookbooks, raclette grills and condiments to accompany a raclette dinner round out the mix. Keeping the mood light, a sign reading “Please do not feed the cheesemaker” is taped to the windows that look into the kitchen.

The pièce de résistance in the store is a large glass-door cooler that holds wedges, half-wheels and mini-wheels of mild, aged, rosemary, green peppercorn and black truffle raclette (the latter of which has become a customer favorite) and dozens of neatly stacked tubs of fromage blanc flavored with herbs, peppercorn, garlic, dill, black truffles or local cherries. All are waiting to be savored just as they are or used in a wide array of recipes by Leelanau Cheese customers—and by John and Anne when they relax at home after another long “day at the office.”

After all these years, neither their enjoyment of spending time together nor their taste for their own products has waned. “I am a vegetarian, and I also don’t like milk or butter, but I love cheese!” says Anne. “We use our raclette and fromage blanc in Mexican food, pasta dishes, pizzas, onion soup and many other ways. We love to entertain, too, and our guests would be disappointed if we didn’t serve them at least one cheesy dish!”

Stop by 3324 SW Bay Shore Drive (M22) just south of Suttons Bay, or look for their raclette and fromage blanc at grocery stores and gourmet markets throughout Northern Michigan. For more information, call the creamery at 231.271.2600 or visit leelanaucheese.com.

Raclette Recipes to Try at Home! 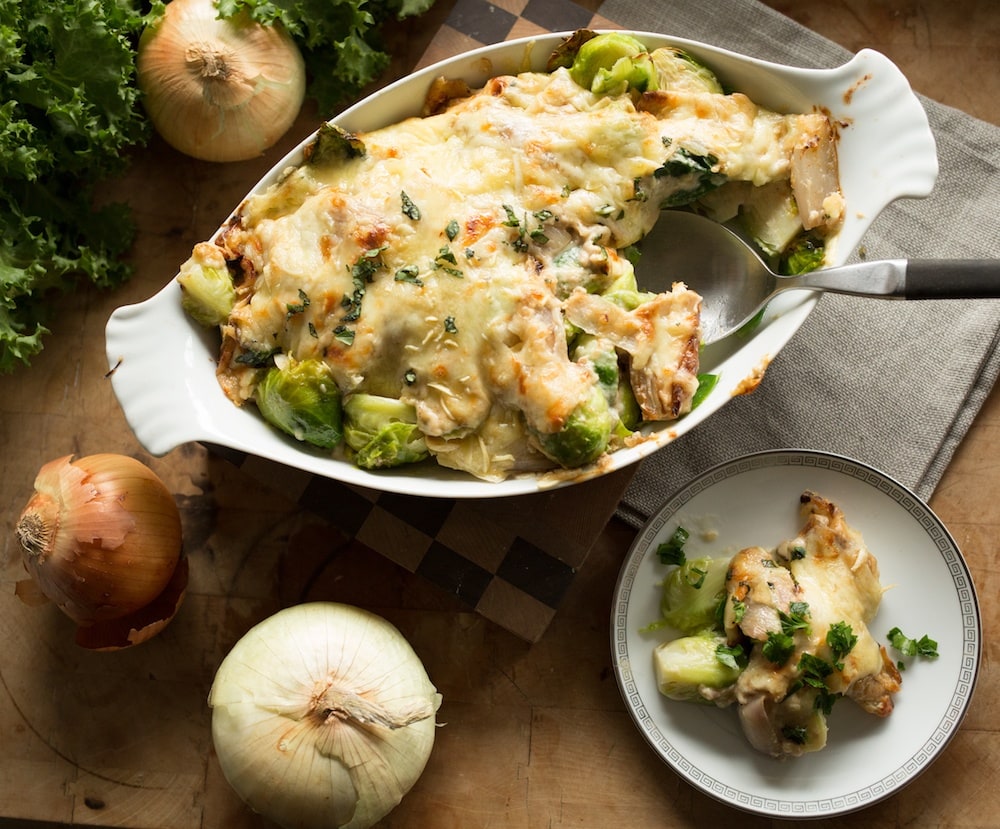 Over the past few years, Brussels sprouts have unexpectedly become the new darling of the culinary world, starring in everything from appetizers to salads, stir-fries, breakfast dishes and more. But the simplicity and deliciousness of pairing them with melty cheese never gets old.

Get the recipe for Brussels sprouts and raclette gratin. 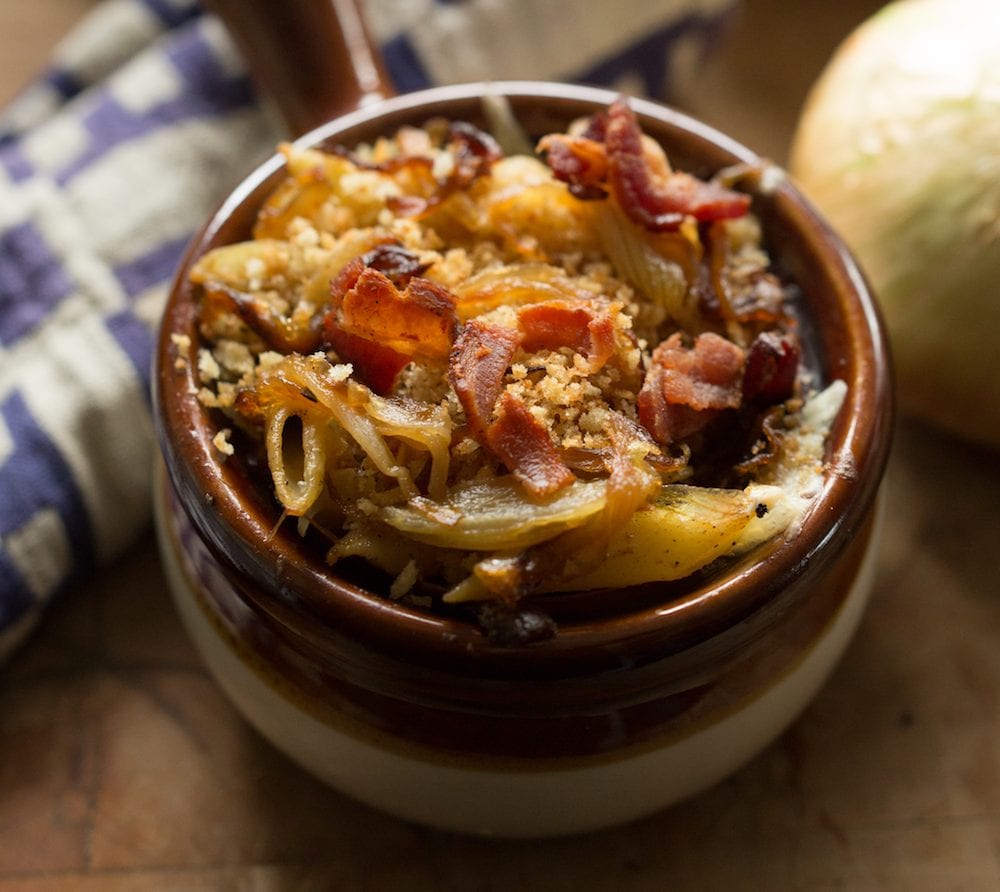 This hearty traditional Alpine dish is a favorite among Swiss families and is usually served with sautéed apples. The recipe is adapted from the cookbook A Taste of Switzerland by Sue Style (who is a good friend of the writer).

Get the recipe for Alpine macaroni and cheese. 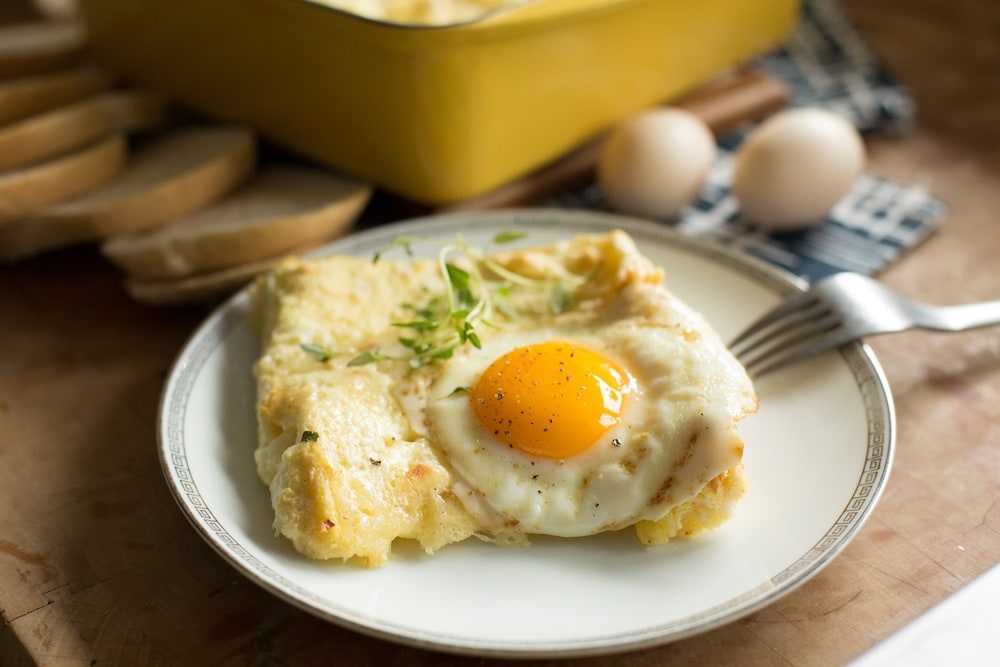 This recipe from Leelanau Cheese’s Anne Hoyt is the amped-up, eat-with-a-fork-and-knife (bien sûr) French-Swiss version of an American grilled cheese sandwich. For an attractive brunch presentation, bake in individual gratin dishes and serve topped with thin slices of prosciutto and/or a fried egg. (We tried it with a fried egg on top!)

Get the recipe for croûte au fromage.

For an unforgettable appetizer, check out this MyNorth video with Martha Ryan, chef/owner of Martha’s Leelanau Table, as she makes Leelanau Cheese raclette fondue. Click here for the recipe.

Get the January issue of Traverse, Northern Michigan’s Magazine.