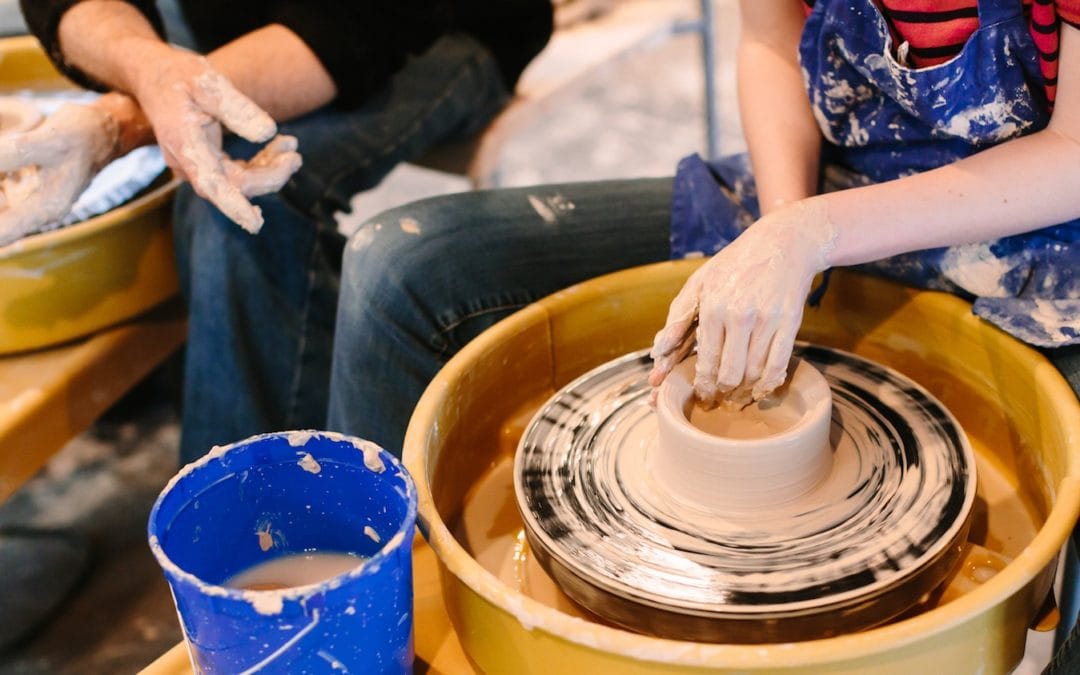 Discovering art. Building community. How one woman’s dream of an arts center for all took flight. This is Blackbird Arts.

This article is featured in the December 2017 issue of Traverse, Northern Michigan’s Magazine. Get your copy!

Is Virginia an artist? “Actually, I have a kind of complicated relationship with that word,” she says. “My mom always told me artists are weird.” As she speaks, she is pulling a small squeegee across a fine-mesh screen covered with ink to leave the imprint of a chrysanthemum on a flattened piece of clay. It’s part of a ceramics project. Virginia describes herself as a homesteader. She makes soap. Has goats and chickens. A BIG garden. She was drawn to Blackbird Arts more in the spirit of a maker than in the spirit of an artist. “I figured I could make pretty ceramic soap dishes to go with my homemade soap and sell them together,” she says. Will she one day embrace the term artist? “I might have to talk to my mom about that.”

Beside Virginia as she works is Jill, a hospice nurse, screen-printing a blue elephant onto a piece of clay. “I almost didn’t come in today,” she says. She was on call last night, she was up much of the night and was tired. But once at Blackbird, the energy of the place and her art infused her. “I’m glad I came,” she says, stepping back to admire her elephant imprint. Is she an artist? “No. I’m a nurse. Science, linear thinking, reasoning.” She puts a hand to her forehead and moves her arm to point straight out, like an arrow. “Here, I turn off that part of my brain and tap into other ideas and the people here, and I let my creativity flow.”

There are dozens more people like this making art at Blackbird Arts community art center. They make art, don’t feel right embracing the title “artist,” and yet they love the discovery that they can, in fact, make art. 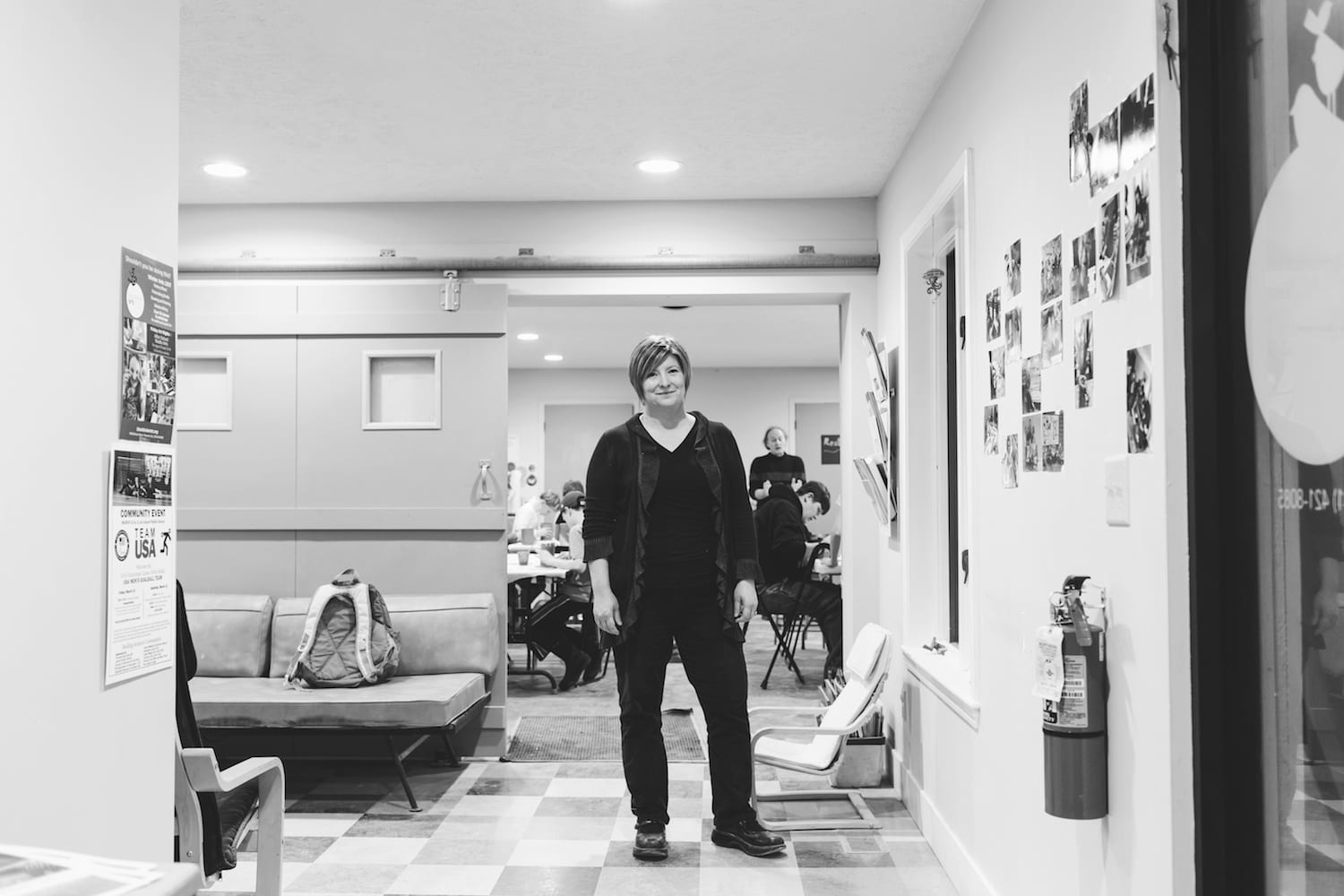 The mastermind behind this place of alchemy that conjures art from non-artists is Melissa Johnson, who founded Blackbird Arts five years ago. “When I look at the original business plan, I almost laugh,” she says. “It’s so removed from what we are now.” That original plan imagined a place where young children could learn music—that was the entirety. Today, there’s barely any music, and instead Blackbird offers classes in ceramics, screen-printing, jewelry, letterpress printing and more, for ages preschool to as old as can be. In addition, Melissa and her team export the programming to schools and community settings, likewise conjuring art from people in places like a school in Wellston, an hour away in the Huron-Manistee National Forest.

Johnson did not start out as an arts educator. She earned a master’s degree in anthropology and worked in archaeology a dozen years before joining the team at Chicago’s Field Museum. “I’d go into the collection and then work with the curators to design an exhibit,” she says. But when she agreed to help a friend in her public school classroom one day, she fell in love with teaching, earned a master’s in education, and hired on as a teacher in the Chicago schools. Three years in, she was feeling burned out. “I got so attached to the kids, and when bad things happened, the emotional burden was really, really difficult for me,” she says. About the same time, her mother passed away and she decided to move with her husband and child back to Traverse City to be near her father.

Up North, she substitute taught, did miscellaneous jobs, but after a period when a few people in her world passed away too young … “they were not done,” she says, “I became more afraid of not trying something and living with that, than trying it and falling flat on my face.” Besides, she desperately missed teaching. 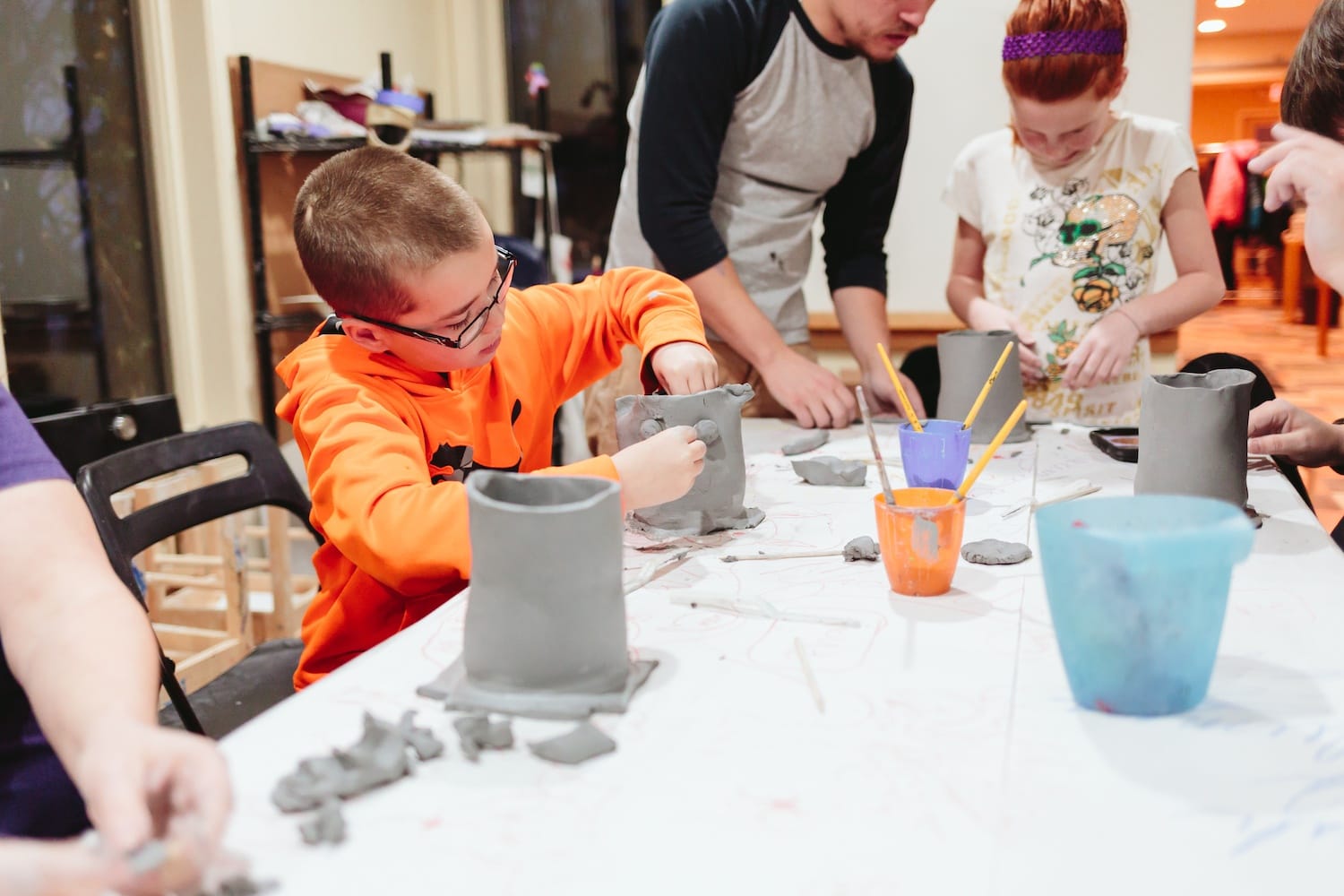 Working with SCORE volunteers, Johnson developed that business plan for the music school and, true to good entrepreneurs, quickly moved beyond it as needed. For the first three years, Johnson ran Blackbird Arts as a for-profit venture, and then switched to nonprofit two years ago. A big motivation for the switch was she wanted to do more outreach to groups like small rural schools or Disability Network or LGBTQ youth, and those groups often had no money to support the classes, so grants were necessary.

You could almost say calling Blackbird Arts an art center doesn’t capture the all of it, because really it’s a community, and the expression of that community is art, and that was Johnson’s plan. “I really wanted to create a hub of community support, a feeling of belonging and connecting where kids felt supported. I never expected it to have that impact with adults, but I see it daily,” Johnson says.

One bit of proof: Initially, when people signed up for an art class the price included 20 hours of studio time—freetime to work as students pleased. But people would just come in and hang out all day. “We stopped tracking studio time,” Johnson says. “Because if you want to be here all day, just be here all day.” 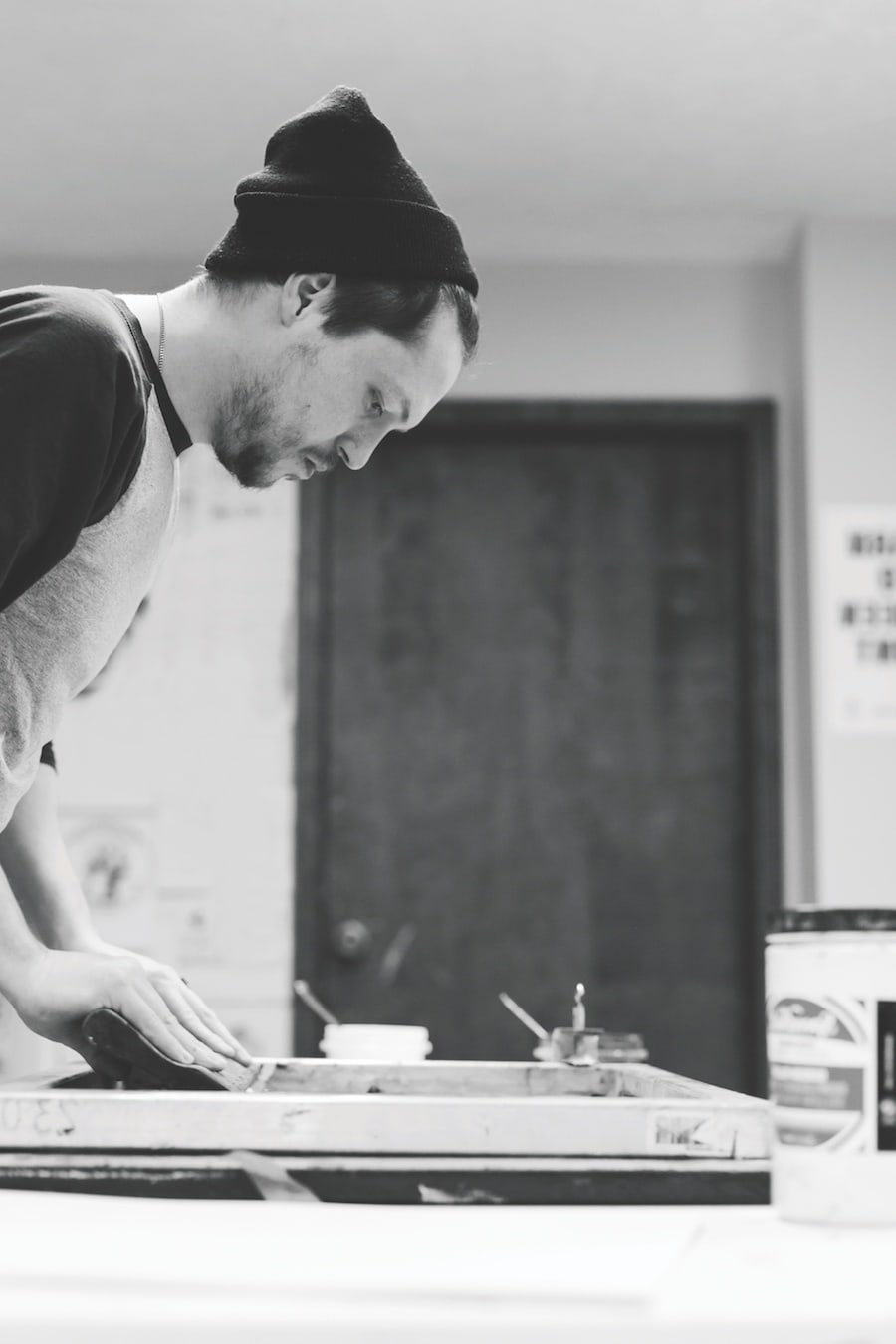 CLAY MAAS was an artist looking for a home when he discovered Blackbird after having recently moved to Traverse City. He began the relationship by offering to do volunteer work in exchange for studio time. He swept up. Washed things. Moved stuff that needed moving. And used his studio time to do screenprinting, letterpress and ceramics.

Clay had been prepared to have a studio of his own, in his house. But the sense of community at Blackbird captivated him. “Here, I can have people looking at my art, giving me feedback, telling me what they think. That’s what I get from Blackbird, I’m pushed to do better,” he says.

He thinks that’s why so many people come to Blackbird every day, if they have a class or not. They just enjoy sharing their art and opinions and different and exciting ideas, and it propels them along a path they love.

An unexpected and inspiring part of Blackbird, for Clay: There are very few people making art here who are trained in art. “We have nurses, physical therapists, accountants … people you wouldn’t think would be interested in art,” Clay says. “You’ll see a retired financial person going all in to make something cool.” 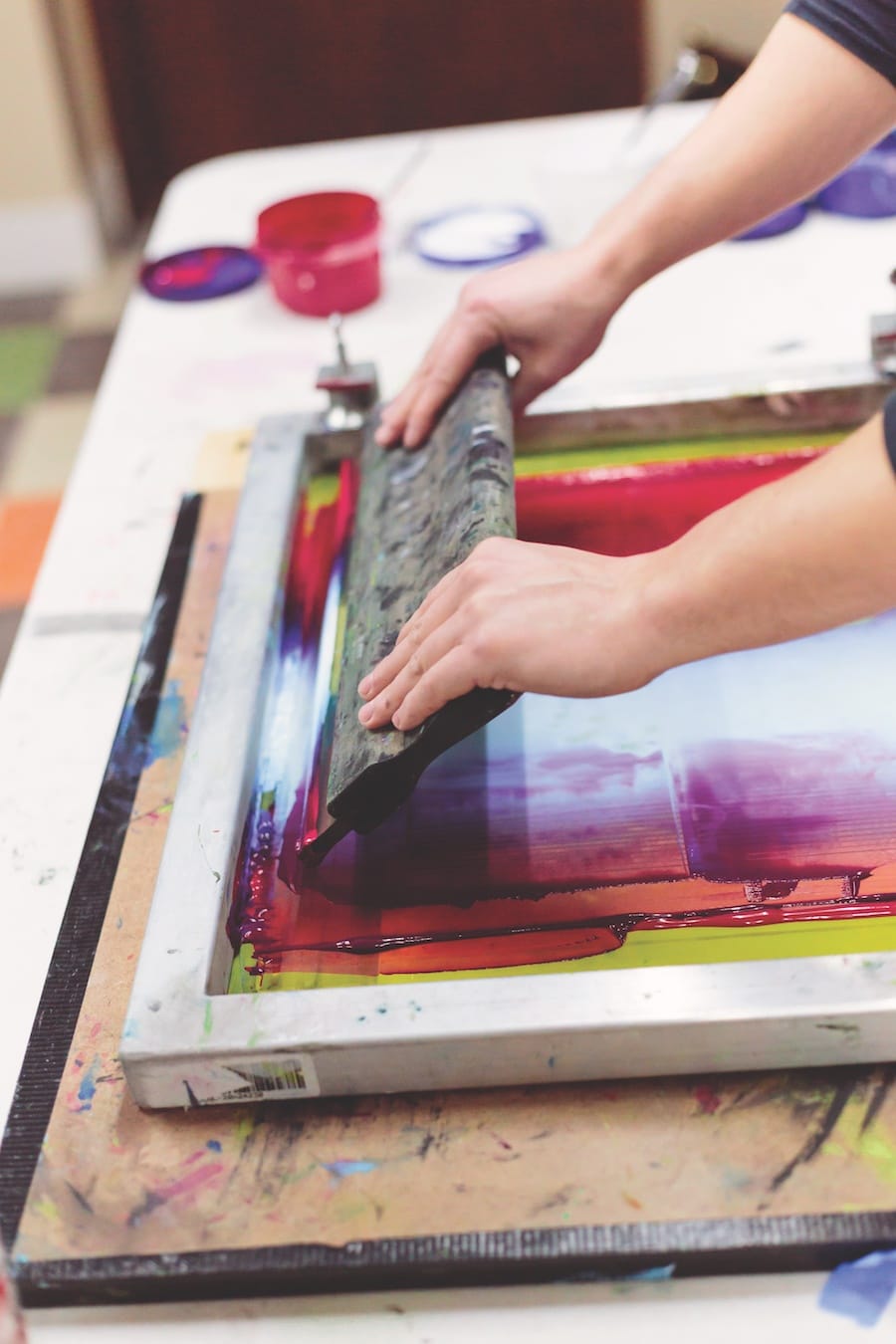 Blackbird’s community outreach is another piece he loves. “People think of Blackbird as what happens in these walls, but we do so much outside these walls,” Clay says. Friday Night Live is a case in point. Blackbird sets up a booth and lets kids (and adults) do a screenprint. “You get this movie-magic moment,” he says, talking about children doing their first screen-print. “We pull the squeegee across the screen a couple times and peel the paper off, and you see their faces light up and it’s like holy cow. They are mesmerized by what they just did.” 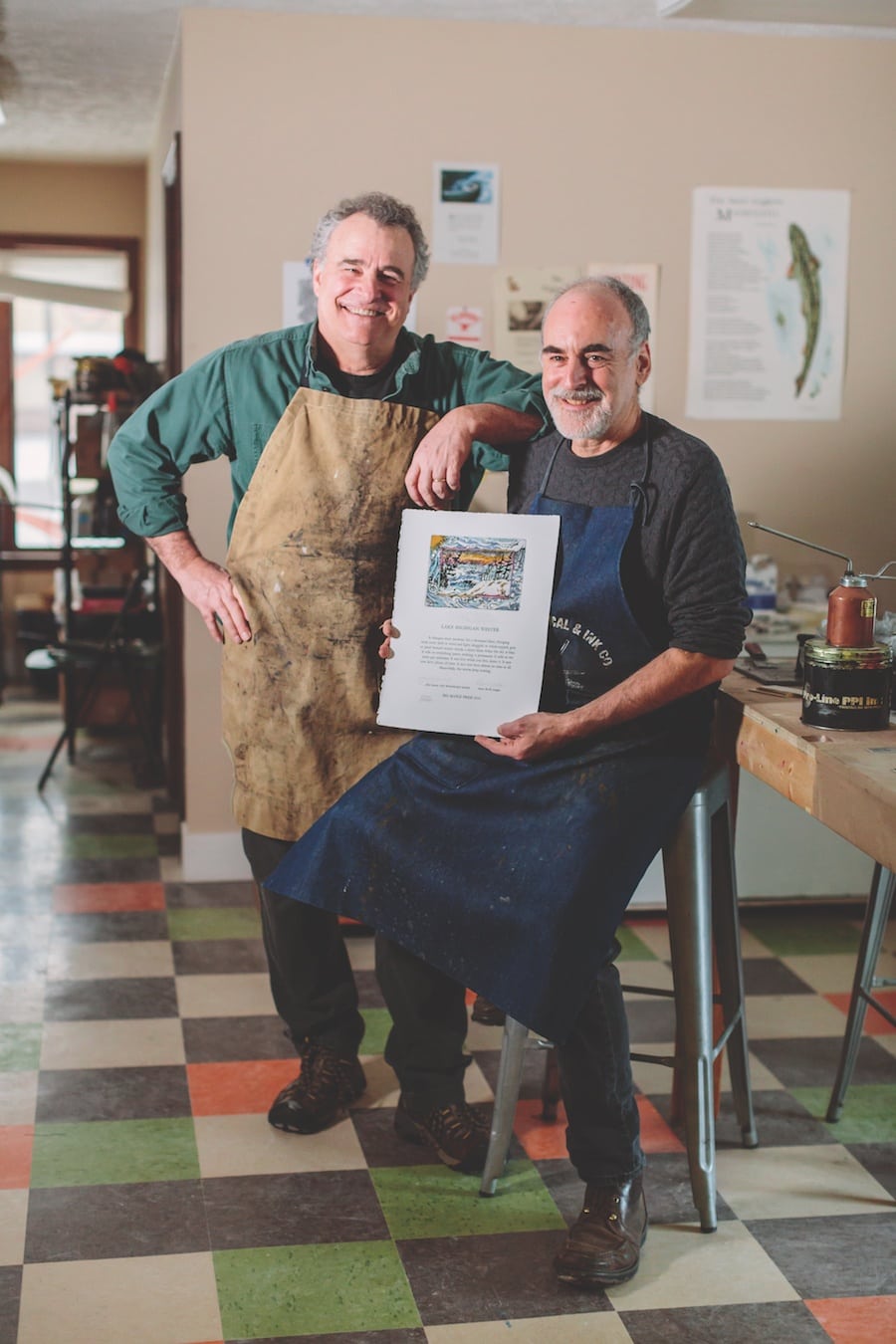 Painter and illustrator GLENN WOLFF and author JERRY DENNIS are among Northern Michigan’s most admired collaboration teams and have produced several award-winning books together since the mid-’80s. But when they signed up for a letterpress class at Blackbird Arts, they were excited by the idea of being novices learning the art form. A bonus was learning from the person who had printed some of the duo’s work, Chad Pastotnik, a nationally renowned letterpress artist who had donated equipment to Blackbird and offered to teach.

Dennis and Wolff intended to make broadsides—a single sheet of paper with a brief bit of writing by Dennis and an image by Wolff.

Watch this MyNorth video for a letterpress demonstration with Chad Pastotnik!

“I really enjoyed working among people instead of sitting in a room alone all day, as I had my whole career,” Dennis says. “And I enjoyed working with my hands. I loved the precision of the letterpress work, the smell of the ink, the sound of the press when you roll it.” 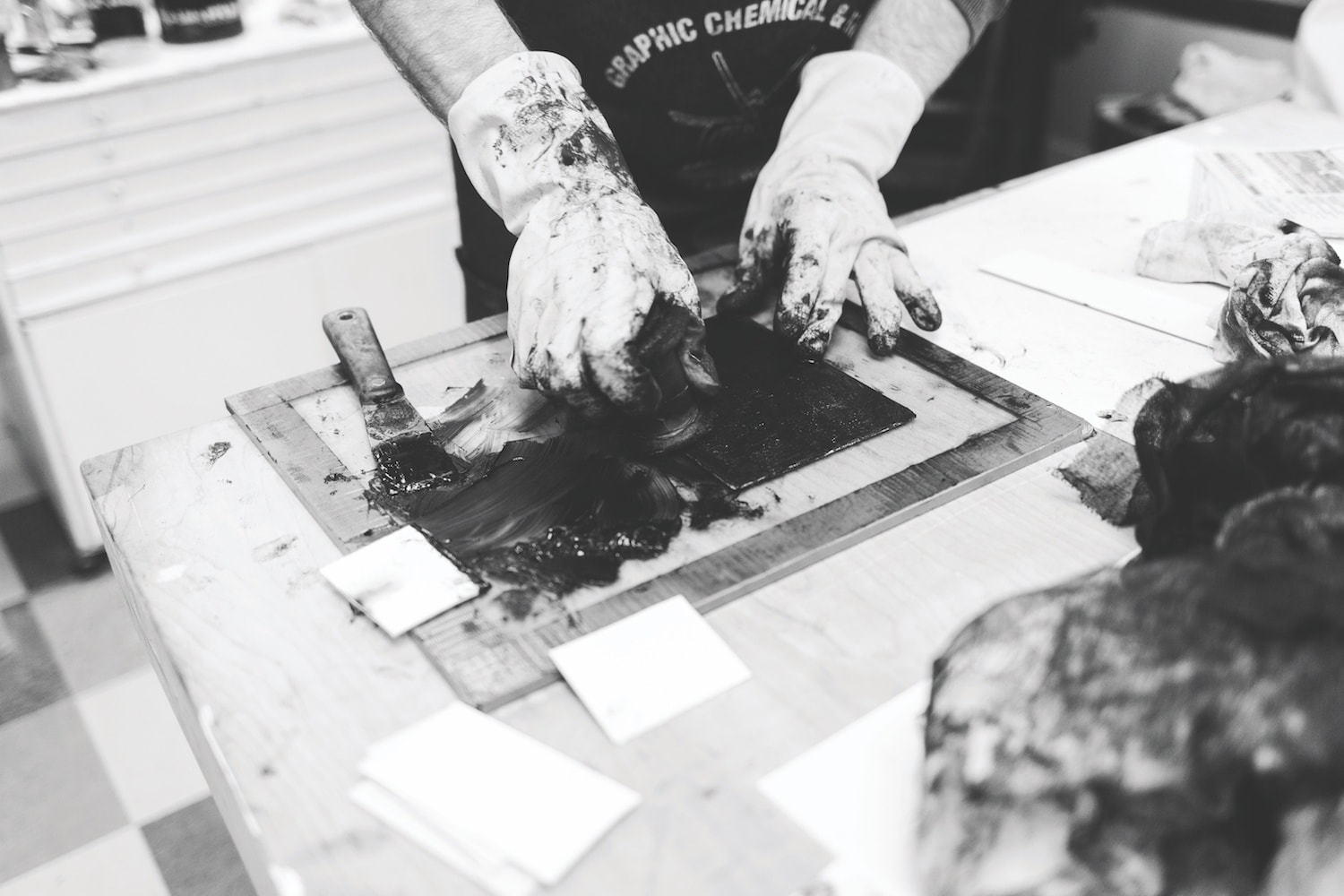 Wolff, who teaches full time at NMC and has taught at Blackbird, appreciates the small classes at Blackbird. “Our letterpress class was four or five people. It allowed us to pick Chad’s brain and gave us that one-on-one mentorship. And, to have an opportunity to work with somebody of Chad’s caliber is like gold. He is off the charts for his reputation and ability.”

The community aspect also resonated with Dennis and Wolff. “It’s an opportunity to work with people who care about art, about making quality things and putting their hearts into it at a time when things are mass produced and doomed to the landfill,” Dennis says. “These things people will keep and cherish. If my kids were young, I’d have them sign up for every class.” 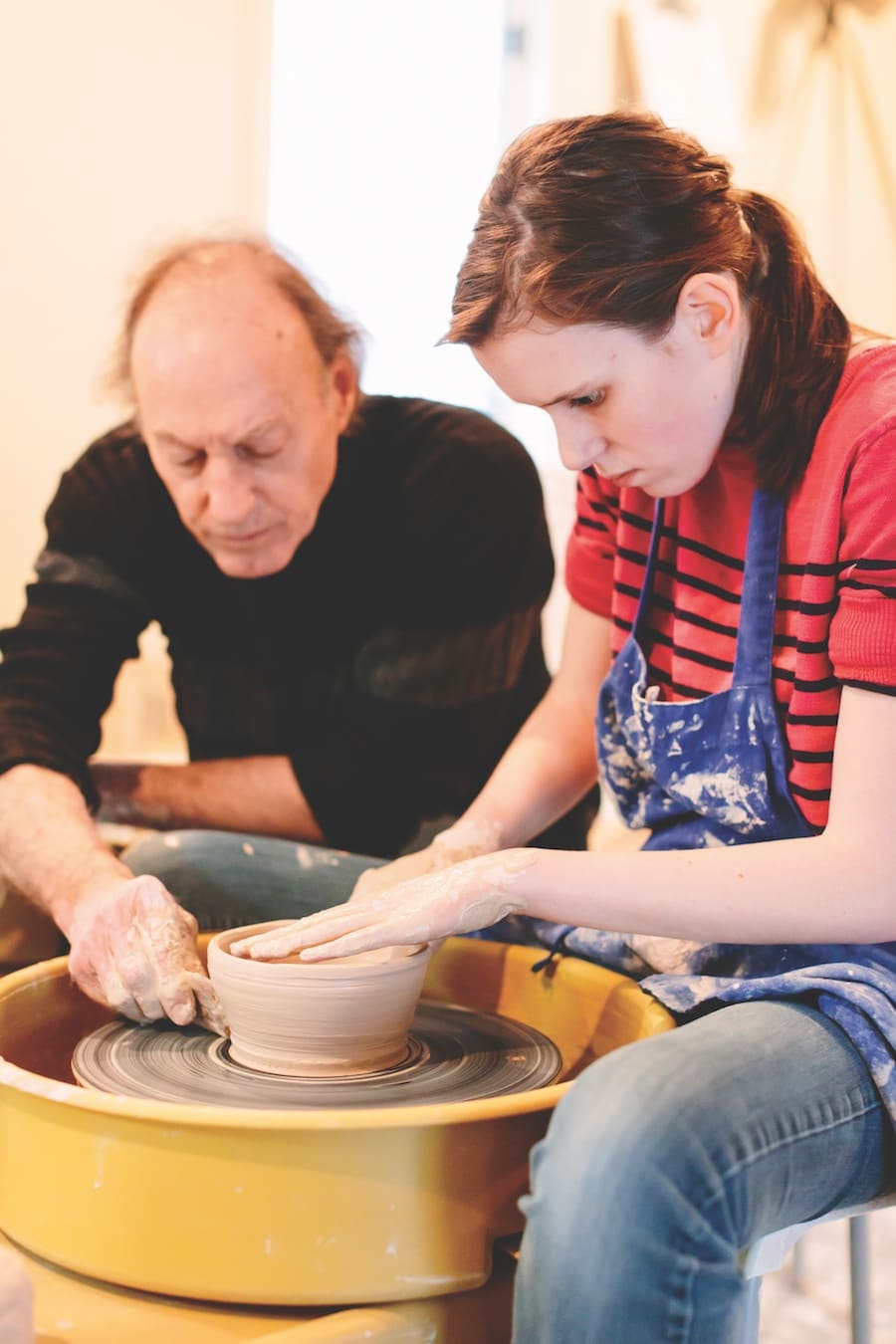 ELLIE MORGAN’S history with Blackbird Arts goes back about three years, to when she was a sophomore in high school. She had been part of a ceramics program in school and was looking for a way to continue to develop her skills in the summer. She signed on to a wheel-throwing class. “I just loved doing ceramics,” Ellie says. “It was a way to express myself in new and creative ways.”

One project that means a lot to her, a teapot she made with her grandpa in a teapot workshop. They built it out of slabs and pressed diamond shapes into the surface for texture on the entire outer surface. Next they applied an orange under-glaze, then wiped it off so the color remained in the cracks, and finally coated it with a clear glaze. “It’s very interesting and nuanced. I think my favorite part is the texture,” she says.

A sense of community and support have been key to drawing Ellie back to Blackbird. “If you need help, somebody is there to help you. If you have a question, they’ll answer it. If you want to try a new thing, they will support you, even if your project is warped and ugly!” she says.

She still has the first “ugly pinch-pot” she ever made at home on her nightstand. “Even if something is ugly, it is beautiful to you because it is your creation.” 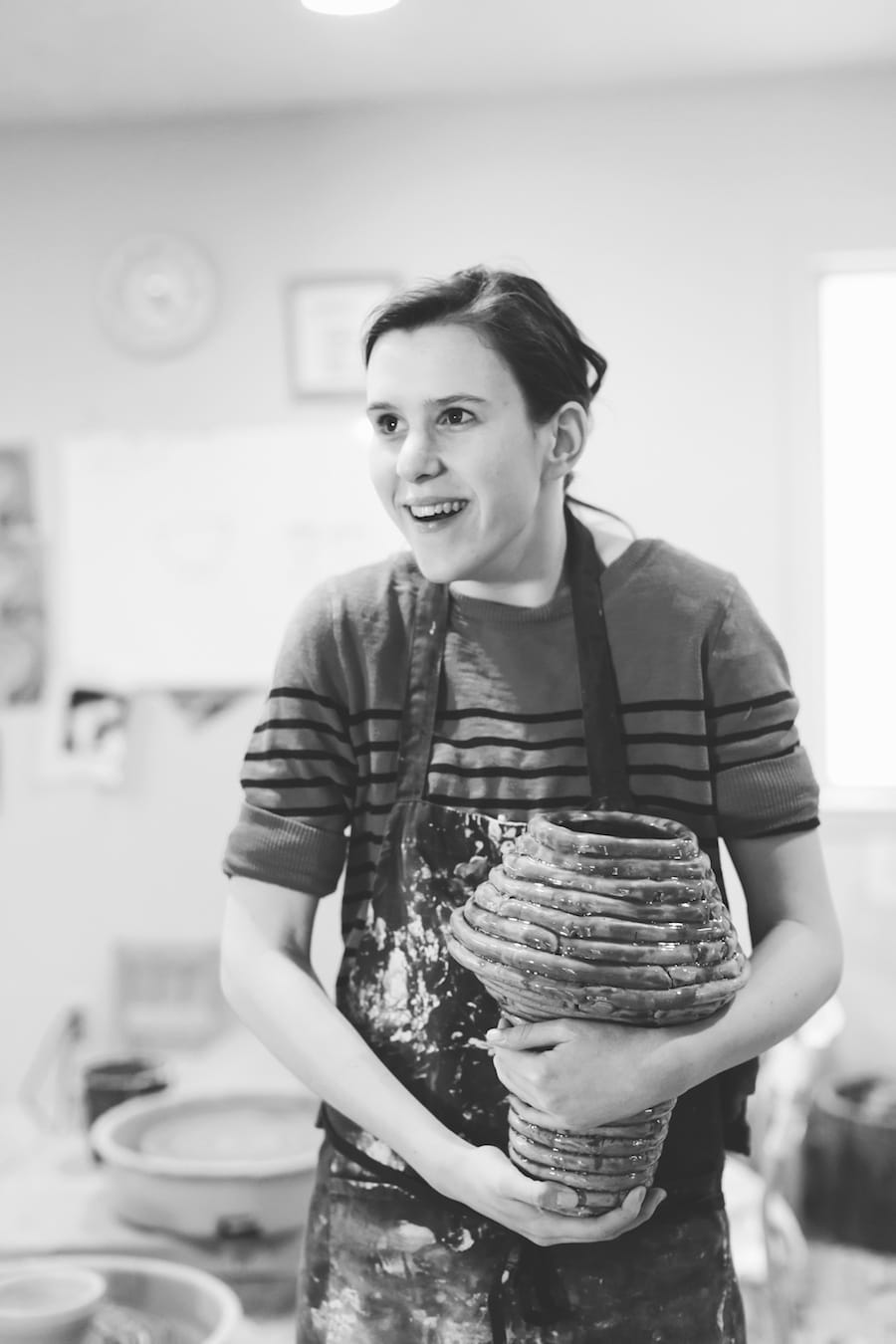 Her advice for non-artists starting out at Blackbird? “I don’t think failure is something you should consider when you look at your art. In art, there is no failure. As long as you put your heart into it and you are willing to take those ugly pieces and laugh at them and put them on your shelf, nobody is going to ridicule you and tell you can’t do it. If they do tell you that, they are liars.”

Ellie is a freshman at Michigan State University, majoring in arts and humanities. She has pursued ceramics as a hobby despite being nearly totally blind.

Jeff Smith is editor of Traverse/MyNorth. [email protected] //
Courtney Kent is one half of The Compass Points Here, a photography and videography company based in Traverse City. thecompasspointshere.com.