Nearly a half-century ago, a group of public and private partners saw the potential of an abandoned railroad corridor in the central Upper Peninsula to become a multiuse recreational trail. Today, supporters are enhancing the value of Michigan’s first rail trail by installing innovative mile markers along the Haywire Grade’s 32-mile route.

A new partnership between the Michigan Department of Natural Resources, the Hiawatha National Forest, the city of Manistique, the Hiawathaland Trail Association and the Schoolcraft County Motorized Trail Association has kicked off plans for a grand 50th-anniversary celebration of the Haywire Grade in 2020 with the installation of mile markers that combine function and historical references along Michigan’s pioneer rail trail. 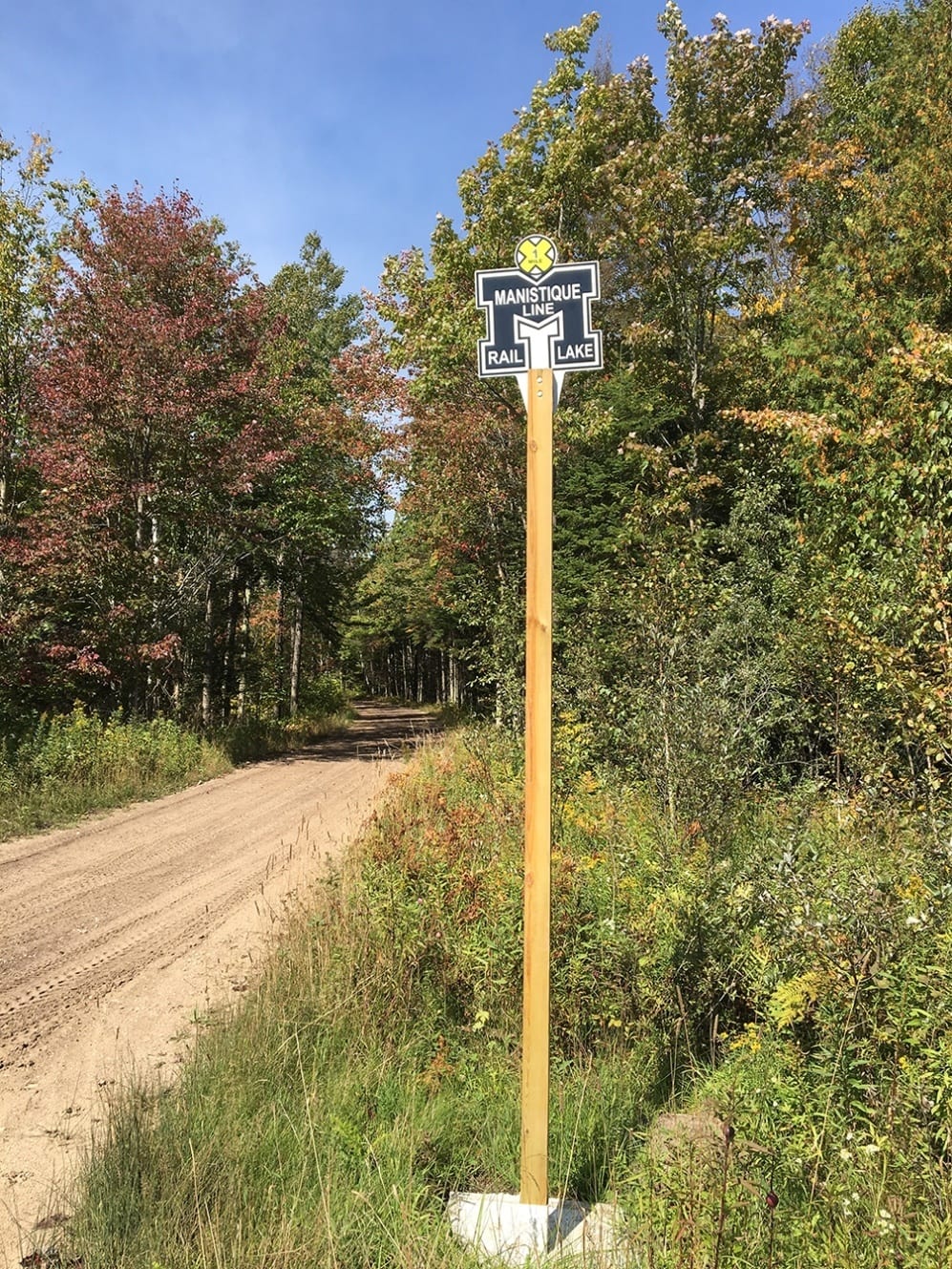 “Centuries of natural and cultural history are embedded within the landscape that trails pass through,” says Dan Spegel, heritage trail coordinator with the DNR’s Michigan History Center. “Uncovering and interpreting this heritage provides context for the surroundings and a greater sense of place, which, in turn, creates a more enriching trail experience.”

Beginning at Intake Park in Manistique, markers have been installed every mile to Shingleton on the east side of the trail. The tall markers each feature the mile number and the historic Manistique and Lake Superior Railroad logo.

“Standing several feet above the trail, the markers are located safely above average snow depth so they don’t get buried in winter,” says Gerry Reese, a longtime volunteer for the Schoolcraft County Motorized Trail Association and Hiawathaland Trail Association.

Few motorized trails in the Upper Peninsula have mile markers. Representatives of other area rail trails have taken note that the Haywire Grade markers—which meet Michigan Department of Transportation standards for nighttime visibility—have improved the trail’s safety by offering important location information for maintenance operations, first responders and others.

Spegel says that work to commemorate the 50th anniversary of the Haywire Grade now turns to the development of 12 interpretive stations that will be placed along the rail trail.

“We want Haywire Grade’s 50th anniversary to acknowledge and celebrate the important milestone for Michigan’s trail network and, at the same time, help trail users interact for years to come with the heritage of this beautiful area,” he says.

Plans are for the interpretive stations to be installed before the first of four commemorative rides in 2020—snowmobile (winter), equestrian (late spring), bicycle (late summer) and ORV/ATV (autumn).

“The U.S. Forest Service is excited to partner with such an enthusiastic team to encourage enjoyment of the national forest and the natural environment,” says Cid Morgan, forest supervisor for Hiawatha National Forest. “This is a great way to promote the historical significance of the area.”

The Haywire Grade rail trail began as the Manistique and Lake Superior Railroad, which operated for almost 60 years between Manistique and the Shingleton-Doty area, until the line was abandoned in 1968. Although converting railroad corridors into trails was a novel concept at the time, Schoolcraft and Alger counties, the Hannah Mining Company, the U.S. Forest Service and the Michigan Department of Natural Resources partnered to make the necessary land acquisitions and Michigan’s first rail trail, the Haywire Grade, debuted in 1970.

Now rail trails are the backbone of Michigan’s ever-expanding trail network, the largest in the nation. They are seen as more than just places to enjoy the outdoors—they also are catalysts for economic growth and valuable transportation corridors.

The Michigan Heritage Trail Program works with communities and organizations to ignite pride, inspire learning and promote preservation by combining local heritage and trails. The MHTP is administered by the Michigan History Center.