His Favorite Lake: Superior. Mine: Michigan. 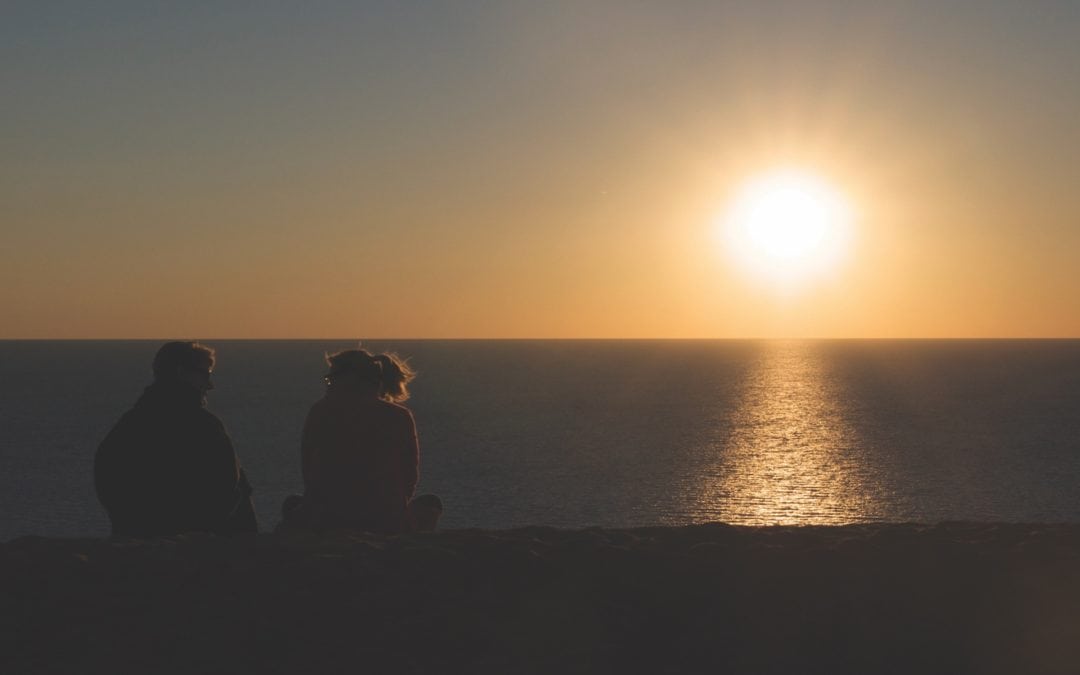 When John and I were near-strangers, in the same master’s writing program in Chicago, he showed up late one night to a Michigan party that my friend and I used to throw for Mitten expats. Looking around, he raised his voice above the Motown soundtrack and told us we were “not that Michigan.” I was not immediately charmed.

See, I am pretty Michigan. My great grandpa, who suffered paralysis on his left side, customized his car with a suicide knob and got the first handicapped taxicab driver’s license in the state. Automotive ingenuity? Pretty Michigan. As a very small child, my grandma and her big brother, Frankie, sat in the empty, seatless back half of a car on the drive to Canada and rode home perched on disguised rum barrels. My family’s roots are here. On my upper arm there’s a tattoo of both peninsulas, from 2001. I got it when I was down there studying on that other side of Lake Michigan, homesick, and young enough that I thought I’d never move back, that writers had to go live in New York to write, and I’d need to carry my home with me. No guy was going to tell me I wasn’t that Michigan.

A couple of years after we talked at that party, each of us were living with our respective parents back home, and oddly, working in the same suburb. I opened the small-town newspaper we sold at the gym café where I worked, and there he was: That jerk who thought he was more Michigan than I was.

The first time we hung out, we made plans to ride horses, to even join a local horseshoe-pitching club. I don’t know why our plans were so horsey. Seven years and two kids later, we have done neither of those things, though we did, one night early on, make out in the park near the pit where the horseshoe club played. (Pretty Michigan?)

One reason John thought he was the most Michigan was his family’s friendship with the writer Jim Harrison. Since coming home to Michigan I’ve learned that within artsy and/or outdoorsy Michigan people, there are many potential suitors who can brag of a connection, no matter how tenuous, to Jim Harrison. It’s just a fact here. Lake Superior is cold, Vernors is sweet, Harrison knew a lot of people and lots of them will tell a girl there’s a character based on them or their dad in a Brown Dog story. We are proud of our notable state artists*.

I have my own inherited connection to Michigan writers—my uncle Jim Gustafson was a poet and journalist. When he visited my folks’ cabin up near Torch Lake, Jim slept in the treehouse built by my dad and his own, Lake Linden-born, dad.

Both of the Jims, Harrison and Gustafson, are pretty Michigan.

We got to know each other, each thinking her or his self more Michigan than the other.

His grandpa worked at Ford’s**.

My grandpa worked at GM.

His dad went to Wayne and was a copy boy at the Free Press in the ’70s.

My mom went to CCS back when it was Arts and Crafts, and she partied at the Grande Ballroom.

His mom’s Greek uncles worked at Detroit Coney Islands; two sets of my grandparents moved downstate from the U.P. for work. Like good Lower Michiganders, everyone vacationed Up North.

I was lucky to have spent my vacations in Frankfort and at Torch Lake. There are great old photos of John’s mom boiling John’s baby bottles over a campfire on a trip north; later Grand Marais, way up there, became one of their family spots.

Everyone we knew downstate worked with the goal of a few breaks a year to come Up North. To fish and hike and celebrate holidays, to exhaust the kids and dogs out in the clean cool air. As we grew up we came up to respect the water when swimming, to sled and cross-country ski and work on disintegrating cabins, to find and wonder at animal bones in the woods and beach glass on the shore.

Sometimes we agree. Rock & Rye is the indisputable best of the Faygos, but he was the one who had fronted a Livonia punk band with a song named after that flavor of pop. We both wanted to use a few days of vacation, when we could have gone anywhere, to drive up to Ishpeming to see where the adaptation of Robert Traver’s Anatomy of a Murder was filmed. We also agreed we should get out of our parents’ basements to give our relationship a chance.

I had a job lined up in Chicago. He had an offer in Manistee. Apartments we looked at in Chicago, one where every wall was painted black, another where you couldn’t stand upright in the mysteriously small shower, were about a grand a month. The large second floor of a house in Manistee, the floor as uneven as anything the Mystery Spot has to offer, was $425 a month, utilities included. We moved up to Manistee together.

We adopted a dog. I ran him on Lake Michigan, John ran him in the woods. I found work. John wanted to hike the distance of the Manistee National Forest and write about it. When he came back I told him I was pregnant.

We still drink cheap beer or Bell’s or Short’s if we are celebrating, and go back and forth over who’s more Michigan.

It’s like fighting over whether a Petoskey stone is more Michigan than an apple blossom. We take pride in our family tales, but really, all of us who love this state and all its variations? It’s not really a competition. We are all the most Michigan.

*Excluding Ted Nugent. I don’t brag about him. **the Midwestern possessive ’s is pretty darn Michigan.