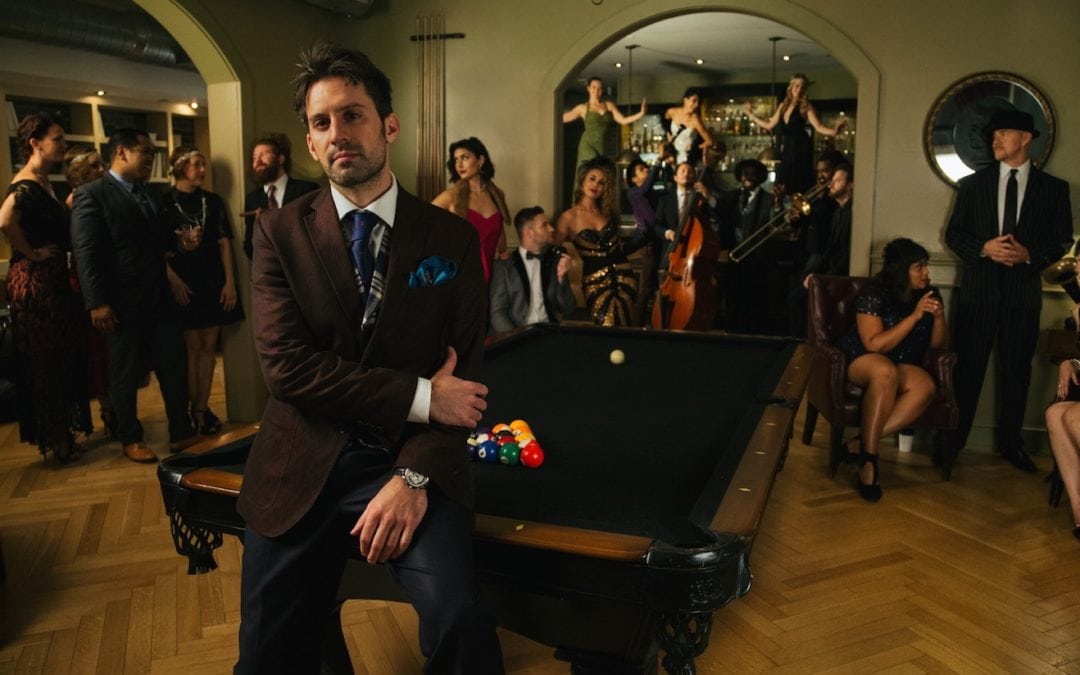 Ever wonder what the Police would have sounded like if they’d been a ragtime band? Or if George Michael had been around in the jazz age? How about Lady Gaga, queen of ’50s doo-wop?

If you answered yes to any of those, or if such imaginative stylings pique your interest, then you’ll want to make sure to see Scott Bradlee’s Postmodern Jukebox. The pianist’s merry band performs at the City Opera House in Traverse City Sunday, October 29.

Maybe merry isn’t the best word. Perhaps wacky, or off-kilter, or eccentric, or brilliant would be better descriptors. Because if you haven’t seen and heard Postmodern Jukebox—PMJ for short—then it’s hard to describe. But let’s try, starting with its origins.

Back in 2010, Scott Bradlee was a college dropout with a piano and several musical friends, though not much else. He invited some of those friends to his basement apartment to record a video for a fresh take on Lady Gaga’s “Paparazzi.” It landed a few thousand views on YouTube and that was that.

Except it wasn’t. Bradlee and his friends continued on in that vein, using the Postmodern Jukebox moniker: “Postmodern” because it broke down some of the walls between genres by blending the old with the new, and “Jukebox” because it focused on pop songs that were familiar to a lot of people. Bradlee and his cohorts even redid the much loved/much hated band Nickelback on A Motown Tribute To Nickelback. But it was the 1930s jazz remake of Macklemore’s “Thrift Shop” that broke the band: rather than a few thousand hits, it generated 100,000 views (and now has more than 14 million views).

Since then, the rotating cast of musicians has toured the country, released a handful of recordings and done more videos. Many, many more videos. A 1930 jazz cover of George Michael’s “Careless Whisper.” A Great Gatsby-ized version of Adele’s “Chasing Pavements.” Men At Work’s “Who Can It Be Now?” redone in a 40s style jazz vein. “Don’t Stop” by Fleetwood Mac done as a N’Awlins blues, “Every Breath You Take” reimagined as a gospel tune, “Sledgehammer” dressed up as vintage ’50s r&b. And it’s not just the songs, it’s the presentations: The band breathes life into the arrangements by dressing the part and playing to the camera.

Vocalist Dani Armstrong was enlisted for a vintage torch song version of “Say It Ain’t So” by Weezer and “Roxanne” by the Police redone as a ’50s rock and roll song, even a rollicking take on Sia’s “Chandelier.” The Detroit native says landing the gig was a “one in a million” shot. “I was singing one song with a band in a lounge and that happened to be when the manager of PMJ was there. By the next night he asked if I’d like to join PMJ,” Armstrong says.

“We travel with four to six singers, a full band with horns and drums, and a tap dancer,” she continues. “We recreate the videos live onstage.”

Interestingly, when she was tapped for the PMJ, Armstrong was singing at the Dave Koz Lounge, partially owned by and named for the smooth jazz saxophonist. Koz himself has made appearances with PMJ, most notably on the aforementioned “Careless Whisper.” He pops up for the song’s luscious sax lines, first on soprano, then alto, finally on tenor. While it’s unlikely he’ll be onstage at the City Opera House, Armstrong says PMJ often enlists surprise performers when on the road.

Coming next month is the band’s first-ever live CD. The New Classics is set for release November 17. It is a companion piece to a PBS special taped live at a Postmodern Jukebox show in Las Vegas, which will air nationally in late November. “The New Classics was all recorded live in front of an audience in the middle of the tour, so everybody got to know each other really well and feel the energy and camaraderie,” says Bradlee in a press release. “Listening to it now, it sounds like an amazing radio broadcast from Carnegie Hall from many years ago—a journey through all the vintage styles, whether it’s 1920s hot jazz or ’50s doo-wop or ’60s soul and everything in between.”

All told, pianist/arranger Bradlee’s novel concept has generated over three million subscriptions to PMJ’s YouTube channel since its 2013 inception, not to mention over 1 million Facebook likes and nearly 850 million views. It’s billed as “grammaphone music in a smartphone world.”

Armstrong says each of the singers does two to four songs with the band, as well as teaming up in various groupings. “There’s one with all the ladies (singing) like the Andrews sisters. Our shows are high energy with crazy shenanigans. Everywhere you look there’s energy and musicality. Our horns have their own show going.”

She says the audiences love it, and they love the audience right back. “It’s like cabaret, being transported back to the ’20s to ’40s. A younger generation is being exposed to something they haven’t been. People who are Lady Gaga fans—it opens their eyes,” she says, noting anyone from 6 to 60 years old and beyond enjoys the show.

The best part for the band? “The people we meet. The fans are all part of the PMJ family,” Armstrong says.  She notes that audience members often dress the part as well, everything from zoot suits to flapper dresses. “We’re going on a trip with the audience. Everyone goes back in time with us.”