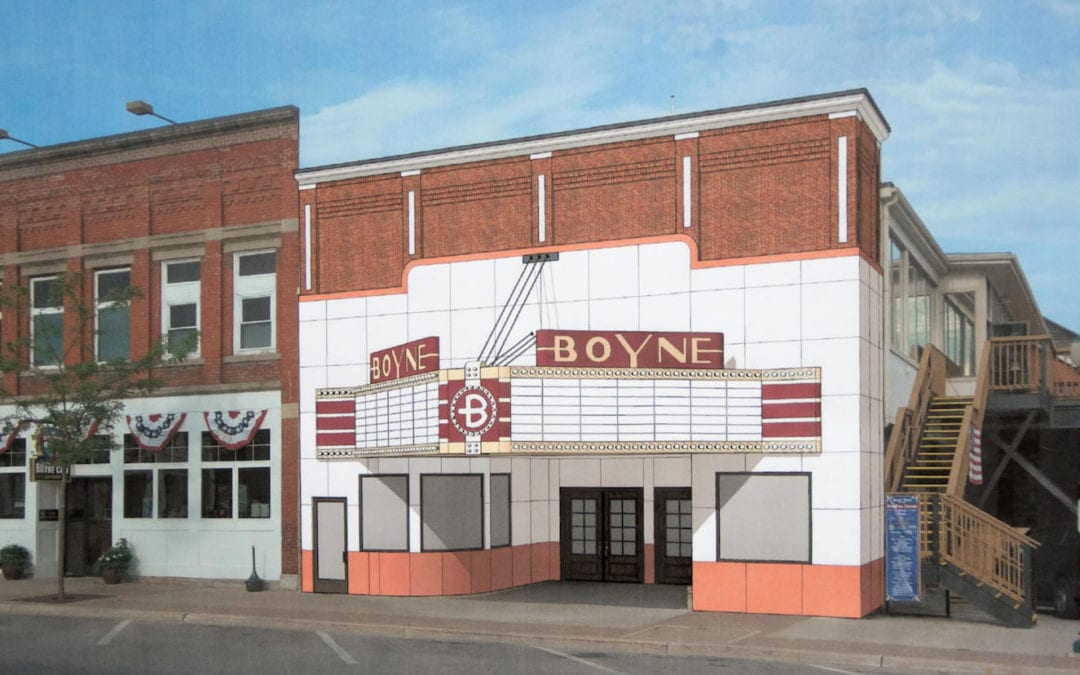 The big screen is often key to a small town. While multiplex cinemas and Imax screens may draw thousands to chain theaters, small towns like Frankfort, Suttons Bay, Elk Rapids, Manistee and others rely on their theaters to keep their downtowns vital.

The Bay in Suttons Bay is a community fixture, hosting movies and occasional music and special events since 1946. The Elk Rapids Cinema opened in September 1940. Both are open year-round, drawing visitors and locals to their respective downtowns. 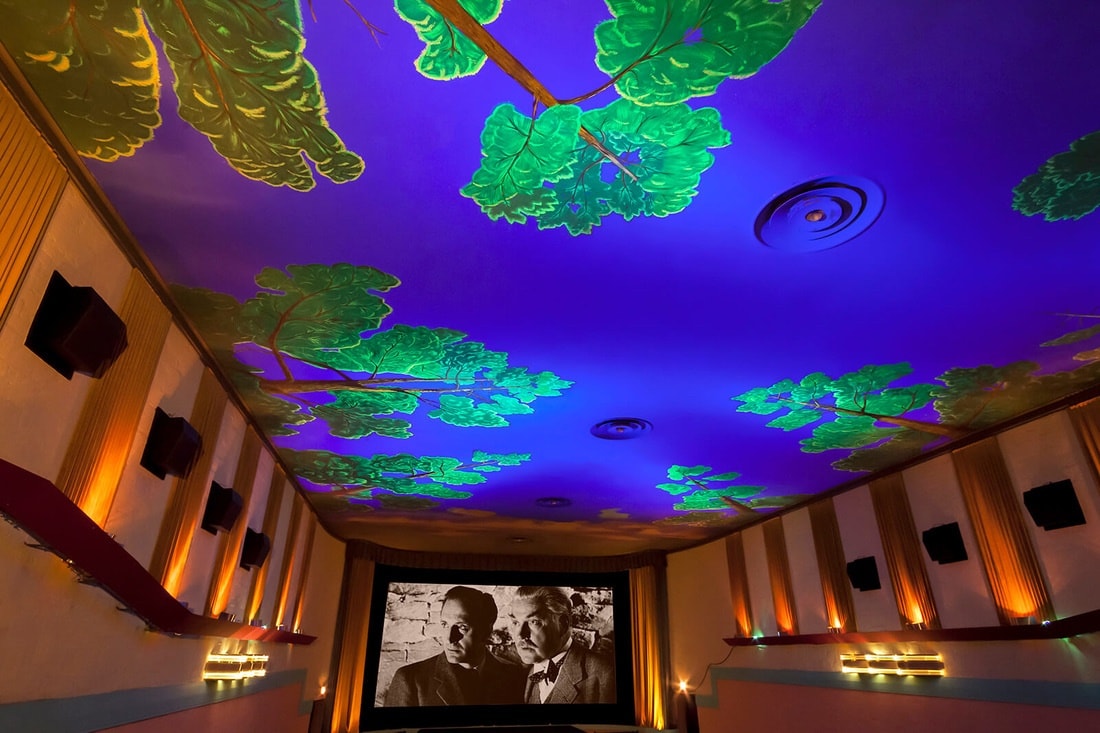 That wasn’t the case in Frankfort. The Garden Theatre was built in 1923 on Frankfort’s main street just a couple blocks from the Lake Michigan beach. But over the decades, it fell into disrepair, and a failed steam boiler heating system meant it could only be open in the summer. With a number of businesses likewise only operating in the summer season, that meant winters were decidedly quiet in the Benzie County town.

In Harbor Springs, they weren’t even that lucky. The downtown Lyric Theatre closed its doors in 1981, leaving the town without its central entertainment venue.

Hope springs eternal. Today both the Garden and the Lyric are showing movies year-round. The former was purchased by two couples, Blake and Marci Brook and Jennie and Rick Schmitt, just in time. “The guy who owned the building planned to turn it into condos,” Rick says.

They enlisted the aid of the community to renovate the theater (including replacing the boiler system) and the Garden is now one of the anchors of downtown, next to Stormcloud Brewing Company, also co-owned by Schmitt. “The renovation of the Garden has been a goosebumps kind of thing. So many people regard it as their own. For us to be the stewards is really touching to see,” Rick says. 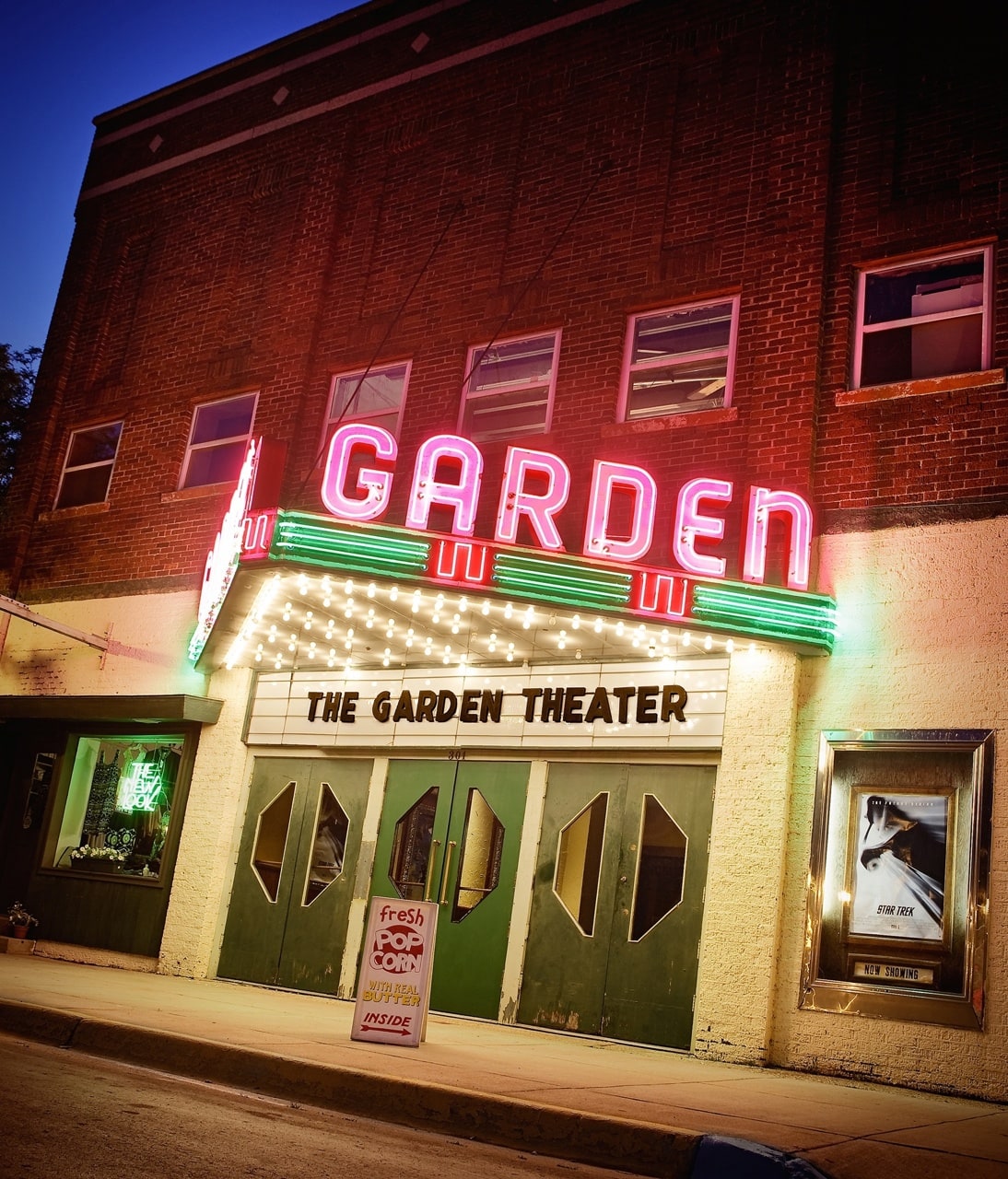 Though it’s not a non-profit, Rick says they don’t really make any money. They make enough to pay three employees and keep it running, but never take any salary themselves. And because it’s not a non-profit, there are no tax breaks for donors. That didn’t stop community members from giving money to the renovation. “People just donated anonymously,” he says. “They want Frankfort to be vibrant and active and have the means to do it.”

Further north, a similar community effort took place in Harbor Springs, where a cadre of citizens banded together to revive the concept of the Lyric. The original Lyric had been refurbished into storefronts, but there was another nearby spot available.

The new Lyric Theater opened in July 2016, and in its first year drew over 50,000 customers. “Rainy days are our friends,” says Scott Langton with a laugh. 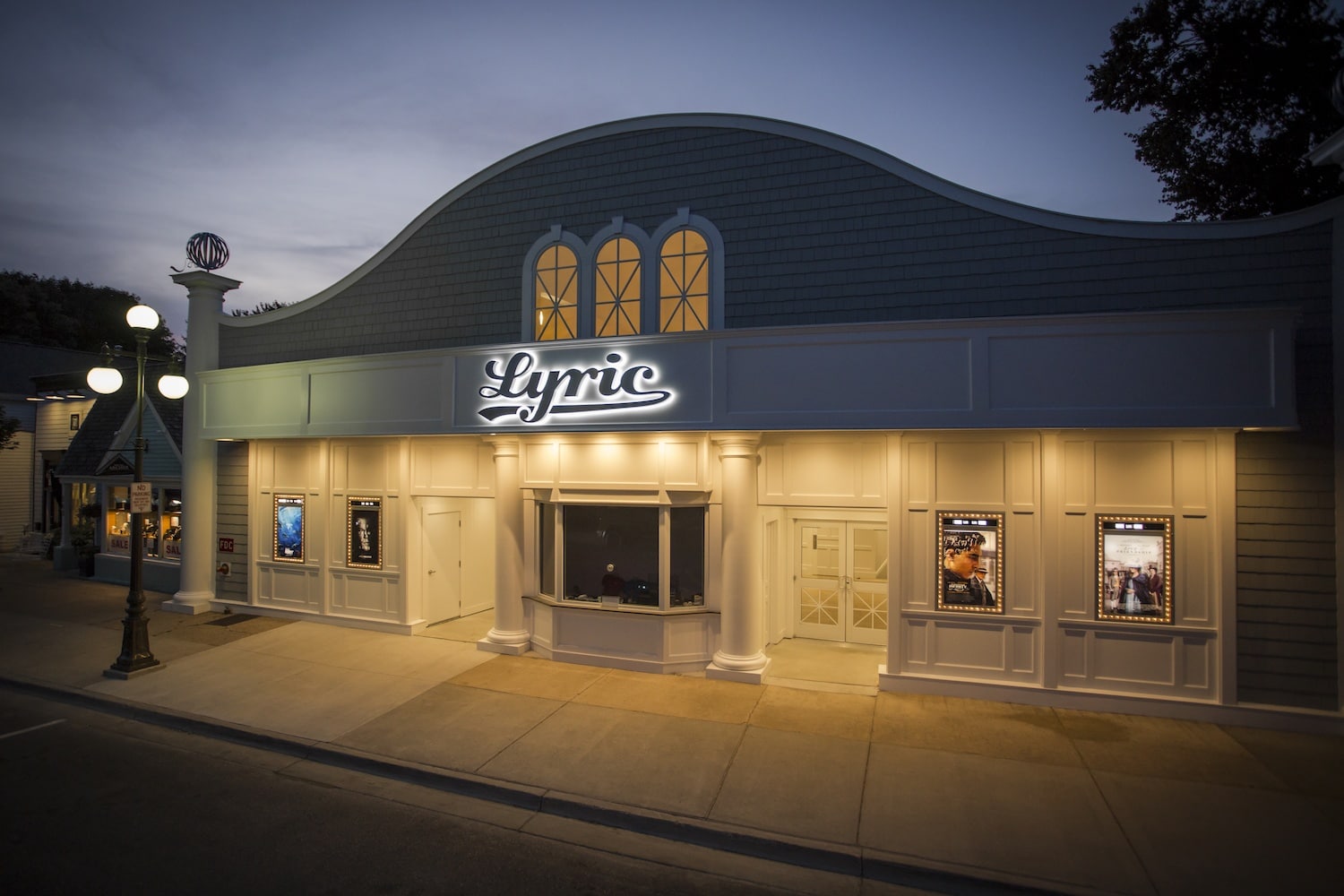 Scott was one of the early supporters, who eventually became the theater manager. “I was one of the organizers who felt it was a good idea. I hadn’t planned to run it, but it happened.”

He says the building was taken down to the studs but notes that because the group was not trying to renovate an existing theater the project didn’t face many of the obstacles others did. “We could do all of it state-of-the-art. That would have been hard to do in renovation.”

The concept for the new Lyric was a bit different than other theaters. Where most small towns opted for a single screen, the Lyric boasts three separate viewing areas. Theatre One has 195 seats, Theatre Three has 39 and Theatre Two is the smallest, with a cozy 22 seats. 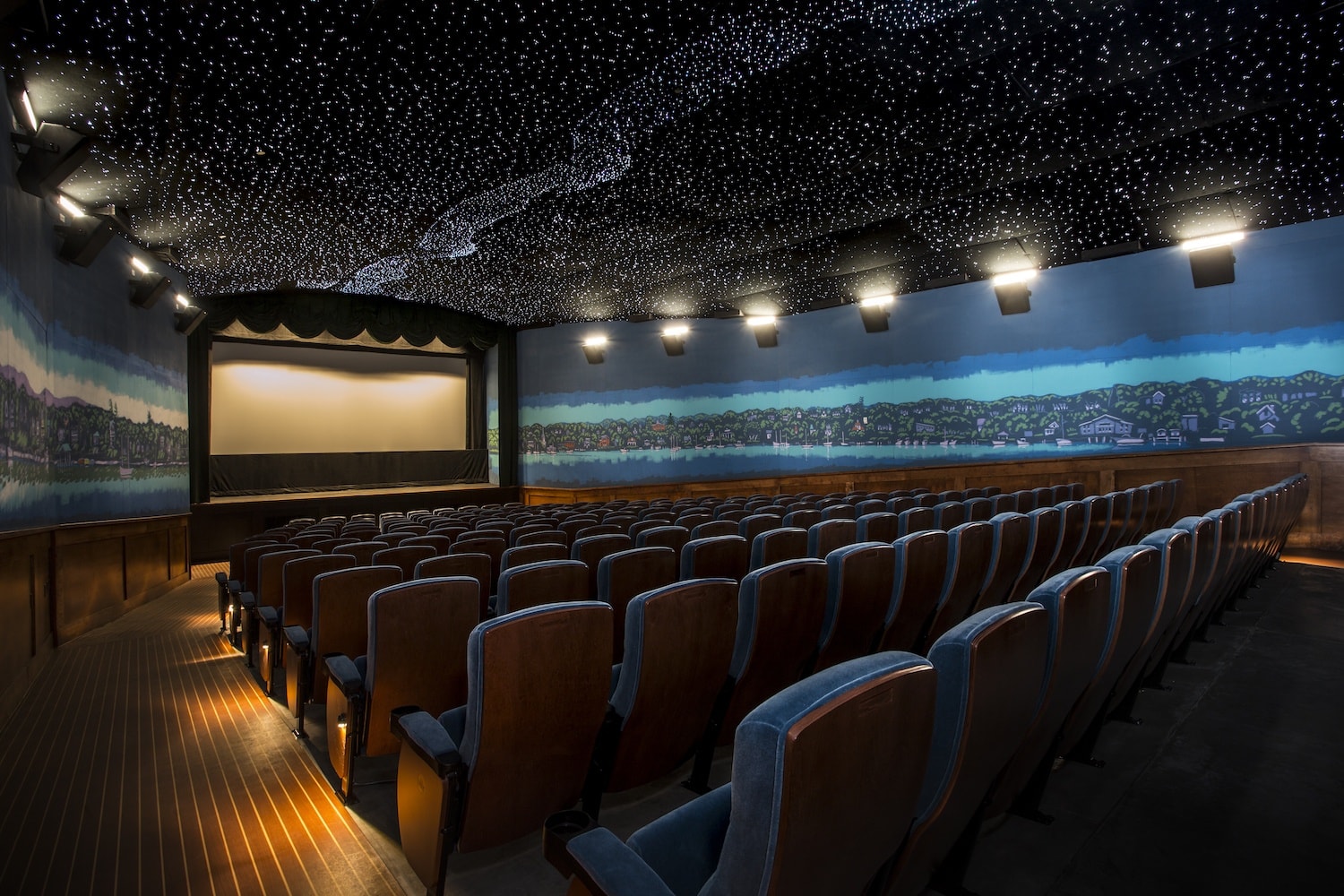 The Garden and the Lyric are examples of the “afters.” The “before” is in downtown Boyne City, where plans are in the offing for the revitalization of another small town theater. The building housing the long-shuttered cinema, including the brewpub located next door, was purchased by Rich Bergmann and partners. Rich, who also owns Lake Charlevoix Brewing and the Bridge Street Tap Room, opened the renamed Boyne City Tap Room in 2016, but the theater is a much longer-term project.

“It’s been abandoned for years,” says Rich of the Boyne. That brings with it a host of challenges when trying to renovate and bring it up to date with current codes, from ADA access to restrooms to egress and fire suppression. And everything comes with a cost, from the architectural work to engineering to the installation of updated sound and projection systems. Rich is exploring numerous means of financing, including Historical Building Tax Credits, Utility Company Incentives, working with Northern Initiatives and seeking PACE financing. He says there’s a lot of work that goes into, as he puts it, “turning this historic theater that had been left to rot into a gem again.”

The planning, engineering, financing and approval processes all have another cost: time. Rich is frustrated with the pace but remains determined to make it work. “My grandfather saw Harry Houdini there. I saw a movie in 1968. The hurdles have slowed the project, but they haven’t changed my commitment.”

That’s welcome news to city leaders and citizens. Ashley Cousens, the executive director of the Boyne City Chamber of Commerce, says a theater draws business to the entire downtown throughout the year, and it’s especially important in the winter. “I came here from upstate New York,” she says, where she witnessed what a downtown theater did for a community there. “I’ve seen the firsthand benefits. That will be huge for businesses to have entertainment on a regular basis.”

That’s echoed across the area, from Suttons Bay to Frankfort, even Traverse City, where the State Theatre helped revitalize the downtown of the region’s largest city. Personnel at the Harbor Springs Chamber of Commerce say the Lyric is an economic engine for the city, and restaurant and shop owners are “thrilled” at the business it brings into the downtown. “A movie theater is a defining element for a small town,” Scott says.