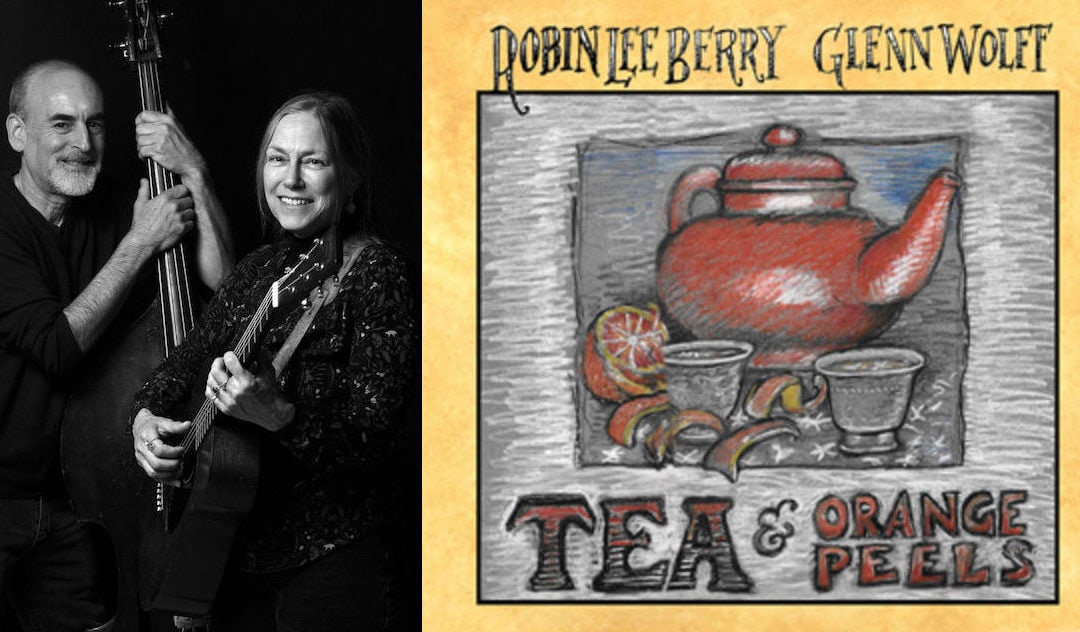 She runs an eclectic gallery with her husband in Boyne City, showcasing their own folk art and furnishings as well as paintings, pottery, jewelry and more.

Ah, but when they get together, the art form changes. Out come the guitars, the bass, even the fiddle. Glenn Wolff and Robin Lee Berry are in their musical element, playing an amalgam of folk and Americana music with a touch of jazz on the side.

The duo is in the final stages of recording their first full-length album together, following the EP Tea & Orange Peels. They hope to have Weave Me A Parachute out soon. The sounds on the recording swell up and down—Berry’s vocals, occasionally multitracked and/or leavened with other voices, interwoven with guitar, slide guitar, dobro, violin, percussion, accordion—even train whistles on “Station Agent.” 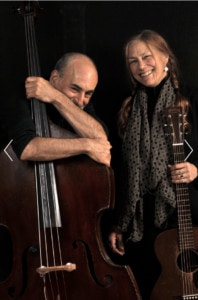 The two first met several years ago. “Don Julin introduced us when I recorded my first album at Don’s studio,” Berry says. “When I started playing again, his name came up. We pulled him in for ‘Hey Baby Hey’.” (“Hey Baby Hey” is Berry’s track on the Greg Brown tribute CD Going Driftless).

Berry has been a familiar face throughout the region for years as a solo singer/songwriter. Today the duo is in demand across the area, from house concerts to restaurants to clubs. “It’s fun to play together. She lets me bring a lot to the table,” Wolff says.

Berry sings and plays guitar while Wolff provides a bottom end on bass or adds other colors on slide guitar and dobro. “It expands the sound a lot, especially outdoors,” Berry says. “The bass is the foundation, and (he adds) a lot of other instruments. That’s a whole new world.” It also allows Berry more instrumental freedom. For example, in the middle of a song she can step away from the mic and exchange her guitar for violin without the music abruptly ending.

Wolff enjoys it when that happens. “I always leave a hole for her to play a fiddle solo. It’s a secret way for me to get her to play.

“What I love about Robin is she can take a cover and reinvent it. Like ‘Into the Mystic’ by Van Morrison. She’s really good at open tunings (on guitar), and doing Joni Mitchell things, she’s a natural. She could do a set of Joni Mitchell, then pull out something like the old Argent song ‘Hold Your Head Up,’ totally reinvented.”

That’s one side of their music. The other is the original tunes they do, which includes co-writing songs on the upcoming recording. “(Berry) does unique covers but it’s really about her songwriting and storytelling,” Wolff says. “She really goes deep.”

Their songwriting collaborations may begin with a riff or melody that Wolff picks out on guitar. “Then I beg her for lyrics,” he says.

“He’ll throw things out, I’ll make a melody,” Berry adds. “It’s a collaboration. He has a very sophisticated ear.”

The two work well together, both onstage and off. “Our egos are pretty compatible,” Berry says. “We don’t hurt each other’s feelings, we don’t battle. With the bass, it can go more to rock and roll, expand our ability to play jazz, a cross-genre way to interpret the tunes.”

With that in mind, Berry says she thinks it’s hard to define their style and their music. “I don’t think it’s really folk music. It’s different than Judy Collins, but there’s a chorus and (you) can sing along.”

Wolff is also the bassist for Jazz North, and Berry often sings with the band. That influence extends to their own efforts, as the band’s drummer Dave Goodwin has become a third member of their group, with Jazz North guitarist Angelo Meli about to join the fray as well.

Following a busy summer, the two have put the brakes on live performance for the most part while they finish their recording. Depending on one’s own listening preferences, you can hear echoes of everything from Chris Smither to Celtic music like Capercaillie to—well, you can decide for yourself when Weave Me a Parachute debuts.