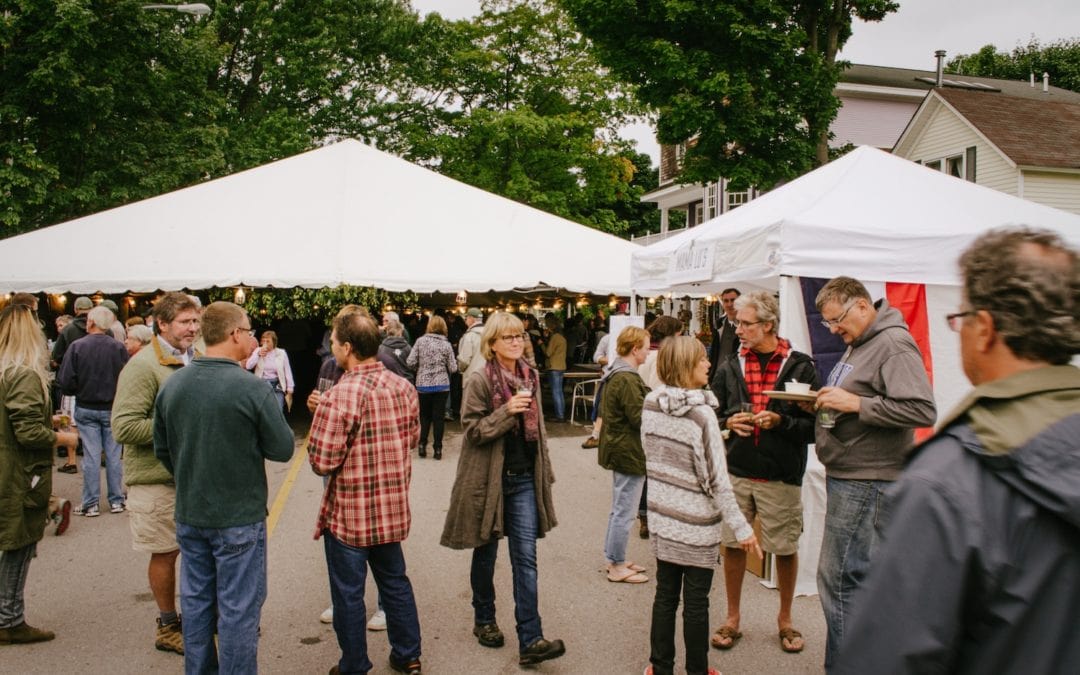 The Empire Hops Festival is no more. But don’t despair beer enthusiasts, it’s expanded into the Empire Hops and Harvest Festival, emphasizing the connection between beer and foodstuffs. 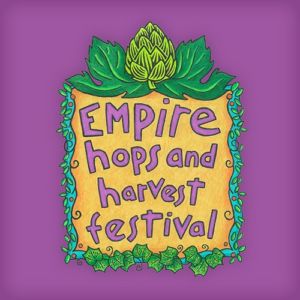 Ten area breweries will be joined by a similar number of food purveyors, allowing attendees to mix and match to their heart’s content. Maybe a brew from Right Brain and a taco from Mama Lu’s. Or a slice from Rocco’s Old World Pizzeria paired with suds from Creston Brewery. “It’s not your normal beer festival. The food component is equal,” says Paul Skinner, one of the organizers.

It’s meant to keep people coming to the festival, which takes place Saturday, October 7 in the big tent situated in the middle of the cozy confines of the southern Leelanau County town. Complementing the food and drink is music during the daylong event. Jack Pine, 5th Gear, Brotha James, and Kirk Jones and the Benzie Playboys provide the background sounds, ranging from rock to indie to Cajun and more.

While the music will entertain patrons, the focus is squarely on the brewers and food purveyors. Among the breweries on tap for the event will be Storm Cloud Brewing Company, Right Brain Brewery, Lake Ann Brewing Company, the Workshop Brewing Company, the Filling Station, North Peak/Nomad Cider, Black Star Farms which will supply wine, Acoustic Mead, St. Ambrose Cellars, and Creston Brewery. For kids, the festival is offering, for the first time, a soda bar from Northwoods Soda. Food purveyors include Art’s Tavern, Dickey’s BBQ Pit, Mama Lu’s, Pleva’s, Nepalese Have Another, Rocco’s old World Pizzeria, Scalawag’s Whitefish and Chips, Shipwreck Café and Deering’s Market.

This is the fourth year for the festival, which continues to grow. “The first one, we had about a thousand people. The next year it was about 1,200. We’re expecting north of 1,500 this year,” Skinner says. “We hope to grow the crowd.” 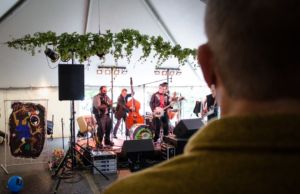 The event is a cooperative effort between the Empire Chamber of Commerce, which Skinner chairs, and Bay Area Recycling for Charities, with help from Taste the Local Difference and MI Local Hops; proceeds from both the Empire Hops and Harvest Festival and the Asparagus Festival support the Chamber of Commerce. Andy Gale of BARC says the emphasis on recyclable and compostable materials pays off in it being almost a zero-waste event. “Two thousand people come through, and we’ll have maybe a half bag of garbage—usually not that much,” he says.

BARC partners with the event not only for the recycling and composting, but also on the front end, pulling the necessary licenses for the festival. “As a non-profit, you can get up to 12 liquor licenses per year (from the state). We realized no one else was doing it, and that’s how we got started nine years ago.”

Skinner says the festival provides a great way for Empire to close the festival season, which kicks off in the spring with the Empire Asparagus Festival. “Asparagus is the first crop, and that makes us the first festival. We’d been looking for something to bookend it, and then Wiesens started growing hops.”

The burgeoning interest in the crop saw it mushroom from 5 acres to 250 acres being grown nearby in just a few years. “So what better way to bring people in when they wouldn’t be here otherwise,” Skinner says.

He also believes the small-town atmosphere of both events makes them perfect for all ages. “The Asparagus Festival … has a family theme. I see no reason the Hops and Harvest Festival can’t have the same slant.”

The fact that the hops harvest has just taken place also makes the festival attractive. “One thing I really like is it’s one of the few times brewers can get their hands on wet hops,” Skinner says. “They can brew with green hops, which makes a huge difference. Wet-hopped beers have interesting flavors. That’s another great plus.”

He’s hopeful that it will continue to grow, perhaps even expanding to a Friday–Saturday event. “The infrastructure is here. It would be sensible to use it. We’ll look at that,” Skinner says.

The festival runs from noon to 10 p.m. Admission is $15, which includes a commemorative glass and drink ticket. Additional drink tickets and food are available for purchase; kids under 16 are free. Get your tickets online at MyNorthTickets.com, or call 800.836.0717.

More on the Craft Beer Scene