Grow a Backyard Orchard and Berry Patch: Advice From the Queen, Stella Otto From our fruit-blessed realm, there arose a woman with a helpful idea: write books so everyday people can grow fruit like experts. Meet Stella Otto, author of The Backyard Orchardist, and the hero of gardeners nationwide.

This article is featured in the October 2017 issue of Traverse, Northern Michigan’s Magazine. Get your copy! 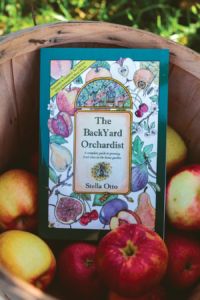 In the farming world, they call it “the Northern Michigan fruit belt”—the hilly, sandy-loam counties that rim Lake Michigan from Manistee to Antrim—and to really grasp what that title means, you must turn off the main highways and trace the backroads, the county roads, the gravel roads. Drive slowly. Take in the landscape.

Every ridge you crest, every road-bend you round, some kind of orchard fills your view. Row upon row upon row of fruit trees lace across the land, dozens of varieties of apples, tart cherries, sweet cherries, pears, peaches, plums. Where the trees open up, you’re apt to see acres filled with vineyard grapes, likewise trellised in perfect rows strung over the hills, or if not grapes, berry patches—blueberries, strawberries, a couple dozen varieties of raspberries. You might end the day thinking, It might be fun to have a few fruit trees in the backyard, heck, maybe a half-dozen, and maybe a berry patch … 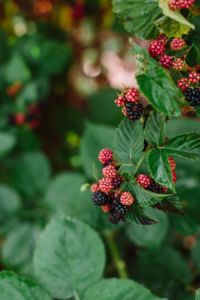 With such a ground zero fruit nation sensibility, is it any wonder that this land would give rise to an idea, or rather, a person with an idea, to put the skills of fruit farmers into the hands of the masses? Not enough skill to run 80 acres of apples, mind you, but enough skill to plant a half-dozen fruit trees and a berry patch and grow delicious fruit as a hobbyist. Well, that person is Leelanau County’s Stella Otto, and her idea came to life in two books—The Backyard Orchardist and The Backyard Berry Book—that have become nearly holy texts of backyard fruit growers nationwide. 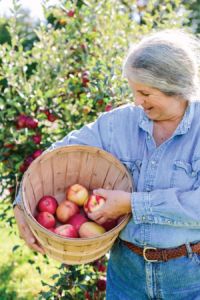 On an early fall afternoon, I drive out to Stella’s house to learn more about these books that are such an expression of this fruit-bountiful place. A thunderstorm has just blown through. Cumulonimbus clouds tower to the east, and everything glistens from the just-finished downpour. Stella opens the door and I ask her about three small trees growing on her now hot and sunny stoop. “Fig trees,” she says. “They’re Mediterranean, so they love the heat and the sunshine.” I like that the woman who wrote The Backyard Orchardist has fig trees growing on her porch.

“Should we go to the berry patch?” Stella asks. We head into her backyard, the smell of thyme growing between the patio blocks rises pungently on the post-storm humidity. Stella’s berries are completely enclosed in a mesh net, top and sides, to keep the birds out. She calls it “the cage.” Though the garden patch is not large—40 feet by 60 feet—it grows 10 varieties of berries, six varieties of grapes and one variety of kiwi fruit. The raspberry canes rise three feet above Stella’s head. They bend with the weight of the satiny black and red berries. “Watch it! There’s a bald-faced hornet there. Not nice,” she says. Stella, by the way, does not have a backyard orchard because her husband manages commercial scale orchards and they don’t need more tree fruit. 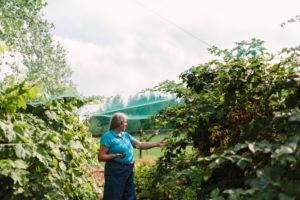 We tend to think of autumn as harvest season, not planting season, but Stella counsels that now is the ideal time, the best time, to think about the planting season ahead. “What happens is, in spring, people go into the garden store and see everything and get all excited and say, ‘I’ll take this tree and this tree and that tree,’ and they take them home and plant them in an unprepared soil,” she says. To ensure a successful spring planting, now is the time to test your soil and make whatever adjustments are needed for what you will plant, so the soil is ready to nourish plantings next spring. Also, eliminate the weed competition. “That’s the most common reason for failure—competition for water and nutrients,” Stella says.

Stella plucks a small pinkish grape. “This is a Reliance grape, one of my favorites,” she says. She hands it to me, and when I bite into it, a wild spectrum of flavors, from honey sweet to citrusy tart, fills my mouth. I definitely want this in my backyard. 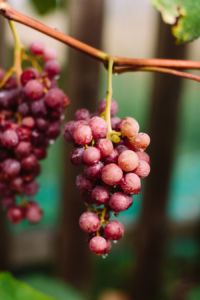 Stella grew up in Massachusetts and attended Michigan State University, graduating with a degree in horticulture and fruit production. She met her husband, Francis, there, and after college both found jobs in Antrim County. But they wanted to own their own farm, and when they learned of an 80-acre spread near the Antrim-Charlevoix county line that was being sold by an elderly widow, they secured farm loans and bought it. The year was 1980. The place had 10 acres of pears, 30 acres of classic apple trees. “They were 30 feet high, and they hadn’t been pruned in years,” Stella says.

She and Francis were in their early 20s, and they set to work, hard. They pruned the trees, planted more. They added another 40 acres to their farm and ran a farm stand. But then, 10 years in, the ripple of Reaganomics reached their farm. The kind of loans they were relying on to operate vanished, and federal loan managers told them to borrow on the open market. “We looked at the interest rates tripling, and the numbers just didn’t add up,” Stella says. They had to leave that dream behind. “Life can be crap, but you always have choices,” she says.

The choice they made was to move to Benzie County (Leelanau came later), where Francis found work nearby as an orchard manager, and Stella signed on to sell for a Frankfort print shop. The publisher also asked her to write some articles for a new tourist publication. 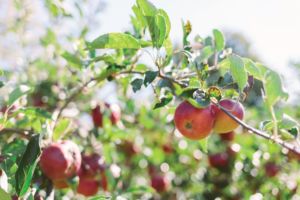 In winter of 1991 she attended a meeting of a Traverse City writers group and the presenter said something that changed Stella’s life. “He said gardening books and how-to books are selling well right now. And BINGO! The idea came to me,” Stella says. On the drive home that night she thought about chapters for The Backyard Orchardist. “By the time I got home, I had the whole book figured out,” she says. She simply thought back to all those questions people had asked her when she ran the farm market, all the questions students had asked her when she taught classes at North Central Michigan College. “It was all in my head,” she says.

Putting her streak of independence on display, she not only wrote the book, but also she laid it out and published it herself. “I had been in business for over 10 years as a farmer and with a market,” she says. “To be honest, I never even seriously considered finding a publisher. I just thought the market needs this, I will make it and sell it.” When the book came out, she won Best Book From a New Publisher from a prestigious publisher organization, landed a deal with a top garden book distributor, and when readers kept asking for a berry book, she wrote one for them, too. For a while in the early aughts, Stella even appeared several times as a guest on a Discovery Channel gardening show filmed in Philadelphia. Now, nearly a quarter century down the path, with more than 80,000 copies of The Backyard Orchardist sold, Stella Otto remains the doyenne of backyard fruit trees and berry patches, a position reinforced with the recent release of a revised edition of The Backyard Orchardist—which won another Gold Award from the Independent Book Publishers Association.

What made the books work? “People who think growing fruit is too technical can read this and see it’s not too technical,” Stella says, in her plain truth way. Above her, the raspberry canes arc. A white butterfly bumps up against the berry cage roof. A bumblebee prowls a leaf nearby. I consider again the lucky convergence of Leelanau County and Stella. I pick another delicious Reliance grape. And then another. I wonder about the soil and the sun back at my house and the fruits that could grow there. 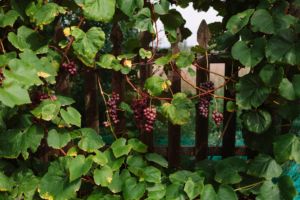 The Backyard Orchardist is laced throughout with display quotes titled “Rules of Thumb”—mini pieces of advice and who-knew tips that can improve your odds of fruit tree success. Here are a few to keep in mind. 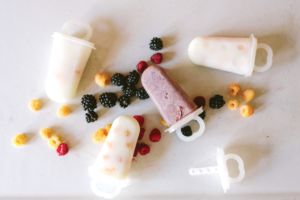 RECIPE TO SHARE: Fruit Yogurt Popsicle
Mix vanilla and honey into plain yogurt (to your taste). Add in frozen berries of your choice. Spoon into popsicle forms. Freeze.

Jeff Smith is editor of Traverse/MyNorth. [email protected] // Courtney Kent is one half of The Compass Points Here, a photography and videography company based in Traverse City.