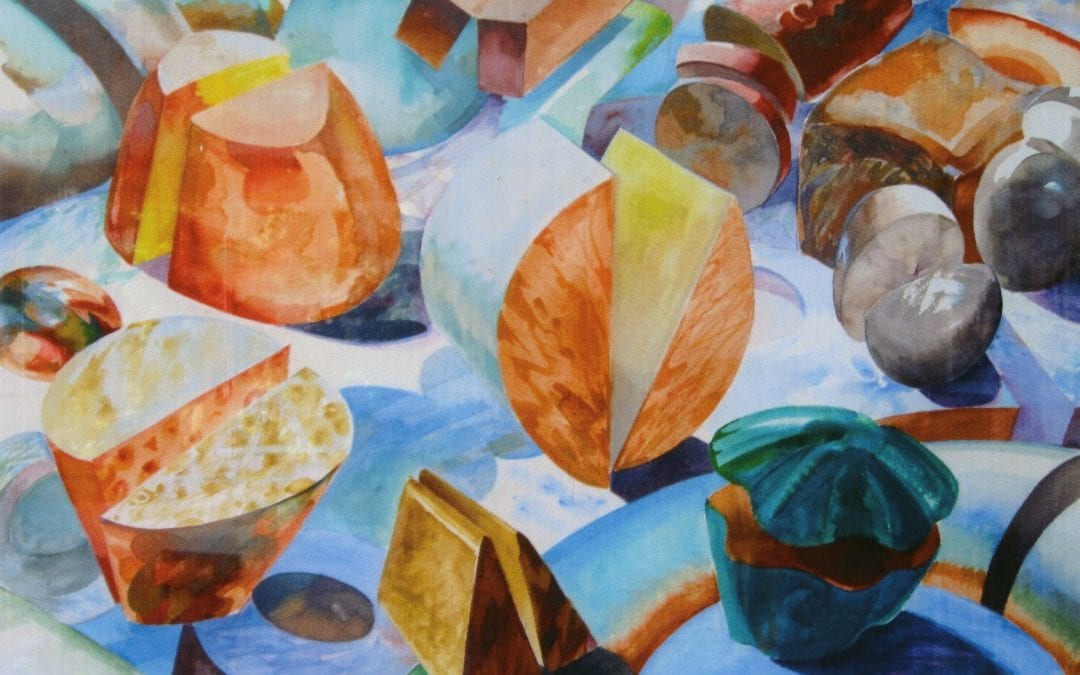 How do you like your eggs and art? Scrambled? Poached? How about over easy? Hopefully the lattermost, because Art Over Easy opens Saturday, October 14 at Crooked Tree Arts Center in Traverse City. Art Over Easy brings together works by artists who gather regularly for breakfast and discussion—one group in Ann Arbor, the other in Empire.

Sheila Ruen, the galleries director for Crooked Tree, says the exhibit will showcase not only interesting artwork but bring attention to the artist groups. “It’s a deep trust and friendship they share,” she says.

The Ann Arbor group is based around two former art professors from the University of Michigan, Paul Stewart and Takeshi Takahara, with the rest of the group consisting of former graduate students of theirs. “They kind of came together from an academic place. They were both print-making professors, and (the artworks) have a more coherent aesthetic,” Ruen says.

The Empire group began meeting for breakfast on Sunday mornings as a way to connect with other artists socially and professionally. These days they meet at Joe’s Friendly Tavern in Empire. The members range from painters to fiber artists to sculptors to folk artists. Thus their contributions to the exhibit are quite diverse. 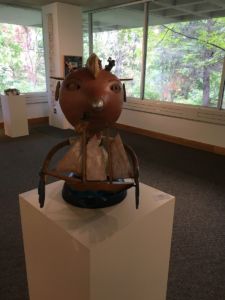 Take “Amarillo” by Dewey Blocksma. The mixed media sculptor who was born in Amarillo, Texas, says his work was inspired in part by “Cadillac Ranch,” a large-scale mixed media piece in Amarillo, with 12 Cadillacs partly buried in the ground. “The whole idea is to have some fun and do something different,” he says.

Blocksma says the group is more than just a cadre of artists. While discussions often center on art and art-related areas, topics can range from politics to weather to local and world events or anything else they bring up. He says they’ve become close friends over the course of the breakfast get-togethers, which started in 1990. “If a furnace goes on the fritz we’ll run over and fix it,” Blocksma says.

The group has even produced a book about itself. The Artists’ Round Table provides a brief look at each of the longtime members, including their work, and a brief history of the group.

The idea for the exhibit came from Ruen, who was an occasional visitor to the Ann Arbor group and who knew of the Empire group through Blocksma. She says the connection between artists and community is something Crooked Tree is looking to emphasize in Traverse City. “People think of an artist as a lone wolf,” she says. The presence of artist groups suggests otherwise, and Ruen is hopeful that the artists’ connections will also lead to more connections with the public—and with Crooked Tree in Traverse City. “We’re connecting and celebrating local artists and regional artists,” she says.

While the groups were brought together for the show by Ruen, there is another direct connection. Sarah Innes from Ann Arbor vacations in Empire, where she rents from Holly Sorensen, a member of the Empire group. “She’s a fabulous painter,” says Sorensen of Innes.

Innes says her contributions to the exhibit include drawings and prints. “I’ve always been a painter, but over the last 20 years I’ve developed a print-making method,” she says.

For her part, Sorensen is exhibiting several pieces of fabric art. “There are at least three of us fabric people,” she says, mentioning fellow Empire group artists Midge Obata and Judy McLaughlin. Sorensen’s contributions to the show include items incorporating other materials as well as fabric, lending them a sometimes whimsical note.

While it’s to be expected that the groups talk about art, it’s not the exclusive subject. “We don’t talk a lot about our own work. We talk about other people’s art. People are interested in what else is happening in the art world,” Sorensen says. “It’s fun. We’re supportive of one another.”

While the Empire group gathers at a restaurant, the Ann Arbor group meets every couple of weeks at one or another of the members’ studios. “We try to meet every two weeks on a Wednesday,” Innes says. “Everybody’s interested in art, but we’ll talk about anything,” she says. “We have a shared aesthetic of art that’s not too polished looking or slick. It’s open-ended, maybe some suspense or humor. It’s not dark.”

And like the Empire group, the Ann Arbor artists have become close friends. “They are the nicest people,” Innes says. “Whatever a person can give in time or conversation is accepted and appreciated. There’s no criticism. “

The opening reception is from 2 to 4 p.m. at the Crooked Tree gallery in Traverse City, located at 322 Sixth Street. It runs October 14 through December 2.