We’re following the footsteps of three of the greatest Northern Michigan authors of all time—Jim Harrison, John Voelker and Ernest Hemingway—to see the places that inspired them most. From breathtaking beaches to unpretentious taverns, come along on our literary adventure.

This article is featured in the September 2017 issue of Traverse, Northern Michigan’s Magazine. Get your copy. 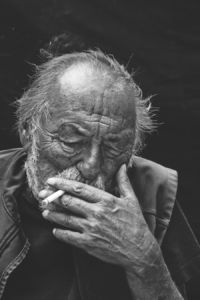 Even if Leelanau did not overtly appear in all of Jim Harrison’s writing, the spirit of the peninsula where Harrison lived during the years this poet, novelist and screenwriter wrote the bulk of his life’s work still somehow infuses every scene. The waters and hills and orchards and twisting two-lanes hover above the page like vapor, a love of, an understanding of, landscape that informs even when Harrison writes of places far away. Spend a weekend immersed in Harrison’s Leelanau County and odds are you’ll have a fresh understanding of place, too. 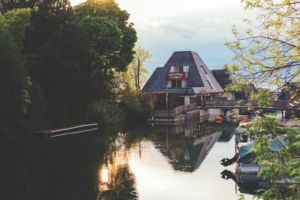 … Where Harrison wrote Legends of the Fall: Jolli Lodge, Leland. Harrison rented a cottage here one winter to write what would become his most popular novella, made into a blockbuster film starring Brad Pitt. BTW: The quaint and classic Leelanau resort is currently for sale.

… At the harbor town near Harrison’s home: A passionate fisherman, Harrison undoubtedly contemplated his beloved Lake Michigan from Leland Harbor. Stay there at the Leland Lodge or Falling Waters. 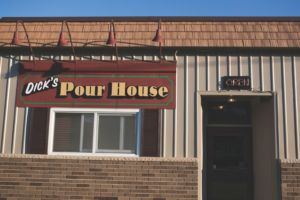 Bluebird Restaurant and Tavern, Leland: The famously private Harrison had two favorite pub hangouts in Leelanau. The Bluebird was one of them.

Good Harbor Bay, south of Leland: Part of the Sleeping Bear Dunes National Lakeshore, this lovely Lake Michigan bay drew Harrison to fish its waters and walk its beaches, and it inspired his writing. Renowned bamboo flyrod builder Bob Summers recalls meeting up with Harrison on occasion to night-fish in Good Harbor Bay, wading from shore in the dark, casting flies for lake trout as they swam the shallows seeking minnows for food.

Manitou Islands, visible from Leland and Good Harby Bay: In an essay for Traverse Magazine, titled “Leaving Leelanau,” Harrison wrote: “Looking at the Manitous on a winter walk is worth any self-help book save the Bible.” 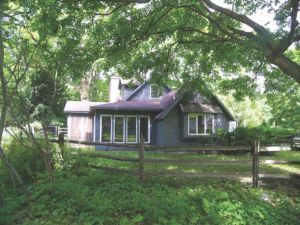 French Road home: The homestead—house, writing cabin, barn and paddocks—where Harrison lived during his years in Leelanau and where he welcomed longtime friends, writer Guy de la Valdene and singer/songwriter Jimmy Buffet, chef Mario Batali and others. (Privately owned, but you can drive by.)

Dick’s Pour House, Village of Lake Leelanau: Just a few miles from Harrison’s house on French Road, the unpretentious tavern was a Harrison go-to for relaxation and conversation.

Horizon Books, Traverse City: Where Harrison was known as a regular. In the early ’80s “they would front him free books when he couldn’t foot the bill,” recalls Traverse City author Doug Stanton, a best-selling writer and co-founder of the National Writers Series. 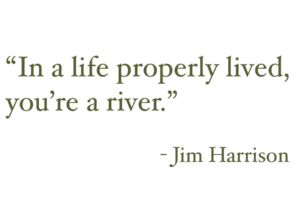 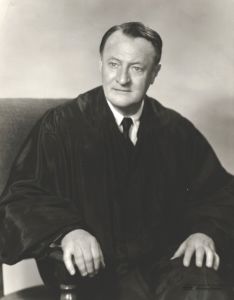 To love John Voelker’s writing is to love the Upper Peninsula. And there is no better time and place to love the U.P. than in late summer and early fall while wandering the realm that Voelker called home: no bugs, crisp air and hints of autumn color in the trees.

Voelker, who wrote under the pen name Robert Traver, is best known for his best-selling novel Anatomy of a Murder, which, in 1959, Otto Preminger turned into a feature film starring Jimmy Stewart, Lee Remick, George C. Scott and Eve Arden that earned seven academy award nominations. But Voelker was most intimate with his homeland when writing about fishing—philosophizing about trout and the time spent with pals, flyrod in hand. We’ve mapped out a weekend that takes in all of it. Check out the place where American entertainment icons (Duke Ellington, even) partied in downtown Ishpeming. Float a line in one of Voelker’s favorite streams: the Yellow Dog River (which also happens to be one of the region’s prettiest). And just plain dial things back to the pace of the U.P. 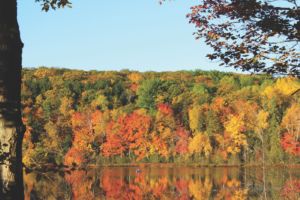 … Where Preminger filmed: Thunder Bay Inn, Big Bay. Though the murder that inspired Anatomy happened in the nearby LumberJack Tavern, the bar scenes were shot in this classic inn. Thirteen rooms, starting at $70/night.

… Where the film crew stayed: The Landmark Inn, in downtown Marquette. Refurbished boutique hotel with 1920s elegance. Restaurants and waterfront all close. From $165/ night. 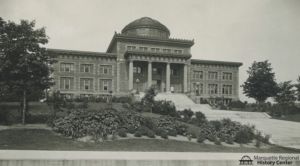 LumberJack Tavern, Downtown Big Bay: The humble pub where Lt. Coleman Peterson accused tavern owner Mike Chenoweth of raping his wife and then shot him to death. The crime and subsequent trial, in which Voelker was the defense attorney, became the basis for the novel Anatomy of a Murder.

Yellow Dog River Falls: Cast a line into this rocky stream, like Voelker did, or just walk to the falls and picnic. About 9 miles south of Big Bay, on highway 510. Park where the road crosses the river and hike downstream about a half-mile to the falls. Gorgeous!

Marquette County Courthouse, Downtown Marquette: Where both the real trial and the staged trial took place.

Superior Dome, Northern Michigan Universtiy, Marquette: A museum-type display of Voelker artifacts, including his desk, some fishing equipment and manuscripts.

Mather Inn, Ishpeming: Now apartments and an event venue, the former hotel is where several of the movie’s stars stayed. Duke Ellington composed the film’s music score at the grand piano here—the first score for a major motion picture written by an African American.

Congress Lounge & Pizza, Ishpeming: Lots of Anatomy memorabilia on the walls. Also where cast and crew hung out on occasion during filming. 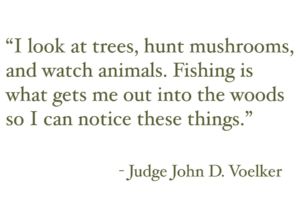 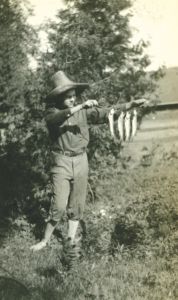 There would be other loves—Paris bistros, Cuban cats and cigars, marlin off the Florida Keys, Montana’s heavenly skies. But before all of that, Ernest Hemingway was infatuated with Northern Michigan. He married his first wife, Hadley, here almost a century ago. That event, set in the village of Horton Bay on Lake Charlevoix, closed the Northern Michigan chapter of Hemingway’s life. But by then the landscapes, landmarks and characters of our region had so infused his imagination that they came pouring out in the now legendary stories he wrote in Paris, where he and Hadley moved soon after their wedding. Most notably, Paris is where Nick Adams came to life—that quintessential Northern Michigan summer boy that stars in many of Hemingway’s stories.

So many of the landmarks that he quilted into those stories still exist, that to see them is to feel the writer’s very presence. Hemingway junkies are all but guaranteed spine tingles. And even if you don’t care a hoot whether your writing is crisp and verb-filled (Hemingway) or cloying and flowery (virtually every writer before him) you’ll be inspired by the landscape, pubs and eateries along this trail. Brush up on your Hemingway 101 and follow along as we introduce you to Hemingway’s Northern Michigan years. 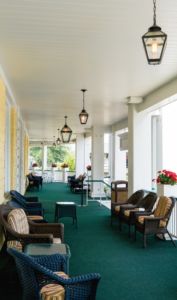 …Where Hemingway Stayed: The lemon yellow Stafford’s Perry Hotel, on the corner of Bay and Lewis Streets was built in 1899—the same year Hemingway was born. He stayed here when he was 17, after a hiking and camping trip. Relax in one of the 75 guest rooms and you’ll know how young Ernie felt when he returned to civilization after his trip. 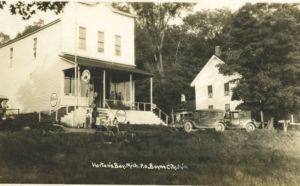 Sumner Road public access on Walloon Lake: As a teenager, Hemingway rowed from Windermere, across Walloon Lake to the end of Sumner Road. A mile-and-a-half-walk landed him in the hamlet of Horton Bay where he had a number of friends and adventures that would figure heavily into his stories. Years later he would pen a scene in his story “Wedding Day,” in which Nick Adams and his bride, Helen, launched here to row across the lake to a honeymoon cottage after their wedding. Not coincidentally, this is also where real-life Ernest and his bride Hadley rowed away to spend their honeymoon night across the lake at Windermere after their wedding.

Horton Bay General Store: This 19th-century white clapboard building in the middle of town makes an appearance in both “Up in Michigan,” and “The Last Good Country.” Take a seat on the front porch like Hemingway often did. Better yet, nowadays you can do what he didn’t do: stay in the B&B above the store, have a drink in the tavern in back, and enjoy breakfasts, lunches and special tapas dinner.

Pinehurst and Shangri-La: These two privately owned cottages on Lake Street are what is left of the Dilworth Resort where Hemingway bunked (in the back of Pinehurst) when he was in the village. The Dilworths hosted a wedding breakfast for the newly married Hemingways in Pinehurst. The Dilworth Resort makes an appearance in “Summer People,” and “Up in Michigan.”

Public access on Lake Charlevoix: Continue down Lake Street to where it ends at Lake Charlevoix and you’ll know the setting Hemingway was imagining when he wrote “The End of Something,” “Summer People,” “On Writing,” and “Up in Michigan.” 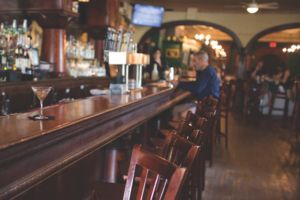 City Park Grill: Lore has it that the aspiring writer liked the second seat from the end of the bar. Great food and live music means it’s still a fun place. 432 East Lake Street.

Little Traverse Historical Museum: To get your Hemingway bearings, stop in at this train station-turned-museum. Not only does it have a fascinating and permanent Hemingway exhibit but the writer also mentioned it in “The Indians Moved Away.”

The Carnegie Building: Once the Petoskey Public Library, this building was a favorite place of Hemingway’s when he was living in Petoskey during the winter of 1919–20. In December of 1919 he spoke here to the Ladies Aid Society about his experiences in World War I—memories that became the basis of his epic “A Farewell to Arms.” 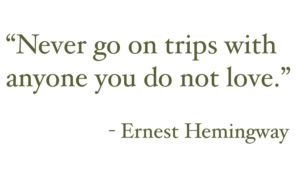