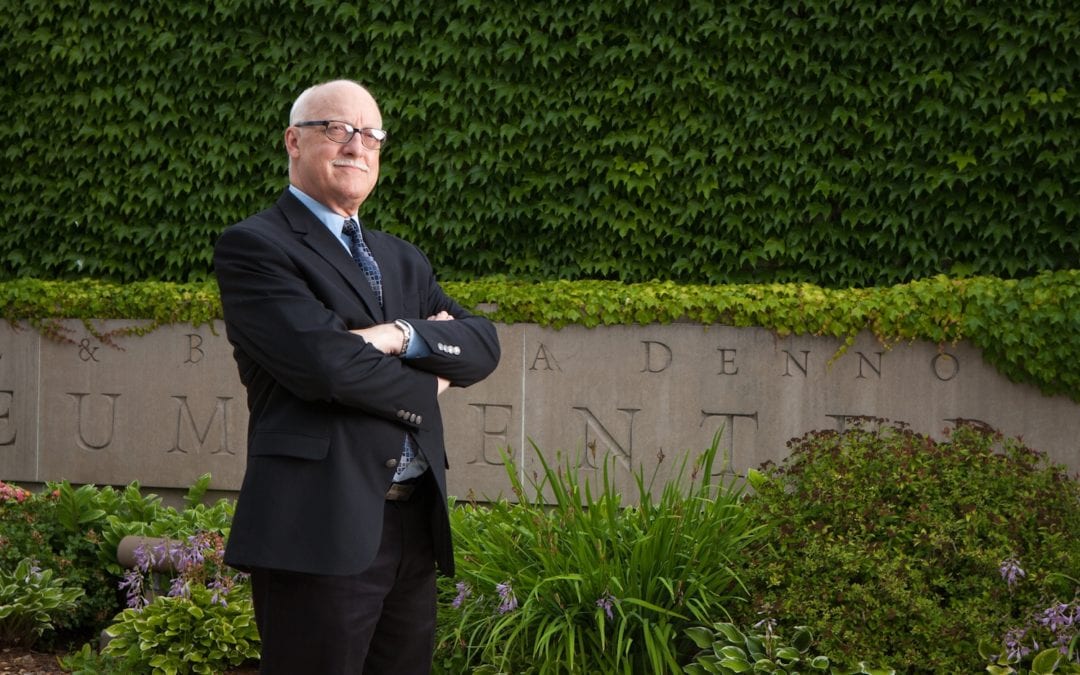 It’s fitting that Gene Jenneman gets to shepherd a long-planned, soon-to-be-completed $5 million Dennos Museum expansion: He’s the only director the museum has ever known—and in fact, delayed his retirement just to see the project through. When it’s all said and done (Gene gave us a tentative ETA of early November), the Dennos will have nearly 15,000 square feet of additional space to devote to its mission, much of which will take shape as new permanent galleries.

In November, look for brand new exhibitions of the Dennos’s 1,500-work collection of Inuit art—the largest collection in the United States; and new galleries of non-Inuit art, including the museum’s growing collection of world-class photography, the centerpiece of which is a rare print by American photographer Edward Weston. For Jenneman, though, the significance of the expansion transcends sheer numbers. “Is it a collection like the Detroit Institute of Arts? Of course not,” Jenneman says. “But it’s very respectable for a museum in Northern Michigan. Part of building a significant art collection is demonstrating your willingness to commit to it and to show it. And these permanent galleries do that for us. It’s already sparking gifts of higher quality.”

The remaining space will be used for classrooms, mechanical and storage space. “The most important aspect is we can exhibit art built into the syllabi of classes,” Jenneman says, noting that the works will reach across numerous disciplines. “Studio art or writing or even nursing, where students observe by analyzing works of art. It gives us an opportunity to integrate it into the coursework.”

While work continues on the building, three new exhibits have already been unveiled. Two of them harken to the far north. “Into The Arctic: Paintings of the Canadian Arctic” features more than 50 oil paintings and two documentary films by Cory Trépanier.

Trépanier is a fellow of the Explorer’s Club and the Royal Canadian Geographical Society. He has made four expeditions to the furthest reaches of the remote land, and his paintings and the films showcase its bleak beauty. A highlight of the collection is his 15-foot-wide “Great Glacier,” possibly the largest Arctic landscape painting in Canada’s history. 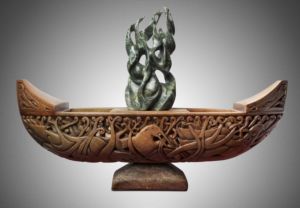 As a young child, Inuit sculptor Abraham Anghik Ruben lived a nomadic existence, traveling with his parents as they hunted caribou, polar bears and beluga whales in the Northwest Territories. He was removed from his family in the mid-1950s, then a common practice among Inuits by the Canadian government, and forced into residential schools. After leaving the school while in 10th grade, Ruben discovered the art program at the University of Alaska, where he began his art education. Since then, he has become a major innovative force among Inuit sculptors. The exhibit is entitled “Myths, Legends and Stories: Sculpture by Abraham Anghik Ruben.”

The third exhibit showcases two masterpieces from the Detroit Institute of Arts, both featuring human figures, a beach, the shore and the water, though from different artistic tradition. William Bougeureau’s Sisters on the Shore features two girls rendered with such realism and detail that they almost appear frozen in time. (Update: This exhibit has been delayed until early October.) 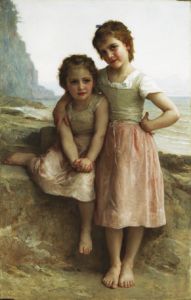 Bougeureau was embraced by the traditionalists and scorned by the fledgling impressionists, while his contemporary, Edouard Manet both influenced and was influenced by the impressionists, leading to his being called the Father of Modernism. In On the Beach, Manet’s figures and environment are rendered much less precisely, and his brushwork suggests a sense of movement among the figures as well as the sea.

The newness extends to the season’s slate of performances at Milliken Auditorium, where several artists will be making their local debuts. Guitarist Paul Brown kicks off the season October 21. Initially a drummer before becoming an engineer and producer, by the time he’d released his first album as a guitarist, Brown had already worked with the likes of guitar heroes like Larry Carlton, Jeff Golub and Peter White, saxophonists Boney James, Kirk Whalum and Euge Groove, trumpeter Rick Braun and singer Al Jarreau, among many others.

To date, he’s released eight albums as a leader, the most recent of which is One Way Back. He’s joined by fellow axe-slingers like White, Chris Standring, Marc Antoine and the late Chuck Loeb, as well as “Brother” Paul Brown, a keyboard player who shares the same name. “I was looking for something along that line, like Larry Carlton, Chuck Loeb,” says Jack Conners of booking Brown. Conners, who also teaches in NMC’s audio tech program, is in charge of the concert series.

Another new act joining Brown on the jazz side is the Brubeck Brothers Quartet. Led by piano legend Dave Brubeck’s sons Chris (bass and trombone) and Dan (drums) with Mike DeMicco (guitar) and Chuck Lamb (piano), the quartet performs across the globe. Their tour hits Traverse City November 18.

“Blues shows always sell well, and people like the blues, it’s part of the tradition here,” Conners says. To that end, another new face is Toronzo Cannon, who grew up in the Chicago blues tradition of performers like Buddy Guy and Junior Wells. His show is set for January 27.

From blues to bluegrass with Michael Cleveland and Flamekeeper February 24 and Davy Knowles, who closes the season May 5. Conners calls the latter an “under the radar” performer.

Conners is particularly excited about the local debut of folksinger Jonatha Brooke. “I love her music,” he says. Critics have praised her “flawlessly crafted lush backdrops for songs that muse wistfully about love and destiny” with complex arrangements and gorgeous vocal harmonies.

It’s not all about rookies though. Cajun favorites Beausoleil avec Michael Doucet return, as do the Golden Dragon Acrobats. Find a complete list of shows here.