16 Things to Do in the Mackinaw City Area This Fall 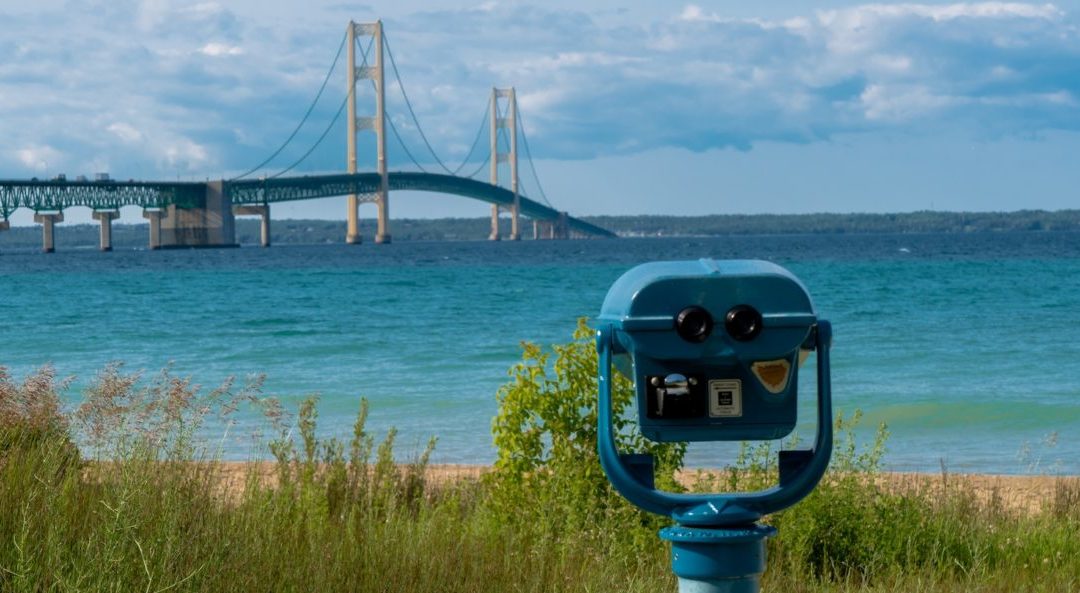 Mackinaw City is considered the “Crossroads of the Great Lakes” for good reason—it’s central to dozens of unique locations and activities along both the Lake Michigan and Lake Huron shorelines, as well as the vast woods and waters of both the Upper and Lower Peninsulas. This autumn, bring the family, friends or go solo on a trip to the “Tip of the Mitt” to explore Michigan’s most colorful season.

Generally, the annual seasonal show peaks in stages, beginning at the top of the state in the Upper Peninsula, where it gets cooler first. Peak color is usually found in the U.P. between mid-September and early October and in the northern Lower Peninsula between late September and mid-October.

Color patterns, however, depend greatly on the weather as well as other factors including lake-effect warming, which delays color changes near Great Lakes and inland water shorelines. In addition, cooler valleys or exposed hills may see color changing faster. Weather conditions in summer and early September largely determine how brilliant each season’s colors will be.

There are nearly 150 different species of trees in Michigan’s 18.6 million acres of forest. Our state boasts a colorful mix of yellows, reds, golds and oranges. Some of the most beautiful colors are displayed by such hardwoods as aspen, maple, birch, sumac and oak. When combined with a background of evergreen forest, the result is one of the best shows in the nation.

As you make plans to visit the Straits of Mackinac area during the fall season, consider these unique ways to enjoy the color show! 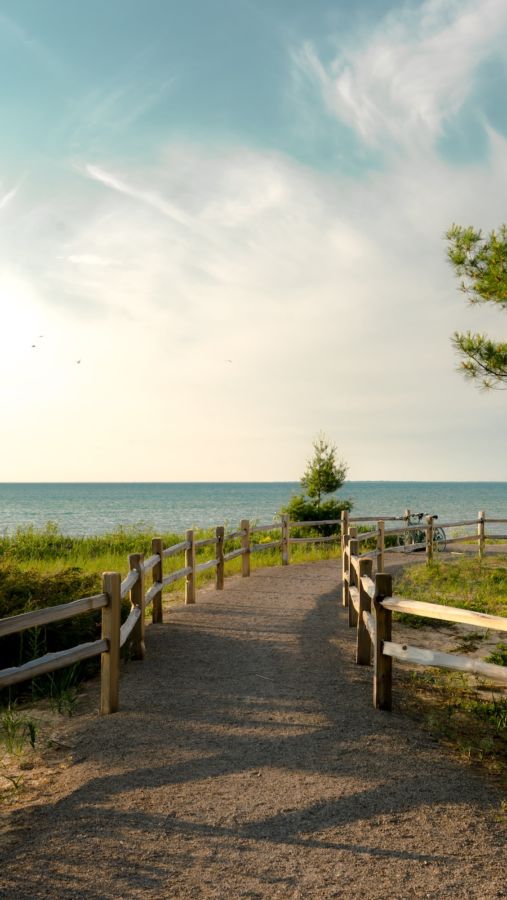 Collect leaves. Remember in high school biology when you had to collect leaves as part of a class project. This is a great multi-generational project to get you out on the local trails and in the parks to hand select the prettiest of leaves. Consider pressing them between pieces of wax paper, just like when you were a kid. Head out into the trails at Wilderness State Park, The Headlands or Historic Mill Creek to begin your search! Find more Mackinaw City area hiking trails.

Go on an elk viewing excursion. Just about 80 miles south/southeast of Mackinaw City is one of the state’s prime elk viewing sites—the Pigeon River Country State Forest and Elk Range in Gaylord, one of the largest free-roaming elk herds east of the Mississippi (with 105,000 acres). The most popular time to view elk is during the breeding season in September and October when they are feeding in open grassy areas and bulls are bugling. The best times to view elk are at dawn and dusk. NOTE: Elk should be appreciated at a distance and individuals should not try to approach the animal. The Michigan Department of Natural Resources has published a Viewing Guide online, to provide more information about this unique experience.

Photograph waterfalls. The Upper Peninsula is home to more than 300 waterfalls, ranging in size from under five feet to more than 48-foot vertical drops. Michigan’s largest falls are Tahquamenon—located just 80 miles from Mackinaw City. The centerpiece of Tahquamenon Falls State Park’s 50,000 acres, the Upper Falls is one of the largest waterfalls east of the Mississippi with a drop of nearly 50 feet and more than 200 feet across with a water flow of more than 50,000 gallons per second. If you’re up for an adventure, paddle the falls!

Moon viewing. The Full Hunters Moon will be seen on October 6. While there are plenty of open air places around Mackinaw City to look at the stars, the Headlands International Dark Sky Park is the premier location for unobstructed views.

Take a scenic drive. Michigan is home to many Pure Michigan Byways which celebrate the state’s outstanding natural beauty and many sites of historical, scenic, recreational and cultural significance. The Mackinaw Area Visitors Bureau has even established a specific Fall Color Tour Route, which will take you along some of the most scenic sites in Northern Michigan! Several of these routes are easily accessible from Mackinaw City, including:

Hike the North Country Trail. The North Country National Scenic Trail passes through seven northern states—New York to North Dakota—traveling extensively through Michigan’s two peninsulas. When completed, the 4600-mile trail will be the longest continuous hiking trail in the United States. Coming out of Petoskey, the trail travels through Mackinac State Forest and Wilderness State Park where it follows the Lake Michigan Shoreline to Mackinaw City. The trail enters town on the southern border and its entire one-mile stretch inside the village is also a paved DNR Rails-to-Trails project named the North Western State Trail. From the trailhead, there is also access to the DNR’s North Central State Trail, which will take you from Mackinaw City south to Gaylord. For those wanting to continue north via the Mackinac Bridge, The Bridge Authority provides a shuttle to the trail’s Upper Peninsula connector. (Before you go, read these stories about hiking the NCT in summer and in winter!)

Explore Michigan’s national forests and lakeshores. In the 1920s and 1930s, the US Government started a “resettlement program” which provided for the direct purchase of marginal ag land and resettled those people onto more productive lands. Most of the purchased land was set aside for national or state forests. Michigan has four national forests, two of which are within close proximity to Mackinaw City. 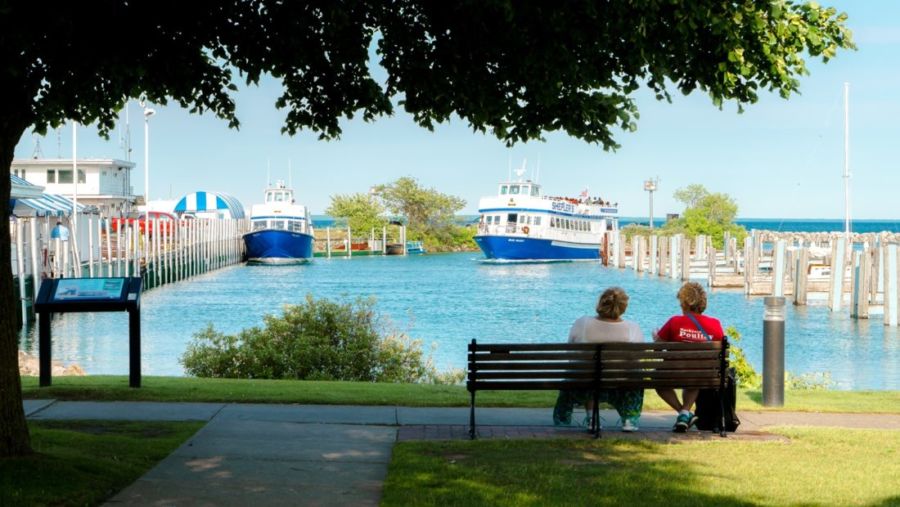 Go on a cemetery tour. Take a ferry ride over to Mackinac Island and explore one of the three cemeteries found there—two civilian and one military. Ste. Anne’s Catholic Cemetery is the largest of the three, the Protestant Cemetery is referred to by locals as “The Mackinac Island Cemetery” and The Post Cemetery is the military site with graves dating back to the War of 1812 with both British and American soldiers buried there. The Post Cemetery is designated as a National Historic Landmark and the flag here continually flies at half-mast—one of only four National Cemeteries with this honor. All three are adjacent to each other on Garrison Road in the middle of the island and are open to the public during daylight hours.

Count birds. The 2017 Mackinac Straits Raptor Watch waterbird count began on August 20 and continues through November 10. MSRW invites anyone interested to come to McGulpin Point, on the west edge of Mackinaw City, during this period to observe the migrating waterbirds and talk with migration experts who are conducting the count. In the fall of 2016, a professional counter observed a total of 44,302 waterbirds during 661 hours of work. As many as 20,000 long-tailed ducks and 4,000 white-winged scoters were counted in 2016, in combined spring and fall totals. The waterbird count began in 2015 with volunteer counters finding that there were substantial numbers of migrating waterbirds coming through the Straits of Mackinac area in the Fall. In 2015, counting for only 170 hours, a total of 18,164 birds were observed of 28 different species.

Try geocaching. This high-tech treasure hunt involves using a GPS to find a container (or cache) using specific coordinates. Northern Michigan’s many geocache spots combine hiking, birding, wildflower and leave viewing, wildlife and other outdoor recreation and natural attractions. There are hundreds near the Straits and some unique and amazing locations in Mackinaw City. To get started, sign up at geocaching.com and download waypoints to your smart phones or visit the Mackinaw Public Library computer lab for coordinates. Here are some tips to get started geocaching.

Take a trolley tour. The Mackinac Old Time Trolley offers narrated historical tours of Mackinaw City’s timeless sites including the Mackinac Bridge, Colonial Michilimackinac, Old Mackinac Point Lighthouse and the Coast Guard Icebreaker Mackinaw. In the morning, the one-hour tour stays in town while the two-hour evening historical trip heads up over the five-mile Mighty Mac for a tour of Upper Peninsula sites.

Cast a line. Michigan boasts more freshwater coastline than any other state (3,177 miles of Great Lakes shoreline) as well as more than 11,000 inland lakes (more than Minnesota, FYI) and 36,000-plus miles of rivers and streams with nearly 150 different species of fish. There are also many “Blue Ribbon Trout Streams” within a short drive of Mackinaw City such as the AuSable, Maple and Sturgeon Rivers in the Lower Peninsula (among 35 total) and Tahquamenon, Fox and Two Hearted in the Upper Peninsula (among 13 total). For more about fishing in the area, click here.

Go on a self-guided sculpture tour. Scattered around Mackinaw City are several wooden sculptures carved by Jerry Prior, each depicting a person of historical importance in town. He started wood sculpting in 1989, shortly after he retired from the Michigan Department of Transportation, where he worked as a road designer. His first sculpture was Chief Wawatam, which stands in Wawatam Park. Next, it was Alexander Henry, a fur trader at Fort Michilimackinac, followed by British Major Arent Schuyler DePeyster who once commanded Fort Michilimackinac; Perry Darrow—a civic-minded village resident; Edgar Conkling—Mackinaw City’s founder (standing proudly in the park that bears his name); and Hattie Stimpson—one of the city’s first residents. 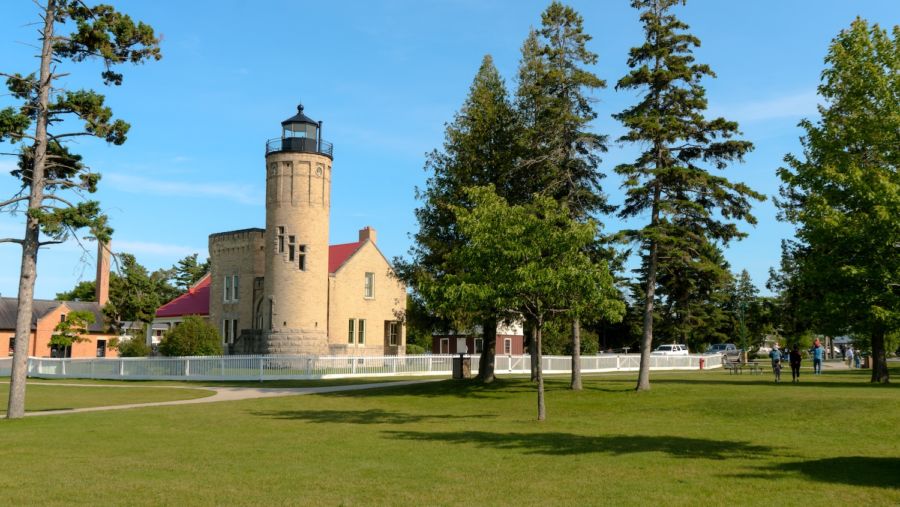 Climb a lighthouse. Michigan has more lighthouses than any other state (at nearly 120) and the Straits area is home to more than a dozen of these historic navigational aids. Among those open for tours during the fall season are Old Mackinac Point Lighthouse (1892–1957) and McGulpin Point Light (1869–1906). Read more about the history of our area lights here.

Swing the sticks. Fall is a perfect time for a round of golf—the crowds, bugs and prices are reduced versus the peak summer season. In the Mackinaw City area, check out Cheboygan Golf & Country Club or The Mackinaw Club.

Scare yourself! It is Halloween season, after all. Fort Fright is a “haunted” experience held October 6–7 (6:30–9:30 p.m.) at Colonial Michilimackinac in Mackinaw City. Explore the wooden palisade of the Fort at twilight and experience the legends and lore of the Native Americans, French Canadians and British who called this site their home.The Mackinaw Area Historical Society & Heritage Village is hosting two ghostly events in October. A “Ghost Supper” is planned from 2–4 p.m. on Sunday, October 15 and “Triple Fright Night” will run from 6–8 p.m. on Saturday, October 21. If you’re headed to Mackinac Island, check out the Haunted Theater or go on a Haunts of Mackinac ghost tour.

For lodging reservations for the fall season in Mackinaw City, visit MackinawCity.com/stay/ or check out MyNorth’s hotel directory.

More Things to do in Mackinaw City