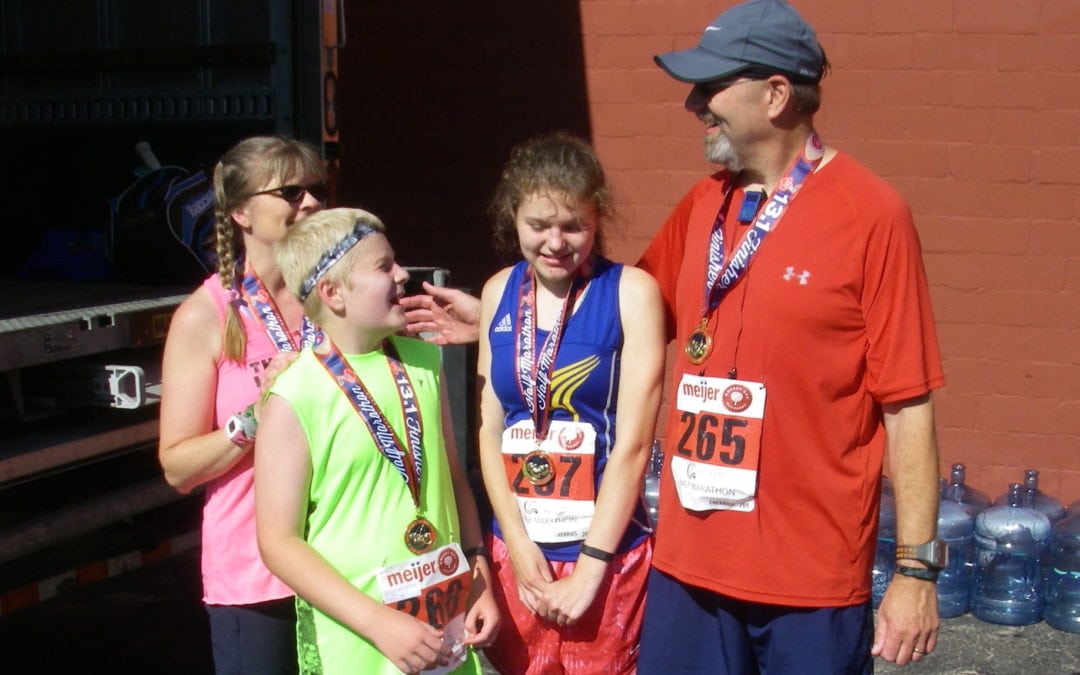 Michelle Elliott and Katherine Brege, race directors for the National Cherry Festival Races 5K, 10K, 15K and Half Marathon, Traverse City, July 8, 2017, along with their assistant, Tabitha McNeal, and many smiling volunteers, welcomed over 3,100 runners to the Festival of Races for a lovely day, lovely weather and a fine race as it finished on the route prior to the Grand Royal Parade. Sponsored by Meijer, Chateau Grand Traverse, Cherry Bay Orchards and Priority Health, the race was started in 1973 as a 10K by George Khun. Results can be seen here.

Let’s get right to our “winner.” He wasn’t the fastest runner, he finished toward the end of the pack, but Grant Forrester, 30, was the bravest runner and one of the toughest runners in the race. As a result of a childhood auto accident, Grant is a spastic quadriplegic and must travel the course in his special walker.  Grant led “Team Grant,” about 40 people, wearing special t-shirts, who were encouraging Grant toward the finish line. Grant was assisted by friend and trainer, Kevin Kaye, his stepdad, Rich Little, and by his mom, Lauren Lehner. Lauren told me Grant’s goal in 2005 was to simply walk at all. In 2011 his goal was to complete the 5K course. Grant serves as a lesson in perseverance and bravery. His mom, Lauren, says, “If you have a child with a disability, don’t give up. Always believe and encourage because what you give will be returned many times.” Congratulations to our National Cherry Festival of Races “winner,” our champion, Grant Forrester.

Another “winner” is Roger Mulder, 77, from Holland. Roger had five heart bypass surgeries, and wears a pacemaker. Roger ran his first race at age 64. With his doctor’s approval, Roger has run 567 races. Rogers message of encouragement to readers follows: “With a doctor’s permission, do any exercise. Don’t sit on your duff. It also helps to say a prayer.” Roger and I ran neck-and- neck throughout the 10K, passing each other several times. I edged Roger out at the finish, but it was close. Roger used a technique of alternating running for one minute and walking for 30 seconds. Did I say it was close??? Slower runners such as Roger and me can have fun and good competition.

Dan Bergin, 53, of Pinckney, and his daughter, Jessica, 27, were an important lesson for many of you who did not run in this race. Jessica has Rett Syndrome, similar to severe autism. Dan and Jessica ran the 10K with Jessica riding in a special racing cart. Jessica gets out of the cart at the finish and together they cross the line. This was their 119th race. Dan must wear knee braces due to a football injury. Because he trains, Dan’s knees are better. Running helps! Dan uses a safety strap attached to him while pushing the stroller. Dan is one of the few runners who use the safety strap with a jogging stroller which guards against the cart “escaping.” Way to go Dan and Jessica.

Carol Brown, 56, of TC, Ran the 10K but she and her friends had an ulterior motive. Everyone from Hope Water International, a non-profit 501c3 corporation, is raising funds to support clean water in Africa. Currently, Africans walk an average of 6 miles each way to get clean water.  Carol was joined by Dan Dean, 56, Todd Brown, 54, and half marathoners, Lindsey Brown, 21, Levi Leversee, 24, Bridgette, 52. and Brittany Boyle, 22. Allen Wittbrodt, 52, was joined by family members, Laura, 50, Madison, 15 and Noah, 12. Allen ran the race in twin knee braces which help control his kneecaps, which easily dislocate. Mary Behm, 60, Leslie Heimberger, 57, and Nina Westnick run for better mental health and because of the friendships they have made. Terry Sonneveldt, 59, was one the last finishers. He dropped 20 pounds and is training for another race. Susan Wilson, 67, of Dayton, started running 40 years ago. Running helps her control arthritis and helps her control weight. Among the happy finishers were Kathleen Guy, 61, and her daughter, Emily Knapp, 33 of TC. Emily is 7 months pregnant. Exercise makes for an easier pregnancy and delivery.

Pat Erway, 42, was a detective inspector in TC until he suffered a motorcycle accident causing severe head injuries.  As a result of the accident, Pat also must wear a knee brace. Pat’s fiancé, Wendy Heiksema, 44, joined him in the 5K. Rebekka Willkinson, 20, runs with her mobility assistant dog, Zola, a 2-year-old Anatolian Shepard. Rebekka is a part-time wheelchair user. She suffers from Ehlers-Danlos Syndrome and Fybermiralga. Elisse Blank, 26, from Rochester and Munich, Marissa Blank, 39, Chris Imber, 41, Clayton Imber, 3, Monroe Imber. 1.5. and Laurie Blank 66. Guess who was pushed in racing strollers in this family group? Rich Boone, 63, of Arcata California, has been running 48 years and loves it. Our prize for the longest trip to the race goes to Benjamin Aielke, 36, of Cologne, Germany, and his friend Lena Sieken, from Berlin. Welcome to America. Hope Huizinga, 36, from Grand Rapids, runs “because it’s cheaper than a therapist. Running is calming.” Hope is a social worker so she ought to know. Lou Ann Fitzpatrick, 58, and her daughter Jessica Courtright, 31, from Rosebush, camped at Interlochen. “Running helped me recover from depression and anxiety caused by a divorce and it helps us spend time together. This is race two of eight planned races.” The race couldn’t have happened without many helpful volunteers such as Amy Hiller who helped with shuttle buses and late registration and Katy Bies, who also helped with late registration. Both are parents whose children run on the Kingsley Cross Country Team.

Michelle Elliott and Katherine Brege, race directors for the Cherry Festival 5K, 10K, 15K and Half Marathon, hope you will join them for next year’s race or one of the other races conducted by the National Cherry Festival. Most of the 3,100 runners had important stories of friendships gained, better health, and feeling good to explain why they run. Whether it be for better health, stop smoking, weight loss, running is a free “snake oil.” But remember, talk to your doctor before starting an exercise program.

Mickey Fivenson, 75, is a stroke survivor. Mickey’s doctor credits running to his survival. He is a 100 pound loser and former director of the National Cherry Festival Races. Mickey founded the Cherry Festival Golden Mile and Wheelchair Races. He completed over 60 marathons and holds a marathon world record with sons, Zack and Adam. He has trained 150,000+ miles in 48 years of running. He took second place in his age group. If you’d like tips on running, on marathons, if you have a story to share how running has impacted your life, or if you would like coverage of your race, contact Mickey through the editor (editorial@traversemagazine.com).