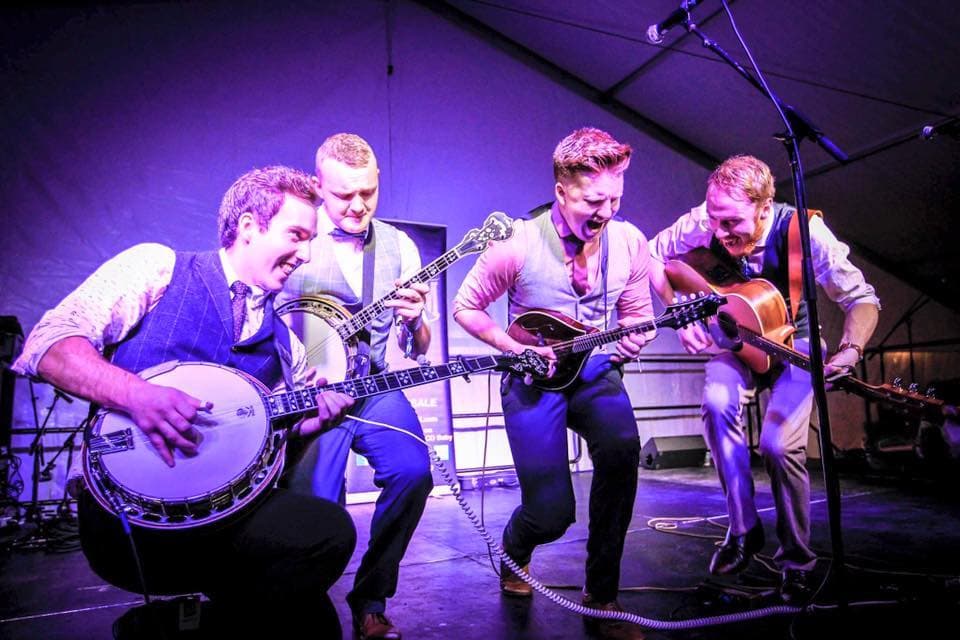 It’s a long way from the Emerald Isle to Elk Rapids, but for the members of JigJam, the latter is perhaps becoming a home away from home. The Irish quartet is performing at the Historic Elk Rapids Town Hall August 10, the band’s third appearance at the venue.

Concert promoter Seamus Shinners, who is coordinating the show through his Connemara Concerts, says the group has been warmly received, leading to its multiple performances. And Elk Rapids isn’t alone in its embrace of the band. The group’s unique fusion of Celtic roots music and bluegrass, dubbed “Celtgrass,” has been making waves and receiving plaudits since the band released its debut album in 2014. 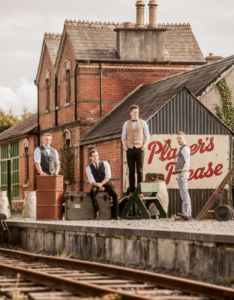 Trad Connect said in its review of Oh Boy!, “Artists whose musical interests lie beyond pure trad can find wider commercial acceptance by mixing it up a little.” True, but it’s not like these guys are selling out, pandering a watered-down version of music for commercial gain. Tim Carroll in Folkways called the group “sparkling, innovative and infectious,” and listening to the group’s music it’s clear he’s correct, whether one is looking for superior musicianship or danceable ditties. Bold and sprightly originals on both Oh Boy! and its follow-up, Hello World, fit convincingly alongside traditional jigs and reels, as well as songs by Richard Thompson and Thom Moore. Indeed, purists of both Celtic and bluegrass will no doubt find reason to enjoy the music. 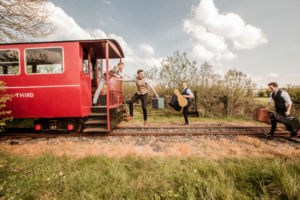 Shinners says this show is part of a summer-long tour by the band. JigJam will be performing in Glenn near Saugatuck prior to this show, then at the Ohio Celtic Festival in Cleveland before returning to the Great Lake state for a show at the Nahma Inn in Nahma on Big Bay de Noq in the UP. According to the group’s tour itinerary on its website, it will also be doing a show at Bellamy Correctional Facility in Ionia.

Shinners says the tour is coinciding with the release of the band’s third recording. Live at Tullamore showcases the band doing what it does best, performing in front of an audience. As such, it gives a taste of what the audience at Elk Rapids can expect.

JigJam’s show is part of a summer-long series at the town hall. Past shows included Jazz North and Mulebone, and upcoming shows will feature Max and Ruth Bloomquist and the Outside Track. Shinners, a one-time board member of HERTHA (Historic Elk Rapids Town Hall Association), says the renovated building has become a great showcase for live music, with air conditioning, a bar and wooden floor perfect for dancing. “Make sure you bring your dancing shoes,” he says.

Showtime is 7:30 p.m. Tickets for JigJam are $20 in advance and $25 at the door. Ticket outlets include Oryana in Traverse City, Corner Druggist and Chef Charles in Elk Rapids, or online at jigjam.eventbrite.ca.

Though the band is busy getting ready for its U.S. tour, which kicks off with the August 9 date in Glenn, lead singer Jamie McKeogh was kind enough to do a quick Q&A.

So how did you come up with this unique musical combination? And why?

“We all grew up playing traditional Irish music together so we’ve always been surrounded and immersed in the Irish tradition. In the past few years we’ve gained a huge interest in American folk and bluegrass music and started playing it when we began gigging. As there are many similarities between Irish and bluegrass music, we thought it might be interesting in a genre that explored the best of both, hence the term “Celtgrass.” We found it was an achievable style of music for us with our traditional Irish background along with the instruments we have in the band. Although we are all Irish traditional players, we feature a five-string banjo and a double bass, which would be more typical in bluegrass music.”

Who are some of the band’s inspirations?

“As a band we listen to many genres of music, so we are inspired by many artists. From an Irish point of view, artists such as We Banjo 3, Beoga, Flook and Lúnasa have been a huge inspiration for us. On the bluegrass side of things we really look up to the likes of Punch Brothers, Infamous Stringdusters, Old Crow Medicine Show, Union Station and many more. However, we have all been inspired from artists outside the Irish and bluegrass genres, everyone from Bruce Springsteen to The Eagles.”

Who are some of the other musical artists you listen to?

“Like our inspirations, we tend to listen to a wide range of bands. It can vary from time to time, but for an example, in the past year here’s some of the bands that we’d have blaring in the tour bus: The Eagles, Infamous Stringdusters, John Mayer, Rascal Flatts, Brett Young, Pokey laFarge, Bruce Springsteen, Frank Sinatra, John Martyn, James Taylor, The Lumineers, Zac Brown Band and lots more.”

Why should someone who’s never seen the band attend a show?

“Our style of music is unique. There are not many bands playing the genre we play, so it’s a great experience to hear it for the first time. We also try to make our shows as energetic as possible and try to incorporate as much crowd interaction and participation as possible. This is through singing, dancing and a few good old Irish jokes! A JigJam show is an enjoyable and unforgettable experience for everyone involved—it’s not to be missed!”

Why should someone who’s seen the band before attend a show?

“If you have seen us before, you’ll be coming back to try and relive the fantastic memories you had from the previous show! You’ll have to come back to show the band the dance moves you’ve been practicing since the last show. Most people that do come back to see us again enjoy it just as much if not more than their first show, as they know the songs and they can sing along. But they’re always in for a surprise along the way because you never know what’s going to come next, and sometimes the band doesn’t know either!”

You’ve played here before. What keeps you coming back?

“We have a big love for Michigan since we played here first in 2015 at Michigan Irish Fest in Muskegon. We find the crowds here very easy to play for and everyone is so kind and treats us so well. Elk Rapids is a beautiful part of the world and we’ve seen it in both the sun and the snow, and both times were just fantastic. We also love the venue itself in Elk Rapids as it offers a nice intimate concert where you can get to know the crowd. We’re really excited to play there again.”