Could Petoskey soon become a national destination for music, dance, theater and film? It may sound like an ambitious vision, but the folks at the nonprofit Great Lakes Center for the Arts think they can pull it off. The group is entering the home stretch of an effort to create a world-class performing arts venue in nearby Bay Harbor. We asked Executive Director Jill O’Neill and Marketing Director Beth Anne Eckerle to give an update and look ahead to the inaugural 2018 summer season. 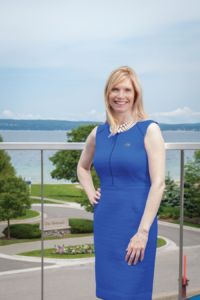 So the building itself sounds like it’s going to be something pretty special. Can you give us a little preview?

Well, the heart of the building is a state-of-the-art 500-seat theater, but there’s also a community engagement room for educational programs. It also has a 4,000-square-foot rooftop deck with views of Lake Michigan that will be a gathering space before and after performances and during intermissions. One of my favorite features of the building is that, structurally, it’s really a building within a building: The theater and stage are surrounded by an acoustic isolation joint, which protects it from outside noises that may be generated in the perimeter buildings. We also love that the materials we’re using are inspired by, and come from, the Great Lakes. For example, our facade has traditional Fond du Lac stone, so inside and out, it really looks like a building that belongs on the shore of Lake Michigan.

Many arts organizations might eventually evolve into something you’re trying to start from scratch. So what are the challenges of beginning with a bang?

Well, the challenge we face constantly is time. This is really ambitious and it’s rare that an arts organization starts something like this brand new. So the momentum is really important, and we’re happy to see that we’re on schedule. We’re lucky in that we have really talented, experienced guidance: Michael Kaiser, who is our lead strategy consultant and our founding artistic director, has an incredibly deep biography in arts management. He ran the Kennedy Center in Washington, D.C, and has worked with the Royal Opera in London and the American Ballet Theatre. He’s not only working with us on the overall building design and the programming, but guiding us in how you build a sustainable, thriving arts organization from the ground up. 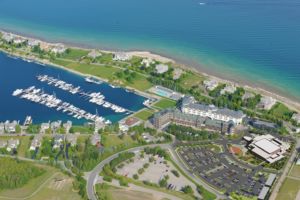 A bird’s eye view of the site plan

Northern Michigan definitely has a strong arts culture, but we’re still a relatively small community. Did you take cues from similar places across the country?

We did a number of case studies on venues in communities that have the resort dynamics we have in Northern Michigan. The Aspen Music Festival and the Aspen Institute is an informative model that many of us are excited about. If you think of Aspen 30 years ago, it was a fairly sleepy ski town. And it has broadened its reach and exposure through doing exceptional art and intellectual dialogues. There’s also Glimmerglass—a nationally acclaimed opera venue in Cooperstown, New York, which has a year-round population of 3,000. Yet the art they do is compelling, and in that instance, people certainly travel to it. It receives regular New York Times coverage because of the caliber of the art they present.