The Accidentals on a New Coming of Age Album Enjoy amazing music by various bands, local eats and all of the beauty and activities of Fountain Point Resort beginning at 2 p.m. and culminating in an exciting live performance by The Accidentals at 6:30 p.m. Bring your lawn chairs, food (if you choose) and drinks, and enjoy the day!

Come for the full day of festivities ($50, paella included) or just for the album release concert ($20). Tickets are available at MyNorthTickets.com.

Check out this interview MyNorth did with The Accidentals in November 2016 while they were recording Odyssey, and listen to their hit song, Michigan and Again.

The phone is crackly and the mountain studio near Asheville, North Carolina threatens to fully envelop the young female voices hunkered inside. Small talk seems an unnecessary prelude, however, as we start talking new album. Phone reception, distance, and our unfamiliarity evaporate. The Accidentals are coming into their own with a bold maturity that defies their youth. After an intense summer on the road, Savannah Buist and Katie Larson, both from Traverse City, are now battened up in an Echo Mountain studio recording what they immediately label their best album yet. As it is for any up and coming band, the balance between an inevitable organic evolution of sound and the protection of identity is critical. Theirs is a sound that has been defined as genre bending, but I have to wonder if their unique edge is hard to maintain as they become more popular. The notion of fame doesn’t seem to phase either one, however, even though they are on the cusp of signing a major record label out of NYC. (Formal announcement coming mid-November!) For both the self-proclaimed introverts, it is all about their message and their artistry. 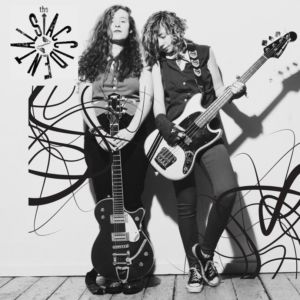 Prolific instrumentalists who met in high school while at the prestigious Interlochen Center for the Arts, the duo learned early on how to stretch the way they used the cello, the guitar or the violin to fill a multitude of roles in any one song. The fresh approach of placing the cello in the base line helped to give The Accidentals, who added instrumentalist Michael Dause to the band in 2014, their unique sound. Recently, struggling in studio with an electric guitar base line, it was just the element that got them back on track. “That’s the organic piece,” says manager and Sav’s mom, Amber Buist. “Electric would have made sense, but not for this band.” The younger of the duo, Larson, pulled the brakes in studio and brought it back to the cello. “And suddenly,” remembers Amber, “We had Accidental sound.”

Now, for perhaps the first time, The Accidentals are starting to find a common thread in this, their fourth album to date. Though still in the middle of recording, the band agrees the new album showcases a new type of cohesion running through the tracks—something they have admittedly never had before. “You can finally hear an Accidentals live show within the album,” says Buist. “They have figured out their instruments, they have honed their originality and now they are able to really apply their voice,” says Amber.

It is an exciting next chapter in a journey that has had the band at the forefront of their hometown’s music scene. The popular group labels the support and collaboration they receive from northern Michigan as unmatched and the inspiration for their love ballad to the area, Michigan and Again. And for all those fans who still send gas cards, host them for free, and show up at shows in VW buses to make them grilled cheese, The Accidentals offer a heartfelt thank you.