An Uncommon Adventure: Go on a Wine-Tasting Kayak Tour 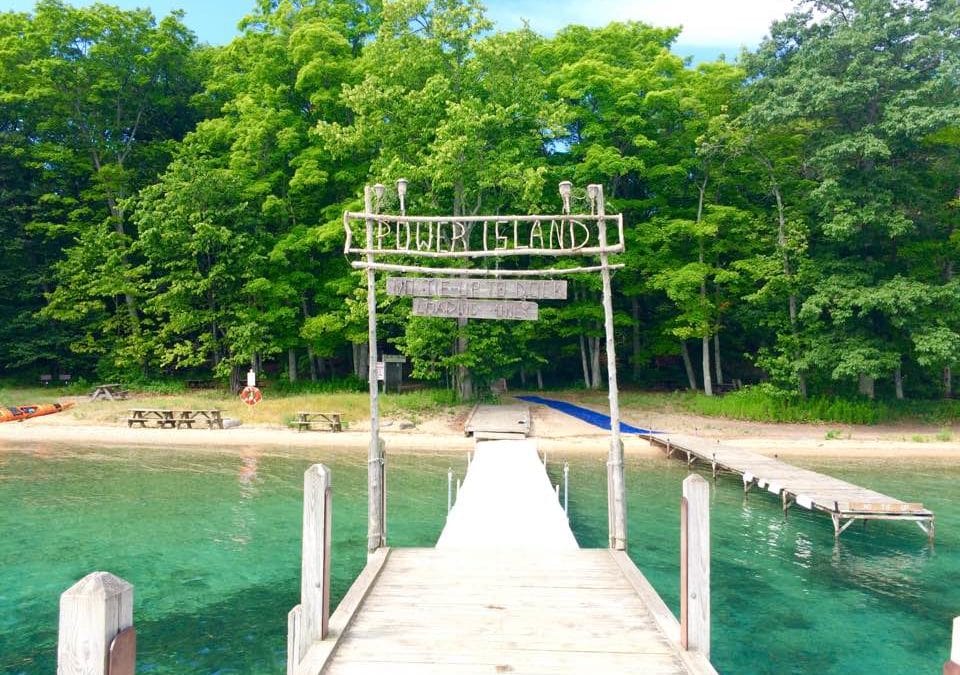 From Alaska to Honduras, Greenland to the Florida Keys; Michael Gray has been around the world and back again with his company, Uncommon Adventures, leading kayak tours in some of the most isolated waters in the world. For the past five years, between traveling to various countries, he has come back home and continued his tours in and around the Great Lakes.

I met up with Michael, and a group of customers willing to let me join in, and paddled along on his Water to Wine – Wine Tasting Kayak Tour last week to give you a firsthand glimpse at what it’s like to paddle with a professional kayaker.

It’s 9 a.m. on a Tuesday morning as I travel up Old Mission Peninsula. About 10 miles north, I stop in the back parking lot of the Peninsula Grill and open my door to the crisp morning air.

Only a few cars sit in the back corner of the lot, including a silver Colorado, parked in the center, with three brightly-colored kayaks resting atop the extended trailer, easily taking up two-to-three unused parking spaces. It had to be our guide, but there was no sign of human life. I ventured around the trailer, pretending to inspect the kayaks. 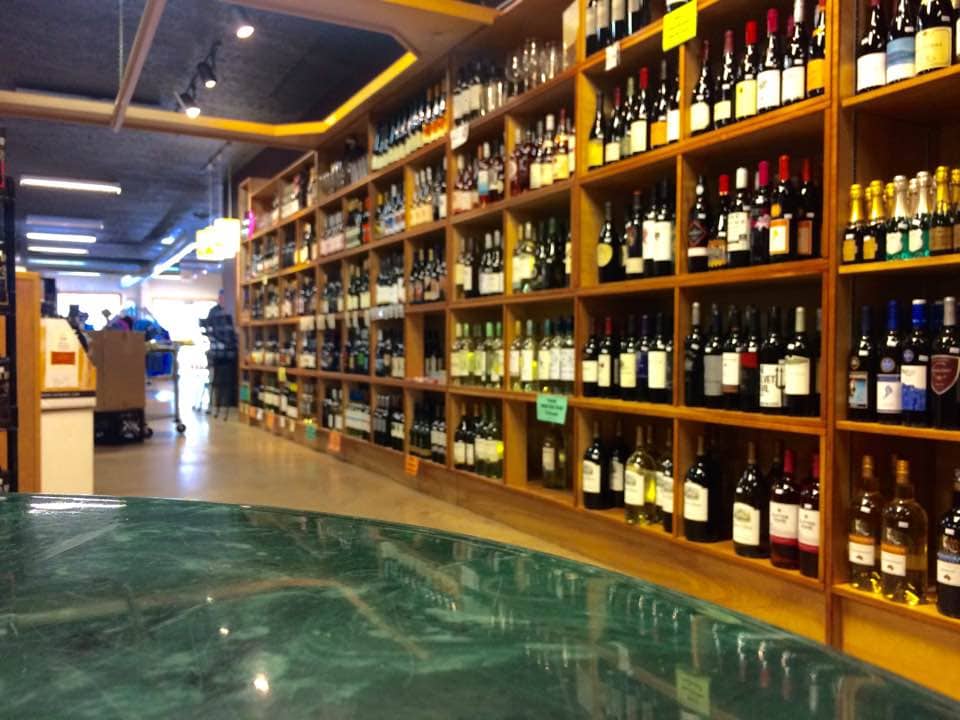 Next door is the Peninsula Market; he must be there. I head inside and quickly find a small group congregated in the back corner of the market where local wines cover the walls. Michael waves me over to the powwow. He’s wearing a light blue Under Armour fleece shirt, flip-flops and a red fishing hat. His sunglasses dangle from his neck just below his all-white goatee.

I’m introduced to the girls: Shelly, Karen and Leslie, three young mothers who left the kids at home with their dads to enjoy a day to themselves. They joke about having little faith in their husbands to keep the kids alive, and I remember from my younger years a time when my best friend’s mom left for a week. All we had to eat that week was pizza, and to this day he won’t touch any form of the doughy goodness.

Back in the marketplace, Michael continues his discussion of the local wines and which ones he thinks the ladies will prefer. He points out several bottles and mentions sweeter rieslings and dryer reds, something I know nothing about.

“Make sure you grab a water,” he says as the group disperses around the store. “People always forget to hydrate. It’s very important.”

I later find out that Michael started this company when he was 23, having been routinely criticized by his father to get a real job. “That was until I turned this into a real job,” he jokes.

Since then, Michael has developed his love for kayaking into a worldwide company.

“Greenland is the most fun for me,” he tells us. “Being the first human to set foot on a piece of land or ice is a pretty humbling experience, and not many people get to have that feeling. I want people to get that same feeling of doing something new again.” 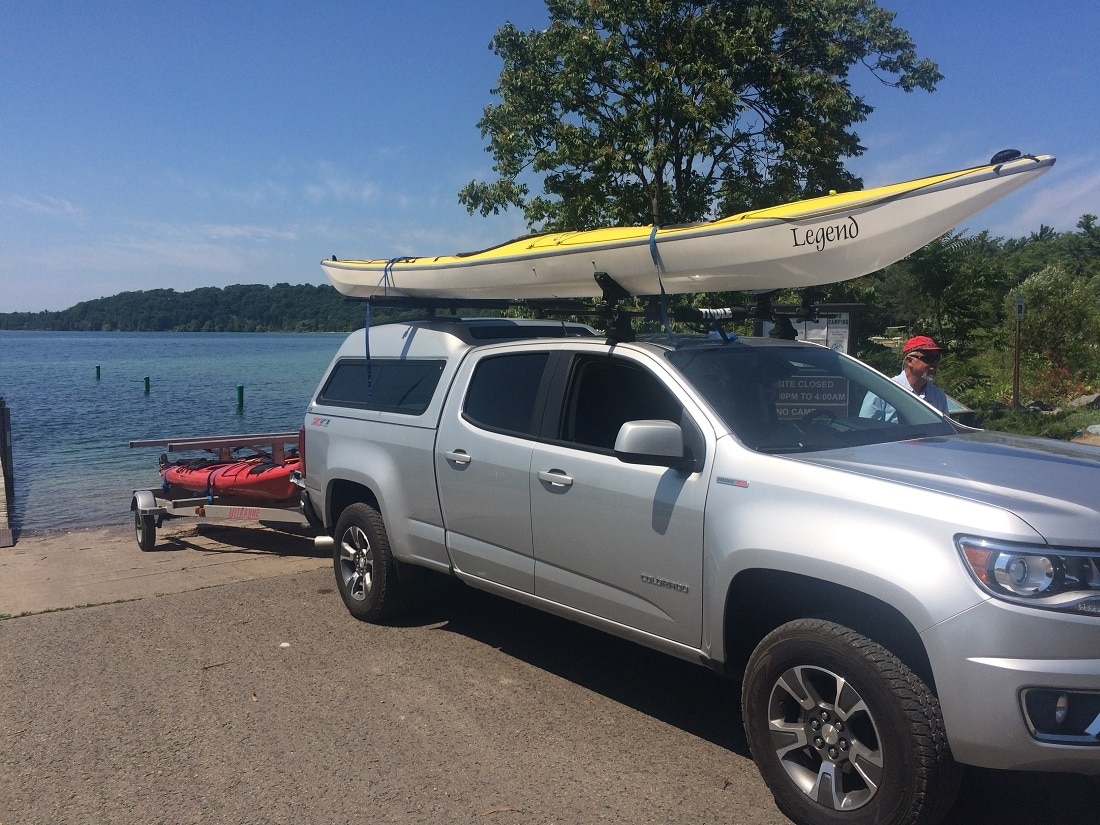 Once everyone is geared up and empty-bladdered, we follow the silver truck down to the Bowers Harbor Boat Launch a quarter mile west of the market. Here the chilling air is a bit stronger and the clouds have piled on top of each other, all but blocking our hopes for a sunny day on the water.

“We should have taken a shot or something before we got on the water,” one of the women jokes, and while they’re laughing Michael chimes in. “If you had done that, we would be canceling this trip.”

For the most part, he’s packed full of jokes and stories from traveling all around the world, but when it comes to safety on the water, Michael is very serious. So serious that he would prefer you to walk around the kayaks instead of jumping over them, in fact, insisting that you walk around. “We take safety very seriously, but it’s more than that,” he tells me as we haul the tandem kayaks into the water. “Teaching people how to use the gear properly makes the whole day better. They arrive here in good condition and we want them to leave in the same condition.”

Before hitting the water Michael instructs us on how to properly strap a life jacket, the correct way to paddle so we don’t strain our upper body—”going zombie,” he calls it—and how to get in and out of the kayaks so that tipping out is almost impossible.

For the first half of our trip, we stick to shallow waters to avoid the high winds and any speedboats that may be accelerating past. The waves, rolling about a foot high, occasionally reaching over the edge of our arrowed vehicles, remind us that this is a wet sport. 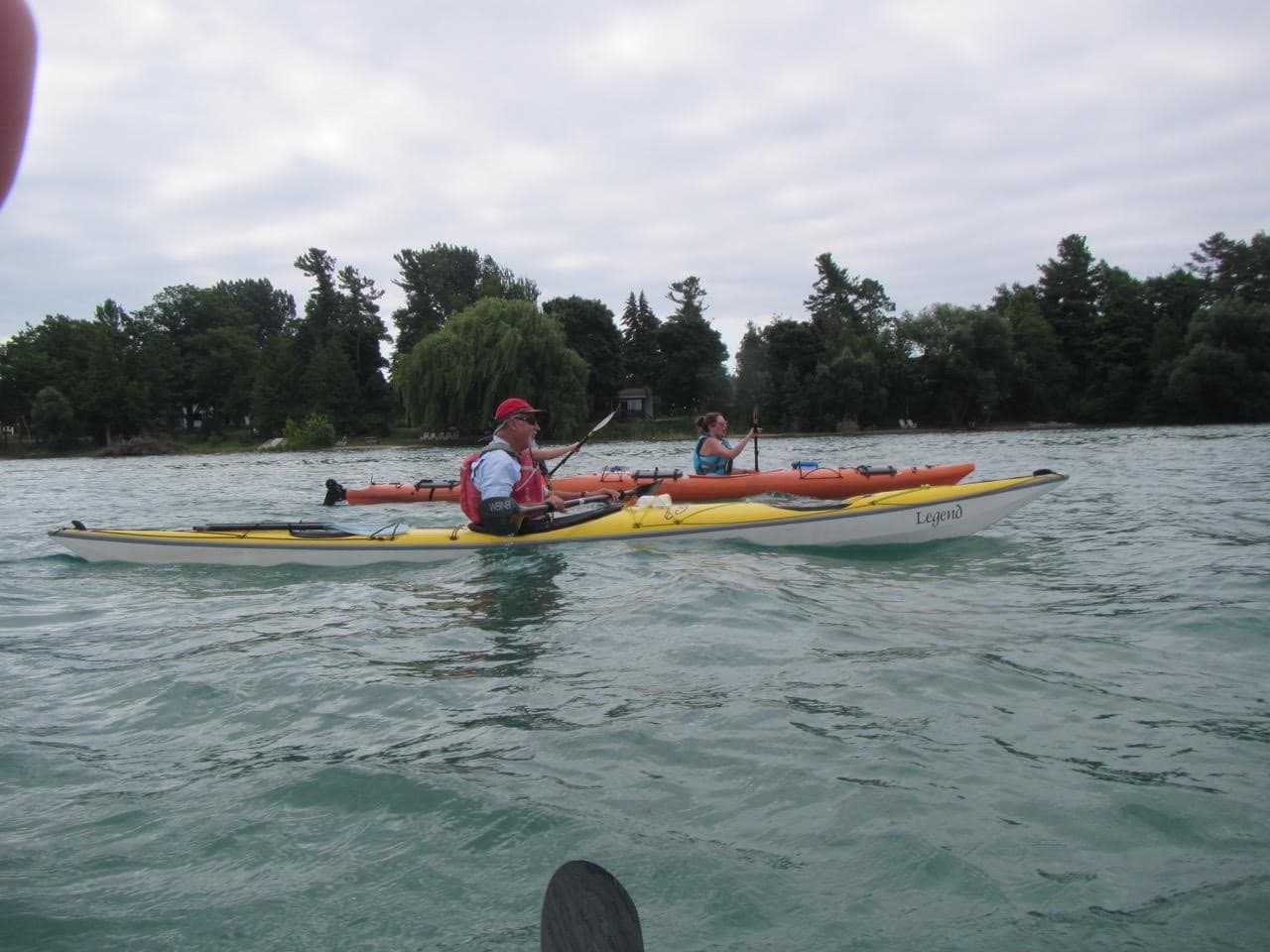 “Acquiring target,” Michael shouts across the water as he points toward an anchored sailboat in the distance. “It’s good to have a target for where you’re are going,” he says, pausing in order to squint out on the big lake. “Just like anything in life really.”

Most of the trip is filled with comments like that or unbelievable stories that only a true water-man could tell. In between paddling or setting a new target Michael shares stories of longtime friends. One is about sitting in a bar when Jimmy Buffet and several authors walked in and they ended up fly fishing together at two in the morning. Another’s about a good friend that was a merchant marine who built his own submarine, which Michael traveled in, of course. 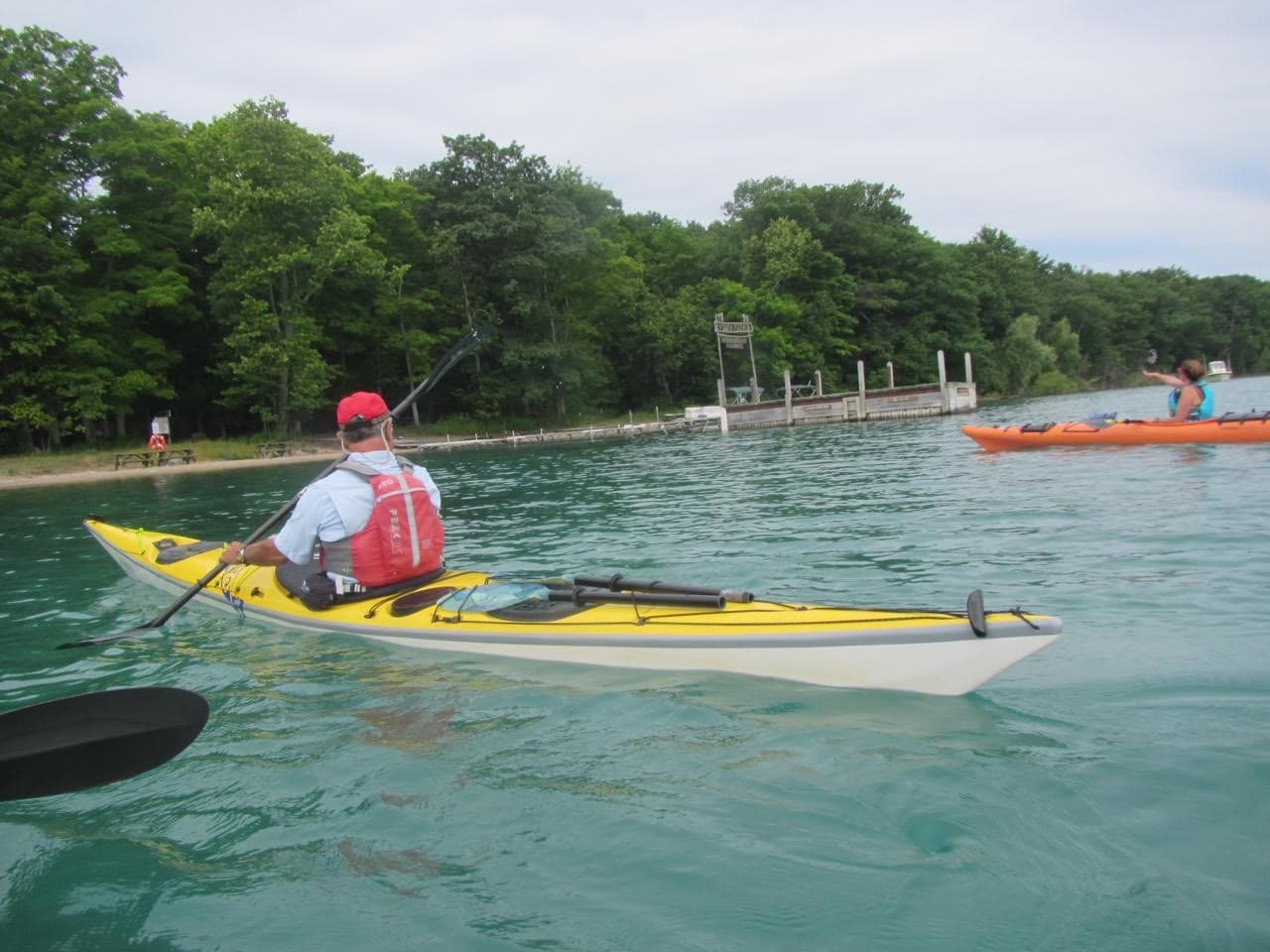 “I don’t know whether to believe all of these or not,” Leslie laughs after a story of drinking whale penis-soaked alcohol in Greenland. I laugh, but can’t help but feel the opposite. Michael has traveled the world for more than 30 years, venturing out in some of the most exotic waters on the planet. Of course, to most of us, these stories couldn’t be true because they didn’t seem realistic. To Michael Gray, they’re a part of his everyday life.

“Having been on a lot of these trips more than a dozen times, I get to know the area and people really well,” Michael says. “On Isle Royale people ask me things about the wolf-moose study that’s been going on longer than any other predator-prey relationship study on the planet, and I could answer their questions, or I could just take them to have tea with Ralph and Candy, the people who have authored it for the last 50 years.” Again, there is a moment’s pause for him to monitor the water and instruct Karen on her hand placement on the paddles. “It helps that they are good friends of mine,” he smiles, more than likely reflecting on a time spent together. 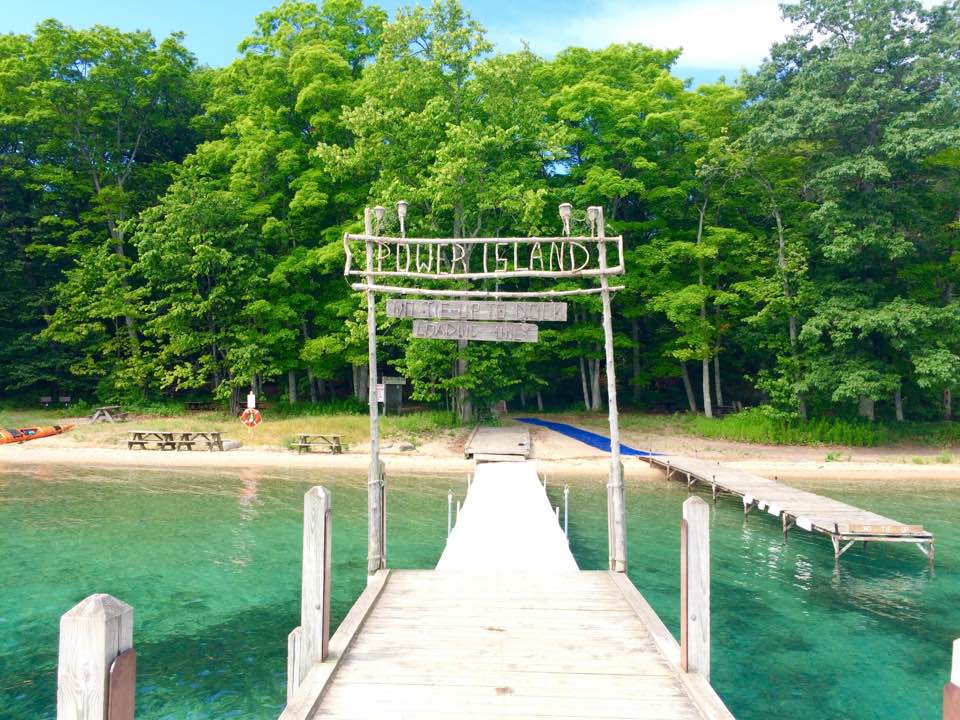 As he finishes his story we come to our final target, a large beach sprawled out along the shore line of a small island in the middle of West Grand Traverse Bay. As we kayak closer, Michael reminds us to avoid other beach-goers and boats.

“Don’t forget to lift those rudders up,” he instructs. Almost on cue with our arrival the sun begins to poke out from the overbearing clouds and more and more people begin to populate the beach. He tells the ladies they can wander the island for a half hour or so while he is setting up our lunch, and I use this as a perfect time to get an insight into his love for food. 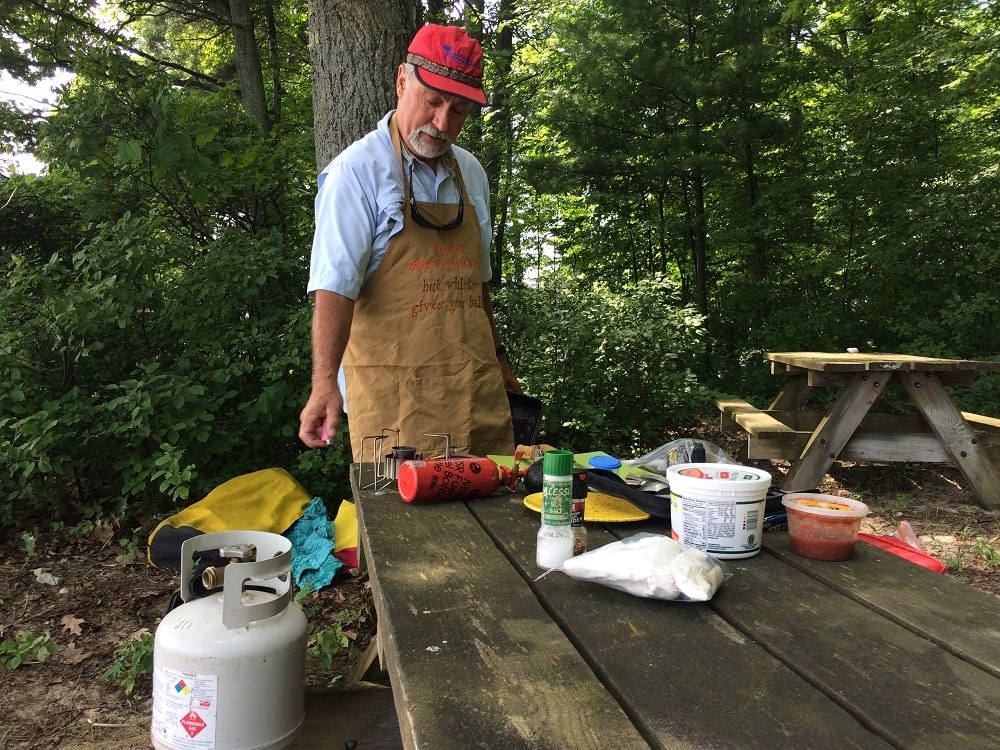 Before I know it he has an entire kitchen laid out on the cracked wooden picnic table and a brown apron that reads, “RedBull may give you wings, but whiskey gives you balls!”

“Our trips are known for having good meals,” he explains as he hands me a few red, yellow and blue plates to set on the table. “We don’t get many vacations, so I always feel like we need to spend them wisely. I try to make our trips special and food is a powerful tool.” He unfolds his packed grill and propane tank, lighting the burner as he talks.

“I want people to say, ‘We actually had nice food!’ For me, the extra work is worth it to make something special for them. It’s kind of a special event meal, a birthday thing, anniversary, and a lot of people treat it as such.” He hands me a few forks then proceeds to lay out a wonderful spread of cheese, crackers and grapes in the middle of the table. 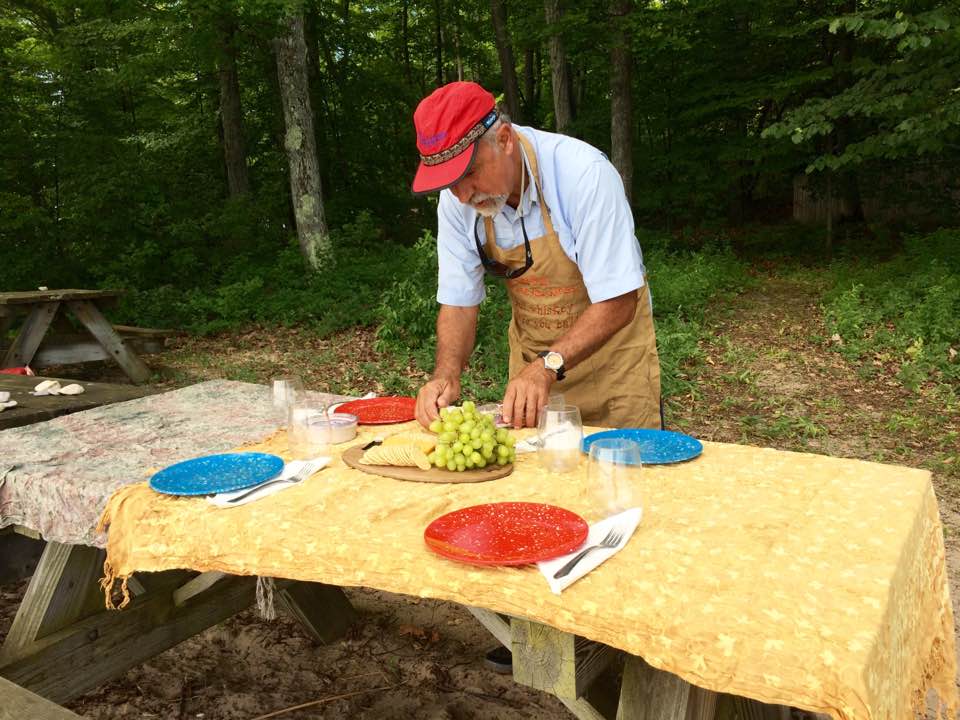 When the girls get back he has a few bottles of wine for everyone to try. One of which, a past customer created for him and he used the label as the cover design on his outdoor cookbook, “Hey, I’d Eat This at Home!”

As he cooks, and we munch, the weather becomes even more dream worthy and the water begins to reflect an emerald hue. Michael proceeds to tell us of the Argentinian dish called Churrasco we are about to eat and how to properly prepare it for a meal on the beach. We have a wonderful lunch with wine and cheese and Churrasco and shrimp tacos and conversations that leave us laughing.

The return trip is everything you hope for when you purchase an Uncommon Adventure. The water is a shiny green near the shorelines and dark blue near the middle. There is almost no wind to go along with no clouds and as we paddle back toward our original take-off point we hear more stories of trips from the one and only Michael Gray. 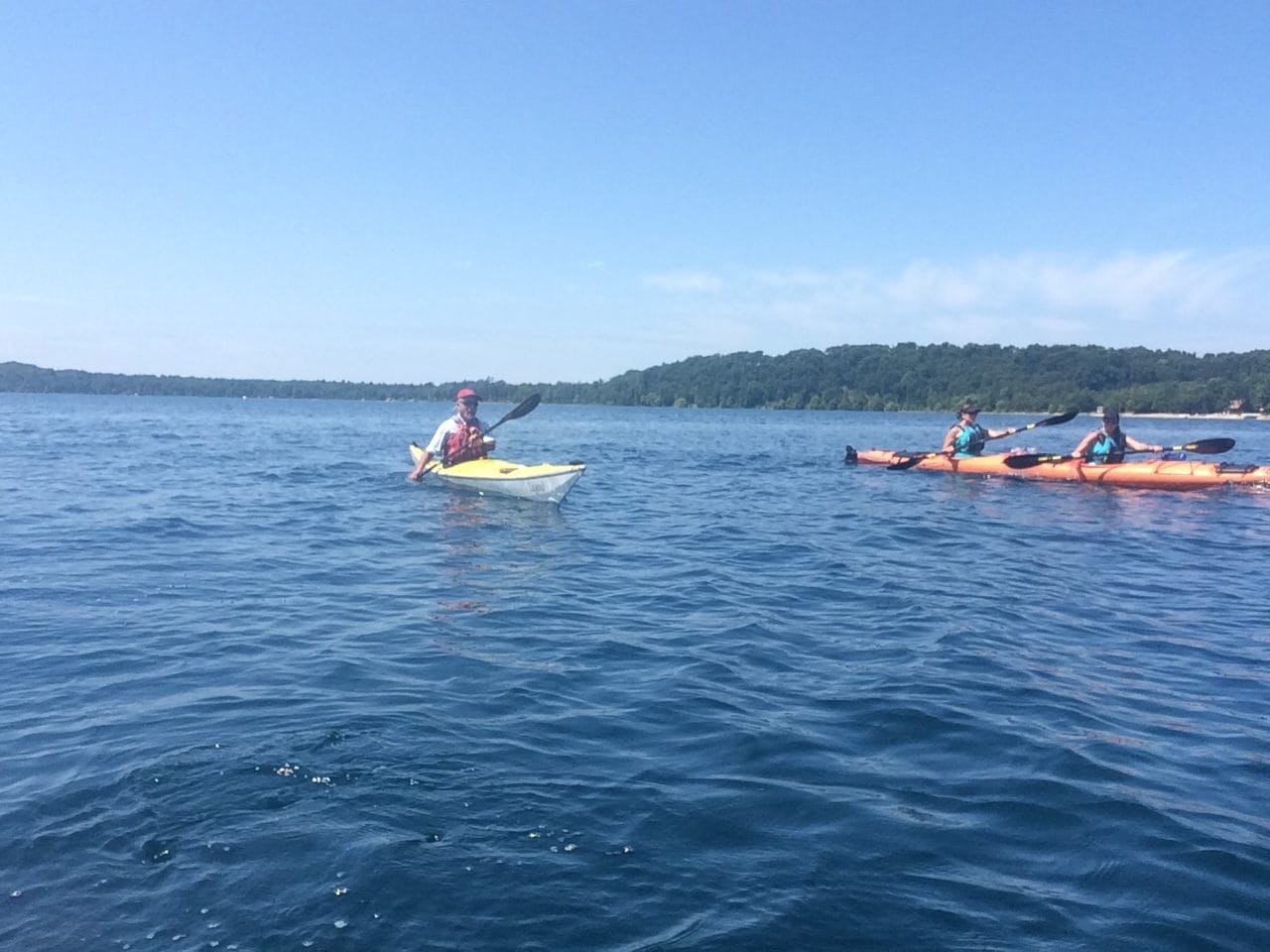 By the time we land on shore and pull the kayaks back onto dry land everyone seems to be exhausted, and a little relieved that the nearly 8-mile trip is complete, including me. My body wasn’t quite sore but it most definitely knew that we had just kayaked! The beauty of Uncommon Adventures is that although we had landed and were back in dry clothes, the trip was not over; now we’re going to the wineries. 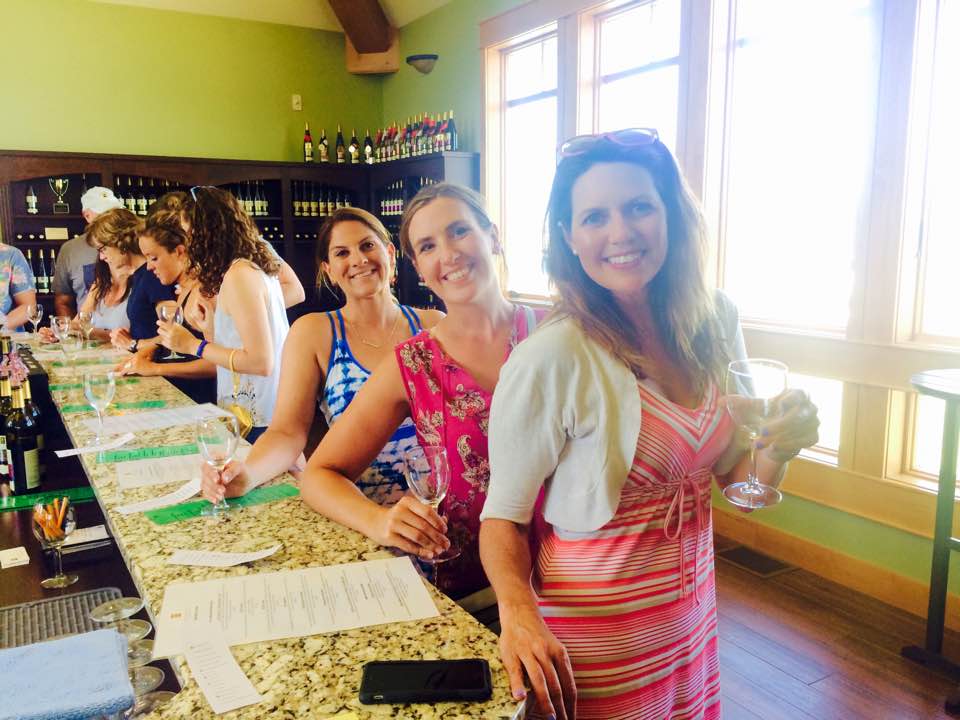 The first stop is Hawthorne Vineyards. Inside, the walls are wrapped with wine bottles and a round-top bar circles the center of the fishbowl room. Michael pays for the tasting, as part of his Water to Wine package and everyone splurges on a bottle of Hawthorne’s reserved pinot noir.

The last stop of this very uncommon adventure is Left Foot Charley. Our waitress is a pleasant young woman who knew we were coming and had everything prepared when we walked in the door. While the girls enjoy unique cheeses and discuss their favorites in the world, I soak in the atmosphere. 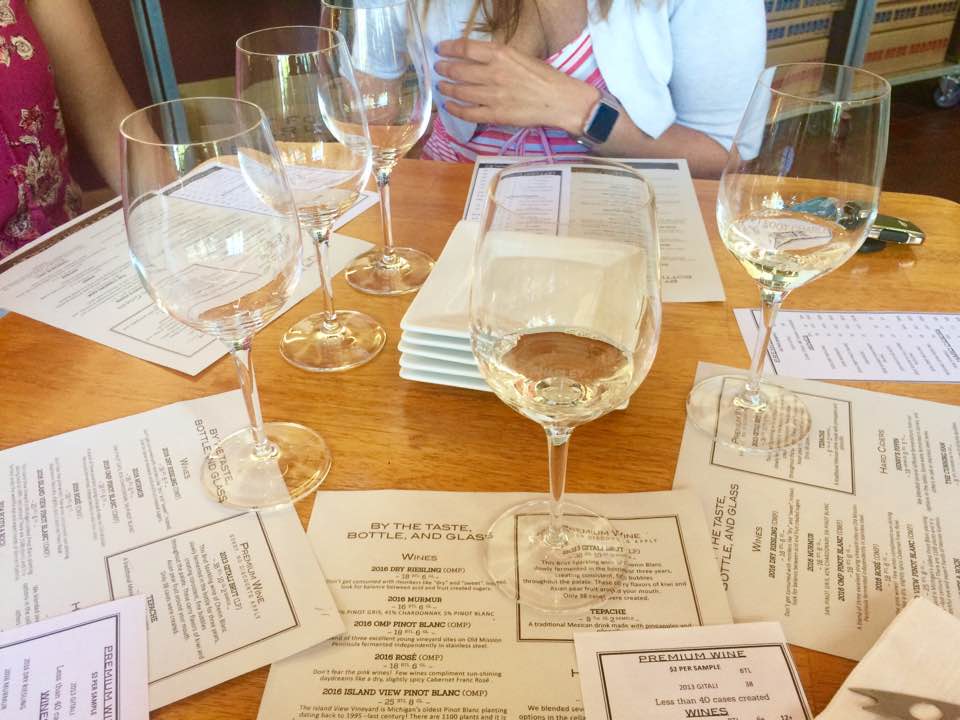 Everyone had a sense of pride after having conquered the long journey out in the bay. Wine glasses were raised in our honor and a few extra bottles made their way to the table.

If you like kayaking, wonderful food and great wine, Uncommon Adventures is your kind of trip.