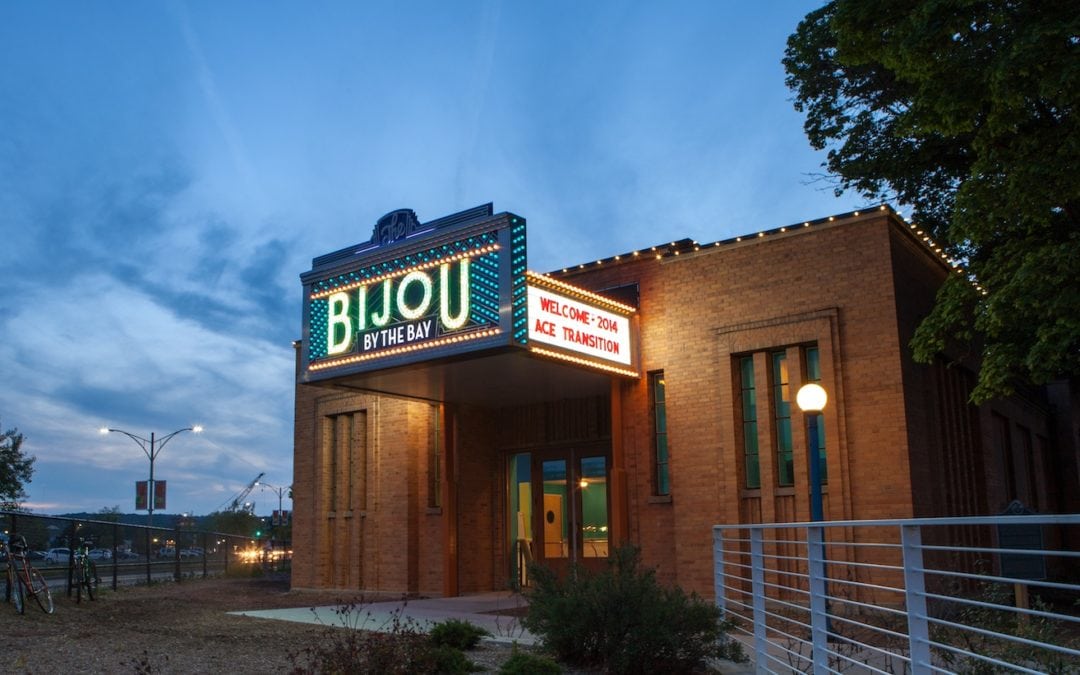 Traverse City Film Festival venues offer exceptional audio-visual technology, comfy seating and historic charm to your film-viewing experience. The festival is chock-full of features ranging from laugh-out-loud comedies to moving documentaries. Plus, pre-festival screenings will take place across Northern Michigan—find the Around the Bay showings here.

Corner of Union Street and Grandview Parkway
One of Traverse City’s most beautiful and versatile public gathering places, the Open Space is the place to be each night of the festival for free, larger-than-life screenings. Films will be projected onto a 65-foot inflatable screen next to West Grand Traverse Bay near downtown Traverse City.

223 E Front St.
The beautiful home of the Traverse City Film Festival, the State Theatre is a Traverse City landmark. Originally built in 1916, this theater was restored to its former glory by Michael Moore and an army of volunteers. This 527-seat movie house is the perfect place to view a movie and was named #1 movie theater in the world by MPAA.

Bijou by the Bay

181 E Grandview Pkwy.
One of the newest editions to the Traverse City theater lineup, the Bijou By The Bay was renovated and opened in 2013. Located in the historic Con Foster Museum in Clinch Park, the Bijou is operated year-round by the community and is considered the State Theatre’s little sister.

106 E Front St.
The City Opera House became the first commercial building in Traverse City to make use of electric light in 1897. After closing down in the mid-forties and reopening in the mid-eighties, the Opera House has encountered numerous renovations and changes, including balcony seating and a grand entrance.

148 E Eighth St.
The Old Town Playhouse was founded in 1960 to bring civic players to Traverse City via an amateur theater program. With 250 brand new, State Theatre-style seats, the playhouse is one of the festival’s most comfortable venues. Located just a few blocks south of downtown.

301 W Seventh St.
Lars Hockstad Auditorium has been rebranded. This year-round host to numerous professional and student stage productions and concerts was recently renovated by the community thanks to a grant from Michael Moore. Enjoy the new seating at the festival’s largest indoor venue.

1701 E Front St.
Just steps away from the Milliken Auditorium, the 118-seat film school brings together students of all ages and experiences who are eager to learn about the craft of filmmaking. Classes will be offered twice daily Wednesday through Sunday.

Click the cover for your FREE insider’s guide to the festival!