Little Manistee River Weir Attempts to Save the Fish & the Water 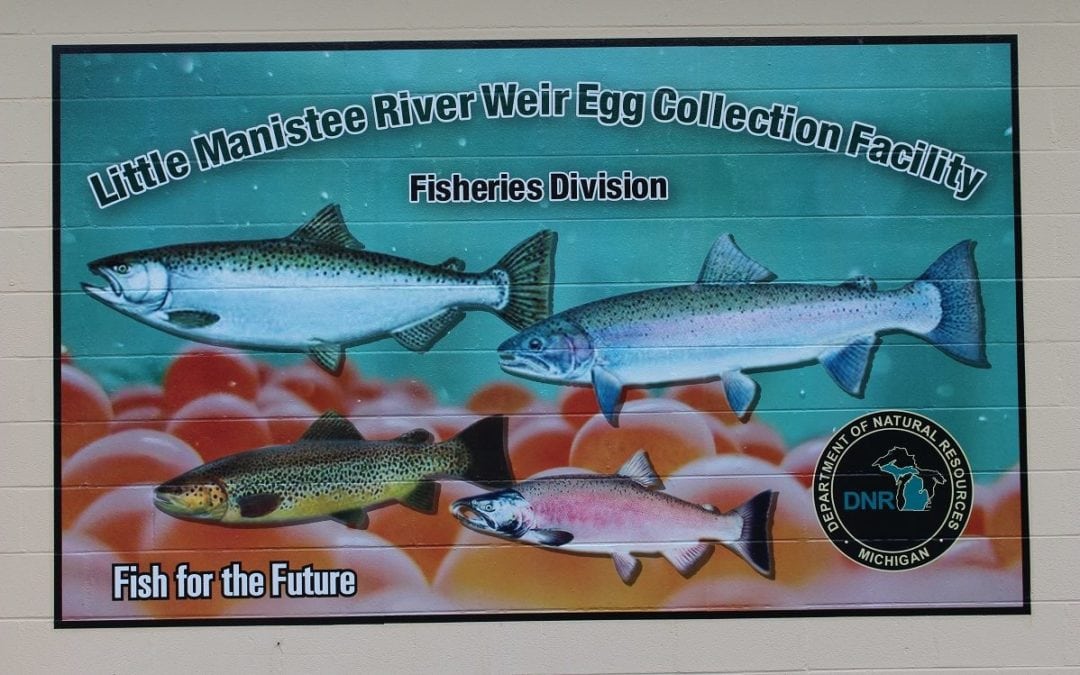 During an incredible immersion day in Manistee, the MyNorth editorial team headed out of town, into the woods and along several dirt roads to the Little Manistee River Weir where we met with several community members who are devoted to preserving the Manistee watershed and all of its inhabitants.

Throughout the day we visited several businesses along Main Street in Manistee—The Fillmore, Synder’s Shoes, Vogue Theatre—led by our guide Tim Ervin, one of the most connected consultants in Northern Michigan.

Officially, his title is unknown even to himself. “Makes me sound like I’m a day away from hospice,” he jokes. But his knowledge of economic development in Northern Michigan and connections in the environmental world are unmatched.

[Read Tim’s piece on the resiliency of the Great Lakes] 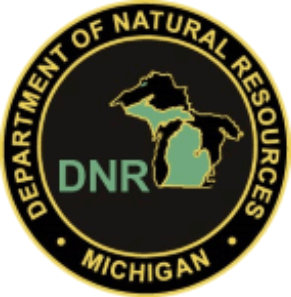 Tim gathers us all around a small wooden gazebo with large plaques on the inner wall that explain the Little Manistee River Weir and the benefits of its location. “This is one of the several Explore the Shores sites located along Manistee County lakes, rivers, beaches, marinas and marshes,” he explains. “Their goal is to make the places along the water where people commonly visit more accessible for everyone with better equipped restrooms, pathways and gazebos like this.”

As Tim talks a few people gather behind him, seemingly waiting to join the conversation. Among them; Joyce Durdel, head of the Little Manistee Watershed Conservation Council (LMWCC) water quality control, also known as the “bug lady.”

The facility, built in 1967, was designed to stop fish and collect eggs from salmon and steelhead. “It’s a beautiful river to live on, and finally after many many years of having very rough accommodations for people and classrooms and school groups that come through the Explore the Shores program, I think we’re finally getting there,” Scott Heintzelman says.

He points toward a new observation deck that overlooks the river and the weir operation explaining the new pathways are handicap accessible for people to see the fish when they’re running up stream. “This program has been a huge improvement,” he adds. 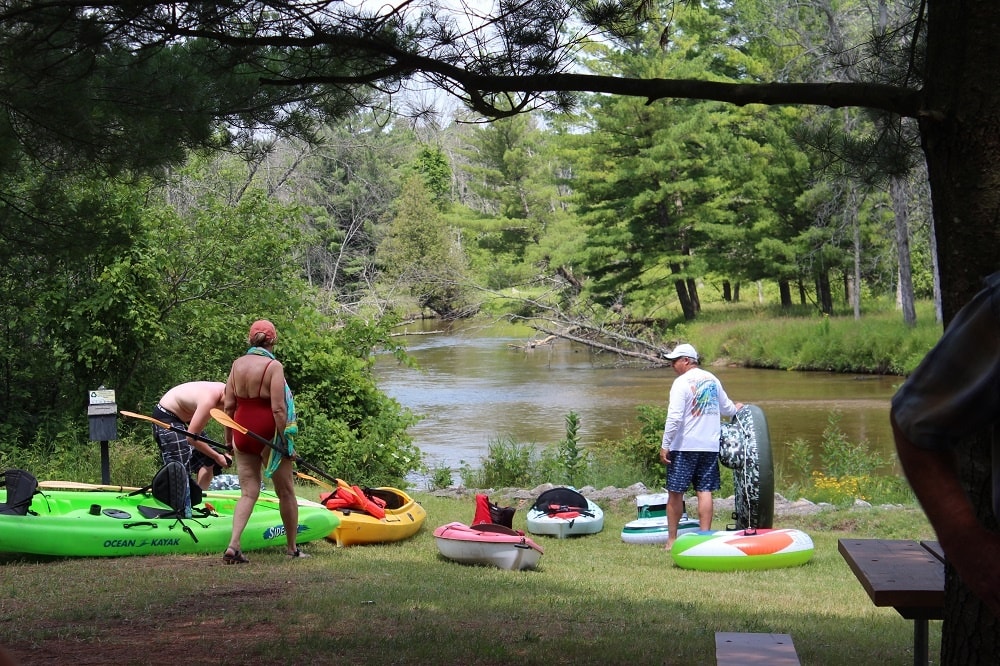 While Scott and Tim talk about making these facilities more accessible, as if on cue, a line of vehicles come down the gravel pathway and park behind us. A large group begins to pile out carrying kayaks and coolers and a bright labradoodle that jumps onto its owner’s chest. We continue talking and the family—kids, mom and dad, grandparents—put their kayaks in the river. 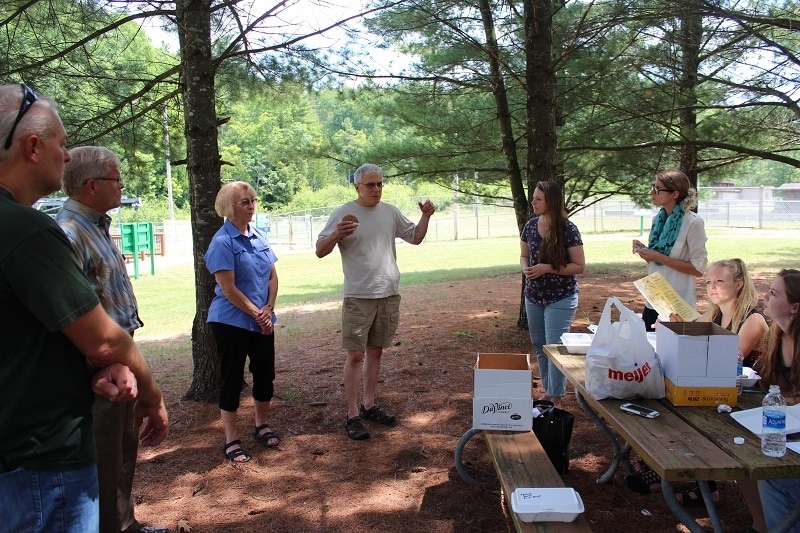 “In Northern Michigan, the biggest source of pollution is runoff, which can cover spawning grounds for trout,” Tim says. “The name of the game is to have watershed plans that address the real issues and to have volunteers who selflessly give to implement that plan.”

He motions toward Joyce and Armas, who have been volunteering their time for nearly 10 years since they both moved in to the Manistee community. Right now the LMWCC does not currently have a watershed plan in place and the power comes from persuasion. Joyce hands us all a copy of their watershed management plan which they have been working on getting approved for quite some time.

“Water is a basic, basic need,” Joyce says. “We are very fortunate to be in this area and we need to do everything we can to keep it stable.”

The best watershed plans include public input and a strategy of action and data, like the information that comes from the egg-take facility. Scott later gives me a tour of the facility and explains its intricacies. 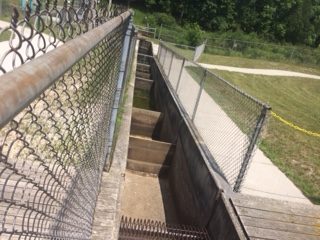 “Once the grates are down, the trout accumulate in this little pool, and when we turn the pumps on the fish start running up these boards, creating a fish ladder,” he says. He leads me along the ladder which is a long water hallway with wooden boards that build up to the tanks in order to hold the fish. It looks like a miniature Sault Ste. Marie. “Migratory fish follow current, so all we have to do is turn the pumps on and flood the place and they swim right in.”

The facility holds steelhead, lake trout and Chinook, taking eggs from all three species and releasing the trout that are able to return to the wild. “The point of this facility is to supply areas that lack natural reproduction,” Scott says.

In earlier years, some 40,000 trout and Chinook would run up the Little Manistee, but recent lows have reached a dwindling 1,000 or so. Because of this weir, populations have risen again and the facility supplies eggs to rivers and streams across the entire state. “This is a broad stock river, and fish can naturally reproduce here. So all of the sacrifice out of this river is beneficial to others around the state that don’t have the same water quality for fish.” 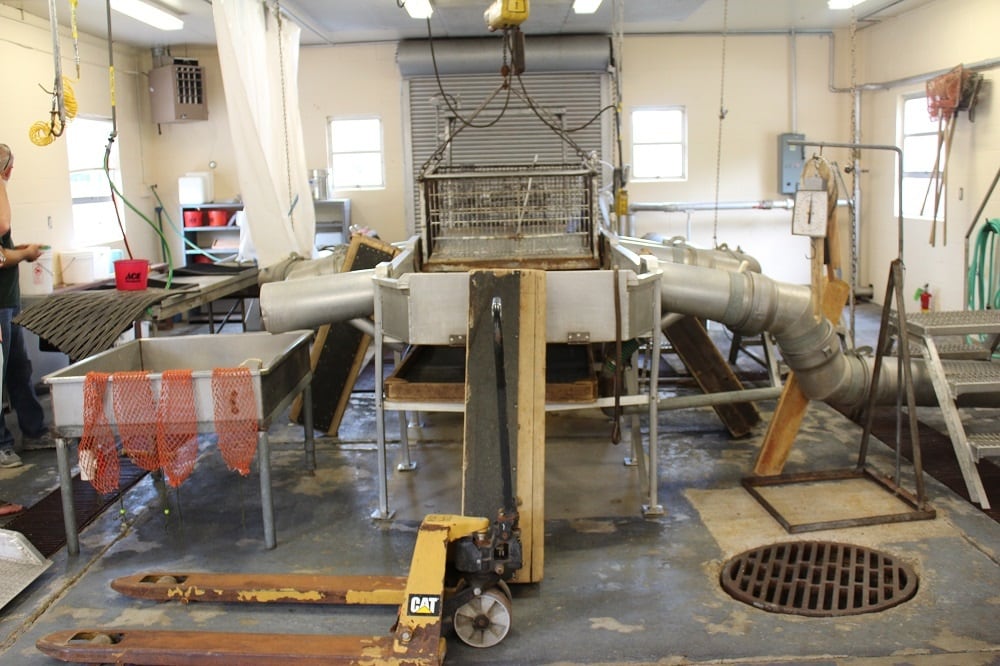 Scott continues to explain the process as he unlocks the doors and lets me explore the actual facility. It’s quiet inside, and our voices echo around the open space and metal machines that engulf the room. “When we’re up and running, we open the door, lead the fish into a large bucket that has CO2 gas in it, which knocks them out, then we are easily able to sort them to get what we need. We usually blow the eggs out with a small amount of compressed air inserted under the pectoral fin. That results in less injury to the fish and the eggs,” he says. “Just that little bit of pressure will shoot the eggs right out into our buckets. After that, we squirt some milt from a male into the bucket.”

“Within 30 seconds we can fertilize an entire bucket of eggs.”

One drop of milt, “like the tip of a pin,” is enough to fertilize an entire bucket of 5,000 eggs/fish. “Basically, within 30 seconds we can fertilize an entire bucket of eggs.” he says. He goes on to explain how they add saline solution to the water to increase the vitality of the fertilization process, then the eggs are rinsed, water hardened and transported to the hatchery where they’re raised and cared for until they hatch. 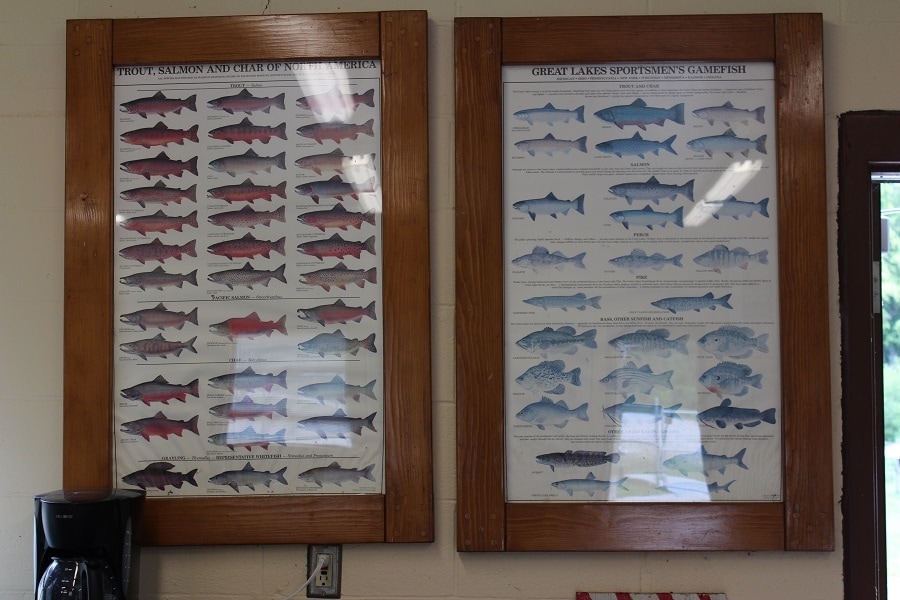 A typical year at the Little Manistee River Weir sees some 3 to 4 million eggs pass through, per species, and the majority of those fish are relocated to different rivers and streams all across the state. It’s safe to say that without egg-take facilities like this, our populations of lake trout and Chinook could be virtually non-existent due to the deleterious effects of invasive species like zebra mussels, sea lamprey, round goby and Asian carp.

Thanks to the combined efforts of these groups, and others like them all across the state, the ecosystems of our waters are staying safe and enjoyable for us and sustainable for the species that live within them.

“Every ecosystem is fragile, and if you tip the scales one way or the other you can really change things drastically.”