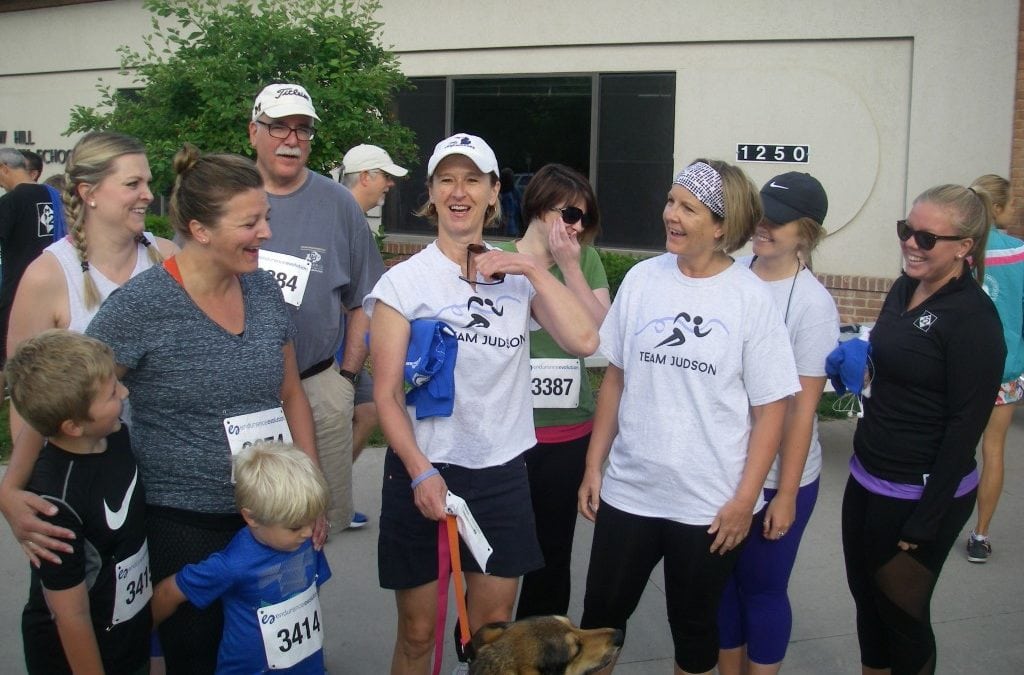 Race director and Director of Advancement Sarah Kime, and volunteers from the staff of Goodwill, welcomed over 182 racers and walkers to the 9th annual Goodwill of Northern Michigan Run for Shelter 5K, Traverse City, June 24, 2017, starting and finishing at Willow Hill School and conducted through the neighborhoods, along the bay and through Hickory Hills. They raised over $15,000 for the Goodwill Inn, which equals 405 nights of shelter for our neighbors in need.

Why does Smith Haughey Rice and Roegge support Goodwill? I chatted with Janis Adams, who walked the 5K with her family and was joined by 20 of her co-workers in the event. “We strongly believe in supporting Goodwill. We have been a sponsor of this event for several years. When we moved into our new space on the corner of Front and Park Streets, we came to know many homeless people living by the river, under walkways and bridges. We became concerned and wanted to help. When we became aware of the Run for Shelter, we knew this was the event for us. In addition to supporting the race, we have assisted our homeless neighbors by providing food in cans and bottles and warm coats in the winter. We are a long-time supporter of Goodwill.” Thank you to all the attorneys and staff at Smith Haughey for your good works.

Another key partner at Smith Haughey is Robert Parker. Robert also walked the 5K. Robert and I go way back. His parents were my friends and associates in the Old Town Playhouse and on a political board. I introduced his sister Marilyn to one of my friends at the University of Michigan Business School while we were all attending U of M. Marilyn and Tim plan to be in TC this summer for the wedding of their daughter. Congratulations!! Bob, thanks for your support of Goodwill and thanks for sharing memories.

Dan Buron is the executive director of Goodwill. Dan’s responsibility is to build awareness and support for Goodwill Inn, the homeless shelter. Dan shared with me the main function of Goodwill. He said, “Goodwill provides hope, security and safety for people experiencing homelessness. We serve about 110 people each day and about 800 per year. Half of our funds are government supported and the other half from the public. We have 11 family units, which serve to keep the family together. We also receive needed support from proceeds generated by the Goodwill Stores.”

Ryan Hannon is the Goodwill Street Outreach Manager. He connects homeless people to resources needed to end their homelessness. Ryan helps connect them to the network such as Central Methodist Church, Jubilee House, Safe Harbor, Love Inc, Father Fred, St. Vincent DePaul, Recycle-a-Bike or others. Sue Adkins is the Goodwill coordinator for Workers on Wheels, the free car program, and she also coordinates 150 volunteers.

Let’s move on to our race “winner.” Tim Manzer, was not the fastest runner, but Tim was our winner. Tim survived a full-force, head-on collision while riding on his motorcycle. The other driver missed a stop sign. Tim attributes his survival to wearing a helmet. Tim suffered severe leg and wrist injuries and experienced an eight-year recovery period of pain and depression. Tim pulled himself out of his funk when a worker told him “Tim, you are a counselor. Now counsel yourself. He counseled himself and in spite of prosthetics implanted in his wrist and  too many pins and screws in his wrists and legs, Tim is back to running. Tim dropped from 257 pounds to 188 and is still losing. In addition, Tim’s blood pressure, cholesterol and triglycerides have dropped into the normal ranges. Tim, you are a hero and an important lesson to us all.

Race director and Director of Advancement Sarah Kime and the Goodwill Inn staff want to welcome you to next year’s Goodwill Run for Shelter. If you start running or exercising, ask your doctor for permission.

Mickey Fivenson, 75, is a stroke survivor. Mickey’s doctor credits running to his survival. He is a 100-pound loser and former director of the National Cherry Festival Races. Mickey founded the Cherry Festival Golden Mile and Wheelchair Races. He completed over 60 marathons and holds a marathon world record with sons, Zack and Adam. He has trained 150,000+ miles in 48 years of running. He took second place in his age group. If you’d like tips on running, on marathons, if you have a story to share how running has impacted your life, or if you would like coverage of your race, contact Mickey through the editor.