Creating the Sound of Music, the Work of a Soundman 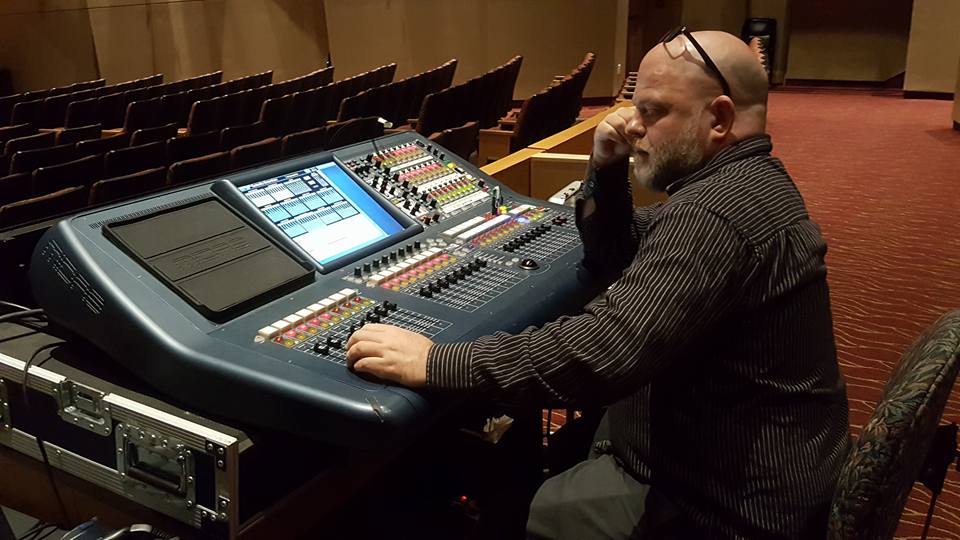 The crowd goes wild as the artists walk on stage. The singer heads to the mic and the drummer counts things off while the rest of the band watches intently. On the downbeat, the sound pours over the audience, every instrument and vocal heard clearly.

At least, that’s the hope. And while it’s up to the performers to make sure they hit the right notes at the right time, it’s up to someone offstage to make sure it all works. The sound technician is responsible for the audience hearing what it’s supposed to, whatever the size or shape of the venue. “The science of sound doesn’t change. You figure out the room or outdoors, how sound travels,” says Rick Stewart, a senior sales engineer at Advanced Systems Technology with over 25 years experience in the industry.

Those working the boards come from different situations. Dave Unger found his life’s work after being laid off from a restaurant. “Growing up in Traverse City there were not a lot of work options. I was a cook and got laid off,” he says. He connected with Adrian Maule, an acquaintance who was working for a local concert promoter. “When I walked in, I didn’t know anything about the technical side. We’d do a lot of concerts, festivals, weddings, etc. That’s where I built my knowledge.”

Over the years, Unger has provided sound for artists from across the musical spectrum. “I have really, really diverse taste in music. I toured with a bunch of African bands. I’ve worked at Preservation Hall and at the Apollo, did sound for (avant-rock guitarist) Adrian Belew. Joshua Davis and Steppin’ In It—we first met at Union Street Station,” he says.

Unger now works in Chicago at the Old Town School of Folk Music and the Chicago Cultural Center. “Twenty-plus years in the business—I had no idea,” he says.

David Greenspan is another former local who made his way into the sound business. He runs sound and video at University of Michigan facilities in Ann Arbor. “I started at Interlochen in 1986. From 1986 through 2004 I was at Interlochen Public Radio and running the sound system for most events: Kresge, Corson, the Interlochen Bowl,” Greenspan says.

He learned a lot through trial and error. The concrete walls and overhanging roof of Kresge Auditorium, built for mostly acoustic presentations, made it a particular challenge for amplified artists. “Kresge’s acoustics were god-awful. There was a six-second delay at 250 Hz. We did what we could to make it better, to enhance it without being obnoxiously loud.”

Concert promoter Seamus Shinners has been presenting shows around the area since 1991 at venues such as the City Opera House, Lake Street Studio Stage in Glen Arbor, Milliken Auditorium, the Bay Theater in Suttons Bay and Fountain Point Resort. “Through it all there has been one constant: the work of sound men,” Shinners says. He says they are invaluable. “They create the ‘sound of music’ that we all enjoy.”

Unger and Greenspan were among those who’ve worked his shows. So too Peter Wiejaczka, who says he was surrounded by music growing up. “My dad was in bands. Growing up watching the Grammys, I said I wanted to do that,” says Wiejaczka, who also credits Pat Niemisto, the music teacher at Glen Lake Community School. “He was an instrumental part in showing me the ropes and giving me latitude.” Wiejaczka helped build the school’s first internal TV studio.

Over the years, Wiejaczka has provided sound for the likes of Paul Anka, Ani DiFranco and David Foster, as well as events for Microsoft and Apple, even Presidential debates. He now lives in Chicago and provides sound for numerous venues in that area, such as Navy Pier, Ravinia and Millennium Park, as well as traveling for Onstage Audio, where he’s on staff.

Stewart says like an umpire or referee, the best sound technicians are the ones who remain relatively invisible. “The best compliment is you don’t notice them,” he says. He has designed and installed sound, lighting and video systems for churches, schools, performing arts centers, theme parks, cruise ships and bands across the US.

He’s in the thick of it from a performing standpoint as well. As executive and worship pastor at New Hope Community Church, Stewart performs with and leads the worship band. And he continues to advance his knowledge. “In the last two years with digital technology, I’ve had to personally learn eight different brands and styles. I may have 25 years of experience but I’m still learning all the time,” he says.

Stewart also finds time to school others in the art and science of sound mixing. He works with interns at his church and extolls the virtues of programs such as that helmed by Jack Conners at Northwestern Michigan College. Conners has provided sound for Interlochen Center for the Arts, the Manitou Music Festival, NMC and numerous others.

Unlike those who learned locally and moved on, Conners moved to the area after learning the trade out East. “I played bass in my teens and did sound for a recording studio in Baltimore,” he says. He and a friend started their own sound business, but schlepping speakers and other equipment from show to show eventually palled, and he went back into the studio. After moving to Michigan and then to Nashville, he returned to his home state permanently in the ’80s. Conners spent summers doing live sound and studio work at Interlochen Center for the Arts and working in Grand Rapids in the winter, moving north for good in 1999.

Today he still plays bass, and besides teaching sound at NMC he manages Milliken Auditorium and does live sound there, and occasionally elsewhere as well. He perhaps puts the role of a sound tech best: “I find it a challenge but so rewarding. The goal is always the same—to provide good sound and a good show for the audience.”