Cooking Over Wood Flames with the Grillworks Family 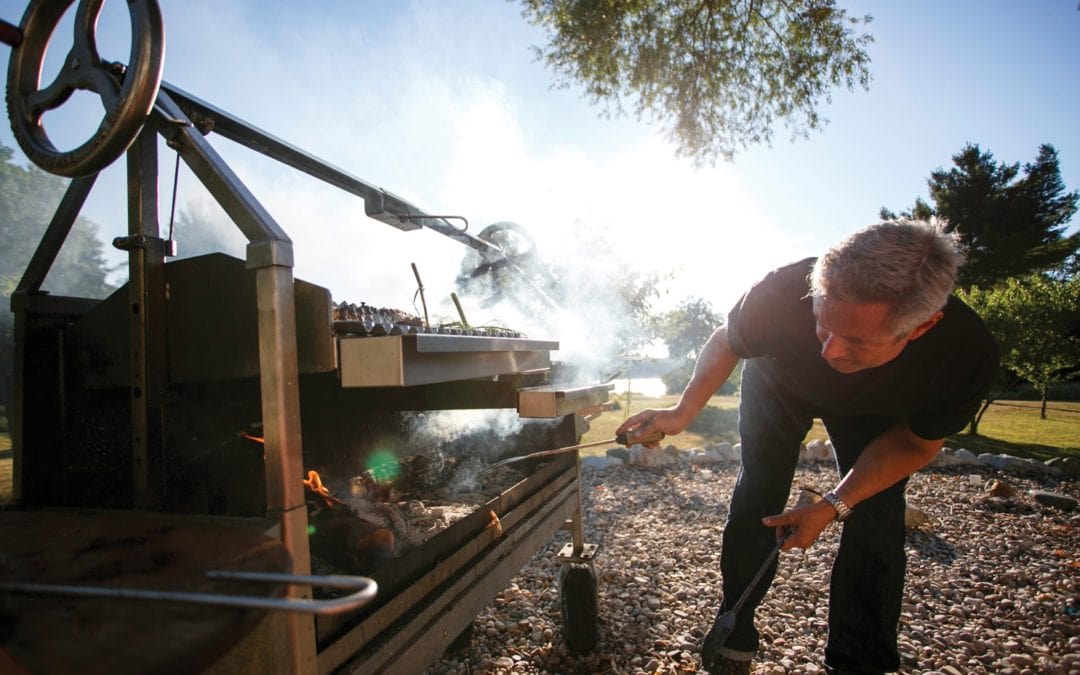 The idea began in a flat in Argentina, but it became real on the shores of Charlevoix. This is the story behind one of America’s great grill companies, Grillworks. (The grill masters were also kind enough to share three of their favorite recipes. See below.)

Featured in the July 2017 issue of Traverse, Northern Michigan’s Magazine. Get your copy.

Golden July light stretches the warped silhouette of an ancient walnut tree into shadows on the lawn at the Eisendrath family’s centennial farmhouse above the South Arm of Lake Charlevoix. A red printed tablecloth lands softly on a sun-bleached wooden picnic table. Bourbon, bitters and sour cherries splash into mismatched tumblers. In the kitchen, resident chef and mother Julia Eisendrath mandolins zucchini into translucent ribbons. Her son Ben slathers soy sauce and Dijon mustard over a rack of baby back ribs before turning to a freshly caught lake trout to be butterflied over fresh dill fronds while salt and lemon work their magic on the sweet orange flesh. Charles, Grillworks founder and family patriarch, pops corks and passes cocktails to guests as they arrive for dinner. 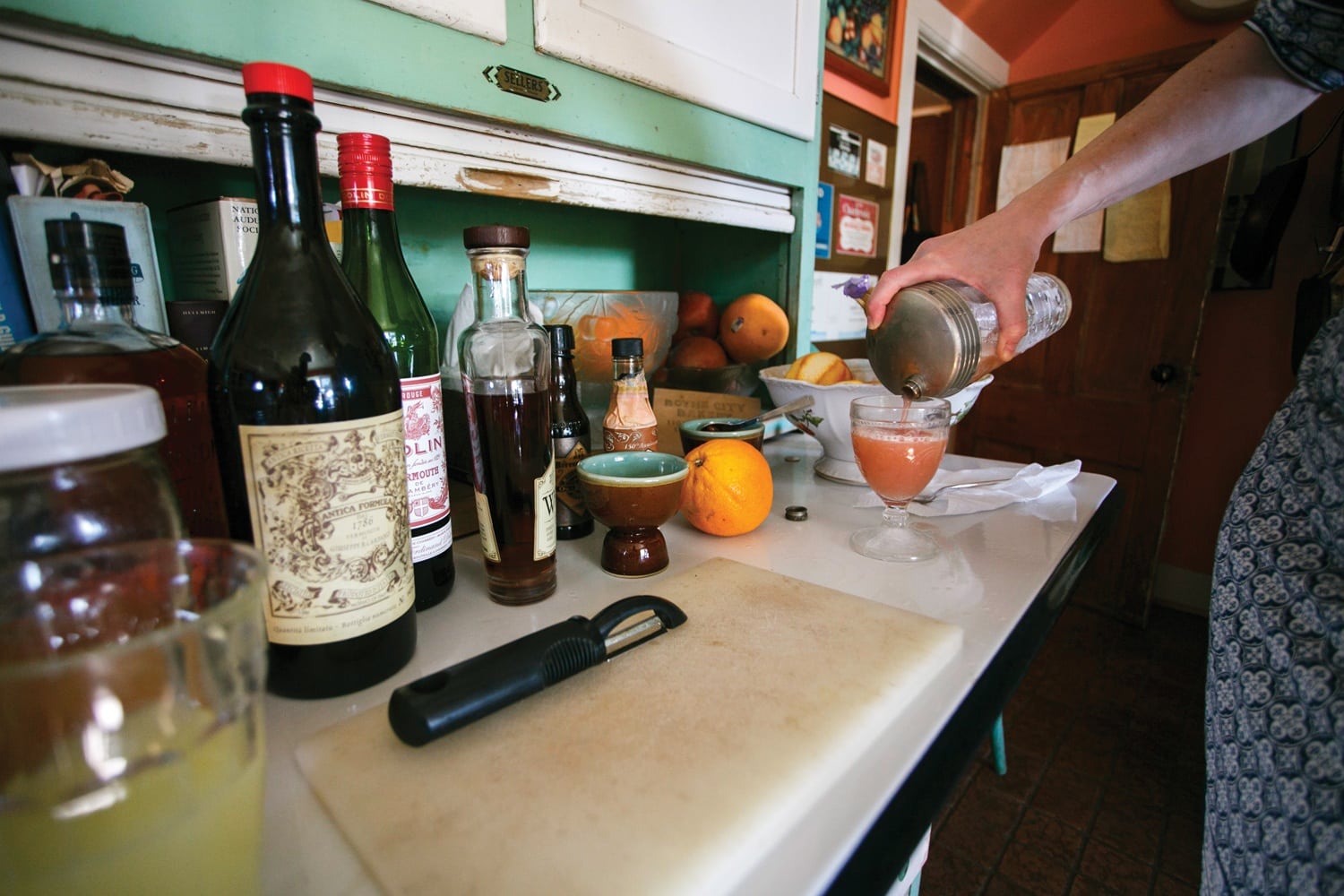 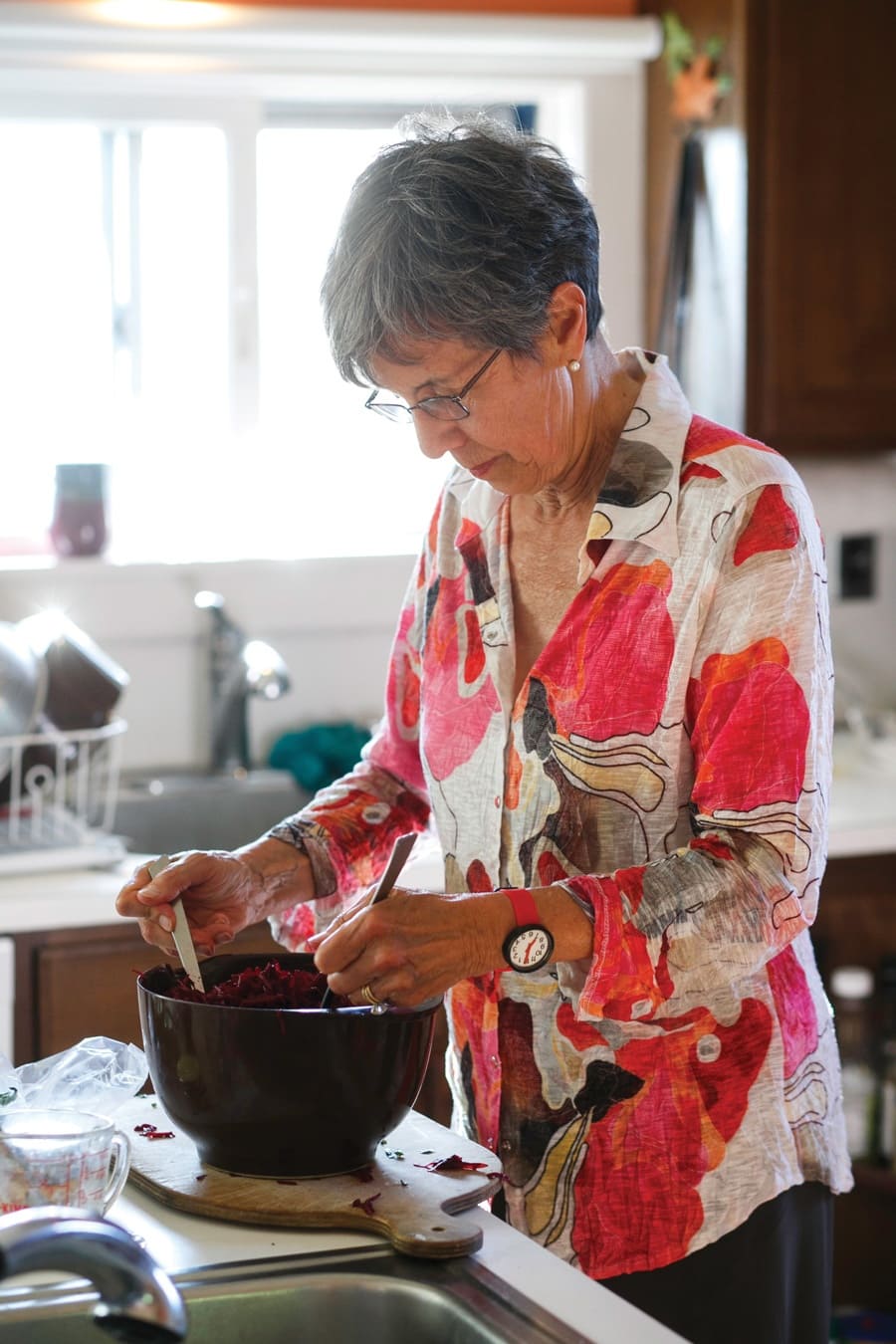 Sending curls of flame and wood smoke into the cloudless summer sky from its station on the edge of a stone patio is the Grillworks Dual 42 CRE. The grill is an artful assembly of stainless steel and die-cast aluminum that is the engine for this al fresco summer feast and the nexus of a story about family, fire and entrepreneurship that began 40 years ago in Buenos Aires and unfolds today in Northern Michigan.

“In the 1960s and ’70s my dad worked as a foreign correspondent for Time magazine,” Ben Eisendrath says, feeding a growing grill fire with footlong staves of apple wood, “I was born in London and my brother in Paris, where my parents fell in love with food, particularly rustic French country cuisine.” 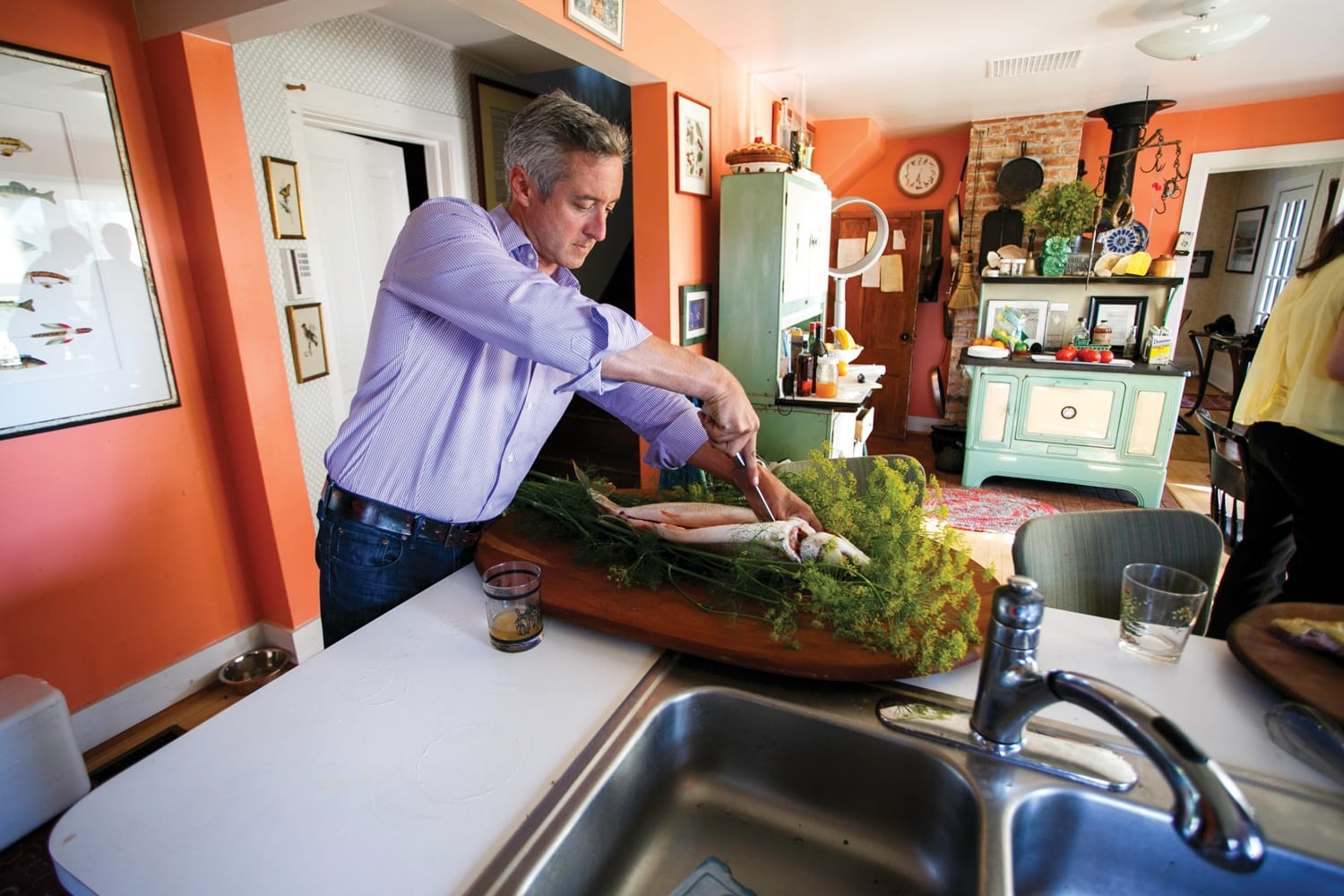 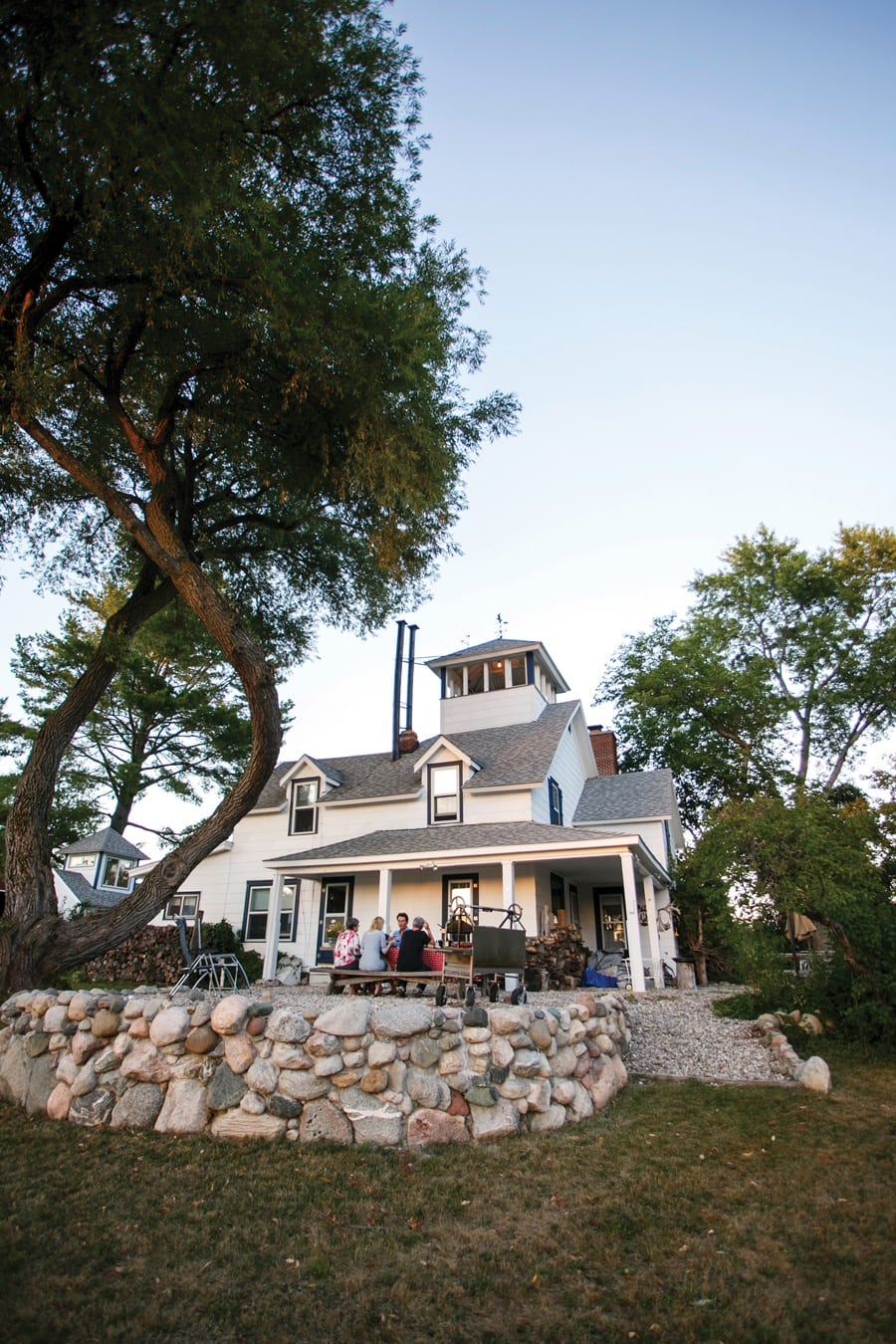 Time sent Charles on a scouting mission to Buenos Aires where, at the flat of the magazine’s local bureau chief, a revelatory taste of wood-grilled beef set Grillworks in motion. The flavor “blew me away,” Charles recalls. “I thought, My God, this is the way to do things.” Stashing a giant grass-fed beef fillet in his suitcase to sell Julia on the idea of Argentina, Charles flew home to France and shortly thereafter relocated his young family to Buenos Aires, where he found himself in the role of war correspondent covering the mayhem in Chile that broke out after a 1973 coup d’état that gave rise to the brutal junta of Augusto Pinochet.

“While Dad was covering the war, we discovered Argentina’s Sunday ritual of asada,” Ben remembers. “Their style of grilling over open coals on a height-adjustable v-channeled surface is an all-day family activity. Everyone eats, everyone gives advice on when to stoke the fire and when to turn the meat.” 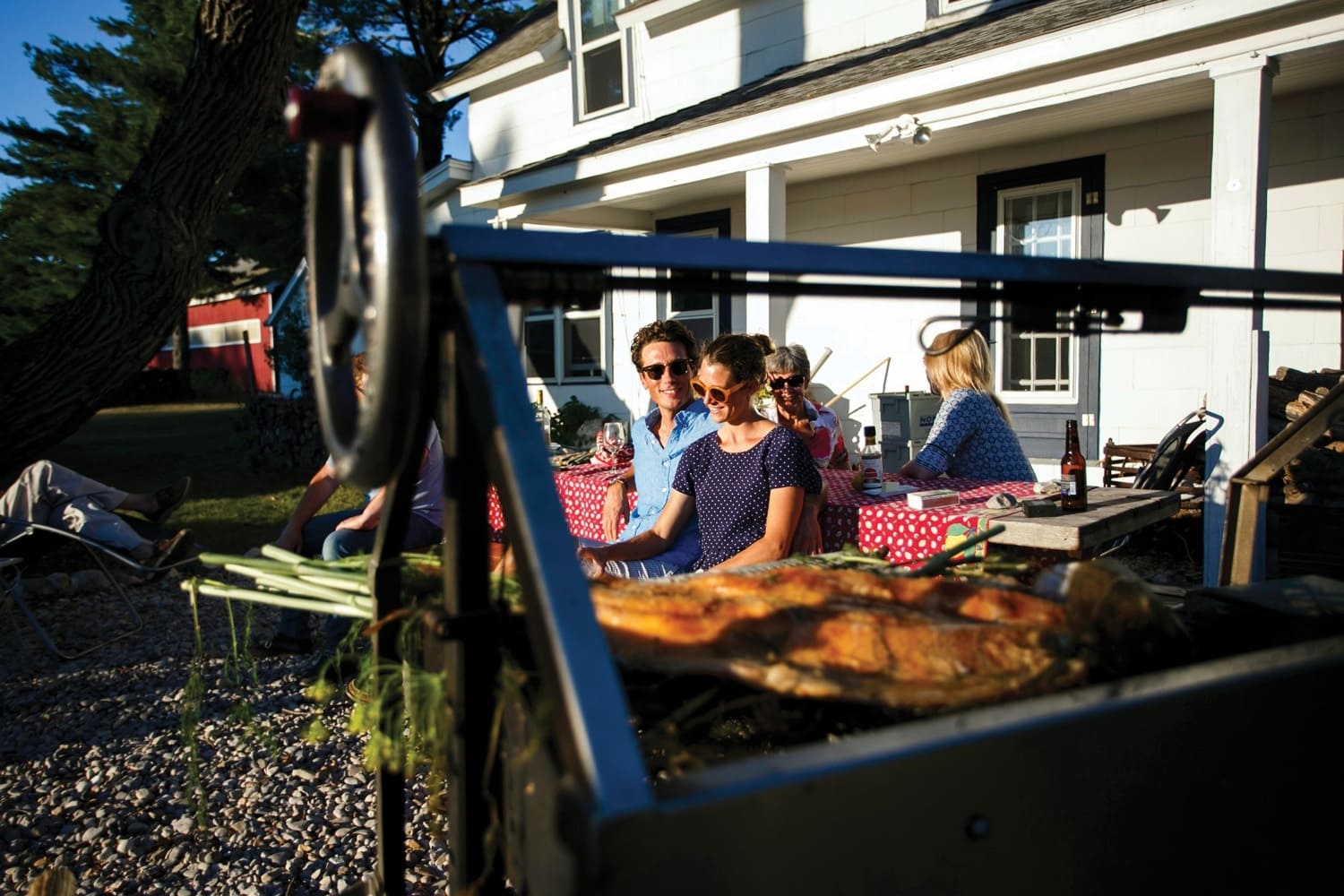 With the romance and ritual of asada seared into the family consciousness, the Eisendraths moved to Ann Arbor—a live-fire grill in tow—where Charles taught journalism at the University of Michigan. Though the tradition of live-fire cooking was kept alive at Charles’ suburban backyard barbecues, the Argentinian grill the family had brought back was shoddy and seemed unworthy of the ritual. “They were junk,” he says of the grills.

During summers off, Charles conscripted a local metal shop to help him build a stainless steel grill prototype that would do justice to his revered asada. “He went through about 14 prototypes and all sorts of small-scale disasters before there was a presentable machine,” Ben says. He laughs at the memory and lays a mustard-slathered rack of ribs on the hot grill. When the grill was ready: “Suddenly his friends all wanted one.” 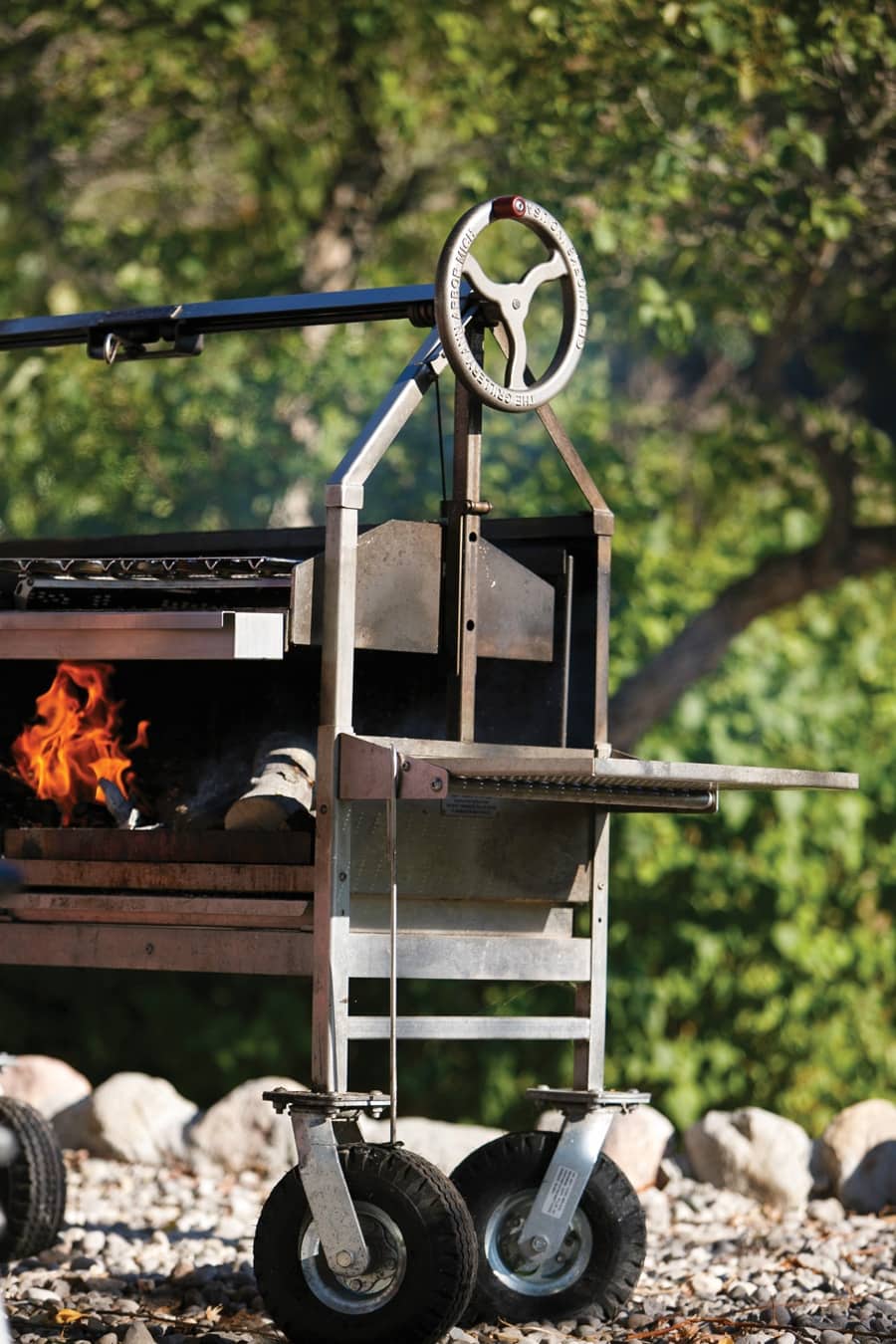 But the birth of Grillworks as a commercial enterprise was launched from the pen of iconic New York Times food writer James Beard, to whom Charles had sent a note trumpeting his invention and imploring Beard to try it out. “We didn’t hear anything and figured that was that,” Charles says. One day, some months later, Charles was working on his Charlevoix farm, when the phone rang and a voice announced, “This is James Beard.”

Soon after, Charles and Julia were en route to New York with boxes housing the dismantled grill. With the grill reassembled in Beard’s backyard the writer showed interest but didn’t so much as light a fire. Figuring the show was over, Charles and Julia made preparations to leave. “We pulled out our wrenches to take it apart and he said, ‘What are you doing? I want this to stay here.’” Shortly thereafter, Beard wrote up Charles’s invention in The New York Times, calling it “brilliantly thought-out and well constructed.” Within days of publication an overstuffed box of letters showed up on the Eisendrath’s step with notes saying things like, “If Beard says it’s good, it’s good. Here’s my check.” 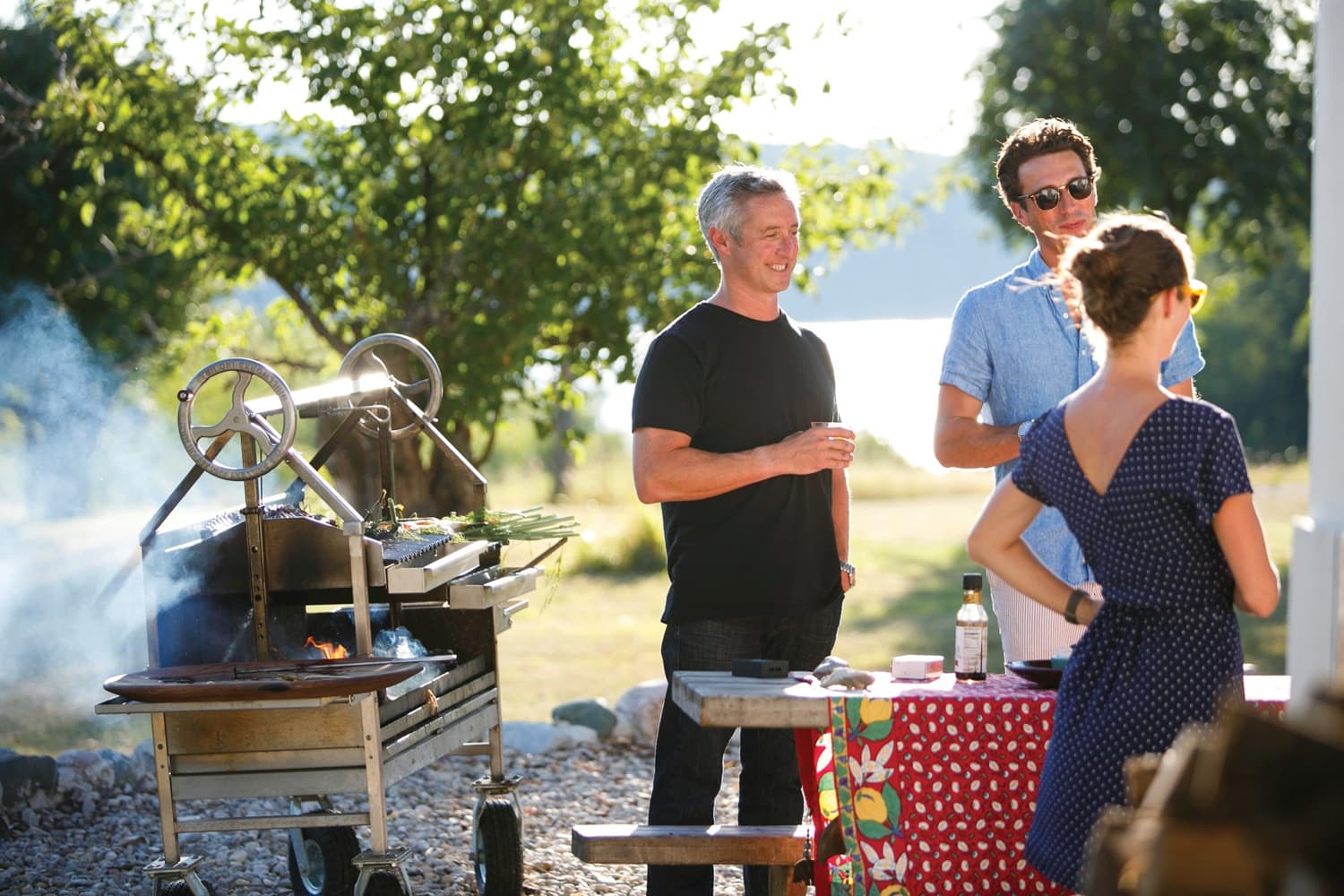 What began as Charles’s kitchen table enterprise is now the standard for live-fire cooking platforms and a requisite piece of kit at top eateries around the planet. Chefs in London and Seoul cook with them. The grills are found in the icons of regional American cuisine, like Sean Brock’s Husk, in Charleston, South Carolina, or Dan Barber’s Blue Hill at Stone Barns, in New York, recently named restaurant of the year by the website Eater. “Grillworks was going on for basically my whole childhood,” says Ben, sipping his cherry bourbon fizz and stoking the flames. “Chefs and amateur enthusiasts would call our house, and Mom would process orders and coordinate shipping. I earned my allowance stamping serial numbers into the new grills.” 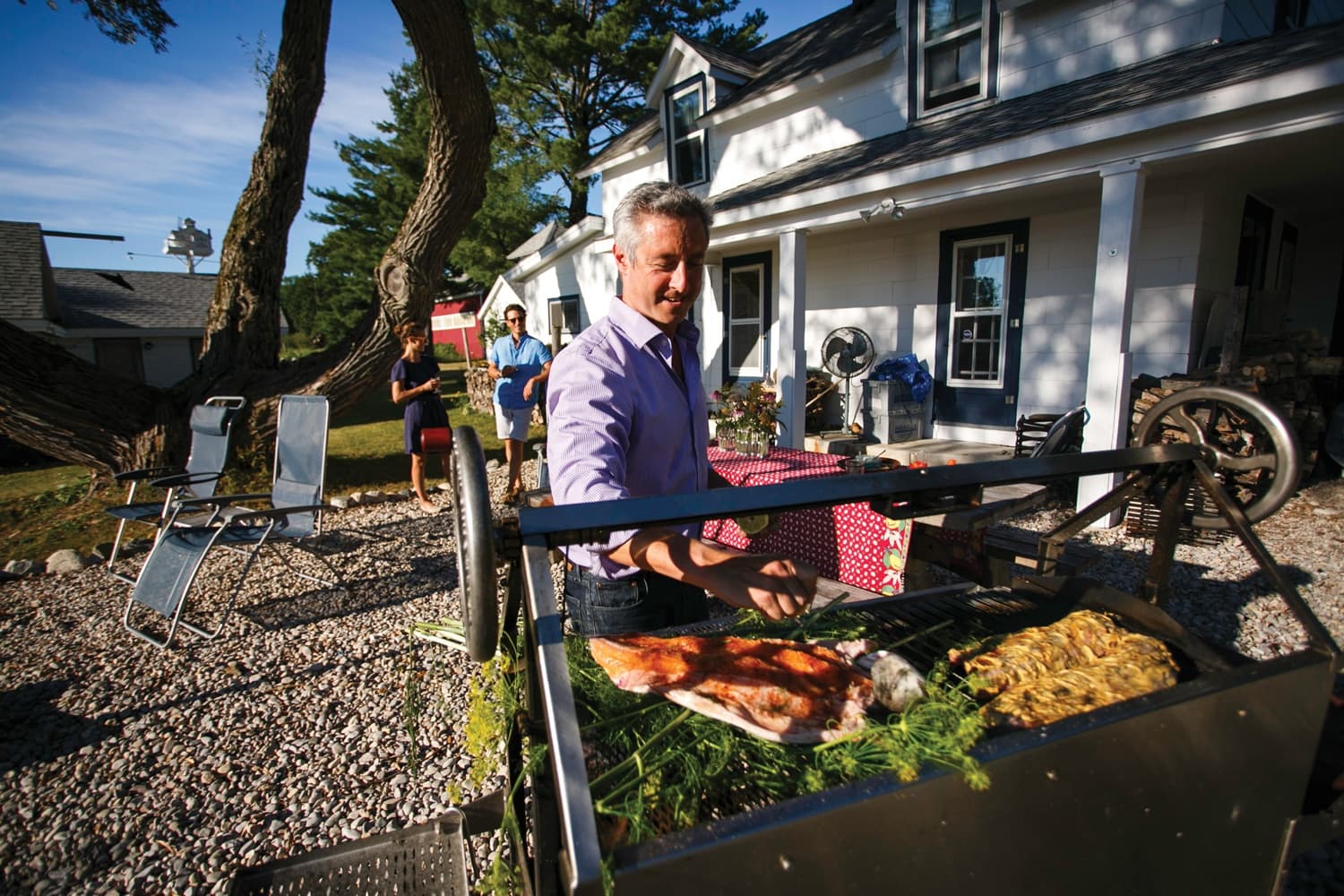 By the early 2000s, though, the family business had gone dormant, and Ben, coming off a successful career in the Washington, D.C., dot-com scene, decided to blow the fire back to life.  “Dad and I were fishing in Argentina, trying to figure out what I should do with my life. We met an heir to the Char-Broil family, and Dad began making a pitch to sell him the plans and the company. I literally jumped in between them and said, ‘No. Stop. I want to do it.’”

From dusty boxes containing his father’s original blueprints and his mother’s meticulously kept handwritten records, Ben spent the next several years redesigning for a new line of prototypes, building a web and social media platform to launch the business, and contracting a custom welding shop near Traverse City to build the grills. Crafted from precision-machined stainless steel, die-cast aluminum crank wheels and resilient firebrick, Ben’s live-fire machinations represent hours of skilled welding and emerge as works of functional culinary art built to last lifetimes. “We believe that a grill should be a beautiful thing, a center of attention,” Ben says. He shows how the unit’s two cooking platforms can be independently adjusted over the flames, in an open-plan restaurant or on a patio, the grill becomes a stage, mesmerizing people with fire and then letting them experience its flavor. 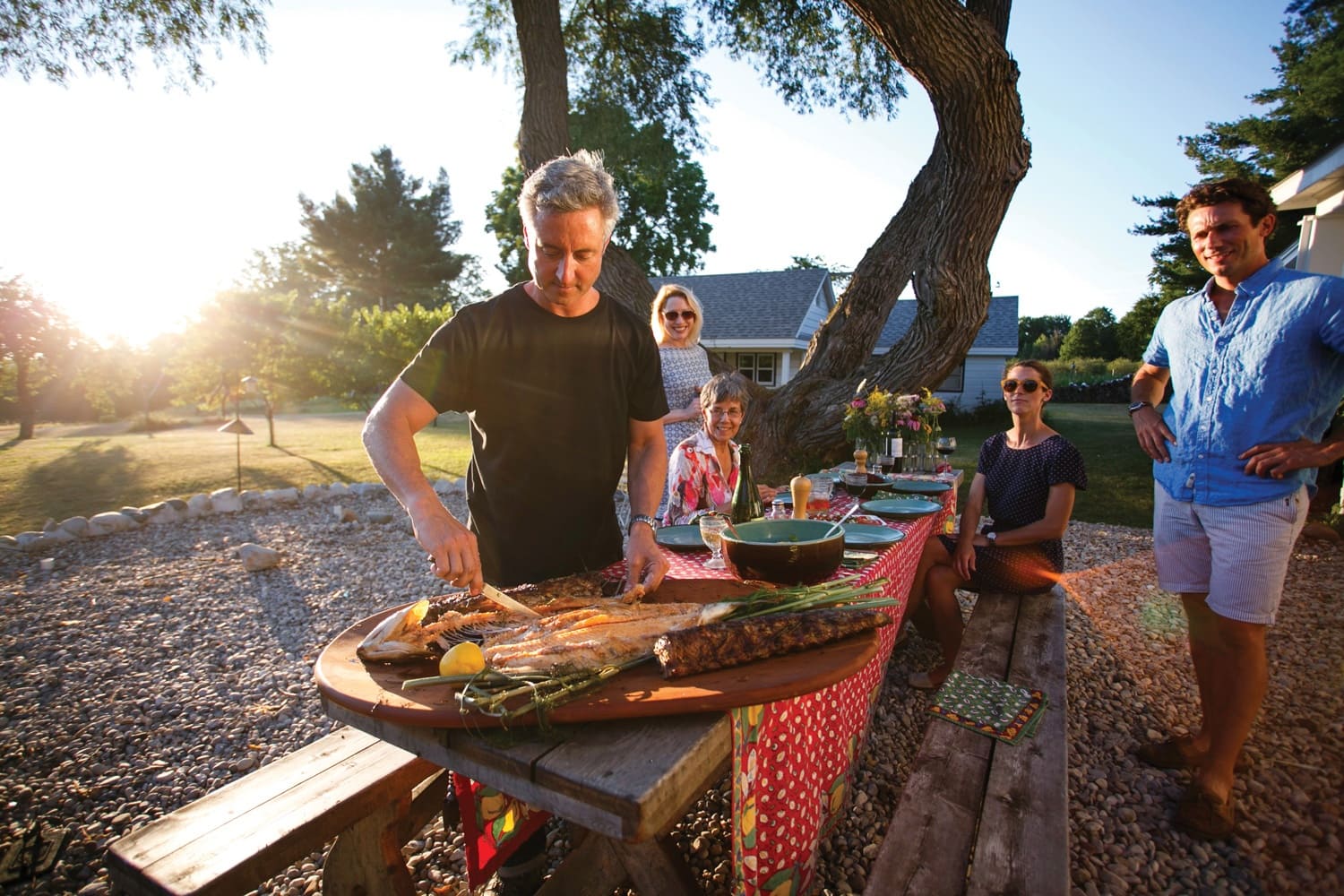 While Ben concedes that showcasing his designs at international food and wine festivals and keeping company with luminaries of the cooking world is not the worst way to make a living, it’s his own fascination and elemental attraction to live fire that really drives him.

“I’m a pyromaniac who teams up with chefs,” he says. He turns a crank wheel to lower a glistening whole lake trout nested in fresh dill fronds closer to the flames. “I teach them how to handle and run a fire effectively.” 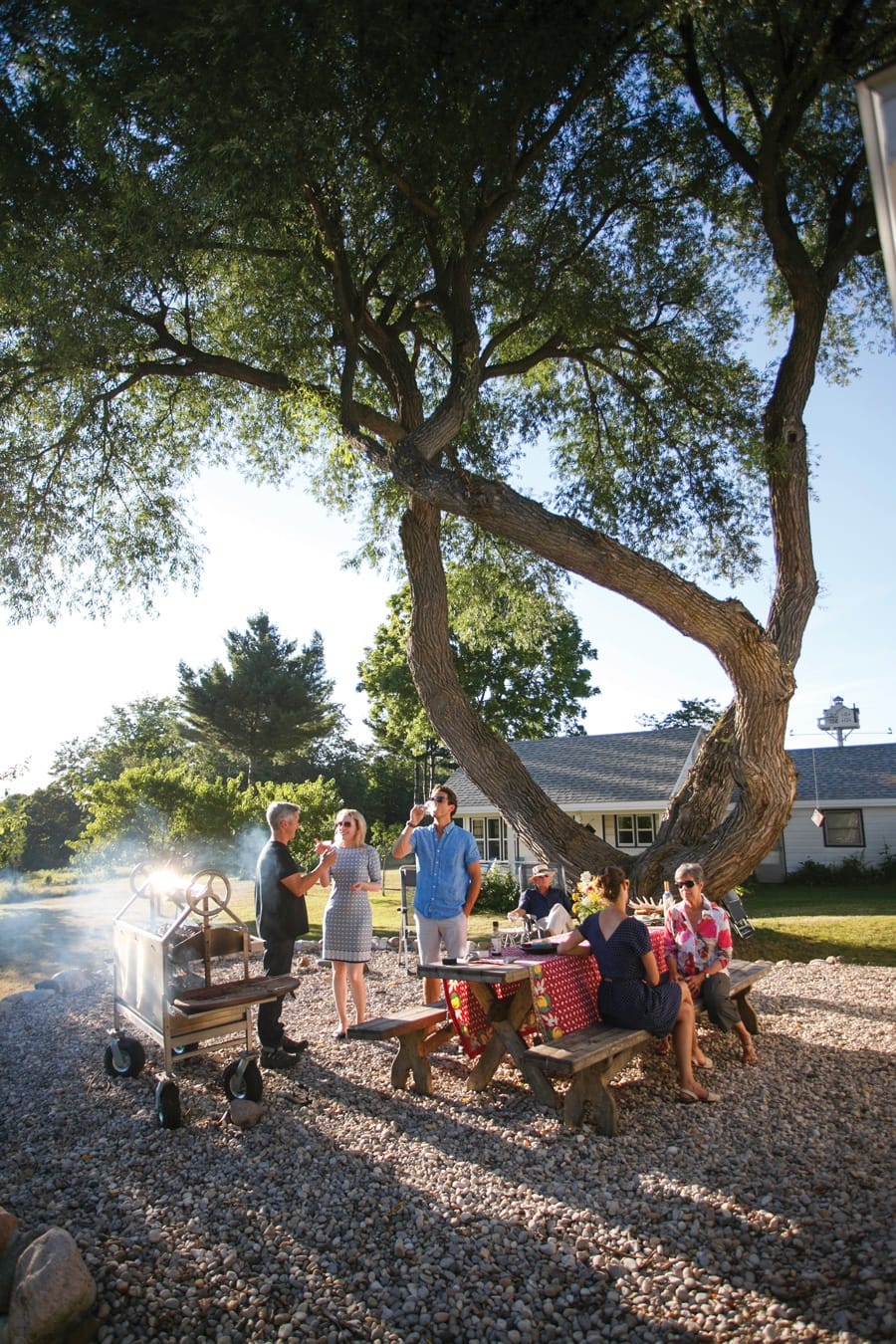 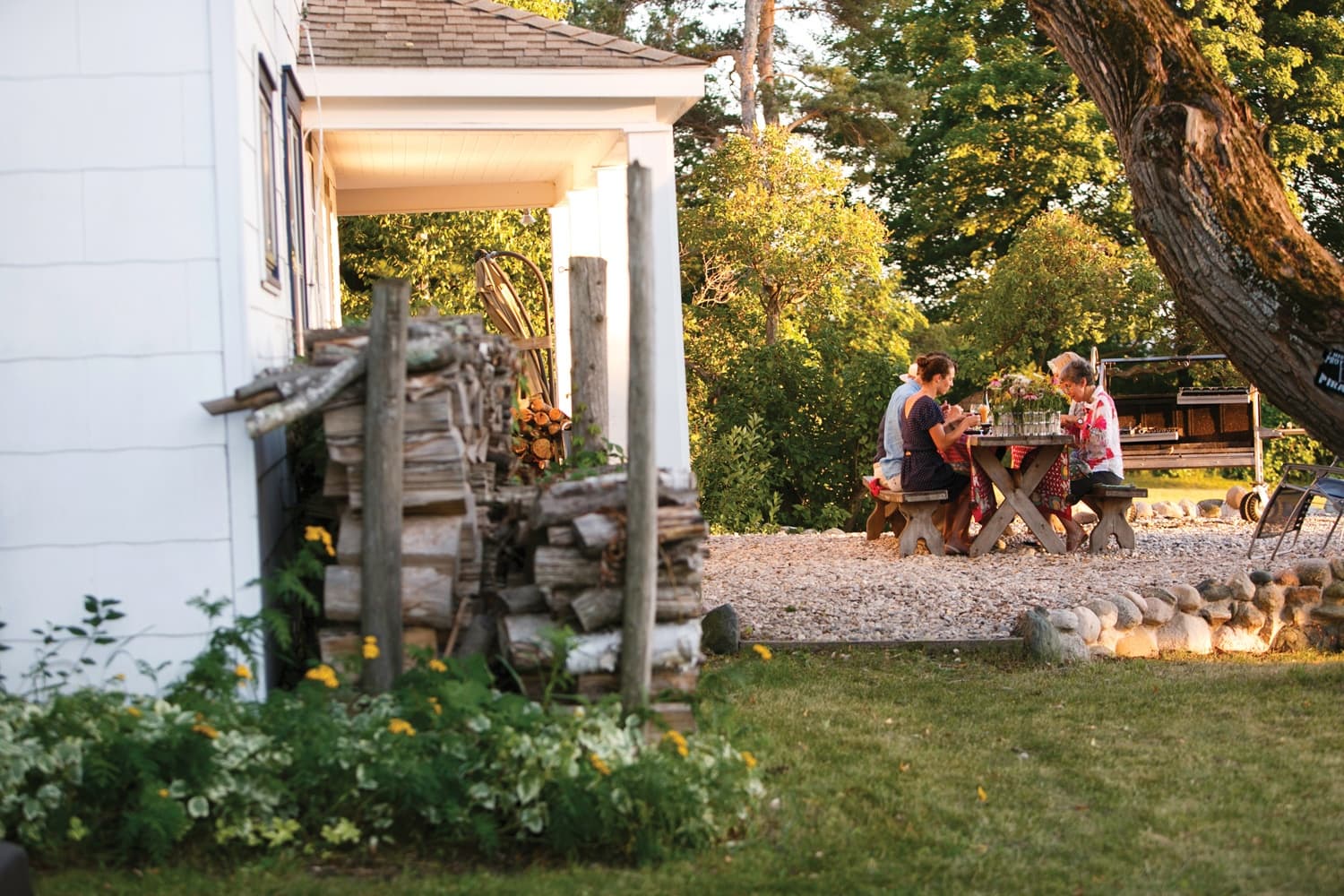 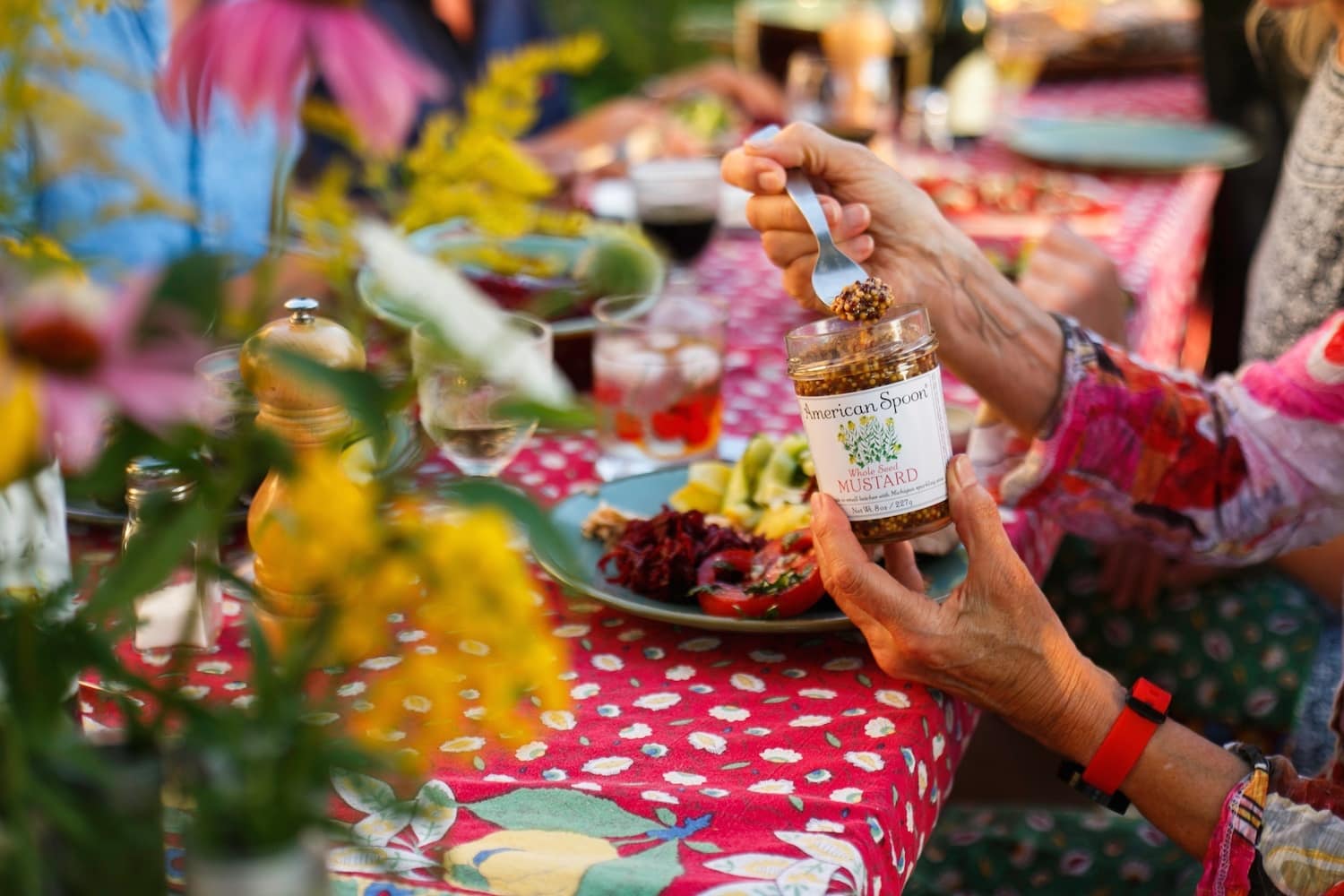 A deftness is clearly at work in the myriad and constant adjustments Ben makes to the grill as the meats progress through their arc of cooking. His is an engaged, kinetic approach to outdoor cuisine that is a long way from closing the lid of an offset smoker and wandering off for hours at a time. “Watching the food and flames is the fun part of all this,” Ben explains. He tells people that wood-fire grilling is to barbecue as cooking is to baking. “With baking and barbecue you prep your ingredients, close the hatch and hope for the best. This is active. This is constantly moving coals and fuel around to optimize exposure to the food.”

That optimal exposure, and the layers of flavor and caramelization that come with it, relies on the right wood, as stated in the Grillworks mantra “natural foods deserve natural fuels.” This most definitely does not mean compressed briquettes doused in lighter fluid. “The volatile compounds released when wood burns down to smoke is where the flavor comes from,” Ben says. He illustrates, slicing off a succulent piece of pork rib to check for doneness. Perfect grill wood is 8 percent to 12 percent moisture, and that moisture being turned to steam imparts a distinct flavor to the food.

Regulating heat and burn rate is crucial when cooking over live flames, and for this reason Ben stresses a standard uniformity in the size of the cooking fuel. “Eleven-by-two-inch pieces are perfect for creating a fire that burns down to cooking heat in 15 or 20 minutes,” Ben says. He gestures to a pile of cut apple branches pruned from the family’s orchard. Also essential is choosing wood to match the meat you’re cooking. Apple or black cherry produce a mild smoke that’s perfect for poultry or fish, while pork and beef can take up the flavor of stronger woods like oak and hickory. 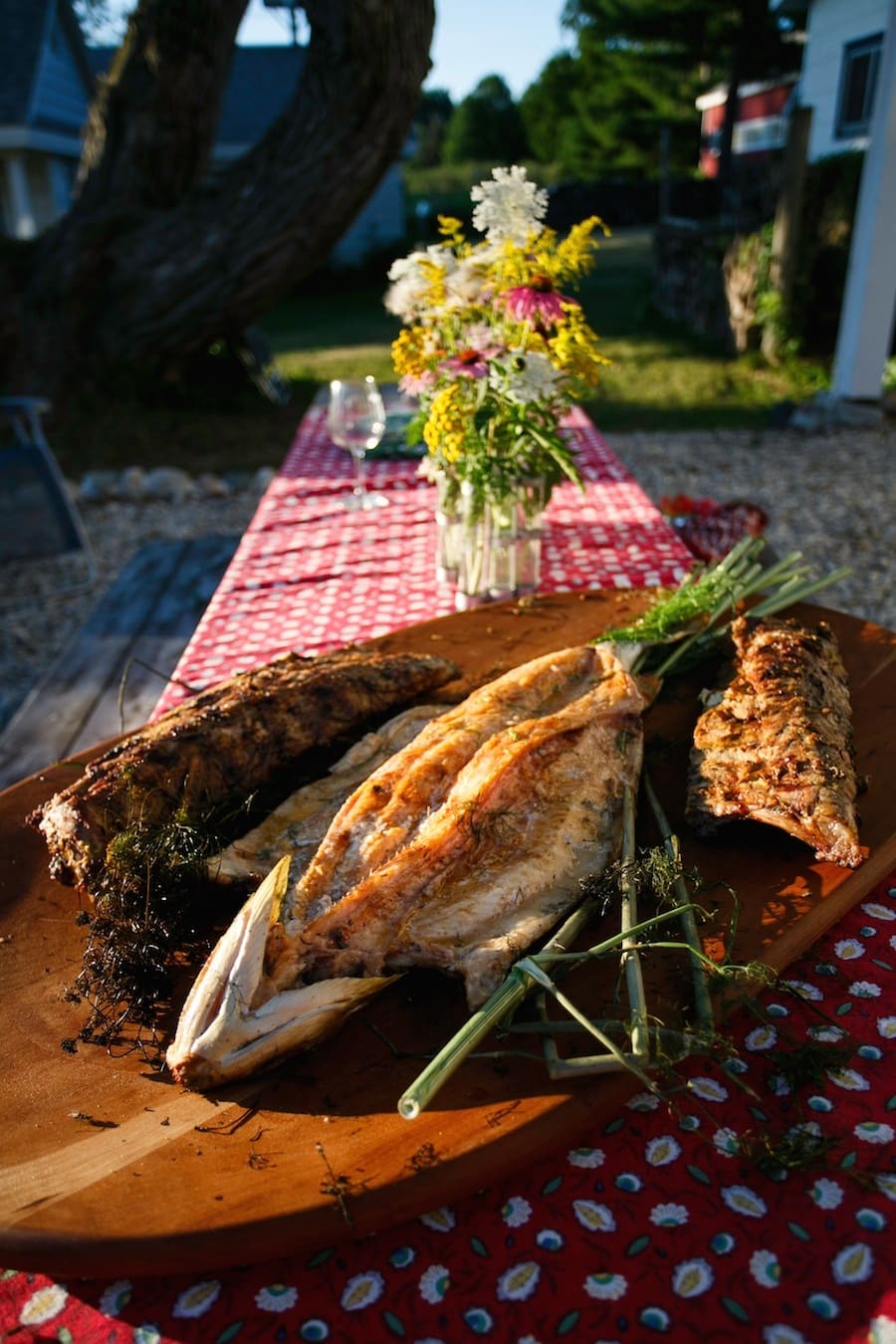 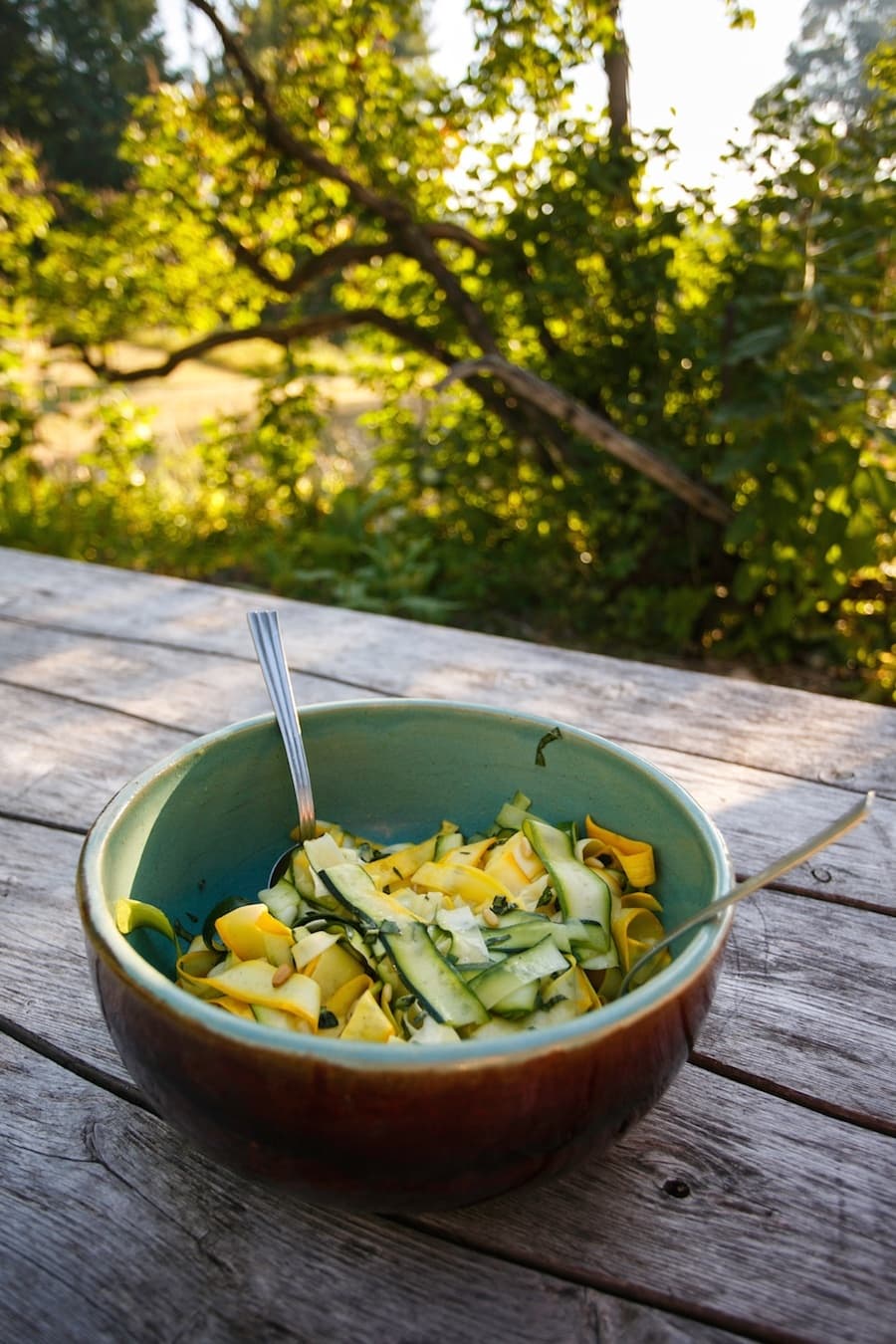 The grill’s design, along with its carnivorous Argentine origins, lends itself to making meat the main event, but Ben points out that fresh produce has its place in the flames as well. Here at the lake house, the Eisendraths grill sweet corn, big mushrooms and zucchini. Grilling and caramelizing fruit like ruby red grapefruit or ripe peaches can make a delicious foil to meat. “For dessert we’ll grill bananas over the wood coals until they go black then peel them and spoon them over ice cream,” Ben says. 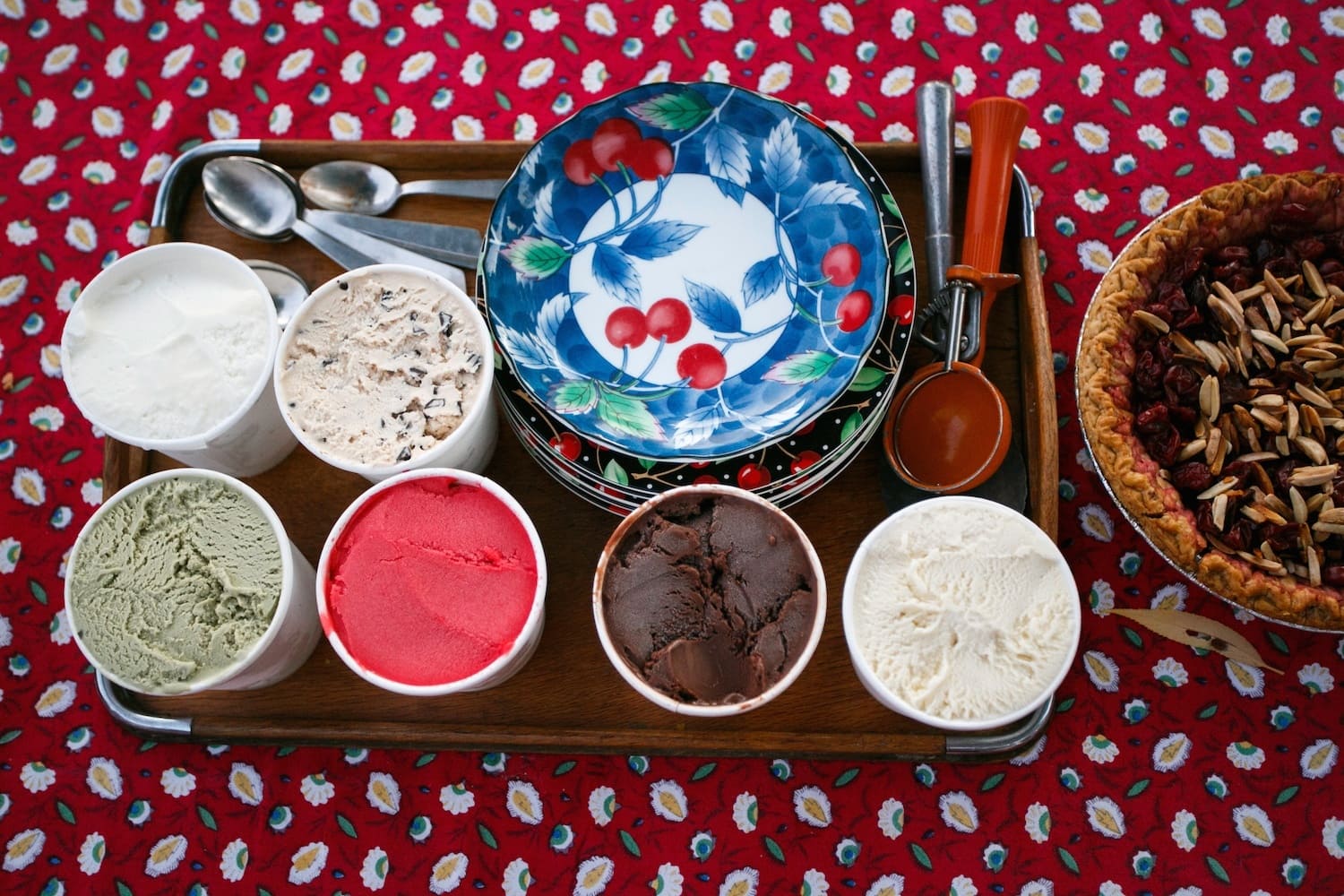 When asked about the most revelatory morsel pulled from a Grillworks fire, Ben answers, surprisingly, with avocado. “Chef Louis Goral at Rural Society, in Washington, D.C., spent months developing the technique. It was cooked skin down, seasoned with meat drippings from the grill, then seared at the end. Damn, it was good.”

For all the fire mechanics and culinary savoir faire built into meals created on Grillworks surfaces in Michelin-starred restaurants or on backyard patios, it is unquestionably the context and company, the shared sensuality of salt and smoke and smell, that makes fire-cooked food a unique pleasure. It is Ben’s father, Charles, pouring inky glasses of Uruguayan tannat and telling the story of catching the lake trout this morning on the edge of a deepwater shelf in Lake Michigan. It is his mother, Julia, landing bowls of bright purple beet salad and fresh tomatoes dressed in olive oil and torn basil on a table set for eight while the sun blazes along the tree line on this halcyon July evening. “It’s really just playing with fire,” says, Ben, poking the coals a final time before sitting down to eat.

3 Grillworks Recipes to Try This Summer: 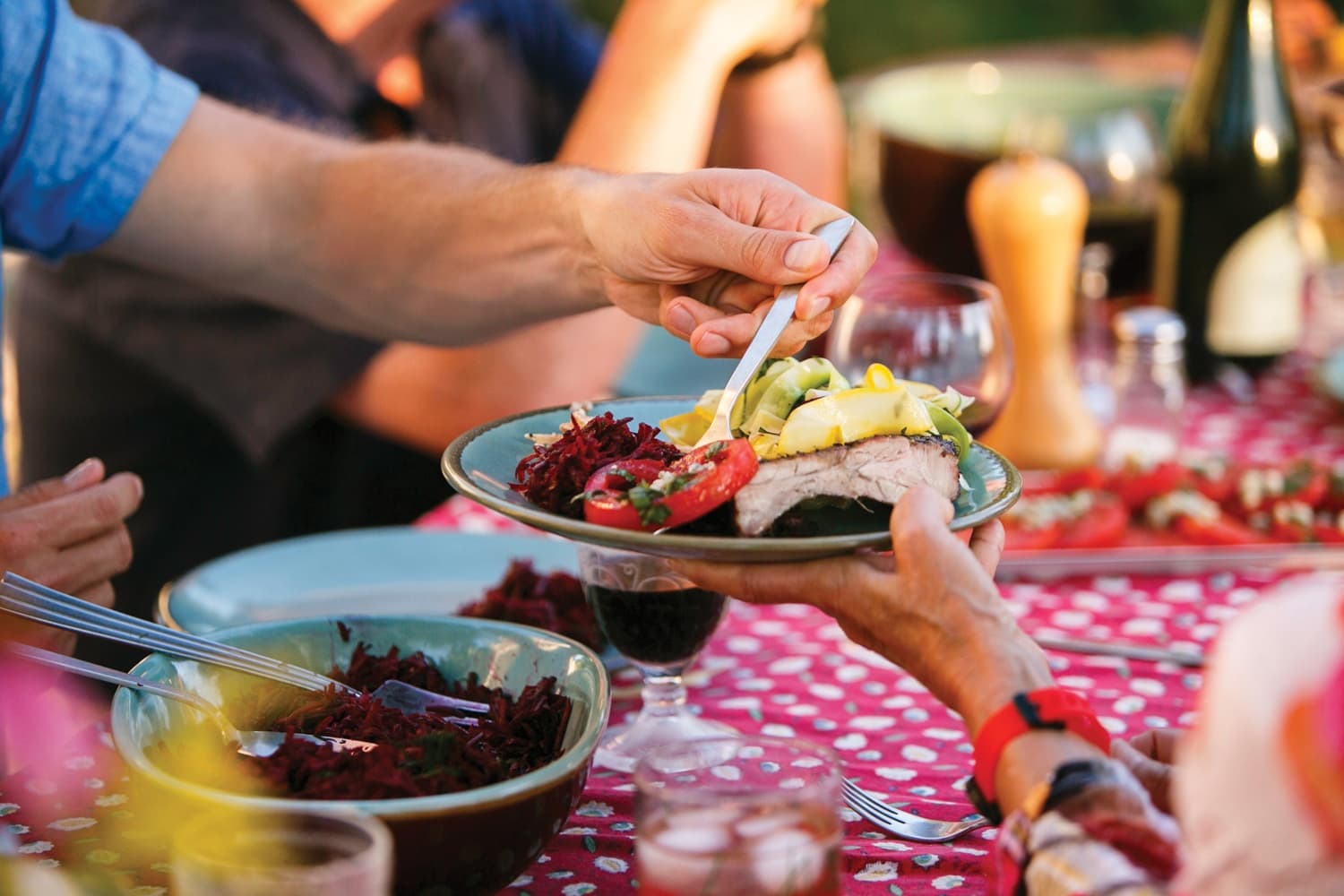 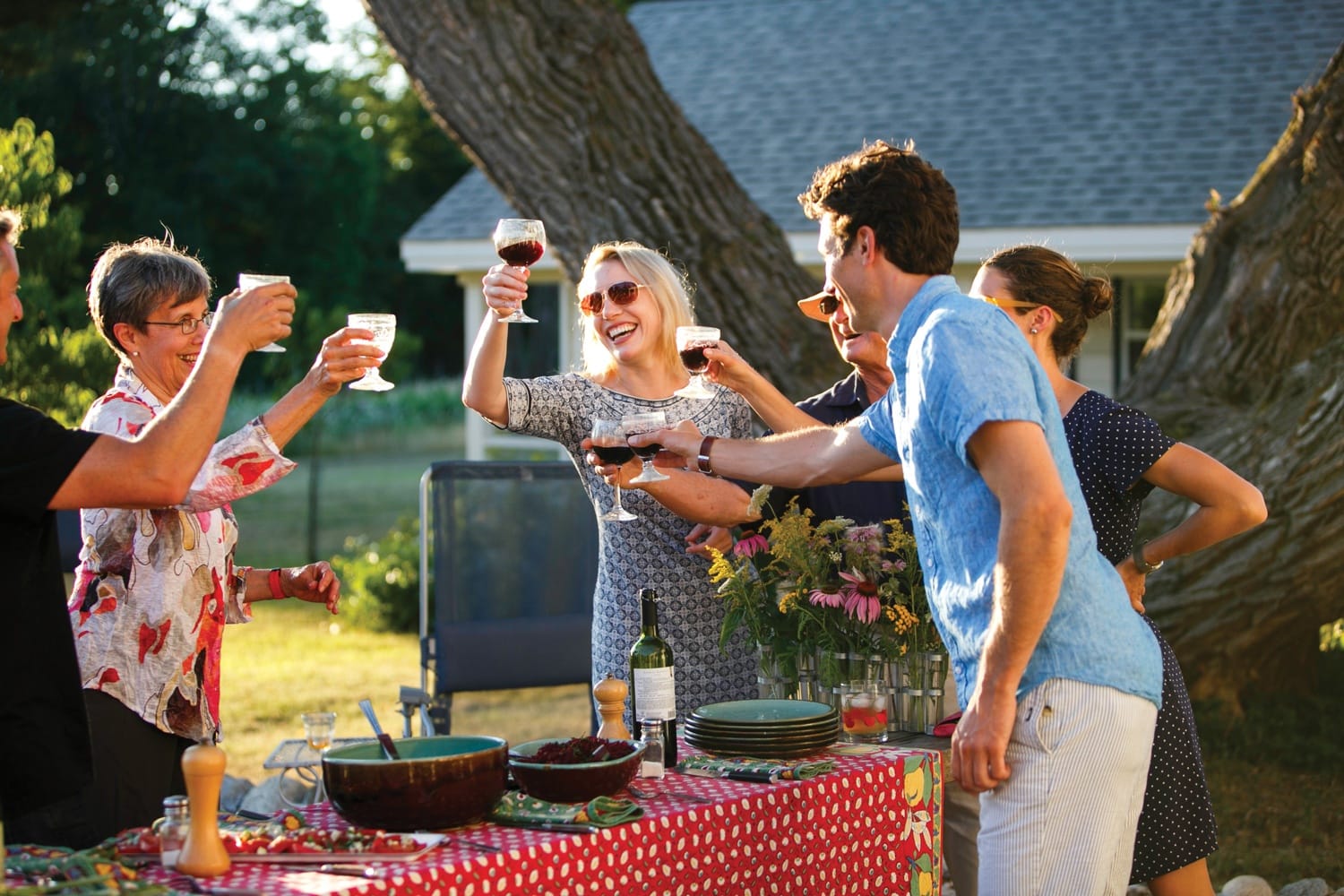 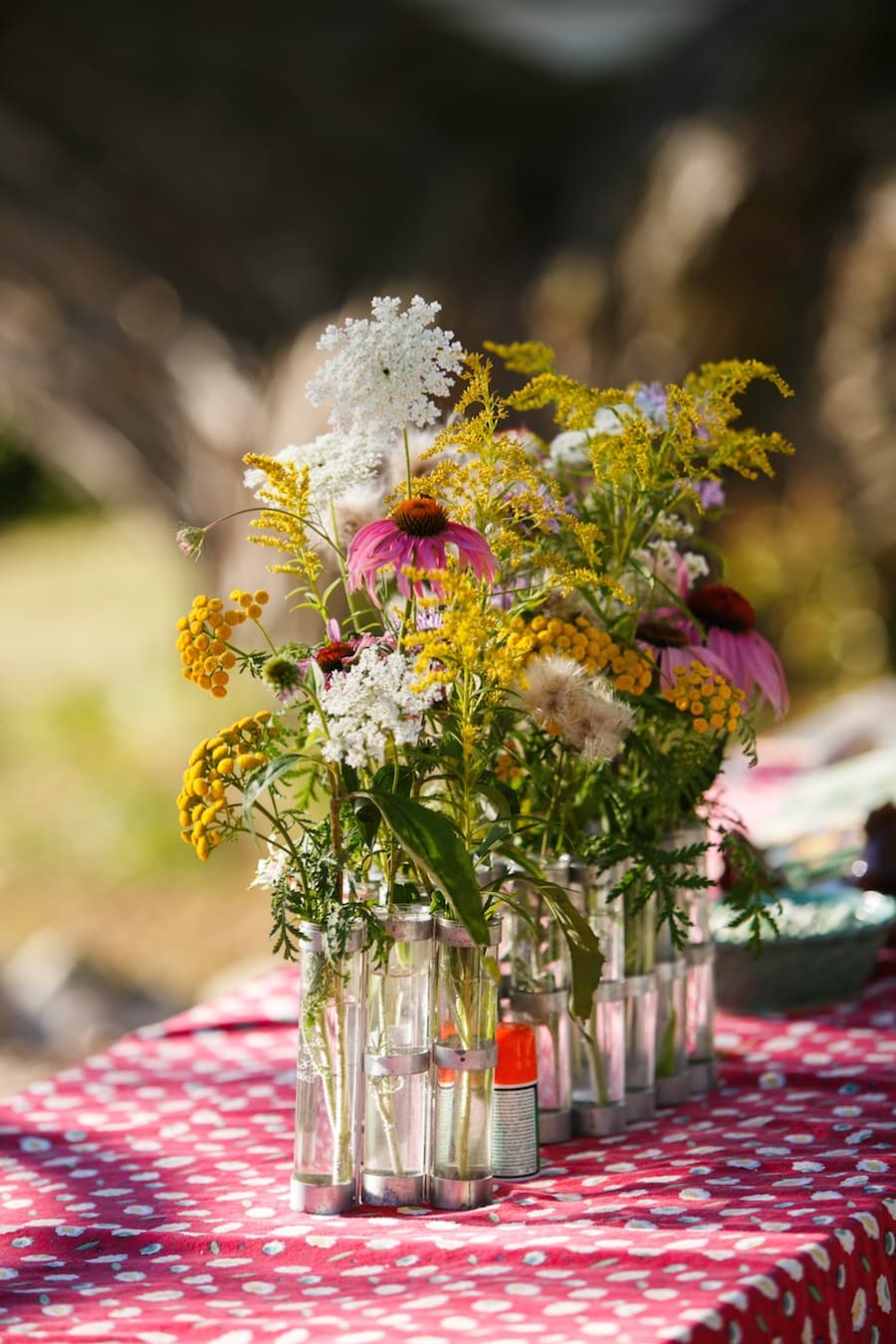 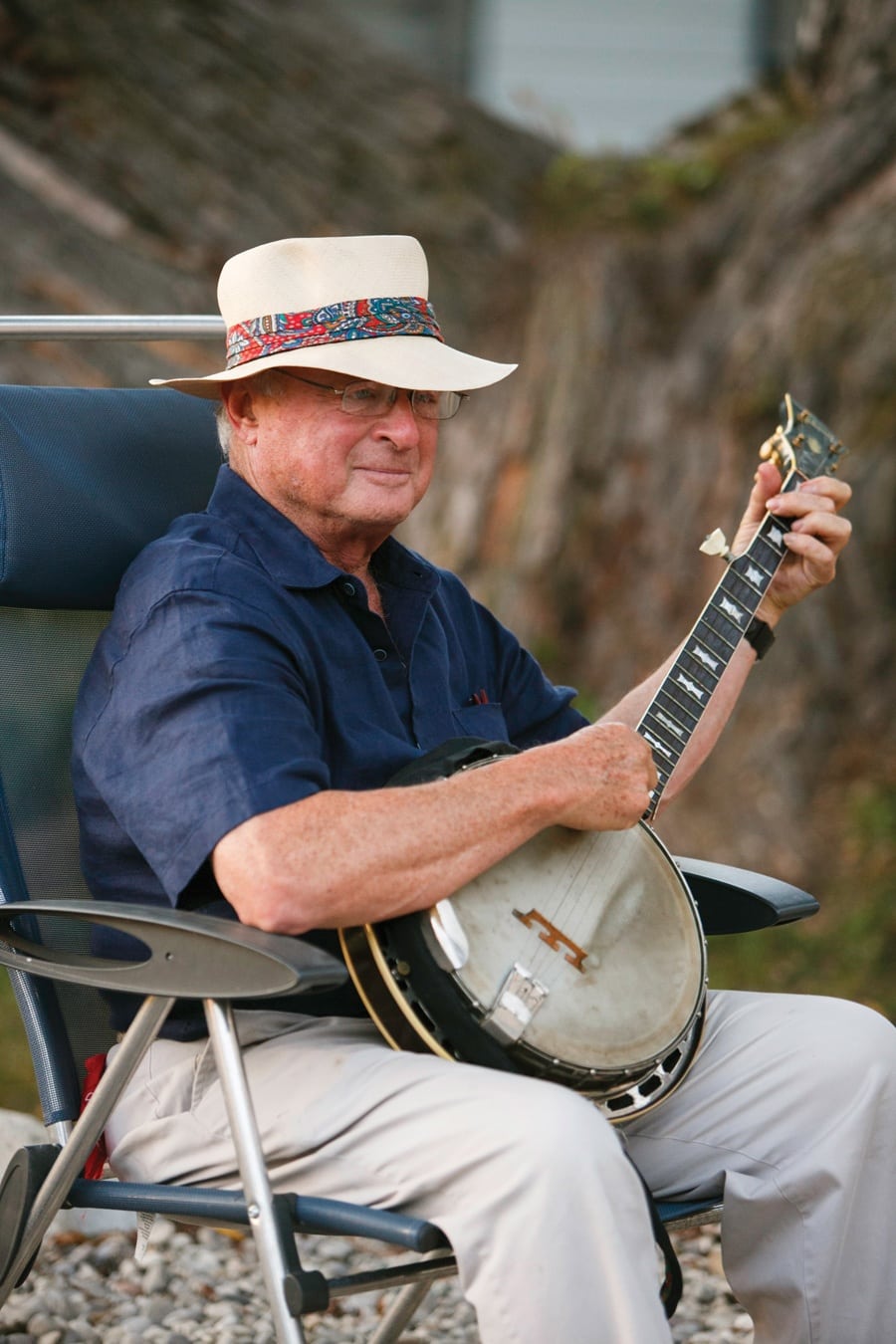