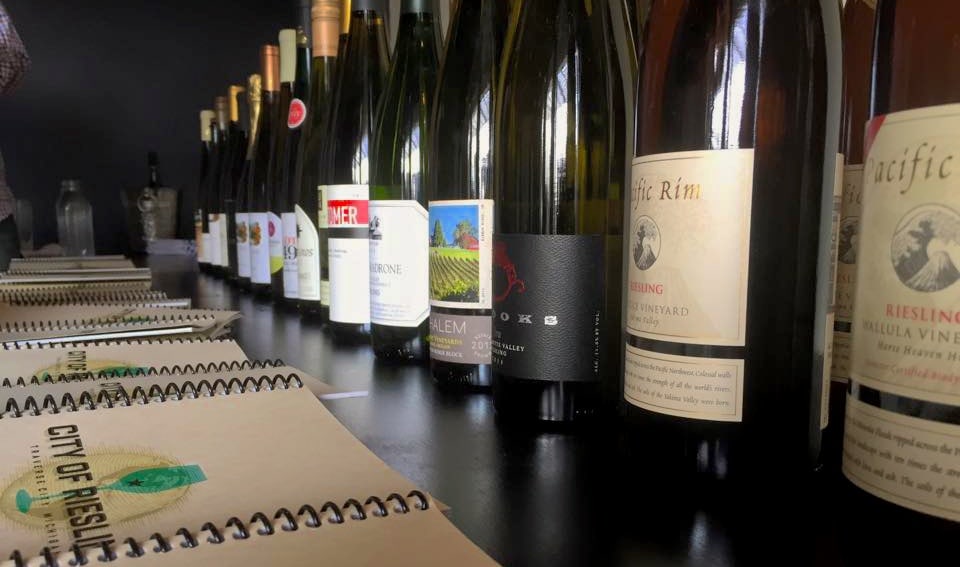 “Think globally and act locally.” While often heard in conjunction with city planning, the environment and fields such as education and business, the phrase is also appropriate for use with City of Riesling. The two-day wine event in Traverse City celebrating the riesling grape will bring in wine experts and aficionados from across the globe.

Amanda Danielson, one of the co-founders of the event, compares it to the Traverse City Film Festival and Great Lakes Equestrian Festival/Horse Shows By the Bay in showcasing the region to an audience from across the world who may not have even heard of the its charms. “It’s huge for the area,” Amanda says, noting the event is now in its third year.

Amanda is an Advanced Sommelier and co-owner of both the reborn Blue Goat Wine & Provisions and Off the Map Hospitality (restaurants Trattoria Stella and the Franklin, as well as catering and special events). For City of Riesling, she teamed up with Sean O’Keefe, scion of the Chateau Grand Traverse wine family and winemaker at Mari Vineyards.

While the region is justifiably proud of its wine heritage and wine-making, this event goes far beyond. Among the guests will be three from Germany: Joachim Heger from Baden, Clemens Busch from Mosel and Franzi Schmitt from Koehler-Ruprecht. Andrew Hedley of Framingham Wines is coming from New Zealand. Winemakers from Oregon and California will be complemented by their counterparts from Ontario and the Finger Lakes area of New York. And local wineries and winemakers will also be on hand. “It draws from the entire world,” Amanda says.

The event kicks off with Lunch By the Bay/The World on Our Coast, taking place at Clinch Park from noon to 2 p.m. on Sunday. Attendees will have the opportunity to dine along the Grand Traverse Bay while seated with an owner and/or winemaker from both a local winery and one from another region, followed by an opportunity to taste several rieslings from this area. That’s followed by a pinot noir/riesling tasting at Hotel Indigo, beginning at 4 p.m. The signature event, Night of 100 Rieslings, takes place this year at the lot on the corner of Front and Pine Streets beginning at 6:30 p.m., and will feature music by Laith Al-Saadi.

Monday will focus on educational seminars, but don’t be fooled into thinking these are just some stuffy classroom lectures: these lively discussions will also feature wine tastings as well. Salon Riesling this year is emphasizing cutting-edge producers from the relatively warmer growing climates of California and Australia, some of whose wines are new to the area and even to the U.S.

This will also be an opportunity to hear from three major wine writers: John Winthrop Haeger, who has written two books which Sean O’Keefe considers among the best currently in print on pinot Nnoir and riesling production; Mike Bennie from Australia, considered one of most interesting wine writers working today; and co-founder Stuart Pigott. Pigott calls riesling “the white wine of our time,” and has been a key person in introducing rieslings from this area to an international audience.

Even after the event concludes it’s not over. The City of Riesling and the International Riesling Foundation have commissioned a special riesling-themed tasting booklet that will tout the grape and its wines. The booklet will be available in various winery tasting rooms, dining rooms and wine shops.

This year’s City of Riesling, like its predecessors, is taking place immediately preceding the Traverse City Film Festival. To help visitors more easily find accommodations, next year’s event is scheduled for June 10–11. Then in 2019, the event will move to Geneva, New York, before returning to Traverse City in 2020 and 2021. The plan is for this area to host it for two years, then hold it in another wine-making region for a year before returning to Traverse City.

Danielson believes that moving it to other locations will help showcase the event and ultimately this region as well. “People in Geneva and the Finger Lakes want to do it there. Oregon, Canada—they recognize its importance. We’ll always do at least one in three or two in three (in Traverse City). We’re creating an event that brings the world here. We’re expecting it to have a far-reaching effect.”

To register or get more information, go to CityofRiesling.com. You can also find out more at facebook.com/cityofriesling.